Money, Egos & Speed: Voices from the past

In March, I was invited to the launch of the Beaulieu Heritage Museum’s new motorsport exhibition. Spring is a great time to drive through the New Forest and so I gladly accepted the chance to once again visit what has now become one of Britain’s top visitor attractions.

Although motorsport has been my career for the last 40 years, it wasn’t just the new collection of race cars that appealed to me. Wandering around Beaulieu’s superb collection of road cars from the 1950’s and 60’s is always a pleasure, as they evoke so many happy family memories from my childhood and teenage years. I can still recall the excitement and fervour with which our first ever holiday in Spain was planned, sitting around the dining room table, maps everywhere! In 1960, even in a brand new Hillman Minx that was my father’s company car, the two-day drive from London to the Costa Brava in Spain was no small undertaking and detailed planning was essential. The car ferries in those days weren’t the big modern versions that we take for granted today and French and Spanish hoteliers rarely spoke English, so the journey was, in effect, quite an adventure…but enough of my childhood memories, let’s get back to my visit to Beaulieu.

Apart from wanting to see the new motorsport exhibition itself, there was another reason for accepting the invitation. It offered a rare chance to listen to two great motorsport raconteurs chatting about their careers in the business.

I first met Murray Walker in 1974. I was racing a Formula Ford at Brands Hatch and Murray did what he does best, coming over to this unknown rookie and asking about my racing programme, copiously making notes for his TV broadcast.

However, I guess I didn’t want to rock the boat at that stage in my presenting “career”, so I tried to do the best that I could, which I recognise was not good enough.

The name Stirling Moss had been very familiar to me back in my school days. He was like a character out of the Boy’s Own comic, a hero to so many of us. The whole world knew Stirling Moss in his heyday as a racing driver and today, of course, he’s still one of the most widely recognised doyens of our sport.

The format of the launch was that these two characters would reminisce for the best part of an hour in front of a VIP audience about their careers. It was a chance not to be missed. I wasn’t disappointed; it was great to hear about some of the incredible races that Stirling won, often in extraordinary circumstances. Winning in Spa with tyres that had wide white strips of disintegrating canvas showing around the entire circumference and fooling his fellow competitors into thinking he would stop for a tyre change by getting his mechanic (alias race engineer today!) to wander around the Pits with a small trolley jack under his arm. Amazing stuff! But I must admit that the hair stood up on the back of my neck when I heard the great man tell Murray that throughout his career he’d never once raced wearing seat belts! Can you imagine that? Scary stuff from a safety point of view, but think about trying to control a car on the limit when you yourself are moving around in it!

The highlight of the “interview” between Murray and Stirling came when they had rather gone off at a tangent on a particular topic. Murray looked at his notes and said to Stirling “We’ve rather drifted off the point that we were discussing, let’s get back to that now…. Can you remember what it was?” Stirling looked at Murray for a few seconds and said “No I can’t!” They then both turned to the audience and asked, “Can any of you remember what we were talking about?”

The audience response was amazing; together with Murray and Stirling, everyone just burst out laughing at this wonderful moment of slight frailty from two doyens of the sport with over 170 years of experience of life between them. A moment to savour!

At 91, Murray has lost none of his skills. Few motorsport or even sports commentators have reached the level of recognition that he has enjoyed for decades, but it set my mind working as to whom else I would put into that category. There weren’t many!

Brian Jones, who for many years entertained the crowds at Brands Hatch, commentating on local, national and international events at the famous Kent circuit would be one of those I’d call superb. He too had a wonderful rich voice and a genuine interest in all categories of racing. As a Brands Hatch regular in my early racing years of my own racing career, it was always a pleasure to hear Brian keeping the crowd aware of what was going on through each race in a relaxed, but highly enthusiastic and entertaining style.

Years later, in 1994, at the launch of the Motorsport Industry Association in London, I felt very privileged when Brian Jones agreed to compere what was an important event for me. I knew I could rely on him to do a greatjob on the day and he did, as always.

Another commentator with a distinctive voice is, Simon Taylor. You can never mistake his dulcet tones, narrating in an analytical style without talking down to his audience, the events that are occurring. As with all great exponents of their art, his passion for cars and for the sport comes across whenever you hear him.

In 1991, as Lola F1’s Marketing Director, I was invited to become a “pundit” on Sky TV’s coverage of Indycar racing (CART). Sky broadcast live on a Sunday evening coverage of races via the ABC and ESPN networks. The regular presenter was one of my fellow Formula Ford racers from the 70’s, Tiff Needell. It seemed that we formed a good partnership on screen and were often joined by Tyler Alexander, the former McLaren Director and by Nigel Roebuck.

One of toughest broadcasts involved coverage of a much talked about Indy 500 race, when the air and track temperature dropped dramatically on the morning of the race. It resulted in a record number of yellows belong shown for accidents caused by cold tyres. In fact, the pole-sitter spun as he came up to the start line and ploughed head first into the concrete wall in front of the pits.

Every time there was a yellow flag, the ABC network ran commercials for their American viewers and UK viewers returned to the Sky studios where we would have to chat for up to five minutes. I recall that that race lasted the best part of 5 hours and it took a lot of resolve to continually find new and interesting things to talk about each time we were called into action. I think we did OK as there were no viewer complaints, but it was a tiring and quite stressful scenario.

I really enjoyed the TV work and when Tiff was away racing, I would take over the presenting of the programme. You can imagine my delight at then being invited by Eurosport to be the back-up commentator for its F1 coverage. John Watson and Allard Kalfe were at the track, but they would often revert to Eurosport’s Paris studios and involve me in support discussions. It was great experience for me and when Nigel Mansell left F1 as a World Champion and moved across the water to race in CART with Newman Haas Racing, I was invited by Eurosport’s producer to commentate on the season’s opening race, which was in Australia. Unfortunately Eurosport wasn’t allowed to broadcast it live, only delayed highlights. This meant that I would add a commentary, voice-over style, to the highlights for broadcast later on the Sunday, UK and European time.

I arrived in the Paris studio on the Saturday, so that I could watch the race feed live during the night and then add my voice over to the edited highlights the next morning. Or so I thought! What happened in reality was very different and did me no favours whatsoever.

For some reason, I was told that I couldn’t do a voice-over, but would instead “commentate” live on the highlights broadcast, when it was shown on the Sunday. Somewhat dismayed, I asked if I could see the edited programme contents in advance, so that I could prepare my commentary, based on what was being shown and what had been omitted. I was told that this wouldn’t be possible.

It meant that I faced the ridiculous task of commentating live on an edited version of the race that would jump from highlight to highlight, having no prior knowledge of what was being shown.

I realise now that I should have simply refused to do that unless I was given a prior showing of the footage. However, I guess I didn’t want to rock the boat at that stage in my presenting “career”, so I tried to do the best that I could, which I recognise was not good enough. I suppose you could say that I was in a damned if I do, or damned if I don’t situation. I really didn’t enjoy the experience one iota.

However, I did receive an email after the broadcast from McLaren’s Teddy Meyer. He explained that he’d worked out the circumstances under which I was trying to do my job and assured me that even Murray Walker couldn’t have done any better. Although his email was much appreciated, it didn’t really make me feel any better and I will always believe that I missed a great opportunity to progress my broadcasting endeavours. Such is the rich tapestry of life. 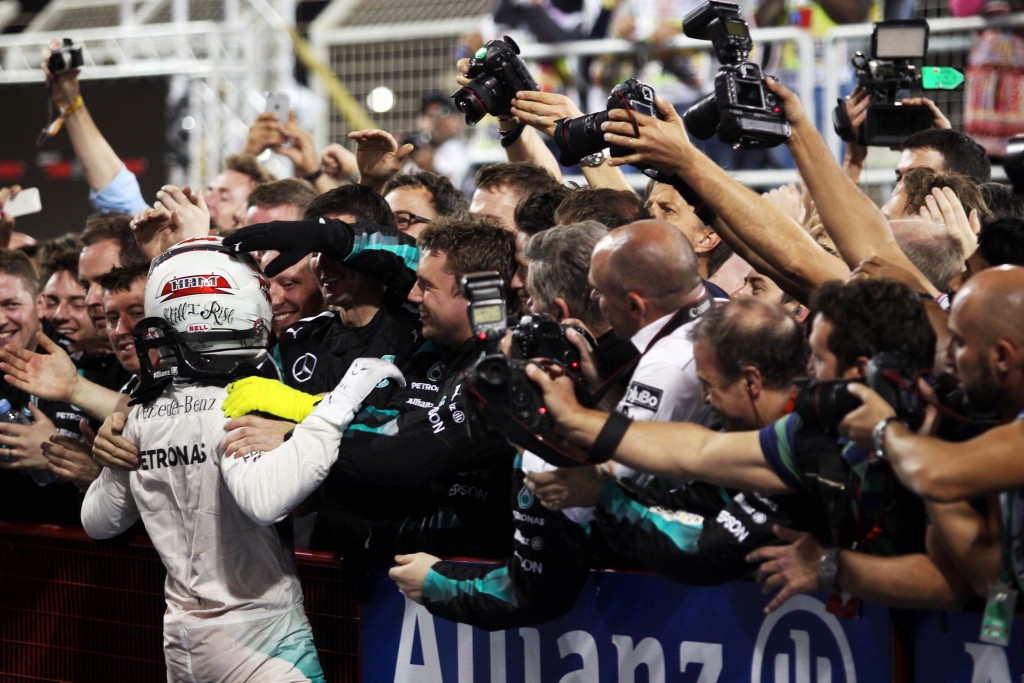