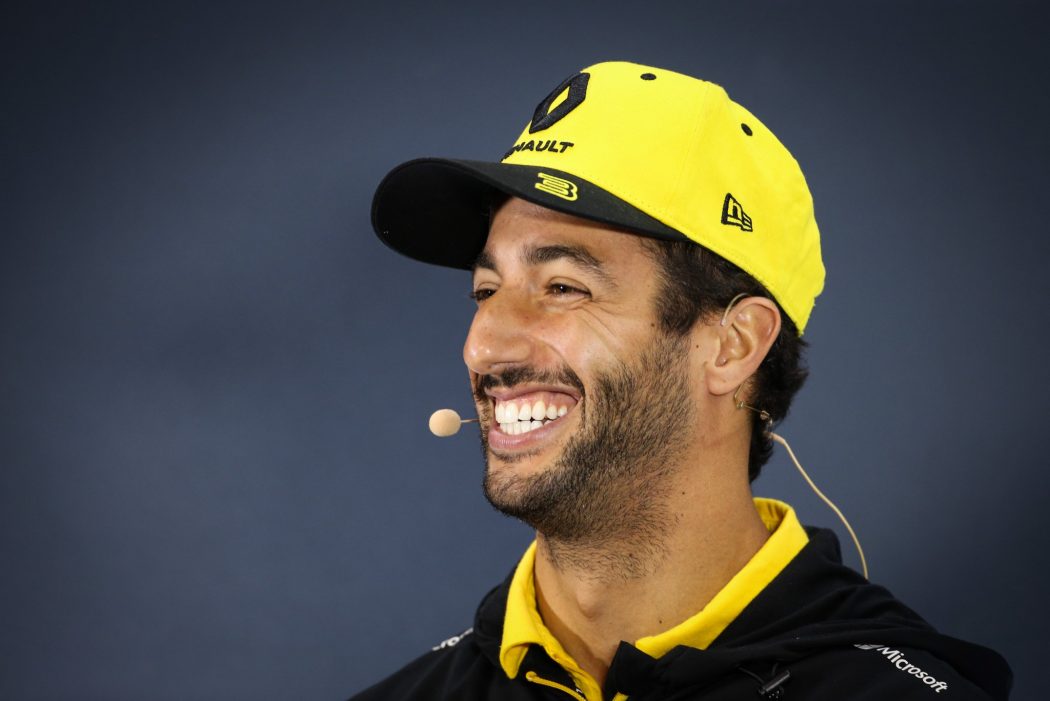 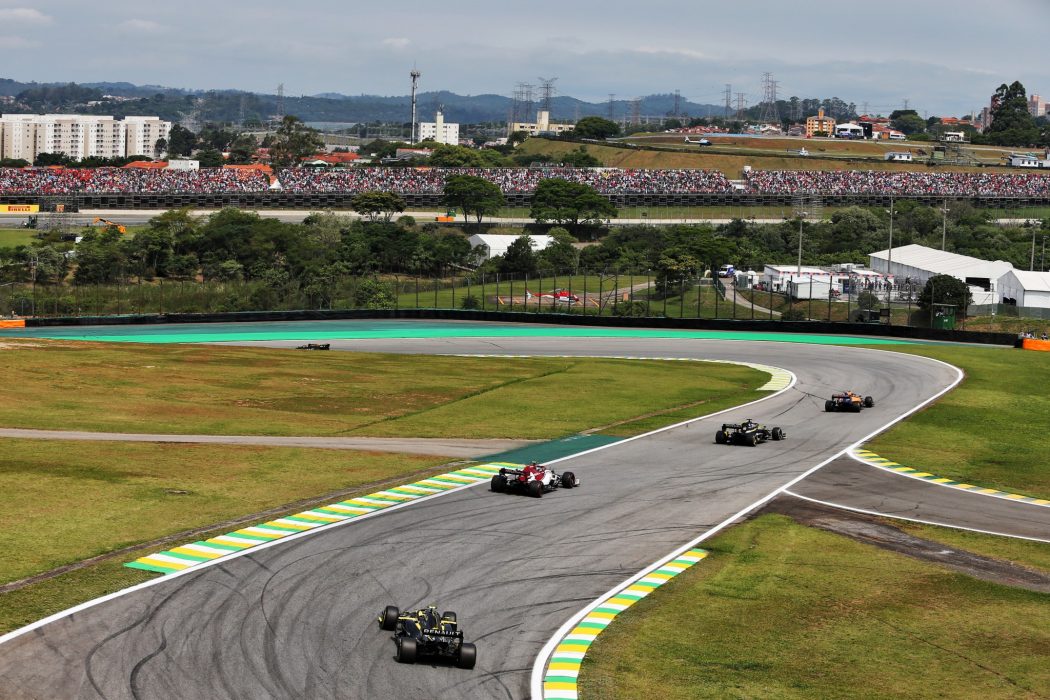 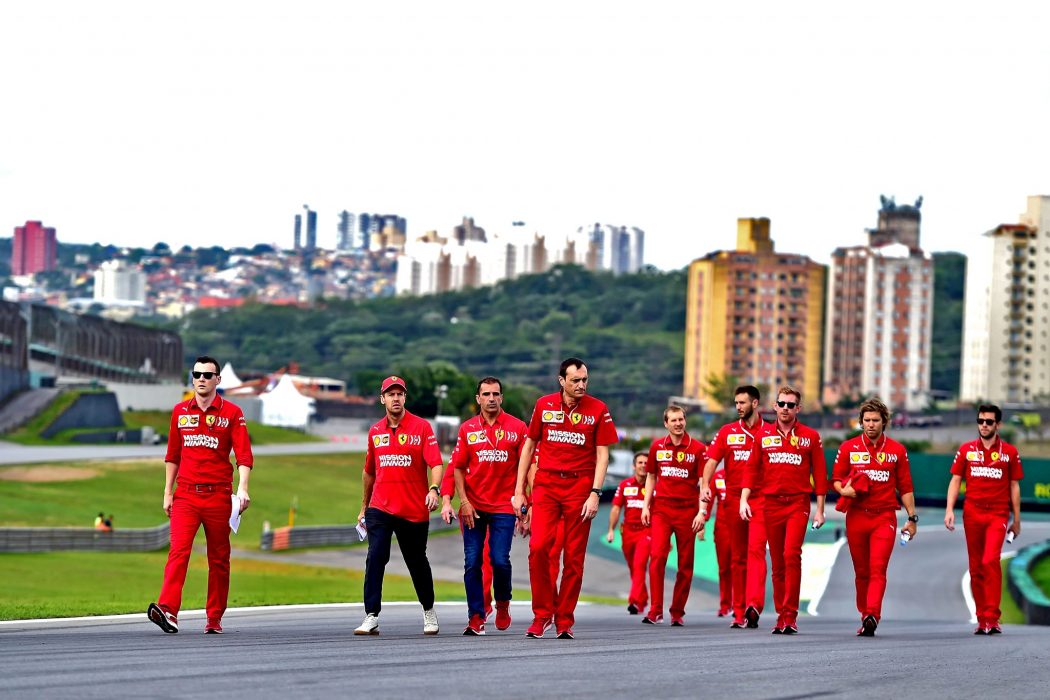 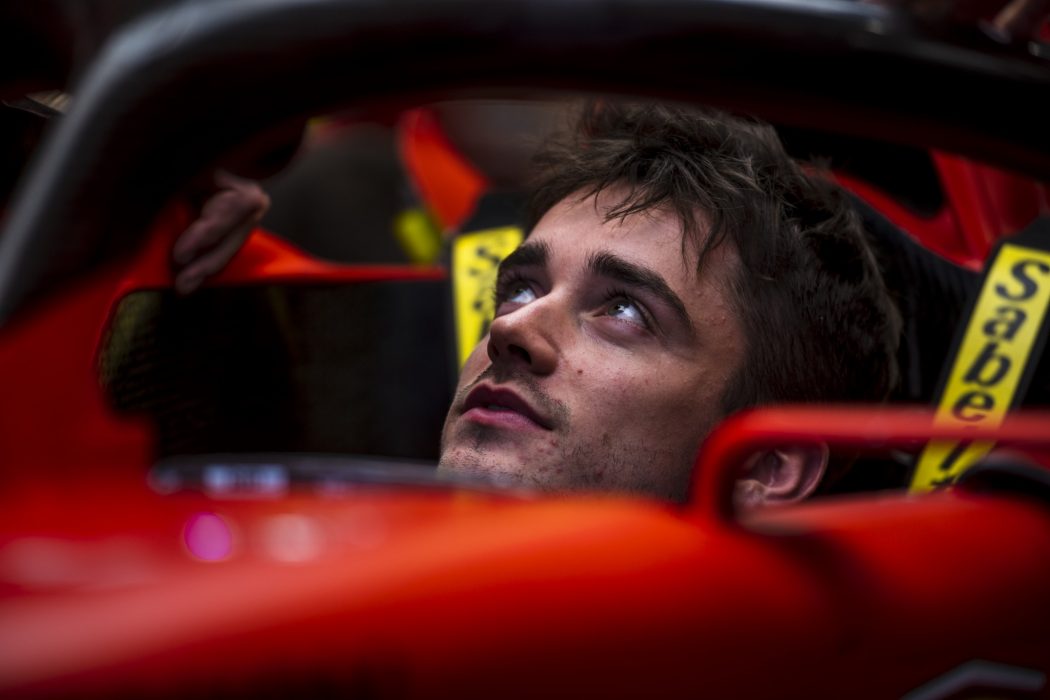 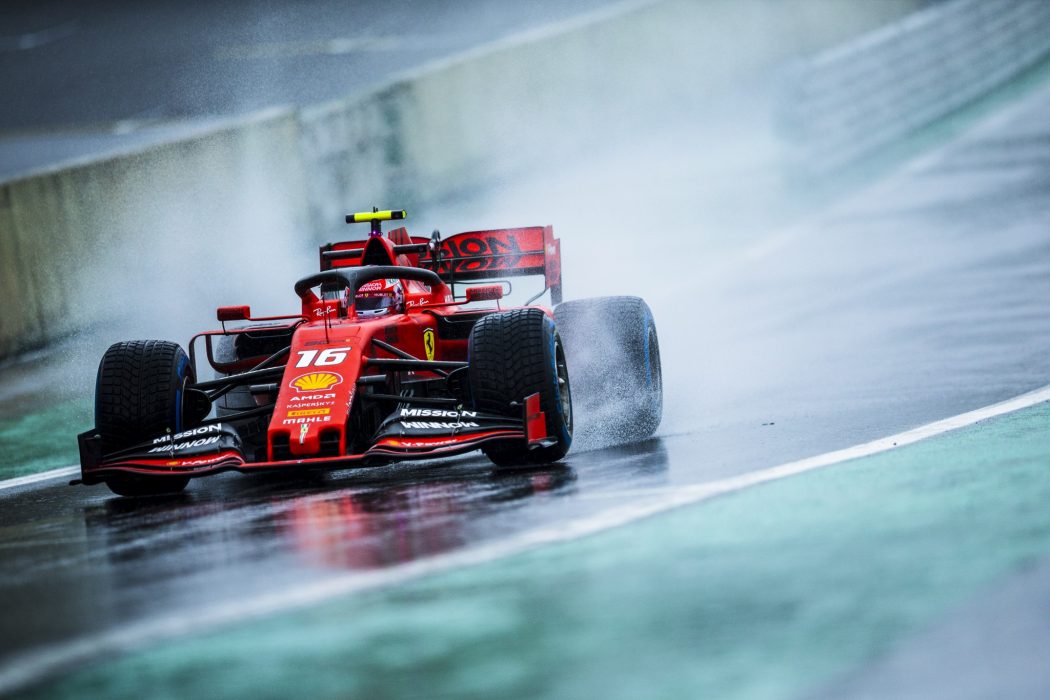 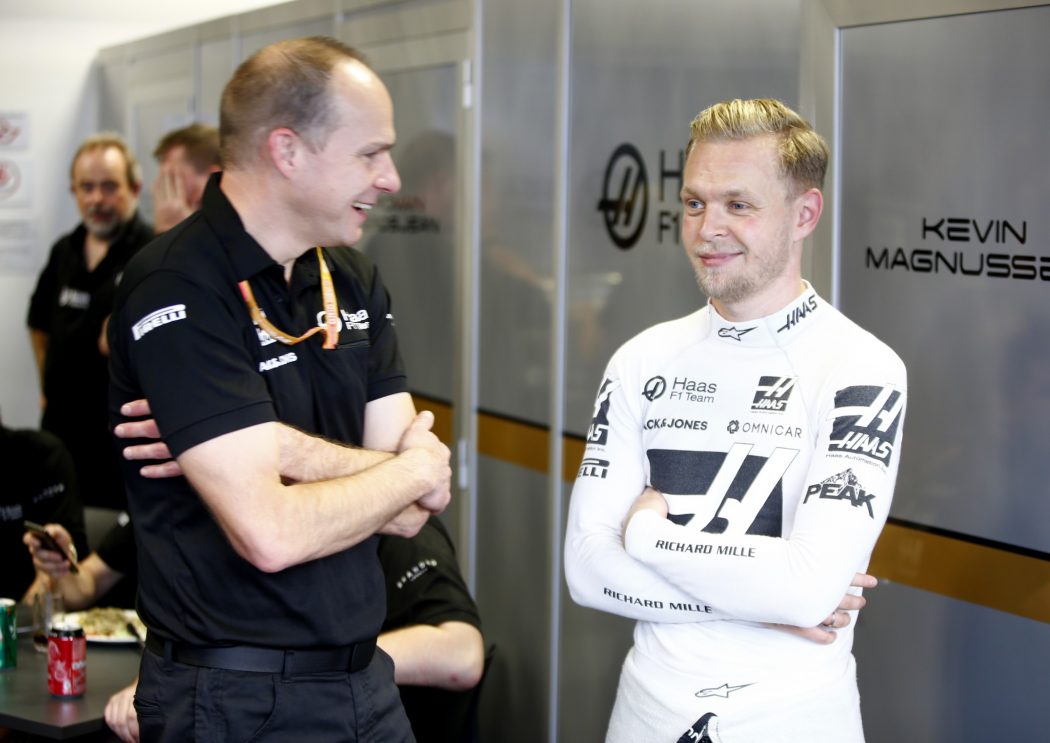 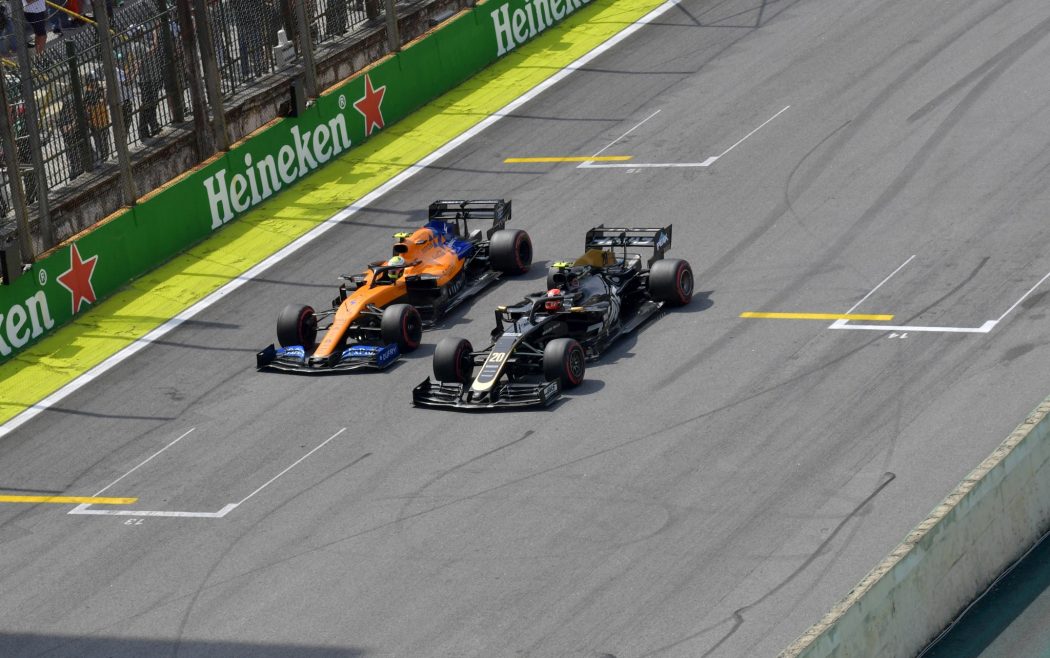 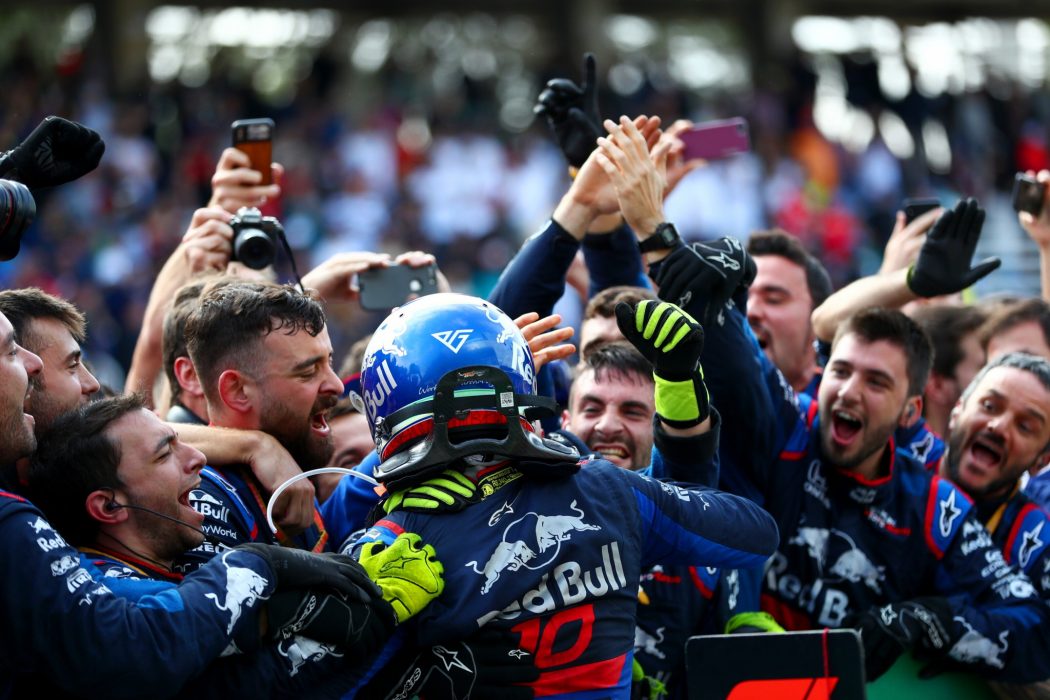 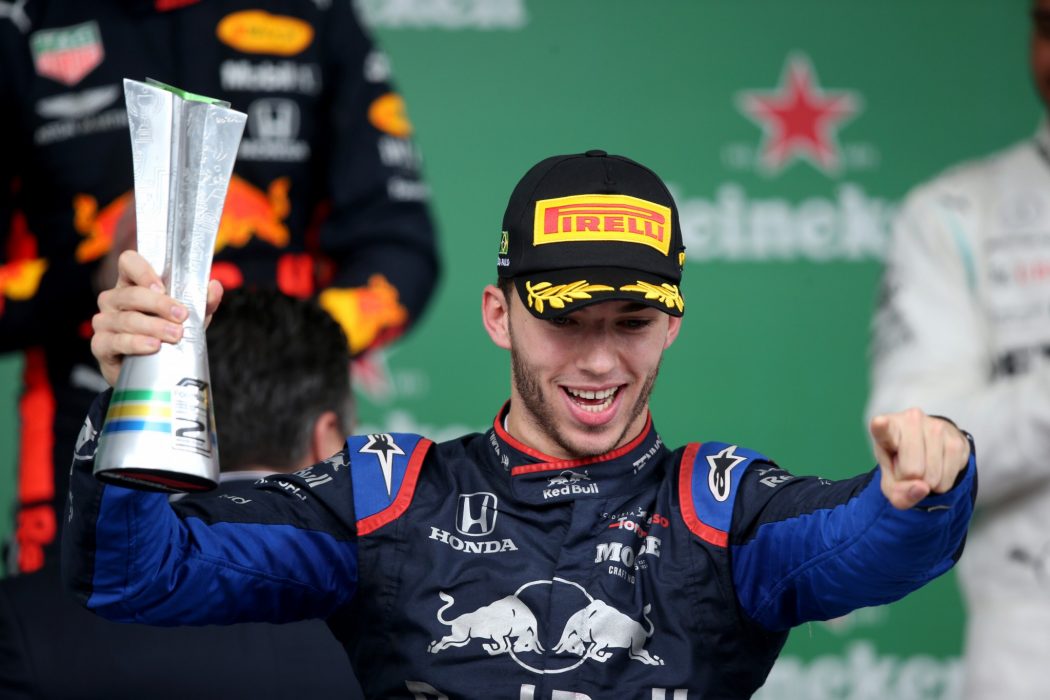 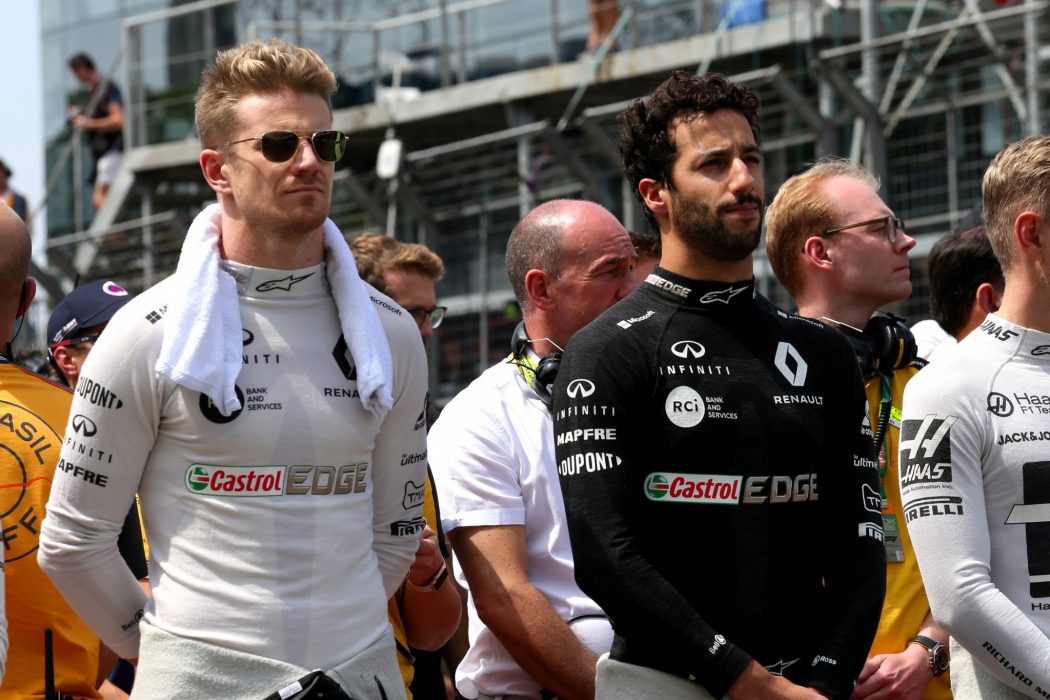 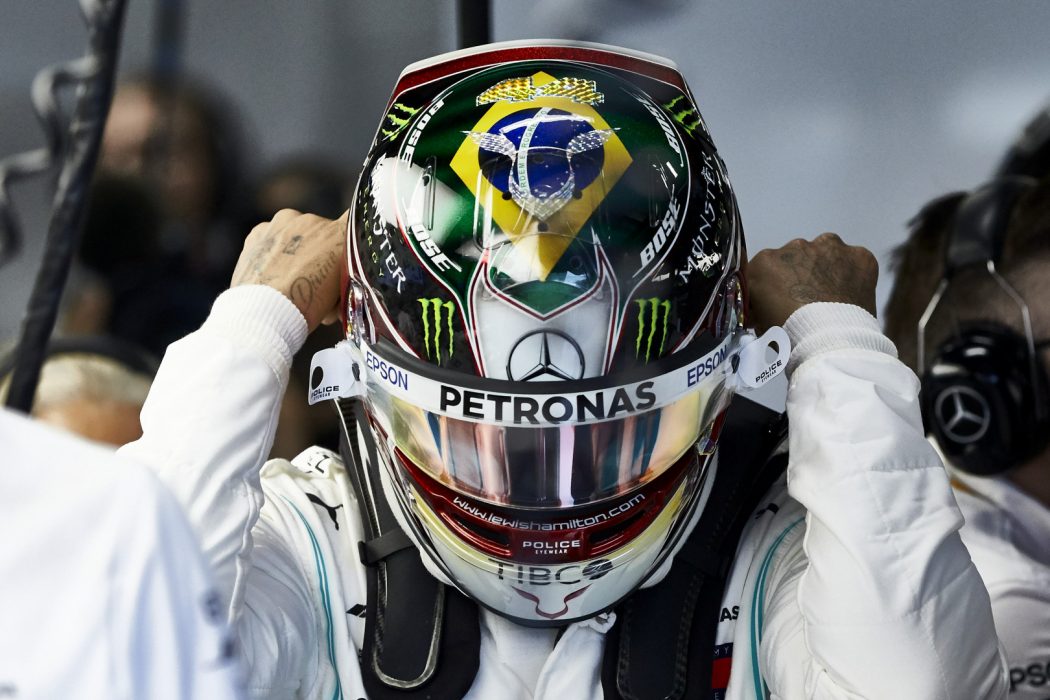 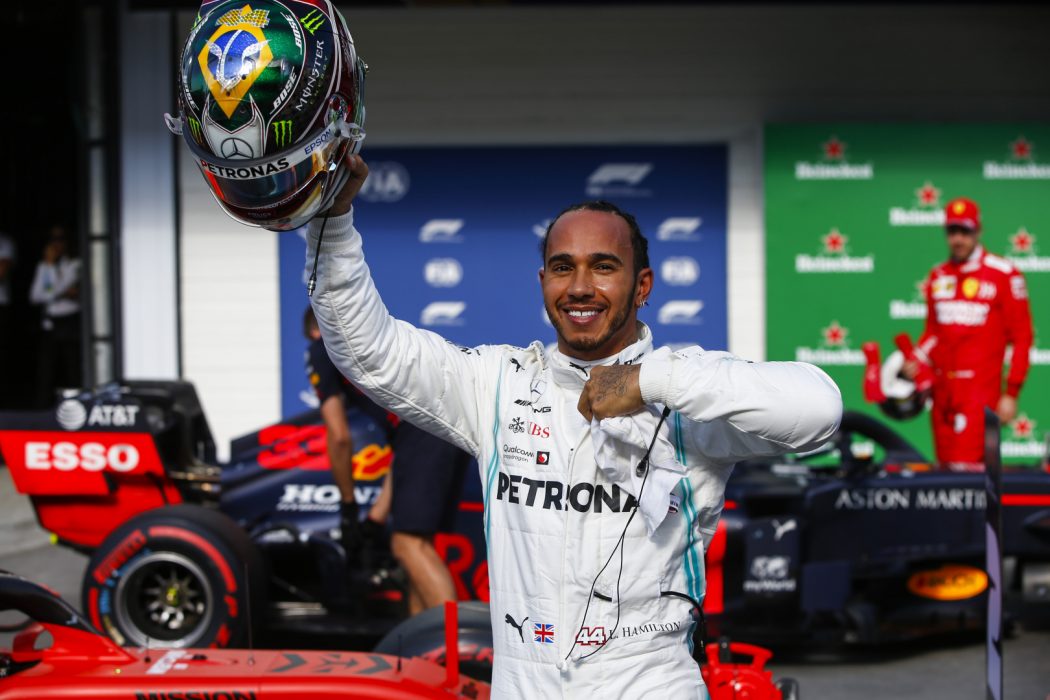 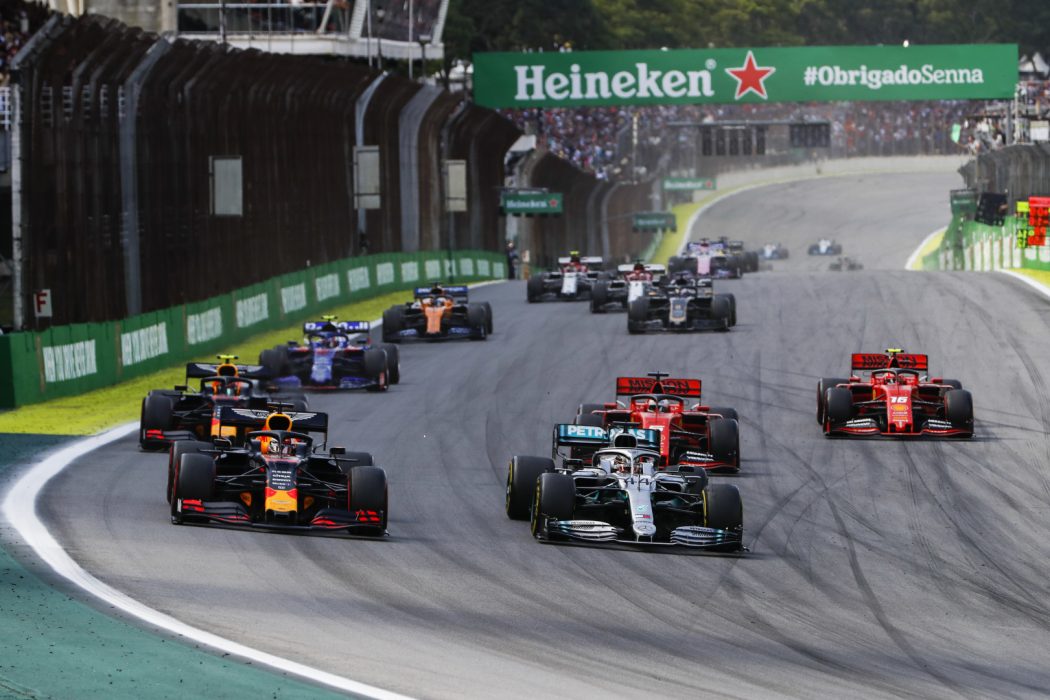 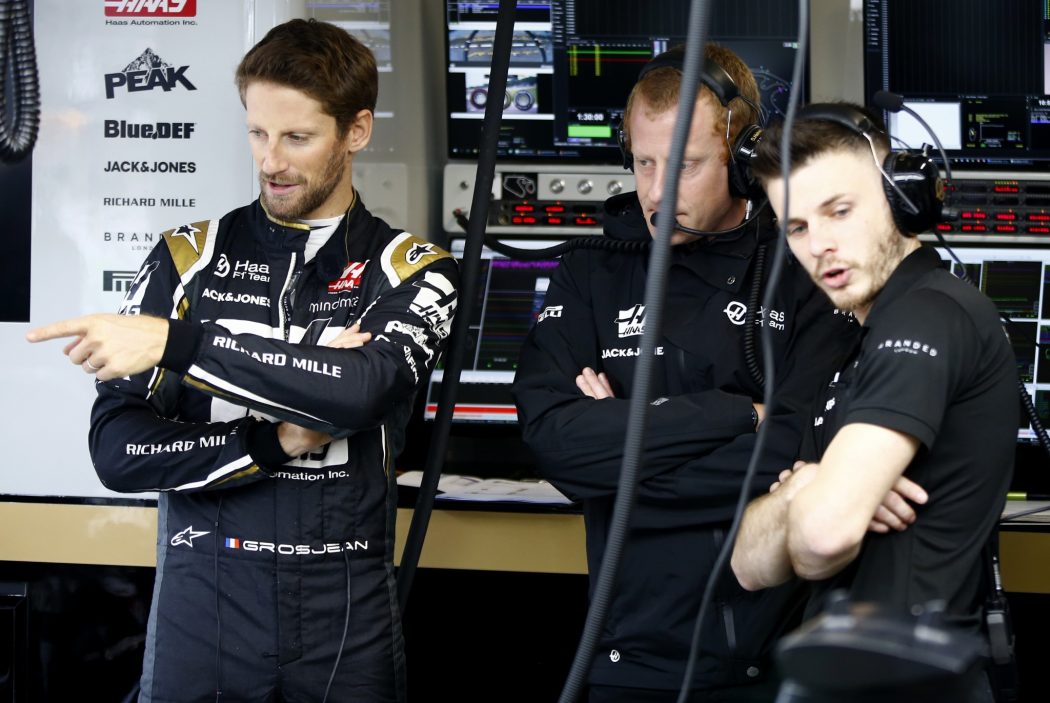 Having come agonisingly close to winning at Interlagos last year before his coming together with Esteban Ocon, a brilliant performance from Max Verstappen saw him convert pole position into his third win of the 2019 season – while a mind-boggling final few laps saw both Ferraris sensationally clash and retire, and Mercedes’ Lewis Hamilton tip the other Red Bull of Alex Albon out of second, allowing Toro Rosso’s Pierre Gasly to finish a sensational P2…

Verstappen was a deserving winner in the race, having been the strongest driver across both Saturday and Sunday. But while he was taking top honours, it was the action behind in the final few laps that really caught the eye.

Following a late Safety Car brought out after a dramatic double retirement for Ferrari on Lap 66 of 71 – caused by Sebastian Vettel moving lightly over on teammate Charles Leclerc – Red Bull’s Alex Albon was looking good to take his first F1 podium.

But with two laps to go when the race restarted, Hamilton tagged Albon, leaving the Thai driver to finish P14, while Gasly was able to hold off Hamilton in a drag race to the line to claim his own first podium in F1 – with the stewards later handing Hamilton a five-second penalty for his part in the Albon incident, which ultimately dropped him to P7.

Behind, a great day for Carlos Sainz saw him make it from P20 at the start to P4, before later getting promoted to his first top-three finish after Hamilton’s penalty. He finished ahead of the Alfa Romeo pair of Kimi Raikkonen and Antonio Giovinazzi, with Renault’s Daniel Ricciardo sixth, Hamilton seventh, McLaren’s Lando Norris eighth, while Racing Point’s Sergio Perez and the second Toro Rosso of Daniil Kvyat rounded out the top 10.

A power unit failure for Valtteri Bottas, meanwhile, saw the Finn retire from the action on Lap 52, marking Mercedes’ mechanical retirement since Austria 2018.

The 2019 Brazilian Grand Prix practically crammed half a season’s worth of action into the final 10 laps. And while Verstappen made his eighth career win look relatively straightforward for him, it was the frantic action going on behind that will likely see the 2019 race at Interlagos remembered as a classic.

Off the line, if Verstappen was nervous about having two drivers, in Vettel and Hamilton, with a combined total of 10 titles starting behind him, he didn’t show it, making an ideal getaway from pole to lead comfortably into Turn 1. Vettel was aggressive, meanwhile, moving sharply right to cover off Hamilton. But the newly re-crowned Mercedes driver had enough confidence to hang out around the outside and claim P2 through the Senna ‘S’, as Vettel slotted in behind him.

Further down the order, Leclerc’s plan to scythe through his midfield rivals from 14th on the grid was halted briefly on the opening lap by a plucky Lando Norris, who, having been passed by the Ferrari in Turn 11, cheekily nosed back ahead into Turn 12, before Leclerc unleashed his pace advantage up the hill to move permanently ahead. Then the scything began in earnest for Leclerc, with the Ferrari man having moved easily past Pierre Gasly for P6 by Lap 10.

Two laps previously, the mixture of Daniel Ricciardo and Kevin Magnussen down into Turn 4 had proved predictably explosive, Ricciardo leaving his braking a split second too late, tagging the Dane’s Haas and rotating it, with Ricciardo damaging his front wing. Both drivers were able to carry on, Ricciardo stopping for a front wing before the stewards handed him a five-second time penalty. “****** idiot” was Magnussen’s own succinct judgement.

With Hamilton having pitted from second place on Lap 21, leader Verstappen followed suit on the following lap, both drivers putting on softs to indicate that they would two-stop. But as Verstappen was trundling out of the pit lane, Williams released Robert Kubica right into the Dutchman’s path, with Verstappen having to jump on the brakes before being forced to follow the Pole out of the pits. That hold-up – for which Kubica was handed a five-second penalty – was enough to allow Hamilton to take the net lead from the Dutchman.

Only briefly though. Verstappen was a potent mix of furious and inspired, and as the pair of them nipped past Leclerc on his 24-lap old mediums through Turn 12, Verstappen appeared to have enough battery power in reserve to breeze easily past Hamilton into Turn 1 and reclaim that net lead. “Give me information when my ****** battery’s dead,” yelled Hamilton at engineer Pete Bonnington.

Once the frontrunners had all pitted, then, it was Verstappen pulling away from Hamilton – at a rate that was enough for Hamilton to question both Mercedes’ decision to put him on softs and whether he had an engine issue – with Vettel on mediums ahead of Bottas on hards in fourth, Albon on mediums and Leclerc on hards sixth.

Behind, Gasly was impressively holding onto P7 in the Toro Rosso, ahead of the equally impressive Alfa Romeo pair of Kimi Raikkonen and Antonio Giovinazzi in eighth and ninth, while Sergio Perez was having another great race, having climbed from P15 to P10.

Hamilton stopped again for mediums on Lap 44, with Verstappen covering his move a lap later. Red Bull’s silky pit work meant that Verstappen was held for 1.9s to Hamilton’s 3.3s, allowing him to re-take the race lead when Vettel pitted for softs on Lap 50.

Having repeatedly tried and failed to get past Leclerc, Lap 51 also saw some tell-tale smoke puff from the rear of Bottas’ Mercedes. A lap later, and his race was done. With a Safety Car brought out as the W10 was cleared away, Verstappen dived once more into the pits for softs, emerging in P2 as Hamilton stayed out. That meant that, with just over 10 laps to go, Hamilton finally had the lead from Verstappen – but he wasn’t optimistic, telling Bonnington: “I’m going to be a sitting duck”.

He was right, with Verstappen passing him immediately into Turn 1 on the Safety Car restart on Lap 60, as Albon brilliantly muscled past Vettel for P3. Then on Lap 66, all hell broke loose…

A fine move from Leclerc on his teammate saw him get past Vettel for fourth. But there were then shades of Turkey 2010 as Vettel got back ahead on the run down to Turn 4 and jinked slightly over on Leclerc. Leclerc’s front wing tagged Vettel’s rear-left tyre, causing enough damage to take both drivers out, and bringing out another Safety Car – with Hamilton taking the decision to make another dive into the pits for soft tyres, leaving him fourth.

With acknowledged froideur having reigned between the two drivers at Ferrari recently, this, it seemed, might have been the starting gun of full-on civil war at Maranello.

Ferrari’s loss was F1 fans’ gain, though, with a beautiful final two laps in prospect once the Safety Car had pulled in – and after Lance Stroll had also retired with front-right suspension failure – Verstappen heading Albon, Gasly, Hamilton and Sainz.

At the restart, Verstappen was gone, streaking away to victory, while Hamilton was immediately past Gasly for P3. But then, Albon left too inviting a gap for Hamilton into Turn 10, with Hamilton tagging the Thai driver, swinging him round and demoting him to P14 by the race end – a cruel finish that robbed him of what would have been a certain first podium.

It was thus left to Gasly to defend from a rampaging Hamilton – and he did so brilliantly, holding off the Briton in a thrilling drag race to the line on the final lap to claim P2. Ironically that meant that it was Gasly, and not Albon – the man who replaced him at Red Bull – who was the first of the two to claim an F1 podium, and the second for Toro Rosso this season. Gasly’s screams into his radio at the race end told you all you needed to know about the release he felt, after what’s been an emotional rollercoaster of a year for the Frenchman.

Hamilton, meanwhile, was later judged by the stewards to have been at fault in the Albon crash, with a subsequent five-second penalty (and two points on his licence) dropping him to P7.

That meant that Sainz, having done a terrific job to make a one-stop work and climb from the back of the grid to fourth by the race end was ultimately classified third, meaning he took his own maiden F1 podium. Meanwhile, having taken just three points since the summer break, it was a red-letter day for Alfa Romeo, with Raikkonen and Giovinazzi taking a haul of 22 points as they were classified fourth and fifth, the team’s best result of the year.

Yet another strong race day performance from Daniel Ricciardo saw him shake off his Magnussen contact to take his third top-eight finish in a row as he claimed P6 after Hamilton’s penalty, while Norris, Perez and Kvyat rounded out the top 10.

So, for Verstappen, it was redemption after his near-win back in 2018. But aside from a fine performance from the Dutchman, the 2019 Brazilian Grand Prix will be remembered for what was a truly explosive finale – and perhaps one of the most frenetic in F1 history.