Lewis Hamilton clinched second place in changeable conditions in Imola despite hitting the barrier on lap 31 and falling to the ninth position before the race was restarted on lap 34 following a red flag. Valtteri Bottas suffered a DNF after an incident with Williams’ George Russell on lap 33.

Lewis set the fastest lap of the race to claim the bonus point on offer.  he (44 points) leads the Drivers’ Championship by 1 point from Max Verstappen (43 points) with Valtteri (16 points) in P5. The Mercedes-AMG Petronas F1 Team (60 points) leads Red Bull (53 points) by 7 points in the Constructors’ Championship.

Considering I was facing the barrier at one stage, then a lap down, yeah, it was a difficult day in that regard. I had some really good pace in the rain and was catching but just a little bit impatient, maybe, with the backmarkers. I’m only human so these mistakes happen. I’m grateful that I was back in the race and could hunt down and get back to second. The car had a rough time today. I started first, should have been first at the finish but these things are sent to test us and we’ve got a great battle on our hands. Game on.

I’m okay physically. It was a half-decent shunt but obviously could have been a lot worse at that speed. George got close and decided to go for a move. Obviously, the track is quite narrow, there is only one dry line and he went for the outside, there was space all the time for two cars but he obviously lost the car and hit me. I haven’t spoken to him so far: I couldn’t hear a thing that he was on about and obviously we will have a different perspective on it. It was a tough race until then, from where I started it wasn’t easy to make ground. But I need to take whatever positives I can from this weekend and move on.

Leading the Championship with the fastest lap is one thing but what actually gives it a silver lining or positive connotation today is that we seem to have a really quick race car.

Unfortunately, the crash between George and Valtteri was unnecessary. Valtteri had a difficult first 30 laps and shouldn’t have been there but George should have never launched into this maneuver considering that the track was drying up. It meant taking risks and the other car is a Mercedes in front of him and in any drivers’ development as a young driver you must never lose this global perspective. Lots to learn for him I guess.

Apart from that, we had all highs and lows from the incident in the first corner which cost us two-tenths in aero performance on Lewis’ car. Then we had Lewis hitting the barrier on lap 31. The recovery drive from Lewis after the race restarted was really brilliant, ten out of ten.

Overall, today was very difficult to judge because of the circumstances but we had a very good car today in the wet and in the drying up. We are slowly starting to understand it but according to the data, we are still not having a car and power unit that can match the Red Bull Honda.

On lap 31 it was difficult to imagine how things could get any worse. We had Lewis stuck in the gravel with a broken wing and Valtteri out with a massive amount of damage. So, leaving here still in the lead of both championships is quite a relief and I suppose we should be grateful for that.

For Lewis, it was very much a race of two halves. The early part was defined by the damage to the front wing after the contact with Max – that improved slightly when the footplate came away completely but we still had a chunk of load and balance missing. As such, we were a bit surprised when Lewis was able to close in on Max towards the end of the intermediate stint. The transition to dry was okay, the warm-up was a challenge and I think we look worse than our competitors in this regard but as we didn’t have time to change the wing it was always going to be a struggle to put Max under pressure. That became a bit of a moot point when Lewis slid off passing some traffic and lost a load of time and positions. The suspended race allowed us the chance to repair the car and in the final stint, we saw what it was capable of. It was a great recovery by Lewis and an impressive fastest lap.

Valtteri’s day was even more difficult. He was finding the warm-up more of a challenge than Lewis, struggling mainly with rear grip. That was the case on both inter and slick tyres but on the transition to dry it was particularly bad. He got swamped by a few cars and ultimately, that was what started the events that triggered the crash with George and the end of this race. Overall, a frustrating weekend and one where we have plenty of areas that we need to look to for improvement. 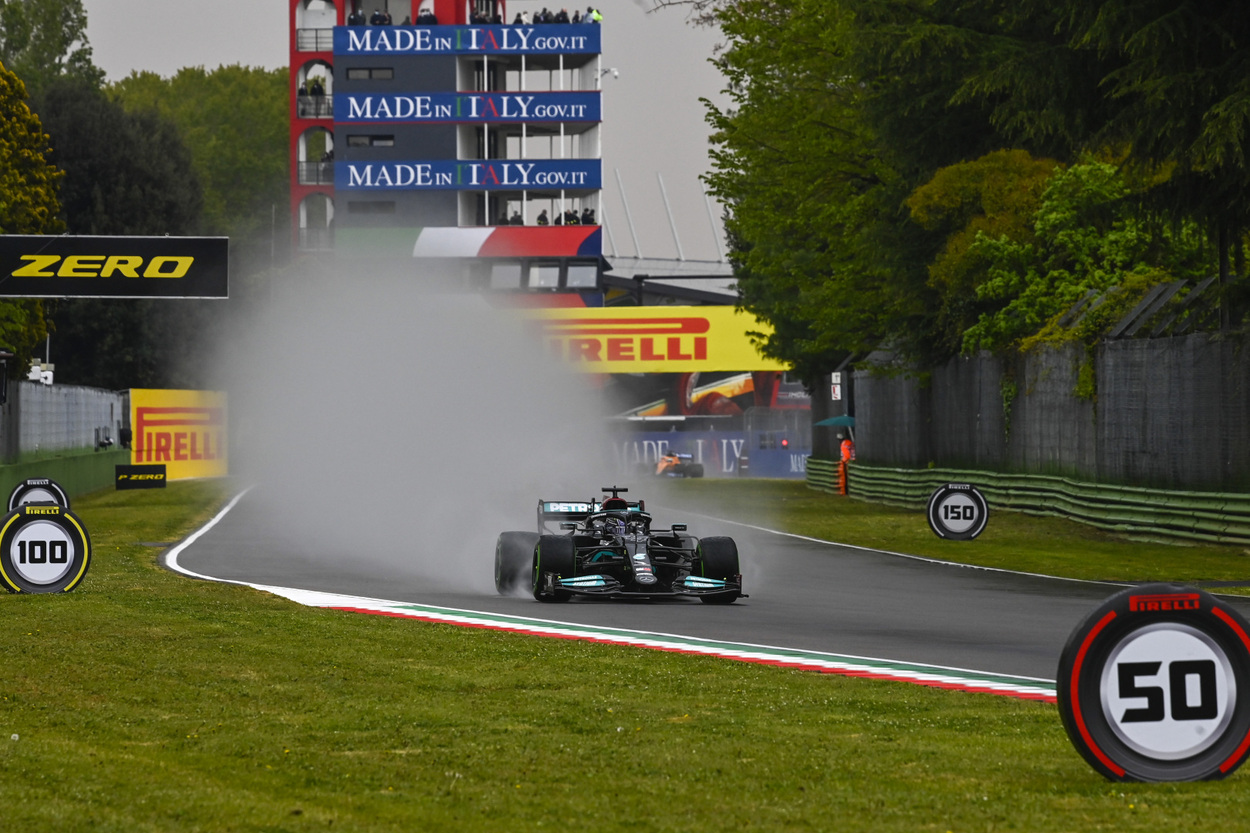 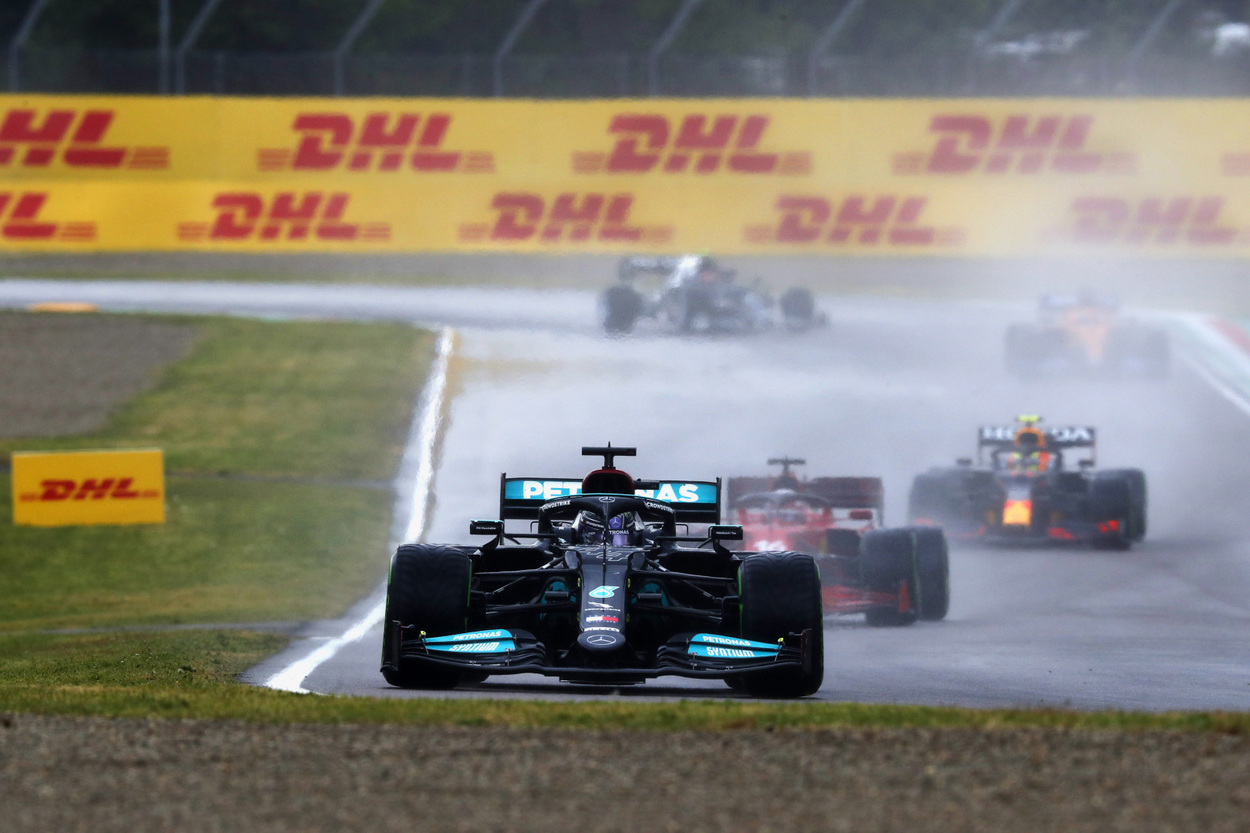 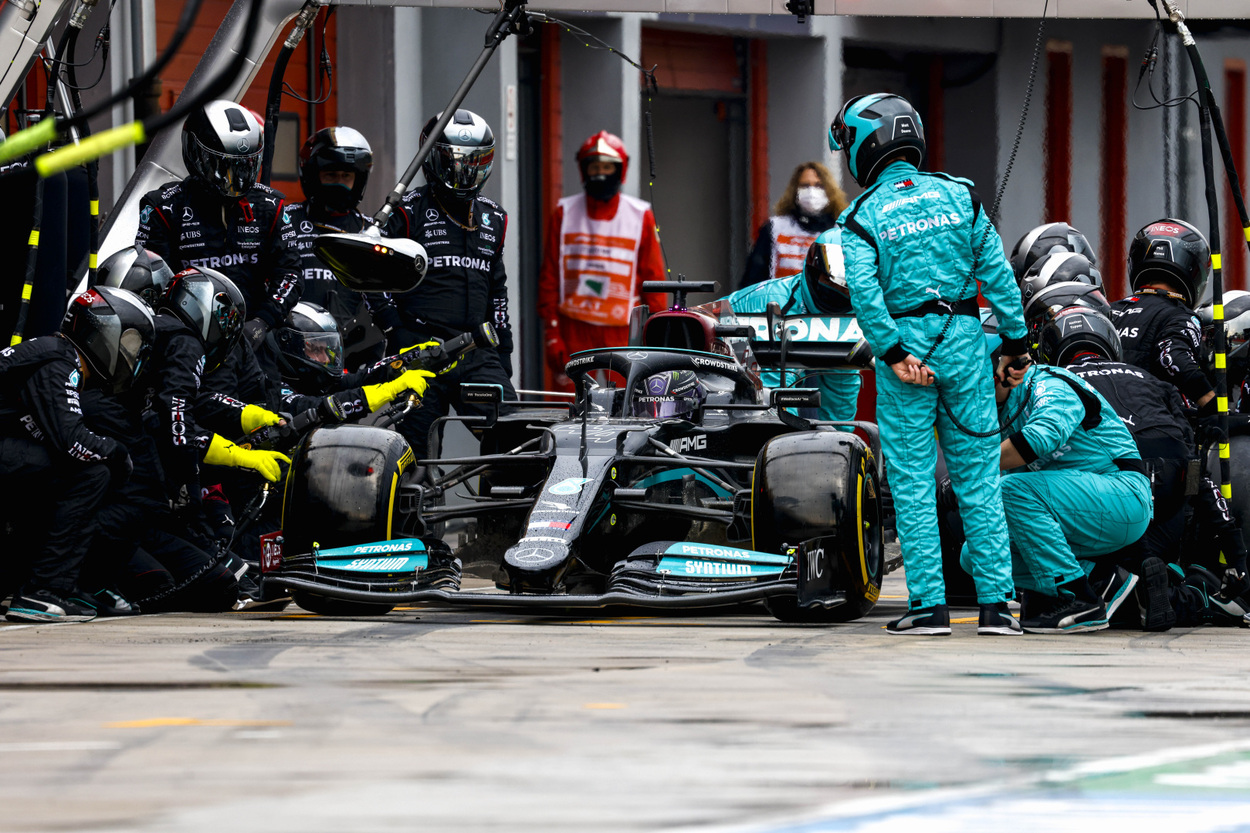 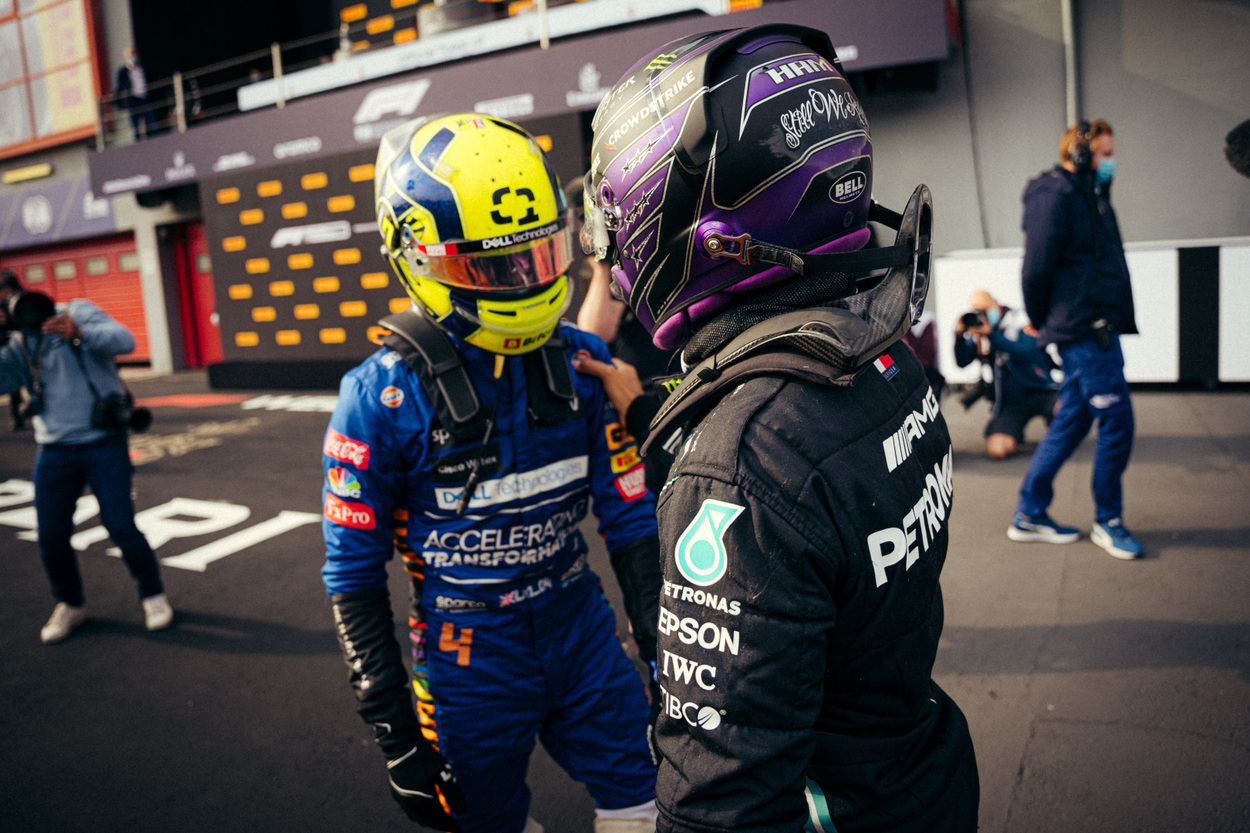 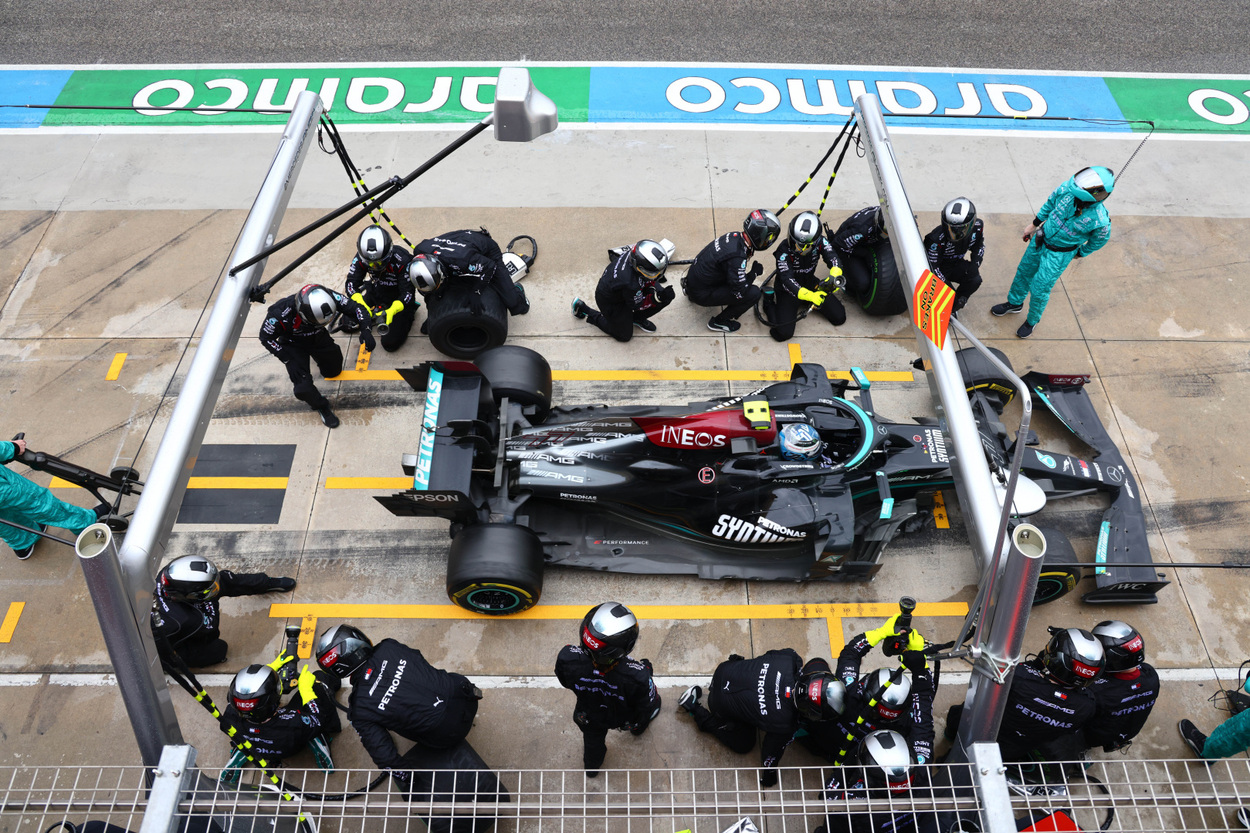