Max Verstappen won the 2022 Formula 1 Abu Dhabi Grand Prix in comfortable fashion – but Ferrari’s Charles Leclerc took P2 to finish ahead of Sergio Perez for second in the championship.

Verstappen fended off Perez into Turn 1 and swapped his mediums for hards on Lap 20, with the Dutchman using hard tyres until the end to take his record-extending 15th win of the season.

As for Perez and Leclerc, who were tied on points for P2 in the championship heading into this race, they produced a nail-biting battle. Perez pitted early for both of his stops, while Leclerc reacted by extending his second stint and ensuring a one-stop strategy. The Red Bull driver closed in on the Ferrari with four laps remaining but couldn’t make his way past for P2, and therefore finished third and fell to third in the championship behind Leclerc.

Carlos Sainz finished fourth for Ferrari as Lewis Hamilton – who sparred with the Spaniard earlier but was forced to return P4 to the Ferrari after going wide at Turn 6 on Lap 1 – attempted a one-stop strategy but retired in the pits three laps from the end. That left Russell a lonely fifth for Mercedes.

Hamilton’s retirement promoted Lando Norris to sixth for McLaren, while Esteban Ocon was P7 for Alpine, who finished fourth in the constructors’ standings despite Fernando Alonso’s DNF in his last race for Alpine. Lance Stroll’s two-stop strategy saw him finish eighth.

Daniel Ricciardo’s one-stop strategy saw him finish ninth and just six-tenths ahead of retiree Sebastian Vettel, who couldn’t make it past the McLaren and took a single point to leave Aston Martin level on points with Alfa Romeo but behind the Sauber-run team in the standings.

Yuki Tsunoda missed out on points with a final stint on softs failing to pay off, while Alex Albon enjoyed a solid start and took P12 ahead of Zhou Guanyu and one-stopper Pierre Gasly – who began the race on softs.

Valtteri Bottas finished 15th ahead of Mick Schumacher, who finished 16th in his last appearance for Haas after taking a five-second penalty for clattering into Nicholas Latifi (who later retired). Kevin Magnussen was 17th as his one-stop strategy failed to pay off.

Verstappen, Leclerc, Perez and Vettel capped off Sunday’s race with some celebratory doughnuts as the 2022 Formula 1 season closed in Abu Dhabi – and the four-time champion bowed out of F1 with style.

Abu Dhabi provided a worthy finale to this exceptional Formula 1 season. The finishing order at Yas Marina was determined by choice of different tyre strategies. This further demonstrates how Pirelli’s work has made this year’s championship compelling and competitive. As we expected, we saw both one-stop and two-stop strategies today. Generally speaking, degradation was lower than it had been on Friday, allowing longer stints. The compound of the race was undoubtedly hard, which took most of the drivers to the chequered flag. Tuesday will be Pirelli day, with the teams all staying on to test the 2023 tyres for the first time. Even though the cars won’t be the same as those used next year and the set-up is not optimised for the new specification of the tyre, the teams will still obtain important feedback on the three softest compounds – which are best suited to the characteristics of the Yas Marina track – and the new C1.

World champion Max Verstappen won the final round of the 2022 season in Abu Dhabi. The Dutchman finished ahead of Ferrari driver Charles Leclerc and his Red Bull teammate Sergio Perez. All the drivers on the podium ended the race on the P Zero White hard.

The Abu Dhabi Grand Prix took place in partially cloudy conditions and asphalt temperatures that ranged between 31.4 and 34.4 degrees, similar to yesterday’s qualifying. The teams chose a variety of different strategies for the race. As a result of the data gathered in the preceding days, 11 drivers went for a two-stopper while eight selected a more conservative one-stop strategy.

Red Bull split the strategy for its two drivers, both of whom finished on the podium. Verstappen stopped on lap 20 to swap his starting set of P Zero Yellow medium tyres for the hard, whereas Perez stopped twice (on lap 15 and 33), running two hard stints after starting on the medium. McLaren’s Lando Norris set the fastest lap of the race on lap 44, thanks to a time of 1m28.391s using the medium. The longest hard compound stint was instead completed by AlphaTauri’s Pierre Gasly, totalling 43 laps after starting on the P Zero Red soft. 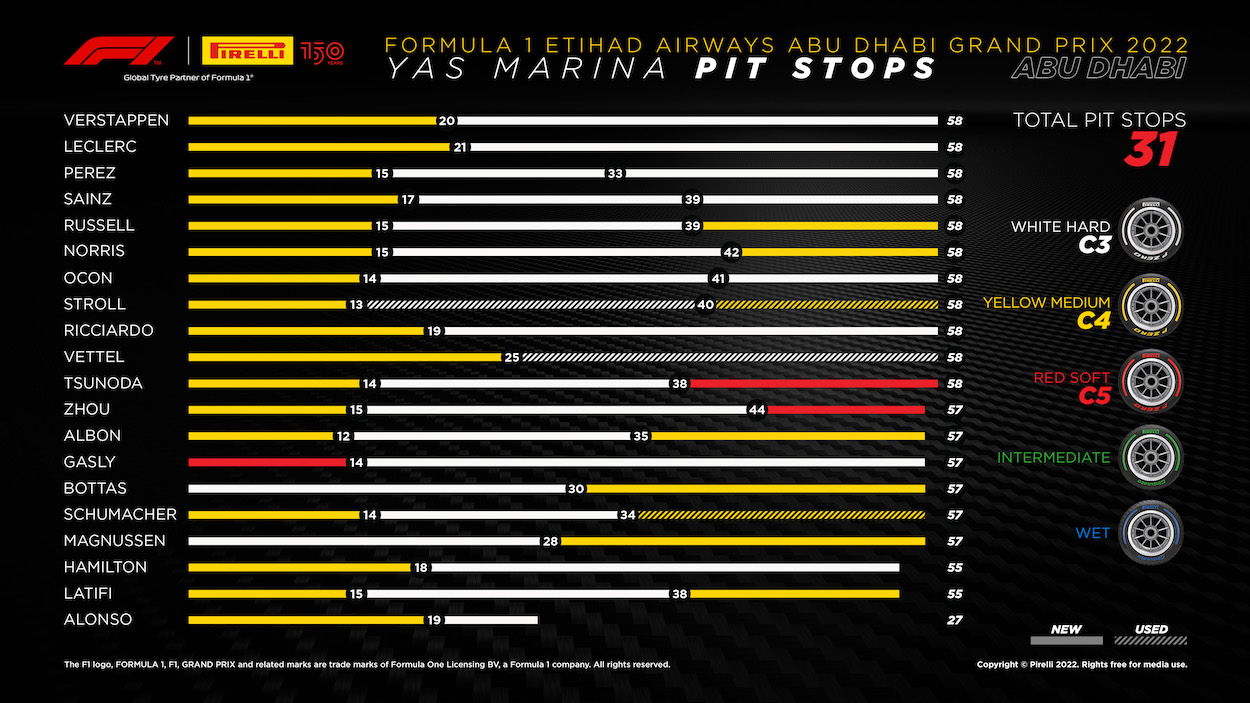 The majority of the drivers started the race on the medium compound. Gasly was the only driver to start on the soft, while Alfa Romeo’s Valtteri Bottas and Haas driver Kevin Magnussen opted to begin on the hard. Some teams chose to split their strategies, considering the minimal difference in overall race time between one and two stops in simulations. This was the case for Mercedes, which stopped George Russell twice (on a medium-hard-medium strategy) but Lewis Hamilton just once, who was on a long final stint using the hard tyre before retiring before the finish.

Ferrari was another team to adopt split strategies. Carlos Sainz stopped twice (medium-hard-hard), while his teammate stopped only once, going from medium to hard. 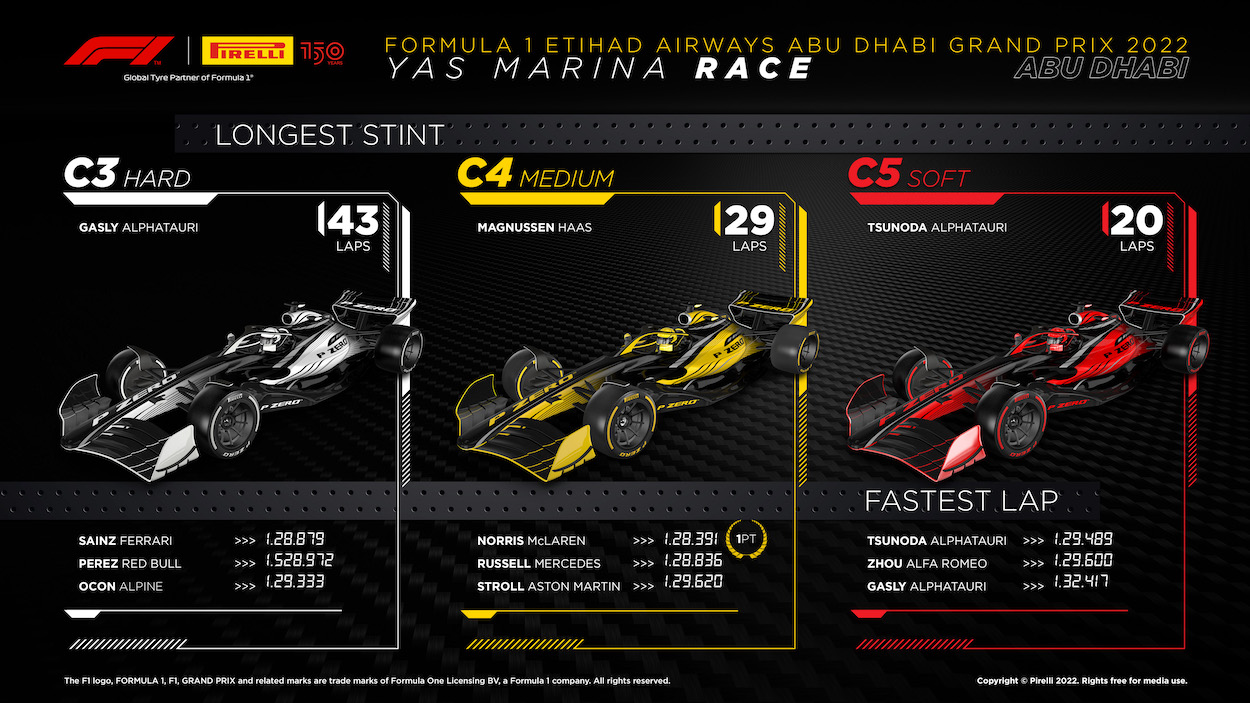