Leclerc took the lead when the Sprint winner and championship leader Verstappen pitted on Lap 12. Leclerc pitted much later, on Lap 27, and retook the lead with a pass on Lap 37. With Sainz challenging Verstappen for P2, the Dutchman pitted again on Lap 37.

Leclerc took his second stop on Lap 51 and retook the lead on Lap 53. With Sainz right on Verstappen’s tail, the Spaniard suddenly slowed – the fire at the rear of his Ferrari signalling the end of his race. That promoted Hamilton, who had battled from P8 to P4, to the final podium place.

Despite a late-race scare in which Leclerc reported his throttle pedal to be sticking, making downshifts difficult and allowing Verstappen to close to within 2.3s, he won for the first time since Round 3 at Melbourne, Verstappen missing out on a third-straight win at the Red Bull Ring.

George Russell was a distant fourth having started there, the Mercedes driver losing time in his first pit stop – a five-second penalty also tacked on as he collided with Red Bull’s Sergio Perez early on. Alpine’s Esteban Ocon rounded out the top five having started sixth, and Perez had retired soon after that Russell collision.

Mick Schumacher was the fans’ Driver of the Day, having overtaken both McLaren’s Lando Norris (P7 having served a five-second time penalty for exceeding track limits) and Haas teammate Kevin Magnussen in P8. Daniel Ricciardo made it double points finish for McLaren in P9, both the team’s drivers enjoying renewed pace with their medium-hard-hard strategy.

Fernando Alonso rounded out the top 10 from last on the grid for Alpine, having had to pit three times – a potentially unsafe release causing him to come in twice during the Virtual Safety Car caused by Sainz’s retirement.

Starting from the pit lane, Alfa Romeo’s Valtteri Bottas made it up to P11 at Alex Albon’s expense, the Williams driver having finished 12th after starting 15th.

Lance Stroll was next in the order, 13th for Aston Martin, with Alfa Romeo’s Zhou Guanyu just behind in P14. Pierre Gasly and Yuki Tsunoda struggled for AlphaTauri, finishing 15th and 16th respectively. Damage picked up early on, however, left Aston Martin’s Sebastian Vettel 17th following a collision with Gasly for which the Frenchman was penalised.

Sainz was the third retiree, Williams’ Nicholas Latifi and Perez also bowing out, yet Ferrari has scored two consecutive victories to pile some pressure on championship leader Verstappen ahead of the French Grand Prix. 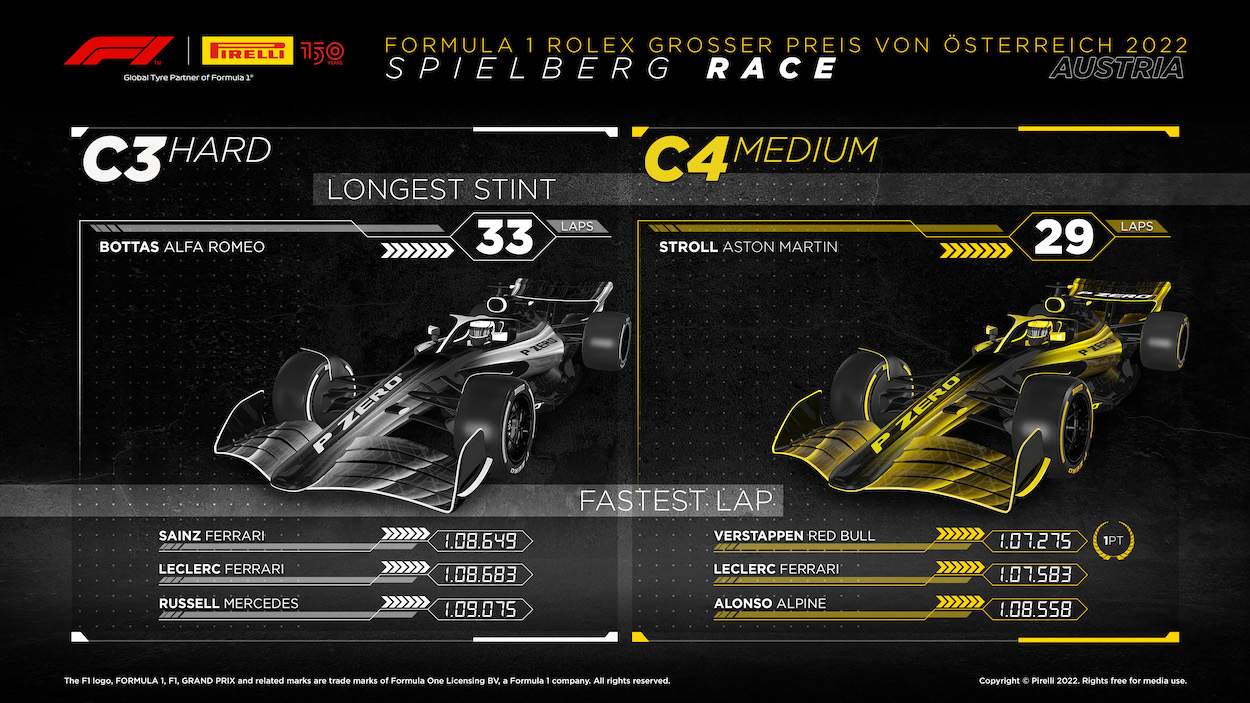 We’re happy with today’s race. All three compounds showed versatility and performance on different cars and set-ups throughout the three days of this very specific sprint weekend, on a unique circuit like Spielberg. This comes one week after Silverstone: two circuits that couldn’t be more different, but where the combination of cars and tyres both guaranteed a great show. The medium showed excellent performance, while the degradation on the hard was higher than expected today: probably because the teams didn’t have time to try it out thoroughly in race conditions during free practice, due to the condensed nature of a sprint weekend. A lot of the degradation seen today was also down to traffic on this short lap, as when cars are battling they take more energy out of their tyres. I’m happy with all the positive comments about the work done by everyone here and back in our base at Milan but there’s no time to rest: we remain at the Red Bull Ring for our latest 2023 development test, involving four teams that will share duties throughout Tuesday and Wednesday.