Max Verstappen made light work of his grid penalties to win the 2022 Belgian Grand Prix from P14 on the grid in a Red Bull one-two backed up by Sergio Perez, while pole-sitter Carlos Sainz finished P3 for Ferrari.

Lewis Hamilton and Fernando Alonso tangled at Les Combes on Lap 1, leaving the Mercedes driver out of the race before Valtteri Bottas spun out in avoidance of Nicholas Latifi and brought out a Safety Car on Lap 2.

The restart saw Verstappen line up eighth while Sainz led Perez – Leclerc having had to pit for mediums with a tear-off in his brake duct. Verstappen made quick work of the cars ahead, sweeping into P3 by Lap 8 with only Perez and Sainz to beat.

Sainz pitted from softs to mediums on Lap 12 when Perez allowed Verstappen past and into the lead. The Dutchman extended his lead until Lap 15 and clawed back the deficit to Sainz, taking the lead on Lap 19 – taking another free pit stop on Lap 31 – before going on to win over Perez by over 18 seconds in a dominant display, with the fastest lap to boot.

Sainz completed the podium ahead of Mercedes’ George Russell, who had previously passed Charles Leclerc but lost out on the final podium place by just over two seconds.

Leclerc made a late pit stop for soft tyres in an effort to take the fastest lap, but missed out on the bonus point and only just held on to P5 ahead of Fernando Alonso. However, after being caught speeding in the pit lane, a five-second penalty dropped him to P6.

The two-time champion was re-passed by the Ferrari on the final lap but finished ahead of teammate Esteban Ocon, who overhauled Sebastian Vettel (P8) and Pierre Gasly (P9) late in the race. Alex Albon rounded out the top 10 for Williams, fending off Lance Stroll for the final point.

Lando Norris caught up to a battling Albon and Stroll by the end of the race but the McLaren driver missed out and finished 12th, ahead of Yuki Tsunoda, who won a late-race battle against Alfa Romeo’s Zhou Guanyu.

Spa is a unique track, so it was great to hear that it will remain on the Formula 1 calendar next year. This year was a huge success run in variable weather conditions throughout the weekend, with 360,000 spectators witnessing an excellent show full of overtaking moves, in which our tyres played a key role. We saw a great race, with the hard being used by the majority of drivers. We will analyse all the data at our disposal but to hear on the radio that it was two-tenths of a second faster than expected was a fantastic achievement for us. Even though we knew that today’s conditions would be warmer than they were on Friday and Saturday, it was interesting to see the variety of strategies used, given the weather, track evolution, and a higher degree of degradation than expected. There were no problems with graining and the degradation was essentially thermal. We had no issues with the latest track modifications here either, thanks to our experience at the recent Spa 24 Hours, which was held during the Hungarian Grand Prix weekend with Pirelli bringing 17,000 tyres. Congratulations to Red Bull for a one-two finish today with a truly impressive race pace.

Owing to grid penalties, Verstappen started the race from 14th on the grid, opting for the P Zero Red soft tyre to make his way rapidly through the field during the opening stages. By lap 12 he had taken the lead, which he held until his first stop on lap 16 for P Zero Yellow medium tyres. Two laps later he was back in the lead, and he was able to make his final pit stop for another set of new mediums, 14 laps from the finish, without losing his advantage. He went on to take his second consecutive win from the midfield after Hungary, where he started 10th on the grid. 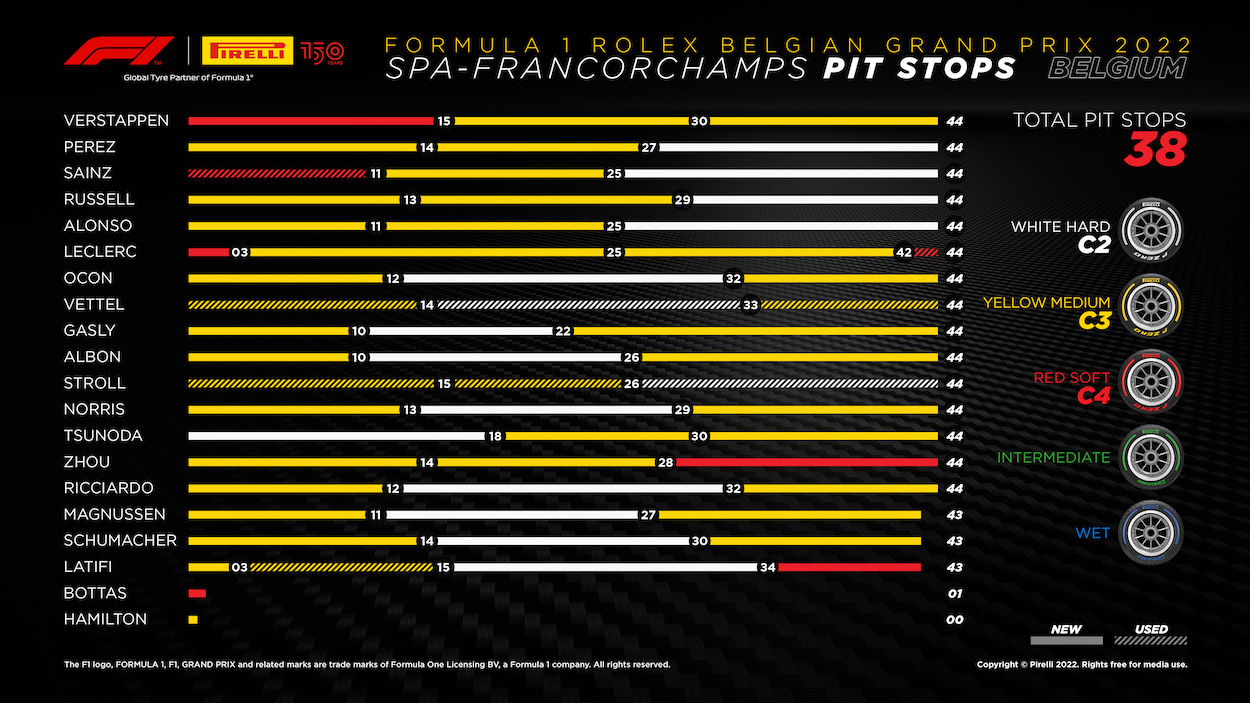 There was a wide variety of strategies today, with three different strategies in the top three. Red Bull’s Sergio Perez, who finished second, didn’t use the soft tyre: instead starting on the medium from the front row of the grid before taking on the second set of mediums and then the P Zero White hard for his final stint. Ferrari’s Carlos Sainz used the soft tyre to lead from the pole, maintaining his advantage until his first stop on lap 12 – and using all three compounds to finish on the podium. In total, 16 cars stopped twice and two stopped three times. 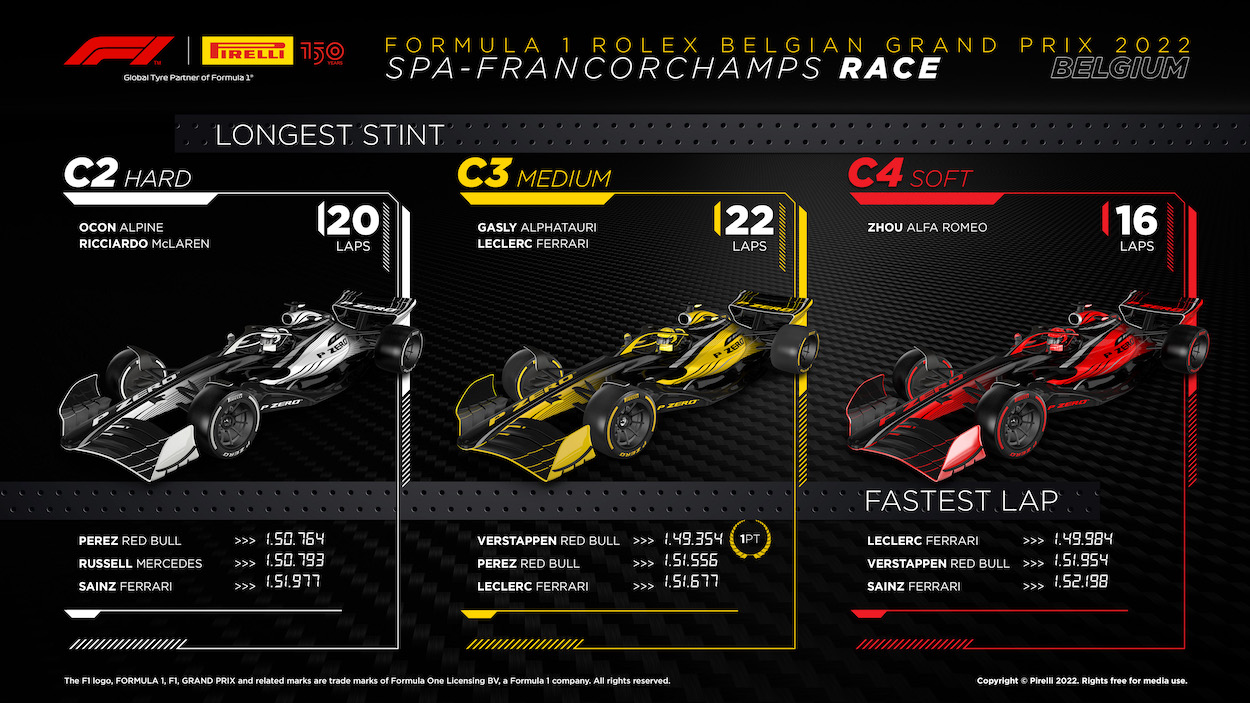