George Russell took his maiden victory in some style at the 2022 Formula 1 Brazilian Grand Prix. Mercedes took their first win and one-two of the season, with Lewis Hamilton finishing second over Ferrari’s Carlos Sainz.

Courtesy of their Sprint result and Carlos Sainz’s five-place grid penalty, Russell led Hamilton away at the start, with the Safety Car quickly deployed for a collision between Daniel Ricciardo and Kevin Magnussen that sent both cars out at Turn 8, bringing out the Safety Car.

The Lap 7 resumption saw Max Verstappen and Lewis Hamilton collide at Turn 2 before Lando Norris sent Charles Leclerc into the Turn 7 barriers. Neither of the four cars retired, but Verstappen and Norris both took five-second penalties for their incidents.

Hamilton recovered soon after his scrap with Verstappen, and the seven-time champion ran second behind Russell when a stoppage for Norris on Lap 52 brought out a VSC-turned Safety Car.

Under immense pressure, Russell retained his lead over Hamilton on the Lap 60 restart and delivered his first win by a margin of 1.5 seconds over the seven-time champion.

Carlos Sainz was made to work for the final podium spot as, despite being on medium compounds, Perez defended his podium spot for a number of laps after the Safety Car restart. Charles Leclerc asked his team to swap positions with P2 in the championship at the fore of his thinking, but Leclerc was told to settle for fourth.

Perez’s final stint on medium tyres cost him a podium and saw him drop to seventh as the team allowed soft-shod Verstappen ahead in P6. Despite that, Verstappen could not catch P5 finisher Fernando Alonso – though he also declined to hand the place back to his teammate.

Esteban Ocon, who was told not to fight teammate Alonso at the final Safety Car restart, ended up eighth, having passed Valtteri Bottas (P9) late on. Lance Stroll rounded out the top 10 ahead of his medium-shod teammate Sebastian Vettel by the chequered flag.

Zhou Guanyu declined to pit for softs in the final Safety Car restart and ended up 12th for Alfa Romeo ahead of Mick Schumacher – both drivers promoted as Pierre Gasly took a five-second penalty for speeding in the pit lane and ended up 14th for AlphaTauri.

Williams was next up, with Alex Albon ahead of Nicholas Latifi, while Yuki Tsunoda started in the pit lane and ended the race 17th.

A truly emotional race. It’s wonderful to see how Interlagos always puts on a unique show for the fans. As expected, the variables made the difference today, with accidents, two safety cars, and temperatures dropping by more than 10 degrees – which compelled drivers to adapt their driving styles according to the compounds they were using, mixing up the cards for every strategy. On top of the performance of all the different choices, it was really interesting to see how the setup of each car influenced the performance and degradation of the P Zero Red soft and P Zero Yellow medium compounds. The soft allowed for stints of more than 25 laps with manageable degradation, even with heavy cars at the start of the race, while the medium seemed to perform better towards the end, owing to track evolution with more rubber being gradually laid onto the surface. Congratulations to Mercedes and especially to George Russell for his first Grand Prix win, made all the more unforgettable thanks to this fantastic crowd here in Brazil.

Mercedes sealed its first win of the year with a one-two led by Russell – the winner of yesterday’s sprint race – who finished ahead of his teammate Lewis Hamilton. Both drivers adopted an identical two-stop strategy: soft tyres at the start, followed by a middle stint on medium and a final stint on soft. Ferrari driver Carlos Sainz completed the podium with a three-stopper, alternating between the medium and soft compounds. Sergio Perez started fourth but was passed during the final laps by both Ferraris and Alpine’s Fernando Alonso and his Red Bull teammate Max Verstappen, finishing the race in seventh on the medium tyres.

Russell set the fastest lap of the race on soft tyres: 1m13.785s. The soft was used for a 34-lap stint by Alfa Romeo’s Guanyu Zhou, who switched from the medium on lap 37. 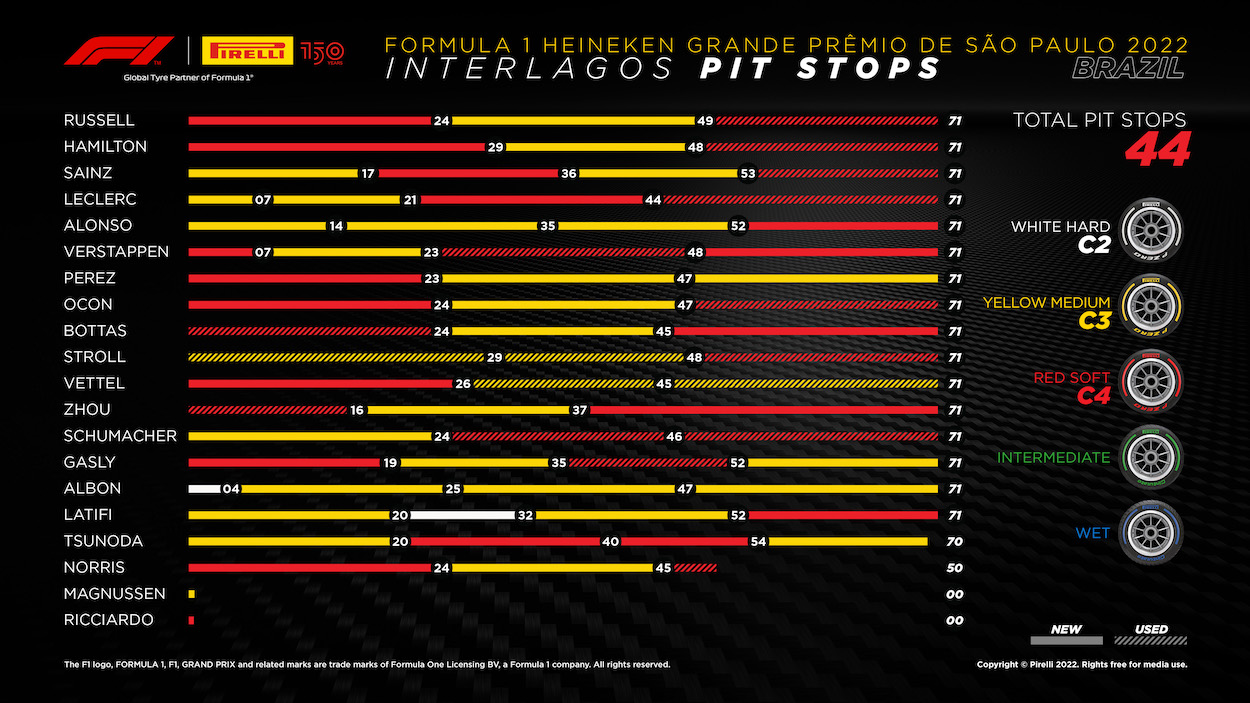 The Brazilian Grand Prix was effectively split into two different starting strategies. A total of 11 cars selected the soft tyre, and eight used the medium for the opening stint – with the only exception being Williams driver Alex Albon, who put on the hard tyre from last on the grid. He then switched to the medium after five laps during the first safety car. Most drivers ran a two-stop strategy, with most finishing on the soft. Eight drivers instead went for a three-stopper. As predicted yesterday, the hard tyre wasn’t used extensively. The safety cars during the race didn’t lead to any unexpected changes in strategy. 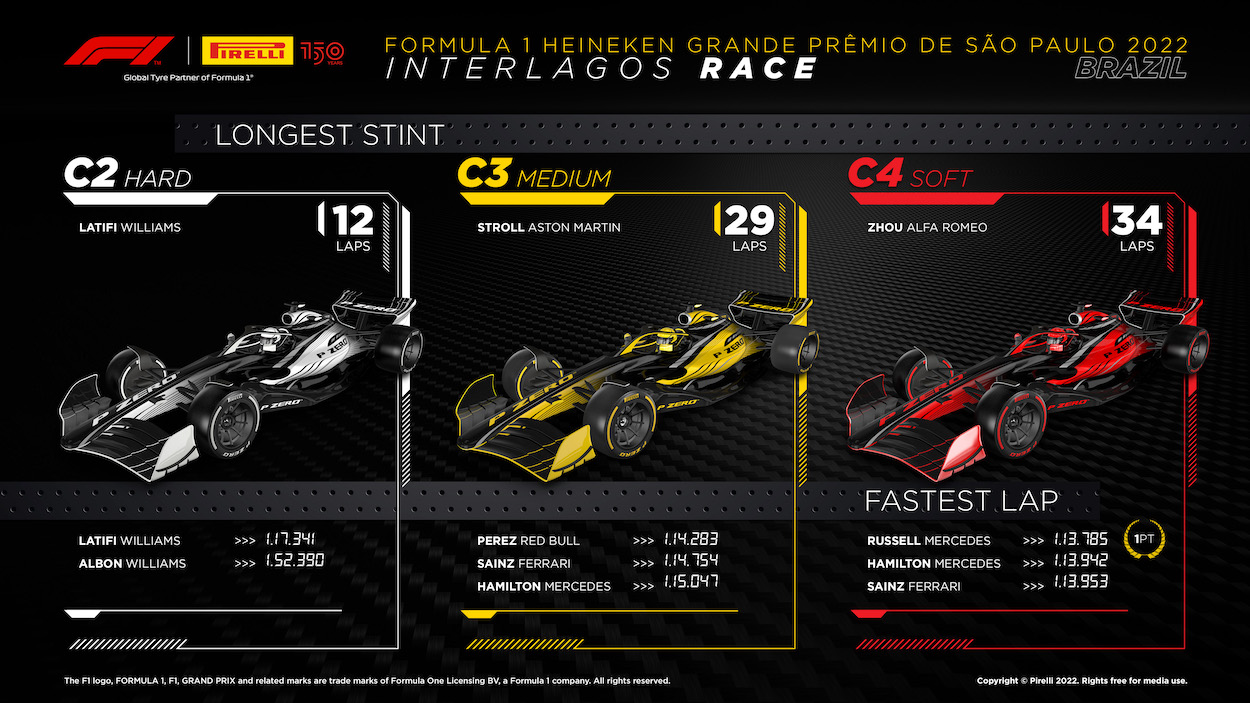