Ferrari’s Carlos Sainz has claimed his first victory after a breath-taking contest at the 2022 Formula 1 British Grand Prix, the Spaniard finishing ahead of the Red Bull of Sergio Perez and the Mercedes of Lewis Hamilton.

Key to Sainz’s victory was a late Safety Car caused by Esteban Ocon retiring his Alpine – Sainz then attacking teammate Charles Leclerc on fresh tyres at the restart to claim P1 and check out for his first win on his 150th Grand Prix start.

The action was frenetic in the final laps, however, with Perez – who’d dropped to P16 after a pit stop, having had contact at the early race restart following a red-flag stoppage – coming out on top in a thrilling fight with Hamilton and Ferrari’s Charles Leclerc to take an unlikely P2.

Hamilton, meanwhile, delighted the crowd with his second straight podium and 13th at Silverstone – an all-time record at a single venue – in P3.

The drama that caused that early red flag came at the original race start, with Alfa Romeo’s Zhou Guanyu and Williams’ Alex Albon both taken to the medical centre after separate Turn 1 incidents – with Zhou later released, as Albon was transferred to a nearby Coventry Hospital for precautionary checks, with those two, plus Mercedes’ George Russell, forced into retirement following the incidents.

Leclerc was forced to take P4, having led for large parts of the race, finishing ahead of the Alpine of Fernando Alonso and the McLaren of Lando Norris.

Championship leader Max Verstappen could only take P7, the early race leader having suffered some form of damage that hobbled his Red Bull, the Dutchman holding off the Haas of Mick Schumacher in the final laps, as the German scored his first points in F1 in P8.

Aston Martin’s Sebastian Vettel and Haas’s Kevin Magnussen rounded out the top 10, with Lance Stroll 11th in the second Aston Martin, ahead of Williams’ Nicholas Latifi, McLaren’s Daniel Ricciardo and AlphaTauri’s Yuki Tsunoda – on what was a red-letter day for Carlos Sainz. 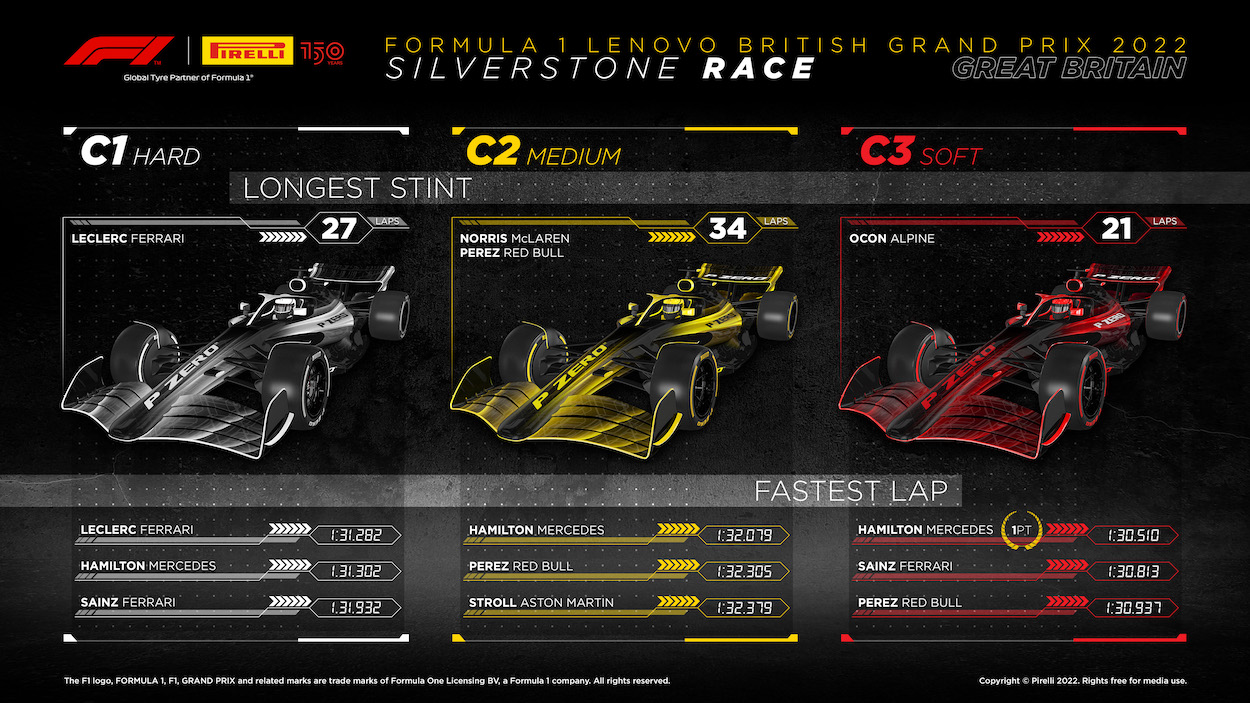 First and most importantly, we are all incredibly relieved and grateful that the drivers involved in the scary first-lap crash are OK: a testament to the incredible safety standards in the sport. After then, we saw one of the most thrilling races in recent memory, with battles all the way down the field and tyre strategy providing a key element. For anyone still asking if the 2022 new package of cars and tyres has improved the show and helped to overtake – here is your answer!