Max Verstappen claimed his fifth win in the last six races at the 2022 Formula 1 Canadian Grand Prix, withstanding a late onslaught from Ferrari’s Carlos Sainz, as Mercedes’ Lewis Hamilton took his second podium of the season in P3.

Verstappen was looking well-placed for a comfortable victory over Sainz at the Circuit Gilles Villeneuve when a Safety Car was called on Lap 49 of 70 after Yuki Tsunoda hit the Turn 2 barriers after exiting the pits.

Racing resumed with 16 laps remaining, Verstappen holding off the attacks of the fresher-tyred Sainz to claim his sixth victory of the season, and his 26th overall, as Sainz took his fifth podium of the year – although the Spaniard’s wait for his first victory continues.

Hamilton had been scathing in his assessment of the Mercedes W13 on Friday, but the car looked handy on race day in Canada, as the seven-time champion completed the podium, his first rostrum appearance since the Bahrain season opener.

George Russell backed up his teammate in P4, while Charles Leclerc was able to recover to P5 for Ferrari, having started 19th after a raft of power unit element changes.

A slow stop for Daniel Ricciardo contributed to him finishing just outside the points in P11 for McLaren, ahead of the Aston Martin of Sebastian Vettel, with Alex Albon taking 13th for Williams.

Pierre Gasly encountered problems early on and was left to come home 14th for AlphaTauri, ahead of McLaren’s Lando Norris – who also had a slow stop – Williams’ Nicholas Latifi and Haas’s Kevin Magnussen, the Dane dropping from behind P5 on the grid to P17 after a tough day in Canada.

Tsunoda was joined by Haas’s Mick Schumacher and Red Bull’s Sergio Perez in the retirements category, both Schumacher and Perez pulling up at Turn 8 early doors with technical issues.

For Verstappen, though, there were no such problems, as he further stretched his lead at the top of the standings, with what was only his second-ever Montreal podium. 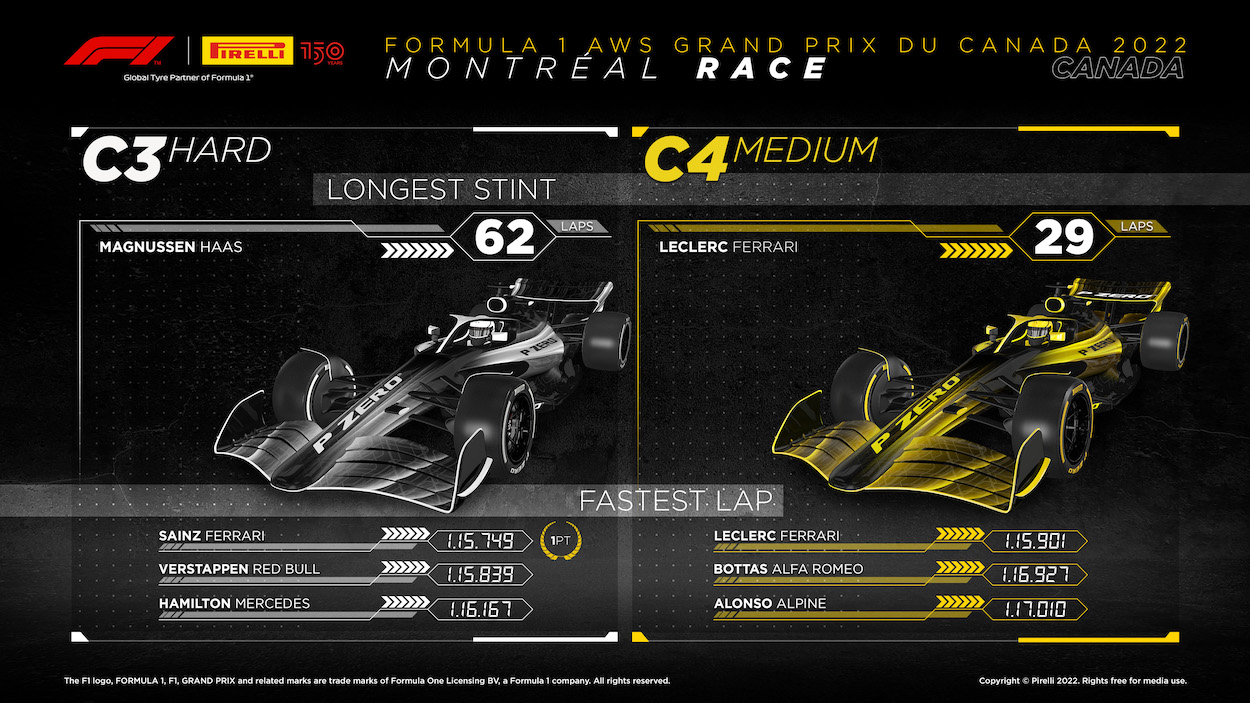 It was nice to see our new 18-inch tyres providing close competition in Canada all the way down the grid, delivering some hard-fought battles. The same strategy but slightly different timings for Max Verstappen and Carlos Sainz set up a thrilling fight to the finish, in which they were able to follow each other right to the flag. The P Zero medium and hard tyres allowed all the drivers to push to the maximum from start to finish, enabling a duel for victory and a brilliant fightback from the bottom of the grid for Charles Leclerc.