Max Verstappen won the 2022 Formula 1 French Grand Prix for Red Bull after Ferrari’s Charles Leclerc crashed out of the race on Lap 18 – walking away unscathed – as the Mercedes duo of Lewis Hamilton and George Russell completed the podium at Paul Ricard.

High track temperatures meant tyre management was key at Le Castellet, and after Verstappen pitted on Lap 17, it was up to Leclerc to respond. A cruel snap of oversteer at Turn 11 spelt the end of his race – and cued a scream of frustration – before bringing out a Safety Car. Verstappen stayed out and inherited the lead, Hamilton and Red Bull’s Sergio Perez pitting and giving chase for the restart.

Championship leader Verstappen led comfortably when the race resumed on Lap 22, opening a four-second gap over Hamilton by Lap 30 of 53 and eventually winning by a margin of over 10 seconds. Perez lost P3 to Hamilton at the start of the race and couldn’t keep pace with him.

He nonetheless seemed favourite to finish third but after a late Virtual Safety Car – triggered by Zhou Guanyu’s on-track stoppage in the Alfa Romeo – he lost the final podium place to Mercedes right as the VSC ended on Lap 50. Perez and Russell had previously made contact at Turn 8 – no penalties applied – in a fraught battle for the rostrum, which ended with the pair split by just 0.8s by the flag.

The driver of the Day Carlos Sainz started 19th with engine penalties, but with his Ferrari on hard tyres, he made it into the top 10 by Lap 14. He pitted for mediums during the Safety Car, but an unsafe release led to him serving a stop-go penalty and pitting again for mediums on Lap 43. He passed the Alpines and McLarens to finish fifth at the chequered flag.

Alpine’s Fernando Alonso passed Lando Norris early on and stayed in the sixth, ahead of both McLarens for much of the race, holding them up for teammate Esteban Ocon to take P7 off Daniel Ricciardo after the Safety Car restart. McLaren started the afternoon level on points with Alpine but, with Norris finishing seventh and Ricciardo ninth, Alpine moved ahead in the standings heading to Hungary.

Lance Stroll rounded out the top 10 having won out in an early battle – and last-lap scrap that threatened to boil over – against 11th-place Aston Martin teammate Sebastian Vettel for the final point.

Pierre Gasly went from hard tyres to mediums in the Safety Car restart and finished 12th, ahead of Alex Albon – the Williams driver eventually losing out to the AlphaTauri.

Alfa Romeo’s Valtteri Bottas finished 14th on a hard-hard-medium strategy, while the Haas of Mick Schumacher was the last of the finishers in P15, the German having been tapped into a spin in an incident with Zhou before the halfway point.

Yuki Tsunoda spun early on having been tapped by Alpine’s Ocon, the AlphaTauri driver becoming the first to retire from the race on Lap 17 with damage.

Kevin Magnussen made it from 20th to 14th after the Safety Car restart, but contact with Williams’ Nicholas Latifi saw the Dane retreat to the pits to retire before Lap 40, Latifi following suit a couple of laps later.

Zhou suffered his fifth retirement of the season, pulling up just off the track to bring out a VSC late in the race.

In these boiling conditions that peaked at 57 degrees of track temperatures, we thought two pit stops might be favoured. But in the end, as per our initial forecast, only one stop was needed – the fastest way on paper – thanks to the ability of both the hard and the medium compounds to handle these demanding conditions. There was a high degree of degradation, in line with what we would expect in these temperatures, and some blistering but nothing that compromised the performance and integrity of the tyres here, at another exciting and unpredictable race.

How the compounds made a difference: 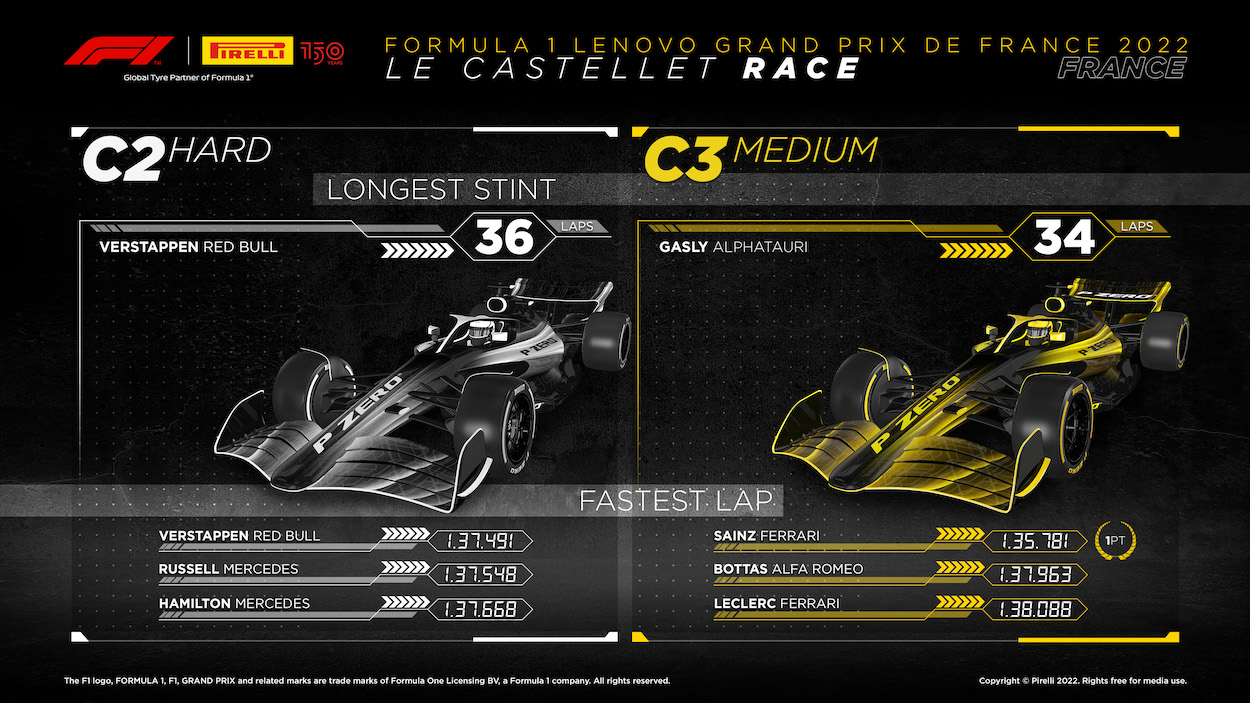