Russell led on soft tyres and pitted on Lap 15, soft-shod Verstappen pitting from P5 a lap later to force Carlos Sainz to pit from the lead. Charles Leclerc meanwhile stayed out in the lead, extending his first stint until Lap 22. Russell led again but was passed by Sainz on Lap 31. So, from P4, Verstappen forced the issue with a second stop for mediums on Lap 39.

Crucially, with that stop, Verstappen had pulled off an undercut on Sainz and had an advantage on Leclerc too, the Monegasque starting on mediums to swap for the same compound after a long first stint – and from the lead pitting from hard tyres well after Verstappen. The Dutchman cleared his rival with ease soon after that and it became clear that hard tyres weren’t the answer; Leclerc fell to P6 as he switched again for softs while Verstappen won by 7.8s.

And that was despite a 360-degree spin that almost cost Verstappen at the final corner and forced him to make another overtake on Leclerc.

Hamilton started seventh on mediums, cleared the Alpines, pitted for mediums and stayed out long to ensure he could finish the race on softs, which ensured he could pass the likes of Sainz and then Russell to finish second.

Having started on pole, Russell couldn’t convert that to a win, his soft-medium-medium strategy seeing him end up third ahead of Sainz, who was cost by slow pit stops to finish fourth behind the Mercedes. Sainz still held off Sergio Perez by a second, while Leclerc couldn’t use his soft tyres to pass Perez and ended up sixth behind the Red Bull on another disappointing day for the Scuderia.

Lando Norris beat the Alpines to seventh, while Fernando Alonso finished P8 at the expense of teammate Esteban Ocon. Sebastian Vettel scrapped with Lance Stroll to lead his Canadian teammate for P10.

Pierre Gasly took P12, comfortably ahead of 13th-place Zhou Guanyu. Mick Schumacher was next, while Daniel Ricciardo could only manage 15th thanks to a five-second penalty ahead of the other Haas of Kevin Magnussen – who was involved in a minor collision early on.

Williams were next, Alex Albon finishing ahead of Nicholas Latifi in P17 and P18 respectively, while a spin saw Yuki Tsunoda finish 19th and last for AlphaTauri.

Valtteri Bottas stopped five laps from the end to bring out a Virtual Safety Car and a last-place classification for the Alfa Romeo.

I’m thrilled for the hundreds of thousands of spectators who came to the track and all the other fans around the world who saw three teams in a close fight for victory for the first time this season. This is a win for everyone in Formula 1, and it was also great to see around 10 different tyre strategies during the race – with every compound used – which all played their part in delivering an exciting and spectacular Grand Prix, just as we have seen all year so far. Budapest now marks the beginning of the summer break, but not straight away for us: on Tuesday and Wednesday we stay here at the Hungaroring to continue our 2023 testing programme. It’s the final push before the holidays, which we will tackle safe in the knowledge of all the work that has been carried out thanks to the efforts of everyone at Pirelli: both present on the track, and back at base in Milan.

How the compounds made a difference: 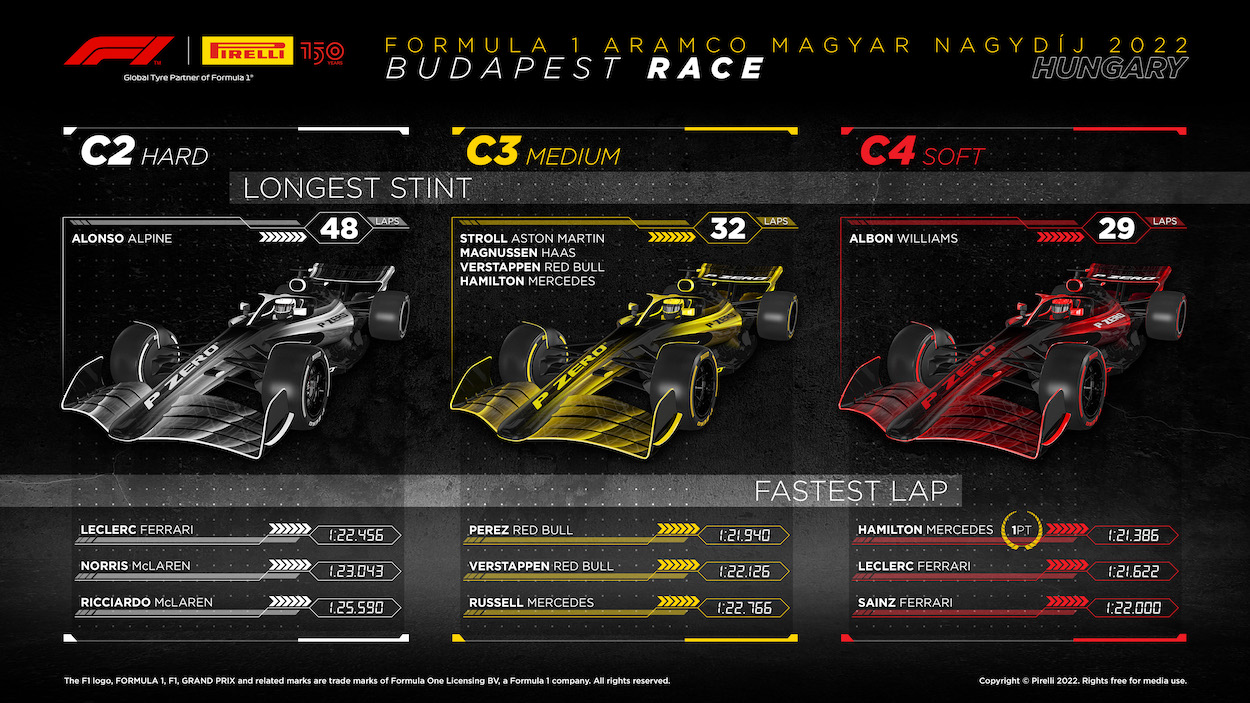