After the paddock paid their respects to the late Queen Elizabeth II, the mixed-up grid lined up behind Leclerc and fellow front-row starter George Russell in the Mercedes, both eschewing the general consensus of medium tyres to begin on new softs along with Verstappen, Williams’ debutant Nyck de Vries, and Alpine’s Esteban Ocon.

From P7 on the grid, Verstappen made it into the top three by Lap 4 and took P2 off Russell a lap later. The Dutchman then led as, during a Virtual Safety Car (for Sebastian Vettel’s DNF on Lap 12), Leclerc pitted from softs to mediums.

Verstappen extended his first stint and swapped for mediums on Lap 26, relinquishing the lead back to Leclerc, who then pitted a second time for soft tyres on Lap 33. The Monegasque driver had a tyre advantage over Verstappen but a 20-second deficit to claw back by Lap 53. The Dutchman seemed assured of a comfortable victory until a Safety Car on Lap 48 for the stationary McLaren of Daniel Ricciardo. That allowed the top five to pit for softs anticipating a restart.

However, Ricciardo’s car seemed immovable, and the ticker reached Lap 53 and the chequered flag with the field behind the Safety Car – giving Verstappen a slim but altogether comfortable victory over Leclerc, allowing Russell to retain the final podium place.

From P18, Ferrari’s Carlos Sainz made it to the podium spots with a long first stint on medium tyres but fell to P4 after pitting and ended up behind Russell. Lewis Hamilton declined to pit under the late Safety Car and finished fifth for Mercedes ahead of the second Red Bull of Sergio Perez, who pitted early for hard tyres and ended up settling for sixth and fastest lap, having started 13th.

Lando Norris finished seventh for McLaren, having started on the second row, with Pierre Gasly taking eighth for AlphaTauri. That left Williams’ Nyck de Vries ninth for Williams on his first-ever Grand Prix appearance, the Dutchman also taking Driver of the Day honours.

Rounding out the top 10 was Alfa Romeo’s Zhou Guanyu, with Ocon missing out on points. Mick Schumacher made late gains for P12 for Haas ahead of Valtteri Bottas in the Alfa Romeo, with Yuki Tsunoda finishing 14th, having pitted under caution in the AlphaTauri. Nicholas Latifi lagged on hard tyres and finished 15th for Williams ahead of Kevin Magnussen, who picked up a five-second penalty for leaving the track and gaining an advantage on Lap 1 in the Haas.

Ricciardo retired late on to bring out the Safety Car, while both Aston Martins – Lance Stroll and Sebastian Vettel – failed to finish the race with suspected power unit issues. Fernando Alonso also retired, ending a run of points scores for the Alpine driver.

We are proud to play a prominent part in this celebration of Italian automotive technology and know-how at our home Grand Prix, on the occasion of Monza’s centenary and Pirelli’s 150 years.

As well as also producing motorsport tyres at the cutting edge of technology for nearly 250 championships worldwide, we sustain culture and support the arts through Pirelli HangarBicocca in particular, so Pirelli wanted to mark this occasion with a unique trophy that has direct relevance to the pinnacle of world motorsport. Many thanks to Patrick Tuttofuoco and Pirelli HangarBicocca for making it happen through an iconic artwork that perfectly links past and present.

It took Red Bull’s Max Verstappen just 12 laps to rise from P7 on the grid to the race lead after Ferrari’s poleman Charles Leclerc pitted under a virtual safety car. They were two of five drivers to start on the P Zero Red soft tyres, with the other 15 starting on the P Zero Yellow medium. Verstappen pitted for his only scheduled stop on lap 25, underlining the low degradation of the soft, before re-emerging in second on the medium and taking the lead once more when Leclerc made his second stop. A safety car close to the end triggered another round of stops, but this did not alter the overall classification, with the race ending under the safety car. 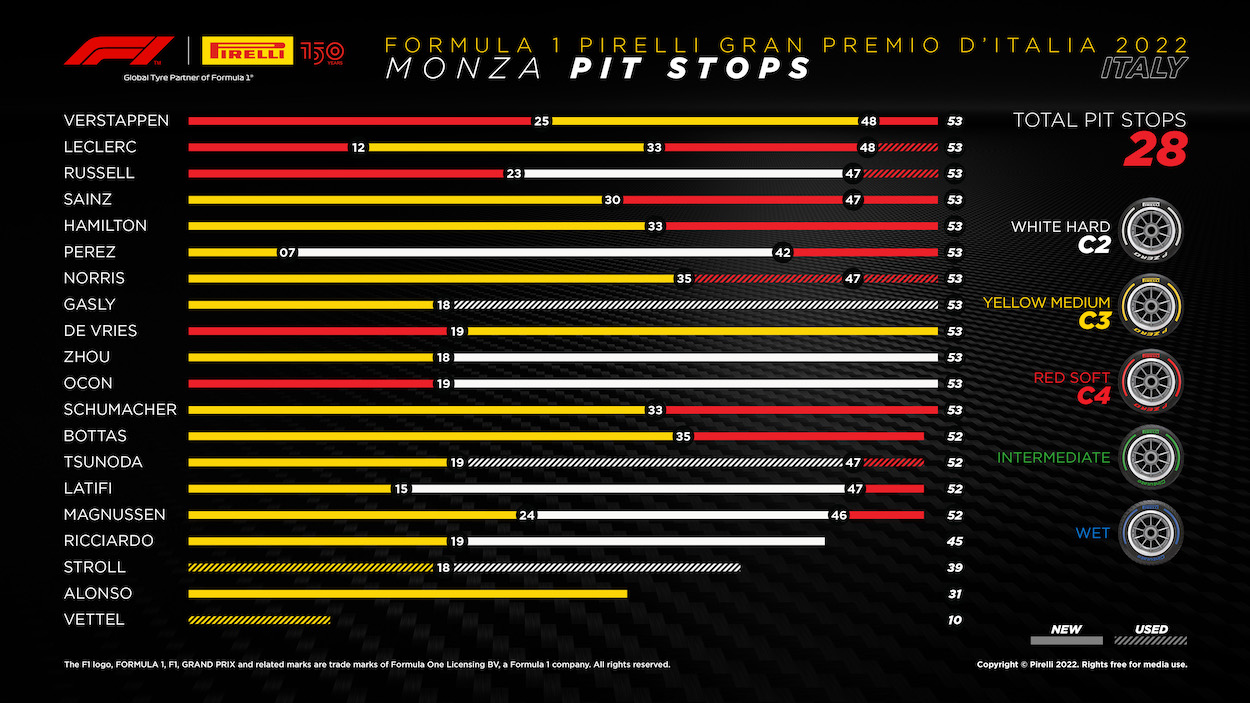 There was a variety of different strategies seen today, with eight different strategies in the top 10. While the winning strategy was likely to have been a one-stopper (without the safety car), Leclerc committed to a two-stopper using soft and medium, while Mercedes driver George Russell was the only podium finisher to use the P Zero White hard as part of his run plan.