Max Verstappen claimed victory in the 2022 Formula 1 Japanese Grand Prix and took the world title with it after a dramatic late penalty for Charles Leclerc put the championship beyond doubt.

Verstappen won a restarted race amid persistent rain at Suzuka, with Leclerc initially looking set to finish second. But the Ferrari driver was penalised for cutting the chicane on the final lap as he defended from the other Red Bull of Sergio Perez.

The dramatic points swing means Verstappen heads to the United States Grand Prix and the season’s final four races with an unassailable lead over Perez and Leclerc – confirming him as champion.

The race initially got underway as planned at 1400 local time, with Verstappen defending from Leclerc after a close run to Turn 1 and only two laps being completed before the action was red-flagged amid intense spray and a series of incidents – which included Carlos Sainz crashing out.

A lengthy delay followed, with the overall three-hour race limit ticking down and the two-hour window coming into force an hour after the initial start, as Race Control waited for a suitable gap in the weather to get the action going again.

With just under 50 minutes to run on the race clock, the Safety Car led the field out of the pit lane for a planned rolling start, which was soon carried out and released the pack of cars – all of them this time forced to run wets, rather than having the choice to use intermediates.

From there, Verstappen mastered the switch from wets to intermediates as the track surfaced gradually improved and edged away at the head of the field, eventually crossing the line more than 20 seconds clear.

Leclerc was on course to finish second and to keep the title race alive, but he was penalised for cutting the final chicane on the final lap to keep a charging Perez at bay, with the points difference meaning Verstappen sealed the crown.

Esteban Ocon took a fine fourth for Alpine after some fierce defending against Lewis Hamilton’s Mercedes, with Sebastian Vettel recovering from a clash with Fernando Alonso at the initial start to take P6 on his final Suzuka appearance.

Alonso bolted on another set of intermediates in the closing stages to come home in P7, ahead of George Russell, Nicholas Latifi – who, along with Vettel, made an early switch from wets to intermediates – and McLaren’s Lando Norris.

Daniel Ricciardo narrowly missed out on joining Norris in the points as he took P11 ahead of Lance Stroll (Aston Martin), home favourite Yuki Tsunoda (AlphaTauri) and Kevin Magnussen (Haas).

Alfa Romeo pair Valtteri Bottas were P15 and P16, respectively, with Pierre Gasly 17th after a dramatic encounter that saw him start from the pit lane and pick up damage from an advertising board.

That board was flicked onto the circuit after Sainz’s aforementioned accident, the Ferrari driver losing control of his car at the exit of the Turn 11 hairpin, which was followed by the Safety Car and a red flag being issued.

Alex Albon was the other retirement, having clashed with Kevin Magnussen amid the spray on the opening lap and pulled off the track due to a technical issue brought on by the contact.

Congratulations to Max Verstappen for his second title!

The Japanese Grand Prix came down to a 40-minute sprint race after the wet conditions hampered visibility too much for the race to start… The conditions dictated the tyre strategy for everyone, as the safety car start meant that all the drivers had to start on the full wets. But it soon became clear that the intermediates were best for the circumstances, which performed strongly in inconsistent conditions at an impressive pace. Looking after the front tyres were critical, with the drivers showing their skills in managing their used intermediates during the race’s closing stages. A big thank you to the fantastic Japanese fans, who finally saw an action-packed sprint after waiting so long, showing once again their passion and commitment to Formula 1 by staying put despite the challenging weather. They deserve all our affection and support.

Red Bull’s Max Verstappen qualified on the pole in dry conditions and was able to convert that advantage into the lead on the Cinturato Blue full wets. He pitted a couple of laps after the re-start for Cinturato Green intermediates, at the same time as his pursuer Charles Leclerc (Ferrari) and re-emerged in the lead he maintained to the end after 28 laps. 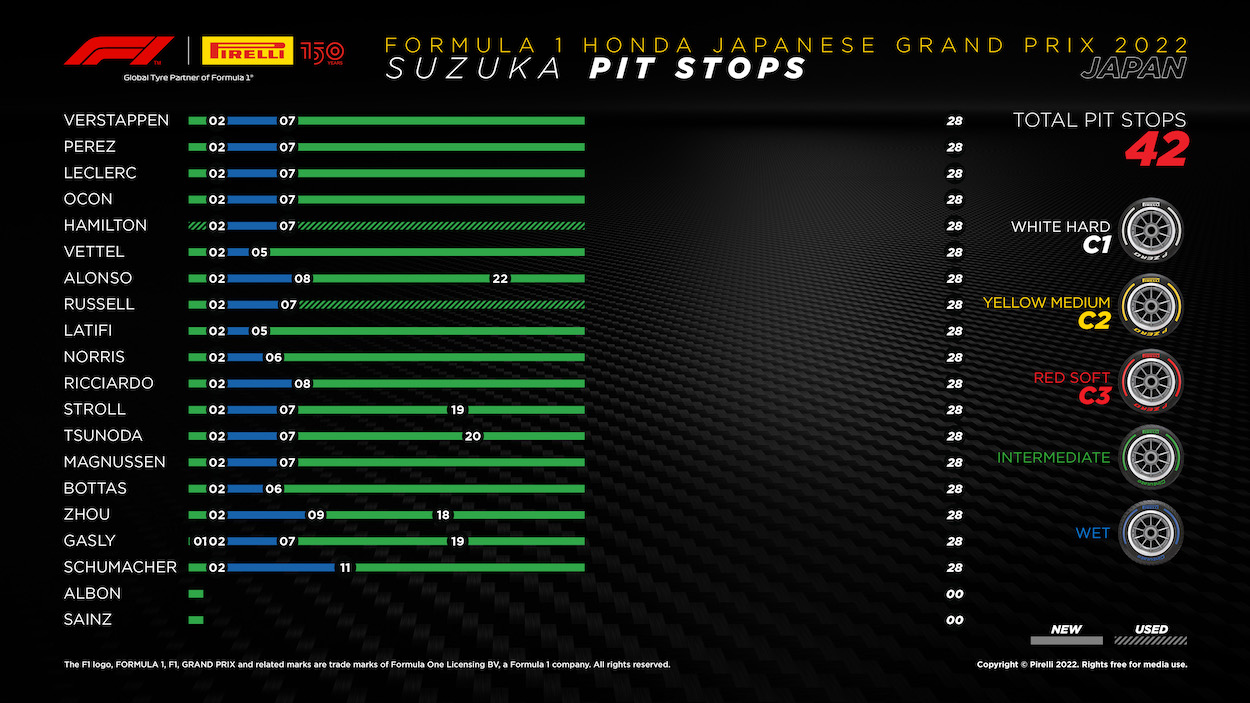 With such a short race starting behind the safety car in wet conditions, a clear-cut strategy left little room for variation. However, some drivers initially stayed out on their full wet tyres while the majority pitted for intermediates after the start – hoping to gain track position and take advantage of any potential safety cars. This didn’t materialise, though, with all the drivers apart from five stopping just once. The highest-placed two-stopper was Alpine’s Fernando Alonso in seventh. 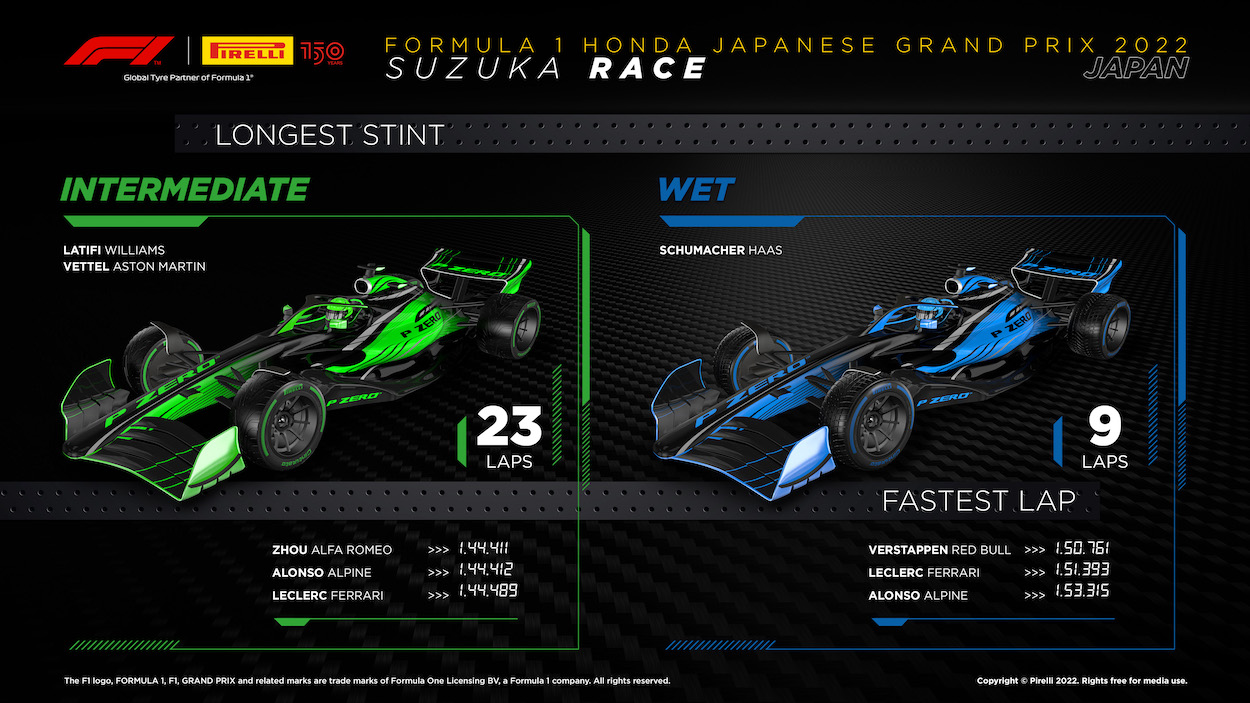