Max Verstappen claimed his 14th victory of the season in the 2022 Formula 1 Mexico City Grand Prix, ahead of Mercedes rival Lewis Hamilton and Red Bull teammate Sergio Perez, after an intriguing strategic battle played out at the Autodromo Hermanos Rodriguez.

It secures another record for the Dutchman in his burgeoning career, as he now boasts the most wins in a single F1 campaign, moving one clear of the 13 achieved by Michael Schumacher (2004) and Sebastian Vettel (2013).

Verstappen, whose Red Bull team opted for a soft-medium tyre strategy, took the chequered flag some 15 seconds clear of Hamilton, who was left to question why Mercedes swapped their starting set of mediums for hards.

Perez gave the home fans something to cheer about in third, having threatened to challenge Hamilton late on, while Russell – who lost out to his teammate at the start – took a distant fourth.

Russell was also unhappy with his strategy, repeatedly asking Mercedes to pit again and ditch the hard tyres, which failed to bring the race back to the Silver Arrows in the closing stages – a stop for softs with two laps to run, at least yielding the fastest lap.

Ferrari endured a lacklustre race as Carlos Sainz and Charles Leclerc claimed lonely P5 and P6 finishes, ahead of McLaren driver Daniel Ricciardo, who charged his way to seventh with soft tyres late on and kept the position despite a 10-second time penalty for a clash with Yuki Tsunoda.

Esteban Ocon placed eighth after a painful late retirement for Alpine teammate Fernando Alonso, as the other McLaren of Lando Norris and Alfa Romeo’s Valtteri Bottas – not quite able to repeat his qualifying performance – completed the points.

AlphaTauri driver Pierre Gasly picked up a five-second penalty for an early, aggressive move on Aston Martin rival Lance Stroll and ultimately missed out on a point by just half a second, with Alex Albon 12th for Williams.

Zhou Guanyu got his Alfa Romeo to the line ahead of Aston Martin pair Vettel – sporting a touching tribute helmet to the late Dietrich Mateschitz – and Stroll, followed by the Haas cars of Mick Schumacher and Kevin Magnussen.

Nicholas Latifi was the final finisher in his Williams, with the aforementioned Alonso grinding to a halt with an engine issue late on and Tsunoda retiring after briefly going airborne in his collision with Ricciardo.

Seeing how all three compounds gave the drivers and teams a chance to approach the race in a sort of strategic chess game on the track and the pit wall is obviously a source of satisfaction for us. Different strategies were based on individual capabilities to optimise the tyres, with the mediums being a protagonist and the hard and the soft playing a fundamental role, showing strong performance and limited wear. It all came down to a strategic duel between the two teams that had managed to get the most out of the tyres all weekend. This is particularly significant for us, especially following 15 intense days that took in two tests of the 2023 prototype tyres to collect data on both the hard and the soft compounds in Austin and Mexico City, respectively, as well as the comments of the real stars – the drivers – who showed enthusiasm and real engagement when it came to analysing all the topics that emerged, right up to the Friday night of the second test. Congratulations to Red Bull and Max Verstappen for their victory and a new record of 14 wins in one season in front of Mexico’s unique crowd.

Verstappen chose the P Zero Red soft tyre at the start to lead before switching to the P Zero Yellow medium tyres on lap 25 and conceding his advantage. He regained the lead once his Mercedes rivals had made their single stops, and from there, it was a question of managing his medium tyres to the finish: completing a 46-lap stint on the yellow compound to win by 15 seconds. 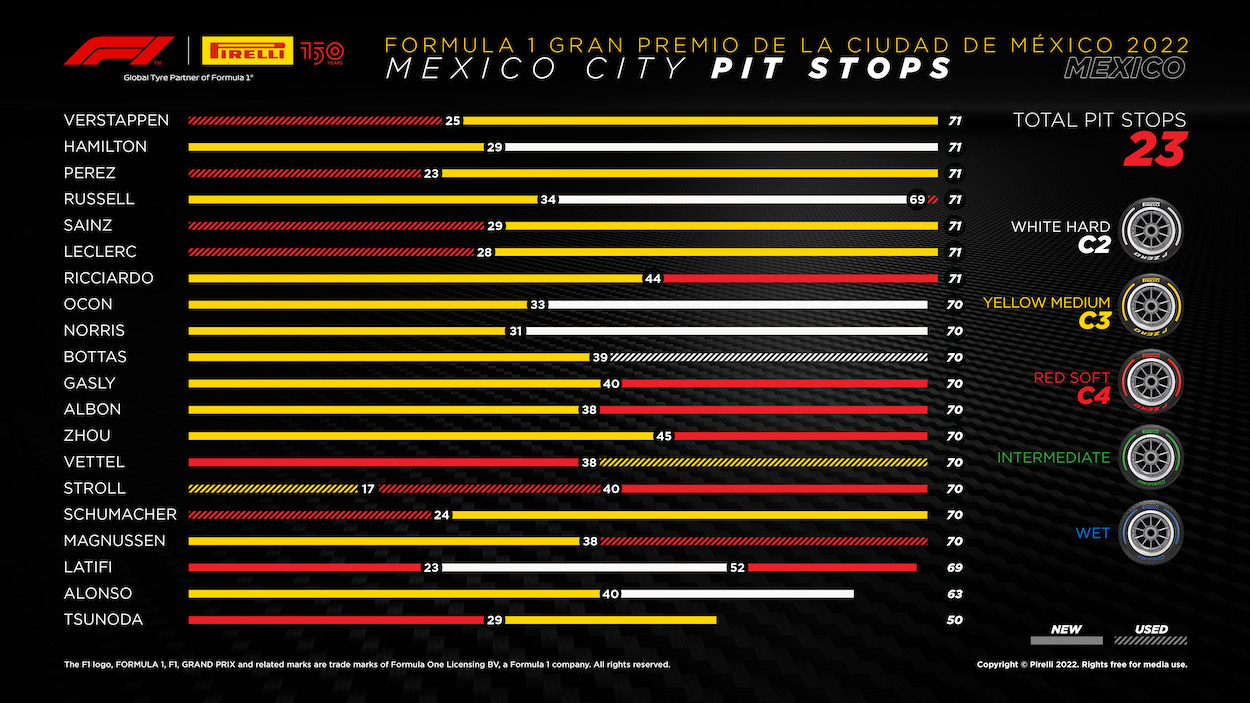 With 12 drivers starting on the soft and eight on the medium, there was a big mix of strategies from the start. This was reflected in the key battle between Red Bull and Mercedes, with Mercedes selecting the P Zero White hard tyre for the second stint after an opening stint on the medium. Lewis Hamilton’s second place at the finish equalled his best result of the season set just one week ago in Austin. His teammate George Russell was one of just three drivers to stop twice, putting on the soft tyre at the end to secure an extra championship point for the fastest lap on the final tour. 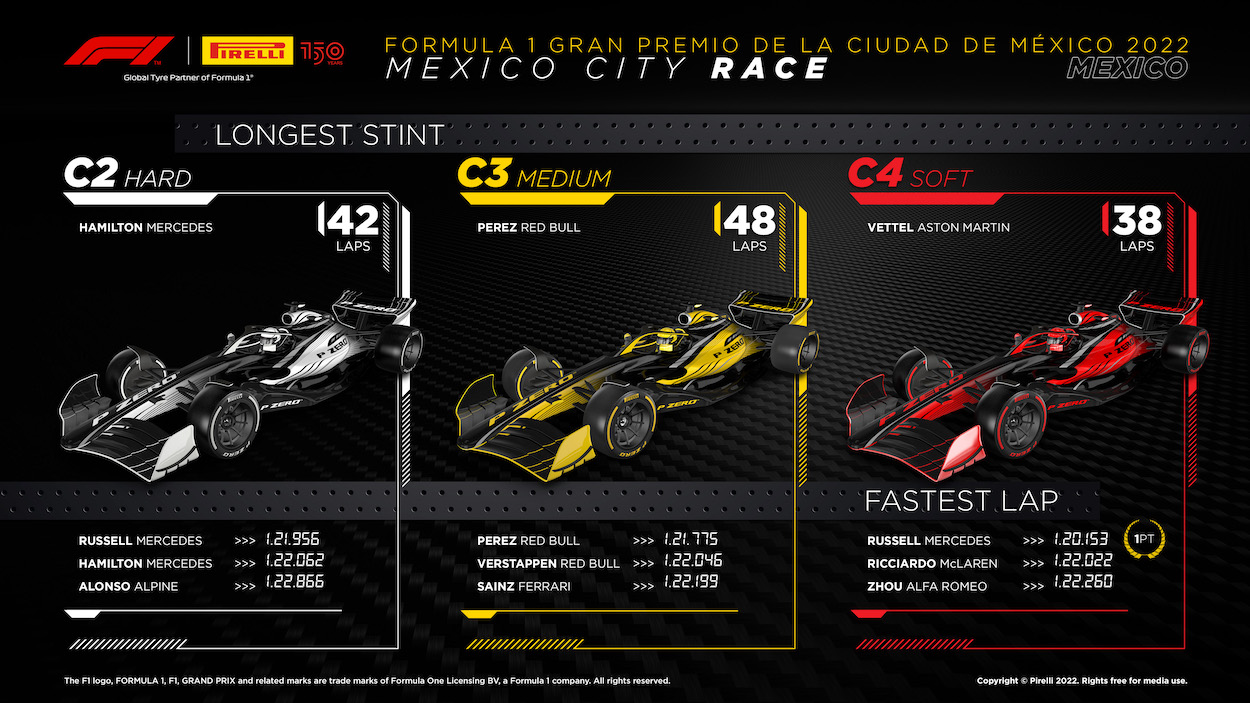