Ferrari’s Charles Leclerc looked in control heading to the halfway point, however, he lost power on lap 29 and retired giving Verstappen and Pérez the chance to overtake the Mercedes of George Russell for another 1-2 result following the recent Emilia Romagna Grand Prix 1-2.

Verstappen now leads Leclerc by six points in the drivers’ standings with Pérez 25 points behind his teammate in third and Oracle Red Bull Racing now leading the 2022 constructors’ standings by 26 points.

It’s great to finish the race today alongside Checo with a first and second place, it was a difficult beginning but a good end! I went off in turn four, I completely lost the rear and they said on Team radio that it was a big gust of wind. I lost a few positions through that and as soon as I wanted to attack, my DRS stopped working. It was upsetting at the time but then I calmed myself down and focussed on the bigger picture. It was a tough battle with George Russell, especially without the DRS, I didn’t want to take too much of a risk as we were fighting for the lead, I had to be patient. As for the DRS, I’m not sure why there’s an issue, we’ll look into it and at the end of the day, nothing was lost. We are on a good trajectory and we can be proud of that as a Team, but as you can see, some things are fragile and we need to keep on working hard, we have to be on top of everything.

It’s a great result, we are leading the Constructors Championship so, although I obviously want to win, I have to be realistic and I am happy with the Team result. My frustration on the radio was in the heat of the moment but I need to speak with the Team to understand a few bits from the race. Sometimes when you are driving you can’t get the full picture, so it is a normal thing to debrief things to understand the race. The Team momentum couldn’t be any better here, it is a great Team and we are very united. It wasn’t about Team orders today, what really changed my race was going onto different tyre strategies and that worked better for Max and, at the end of the day, the Team because we managed to both get past George. I could have won today but making the two-stop work was difficult and it turned out that the three-stop was the better strategy. I think we had a very strong race today, the race pace and management from us were great today and it was important not to make mistakes. Hopefully, we continue this momentum on to Monaco and are strong next weekend too.

It is fantastic for the Team to bring home our second 1-2 finish in three races, which was hugely important for us in the fight for both Championships. Both drivers got great starts and things were settling down quite nicely, but a massive gust of wind sent Max into a slide and that dropped him down to fourth. We already knew he had a DRS issue, so at that point, we decided to convert him to a three-stop strategy and give him a tyre advantage over Leclerc and Russell – but we were still undecided whether a two or three-stop was the better choice at that stage. With Checo on a two-stop strategy, it meant both drivers were working as a Team and covering the opposition. To get maximum points today was our aim, it was hugely important for us as a Team and I’m glad we were all able to work together to achieve that. 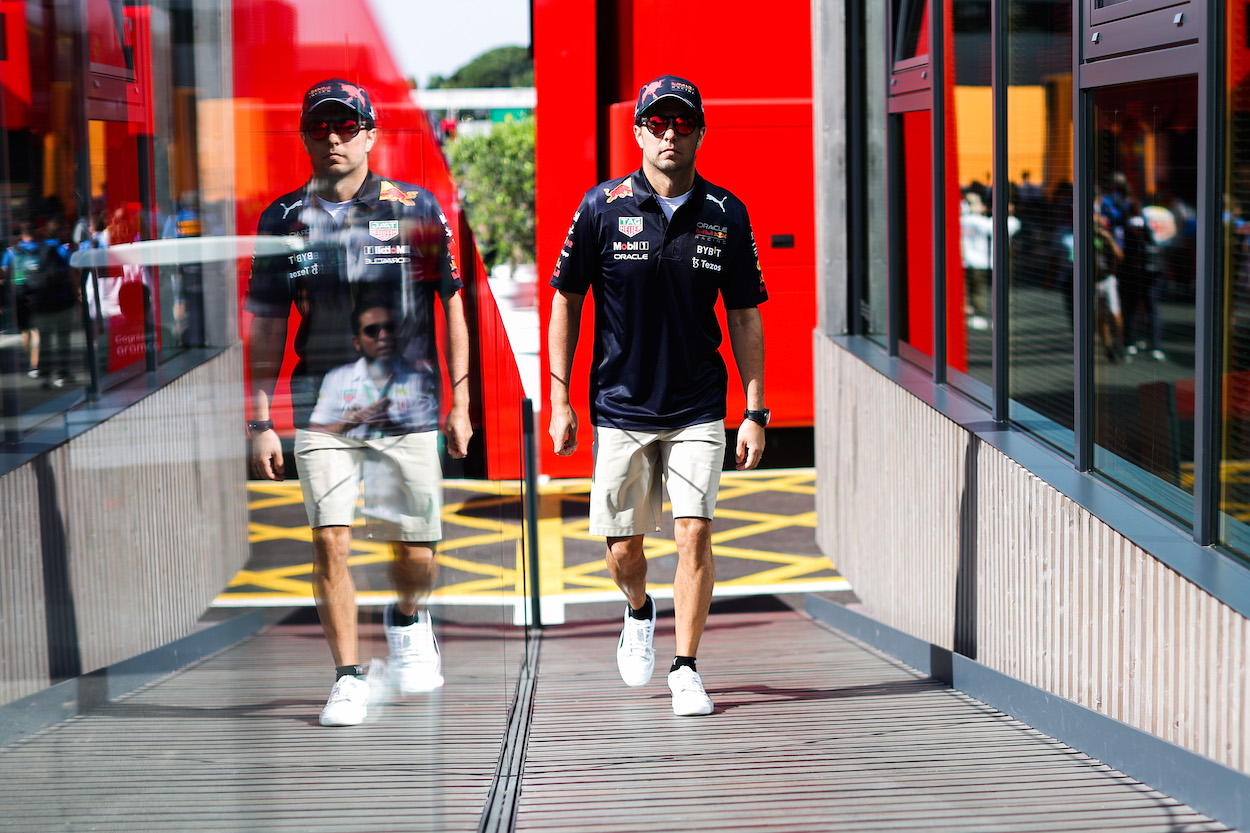 BARCELONA, SPAIN – MAY 21: Sergio Perez of Mexico and Red Bull Racing arriving during practice ahead of the F1 Grand Prix of Spain at Circuit de Barcelona-Catalunya on May 21, 2022 in Barcelona, Spain. (Photo by Peter Fox/Getty Images) 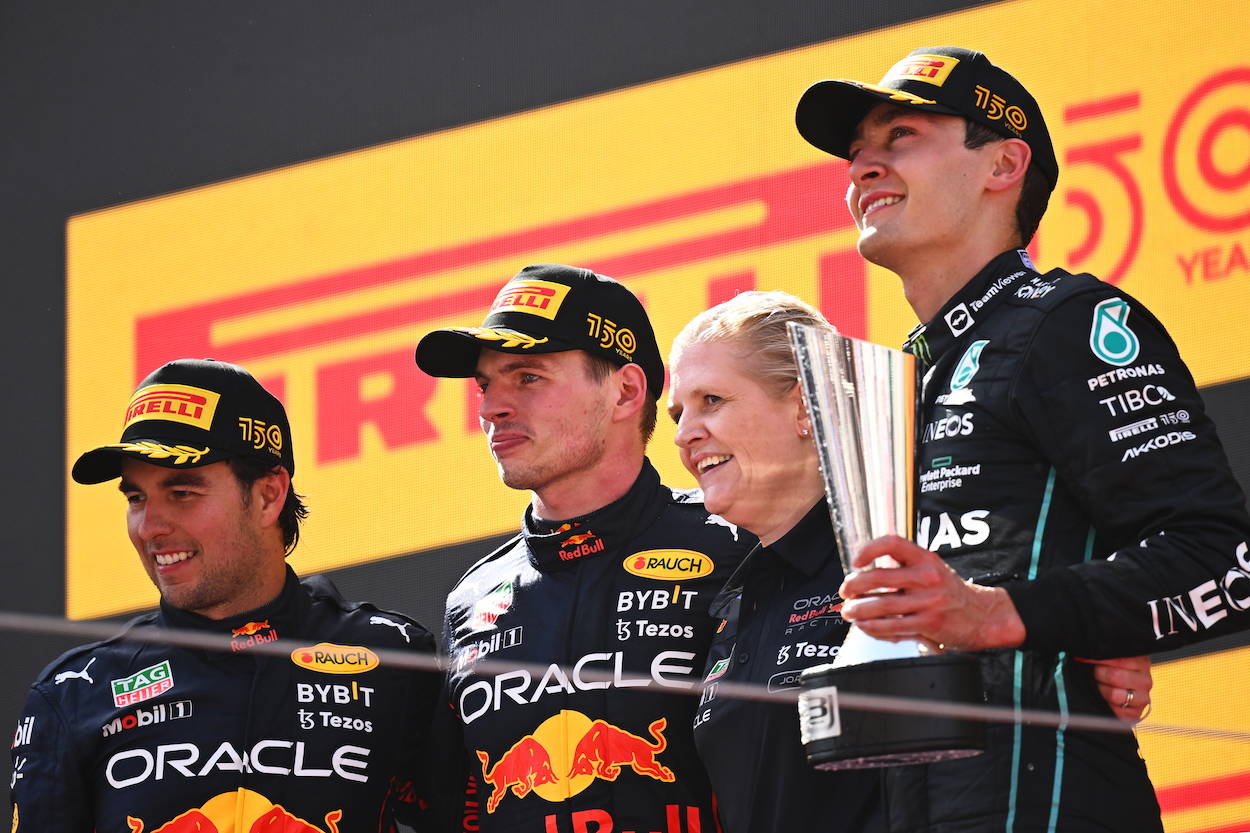 BARCELONA, SPAIN – MAY 22: Race winner Max Verstappen of the Netherlands and Oracle Red Bull Racing, Second placed Sergio Perez of Mexico and Oracle Red Bull Racing and Third placed George Russell of Great Britain and Mercedes celebrate on the podium during the 2022 Formula 1 Spanish Grand Prix at Circuit de Barcelona-Catalunya on May 22, 2022 in Barcelona, Spain. (Photo by Clive Mason/Getty Images) 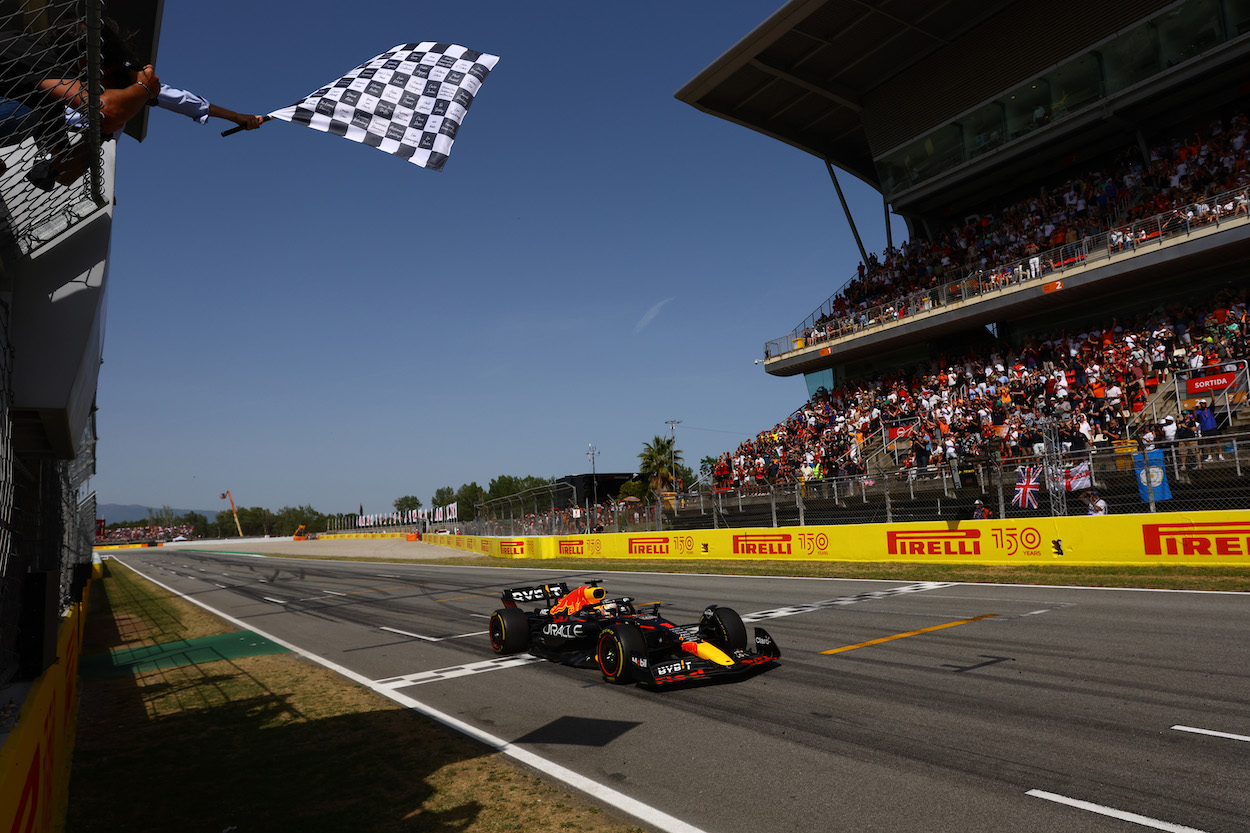 BARCELONA, SPAIN – MAY 22: <> during the 2022 Formula 1 Spanish Grand Prix at Circuit de Barcelona-Catalunya on May 22, 2022 in Barcelona, Spain. (Photo by Mark Thompson/Getty Images) 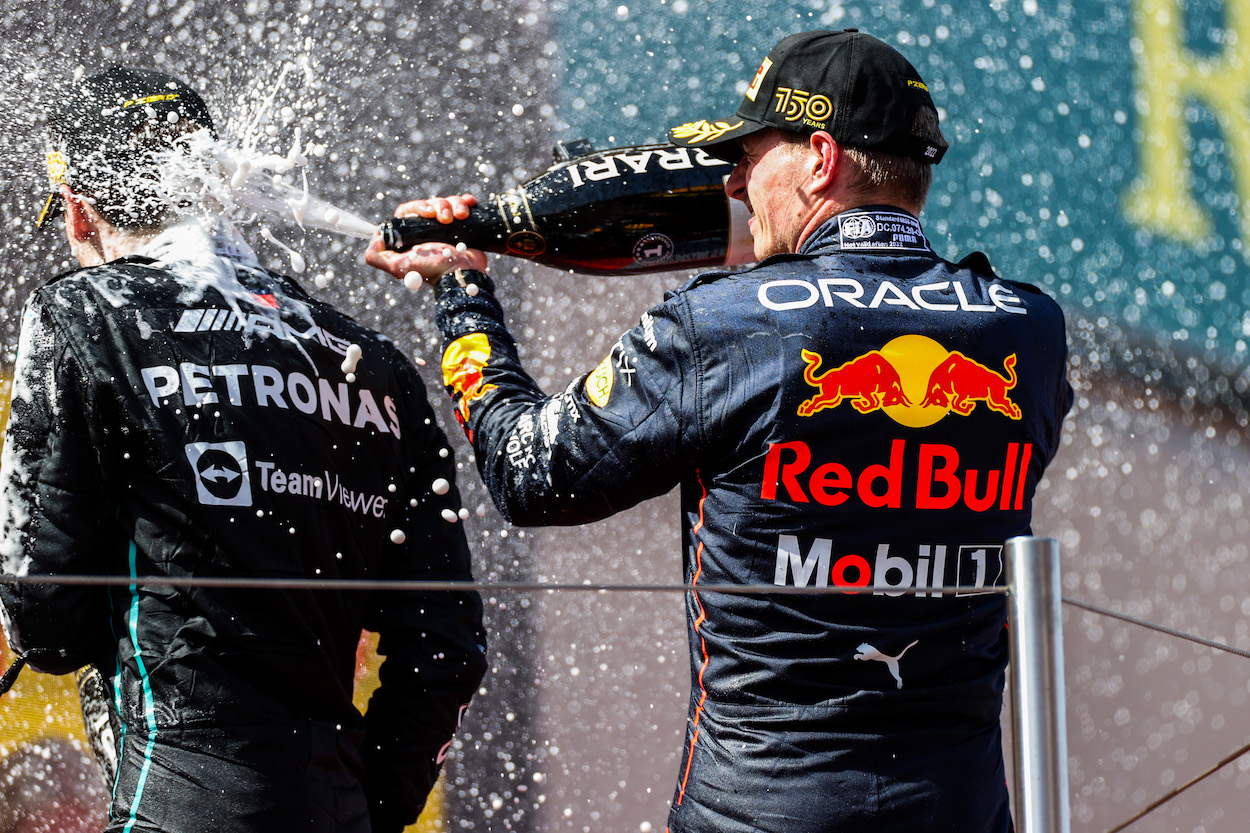 BARCELONA, SPAIN – MAY 22: Max Verstappen of Red Bull Racing and The Netherlands celebrates finishing in first during the F1 Grand Prix of Spain at Circuit de Barcelona-Catalunya on May 22, 2022 in Barcelona, Spain. (Photo by Peter Fox/Getty Images) 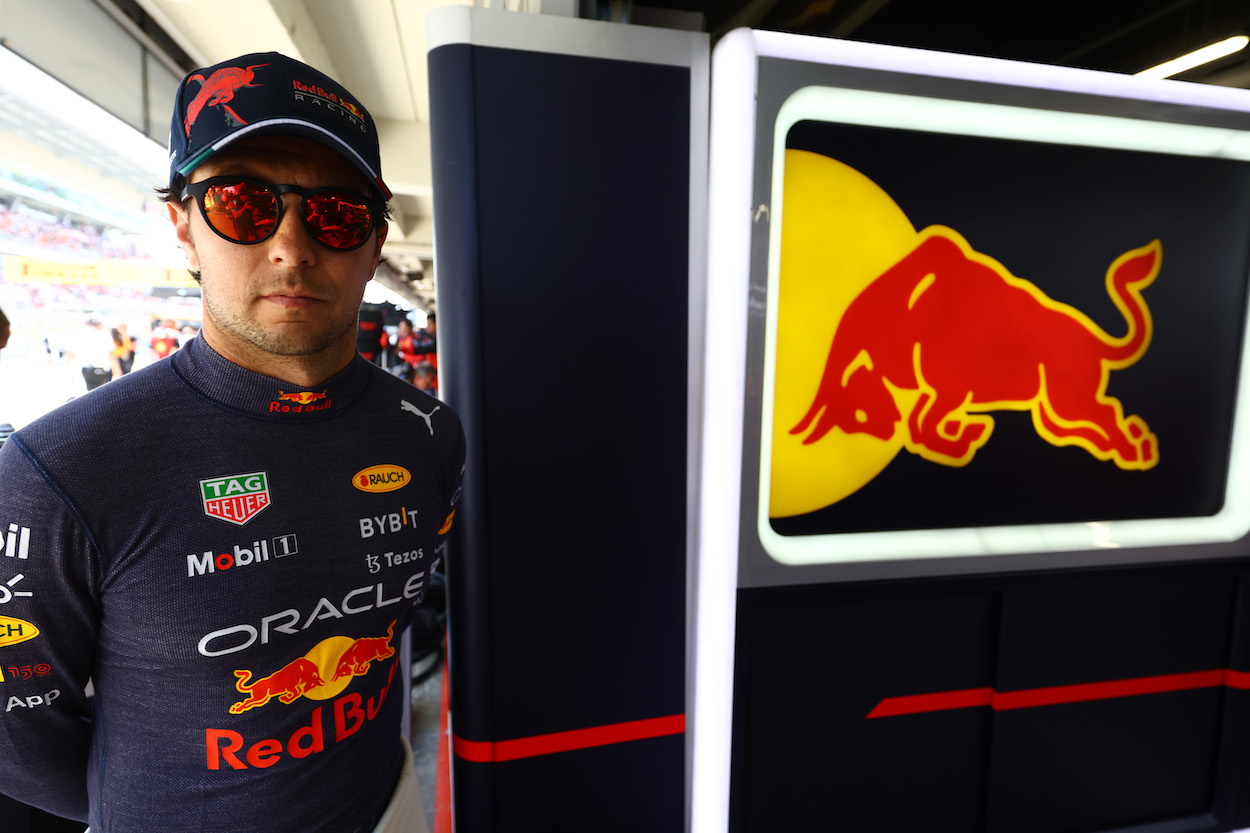 BARCELONA, SPAIN – MAY 22: <> during the F1 Grand Prix of Spain at Circuit de Barcelona-Catalunya on May 22, 2022 in Barcelona, Spain. (Photo by Mark Thompson/Getty Images) 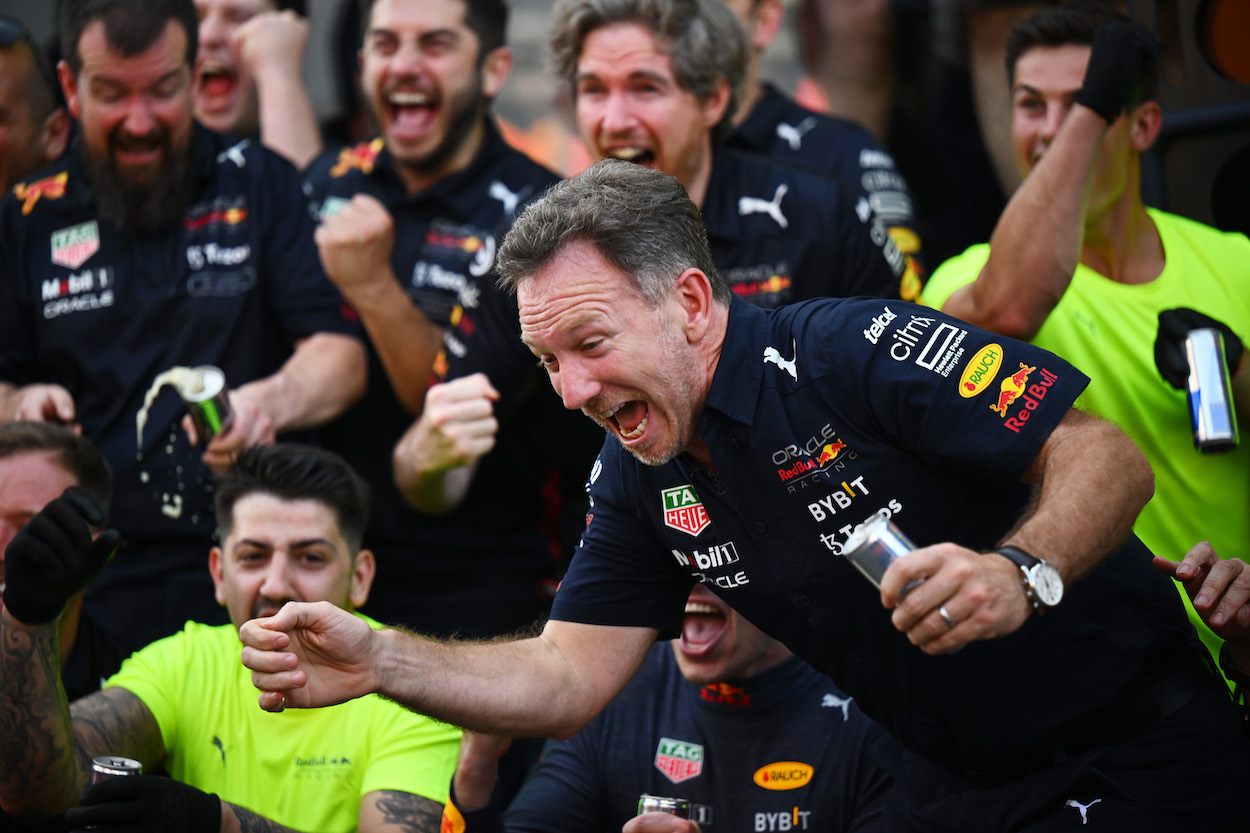