Scuderia AlphaTauri duo Yuki Tsunoda and Pierre Gasly dug in around the baking hot Circuit de Barcelona-Catalunya with the Japanese driver claiming a point in 10th and the Frenchman ending in 13th.

I’m extremely disappointed with today, it’s very frustrating. I had a small touch early on that damaged the car and from then on, I had no pace, we were losing downforce and sliding everywhere. I take responsibility for the accident with Stroll, I was pushing it to the limit, so I want to apologise to Lance for that. We tried everything we could from then on, but at the end of the day, there wasn’t much we could do.

That was a super tough race, it was so hot in the car today and then we were in a constant battle to make it into the points, so the pressure was there. I’m quite happy with my performance today and where we finished in the race, we haven’t been comfortable in the car the whole weekend, so to be fighting for points was a good step forward. However, I think we’ve still got a lot of work to do to be able to be higher up the midfield.

First of all, big congratulations to Oracle Red Bull Racing for this fantastic 1-2, which has helped Max in the close battle for the Championship. From our side, the weekend was quite difficult and we struggled with the car. We suffered from the rear, especially with the tyres overheating, therefore we couldn’t show a good performance yesterday in Qualifying. Because of this, today in the race we started only from P13 and 14. Fortunately, both drivers had a good start and came back in the first lap with Yuki in 11th and Pierre in 12th.

The race pace at the beginning was reasonable on the Softs, but after a few laps we decided to go for a three-stop strategy, so we called Yuki in to change to the Mediums. On this compound, he struggled a little bit to warm up the tyres, which meant he lost a few seconds to Alonso. Then we changed back to the Softs to end the race. We scored one point and I think that’s the most we could get out of this weekend after a difficult Qualifying session. As for Pierre, he was struggling with the car, suffering from an unstable rear, and was not able to fight for points this race. From the first laps onwards, he had damage on the front wing, which of course had a negative impact on the performance of the car.

We need to go away and analyse everything, to bring the car back to the level of performance we had in the past, trying to understand why we lose performance in hot conditions, also because we will have other races with very high temperatures – like Budapest for example. Now we go to Monaco, where we normally perform well, so I hope this will be the case again this year.” 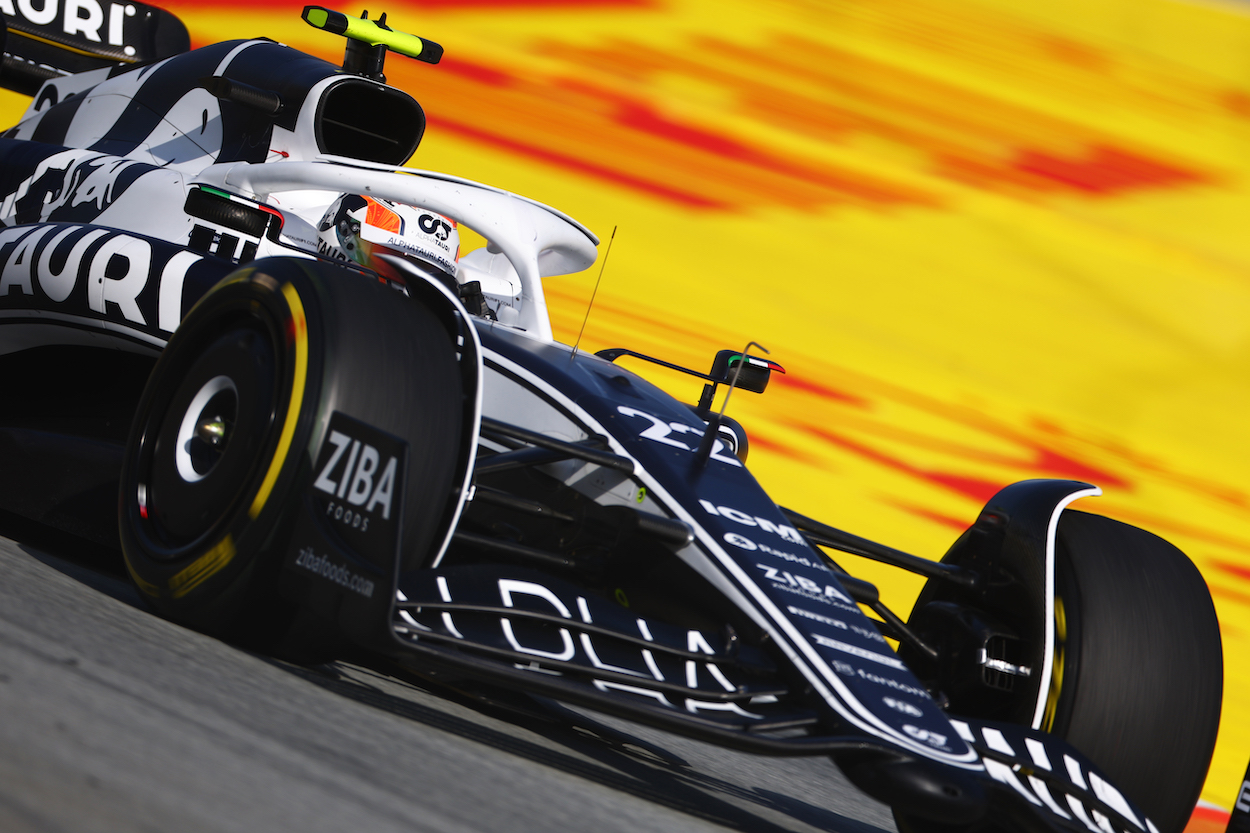 BARCELONA, SPAIN – MAY 20: Yuki Tsunoda of Japan driving the (22) Scuderia AlphaTauri AT03 on track during practice ahead of the 2022 Formula 1 Spanish Grand Prix at Circuit de Barcelona-Catalunya on May 20, 2022 in Barcelona, Spain. (Photo by Mark Thompson/Getty Images) 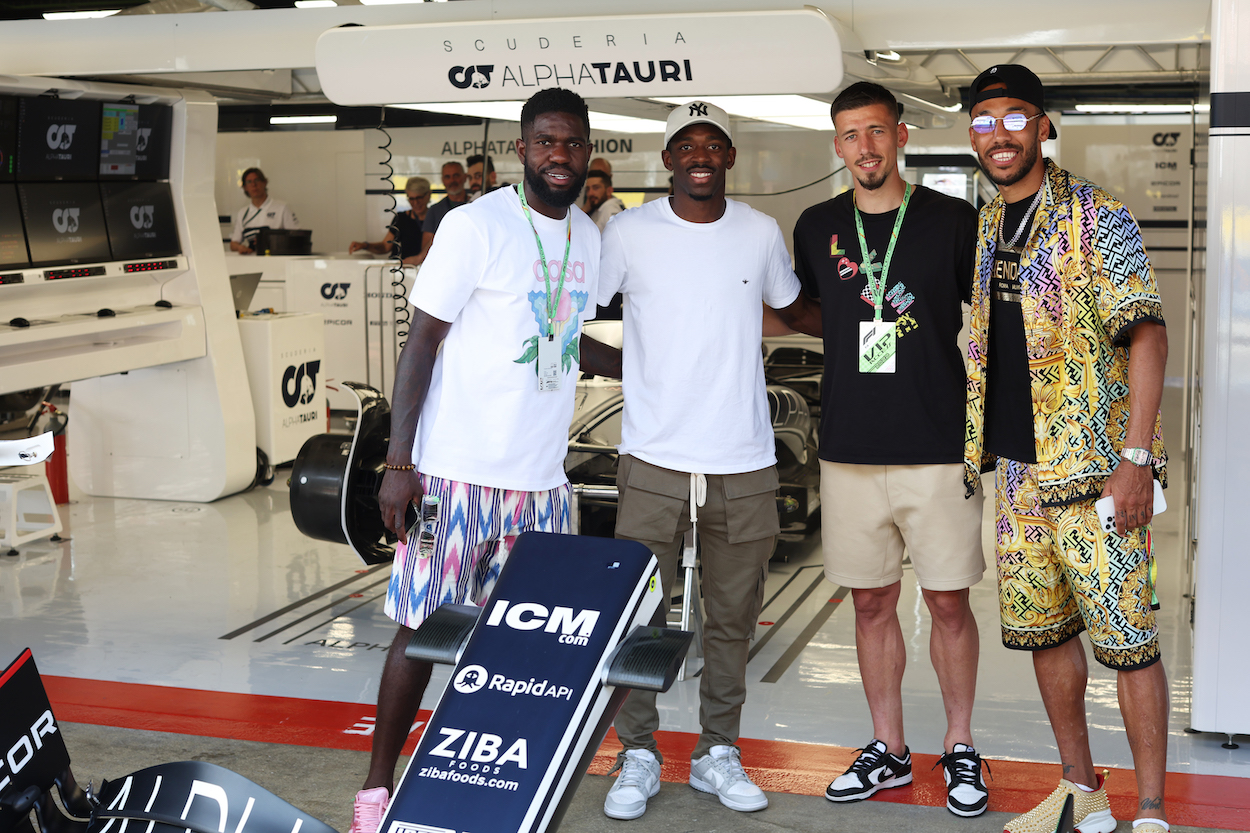 BARCELONA, SPAIN – MAY 21: (L-R) Samuel Umtiti, Ousmane Dembele, Clement Lenglet and Pierre-Emerick Aubameyang pose for a photo outside the Scuderia AlphaTauri garage during qualifying ahead of the F1 Grand Prix of Spain at Circuit de Barcelona-Catalunya on May 21, 2022 in Barcelona, Spain. (Photo by Peter Fox/Getty Images) 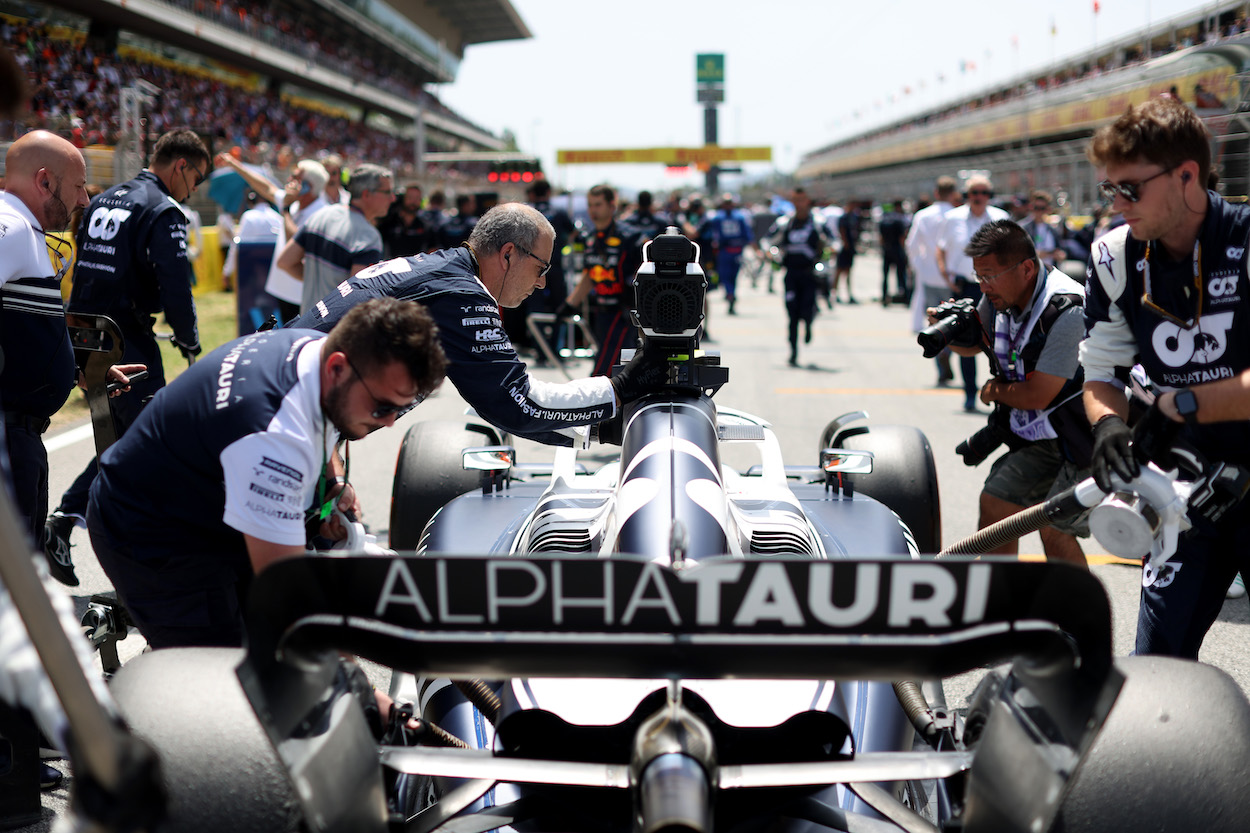 BARCELONA, SPAIN – MAY 22: The Scuderia AlphaTauri team prepare on the grid during the F1 Grand Prix of Spain at Circuit de Barcelona-Catalunya on May 22, 2022 in Barcelona, Spain. (Photo by Peter Fox/Getty Images) 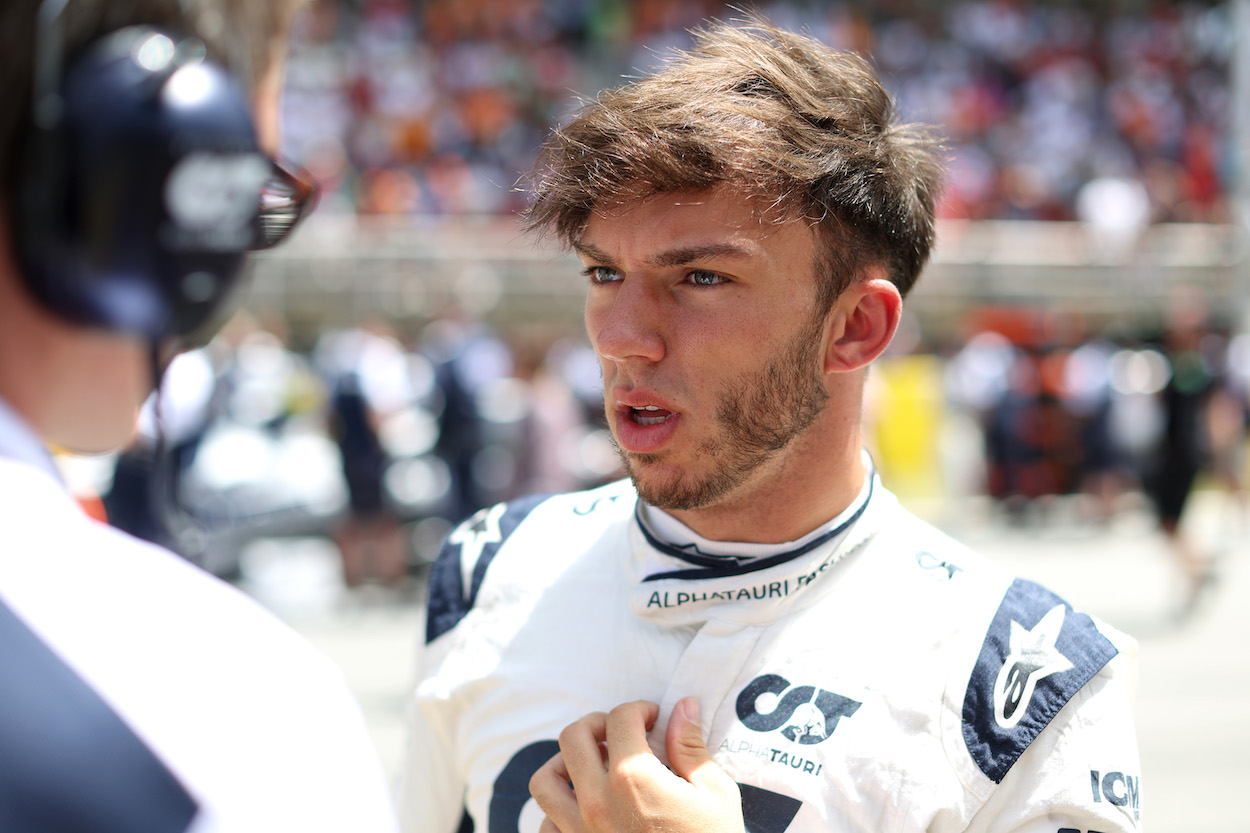 BARCELONA, SPAIN – MAY 22: Pierre Gasly of France driving the (10) Scuderia AlphaTauri AT03 prepares to drive on the grid during the 2022 Formula 1 Spanish Grand Prix at Circuit de Barcelona-Catalunya on May 22, 2022 in Barcelona, Spain. (Photo by Peter Fox/Getty Images) 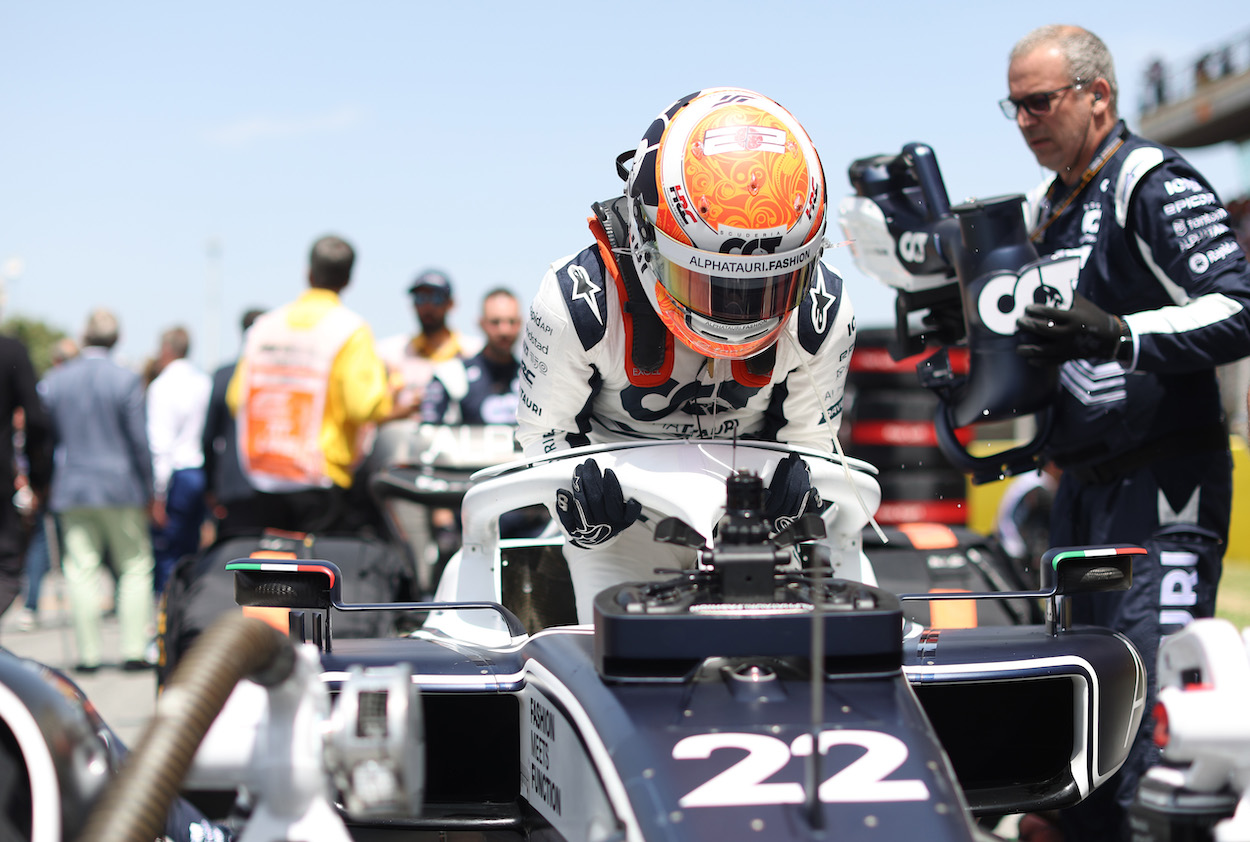 BARCELONA, SPAIN – MAY 22: Yuki Tsunoda of Japan and Scuderia AlphaTauri prepares to drive on the grid during the 2022 Formula 1 Spanish Grand Prix at Circuit de Barcelona-Catalunya on May 22, 2022 in Barcelona, Spain. (Photo by Peter Fox/Getty Images)