Max Verstappen recovered from a slow pit stop in Sunday’s race at Austin to seal his 13th victory of the season at the 2022 Formula 1 United States Grand Prix, securing Red Bull’s first constructors’ title since 2013.

Having moved into the lead at the start, avoiding the drama behind as Carlos Sainz and George Russell clashed at Turn 1, Verstappen had looked set for a comfortable victory at the Circuit of The Americas, dealing with multiple Safety Car restarts and managing his pace expertly.

But a slow final pit stop opened the door for Hamilton and the recovering Charles Leclerc, the reigning world champion having to pass both of them to take the chequered flag first – his move on Hamilton coming with just six laps remaining.

Despite his sterling efforts, Hamilton had to settle for second place, with Mercedes waiting for a 2022 victory, while Leclerc salvaged a podium finish for Ferrari as the Italian team mathematically dropped out of contention for the constructors’ crown.

Leclerc benefitted from a cheap stop under an early Safety Car – brought out by Valtteri Bottas’s spin into the gravel – to rise from P12 on the grid after his power unit changes, with Perez taking fourth after his own engine penalty.

Russell took a five-second time penalty for his incident with Sainz en route to fifth, pitting late on to set the fastest lap on soft tyres, having held enough of a window over sixth-placed McLaren driver Lando Norris.

Fernando Alonso bounced back from an engine penalty and a dramatic collision with Lance Stroll midway through the race, which briefly sent him airborne, to claim the seventh position, followed by Aston Martin’s Sebastian Vettel and the one-stopping Haas of Kevin Magnussen.

Like Verstappen, Vettel’s efforts were dented by a slow final stop and, having initially held a strong points position. He had to fight his way back to eighth, passing Magnussen at the final corner on the final lap – earning the ‘Driver of the Day’ award in the process. However, a post-race 30-second penalty following a protest would ultimately drop Alonso to P15, as the drivers in between all moved up a spot.

AlphaTauri driver Yuki Tsunoda, who started at the back of the grid after an engine penalty, also used the drama to his advantage to take a point in 10th (later elevated to P9), ahead of Alpine’s Esteban Ocon (who started from the pits), Williams’ Alex Albon and Alfa Romeo’s Zhou Guanyu.

After his qualifying woes, Pierre Gasly experienced another dramatic race, picking up a time penalty behind the Safety Car that was not served properly in the pits, leaving him to come home in 13th once Alonso’s penalty had been applied.

Mick Schumacher could not repeat teammate Magnussen’s points-scoring efforts on the more conventional two-stop strategy as he took P15 (later P14), with the McLaren of Daniel Ricciardo and Williams of Nicholas Latifi the final cars to finish behind Alonso.

With Max Verstappen winning the race and his team clinching another constructors’ championship, we offer our congratulations to Red Bull Racing, obviously, along with our condolences for the sad passing of Dietrich Mateschitz. The race today was an intense one, interrupted by two safety cars that helped to reduce tyre degradation – which we nonetheless observed was lower than expected in these warm conditions. The strategy proved to be all-important once again, with Lewis Hamilton attempting to undercut Verstappen and the race coming down to a breath-taking duel between them. Before, we also saw a great fight between Verstappen and Ferrari’s Charles Leclerc. The two drivers on different compounds during the final stint were a real point of interest for the huge American crowd; around 440,000 people were treated to a thrilling battle to the finish. Both drivers pushed to the maximum, but their tyres were certainly up to the fight.

Red Bull’s Max Verstappen took the lead at the first corner, having started on the P Zero Yellow medium tyre – the same choice that was made by 16 of the 20 starters. Verstappen pitted for P Zero White hard tyres from the lead and then emerged back in front shortly after Hamilton made a similar stop. Having survived two safety car restarts with his advantage intact, Verstappen made his second stop for another set of medium tyres 20 laps from the end, dropping behind Hamilton – on the hard tyre for the final stint – after a problem in the pits. Chasing down the Mercedes driver, Verstappen eventually won the race by four seconds after managing his tyres perfectly and sealing the 2022 constructors’ title for Red Bull. 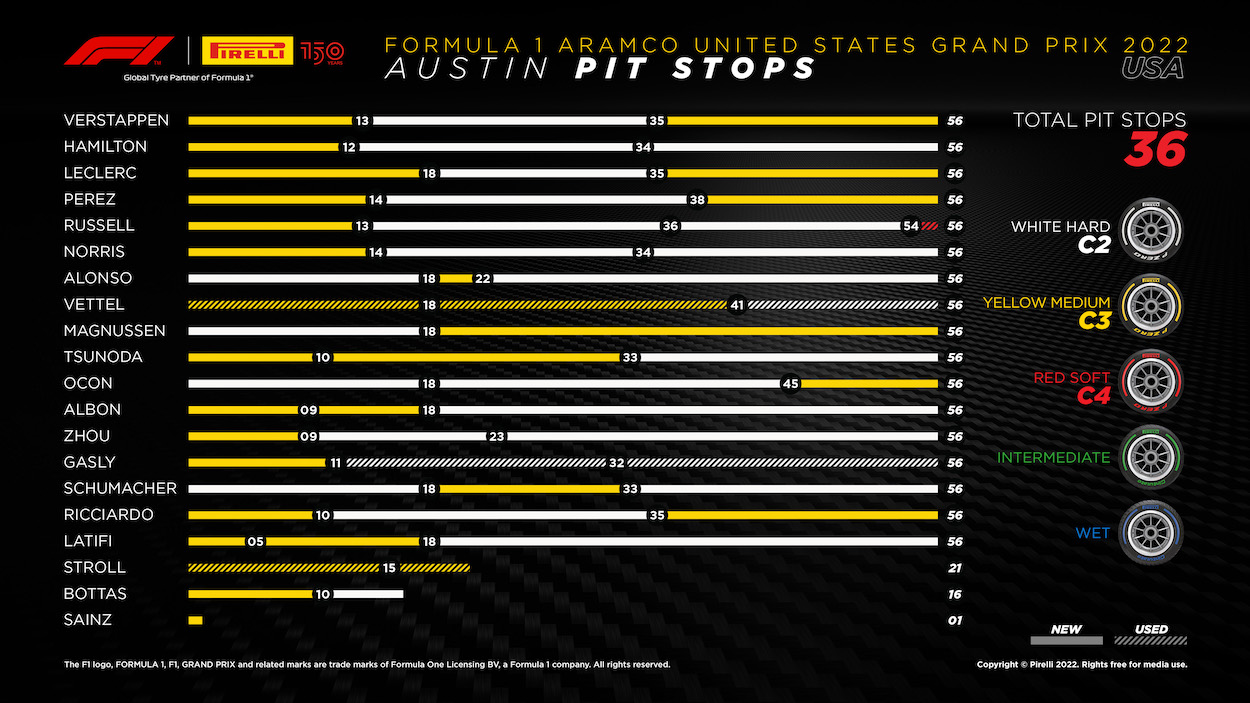 Haas’s Kevin Magnussen was the highest-placed driver on the grid to start on the hard tyres (from P13) and was the only driver to stop just once, finishing in the points after completing a long 38-lap final stint on the medium tyres. Mercedes driver George Russell was the only driver to stop three times and use the P Zero Red soft tyre, which he fitted two laps from the end to claim an extra championship point for the fastest lap. 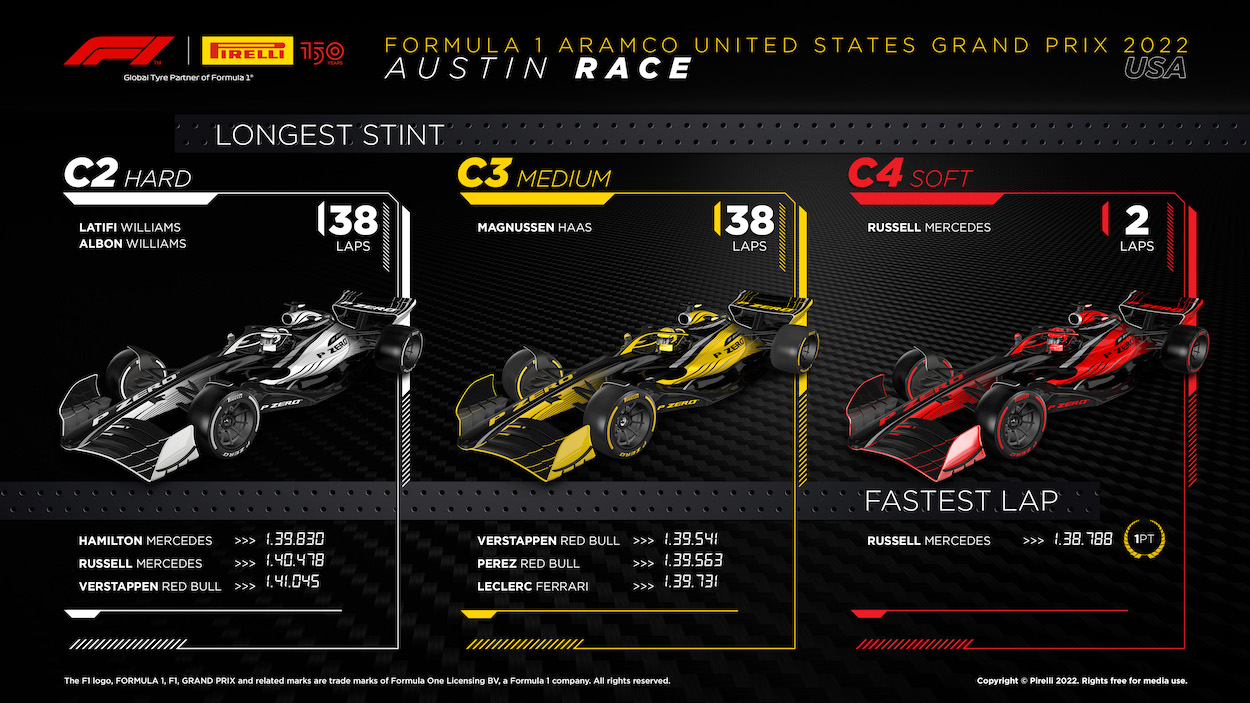