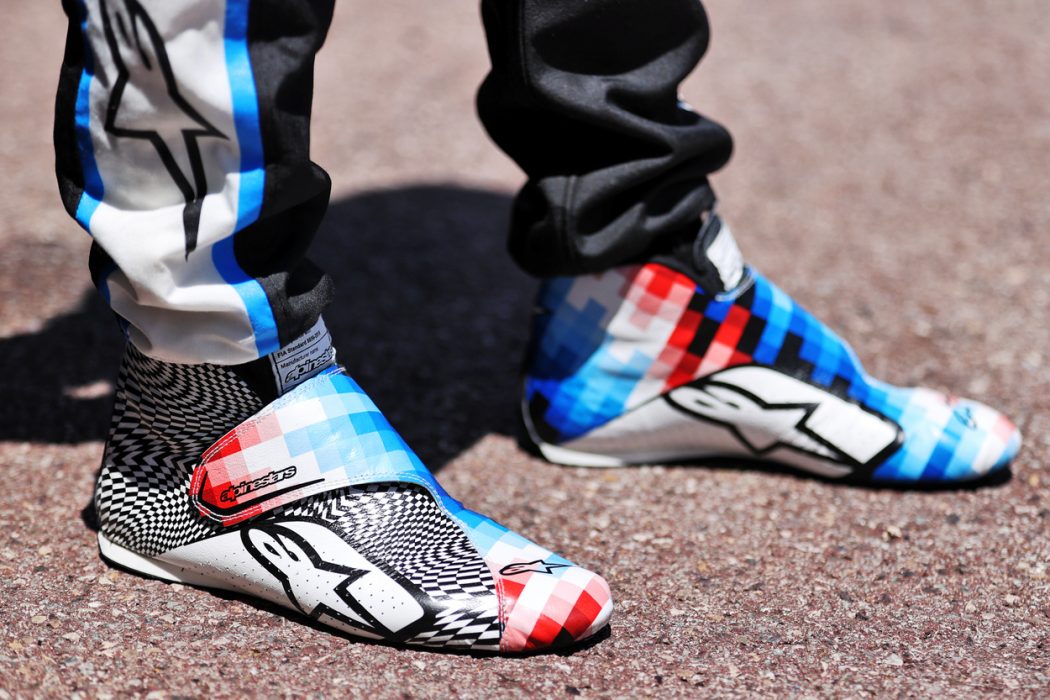 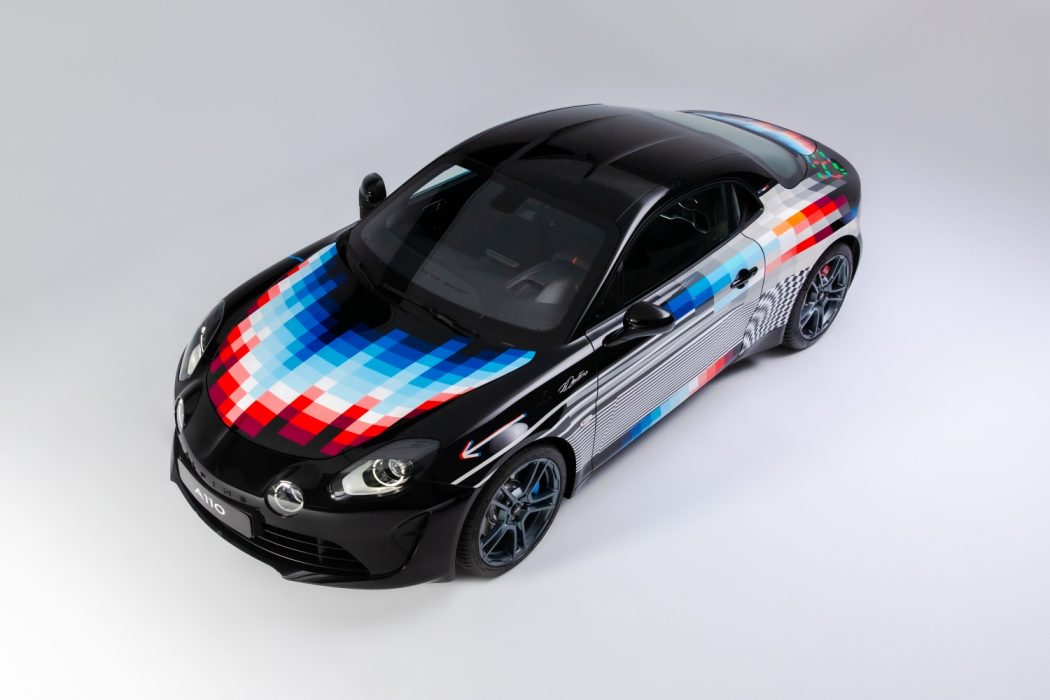 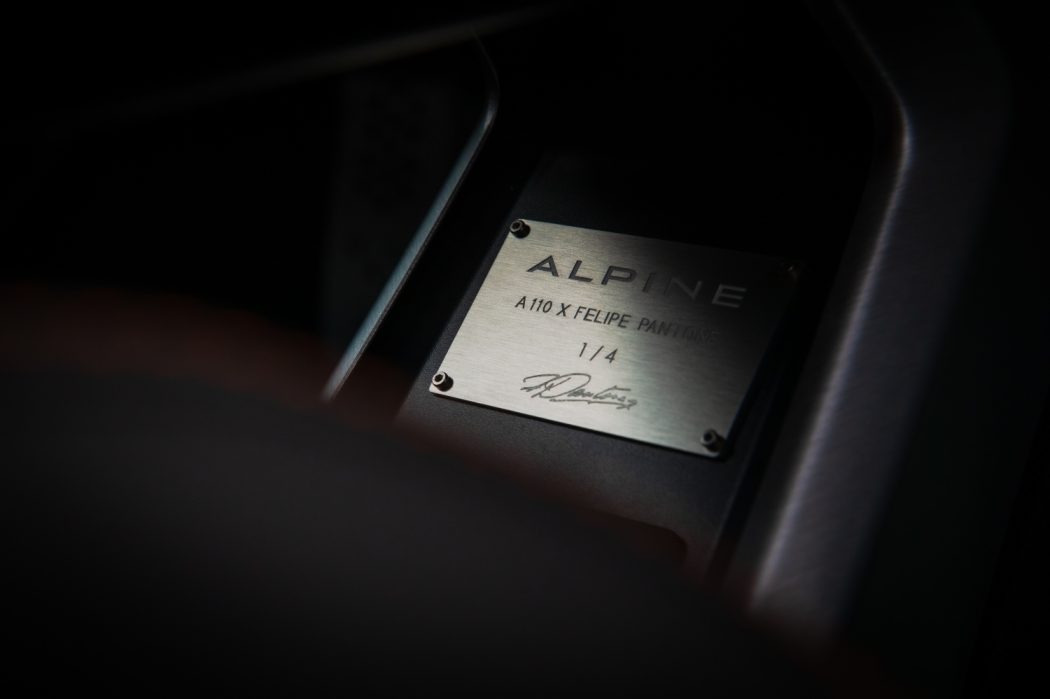 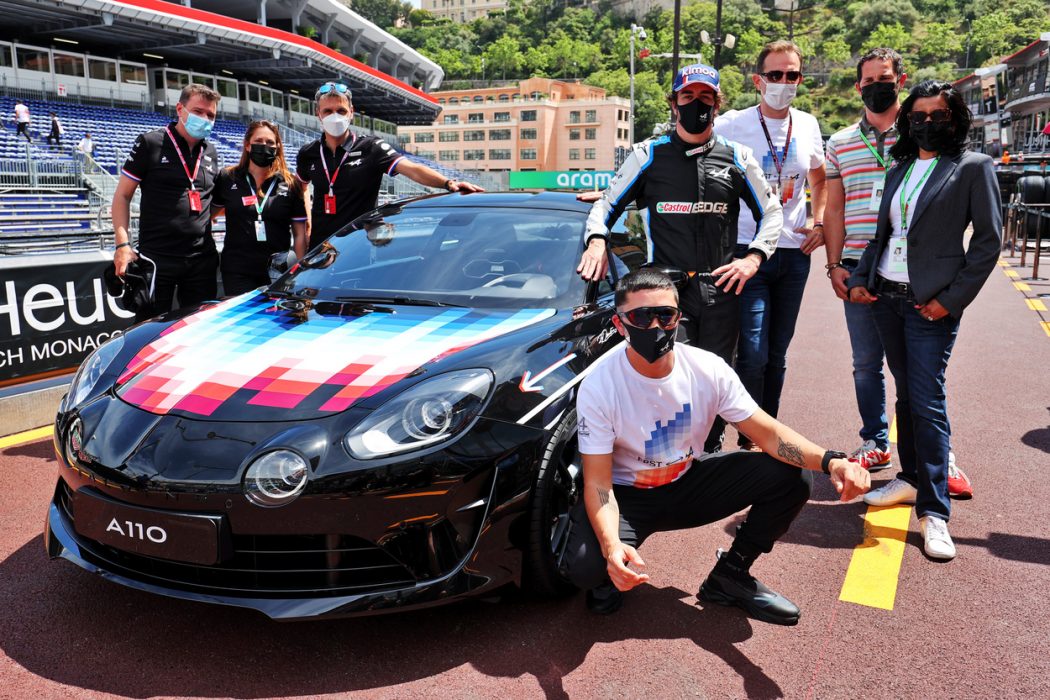 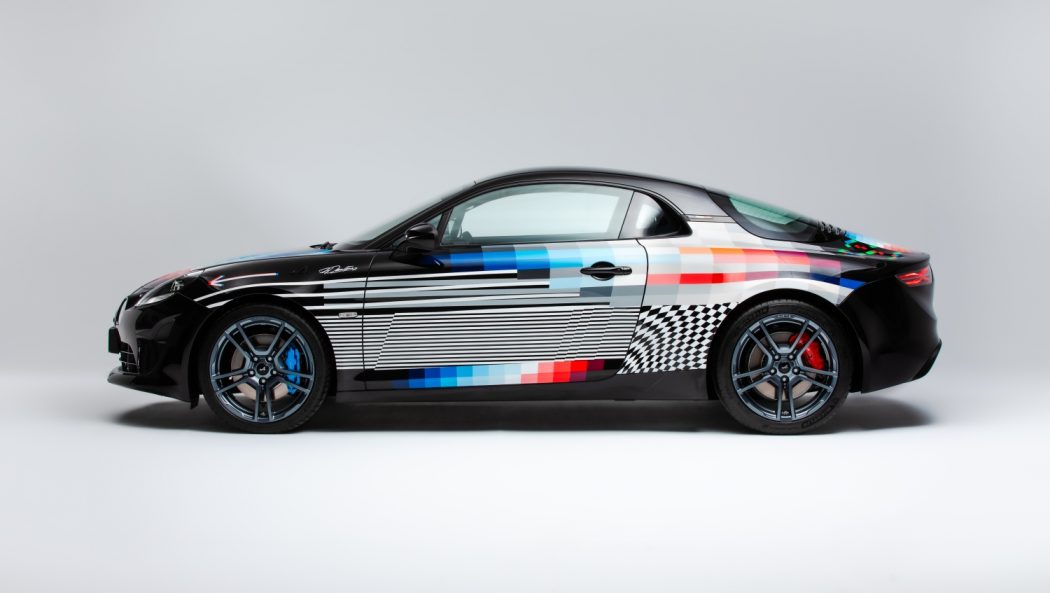 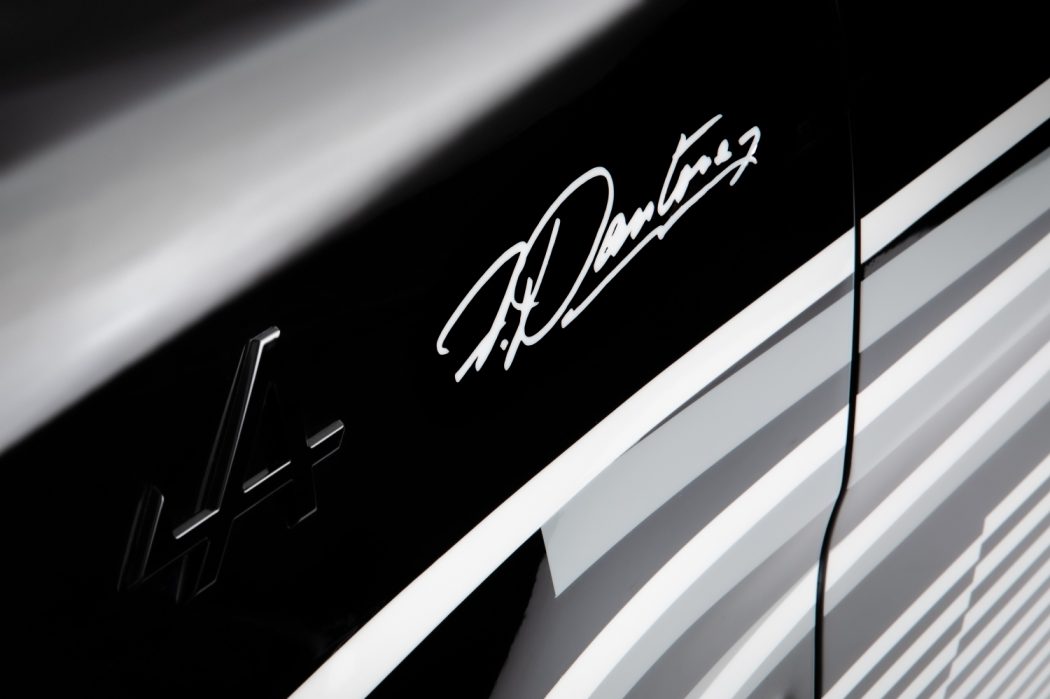 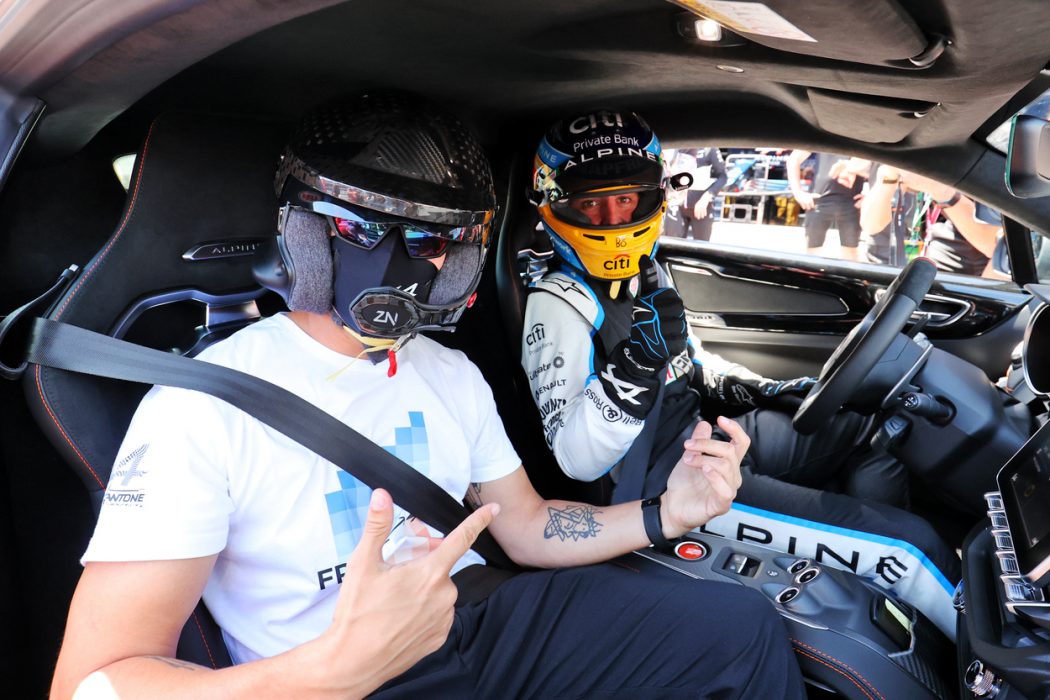 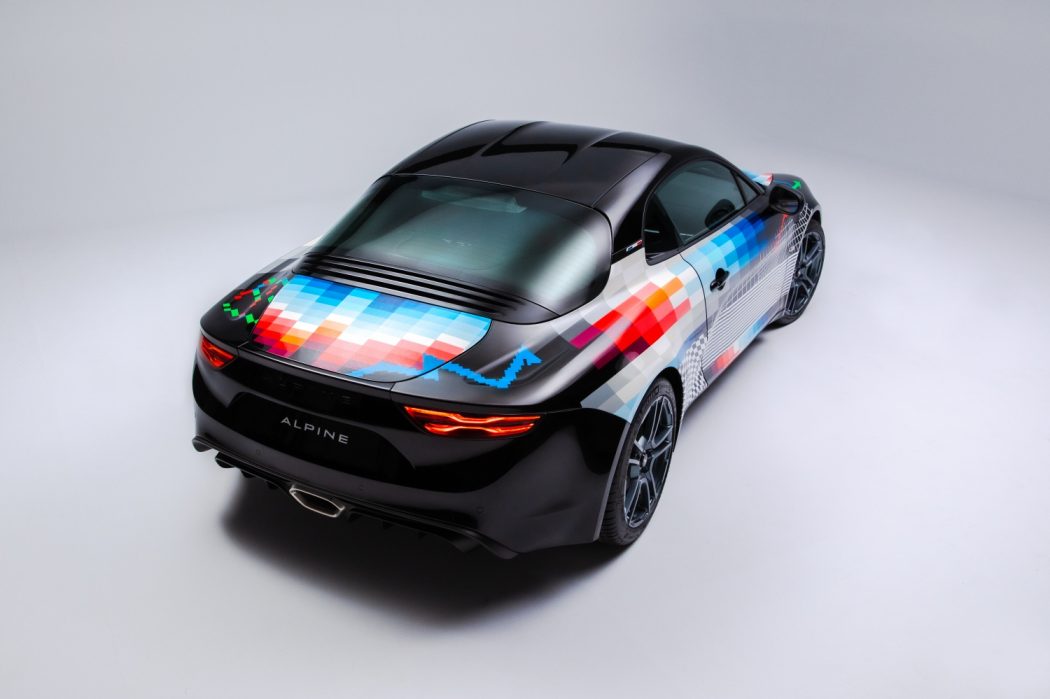 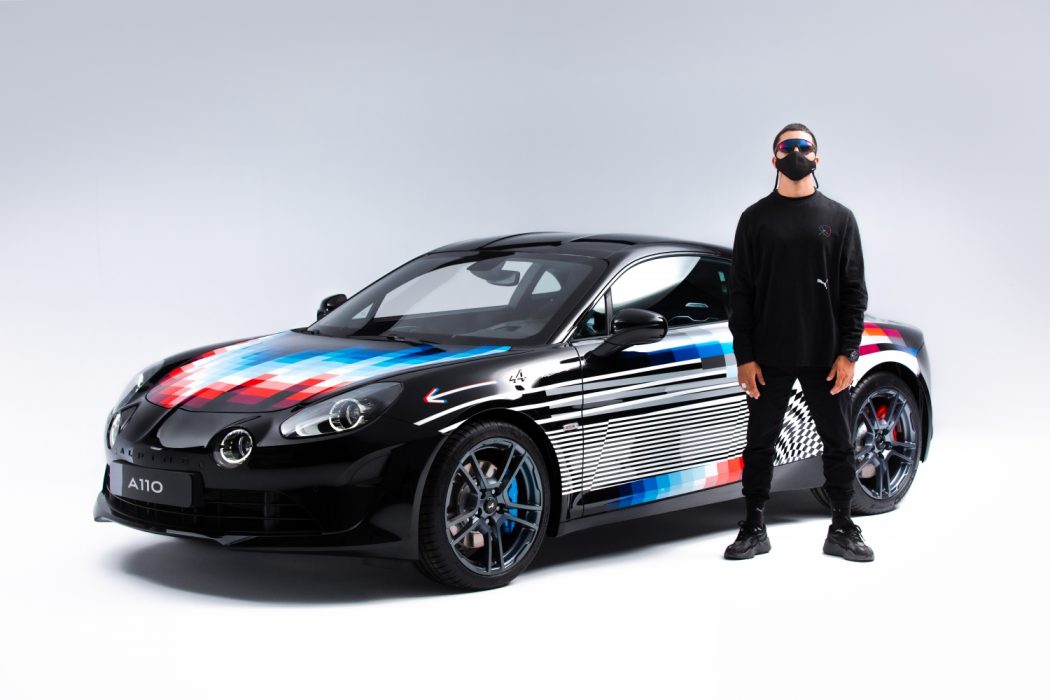 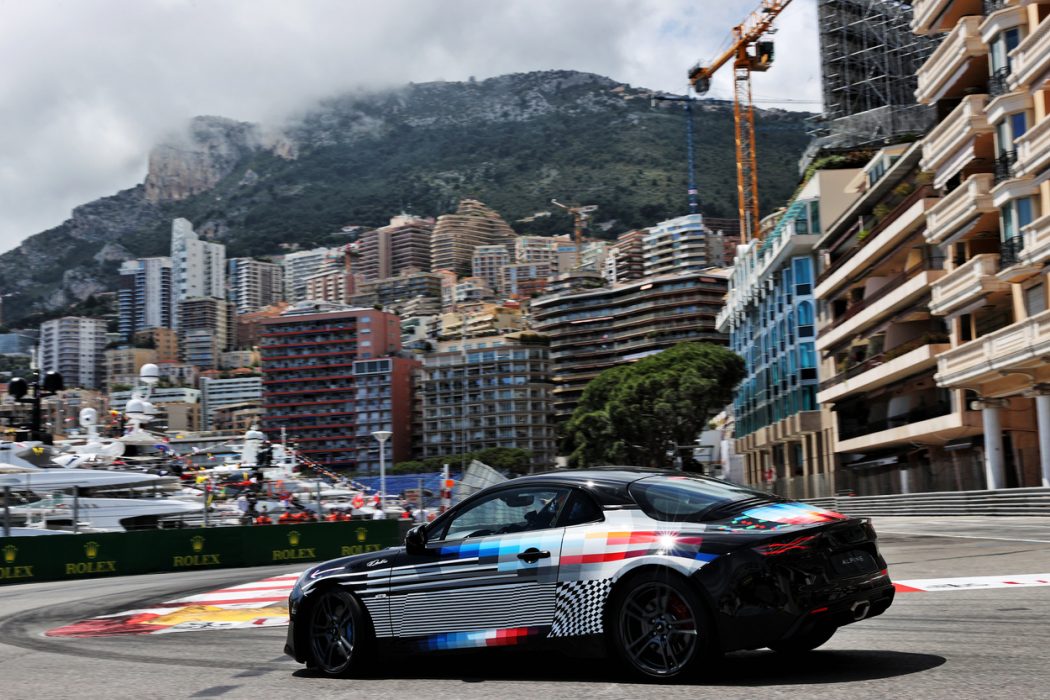 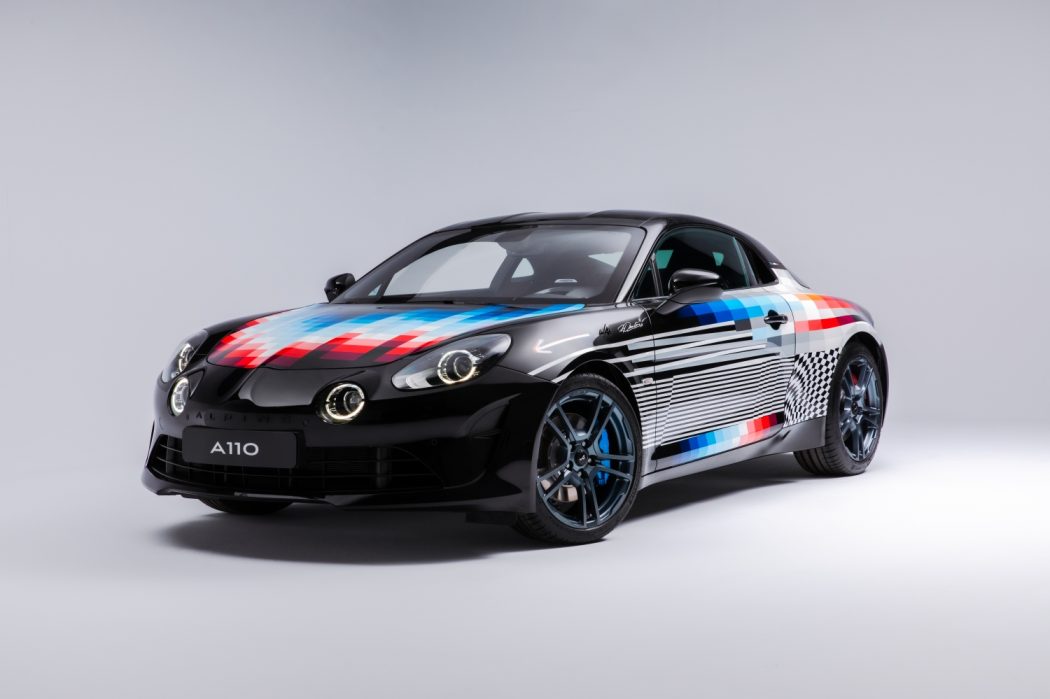 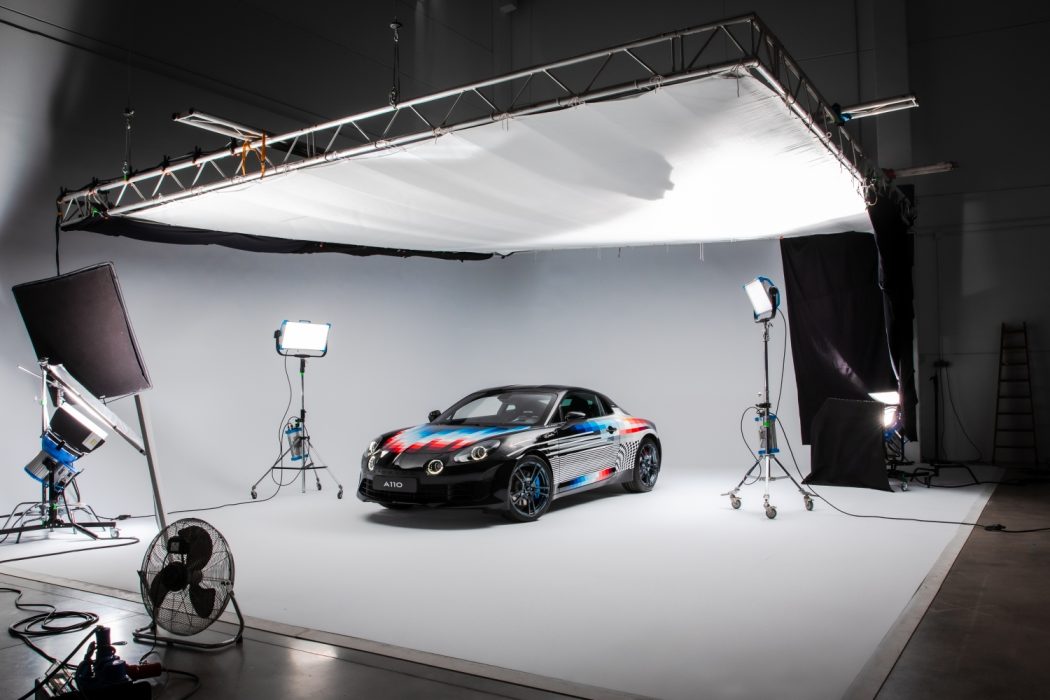 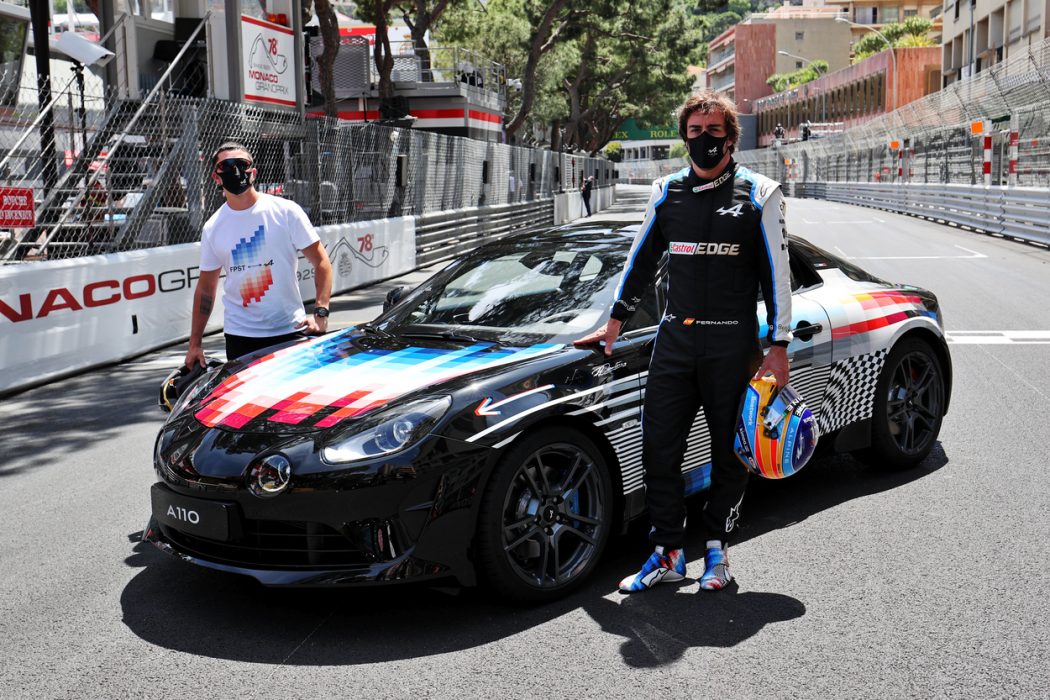 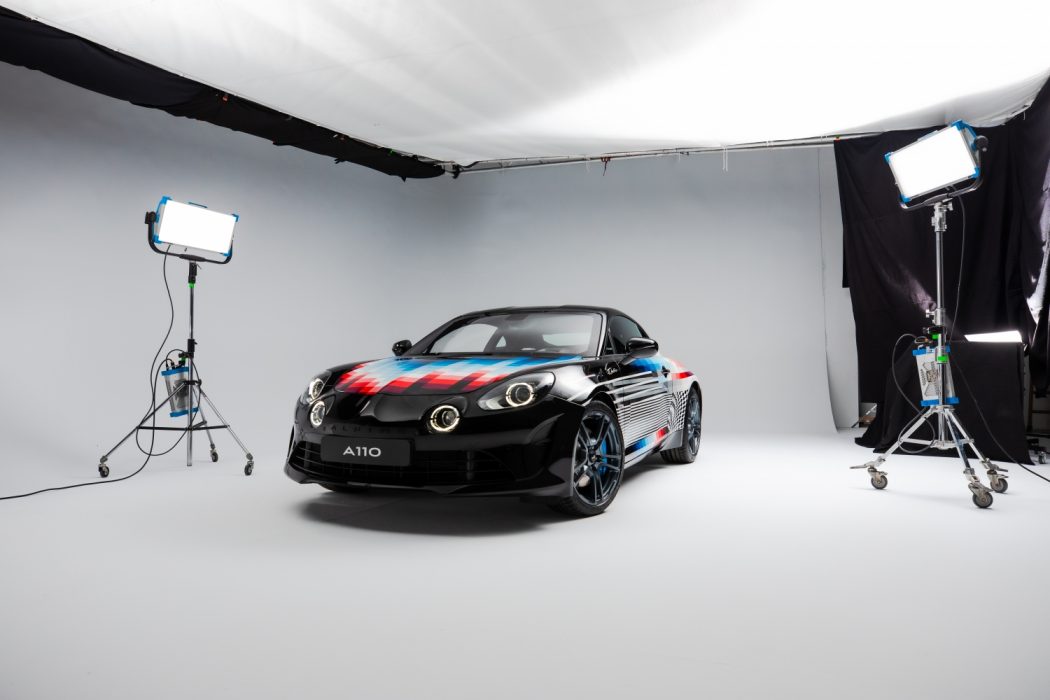 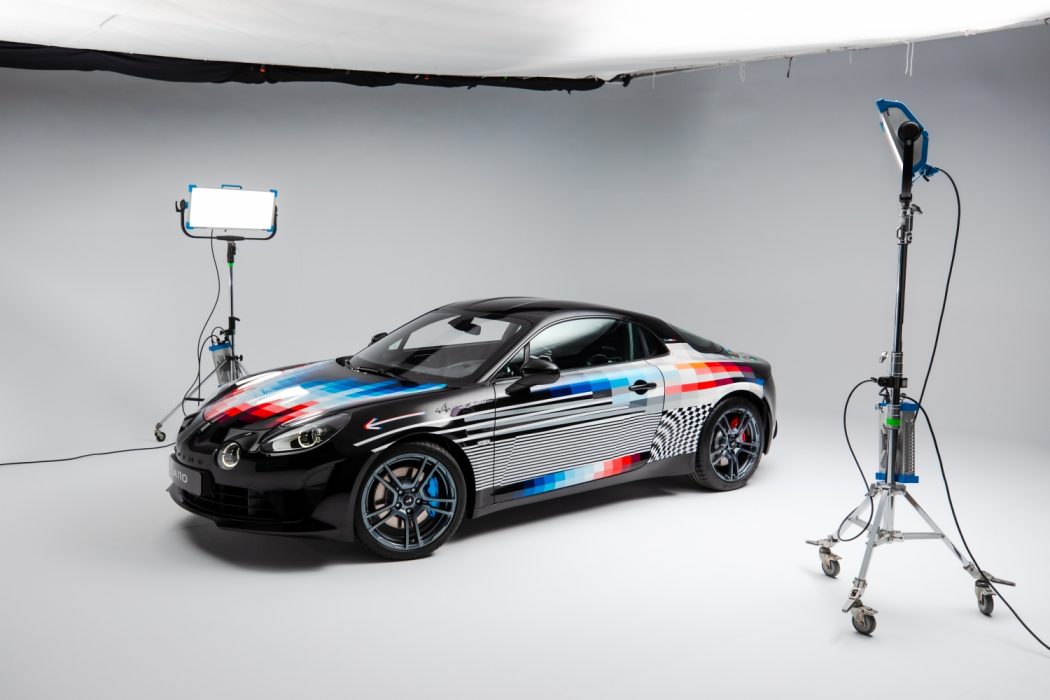 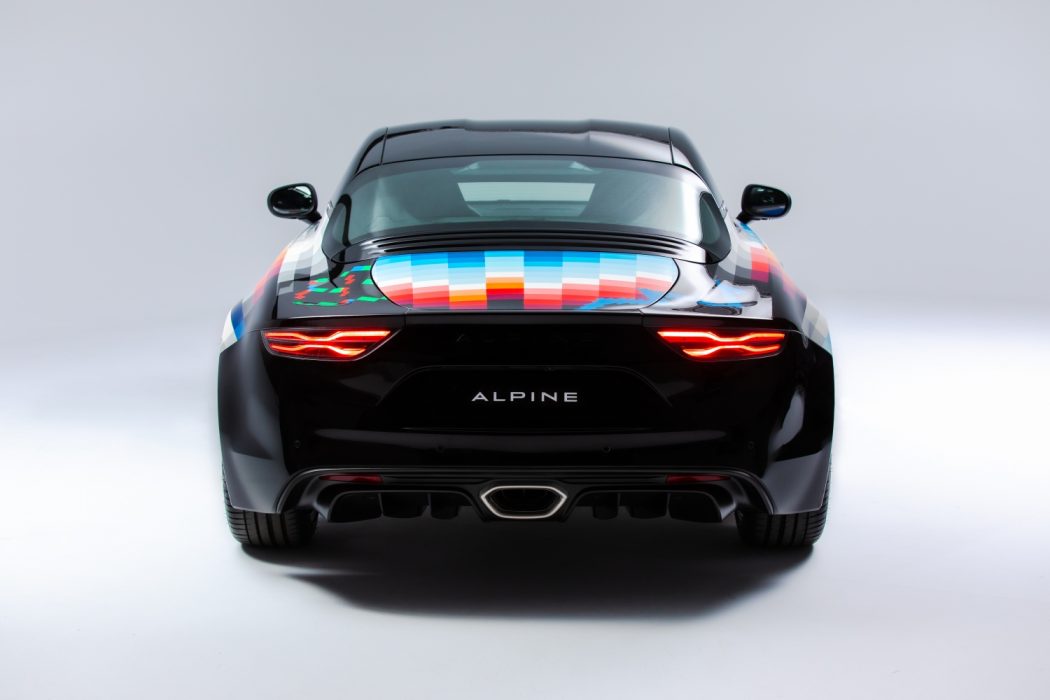 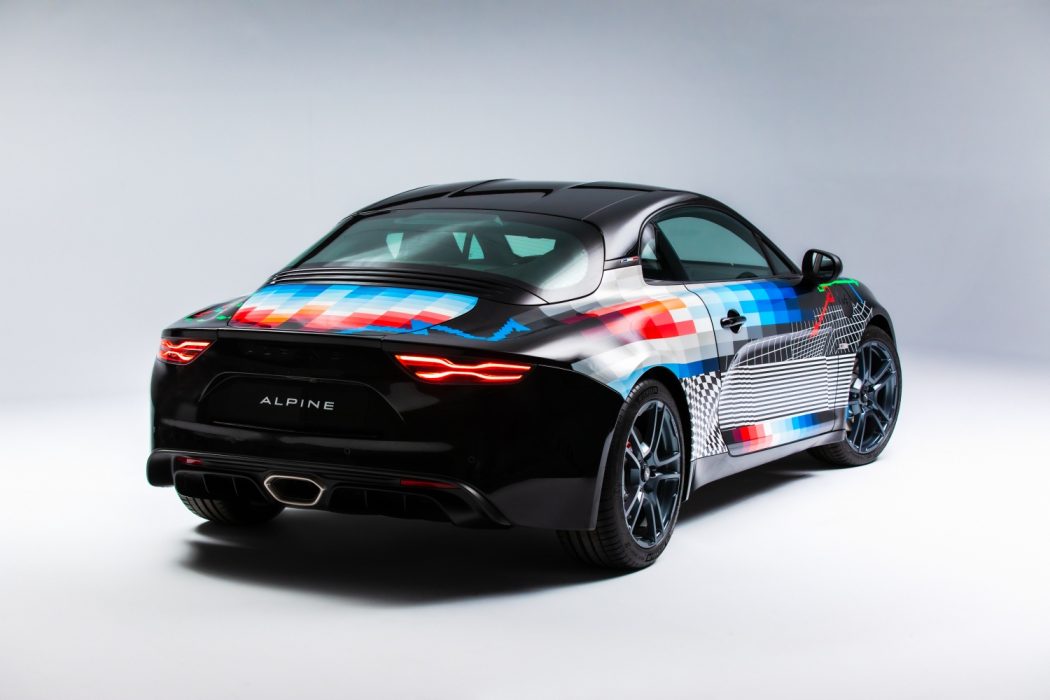 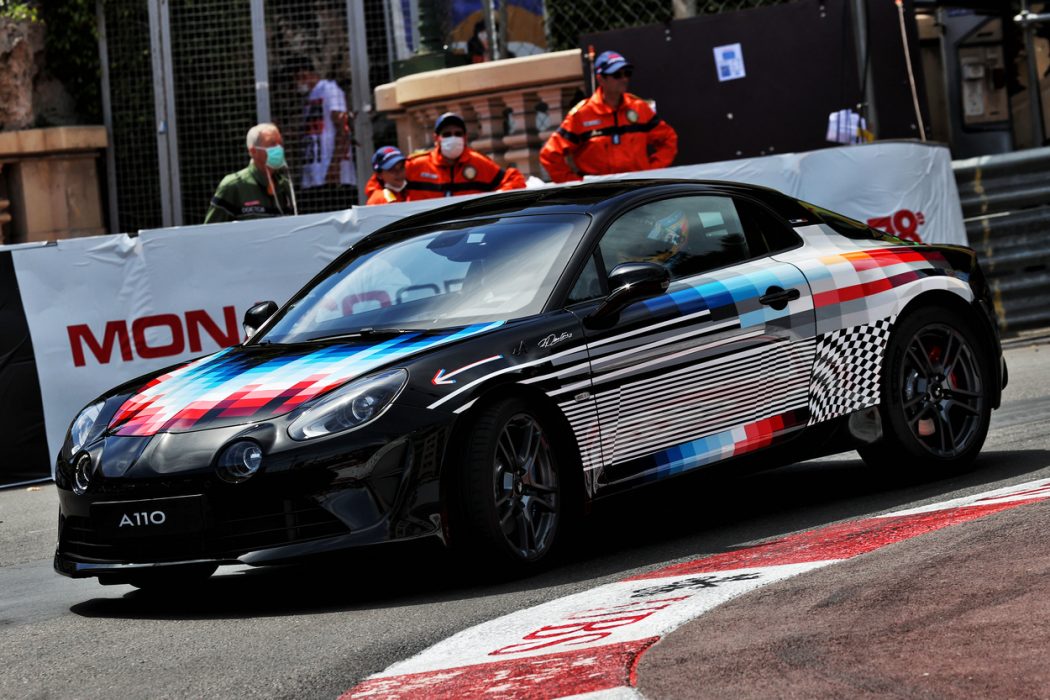 From the sidelines of the Monaco Grand Prix, Alpine unveils an exceptional A110 designed by Felipe Pantone, the second collaboration piece to debut since the partnership with the artist began in April.

The first collaboration “Alpine F1 x Felipe Pantone” was presented a few weeks ago, where Felipe Pantone delivered his artistic interpretation of Formula 1 with Alpine on a 1/2 scale model that was exhibited on the first floor of the Atelier Renault dedicated to Alpine.

Now, the second collaboration between Alpine and Felipe Pantone showcases a piece of Felipe Pantone’s work on the Alpine A110, the brand’s iconic model. Before tackling this project, Felipe Pantone spent long hours studying the brand and its history, as well as driving an Alpine A110 to feel the unique personality of the French sports coupe. The result is a modern, dynamic and elegant interpretation of the A110. The graphic lines follow the shape of the A110 which give an impression of speed even when the car stands still. It also features the signature colours of Felipe Pantone, black and white.

My idea regarding the work on the A110 is to evoke a sense of “ultradynamism”. Visual speed is something that I have been investigating for years now and I feel it really comes together on this car, emphasising its brilliant design with a fast, technological look.

The paint job on the body, carried out entirely by hand by the artist, represents several weeks of work. For even greater exclusivity, each of the three models offered for sale will feature subtle graphic variations to make each of these A110s a unique piece.

“Through this second collaboration with Alpine, Felipe Pantone once again demonstrates the extent of his talent. The creative work and its execution are exceptional. The colour schemes, geometric shapes and optical effects reveal the A110 in a new light, with a heightened sense of movement. This work results in a modern, dynamic and captivating work of art” said Cédric Journel, Vice President Sales and Marketing, Alpine.

Approved for road use, these unique works of art are targeted at collectors and lovers of beautiful objects as opposed to track fans. The conditions of access to acquire one of the three works will be communicated at a later date.

Alpine F1 Team in the colours of Felipe Pantone, plus hot laps with Fernando Alonso

To reveal the result of this collaboration, Fernando Alonso got behind the wheel of the A110 x Felipe Pantone and took the artist for a hot lap session on the Monaco Grand Prix track. This was an opportunity for Fernando Alonso and Felipe Pantone to discuss their common passion for beautiful automotive objects and Formula One.

In addition, to celebrate the second collaboration, the Alpine F1 Team is pictured wearing the colours of Felipe Pantone with typical graphic elements. This graphic signature is particularly evident on the motorhome and the nose of the A521s which will be present at the beginning of the Monaco Grand Prix this weekend.

Founded in 1955 by Jean Rédélé, Alpine has established itself over the years with its French-style sports cars. In 2017, the brand presents the new A110, a sports car faithful to Alpine’s timeless principles of compactness, lightness, agility and driving pleasure. In 2021, the Alpine Business Unit is created. It becomes the brand dedicated to innovative, authentic and exclusive sports cars of the Renault Group, benefiting from the heritage and know-how of its historic Dieppe plant as well as the engineering expertise of the Alpine Racing teams and from Alpine Cars.