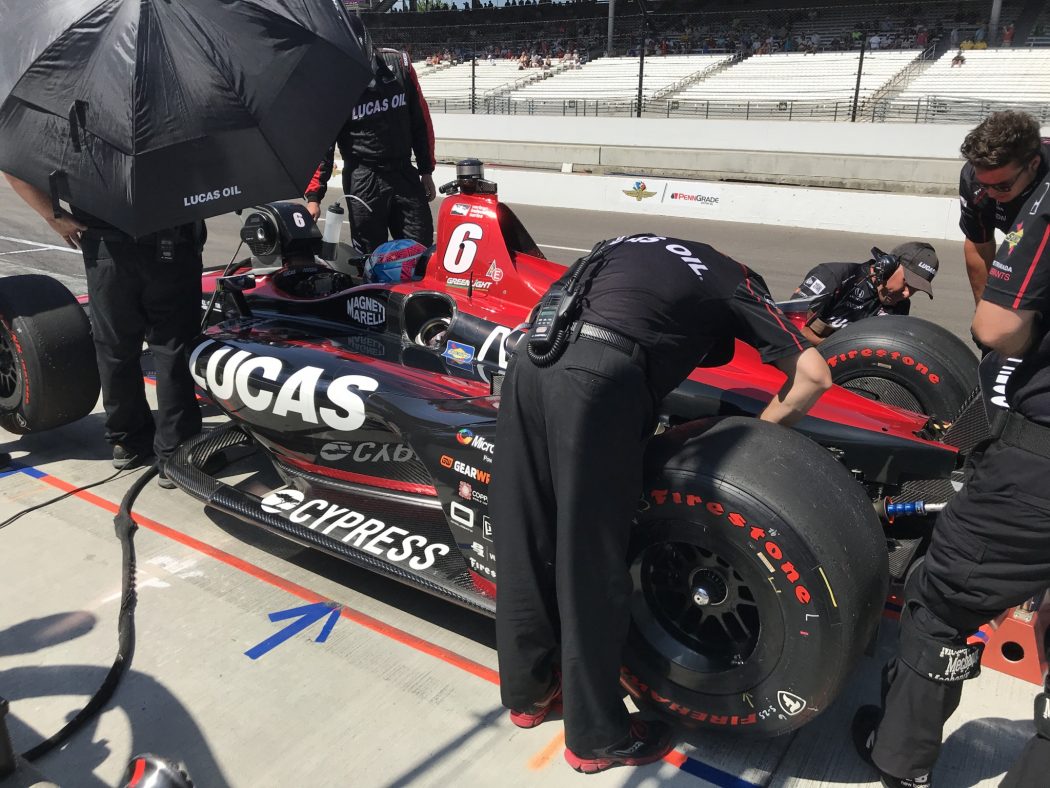 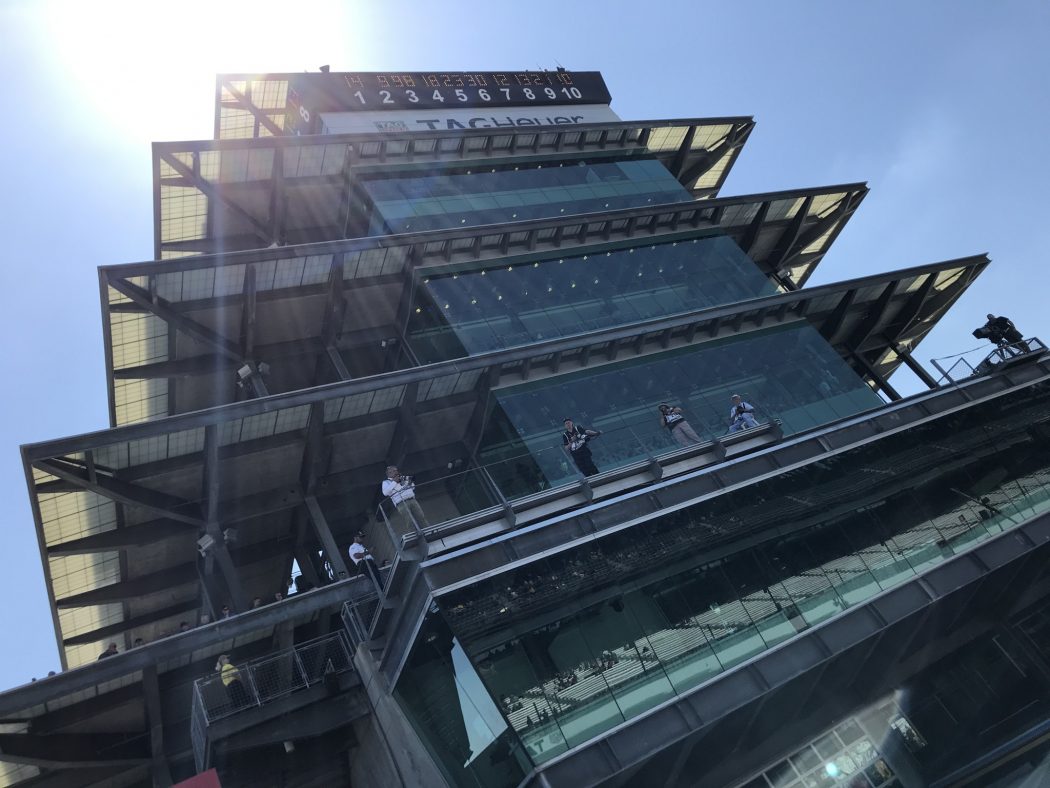 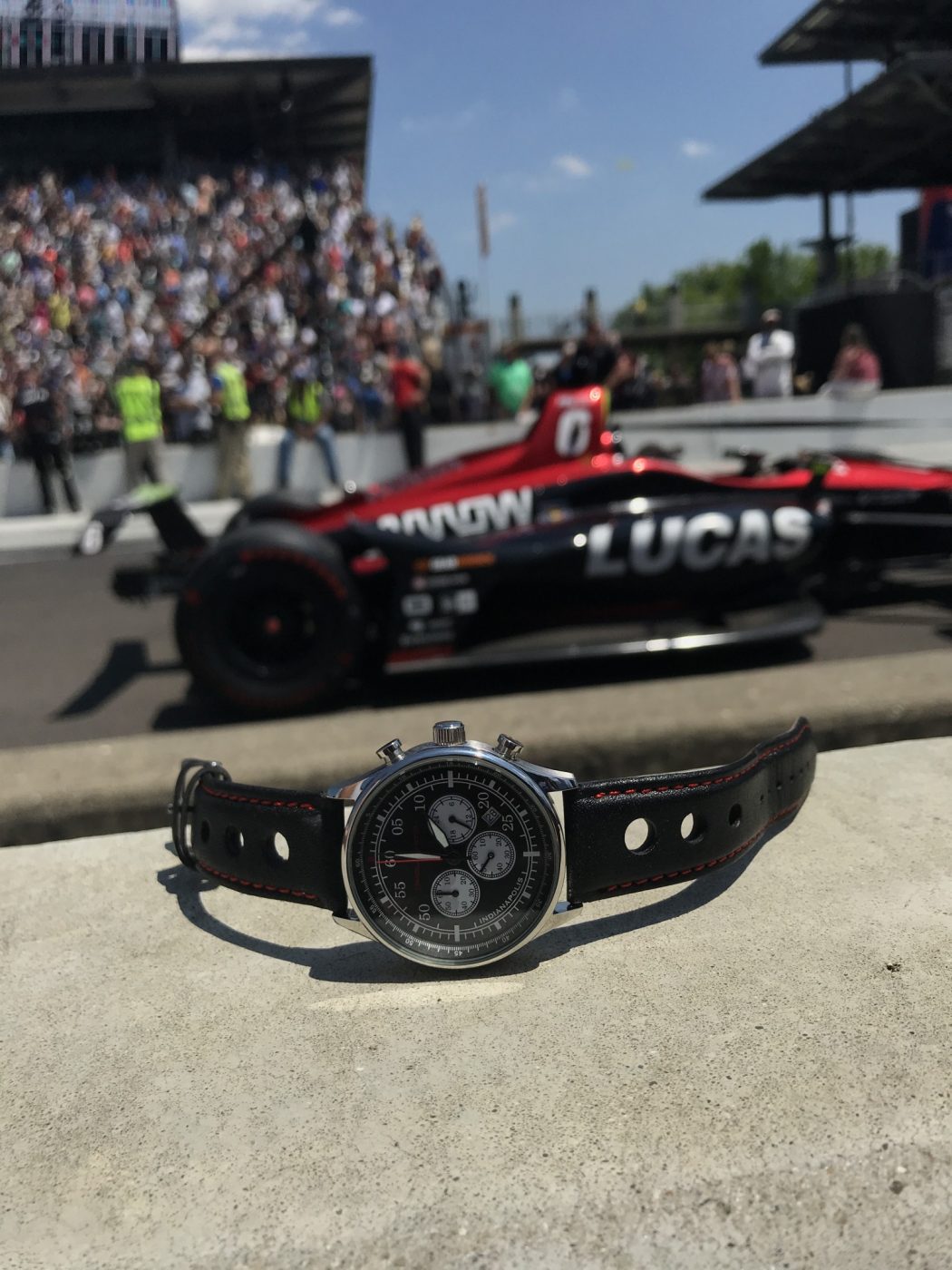 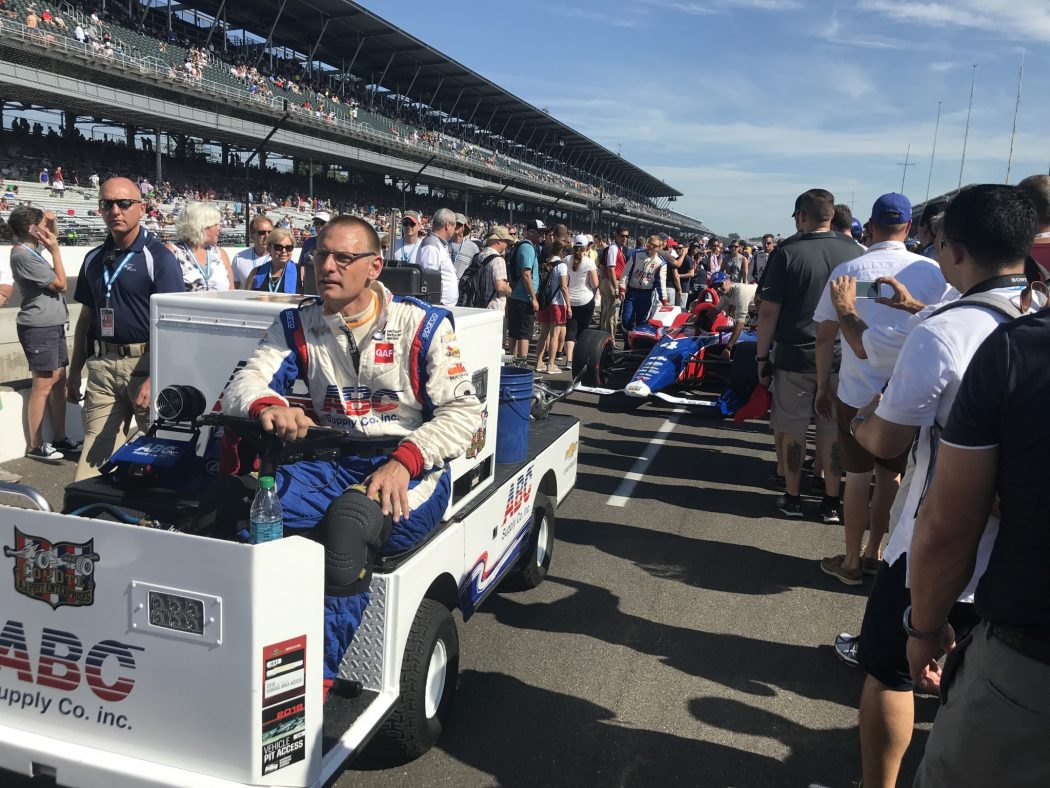 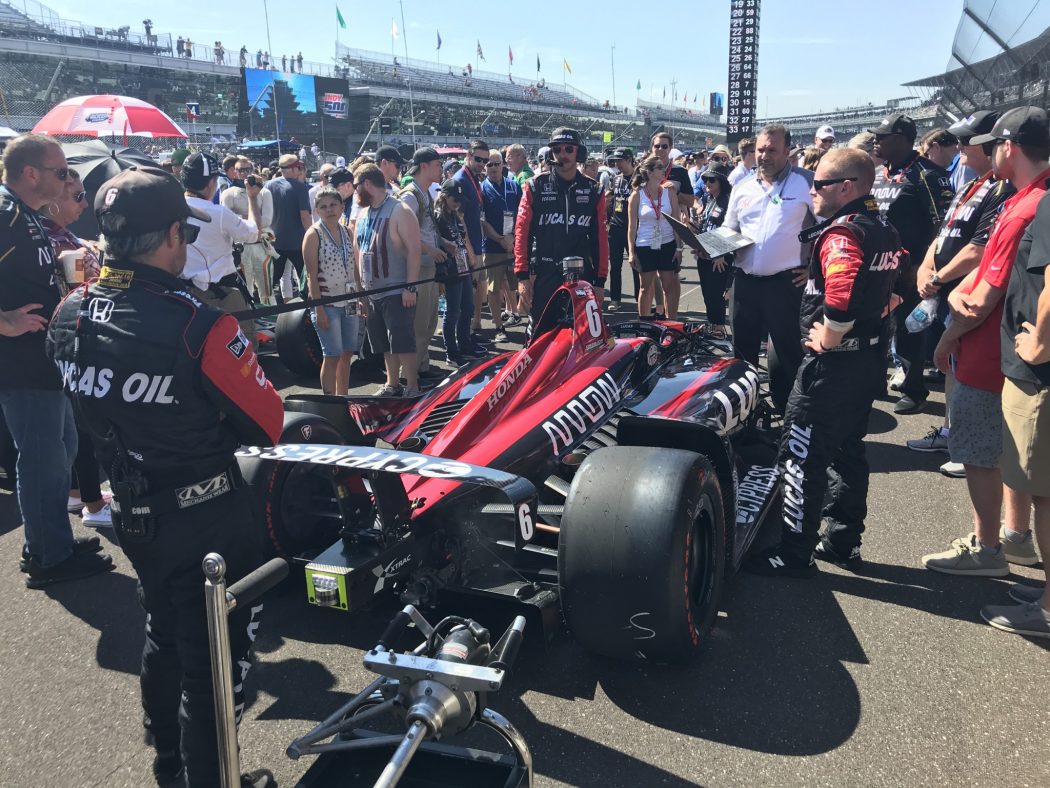 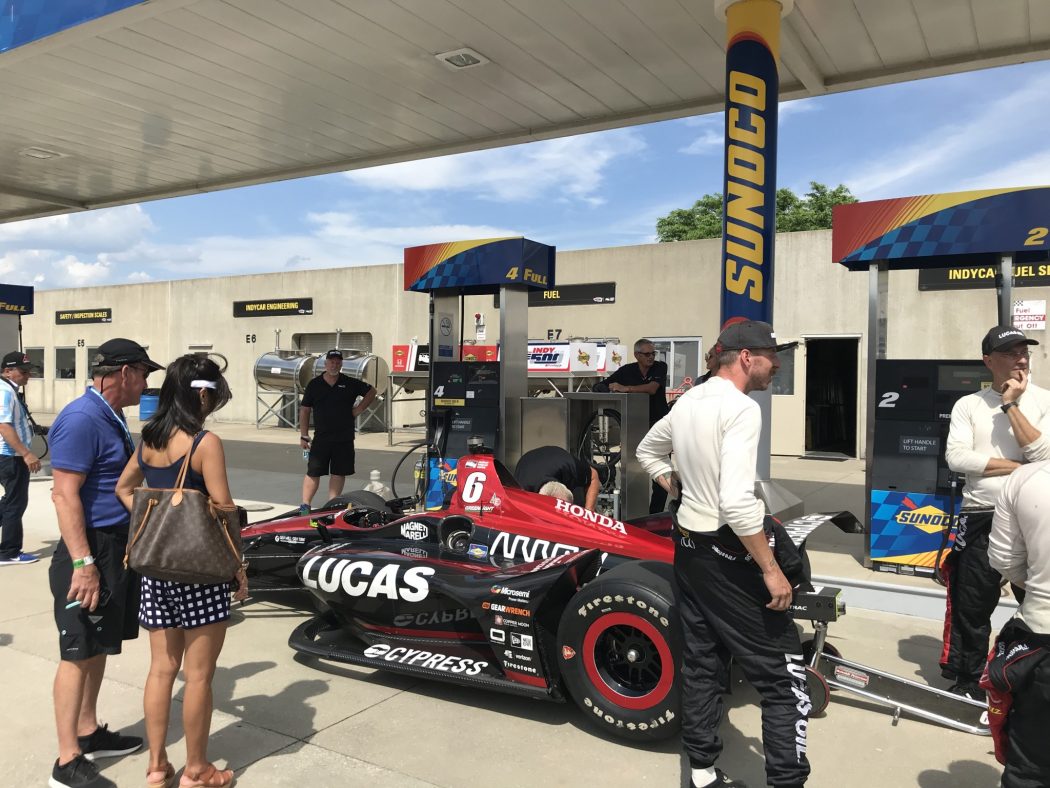 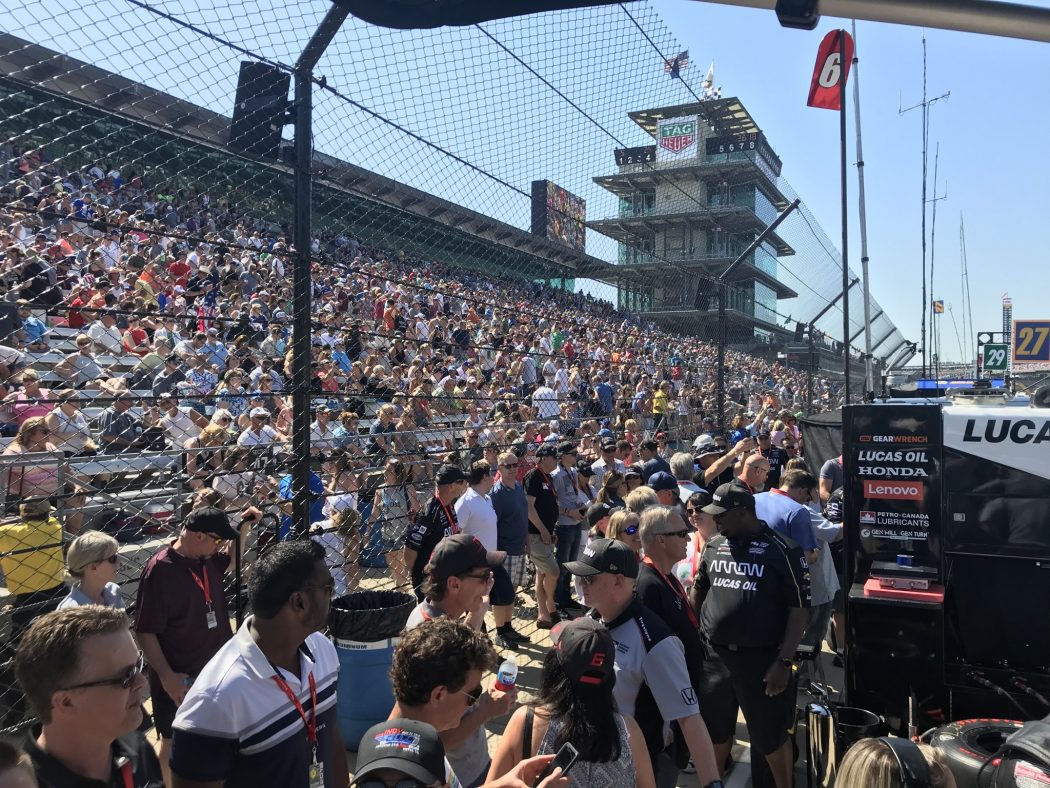 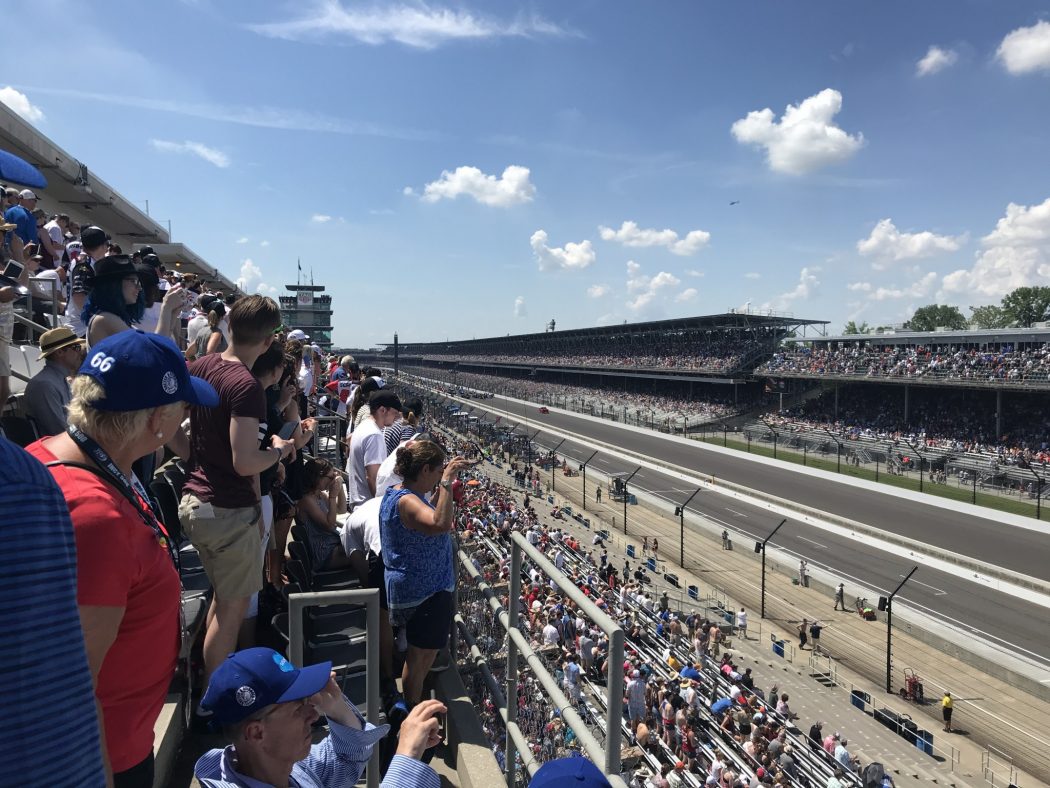 Spending the last few years working in around the world of motorsports has led me to a number of special events, none more so than earlier this year, when through a watch client of mine Omologato invited me to the Indy 500 to explore ways in which to build and enhance brand exposure across the United States following the establishment of a partnership with the Schmidt Peterson Motorsport team. Having long admired the event and the entire IndyCar championship, deciding to take up the invitation took a lot less time than the 40 seconds it takes for leading teams to lap the 2.5-mile oval.

We arrived into Indianapolis late on Thursday evening in the week preceding the race, with our team activities set to get underway early Friday morning with a welcome breakfast and a tour of the circuit. Heading to any race circuit for the first time is always something that fills me with a level of trepidation, no knowing where to park, pick up accreditation passes (on the occasions I’m fortunate to have a pass for an event), or how to actually get into the venue. Petty as it may sound, getting these simple tasks wrong can put a real dent into my perception of a race weekend. Thankfully, the opening moments of our Indy 500 journey got off to a pain-free start with parking less than 500 metres from the main entrance to the circuit costing $20 a day, accreditation passes picked up within 10 minutes and free circuit wide stable Wi-Fi removing the pain of roaming charges for those rushed calls to meet colleagues. Having long suffered the pains of access and movement around European racing circuits, it was this uncomplicated, dare I say it, friendly approach to the event that got me thinking Liberty Media could do a lot worse than sending a team to Indy to see how a motorsport event should be run.

Formula 1 is at a crossroads, or more appropriately the pedestrian crossing just before the crossroads. For the past 18 months, the motoring media have long discussed Formula 1’s need to decide what the future of the sport should look like. Should Formula 1 be entertainment? Does it need to represent the pinnacle of motorsport? Does it need to be relevant to the automotive industry, how can it better engage with an evolving audience, and how can it appeal to new sponsors? As of now, the future vision for Formula 1 isn’t all that clear. With the championship under American ownership, is it time to look to the USA for the answers?

The Friday of a Grand Prix weekend over the past few years has become a rather sterile affair, with two 90-minute sessions of free running, where owing to current power unit usage restrictions teams increasingly look to minimise the time cars spend on track, and qualifying sessions for support races, excitement is fairly minimal. By comparison, the Friday ahead of the Indy 500 is a pure party. Teams have a single test session of 60 minutes, with qualifying having taken place the previous week, this will be the last time cars and drivers sample the track before the race. The session is frantic and full of drivers looking for that final gain in performance. Following the session, the mood switches to that of a party, dance music is piped across the circuit PA system as teams prepare for the pitstop challenge.

The IndyCar pitstop challenge is the first element of a race weekend I believe Formula 1 would benefit from taking a “steal with pride” approach towards. Taking place on the pitlane, teams compete against each other in a what is essentially a ¼ mile drag run punctuated by a pitstop in which all four tyres are changed. Each driver and team competes in the event, with the winning pit crew receiving a cash prize. Formula 1 could implement this kind of event immediately. With the “race” taking place on the start/finish straight on the Friday of each GP weekend.

The party atmosphere which started with the pitstop challenge carried all the way through the weekend (despite there being no track action on Saturday) and through the race, with a variety of concerts taking place, including a dance festival with DJ sets during the race itself.

The appetite for Formula 1 in the America is genuine and remains a huge growth opportunity.

Race day drew a sell-out crowd in excess of 400,000. You might expect that the sheer volume of people would make moving around the circuit difficult and time consuming, but on this again the speedway surpassed expectations. Yes, the crowds were significant, but at no time did it feel like the circuit could not cope. The circuit, the staffing, and the event itself is geared up to cater for a large number of people out to enjoy the race weekend.

In talking to fans, team members and circuit management over the race weekend, one surprising theme to emerge was a genuine interest and following of Formula 1. On race day itself, ahead of being invited to the grid walk, a highlight of my life let alone the race weekend. We watched the first half of the Monaco Grand Prix from the Arrow Electronics hospitality unit, of the 400 guests more than half stopped to watch parts of the race and were happy to discuss in detail the race and more broadly the state of Formula 1. To me, more than ever it was clear the appetite for Formula 1 in the America is genuine and remains a huge growth opportunity.

Historically, Formula 1’s premium positioning has limited the championship’s willingness to consider alternative approaches to a racing weekend. Recent changes in race start times and pre-race procedures suggest Liberty Media may be a little more flexible to the way in which they go racing and to be frank maximise the profitability of the Formula 1 product. As Formula 1 seeks to build a greater footprint in North America, rather than looking to create new events in Miami, should the sport look towards a return to Indianapolis? The calendar clash between the Indy 500 and the Monaco GP is something no amount of negotiation can overcome, but how about switching the running of the Indy GP, a round of the IndyCar championship currently taking place two weeks before the Indy 500, to two weeks after it, and running the GP as a twinned event with Formula 1? The Formula 1 calendar currently takes the championship to Canada after Monaco, adding a round alongside the IndyCar Indy GP, so creating a double header with the Canadian GP would make a lot of sense logistically.  Combining the enthusiasm fans bring to the Indianapolis Motor Speedway with the Formula 1 product could drive a new renewed passion and interest in Formula 1. Either way, to any marketing and sponsorship heads operating in the sphere of motorsport, I highly recommend skipping the Monaco yachts for a year and experiencing open wheel racing the American way!

Finally, to reflect on the success of our visit to the Indy 500, I turn to the famous adage I’ve been unable to source and suggest a minor update. After a weekend in which every second of our Indy 500 experience was captured on the Omologato social media feeds including Instagram Live, Twitter and LinkedIn, Monday saw the brand surpass all previous sales records with the vast majority of sales coming from the US.