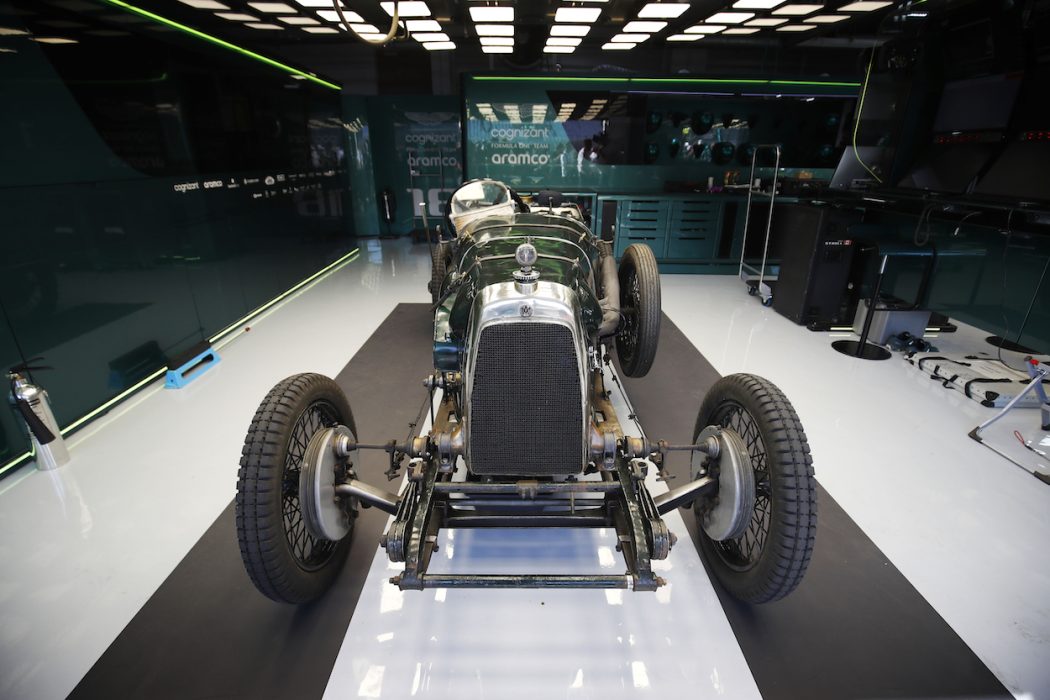 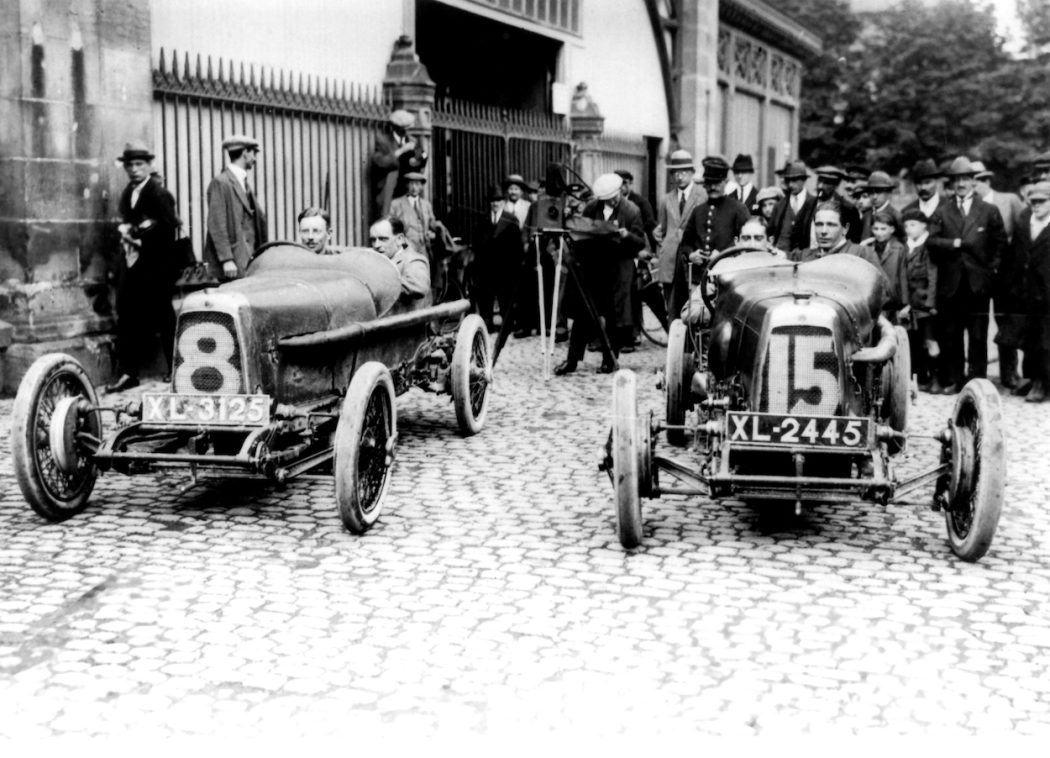 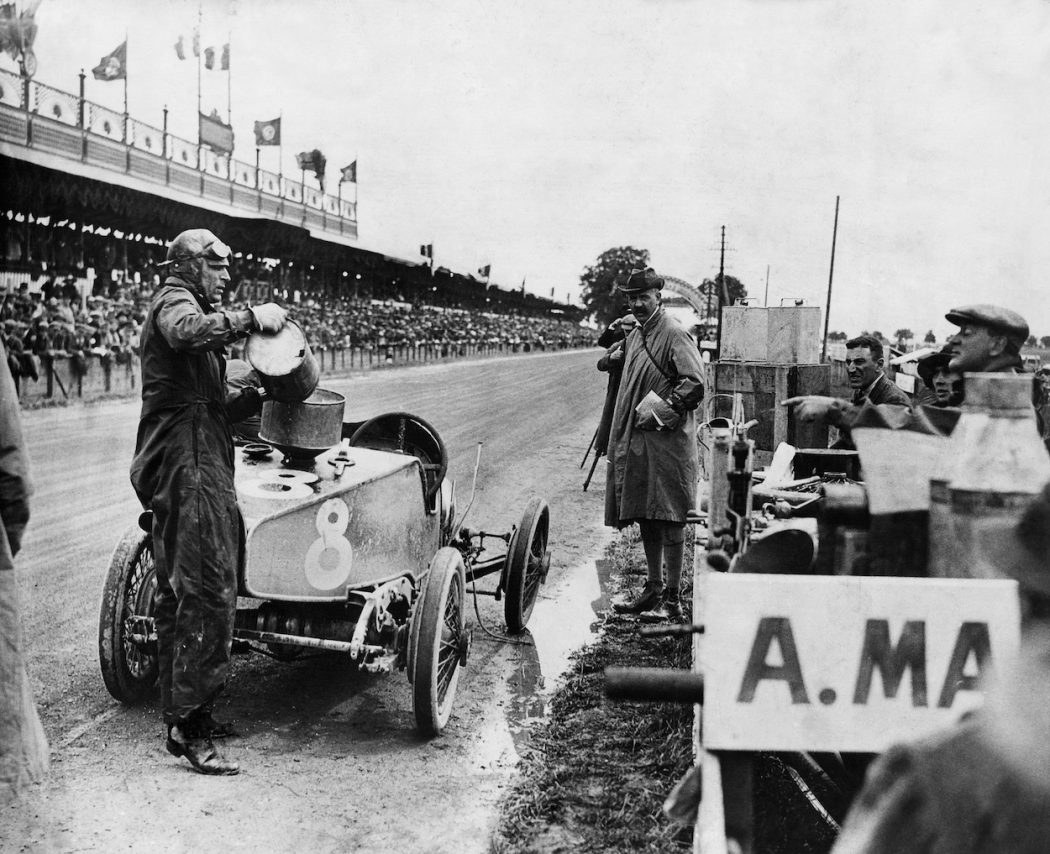 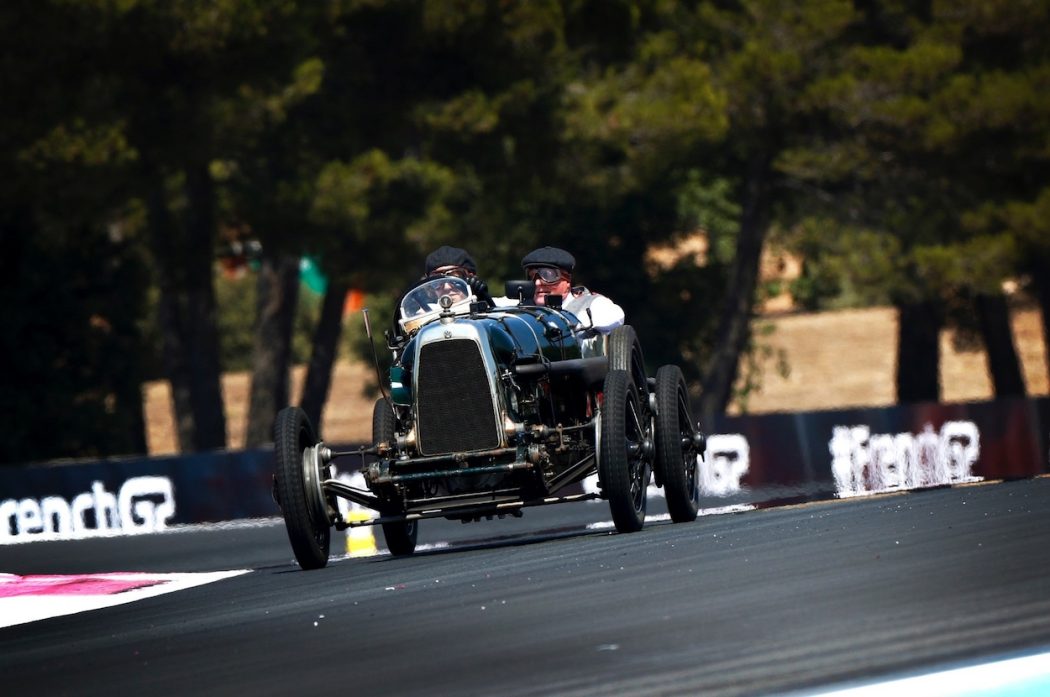 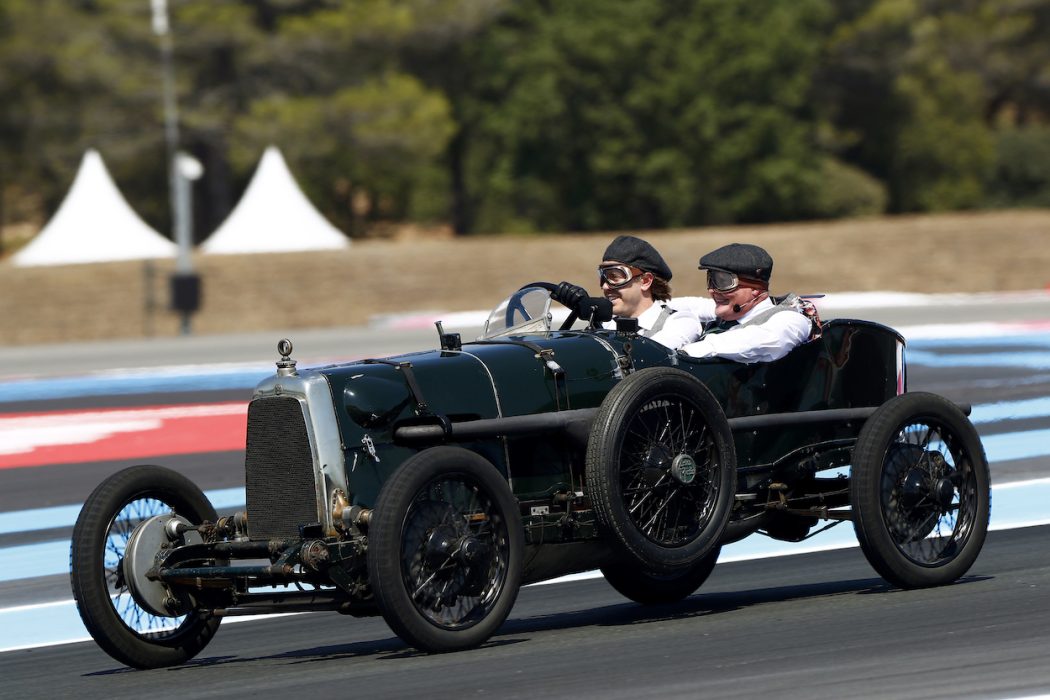 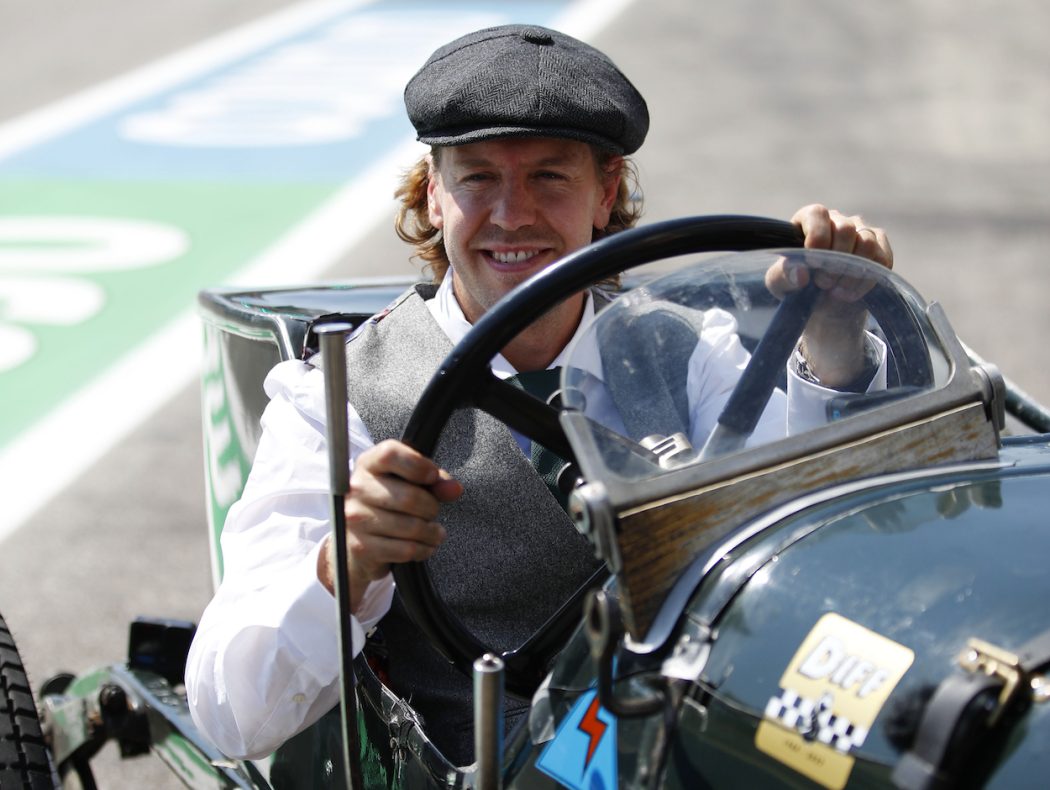 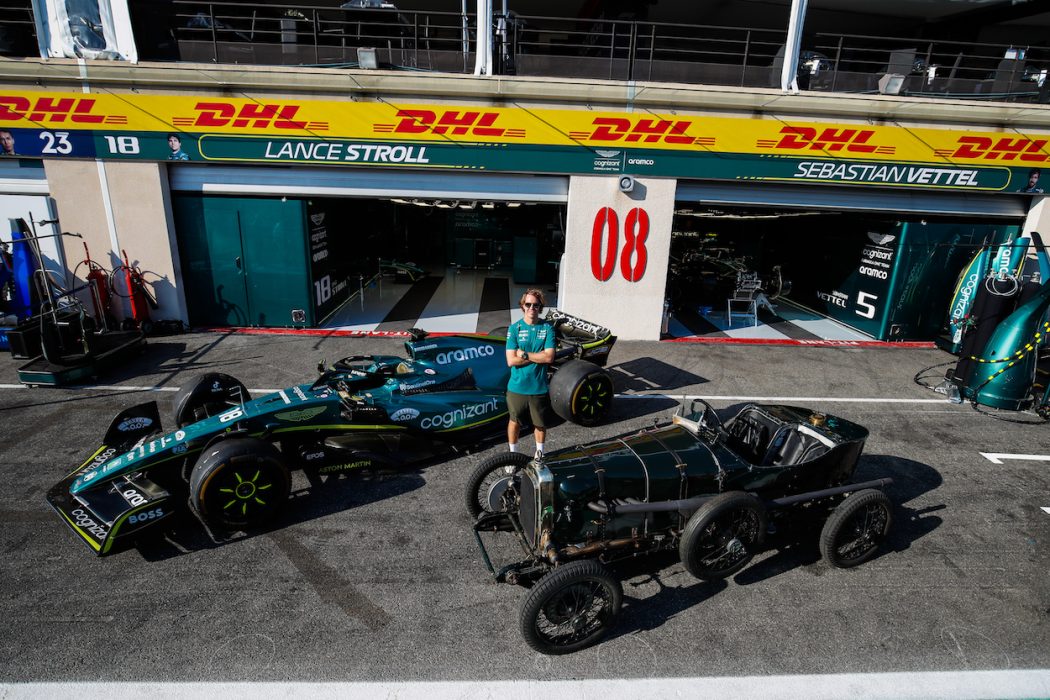 TT1 – nicknamed ‘Green Pea’ – returns to France with Sebastian Vettel, to celebrate the 100th anniversary of its racing debut in 1922. Aston Martin Aramco Cognizant Formula One Team to race with original Aston Martin button badge on its cars, in the week the brand reveals its updated new iconic wings marque.

A century on from its racing debut, Aston Martin’s original Grand Prix car today roared back to the French Grand Prix for a thrilling celebratory lap.

This weekend’s race sees Aston Martin mark the centenary of its maiden challenge at the 1922 French Grand Prix, with no current Formula One manufacturer enjoying such a past history of the top-flight competition.

Ahead of Sunday’s Grand Prix, four-time F1 world champion Sebastian Vettel had the chance to pilot TT1 – affectionately nicknamed ‘Green Pea’ – around Circuit Paul Ricard, 100 years on from the storied car taking to the road circuit of Strasbourg for a 60-lap, 800 km race as one of two Aston Martin entries.

Founder Lionel Martin built the cars following a commission by a wealthy young motor racing driver and pioneer Count Louis Zborowski, who invested £10,000 in their construction and the development of an entirely new 16-valve twin overhead cam four-cylinder race engine. TT1 and TT2 were originally intended for the 1922 Isle of Man TT (Tourist Trophy) event, but a delay saw them instead make the marque’s international racing debut at the French Grand Prix on the 15 July 1922, with Zborowski piloting TT1. He later designed ‘Chitty Bang Bang’ the car which inspired the book, film, and stage musical Chitty-Chitty-Bang-Bang.

Sebastian Vettel, Aston Martin Aramco Cognizant Formula One Team driver said: “It was an incredible honour to drive this car, exactly 100 years on from its last taking to the starting line at the French Grand Prix.

“Green Pea holds a very special place in Aston Martin’s heritage, and you can almost feel that century of history beneath your fingertips when at the wheel.

“The racing spirit and will to win is something that defines Aston Martin, and it’s fantastic to celebrate it this weekend as we bring Green Pea and our heritage in motorsport together with the innovative technology and performance of today’s AMR22 car.”

This weekend, the Aston Martin Aramco Cognizant Formula One Team will race with the original Aston Martin logo from 1913 on the nose of its cars, mirroring the marque featured on Green Pea. The symbolic switch comes in the week that Aston Martin launches a bold new creative identity, including a contemporary update to its iconic wings logo, created by the manufacturer’s world-renowned design function in collaboration with acclaimed British art director and graphic designer Peter Saville. The new Aston Martin wings feature on the monocoque sides of the AMR22 car.

The first Aston Martin Grand Prix car, featuring a 1,486cc engine unit, was good for around 55bhp at 4,200 rpm. The car – built with a body conforming to the voiturette style – weighed in at 750kg, 45kg lighter than today’s AMR22 challenger. It had a top speed of 85mph and carried two seats, one off-set, as per the Grand Prix regulations of the time, to accommodate the riding mechanic who was an essential member of the team not least because of his job to pressurise the fuel tank via a hand pump.

The experience was sufficiently exhilarating for the fledgling team, based at Abingdon Road, Kensington, to continue their Grand Prix adventure and blaze a trail for Aston Martin’s future success in international motor racing.

Lawrence Stroll, Executive Chairman and owner of the Aston Martin Aramco Cognizant Formula One Team, said: “Aston Martin benefits from the earliest Grand Prix history of any manufacturer currently racing in F1, and we are proud to celebrate that this weekend, 100 years on from making our debut at the French Grand Prix.

“Having been born on a racetrack, performance DNA runs through Aston Martin’s bloodline and is something we are re-injecting to the Aston Martin brand through our return to Grand Prix racing with the Aston Martin Aramco Cognizant Formula One Team. We continue to climb together, following in the footsteps of those who led the way. I believe we can all look forward to many more seasons of intense competition in what is, today, nothing short of a global sporting phenomenon.”