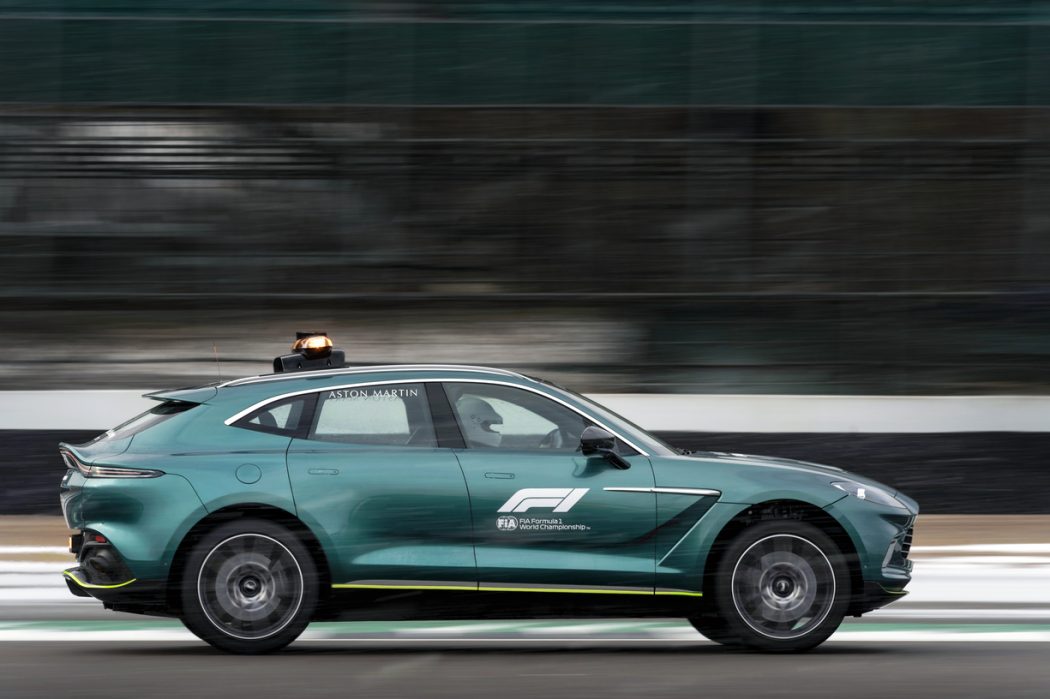 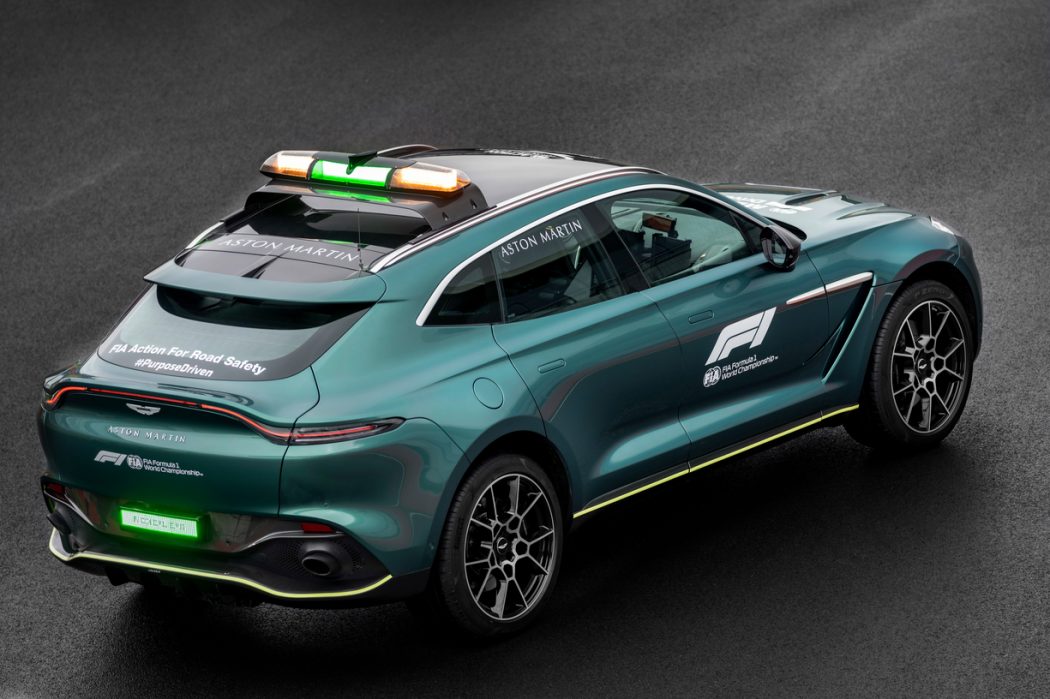 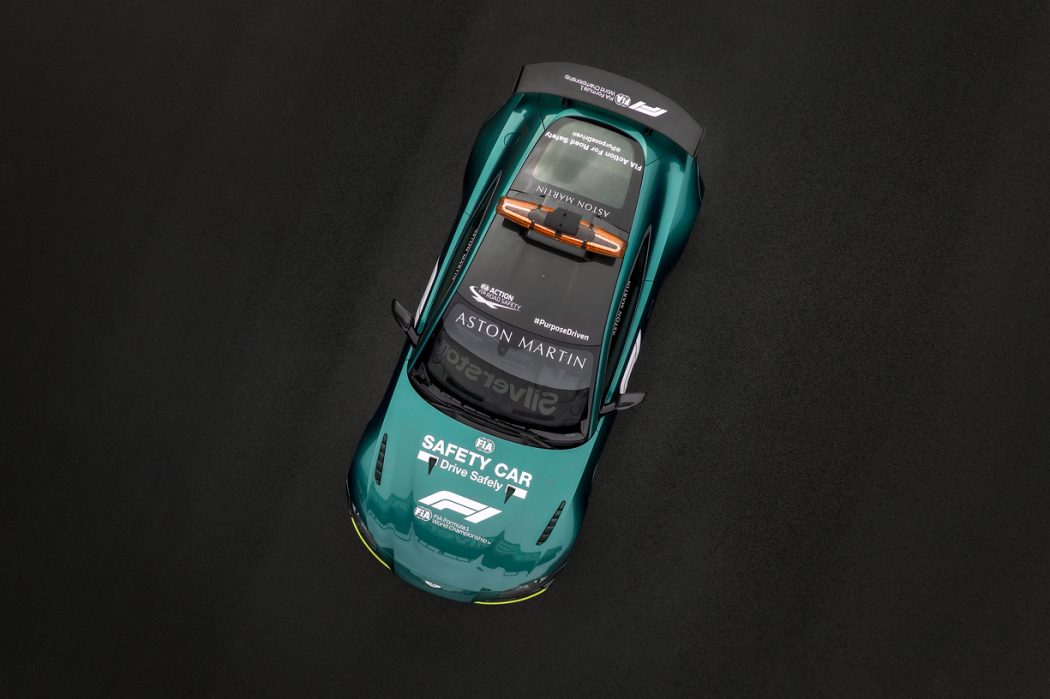 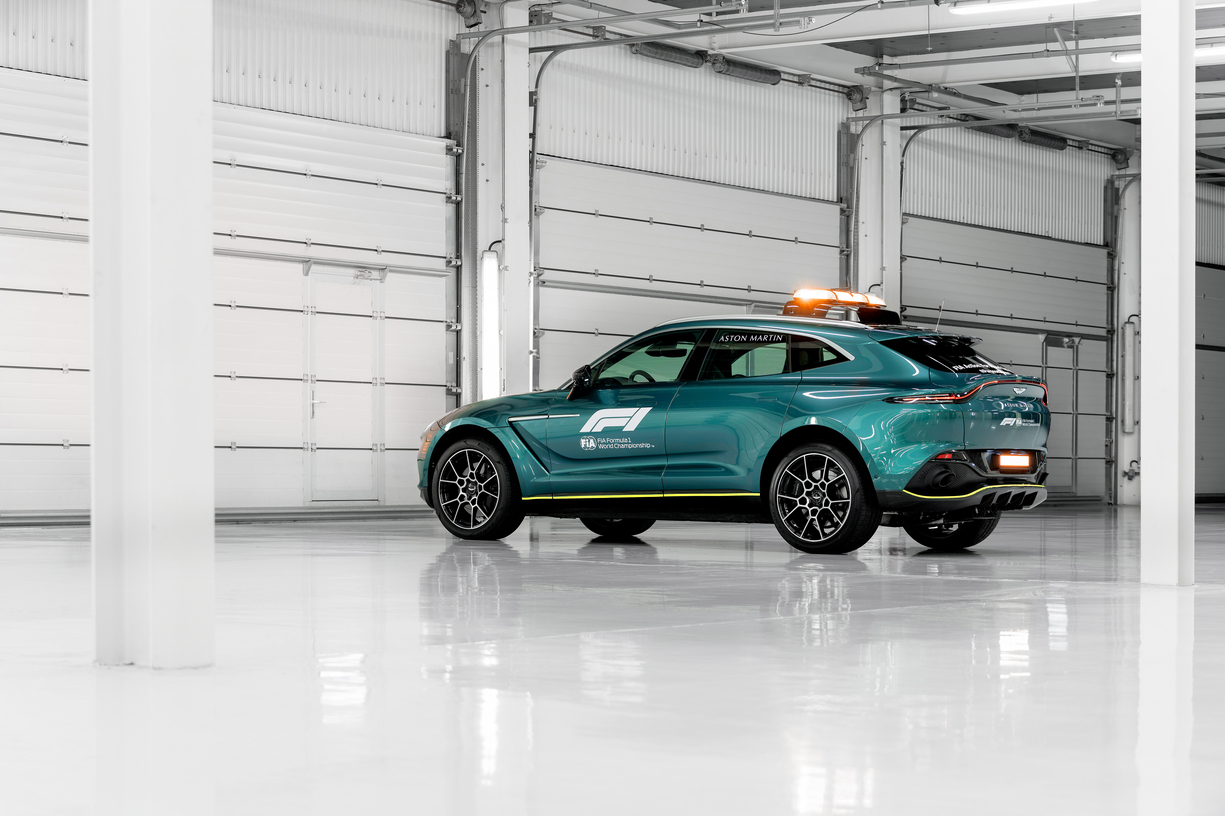 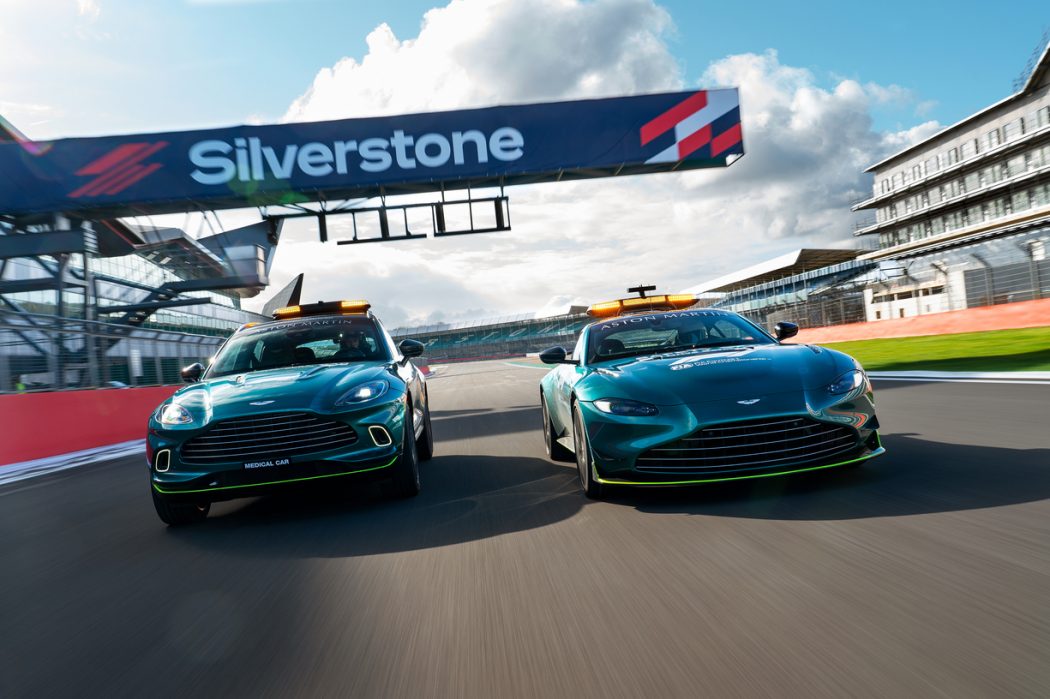 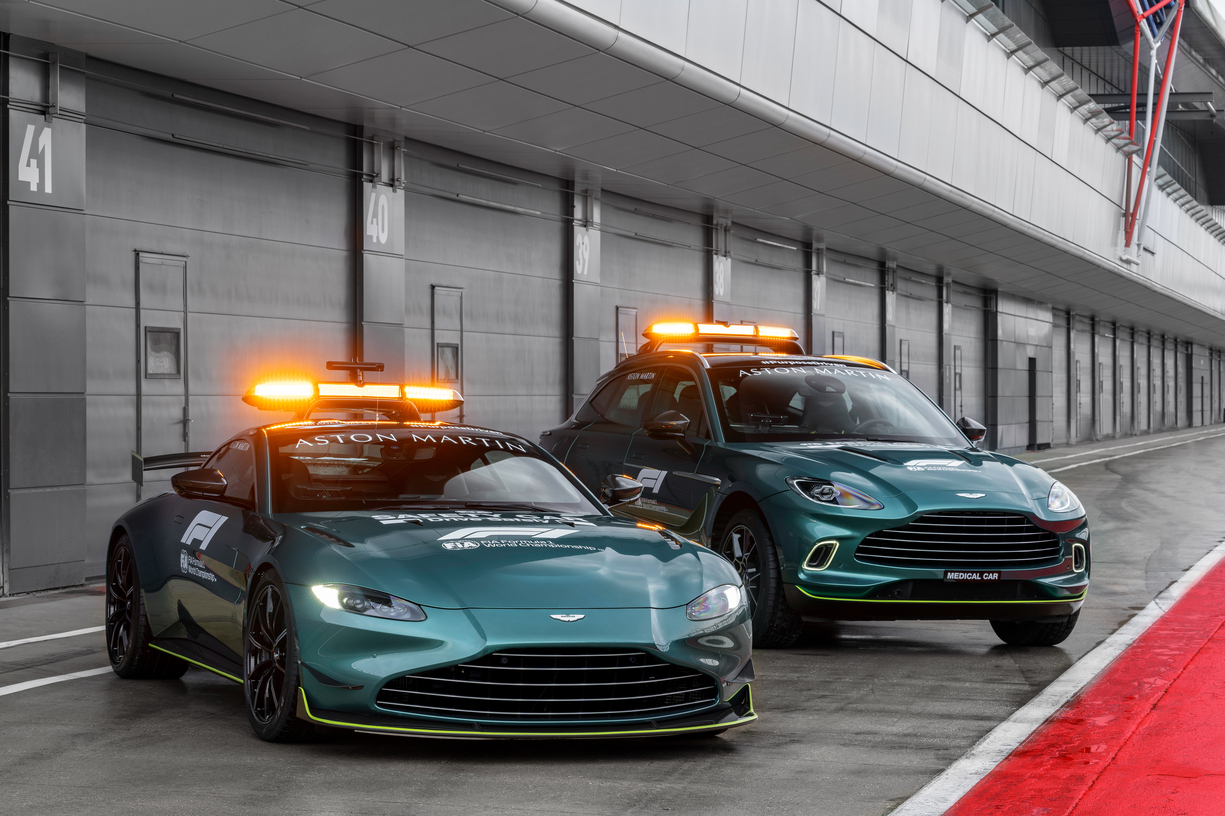 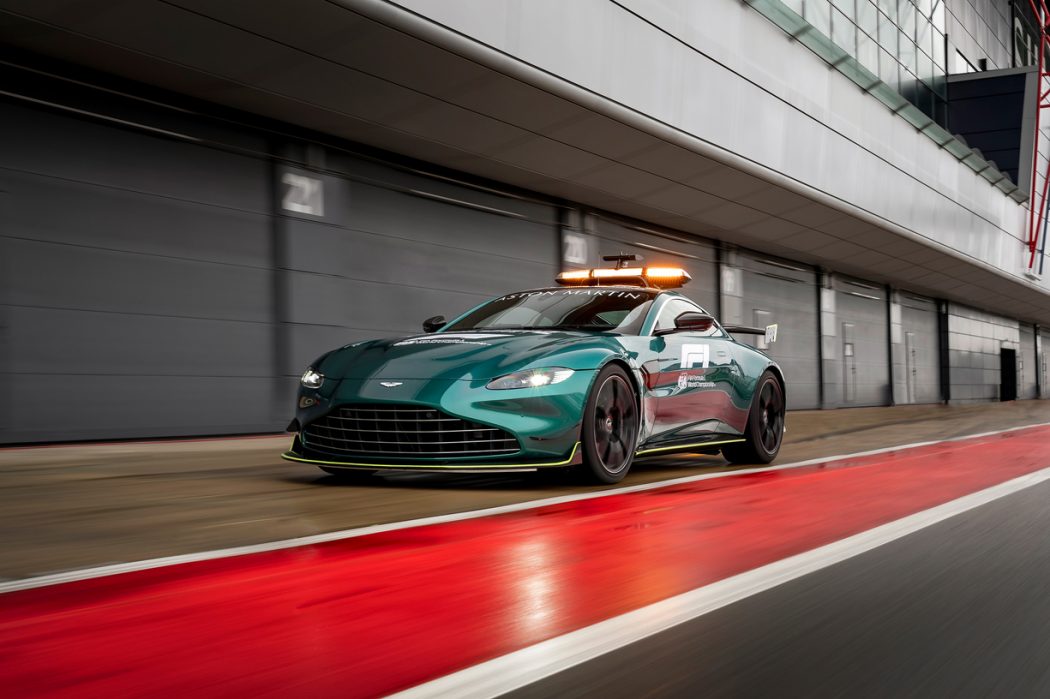 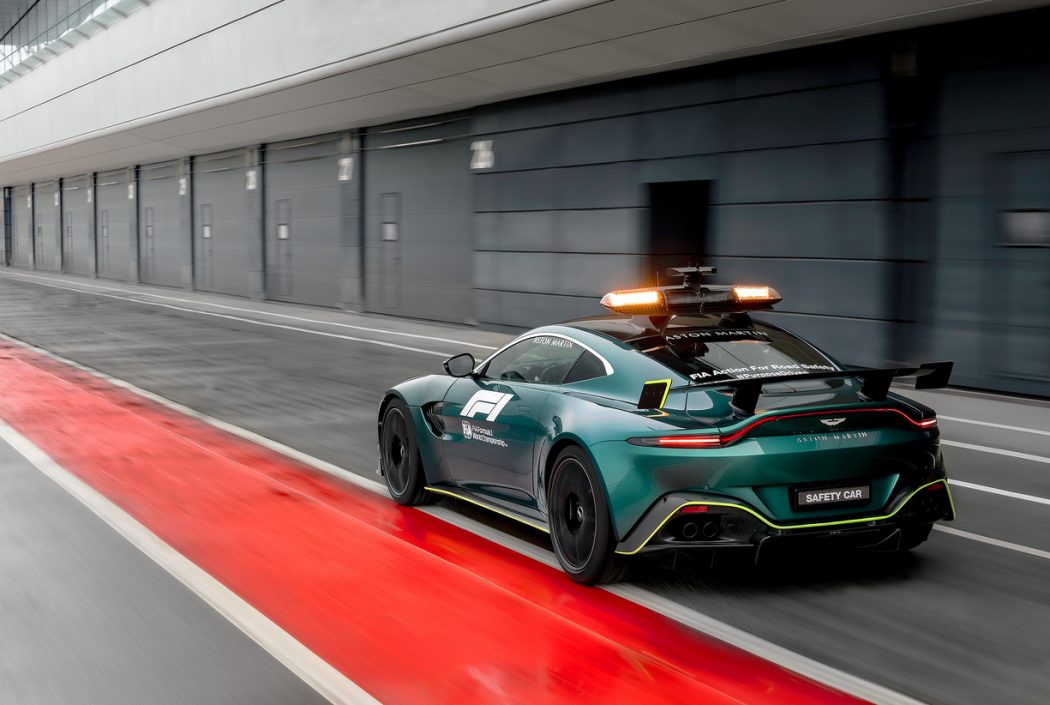 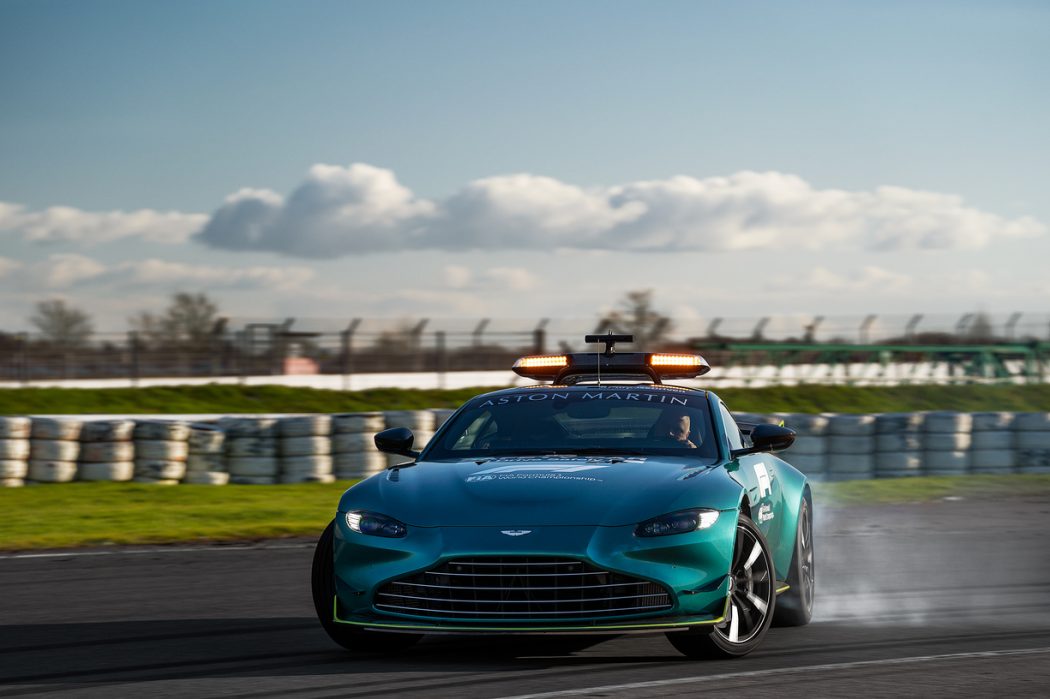 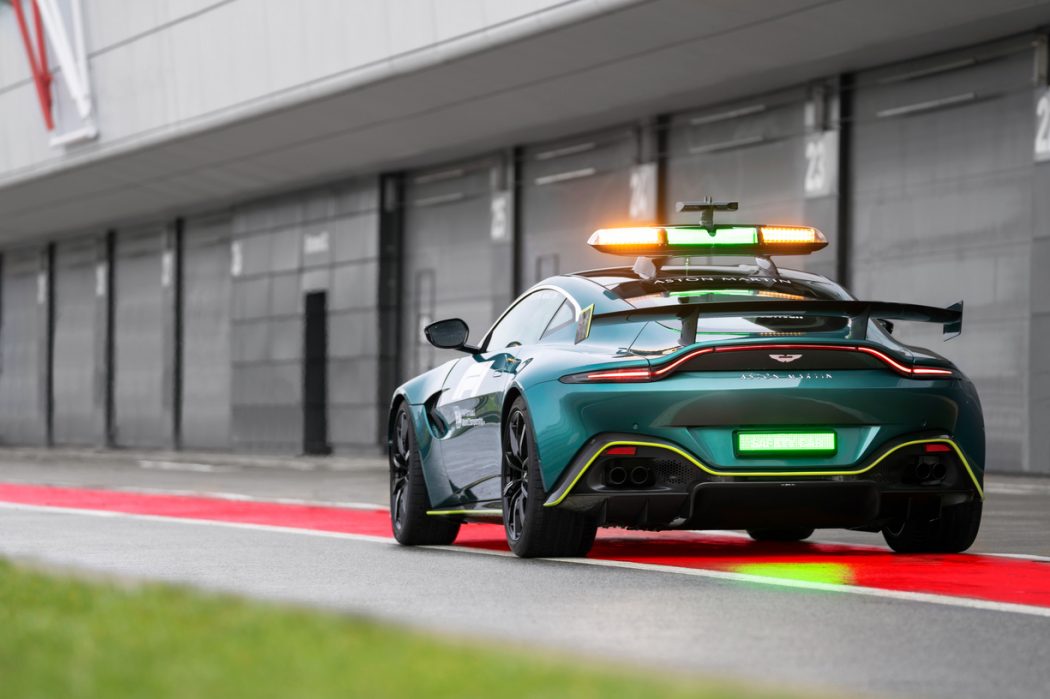 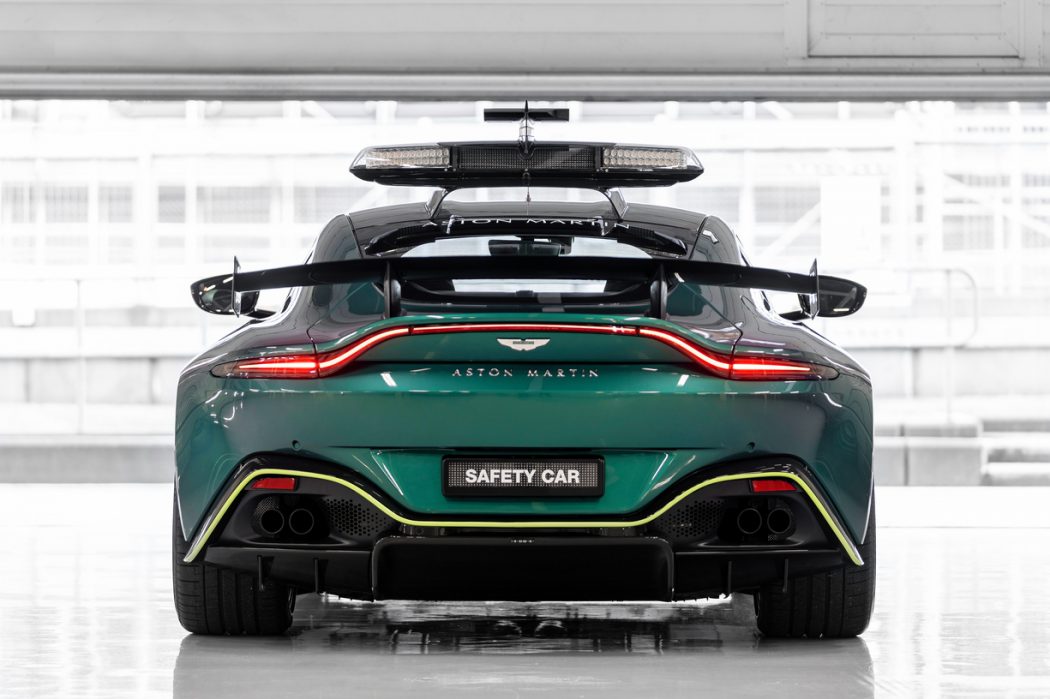 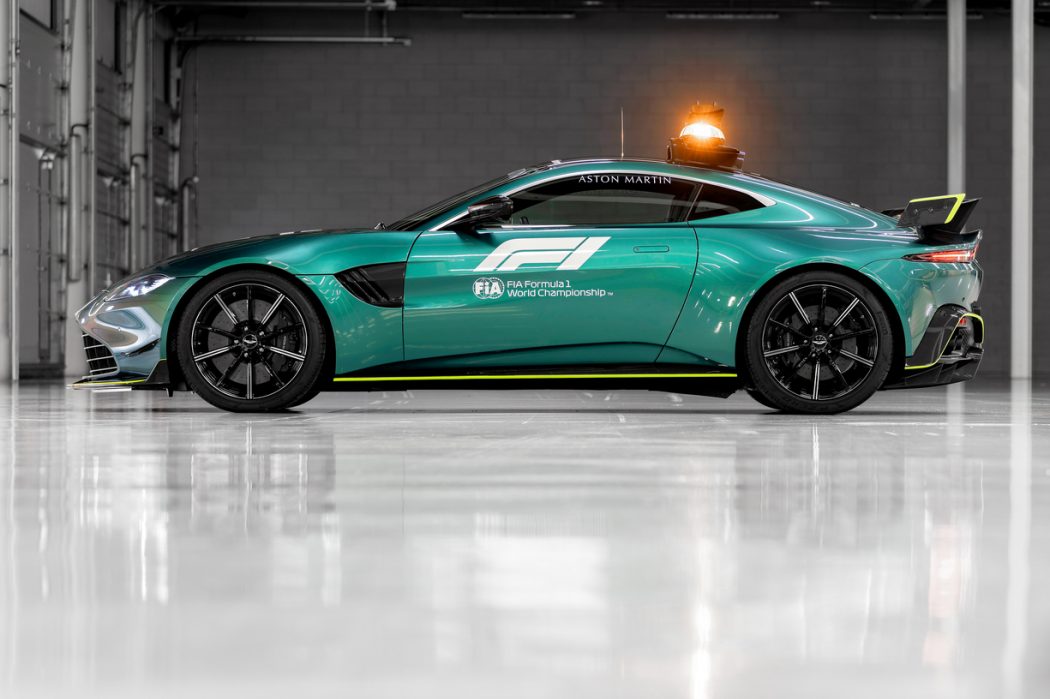 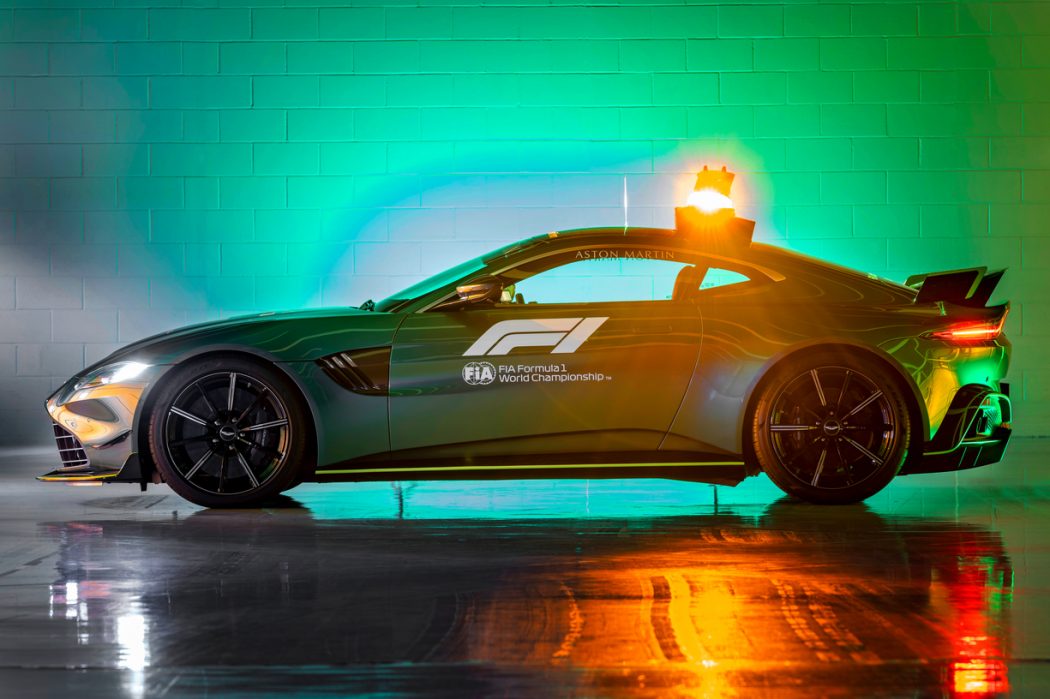 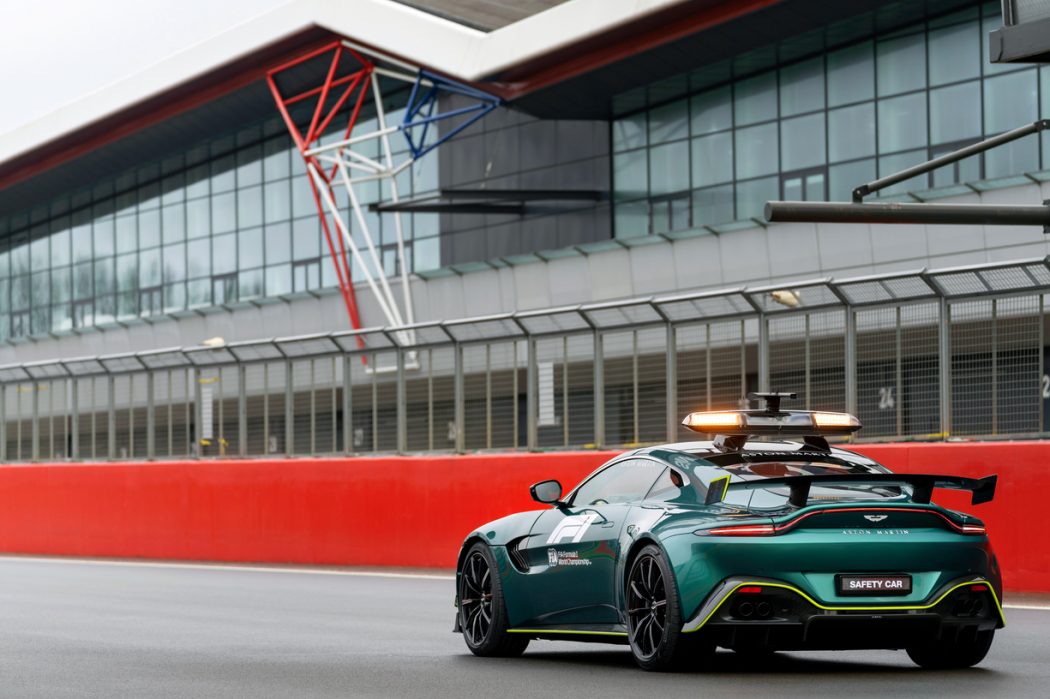 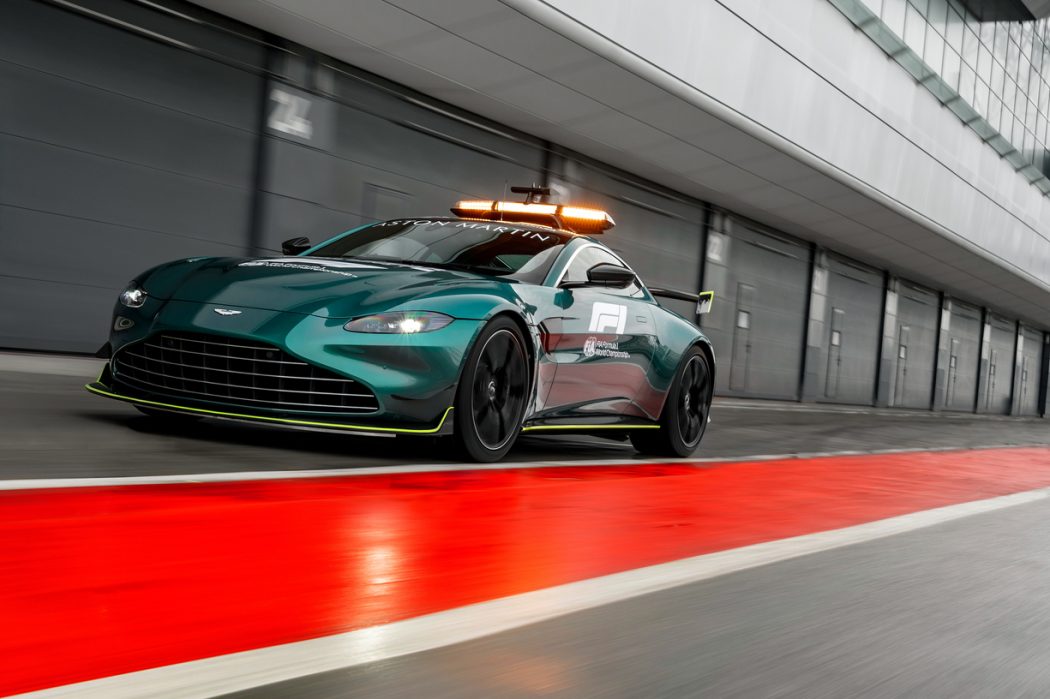 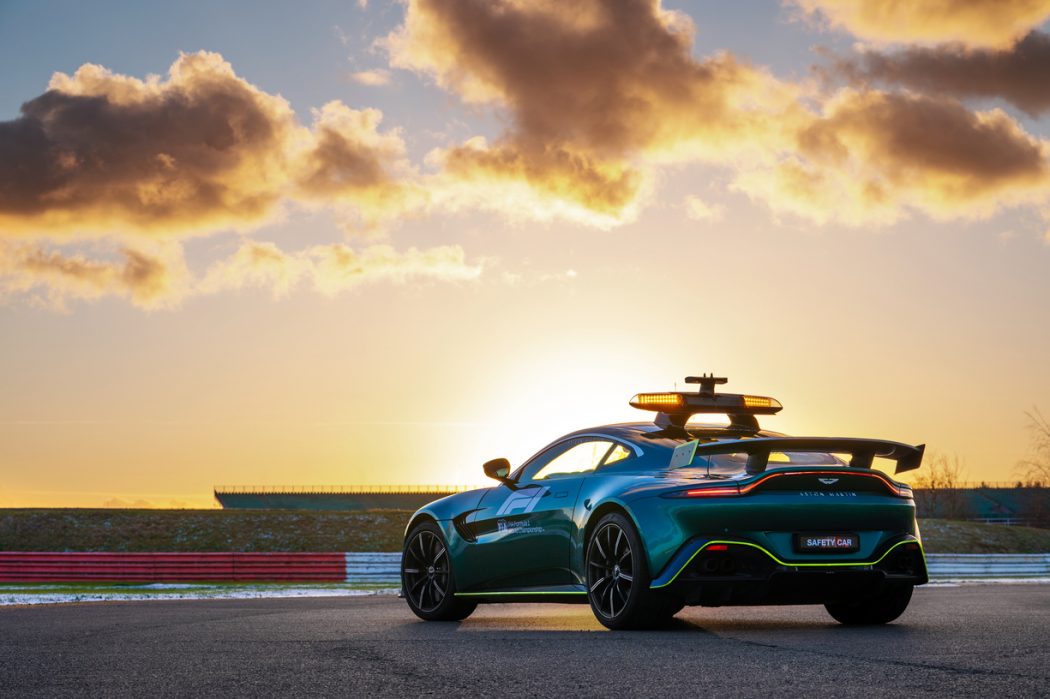 When Aston Martin makes its return to the FIA Formula One World Championship at the end of this month, it will be with more than two Grand Prix contenders on the Formula 1 Gulf Air Bahrain Grand Prix 2021 grid: For the first time in the history of the sport, the Official Safety and Medical cars of Formula 1 will also bear the famous wings of the British luxury brand.

A specially equipped version of the Aston Martin Vantage has been developed for the critical role of intervening and controlling the pace of an event involving the fastest racing cars in the world. Engineered by an experienced team at Aston Martin’s Headquarters in Gaydon, the car benefits from significant chassis and aerodynamic improvements. With only a few additional modifications to make it FIA compliant, the new safety car is the pinnacle of Vantage performance.

Aston Martin DBX, the brand’s critically acclaimed first SUV, will also take on the role of an Official Medical Car of Formula 1, showcasing its own power and handling prowess as it launches into action to support in the event of an emergency.

Piloted by FIA’s appointed driver, Bernd Mayländer (DE) who has been at the helm of the F1 safety car for over twenty years, the Aston Martin will remain on standby in the pit lane throughout the race.

When deployed by Race Control in the event of bad weather or an accident, the former race driver and co-driver, Richard Darker (UK) will take to the track at the head of the field to safely control the pace of the pack, neutralizing the event and allowing any incident to be managed safely by the circuit’s officials.

F1® tyre temperatures can drop when the cars are running at sub-optimal speeds, therefore fast lap times are essential for the Official Safety Car of Formula 1. This responsibility led the Aston Martin Lagonda CEO, Tobias Moers to task the engineering team with enhancing the already sporting Vantage, focusing on improved track performance and lap times.

The results? Power has increased by 25PS to 535PS, delivered by a 4.0-litre twin-turbo V8 delivering significant performance capability going from 0-60mph in just 3.5 seconds. 685Nm of peak torque remains the same but is now sustained for longer, and with additional work on the transmission means the driver has a better sense of directness, precision, and control through upshifts and downshifts. The Vaned grille coupled with a new front splitter creates 155.6kg of downforce at 200km/h; more than 60kg than the production Vantage produces at the same speed. Modifications to the suspension, steering and dampers have also been undertaken, with further detailed underbody bracing modifications to increase front structural stiffness. All this, together with a comprehensive aero kit and a switch to lower-profile tyres, the Aston Martin Vantage Official F1 Safety Car has all the credentials to handle a Formula 1 circuit.

Aston Martin is known worldwide for its high-profile successes in sports car racing, most recently last year’s multi-class victory at the 24 Hours of Le Mans that contributed to becoming FIA GT World Endurance Manufacturers’ Champions. Engineering developments derived from these successes have aided the systems that feature in the F1 safety car. The unique requirements of the safety car mean the vehicle must be capable of going from top speeds, back to idling in the pit lane without so much as a cool-down lap, so a reliable and robust thermal management system is a key element to its performance. Having already developed a cooling system that proved effective in extreme conditions and temperatures on the multiple championship-winning Vantage GT4 race car, Aston Martin transferred this technology into the safety car, along with the addition of extra vents in the bonnet to support further cooling.

As it performs on standard Pirelli road tyres, the safety car is also equipped with the same carbon-ceramic brakes found on the production Vantage, with additional brake ducts hidden within the front grille to aid cooling.

The light-bar sits on a carbon fibre plinth, raised above the roofline. The aerodynamic profile is designed to offer the least possible resistance while providing an optimised flow of air towards the exaggerated rear wing. Bright orange lights on the outer edges of the light-bar illuminate when the Official Safety Car of Formula 1 joins the track. A centrally positioned amber flashing light then illuminates once the safety car is in position ahead of the race leader – indicating that no one should overtake; two centrally positioned green lights are illuminated once it is safe for the F1 cars to pass. The headlamps and taillamps also flash to aid the safe deployment of the car. The rear number plate displays ‘Safety Car’ illuminated by LED’s, making it clear to see from vehicles behind in all weather conditions. A rear-facing camera is also fixed to the light-bar that feeds a live image into a second rear-view mirror located inside the cabin, allowing the co-driver to monitor any activity at the rear.

Further, inside the cabin, the production seats have been replaced by FIA-approved racing seats equipped with a 6-point safety harness, the same as those found in the F1® team cars. Two screens are mounted on the dashboard, providing the driver and co-driver with a live television feed and a variety of customizable information displays, including live lap timing and the track positioning of all active race cars. The centre console has been modified significantly. The rotary dial has been moved back to where the cup holder was positioned, and in its place sits a switch control system used to execute a number of actions, including activating the siren, radio communications and controlling the light-bar LED. The ‘Marshalling System’ is integrated into the instrument cluster and the dashboard, allowing both the driver and co-driver to see which colour flag is being shown on the track, by the illumination of the same coloured LED light; mirroring the system that also features by regulation in all F1® team cars. TV cameras are also mounted on top of and inside the car, to provide live TV footage.

Formula 1 fans around the world are delighted to see the return of Aston Martin to the track, as am I. The Official Safety Car of F1 is a beautiful, capable car that signifies an exciting new era for Aston Martin.

Powered by the 4-litre, twin-turbo V8 engine, also found in DB11 and Vantage, DBX provides an impressive output of 550PS and 700NM of torque which launches DBX from 0 to 62mph in just 4.5 seconds, reaching a top speed of 181mph. All this ensures the FIA medical team can respond effectively to an emergency. With a sound that is unquestionably Aston Martin, the active exhaust system means DBX will not only be seen but heard, as it does.

The Official Medical Car of Formula 1 is required to carry a substantial amount of equipment including a large medical bag, a defibrillator, two fire extinguishers and a burn kit – and the DBX is more than equipped with 632 litres of boot space.

Whilst the interior trim is fully representative of a customer vehicle, the central rear seat has been removed, and the remaining four have been replaced with sport bucket seats, each equipped with a 6-point safety harness. These provide seating for the driver, Alan van der Merwe and Dr Ian Roberts – the FIA Formula 1 Medical Response Coordinator, as well as a Local Doctor, leaving one spare, in case an incident requires a racing driver to be driven back to the pit lane. Much like the safety car, two screens have been mounted onto the dashboard to provide live race footage. An additional screen is used to read live biometric data delivered via technology in the drivers’ gloves, which in the event of an accident, provides critical information on their condition. The ‘Marshalling System’ and the rear-view mirror camera display have also been installed into the medical car.

The development of both these Official Safety Car of Formula 1 and Official Medical Car of Formula 1 was carried out by the engineering team at Aston Martin. Both vehicles have endured significant testing, which included high-speed durability assessments and aggressive circuit driving at the Aston Martin facility at Silverstone, totting up almost 15,000km collectively. The vehicles have also been tested in a dyno climate chamber to ensure they will perform in all race conditions.

Tobias Moers, Chief Executive Officer of Aston Martin Lagonda said “Together with the whole company, I am extremely proud of the Aston Martin brands to return to Formula 1, the pinnacle of motorsport for the first time in more than 60 years and represents the start of a significant new era for Aston Martin. To see our acclaimed Vantage, our most dynamic sports car, performing the role of the Official Safety Car of Formula 1 and our first SUV, DBX, operate as the Medical Car on Formula 1 circuits around the world is a proud moment for us all”.

Aston Martin fans will be able to see the Aston Martin Vantage Official Safety Car of Formula 1 in action for the first time during the three-day pre-season test at Bahrain on 12-14 March, and then again during the opening round of the FIA Formula One World Championship, at the same venue two weeks later.