Back at the Spanish racetrack

I always enjoy talking with Joan Fontserè, General Director of the Circuit de Barcelona-Catalunya. This time we sit down for coffee with Joan during his second “full season” at the helm of the Spanish Formula 1 track.

In the beginning, you were aiming to demonstrate the potential of this circuit as an economic engine and increase the presence of the people at organised events. Did you reach that goal?

Well, it’s still too early to say whether we’re reaching it or not. This is my second complete season. I arrived here late 2015 and 2016 was already fully planned. Talking about 2017, the results were good, and 2018 will have us reaching for much more. Anyway, the sale numbers are a bit better than last year, even in terms of media attendance. So we can definitely say that we’re going in the right direction.

Formula 1 and MotoGP are the two primary events on the calendar of the Montmelò circuit. What other initiatives and events have you included for 2018 or planned for the future to keep the attention of the sponsors and to increase the presence of the public?

We have introduced some new events such as the World Rally Cross. In our calendar, we have more than 126 days of possible activity on the track per year. Therefore, we simply must find ways to introduce more events. Our “incentive days” are mainly focused on motorsport tourism: they don’t take place exclusively on the track, instead, the action is moved to the different areas of the circuit. I’m also thinking about non-motorsport events like music festivals or sports activities like running, biathlon, all to increase the attendance and the potential of the circuit.

The Italian market has great potential, that’s true, but unfortunately, nowadays Italy is not in the top five countries in terms of visitor numbers.

During the last Formula 1 tests, I saw and met many Italian people, especially Ferrari fans – the Scuderia Ferrari Club seem to be becoming more present here. Some of them have called the Grand Prix of Spain at Montmelò the most interesting race for them apart from to the Italian Grand Prix, for the costs and access to the circuit. What’s your take on that?

The Italian market has great potential, that’s true, but unfortunately, nowadays Italy is not in the top five countries in terms of visitor numbers. I have really been surprised when I arrived at the managing position here in Barcelona circuit, because I thought that many Italian people would come to see the Grand Prix because of Ferrari, because of the tradition of the sport and the interest in Barcelona as well as in all the cultural and architectural knowledge. I can say that we are trying very hard to find the right way to connect with the Italian groups of Formula 1 fans.

Another aspect that caught my attention during the Formula 1 tests was the presence in the paddock of students accompanied by their teachers. It’s nice to bring all these youngsters closer to the world of motorsport competition, which is, above all, an interesting model for economic and organisational exercise.

Yes, that’s absolutely right – we want to create a circuit community and build a strong future for them. There are many various links and connections between the students and our circuit, like entertainment, management, training, technology, languages, also the values in sports and the business of sports. Therefore, we’re always promoting those kinds of activities, and Formula 1 testing was one of the best platforms to reach this target audience. Thank you for the kind words!

Do you have a message, a special invitation that you want to send to the public from these pages of the Paddock magazine?

At the end of the day, you have to come to the circuit and experience it yourself – don’t let someone else explain it to you, patronise you and decide for you. And obviously, enjoy yourself. 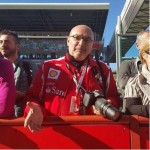