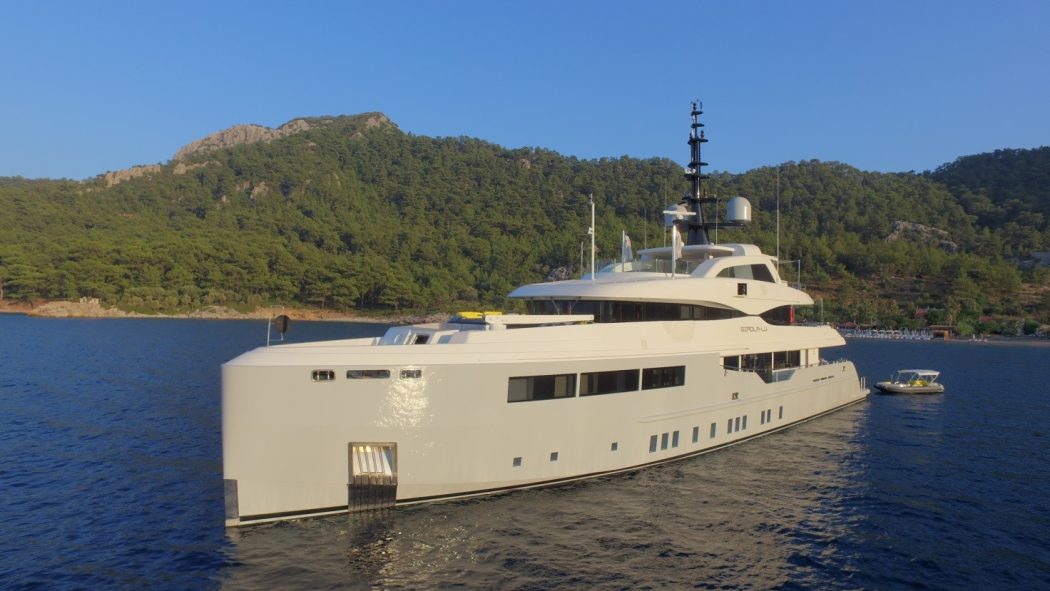 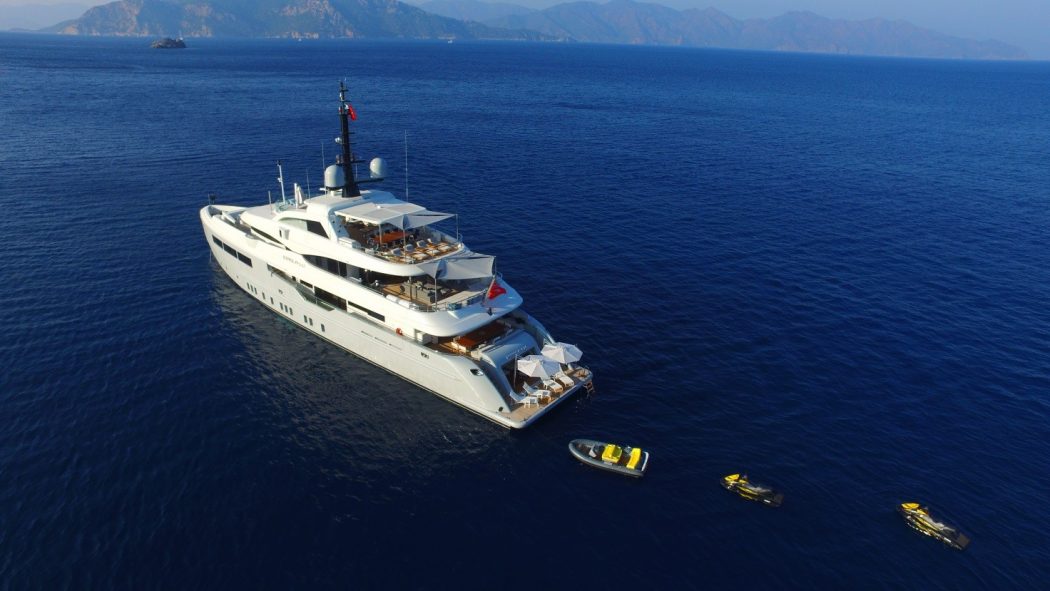 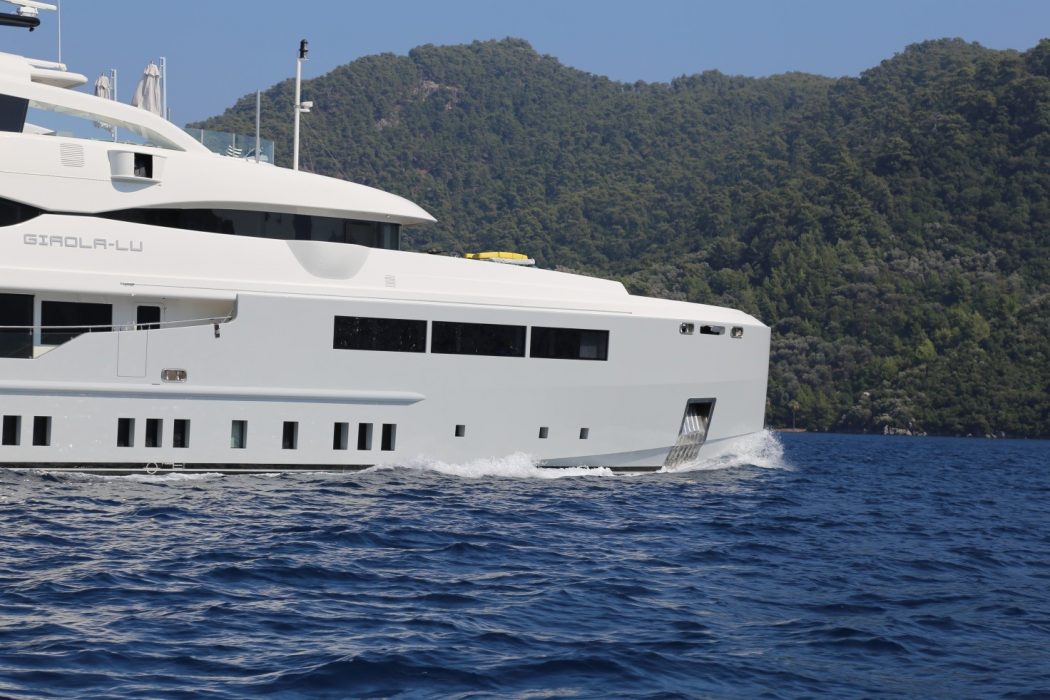 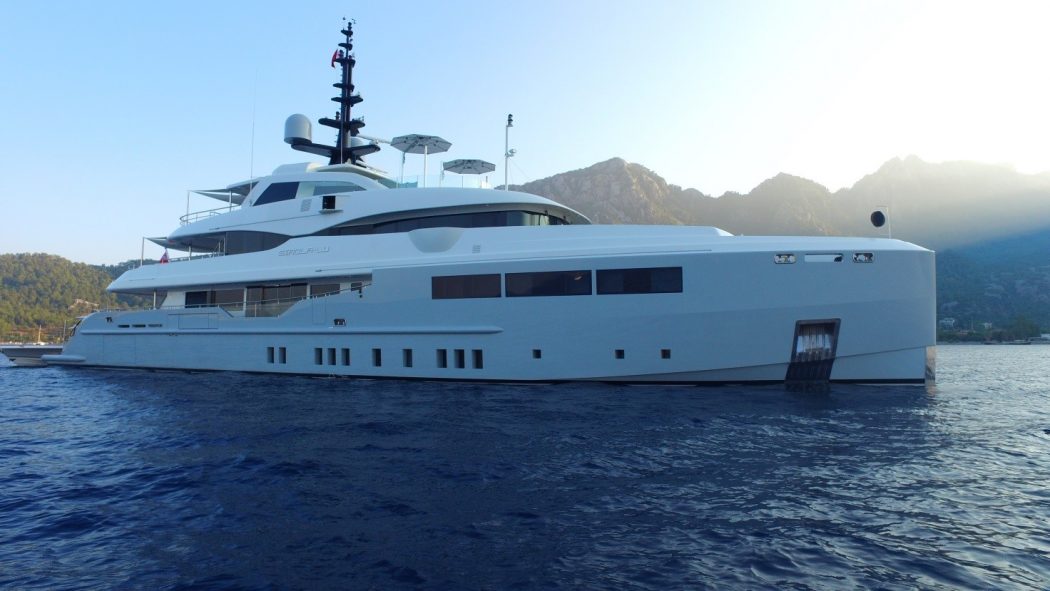 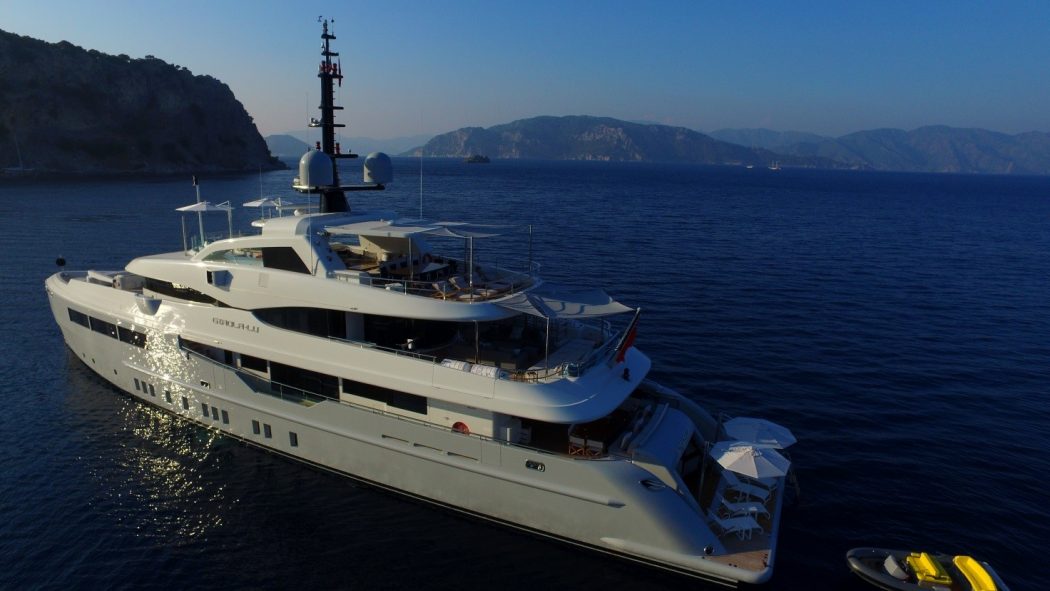 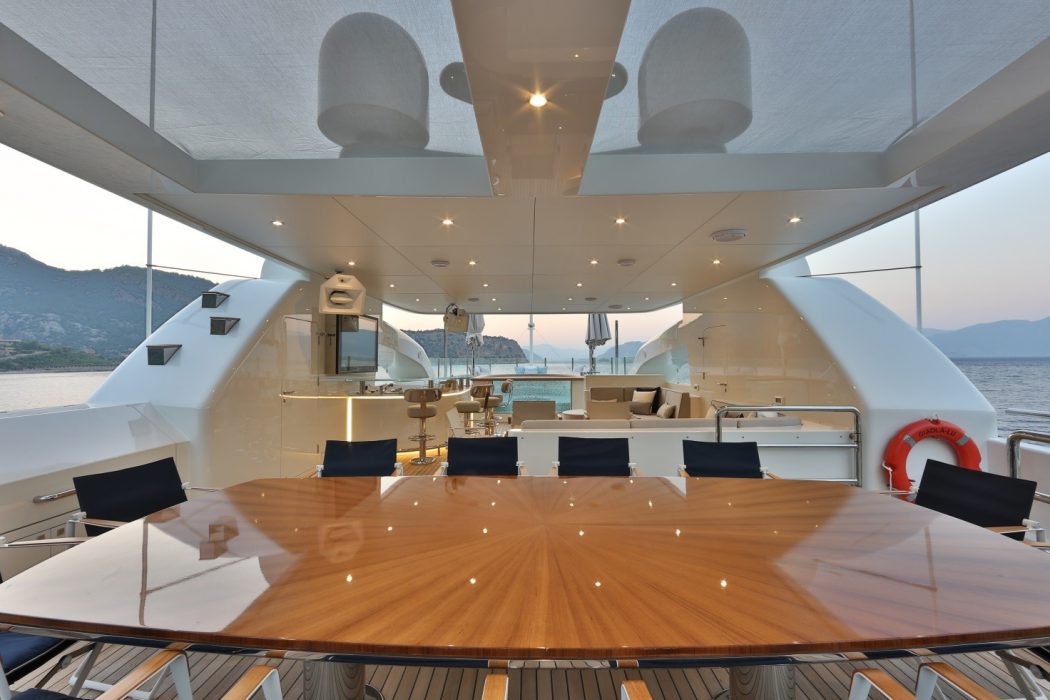 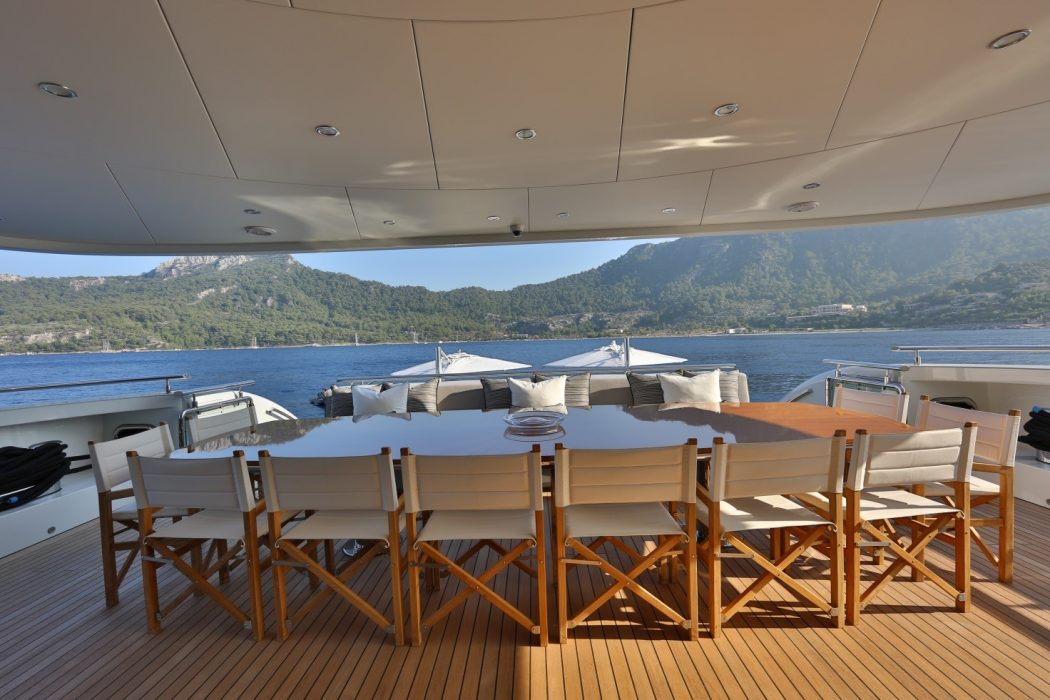 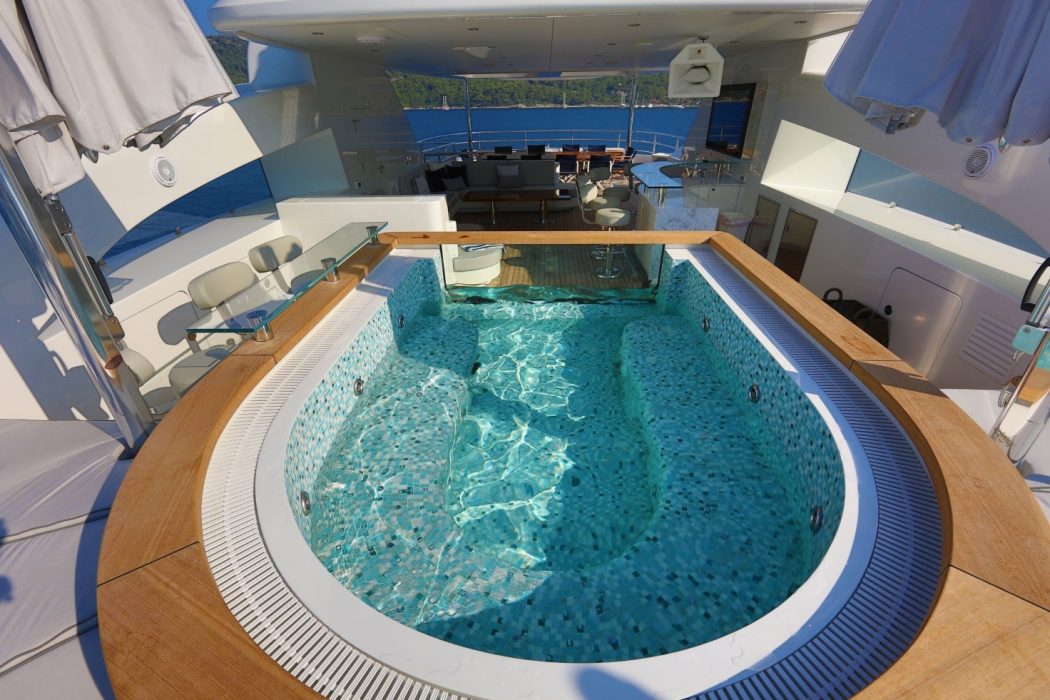 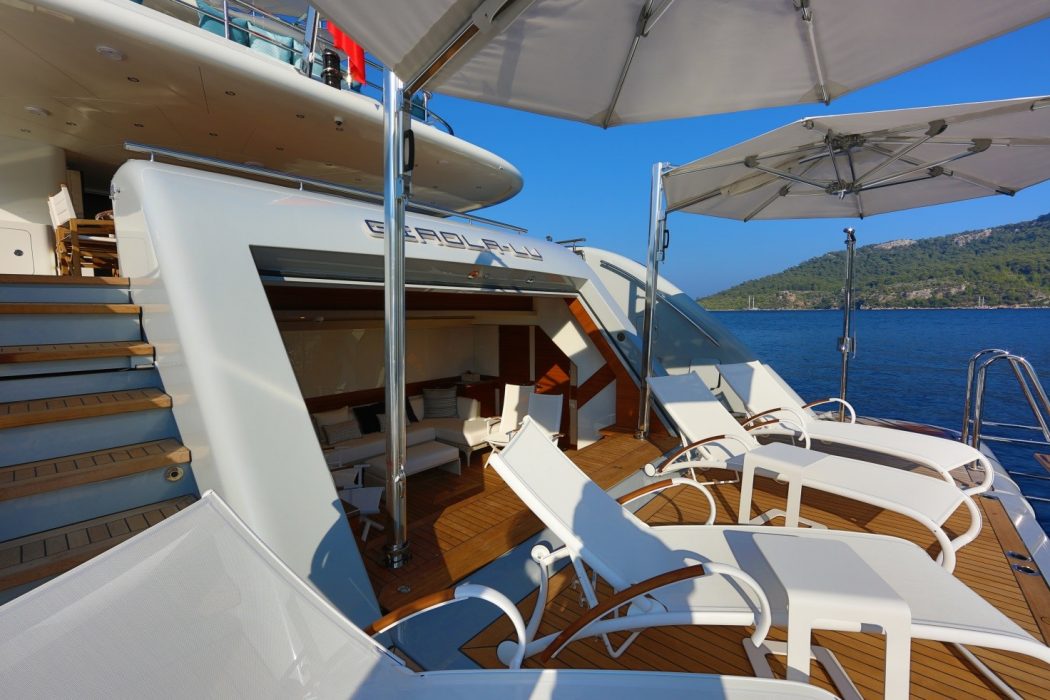 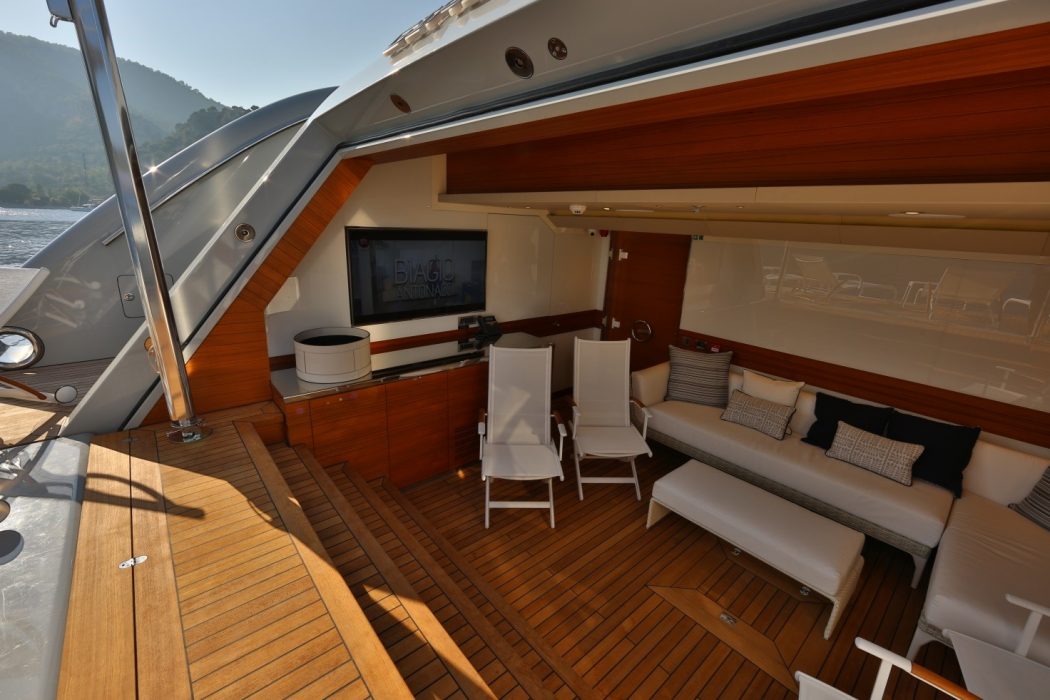 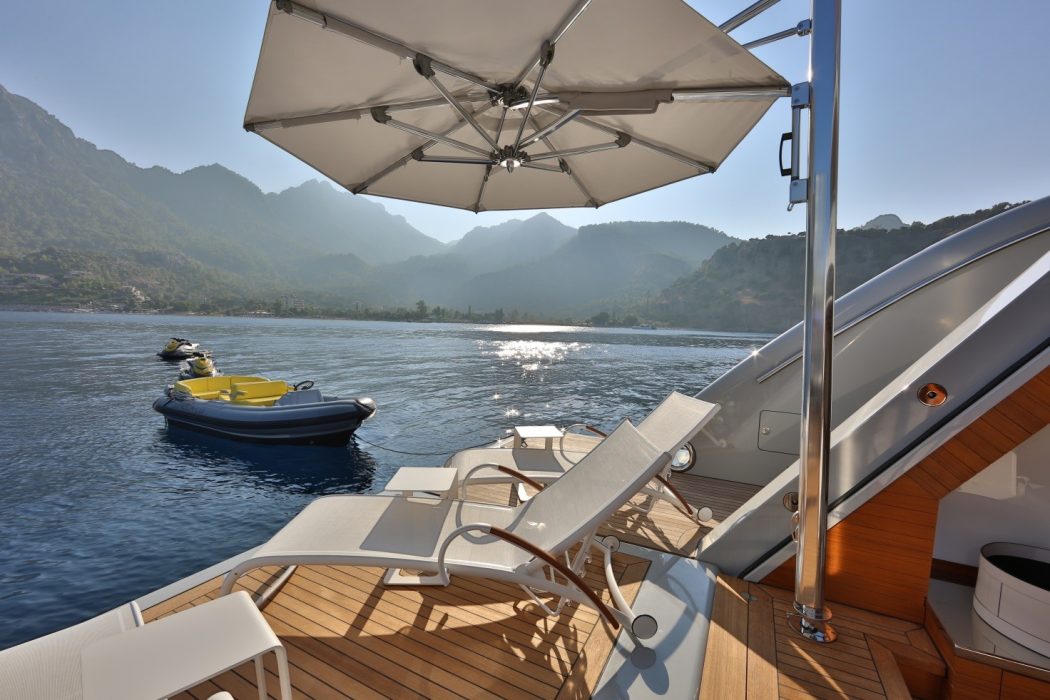 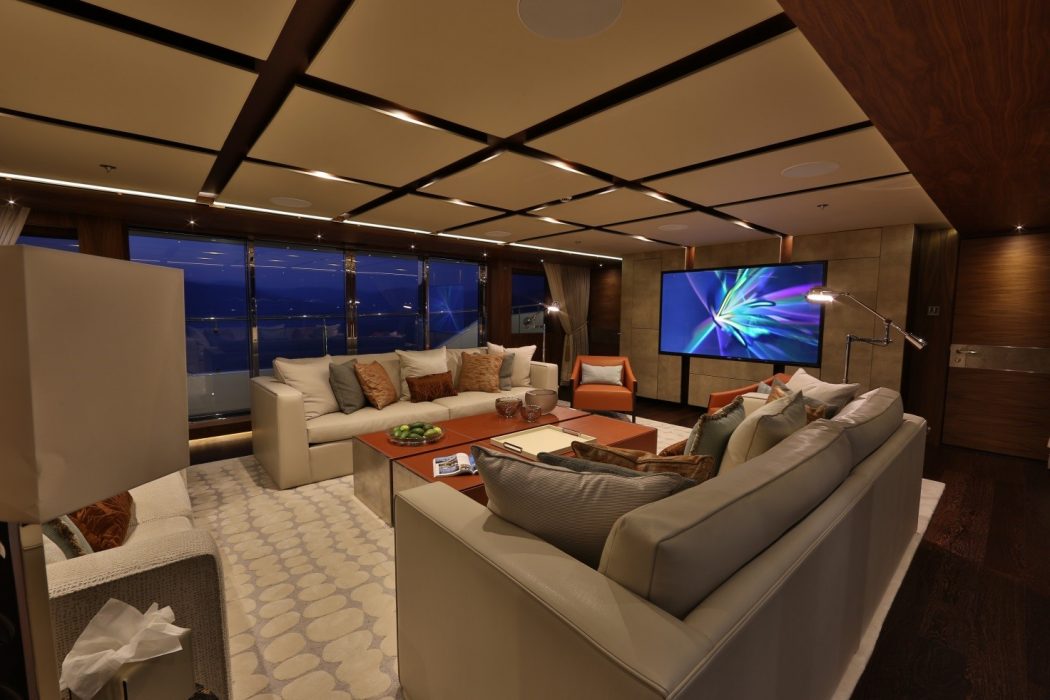 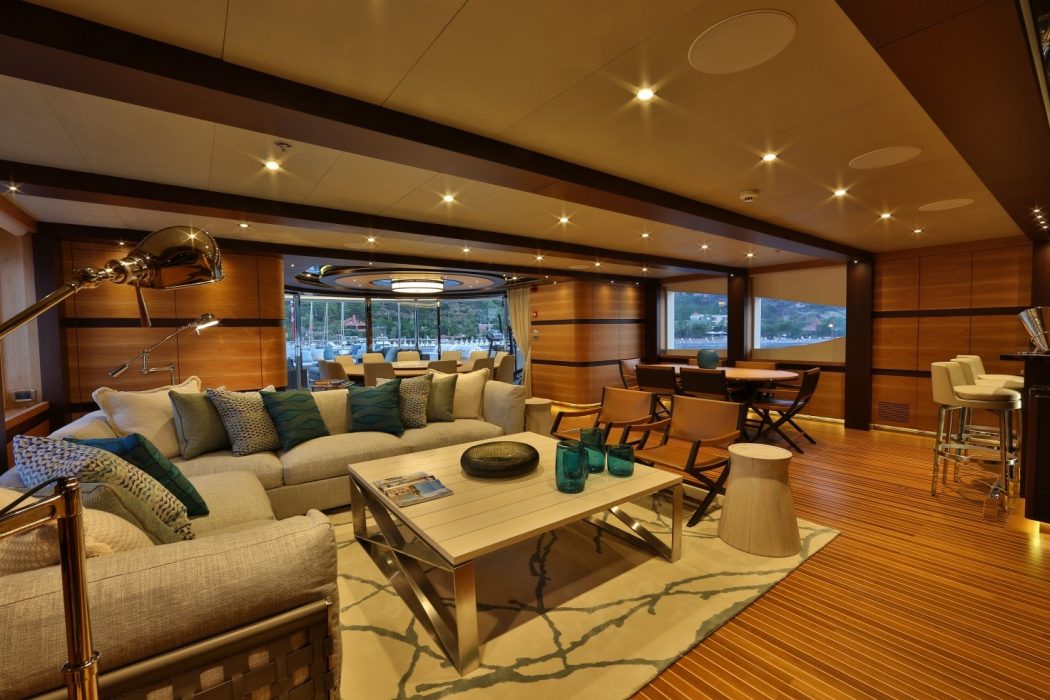 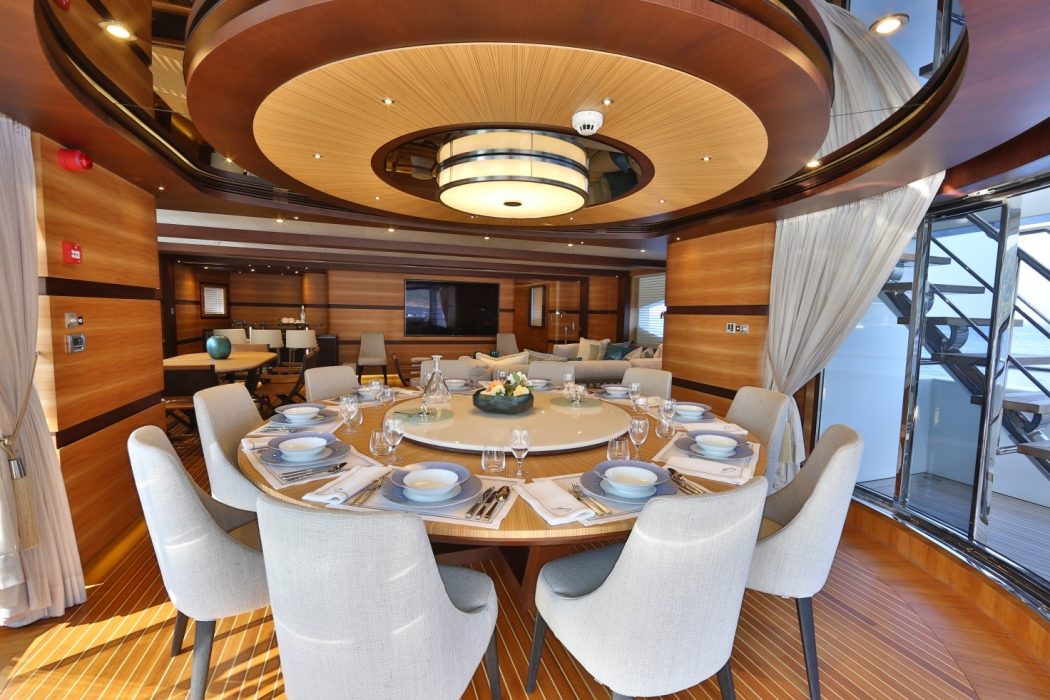 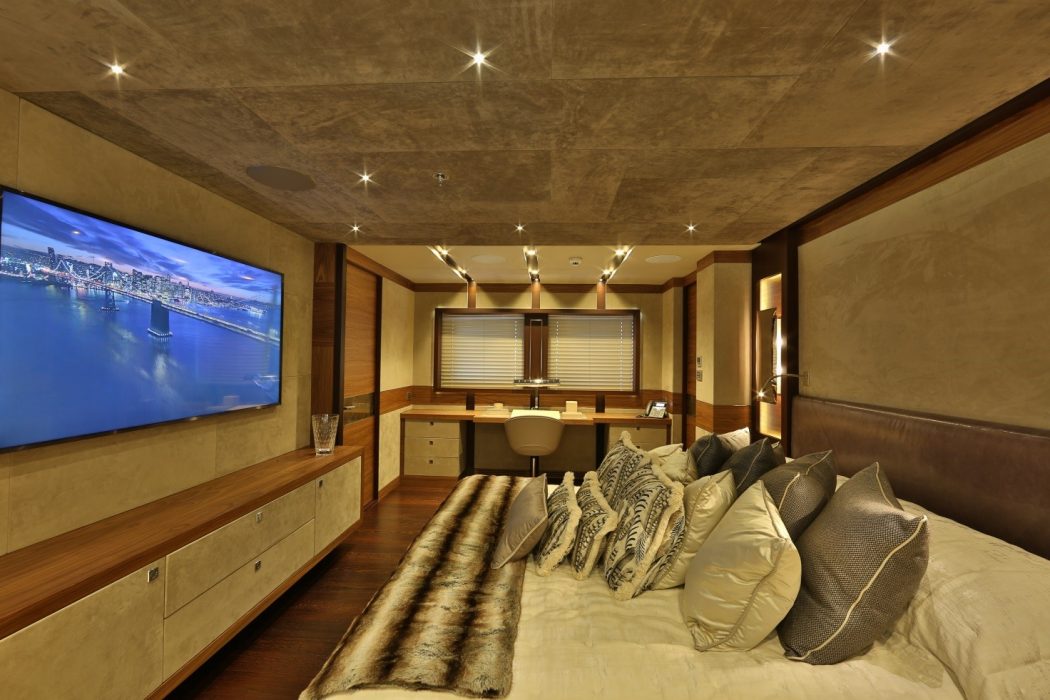 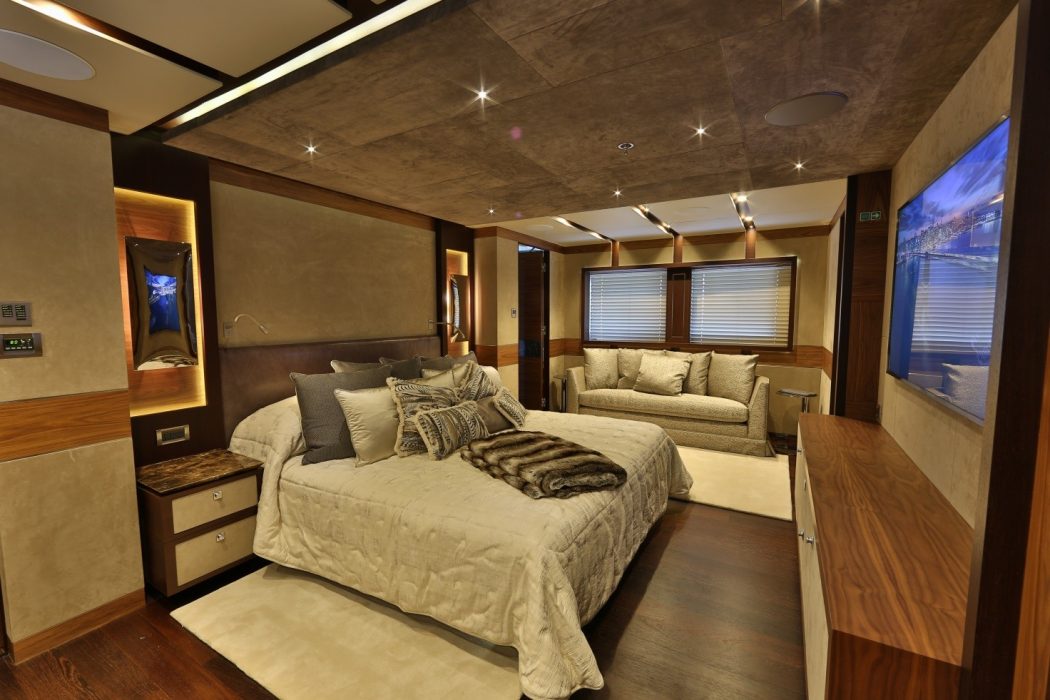 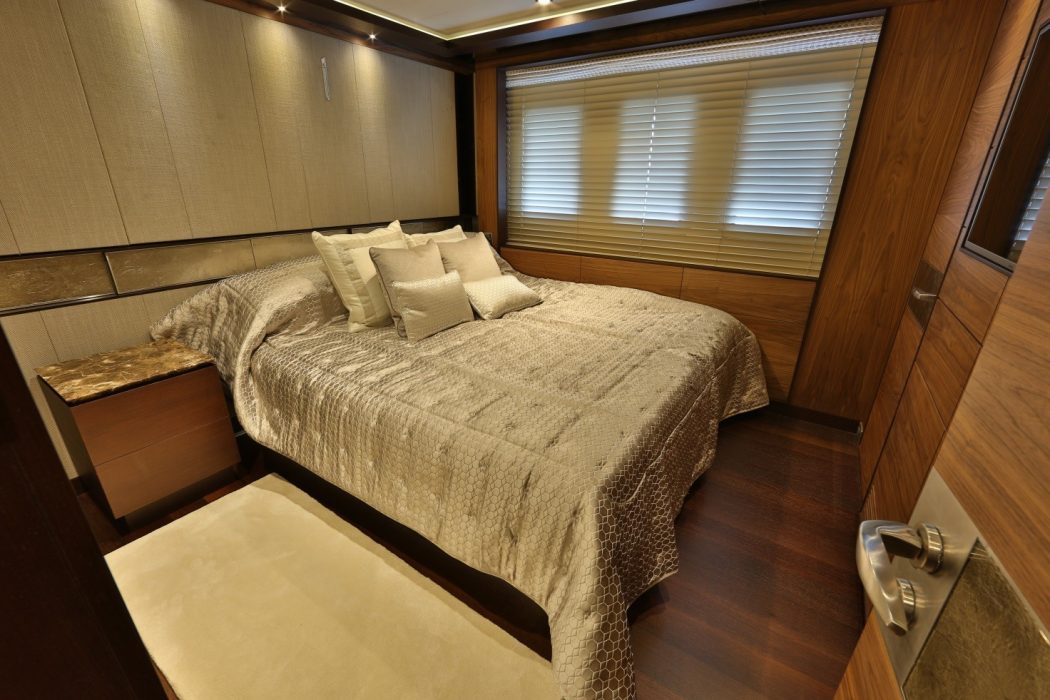 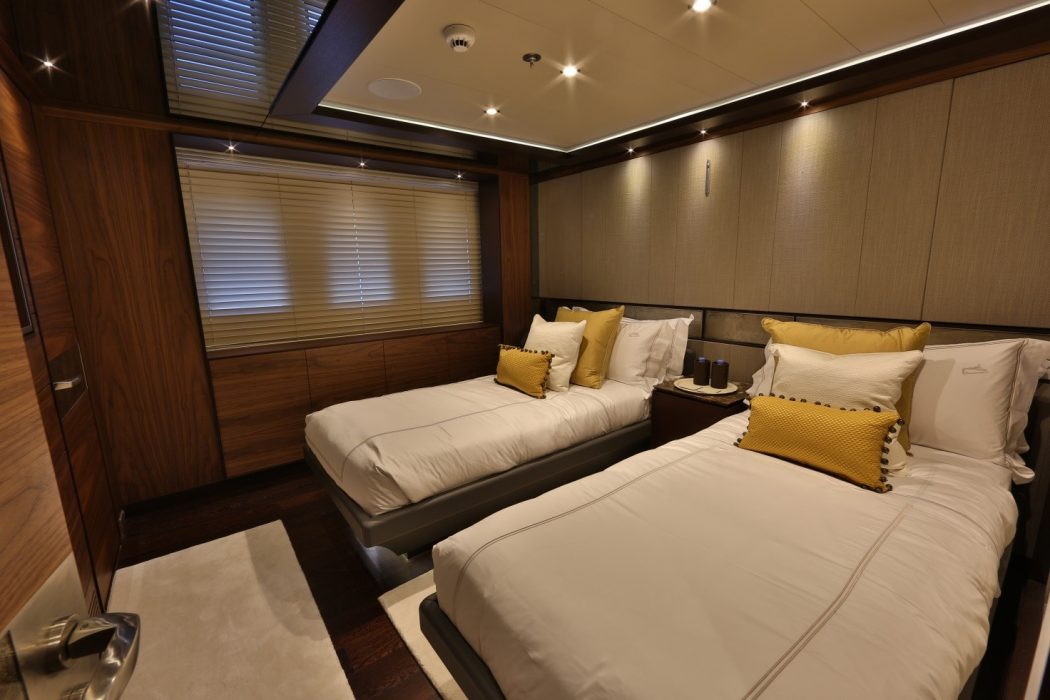 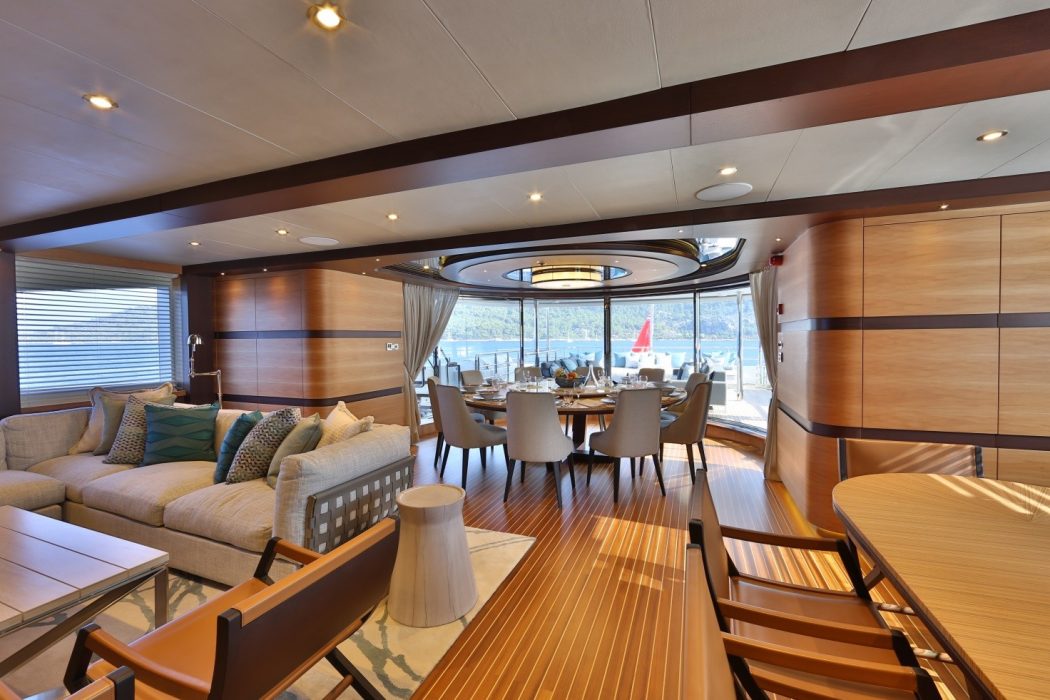 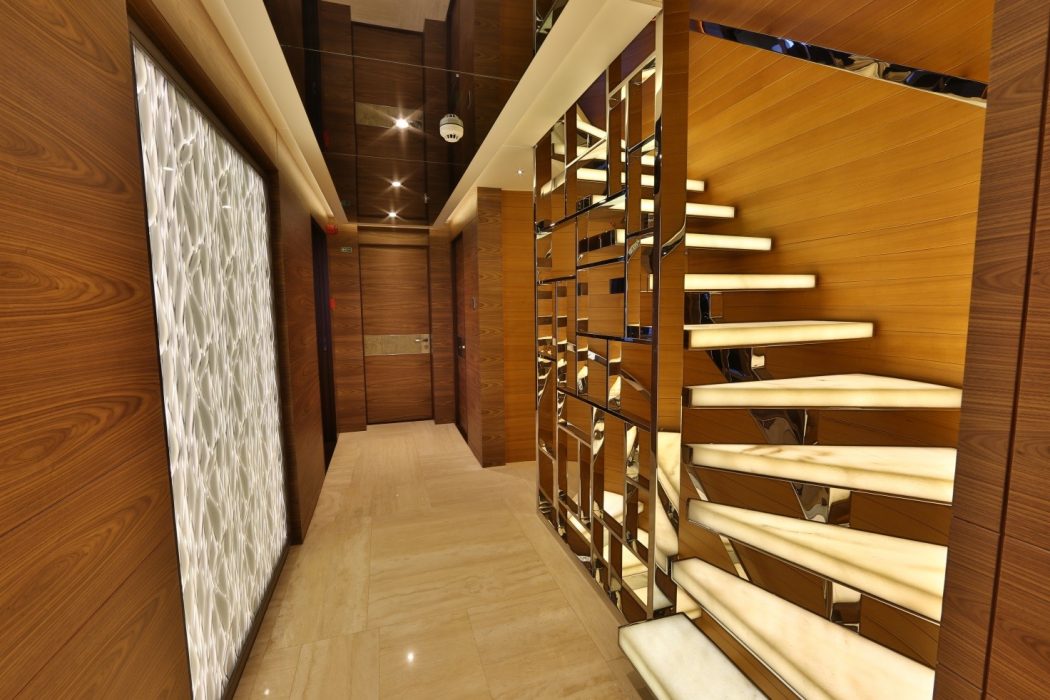 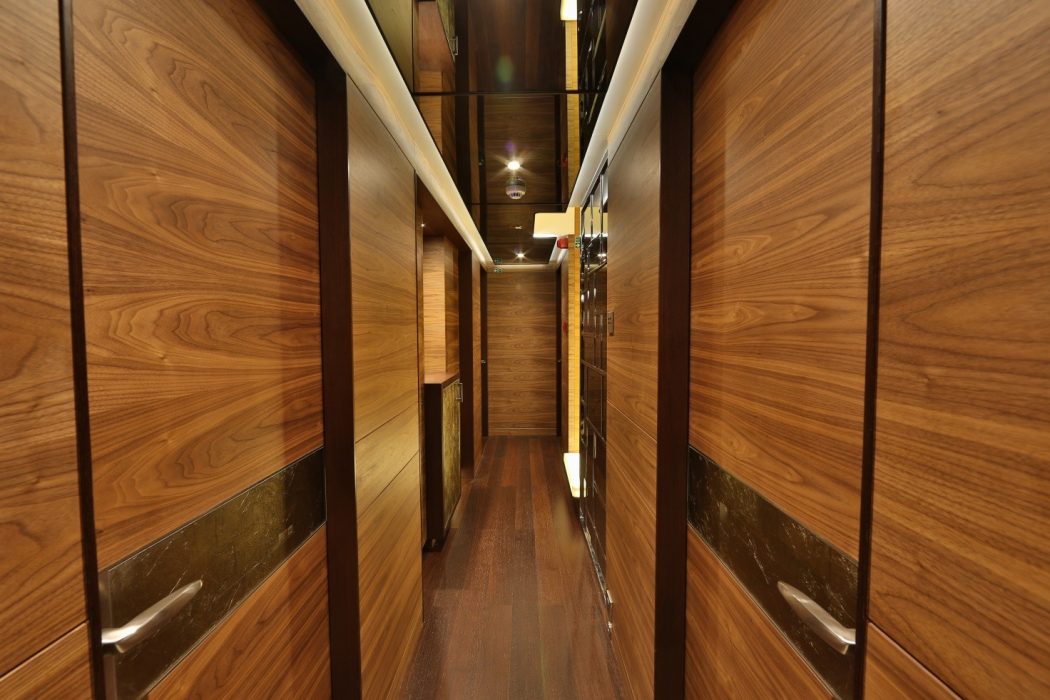 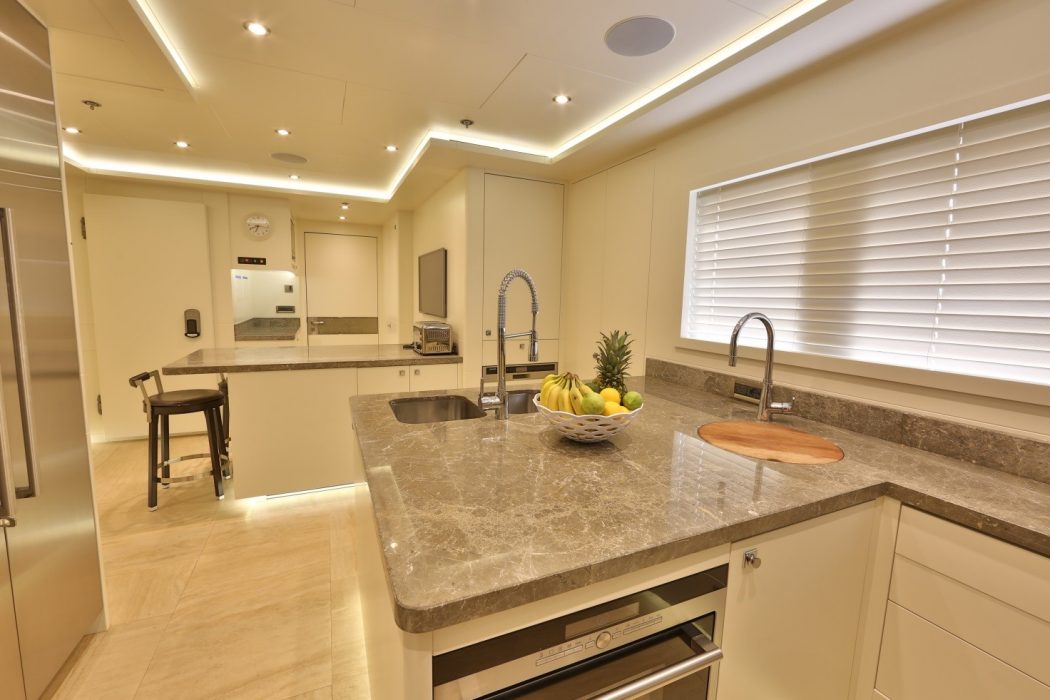 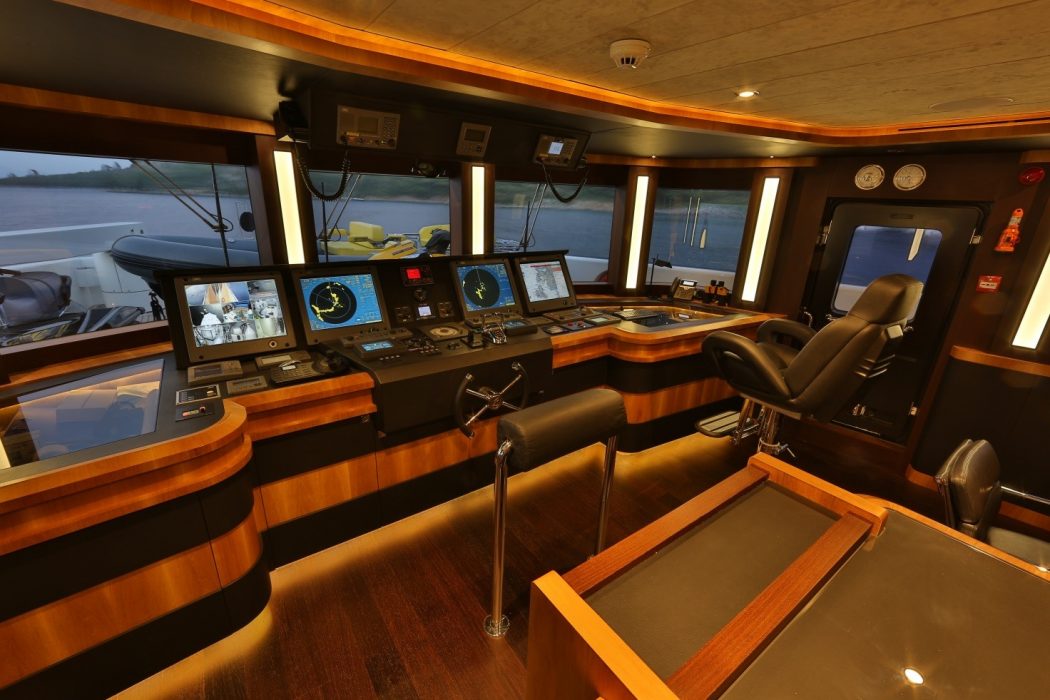 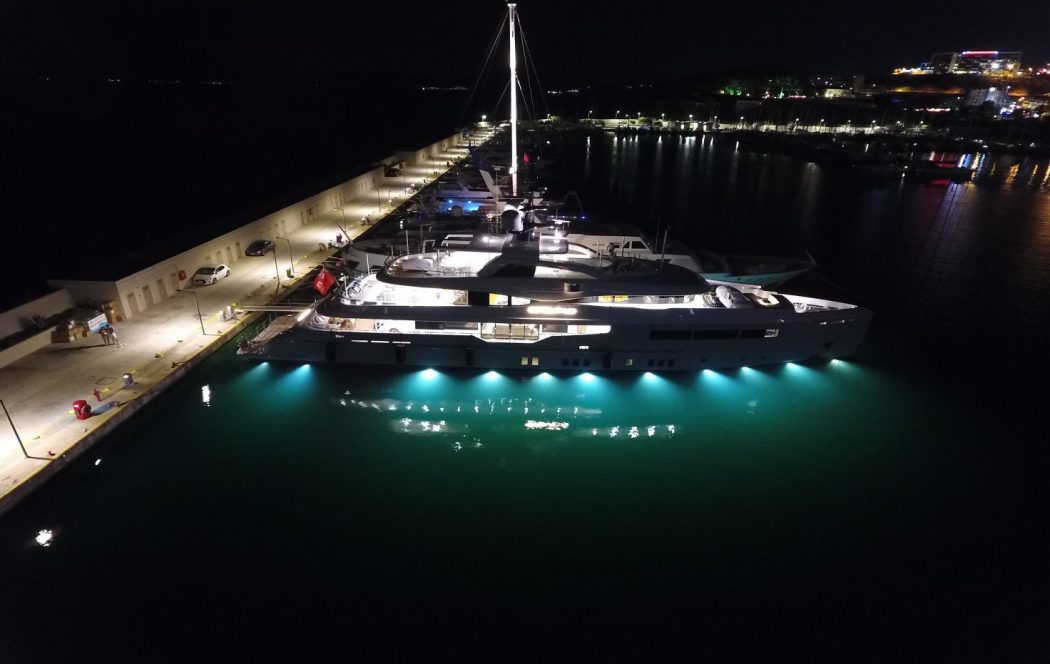 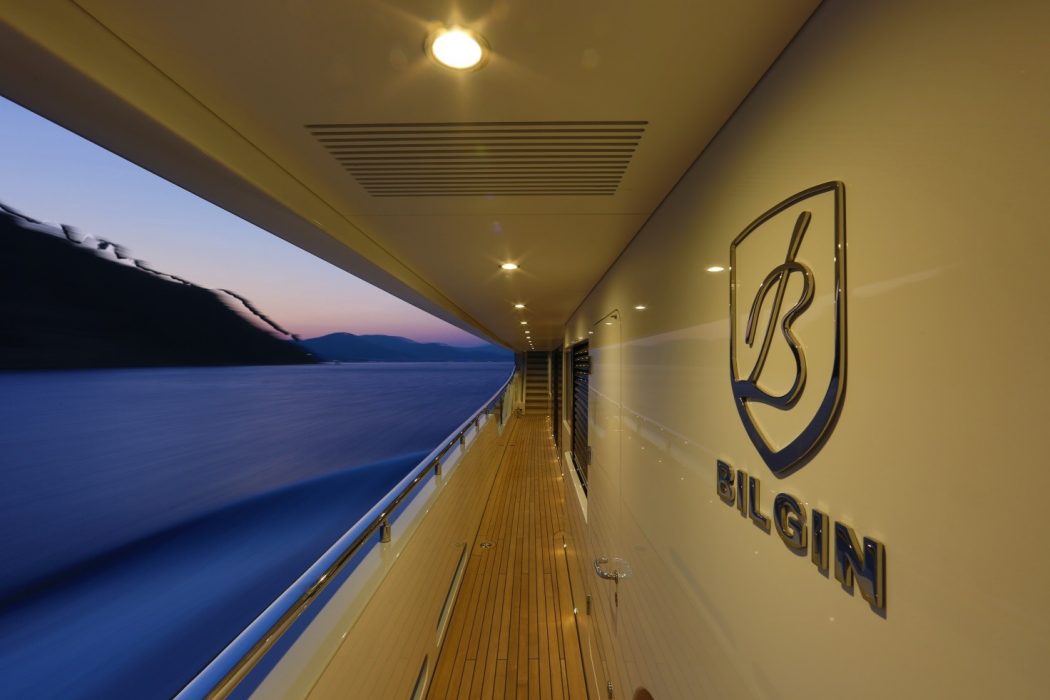 Bodrum Bay had a last minute guests last week. Bilgin 155, the latest delivery of the luxury boat builder, returned to Turkish waters earlier than expected for her exterior shots. Attracting quite a lot attention from passersby, she played the lead role at her exterior still and video shootings in the wilds of Bodrum Bay. She had been delivered to her Mexican owner and seen off to international waters from West İstanbul Marina on 21st of July.

This was the first fully custom superyacht for the client who arrived in Istanbul for the delivery as an extended family of 3 generations. As the layout of spaces was according to indoor/outdoor family living and accommodating a large number of guests, they stayed on board while Bilgin 155 team was dealing with the final arrangements. Giaola-Lu and the team became immediately a part of our client’s family.

So instead of a ceremony, she was seen off to international waters by the team who has worked diligently on her until the very last moment to ensure it would meet the exacting demands of Bilgin Yachts Shipyard.

The most recent vessel of the Bilgin’s displacement line, Bilgin 155 (46.80 meter) has a beam of 9.20 meters and a draft of 2.45 meters.Designed and equipped to RINA Commercial Class Gibraltar Cross Hull, Mach, Y unrestricted and LY3 regulations, she will be able to be used for unrestricted coastal and offshore cruising around Europe, Mediterranean, Atlantic and the Caribbean.

Tailored to her Mexican client’s specifications by H2 in conjunction with Bilgin Design Team, she has an alluring outlook, even at first sight. With her axe bow concept, she features a light grey steel hull and a white aluminum superstructure.On deck tender storage allows for 2 jet skis and a Castoldi jet tender forward of the wheelhouse with a built in crane for ease of access. There is also a transversely positioned garage forward of the Beachclub for storage of a second Castoldi tender.The client had a clear vision for the exterior lines of Giaola-Lu as ‘modern, clean and timeless’ with the plumb bow as a striking feature. Working with the team at H2 Yacht Design a sleek profile with elegant proportions was developed and approved.

A variety of stones, which feature emperador dark, white onyx, cream travertine and Eramosa were sourced within Turkey

The deck areas are shaded with removable umbrellas from Tuuci and custom designed shade sails in all areas allowing for a full flexibility of shade and sun. The sundeck is equipped with a large glass front Jacuzzi, 2 bar areas, a large dining table and a stadium quality entertainment system.She has a vast expanse of exterior space with a fully serviced beach club, 2 dining areas, 4 lounging areas, a glass front Jacuzzi, 2 sunbed areas with built in adjustable backrests.On the exterior the Beachclub is designed with daytime relaxing at water level in mind. She contains a wide range of loose exterior furniture both custom made and from Valdenassi, Minotti, Dedon, Manutti, Summit Furniture and Paola Lenti.

Many elements were inspired by Scandinavian and high end residential detailing in order to create a homely yet modern feel.Giaola-Lu was planned with an emphasis on outdoor living and this results with the skylounge being an indoor/outdoor type of space that also houses the formal indoor/outdoor dining table.

The layout of spaces was according to indoor/outdoor family living and accommodating a large number of guests over 4 lower deck guest cabins, a VIP cabin and 1 main deck owner suite.The VIP cabin is equivalent to owner’s cabin in terms of comfort and style. One of the 48’’ TVs of the room is hidden inside the mirror so that it doesn’t disturb the tranquil and peaceful mood while off.

Designed for an optimum combination of sailing performance and comfort, her specifications are truly impressive. Powered by two CAT C32 1450bhp 2300 rpm Marine Diesel Engines, she is expected to reach a maximum speed of 16 knots.