Emirates is a company that’s very close to Formula 1 business-wise, yet it was only pretty recently that it turned full-throttle mode on its advertising, with two most interesting video ads featuring annoyingly rich Jennifer Aniston and a few jetmen flying next to an Airbus A380.

The new jetman ad sees Emirates Airbus A380 and Jetman Dubai fly together in a breathtaking formation flight over Dubai to make aviation history, kind of reminding us of some of Red Bull’s spectacular show runs or Lotus’ F1-car-jumping truck. Definitely a strong initiative, the inevitably popular jetman clip quickly went viral and was viewed over four million times in one single day. That is almost the exact amount of views that the previous Emirates ad with Jennifer Aniston got in a month. #hellojetman!

“While the formation flight looked effortless on film, painstaking planning and meticulous collaboration with an intense focus on safety drove all efforts”, noted the creators. And that’s completely understandable. However, “keep the pace up guys”, said petrolheads all over the world. The motorsport community was thrilled to see the company engage in something really special and, most importantly, adrenaline-related.

The previously mentioned Jennifer Aniston commercial, unfortunately, received mixed reviews to say the least, even considering the fact that it was pretty funny (which is always extremely difficult to achieve) and featured an absolute A-lister. From people claiming “the mega-wealthy actress has totally lost touch with reality” to key individuals referring to her even as a “snobby degenerate”, the PR ride for Jennifer is proving to be quite bumpy at the moment. Personally, I see her as a smart and still relevant celebrity who probably had a great time while shooting a quality ad and getting paid 5 million bucks for it. Let’s hope she won’t run out of friends. 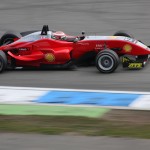 A petrol-brained knight and an explorer from birth, Vincent keeps things fresh by plunging into new depths of the social media side of high-end motorsports.