By Bunmi Ade | We spoke to Christopher Regan, Project Manager for Enel’s activities in Formula E, about their collaboration with the series and their ambitions for a fully green racing event.

Since the inception of the all-electric racing series FIA Formula E in 2014, it has always been its founder Alejandro Agag’s dream to make the series an all-green affair. At present, the racing cars are fully electric but their support activities are yet to go fully green. However, there are positive steps in this direction, for example, their logistics partner DHL’s involvement in optimising the Formula E race calendar to minimise logistics mileage throughout the season.

Enel went a step further at the inaugural New York ePrix making it the first-ever zero-emissions ePrix – achieved by offsetting the event’s emissions through green certificates from its portfolio of renewable energy plants, such as the Enel Green Power Stipa Nayaa 74MW wind farm in Mexico. Christopher Regan, Project Manager for Enel’s activities in Formula E expands on their partnership.

Christopher, how would you personally sum up the Enel-Formula E partnership?

Our contractual relationship with Formula E goes far beyond providing technology in exchange for branding. It’s more about a shared objective to make motorsport sustainable and promote electrical mobility at a global level. As we progress from race to race, we are evolving Formula E’s current energy model towards the concept of a Microgrid – an integrated energy system where all power generation and consumption is managed in an optimal way to maximise energy efficiency and minimise carbon emissions. It can be better understood by examining the four technological pillars on which it is based. Metering technology: a unique Smart Metering system specifically designed to be used in the challenging Formula E event environment, is deployed at each race to capture energy data which should help with the development of solutions to make the series more sustainable. Storage equipment: batteries which enable Formula E to store energy and therefore maximise the events’ renewable generation capacity, whilst also reducing dependence on other non-renewable sources, and the operational costs of hosting the ePrix. Renewable generation – solar panels: since the Marrakech ePrix in Morocco, Enel has installed a solar PV array coupled with its own specific energy storage system. In New York, bifacial solar panel technology was used for the first time. Electric Vehicle charging infrastructure: we presently supply EV charging infrastructure for auxiliary vehicles around the event, track e.g. the Safety and Medical cars; and there is scope to extend this to the race cars in the future.

In addition to the four tangible pillars of the Microgrid, we provide the Energy Management System (EMS) software tool that ties all elements together enabling the technology to work as one integrated product. The EMS collects data from the meters and sends it to the control dashboard which is used to monitor system performance. This has allowed Enel to create an exclusive web app through which Formula E fans can learn more about each race’s energy usage. Alejandro Agag, like us, is pushing for offsetting more races, in parallel to make them more and more efficient. New York’s ePrix was very important as it was the first-ever zero-emissions ePrix so no doubt, this will be further explored in the future.

Also, we will be rolling out Vehicle-to-Grid technology as part of our Formula E Microgrid in future seasons. This is something I am looking forward to – to see how it performs within the Formula E environment.

Formula E is a testbed for all partners and players to develop technology instrumental to the evolution of the event itself but also to the development of our smarter cities of tomorrow.  This sport has a challenging environment but at the same time a productive networking and information sharing opportunity where opinions on many of tomorrow’s key energy and mobility-related concerns are often debated.

What about the web app?

I’m quite happy that the app has been widely accepted and sought after. We introduced it about six months ago and at the New York ePrix, we had the latest version displayed on large screens. The interest it is generating (no pun intended!) is very encouraging. The Enel stand and eMotion Club were busy with fans interacting and interested in the real-time information being displayed. It is helping us achieve something we firmly believe in – giving energy use, in this case, related to electric mobility, the social relevance we feel it should have, facilitated largely by the information that is simple and easy to understand. We also provide regular tweets on the app and data on various platforms. 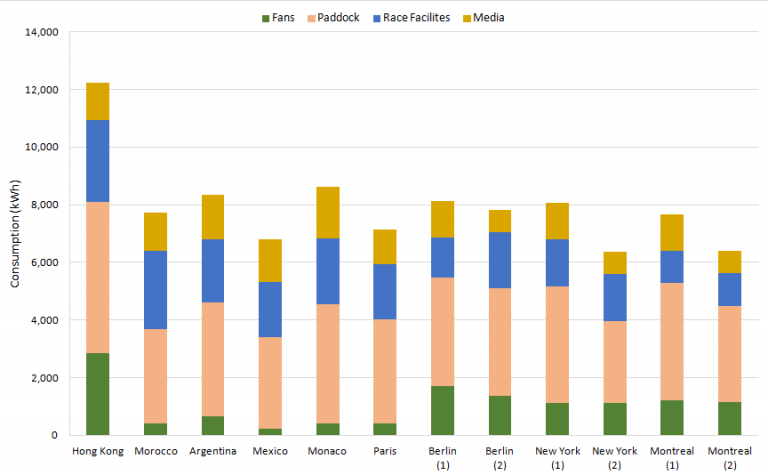 Well, Enel has a commercial V2G project in Denmark which is quite successful – it’s a project with the local utility fleet (Frederiksberg Forsyning in Copenhagen). We have 10 electric Nissan e-NV200 vans which are used on a regular basis to provide power back into the grid. Enel has a contract to sell energy (approximately 100kW) back to the grid proving the technology from both a technical and commercial point of view.

Having said that, a lot of EV users would like to know when/if V2G will become a mass-market commodity. We know that the challenges related to the EV world in terms of affordability and availability are slowly but surely being met, but I cannot say exactly when Vehicle-to-Grid technology will become available to the mass public. Amongst other things, there are challenges to be addressed on regulatory issues in various countries so overall it is still early to say when it will become mainstream.

Bunmi Ade is a motorsport consultant with several years’ experience as a Business Development Manager and Brand Influencer for motorsport brands. She has worked with Driven International since 2015 and is responsible for new markets at the consultancy whose clients include British Automobile Racing Club. Bunmi founded the GridPasses website, hosts regular business roundtable discussions with motorsport industry experts and occasionally writes for various publications like Times Newspaper, Paddock magazine and eRacingMagazine.