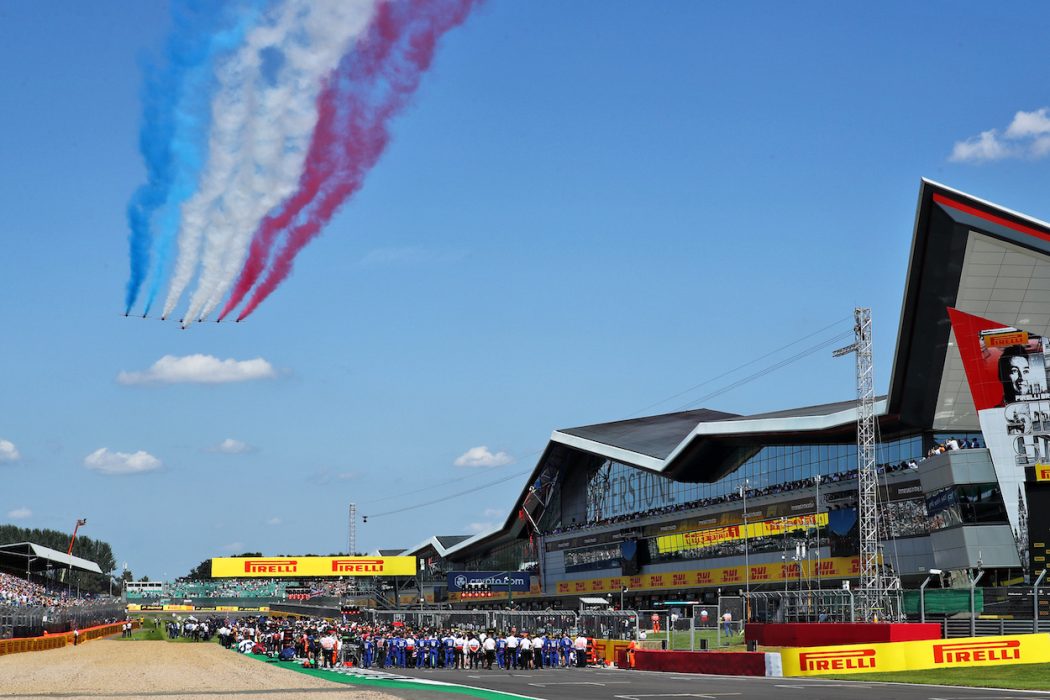 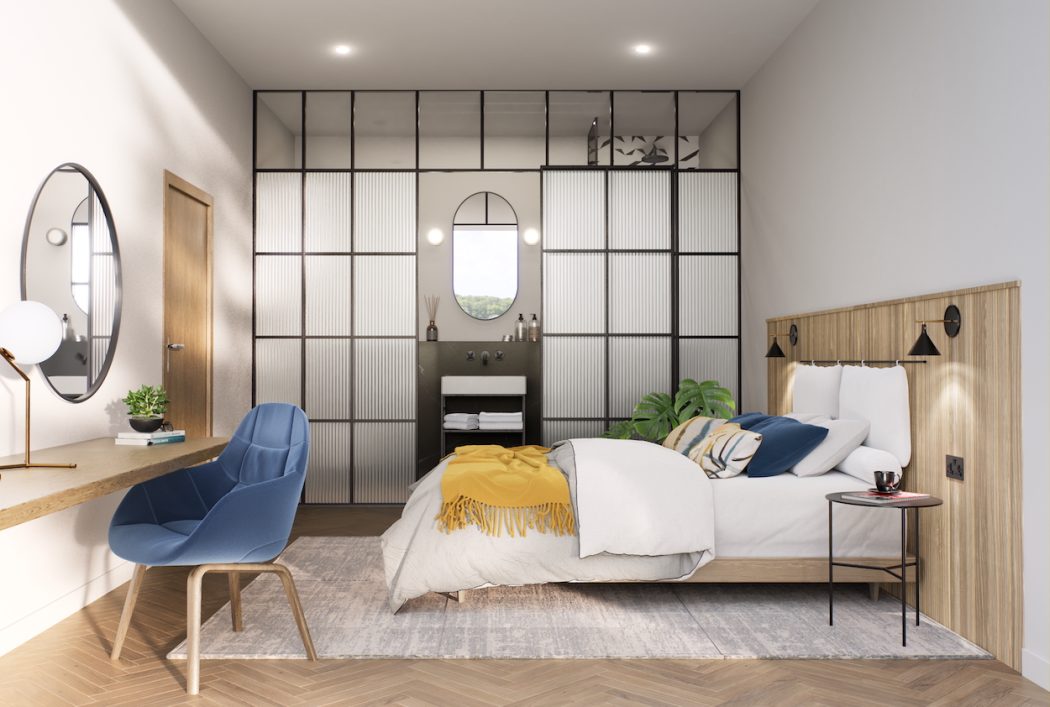 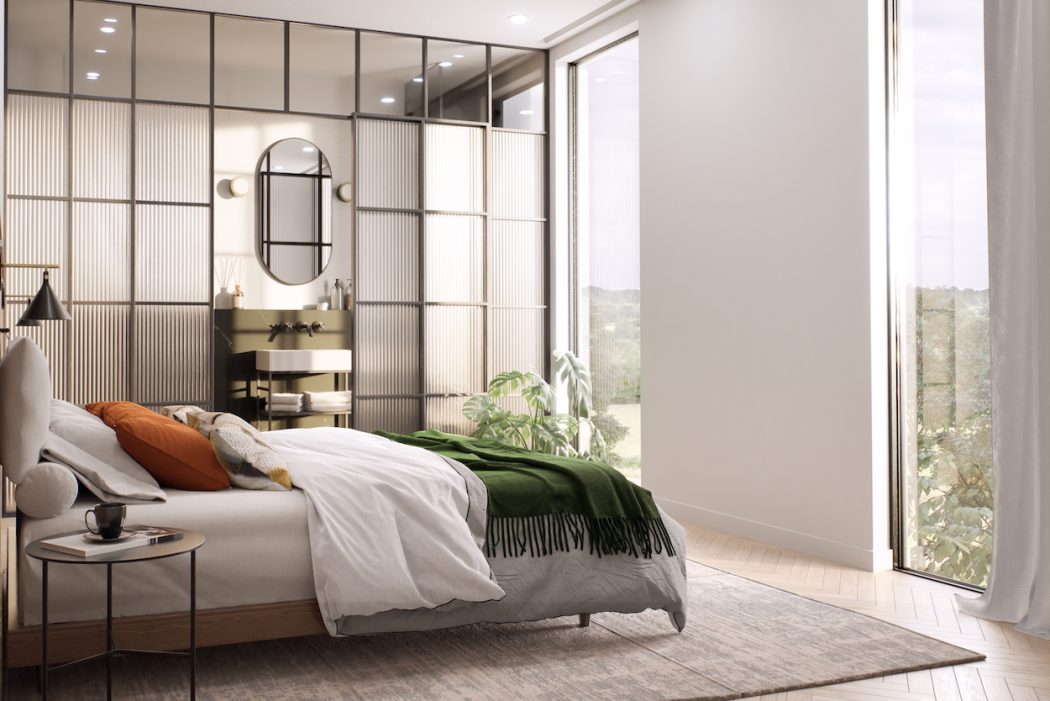 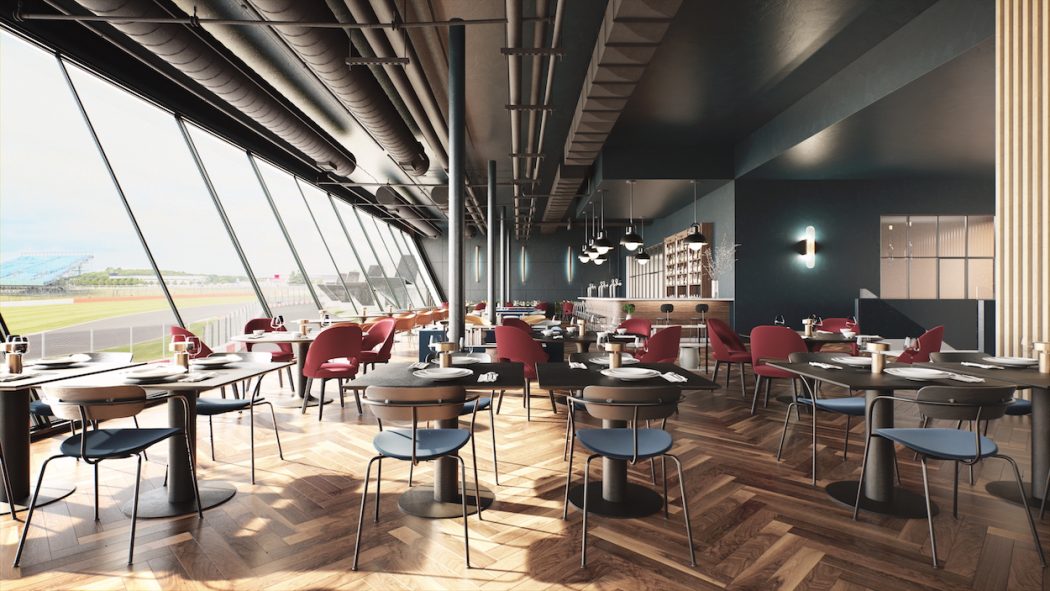 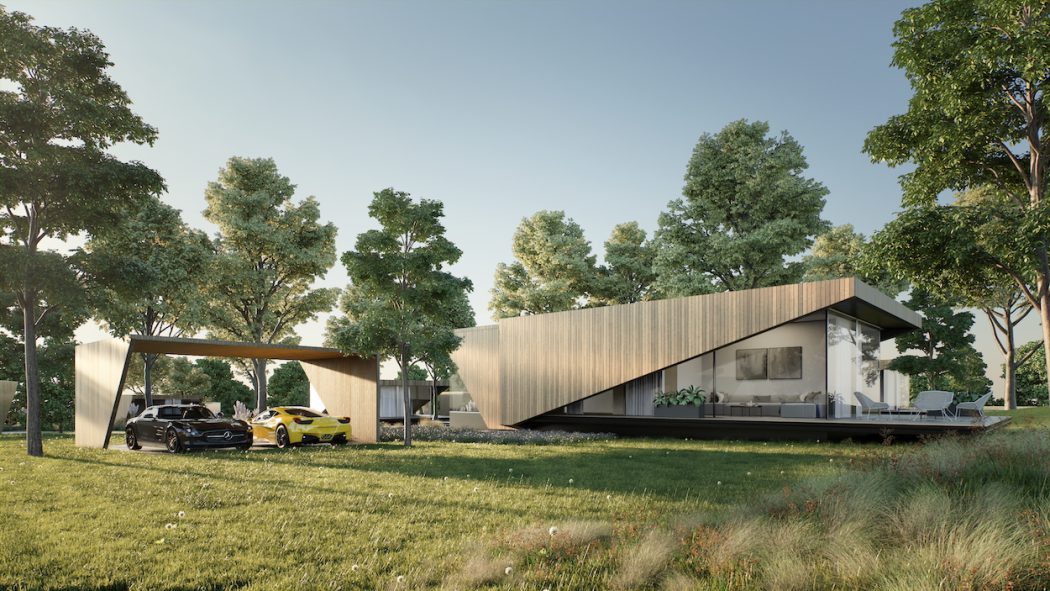 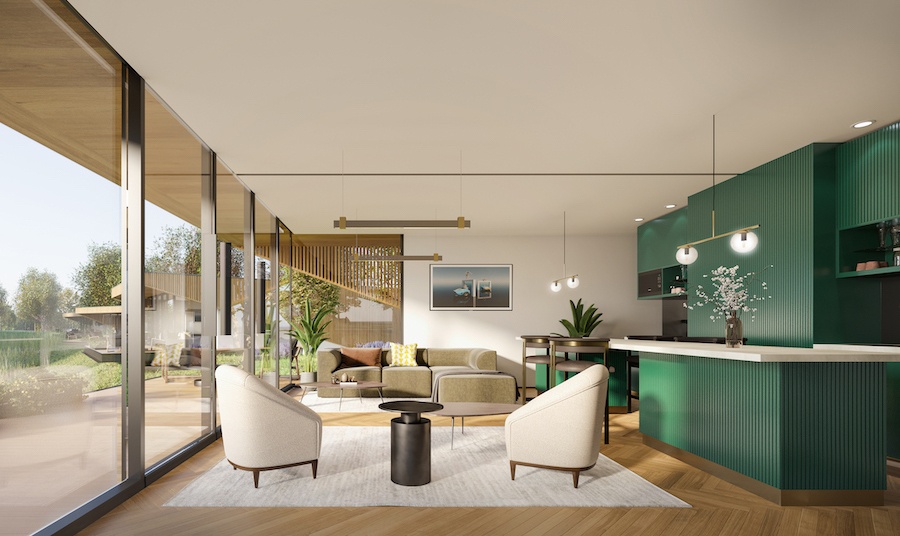 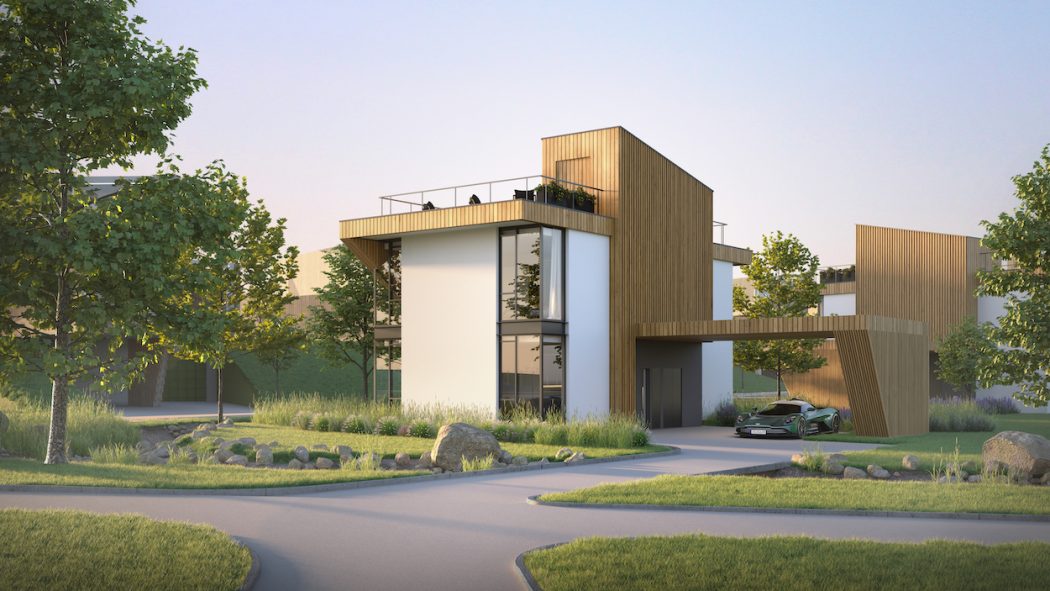 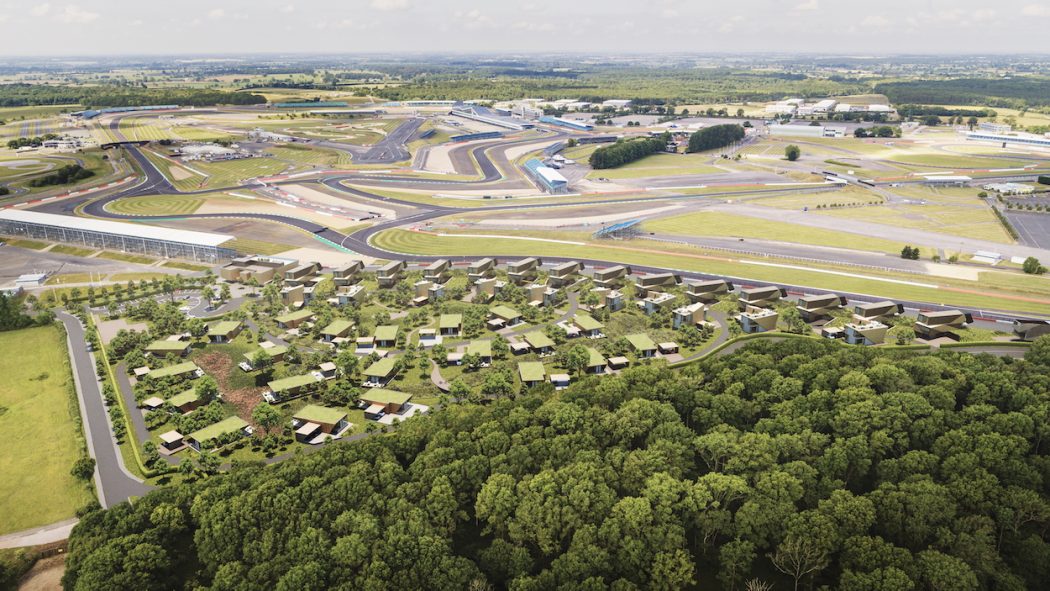 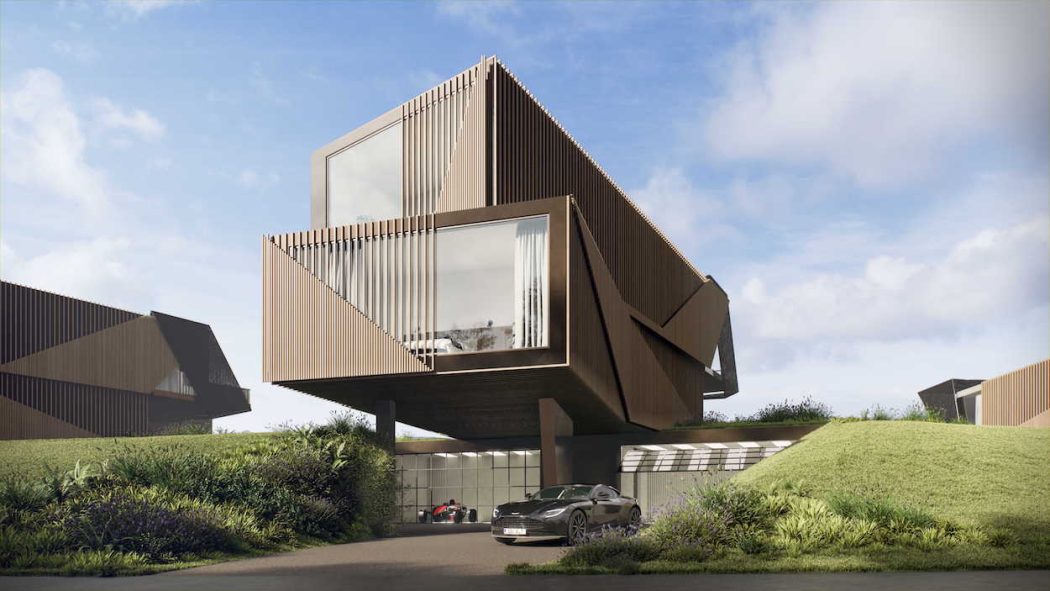 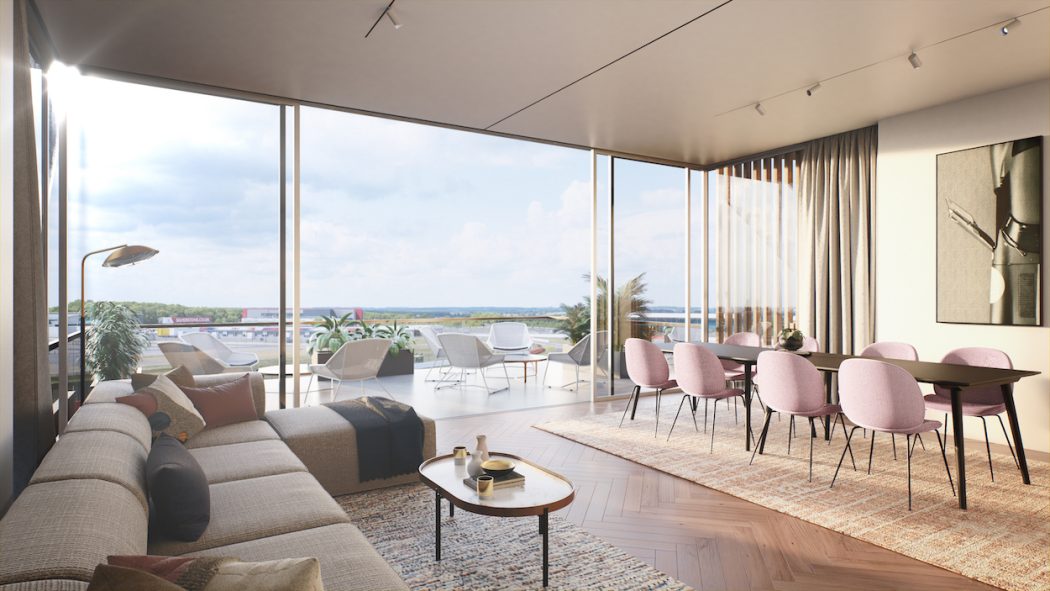 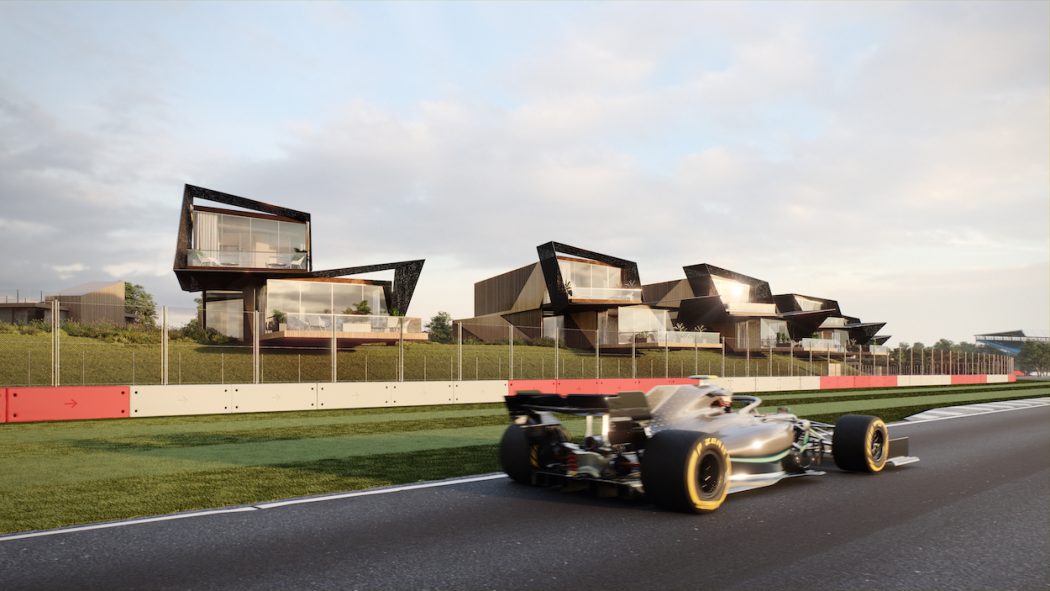 With a record 400,000+ Formula 1 fans heading to this weekend’s British Grand Prix, construction is well underway on 60 exclusive residences that come with the best seats in the house. Escapade Silverstone is just 36ft from the most fabled tarmac in motorsport, with a clubhouse offering panoramic views over the fearsome series of corners that could see Hamilton and Verstappen duelling at up to 180mph. Half of the units have already sold off-plan, with the first owners and guests due to be welcomed in time for next year’s GP.

As the home of British motorsport prepares to welcome record crowds at this weekend’s Grand Prix, new pictures have been released of the luxury residences currently being built just yards from Silverstone’s hallowed tarmac.

Escapade Silverstone is an £80m development of two, three and four-bedroom residences next to the racetrack’s most legendary series of corners – Copse, Maggots, Becketts and Chapel – which Formula 1 drivers approach at a g-force inducing 180mph.

The flagship development, which is due for completion in 2023, features a clubhouse with floor-to-ceiling windows and an 8.5m high roof terrace offering panoramic views across the track that will make it the spectating equivalent of the Royal Box at Wimbledon’s Centre Court, and entertaining space to match the superyachts that gather for Monaco’s Grand Prix.

The £2.2m four-bedroom units will sit just 36ft (11m) from the edge of Britain’s most famous racetrack, and feature cantilevered terraces that allow owners and guests to get even closer to the high-octane action.

Meanwhile, the two-bedroom units, which are priced from £750,000, are set back from the track but offer exclusive viewing from Escapade’s clubhouse. All residences are sumptuously appointed and feature private, secure parking with easy access to the track – enabling users to put their own vehicle and driving skills to the test on non-race days.

Half of the 60 residences have already sold off-plan, with the first phase of 37 due to be operating in time for next summer’s Grand Prix. While owners will be able to stay at their residence whenever they wish, the units are also designed to be income-generating commercial property investments.

Escapade will be operated as high-end short-stay accommodation and marketed to the 1.5 million people who come to Silverstone throughout the year for a packed calendar of races, track days, events and conferences.

Residence owners pay no maintenance or service charges and will receive 35% of the gross revenue generated by their unit – equivalent to the operating margin of a well-run, high-end hotel. Their investment is forecast to return an annual net yield of 5.5%, depending on personal usage.

Owners and guests will enjoy exclusive access to the Escapade clubhouse, which, in addition to breathtaking views of the circuit, boasts a driver-focussed gym, swimming pool and sauna, restaurant, bar, large roof terrace and private dining room.

All come with a 125-year lease and will be fully managed by Silverstone, with maintenance, marketing and management of guest stay all taken care of.

Buyers will also be granted founding membership, giving them free spectator entry to all major race events, use of the Escapade clubhouse – even when they’re not staying – priority track access and exclusive invites to owner-only events, track days and trips.

Will Tindall, Founder and CEO of  Escapade commented:

The British Grand Prix is the pinnacle of the global motorsport calendar, but Silverstone is a place of pilgrimage all year round. Escapade Silverstone is the ultimate place to share the joy and spectacle of speed – whether as a driver or a spectator – and a unique investment opportunity which combines the chance to own a slice of this iconic venue with a highly competitive commercial property yield.

We’re creating a community that shares a passion for precision, performance and speed. Escapade is being built with the same combination of flair, function, craftsmanship, grace and elegance as the Formula 1 cars that will roar past our doorstep this weekend. When complete, it will channel the exhilaration and excitement that Silverstone has embodied for three-quarters of a century.

Millions of people from around the world will be joining us – either in person or watching live on TV – for this weekend’s celebration of speed, power and courage. I’m proud to say that when they do, they’ll notice that Silverstone is gaining a new landmark.

Construction is now well underway and, when complete, Escapade will be the most dramatic addition to Silverstone since the opening a decade ago of The Wing, our £27m pit, paddock and media centre. Escapade’s design captures in steel, glass and concrete the beauty and prestige of Silverstone’s motor racing past, and the potential of our future.