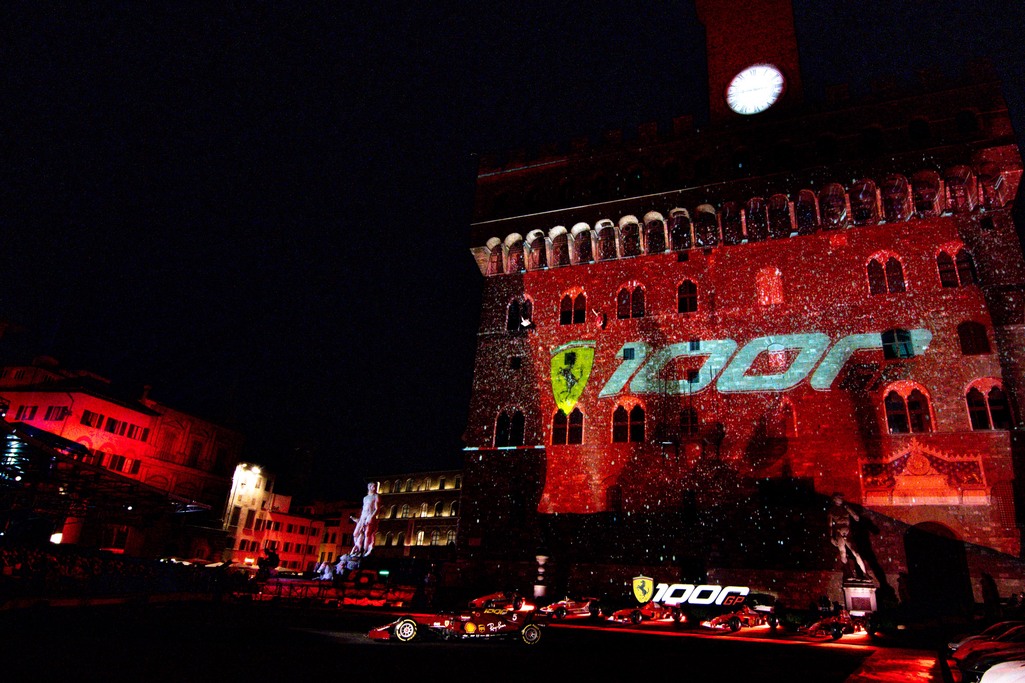 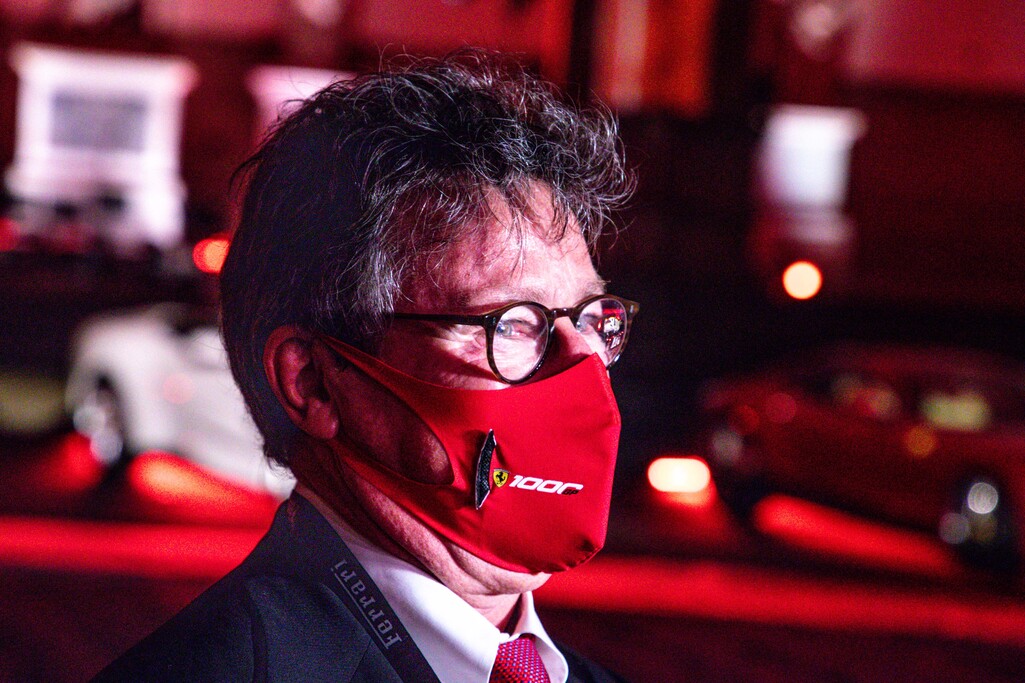 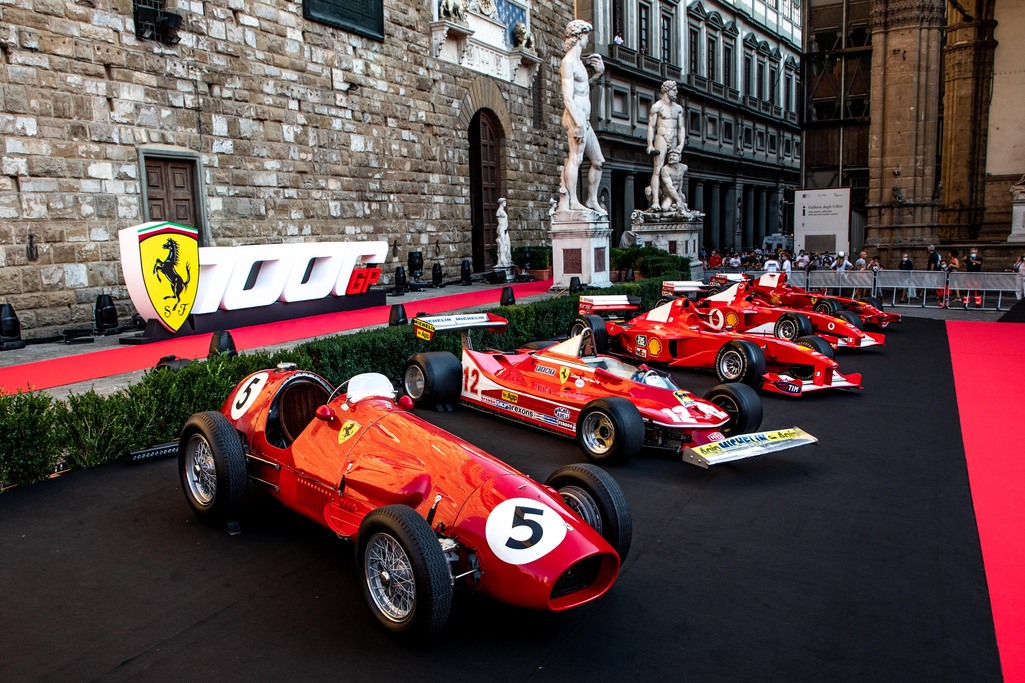 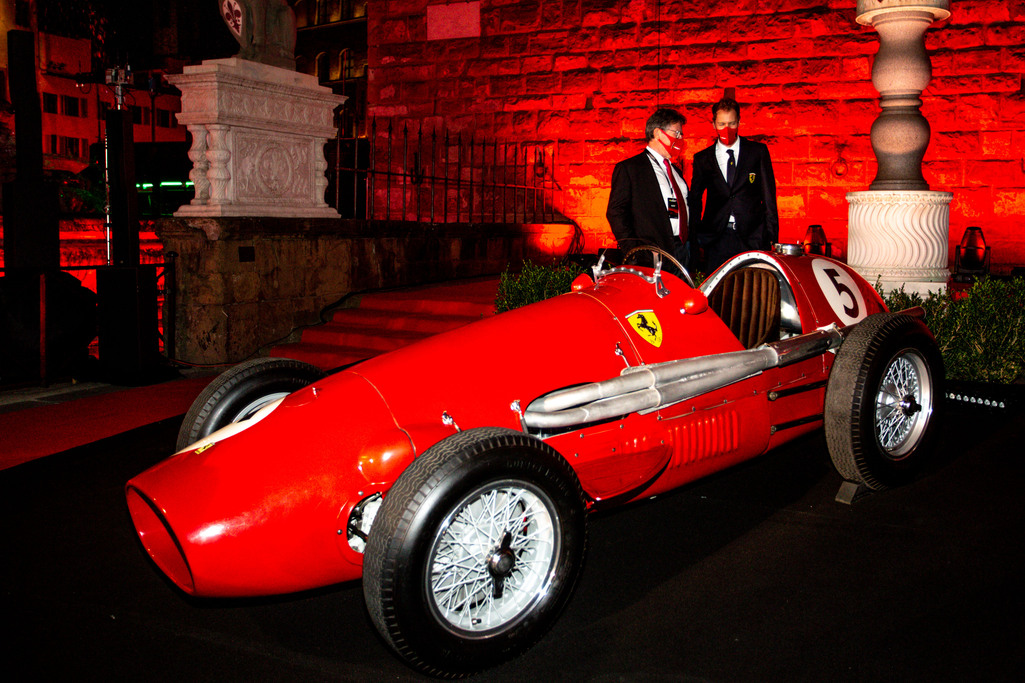 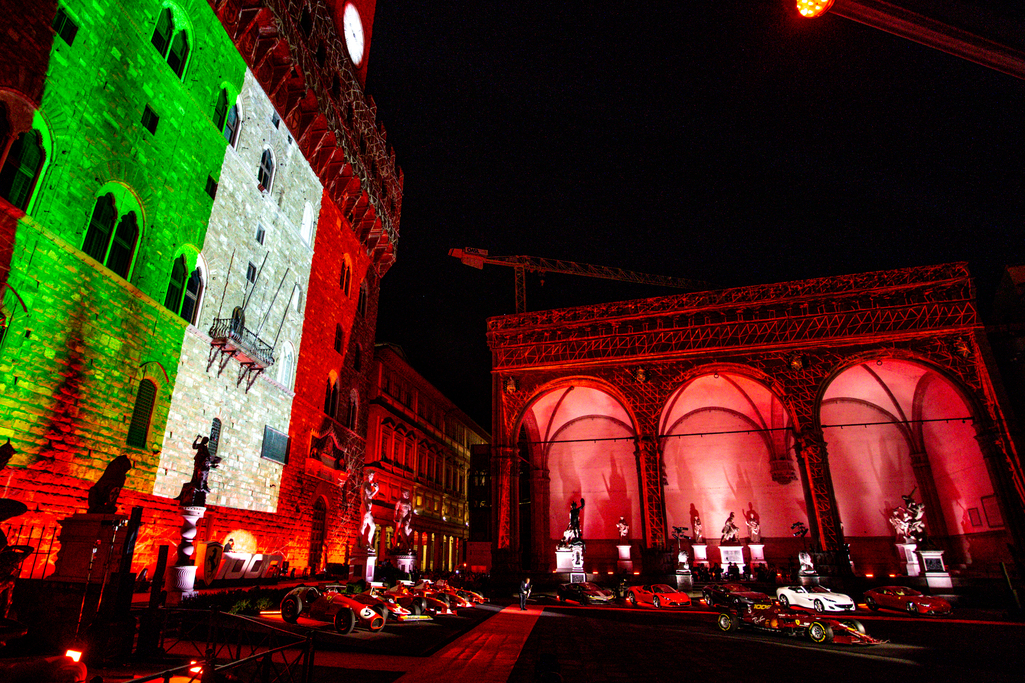 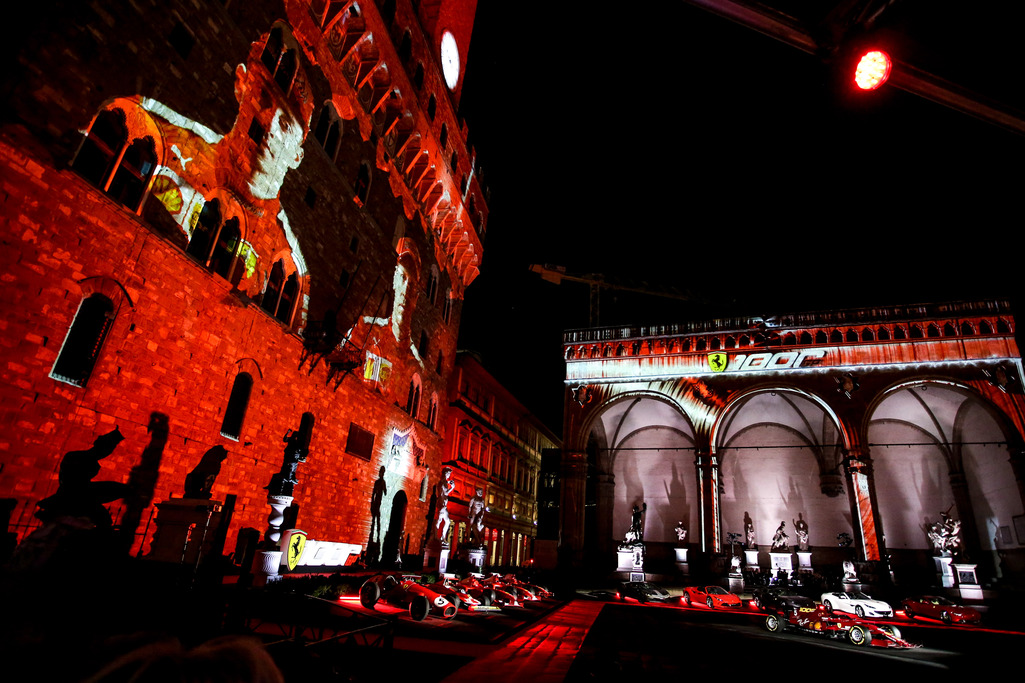 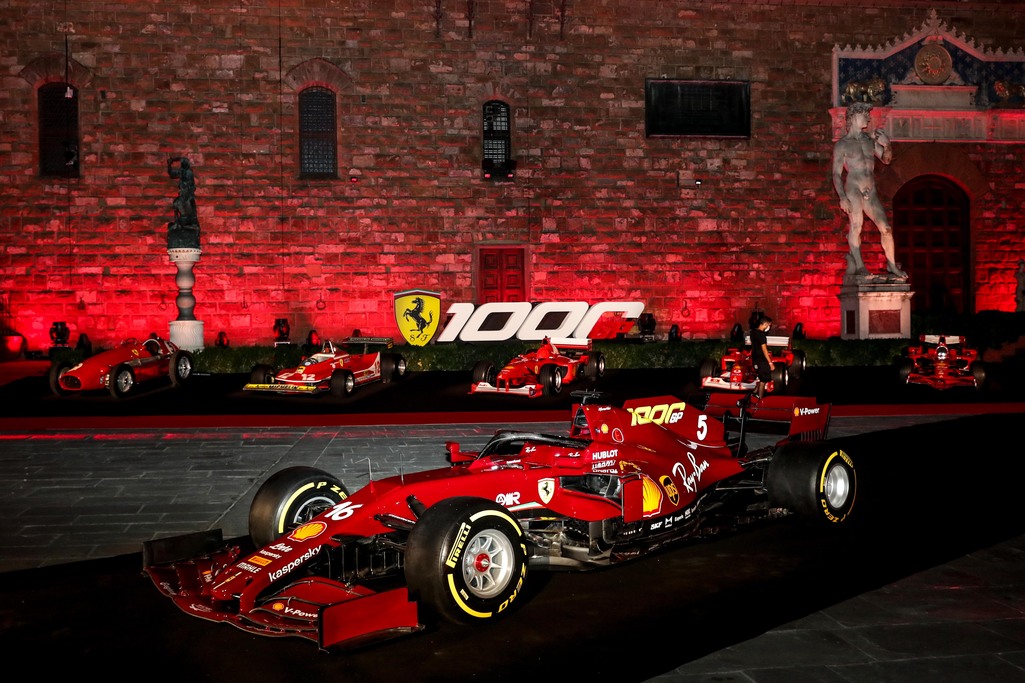 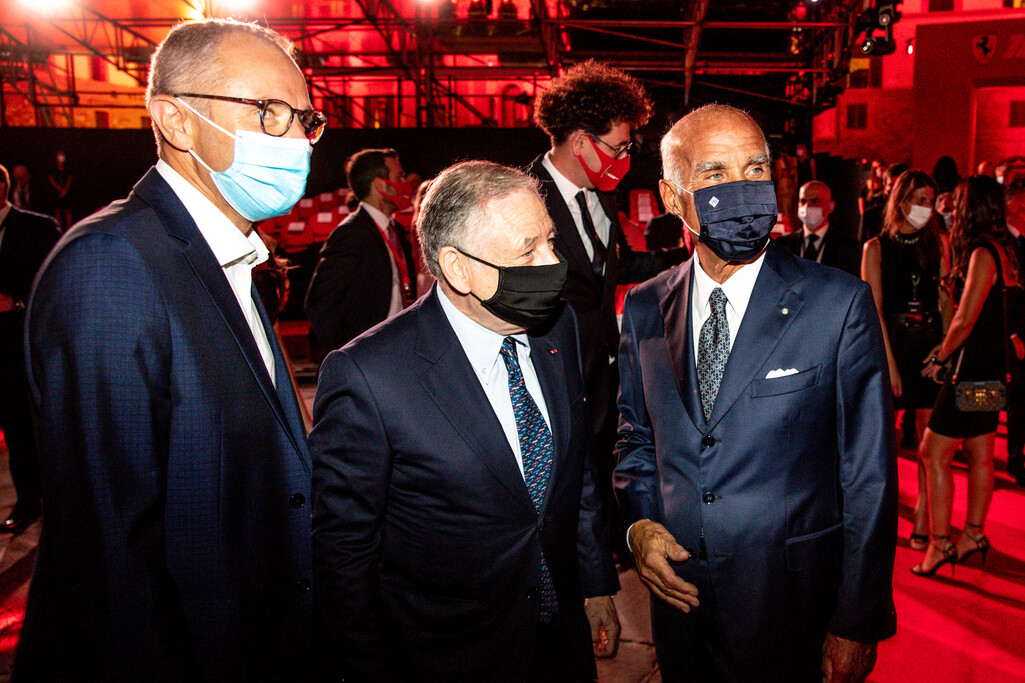 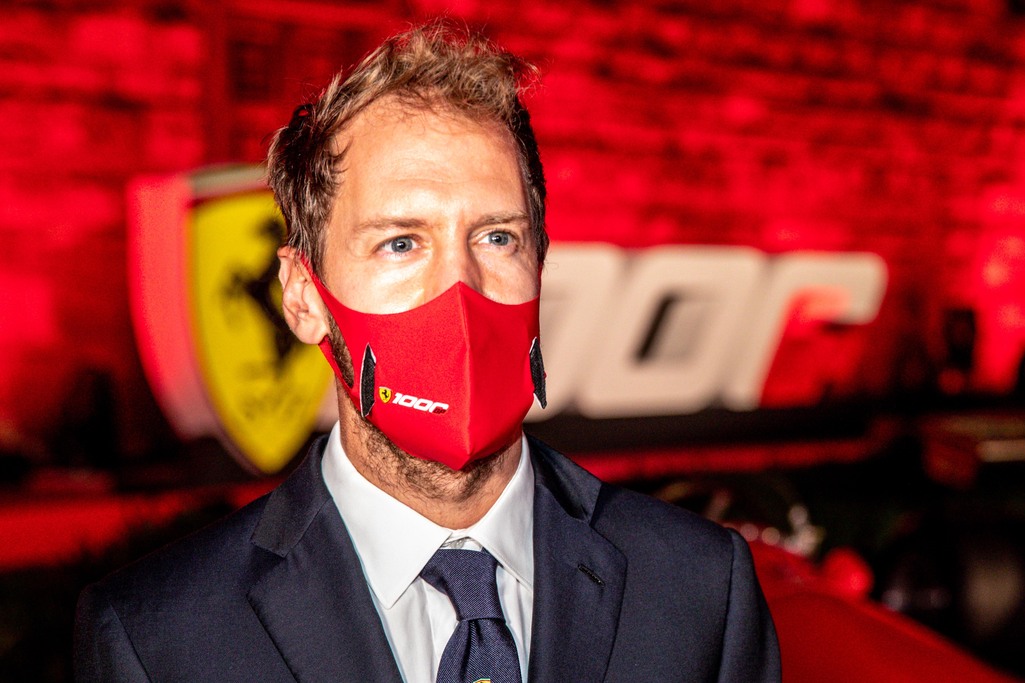 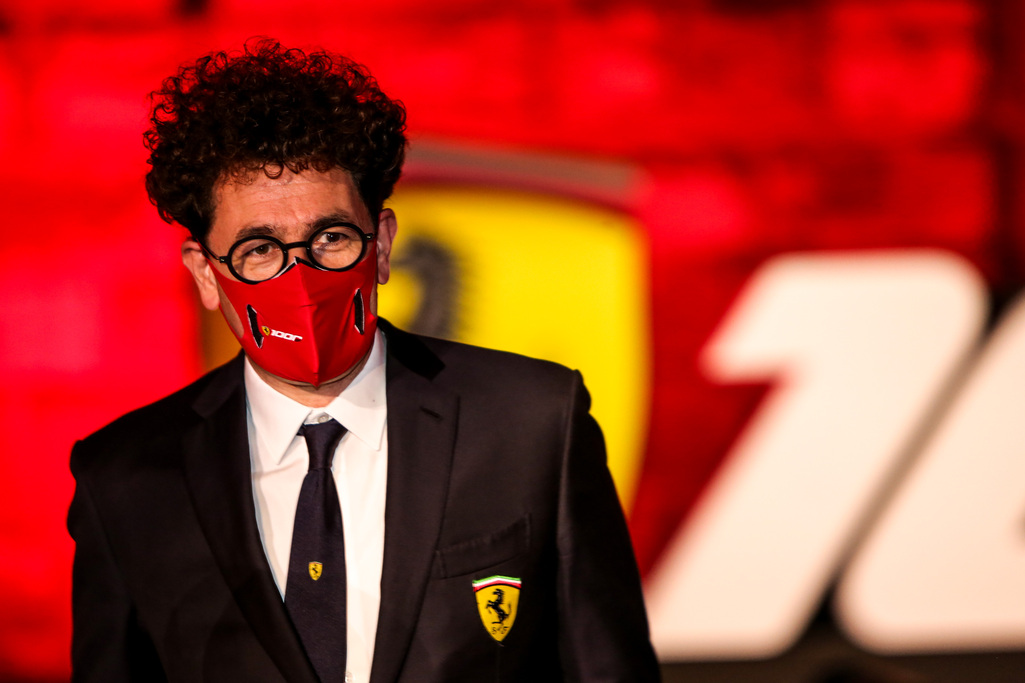 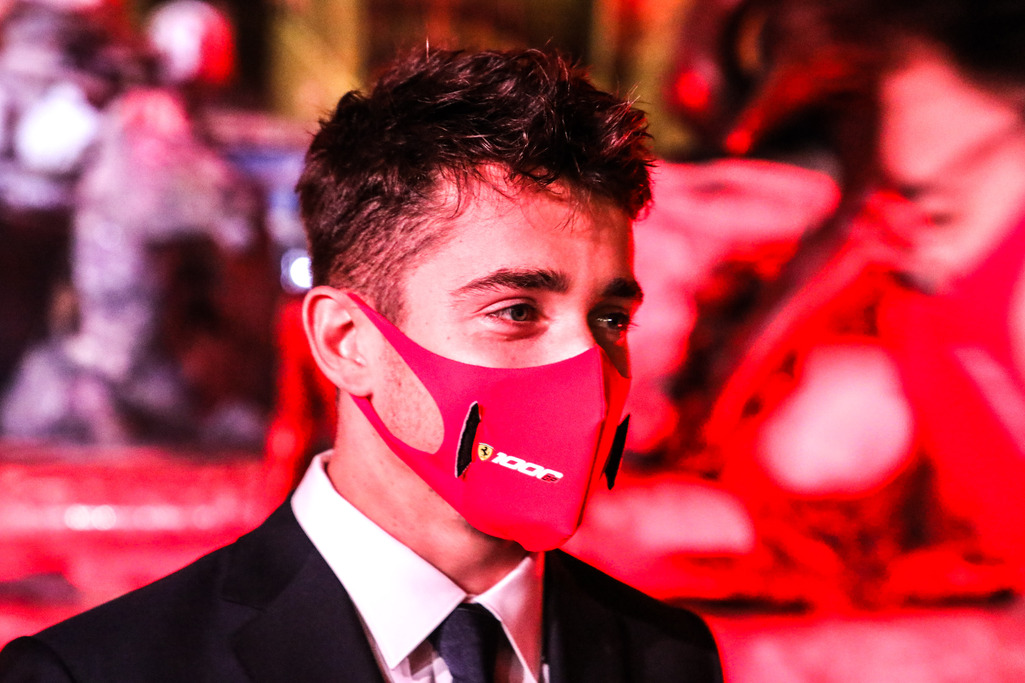 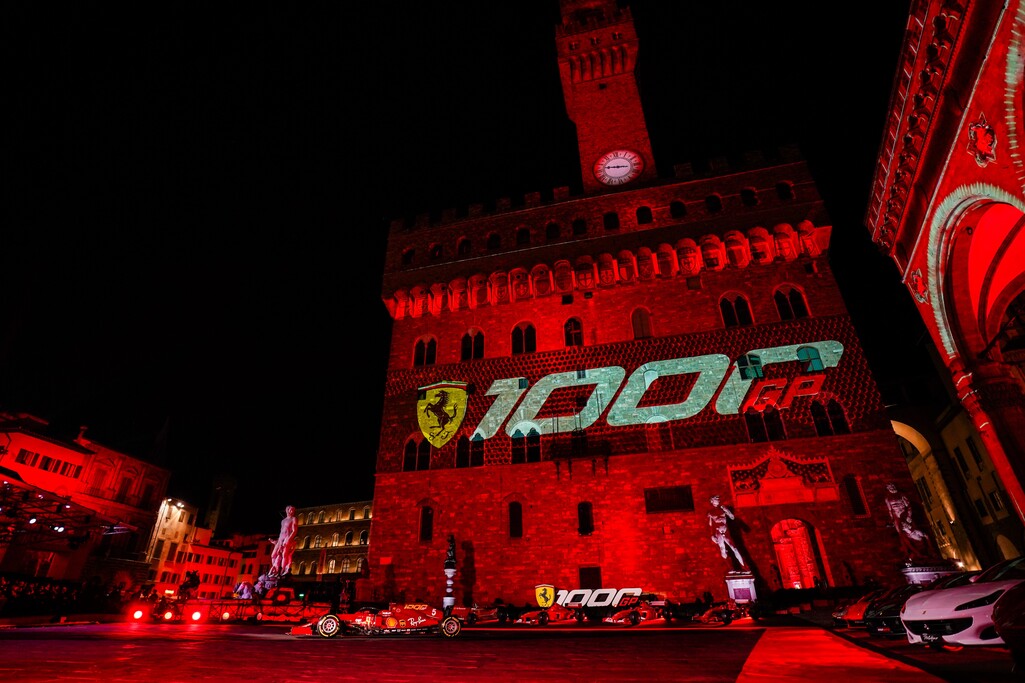 Florence’s Piazza della Signoria was the ideal setting on Saturday evening to celebrate Ferrari’s 1000th Formula 1 Grand Prix. The Maranello marque invited several of the sport’s key people to a special evening in this most beautiful setting in the capital of Tuscany so as to allow the current social distancing requirements of the Covid-19 pandemic to be respected. Indeed, this was the reason why staging a public event like the one in Piazza Duomo, Milan last year, which attracted thousands of fans, was not possible.

Show. The evening began at sunset when the square started to come alive. There was a spectacular display of Formula 1 cars from various eras, including the F2008, the F2002, the F1-2000, the 1979 312 T4 and the 500 F2 which dominated the 1952 and 1953 seasons, and a few Ferrari road cars from the current range, including the SF90 Stradale, F8 Tributo Spider, 812 GTS, Portofino and Roma. On display in the middle of the square was a replica of the burgundy coloured Ferrari SF1000 taking part in the Tuscan – Ferrari 1000 Grand Prix at the Mugello circuit this weekend. Shortly after 9 pm, the facades of Palazzo Vecchio and the Loggia dei Lanzi, which overlook Piazza della Signoria, came to life, illuminated by some of the most iconic images of Scuderia Ferrari from its 999 Grands Prix so far, from the early days and the exploits of the great Italian drivers, such as Alberto Ascari, Piero Taruffi and Luigi Musso, to the most successful era, featuring the trio of Michael Schumacher, Jean Todt and Ross Brawn, to the present day, not forgetting other great Ferrari champions, such as John Surtees, Niki Lauda and Jody Scheckter. Accompanying these images was the evocative flute playing of Andrea Griminelli.

Greeting. At the end of the show, the evening continued with a gala dinner in the Salone dei Cinquecento in Palazzo Vecchio, where President Elkann took to the stage to welcome everyone:

We celebrate an exceptional number that brings with it others: we are the only team that has taken part in every year of the F1 World Championship since 1950.

The team has no equal in terms of its success, with 16 constructors’ titles, 15 drivers’ titles and 238 race wins, a rate of almost one in every four races,” he began. “And we are fortunate to be able to do so at our own Mugello track, as it hosts a Formula 1 Grand Prix for the very first time.” The president then thanked all Ferrari personnel: “I take this opportunity to emphasise the contribution of everyone, the mechanics and engineers, as well as all those who do not work at the race track, but who work with the same passion every day in every area, from design to car production, logistics, safety and every other department of Scuderia Ferrari.”

Future. Elkann then looked to the future: “As we celebrate our first thousand races, we are already looking ahead, already thinking about the next thousand. We are proud to be part of this new Formula 1, a decision confirmed a few days ago thanks to the signing of the Concorde Agreement because we believe in the will of those who manage our sport and want to make it bigger and more spectacular while preserving its DNA.” He then had a thought for the “Tifosi”: “Without a doubt, the support the Scuderia gets from fans all around the world is truly special. Of course, now they are disappointed, and they let us know it. But it is them we think of first when we go racing, because, as our founder said, Ferrari is made first and foremost of this, of its people, and the fans are an integral part of the team. This has been a difficult season so far,” concluded Elkann. “But I know that we have the right people, in terms of skills, competence and passion that will allow us to win again. I am absolutely certain of one thing, that in the next one thousand Grands Prix we will win more races than we have to date.”

Tomorrow on track. The celebrations for Ferrari’s 1000th Formula 1 Grand Prix continue tomorrow at Mugello with a very special tribute. Shortly before 2 pm, the most successful car in the history of the Prancing Horse, the F2004 that Michael drove in his last championship-winning year, will be fired up and the noise of its V10 engine will ring out with Mick Schumacher at the wheel. Mick is currently racing in Formula 2 and leads the championship. He will do a few laps of the track, which is bound to delight the three thousand or so fans that have been admitted to the grandstands, the very first time this season that spectators have been allowed to attend a race.