Harley-Davidson maintenance: the whats and hows of motorcycle brakes

There are dozens of motorcycles capable of sub-three-second 0-60 times and most manufacturers have at least one model that tops 200 mph. These are lightweight supersport beasts with engines and chassis stripped directly from one-off racing spec bikes. Even bigger cruisers weighing twice as much have respectable acceleration and most will outdo even the fastest cars.

Bikes like the Triumph Rocket III, Ducati Diavel and the V-Rod from Harley-Davidson are some mouth-watering names. If you’re a sucker for speed that also enjoys a plush ride spiked with some serious style, then the whole current Harley-Davidson lineup will bring you to close-to-illegal road speeds in less than five seconds.

Bringing all that raw power to a controlled stop is just as important. Brakes are the most critical safety component on any vehicle, and on bikes, they’re literal lifesavers. This means faster response times and the shortest and safest braking distances. You’ll be using both front and rear brakes to gradually reduce speed, adjust to changing road conditions, or ease into turns.

Spongy brakes won’t help as they lack feel and compromise braking ability. The same applies with soft brakes with little feedback regardless of how far down you’re on the back brake pedal, or hard on the lever with the front brake. Hence, it’s recommended to replace a soft front brake on Harley Davidson before more serious issues arise.

Drums or Discs? Which Is Better? 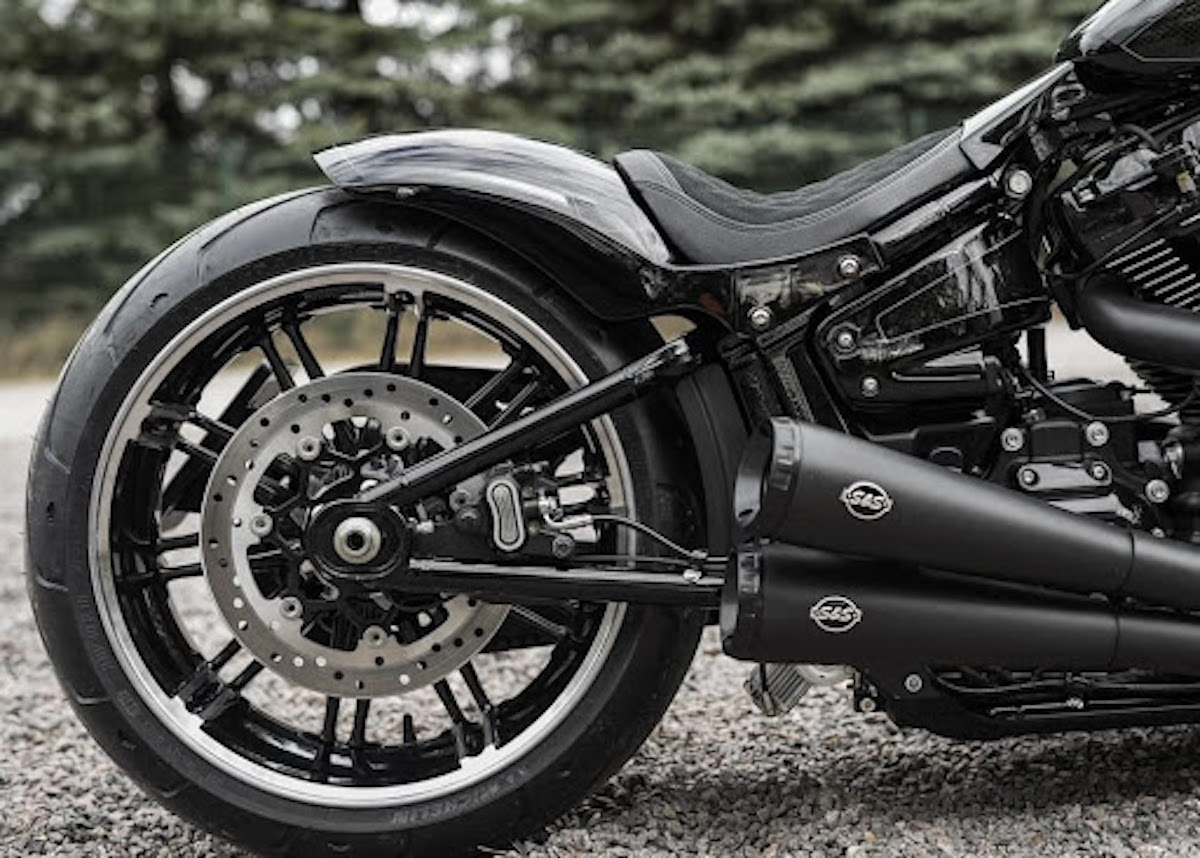 Bikes transitioned from drums to discs in the 1970s. All major manufacturers have discs up front and back, and only smaller-engined beginner bikes may have a rear drum brake to cut down on costs. Discs have faster actuation, more stopping power, and won’t get as hot. The benefits are that they better handle the extra weight of bigger bikes like cruisers and tourers and all the added horses to get to the speeds mentioned above. In addition, there’s lower friction with the wheels, so handling is significantly improved.

Disc brakes on motorbikes use callipers to push brake pads against rotors (or discs) to create friction. Rotors and callipers are either of the floating or fixed type, meaning much better cooling and prevent warping and transferring the heat from braking to the hubs when compared to drums.

Callipers are the housings overhanging the rotors and contain one or more pistons. Pistons are what engage the brake pads to push against the rotors. This is done hydraulically, with braking fluid from brake lines feeding on a master cylinder. Callipers can consist of two preassembled halves bolted together in one unit in more affordable variants, or monoblocs machined from a single piece of metal. The latter exhibit less flex and perform better under hard braking, but manufacturing costs and the use of exotic metals like titanium mean significantly higher costs.

Pads are the parts inside the braking assembly that push against the discs. They consist of a high friction material that is abrasive resistant and needs to convert the kinetic energy of a moving bike into heat to get to a stop. Worn pads are a precursor to loss of braking feel, leading to spongy and soft brakes.

Lining materials and those that make contact with the rotor differ. Organic pads consisting of rubber, glass or carbon are bound together by a heat-resistant resin. The mixture provides a good braking feel but suffers from advanced wear and high heat.

Slightly more expensive are the sintered brake pads made of layered metals. They have exceptional braking force in a mix of road and weather conditions and are the preferred pad type for bigger bikes. There’s less heat buildup and less wear. The downside is that they aren’t gentle on the discs and are noisier than organic pads.

Possibly the best compromise is semi-sintered pads. They are known for low wear and rotor friction, better high-temperature performance than organic pads, and less noise than sintered brake pads.

Depending on composition, size, and brand, pads will last up to 15000 miles in more spirited riding. 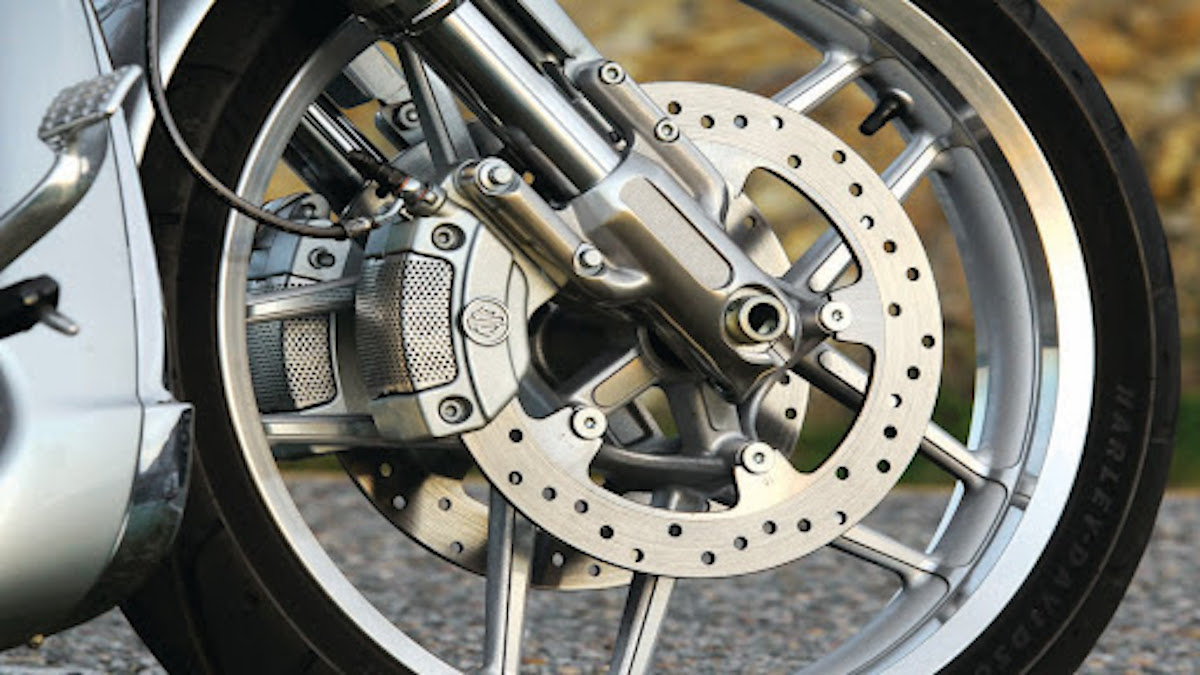 This is the housing containing the brake fluid and works by creating hydraulic pressure each time you pull the brake lever. The size of the cylinder should be proportionate to the bike and the rest of the brake assembly. Cylinders are sourced for each brake separately, and riders can find rebuild kits for older Harleys when updating to bigger discs.

Brake fluid is what creates the pressure between the callipers and rotors to bring the bike to stop. It also lubricates the whole system, so extends the longevity of parts. Brake fluid needs to withstand high temperatures, be non-corrosive and have low viscosity (or DOT classifications). The DOT class (3,4, 5 and 5.1) is printed on the master cylinder. So, when changing fluid (recommended every 2 years), or bleeding the system for better brake feel in a soft front brake Harley Davidson, refer to the DOT classification. For instance, the newest 5.1 is compatible with the ABS systems on newer Harley bikes, whereas DOT 5 fluid is not.

Braking on older Harleys is significantly improved by changing out worn rubber brake lines with newer steel-braided variants. These will more than handle the increase of brake fluid pressure in more aggressive braking and stand up to corrosion, liquid and road spray that much better. An additional benefit is that they are offered in various finishes to suit different tastes and bikes.

Issues with braking performance relate to defective parts. Spongy or soft brakes are a result of low brake fluid levels or air in the system. Check for damage in the brake lines, and the amount of fluid, and bleed the system if necessary. In addition, worn pads mean dangerously long braking distances or uneven braking between the front and back wheels. Noisier than usual braking also points to loose or worn pads. Rotors should last at least 50000 miles and are some of the last

parts to wear down. Nevertheless, visible damage means they need to go. Other parts to check are the seals and pistons in callipers if you suspect rust or leaking fluid.

Upgrades to the existing brakes in your Harley-Davidson are in line with the newer options on the market. This includes multi-piston fixed callipers, long-lasting pads with more bite and steel braided brake lines. Adding a master cylinder with a larger piston will put out more pressure. All parts are aftermarket and should be sourced from respected brands and specialist Harley suppliers.

Harley was late to the ABS party, but this has significantly improved brake force distribution and works wonders in wet conditions. Riders have higher grip levels, improved handling and cornering and less wheel spin. Also new is the addition of Cornering Enhanced ABS (C-ABS) when braking into turns and this features in the newest tourers and cruisers. Loss of grip at the back wheel in the wet is handled with Harley’s Drag-Torque Slip Control (DTSC) and bigger bikes benefit from Vehicle Hold Control (VHC) when at a standstill on an incline. All systems reduce the needed rider input for safe braking in various road and riding conditions.