Thanks to a chance meeting with Max Mosley on an international flight to the South African GP in 1975, I became the circuit manager some five years later. Kyalami was, without doubt, one of the most popular tracks on the Formula 1 calendar, and I was looking forward to my first GP in the role. It was scheduled for February 7th 1981. Little did I know what was in store!

The build-up to that Nashua sponsored South African Grand Prix was marred by F1 politics, a battle royale between Bernie Ecclestone (FOCA) and Jean-Marie Balestre (FISA). It came as a real blow when we were eventually advised that the FISA Teams, namely Ferrari, Renault, Alfa Romeo, Talbot Ligier, and Osella, were ordered by FISA not to fly to Kyalami.

Planning a Grand Prix is challenging at any time; this thunderbolt heralded a significant problem for us. However, following many threats and counter-threats, it was eventually decided that the race would go ahead, but with a grid of just 19 Ford Cosworth-powered cars. It seemed surreal that the famous red cars from Maranello would not be amongst those racing in front of a passionate South African crowd that year.

I’d organised a special event on the morning of the GP for the tens of thousands of spectators who’d arrived from all over South Africa in the days leading up to the race. In those days, spectators drove their cars, bakkies, trucks, caravans and motorhomes right up the track’s perimeter fencing, creating extraordinary viewing, sleeping and eating edifices out of scaffolding, timber and anything else to hand. Alcohol flowed freely from the time of arrival, that was for sure, and by the time GP morning arrived, the crowd was very eager for action. 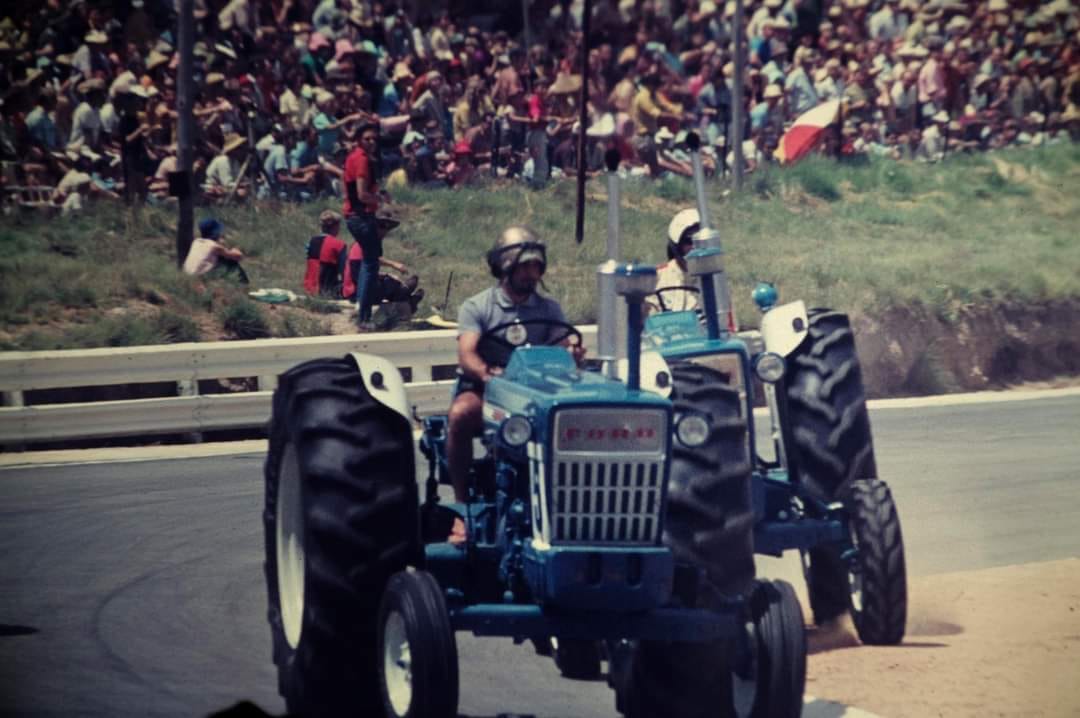 The event that I had put together as entertainment for the spectators on Grand Prix morning comprised a tractor race, two laps of the entire GP circuit. Hopefully, it would raise money for a leading charity whilst keeping the sun-soaked, alcohol-filled fans happy before the primary race. I had concluded a sponsorship deal for the supply of 24 tractors with German manufacturer DEUTZ. We had 8 x F1 drivers, James Hunt, the cast of a SABCTV soap opera, The Villagers, and some other celebrities.

The tractor race was won by the recently-deceased Argentinian legend Carlos Reutemann, who then repeated the feat in a somewhat quicker Saudia Williams F1 car that afternoon. Unfortunately for Carlos, the GP has subsequently declared a non-World Championship race, so no points were awarded.

The event that I had put together as entertainment for the spectators on Grand Prix morning comprised a tractor race, 2 laps of the full GP circuit.

This also proved a great shame for the highly talented South African racer Desirḗ Wilson, as I had acquired another sponsorship from DEUTZ, enabling her to drive for Ken Tyrell in what would have been her F1 World Championship debut. Life can be ruthless.

James Hunt failed to turn up for the tractor race but sent me an excellent letter that I still have, apologising profusely. It begins, “Dear Brian, I write to you with my tail firmly between my legs…”
I was lucky to say that I competed in the last ever international race to be held on that fabulous Kyalami Grand Prix Circuit, which was partly demolished in 1987. It was the Yellow Pages 500 International Group C race. It provided a series of extraordinary memories for me, competing in the same race as the likes of Jochen Mass, Derek Bell, Jacky Ickx, and many other F1 heroes.

The story of Brian’s, fascinating, colourful and highly-entertaining 45-year career in Formula 1
and international motorsport is told in his recently published auto-biography:
You don’t have to be a Champion to be a Winner!
It can be purchased on Amazon or via his website www.brian-sims.com
Credits:
Brian Sims
Categories
ColumnsMoney, Egos & Speed
Tagged
carlos ReutemannJames HuntKyalamisouth african gp