Lewis celebrates the championships with his colleagues at Petronas

Lewis Hamilton came to Kuala Lumpur today to thank the Petronas family for their continuous support throughout the season. The Title Partner of Mercedes AMG Petronas Motorsport played a crucial role in this year’s historic success of the Silver Arrows.

Before being officially crowned the 2017 FIA Formula One Drivers’ World Champion at the FIA prizegiving ceremony in Versailles next week, Lewis headed to Malaysia today to celebrate the fourth consecutive double championship for the Silver Arrows with the team’s title partner PETRONAS.

Lewis got on the plane to Kuala Lumpur immediately after wrapping up the final tests of the year in Abu Dhabi. Upon arriving at the foyer of the spectacular PETRONAS Twin Towers, the headquarters of the fully integrated oil and gas multinational, the 2017 FIA Formula One World Champion-elect was welcomed by thousands of employees and fans, cheering and chanting his name.

“It’s great to be here in Kuala Lumpur,” Lewis told the celebration crowd. “We wanted to come out here to celebrate with PETRONAS who have been so influential; they’re such huge contributors to us achieving these four titles. So after the last race and the test yesterday we flew straight out here to celebrate with the PETRONAS family. Reliability is a key player in our sport, the engine is really the heart of the car and the fluid that runs through it is what PETRONAS provide. I finished every single lap this year thanks to you guys, and that’s what helped me win this title. Thank you so much!” 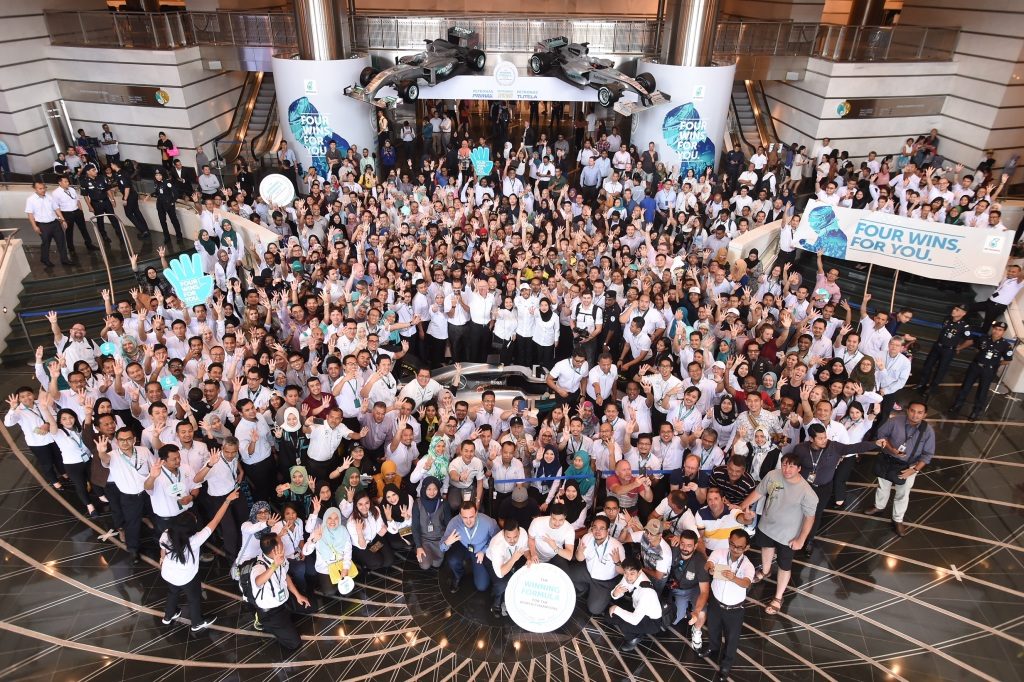 Lewis then went on to thank the crowd for the reception: “Today was the warmest welcome I’ve ever had here in Malaysia. Every year we come we always get a warm reception, but today’s one was just on another level – I was not expecting this. I thought I was coming to the press conference when all of the sudden I see a sea of people and a lot of great support. It meant a lot and it was quite emotional to see it all!”

“After the race in Mexico a lot of people asked me how it feels to win this title,” Lewis explained. “We’re the first team in the history of Formula One to defend the title over a regulation change. But nobody does it alone. The great board members in Stuttgart who support us with 100 per cent commitment. And the team, in which all of you play such an important role. Without your energy, power and commitment we could not have achieved what we have done these past four years. So now it’s time to celebrate together!”

Noor Afiza Mohd Yusof, General Manager, Brand Management, Group Strategic Communications PETRONAS, said: “Winning our fourth consecutive World Constructors’ Championship is a huge milestone for PETRONAS and a clear testament towards the successful partnership we share with Mercedes. Not only did we redefine track domination, but this win has elevated the PETRONAS brand on par if not better against other oil and gas companies currently competing in the sport. More importantly, we consider this a Malaysian win, one that can be used as a benchmark for us to pursue bigger and greater goals.”