Mercedes-AMG Petronas Motorsport is delighted to announce a new partnership with NetJets, the worldwide leader in private aviation.

With an expanding race calendar and resulting in greater travel burden on both race drivers and team members, the Team has made it a major focus to optimise travel times and improve the efficiency of its logistics as much as possible.

For example, the ‘triple header’ of three consecutive race weekends planned for the 2018 season will present the Team with new logistical challenges. The prospect of gaining back working hours at the factory that would otherwise be spent travelling is a particularly valuable prospect.

“Over the past season, we have been working to optimise every area of our team operations and that includes how we best manage the challenges of race travel,” explained Toto Wolff, Head of Mercedes-Benz Motorsport.

“People will automatically think that private aviation means luxury lifestyle – but it has been common practice in Formula One for some time and will provide us with valuable time savings that can then be invested in finding more performance.

“We know that these extra hours can make the difference and also keep the team fresher and fitter as the season goes on. I am delighted that we have been able to transform this work into a partnership with a market leader like NetJets.”

To mark the new partnership, Valtteri Bottas took his first journey with NetJets from Nice to Budapest on a Phenom 300 ahead of last weekend’s Hungarian Grand Prix – and took our camera along for the ride.

“We share a special kinship with motorsports professionals who thrive at the intersection of speed, safety and innovation,” commented NetJets Executive Vice President of Sales & Marketing, Patrick Gallagher.

“We’ve always had a keen interest in Formula One racing, and Mercedes-AMG Petronas Motorsport is the pinnacle of that. NetJets gives the drivers and team engineers a competitive edge by giving them faster access to tracks like Baku and Spa, at a fraction of the cost of whole aircraft ownership. That’s a big plus in an industry where speed and efficiency matter.” 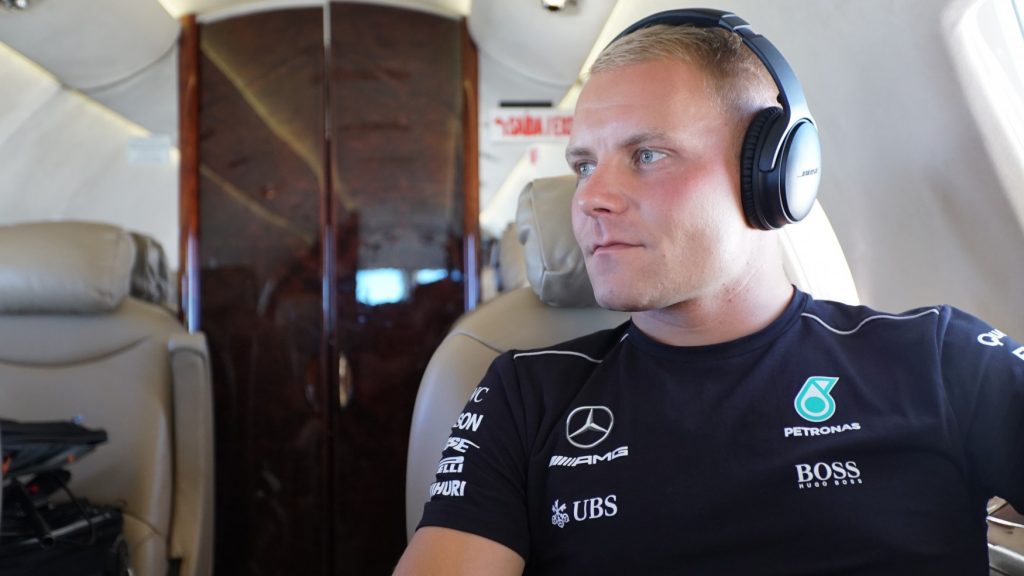 NetJets Inc., a Berkshire Hathaway company, is the worldwide leader in private aviation with the largest and most diverse private jet fleet in the world. NetJets celebrated its 50th Anniversary in 2014, having been established in 1964 as the world’s first private jet charter and management company. In 1986, NetJets pioneered the concept of fractional aircraft ownership – offering individuals and businesses all the benefits of whole aircraft ownership and more, at a fraction of the cost. Today, NetJets offers a full range of private aviation solutions, including fractional ownership, leasing, and jet cards through businesses bearing the NetJets®, Executive Jet Management®, and Marquis Jet Card® service brands in North America and Europe.