Miami Grand Prix is added to the 2022 F1 calendar

Formula 1 is heading back to Florida, with the news that the brand-new Miami Grand Prix will join the F1 calendar in 2022.

The race – set to be the first since 1959 in the US state – will be held on an exciting new layout at the Hard Rock Stadium complex in Miami Gardens, home to the NFL’s famous Miami Dolphins franchise.

Although the exact date of the race has yet to be confirmed, F1 president Stefano Domenicali said he expects the first race in a 10-year deal to take place in the second quarter of 2022.

The circuit itself will be 5.41km and will feature 19 corners, three straights and potential for three DRS zones, with an estimated top speed of 320km/h. Hard Rock Stadium – a multi-purpose sports and entertainment hub that has hosted six Super Bowls, two Baseball World Series and numerous rock concerts – will sit at the heart of the track, which has been designed to encourage close racing while meeting the highest safety standards.

We are thrilled to announce that Formula 1 will be racing in Miami beginning in 2022!

Miami will be the 11th location Formula 1 has raced at in the United States since the Championship began in 1950, following Indianapolis, Sebring, Riverside, Watkins Glen, Long Beach, Las Vegas, Detroit, Dallas, Phoenix and Circuit of The Americas in Austin.

The race will provide an additional tourist boost and economic impact to local businesses in the greater Miami region and Formula 1 and the promoter will be working closely with the local community to ensure an allotment of discounted tickets for Miami Gardens residents, ensuring they have the opportunity to experience the thrill of the sport. 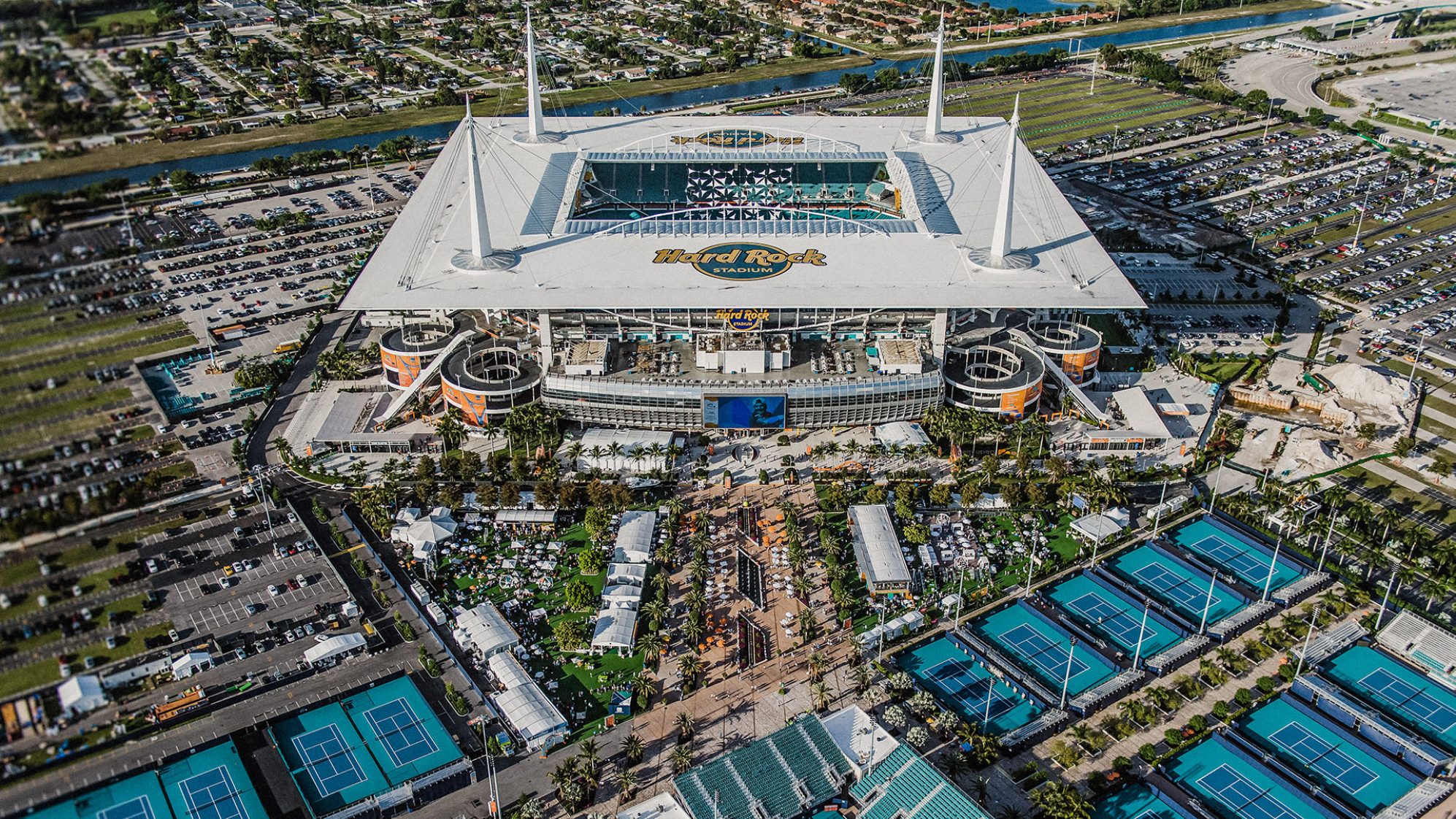 “The USA is a key growth market for us, and we are greatly encouraged by our growing reach in the US which will be further supported by this exciting second race. We will be working closely with the team from Hard Rock Stadium and the FIA to ensure the circuit delivers exciting racing but also leaves a positive and lasting contribution to the people in the local community.”

“We are grateful to our fans, the Miami Gardens elected officials and the local tourism industry for their patience and support throughout this process. We are looking forward to bringing the greatest racing spectacle on the planet to Miami for the first time in our sport’s history.”

“The Hard Rock Stadium entertainment campus in Miami Gardens exists to host the biggest global events to benefit the entire greater Miami region and Formula 1 racing is as big as it gets.

“We have worked with specialist designers to create a racetrack that we, Formula 1 and the FIA believe will provide great racing and we hope to create best-in-class unique fan experiences that are reflective of the diverse and dynamic nature of Miami.

“I want to thank Formula 1 and the Miami Gardens and Miami Dade County elected officials for working to bring this hugely impactful event here for years to come.”

“It’s always interesting to go to a new place where we’ve never driven before and Miami is a great city. I’m sure if they build a good track, we can have a lot of fun out there and hopefully, we’ll bring a lot of excitement so the fans can of course enjoy the race. I’m always happy to be in America, it gives you that kind of feeling that anything is possible, so I’m just excited to go there.”

“Racing in the US is always great fun and I enjoy a city circuit, it’s a good challenge. I think Miami is a great location for Formula One, it’s a very fun city and there’s lots of energy in that place. The Latino community is pretty big there, so I’m definitely looking forward to going there soon. I think Miami and F1 is the perfect combination.” 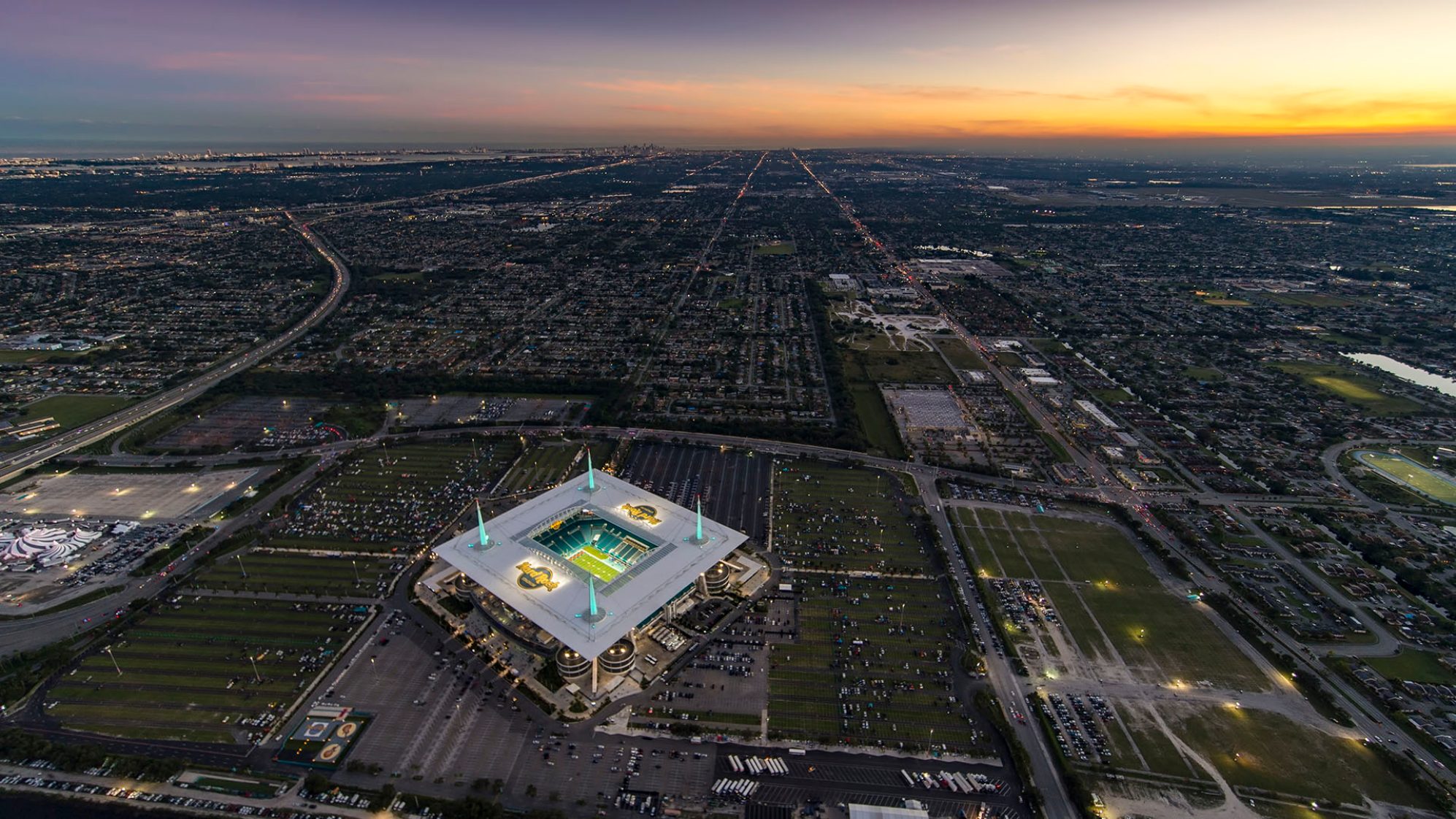 Miami and sport are synonymous. Name a major American sport and Miami have got a team. The Florida city is home to National Football League outfit the Miami Dolphins whose home ground – the Hard Rock Stadium – will be circumnavigated by F1’s newest Grand Prix track.

You’ve also got the National Basketball Association’s Miami Heat in town, along with Major League Baseball’s Miami Marlins and Major League Soccer’s Inter Miami, part-owned of course by football legend David Beckham. And to complete the quintet of major sports teams, there’s the National Hockey League’s Florida Panthers, who play in nearby Sunrise.

But that’s not all. There’s an international sport, too. The Miami Open, one of the biggest tournaments on the tennis calendar and lower only in prestige than a Grand Slam, takes place in the Hard Rock tennis centre next door to the Dolphins’ stadium, which has previously hosted NFL’s showpiece event – the Super Bowl, of course.

And then there’s the love for all things motorsport with America’s premier stock car series Nascar has a round at the Homestead-Miami Speedway, while the national single-seater series Indycar used to race in the city.

F1, then, will be extending a proud sporting legacy when it hits the Sunshine State next year for the first race in a 10-year deal.

After initially trialling circuit layouts in Downtown Miami in August 2017, the promoter, Formula 1 and Apex Circuit Design switched their attention to a site a few miles north two years later.

As well as site visits, the team spent several days on Google Earth, playing around with different combinations. It’s certainly not the work of a moment. Since work has begun on the project four years ago, Apex and F1 have created a staggering 75 layout variations across the various proposed sites.

Focusing on the current site, the team have simulated an impressive 36 different layouts, before landing on the current iteration – a 19-turn track that has the Hard Rock Stadium at its heart – and will have an average speed of around 223km/h or 138mph.

“You could walk around the top deck of the stadium and see every corner on the race track – and that’s pretty unique,” said Tom Garfinkel, Vice-Chairman, President & CEO, Hard Rock Stadium.

It’ll be a day race, though the session times will be adjusted to be sympathetic to the local area’s needs, such as working around the school runs on a Friday afternoon when practice takes place.

It’s a temporary circuit with a permanent feel 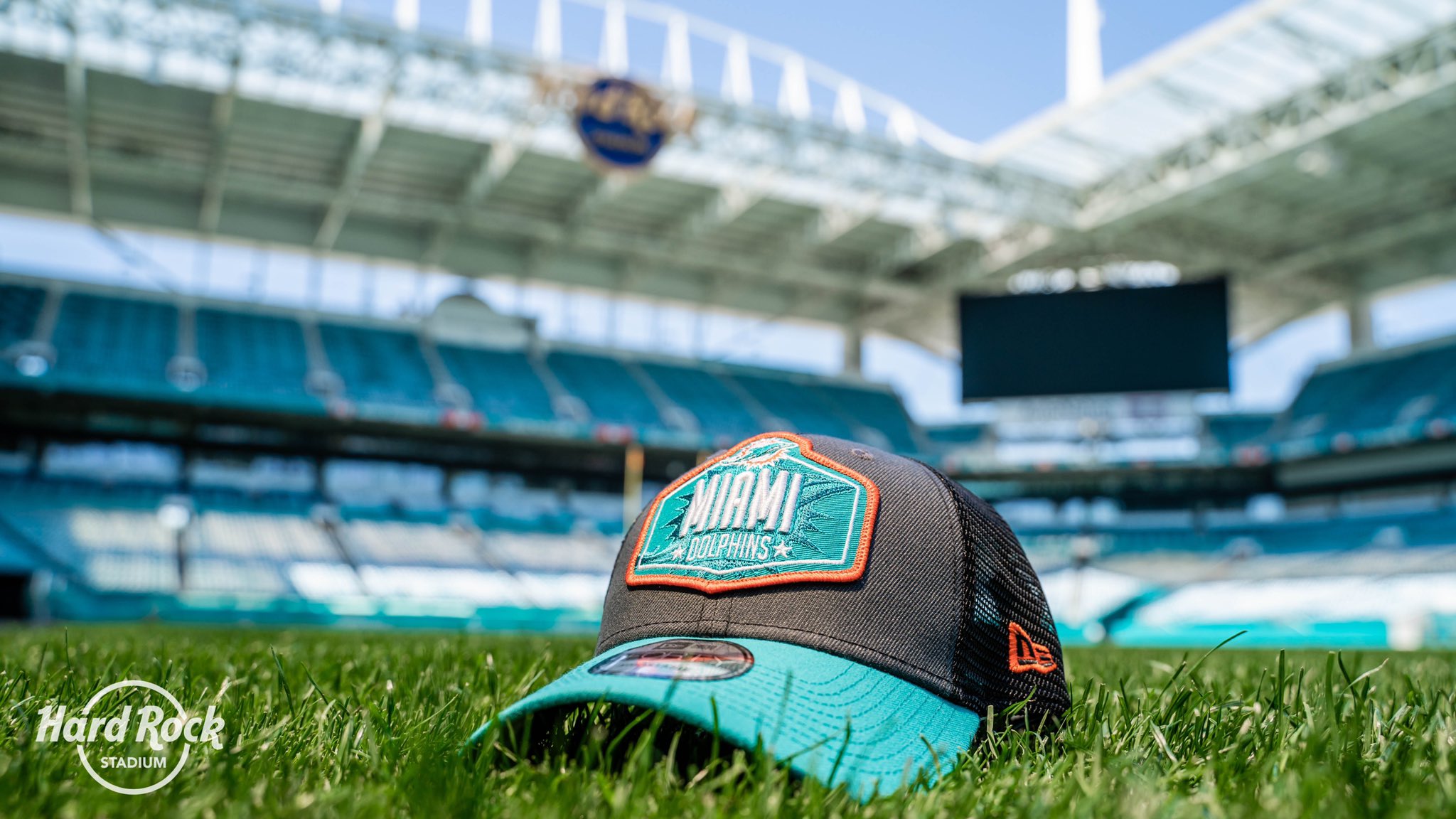 The track – which will have a top speed of around 320km/h or 198mph – will have a street circuit vibe, similar to Melbourne’s stunning Albert Park that hosts the Australian Grand Prix, as the site is used for other purposes during other times.

However, the layout will be more akin to a permanent circuit. It’s predominantly flat, but there are some small undulations to the land, which designers have integrated into the circuit.

The main elevation change can be found between Turns 13 and 16, with the track heading over an exit ramp and under various flyovers across uneven ground. For example, the Turn 14-15 chicane has an uphill approach, with a crest in the middle of the chicane and then drops down on the exit.

With the Hard Rock Stadium – which features a 12-cabin gondola cable car system, the first to be built at any stadium in the US no less – taking centre stage, organisers plan to use the venue for spectators and facilities, with later iterations of the design relocating the pits and paddock club complex directly adjacent to the north side of the stadium.

From Google Earth, the large car parks that fill up the proposed site might suggest the designers had free rein with the layout, but it was far from the case – instead, it has been skilfully woven into a site that has multiple uses.

“It is actually quite a restricted site to work on, both in terms of existing infrastructure and operationally,” said Craig Wilson, F1’s Head of Vehicle Performance who was heavily involved in the process. “There is a lot of underground drainage management that we had to mindful of given it is mainly flat land not far above the water level and the Dolphins were developing part of the site to house their new training complex.

“The south-east to south corner section is where the Miami Open tennis is held and houses all of their courts and infrastructure, plus a gondola system running above it, and the eastern section has a combination of Florida Highway on and off-ramps from the Florida Turnpike and some historical trees, both of which that we had to navigate around, which placed a heavy restriction in this area.

“Then there is the matter that there is a big stadium and all its infrastructure right in the middle of the site that has to operate during the NFL season.”

The circuit has been designed with spectacular racing in mind

As with all recent new layouts, overtaking opportunities have been at the forefront of designers’ minds when shaping the Miami track, with two key passing spots identified.

There is half a chance into Turn 1, too, as organisers plot a third, albeit shorter, DRS zone on the pit straight, which comes out of the fast Turn 19.

The location is an F1 first 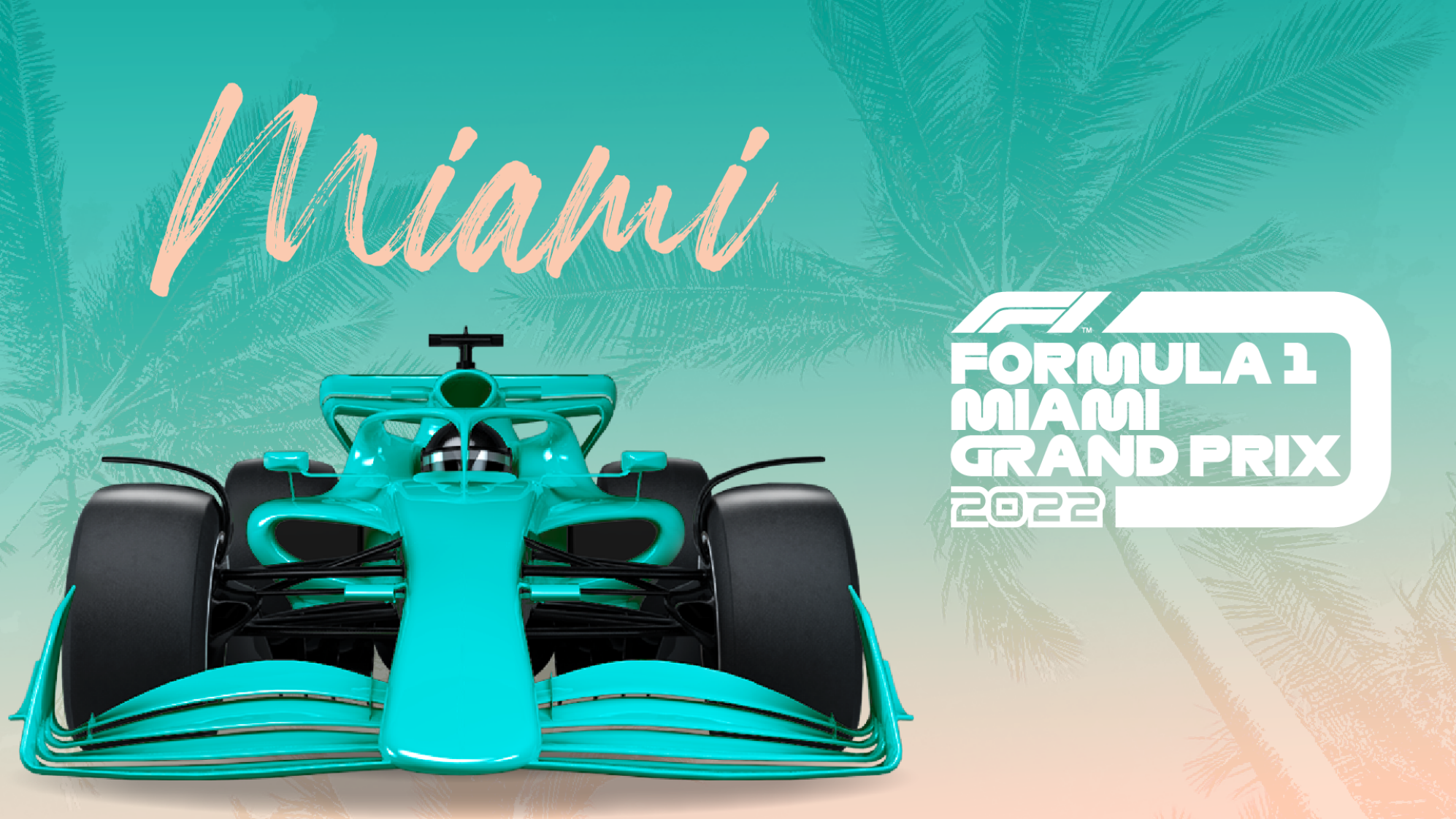 For the first time in F1’s long history, the championship will be hosted in a predominantly African-American community, in the city of Miami Gardens, a few miles north of Downtown Miami.

It’s a city that is on the up and is renowned for its small businesses and impressive food scene, particularly its soul-food and Caribbean restaurants.

With F1 coming to town it’s hoped that the business boom will continue, with 4,000 new jobs created for the community, according to the promoters, around 35,000 local hotel bookings and over $400m in a positive economic impact to the city each year.

That extra investment in the infrastructure, workforce and fabric of the African American community is just part of a push to improve equality – through the We Race As One initiative – around the world.

Miami is F1’s 11th different venue in the USA

No country has had as many F1 host venues as the USA.

The country held its first world championship round at Indianapolis in 1950, albeit under Indy 500 regulations, not F1.

F1 has since visited Sebring (also in Florida), Riverside in California, Watkins Glen in upstate New York, Long Beach in California, Las Vegas in Nevada, Detroit in Michigan, Dallas in Texas, Phoenix in Arizona, Indianapolis again (on a road circuit), and finally Austin in Texas.

But even with so much history, Miami is set to be one of a kind – a fresh and exciting new event with a dynamic all of its own.