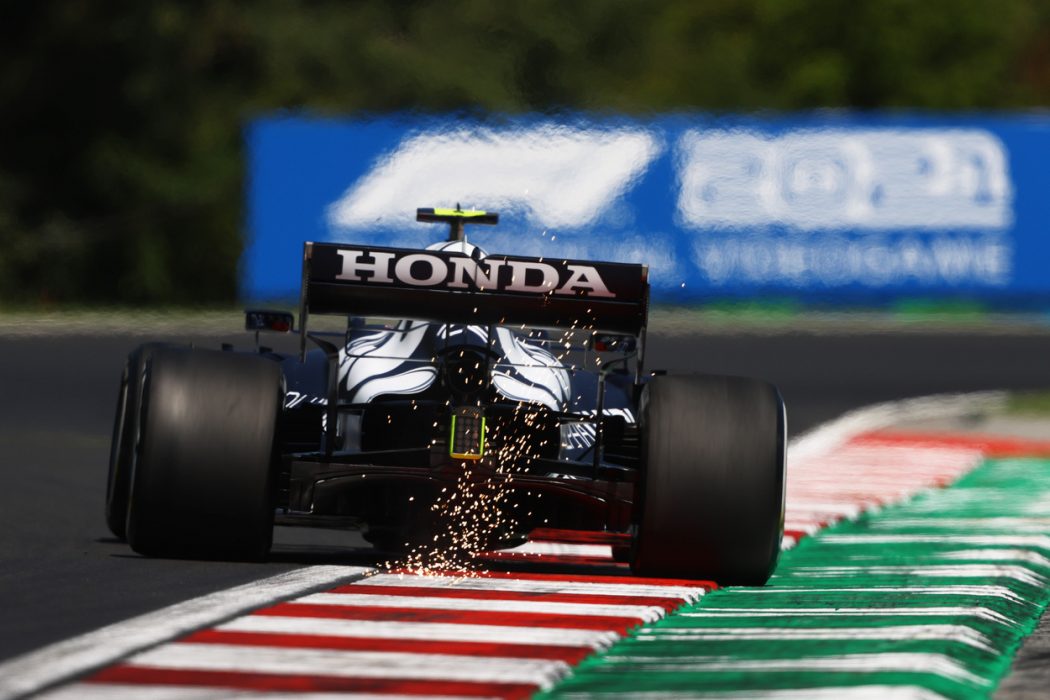 BUDAPEST, HUNGARY - JULY 30: Sparks fly behind Pierre Gasly of France driving the (10) Scuderia AlphaTauri AT02 Honda during practice ahead of the F1 Grand Prix of Hungary at Hungaroring on July 30, 2021 in Budapest, Hungary. (Photo by Bryn Lennon/Getty Images) // Getty Images / Red Bull Content Pool // SI202107300209 // Usage for editorial use only // 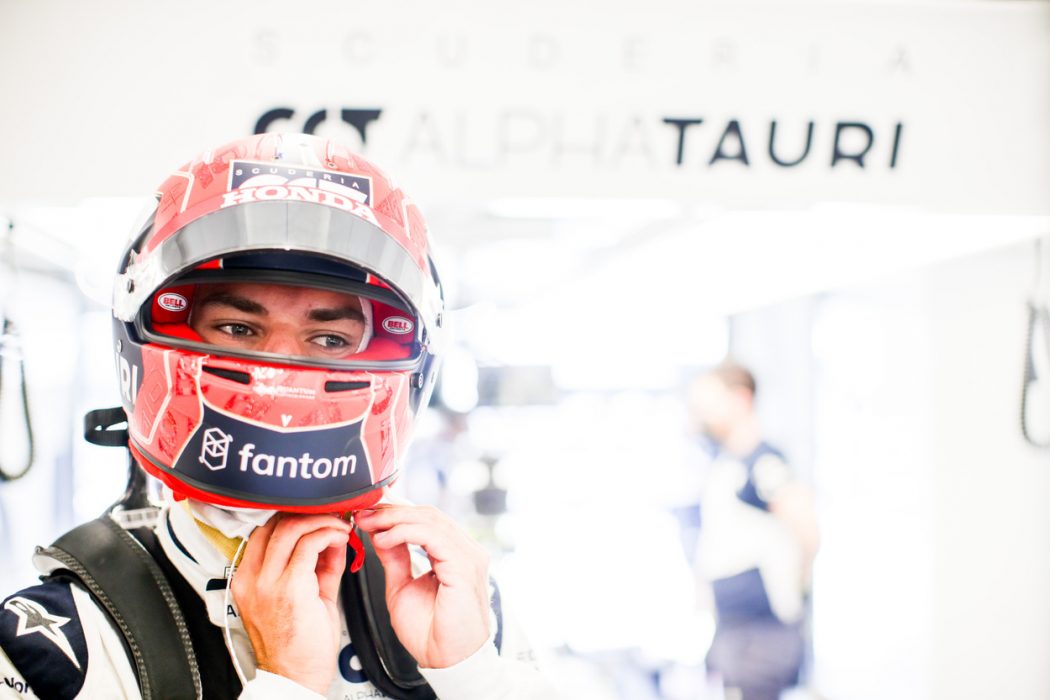 BUDAPEST, HUNGARY - JULY 30: Pierre Gasly of Scuderia AlphaTauri and France during practice ahead of the F1 Grand Prix of Hungary at Hungaroring on July 30, 2021 in Budapest, Hungary. (Photo by Peter Fox/Getty Images) // Getty Images / Red Bull Content Pool // SI202107300221 // Usage for editorial use only // 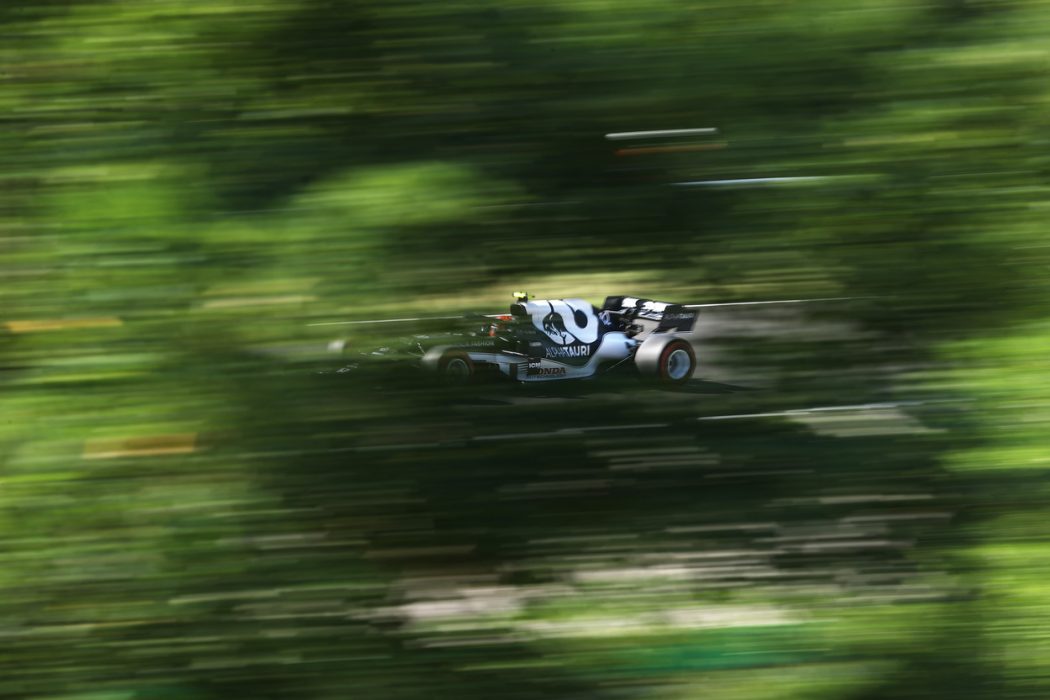 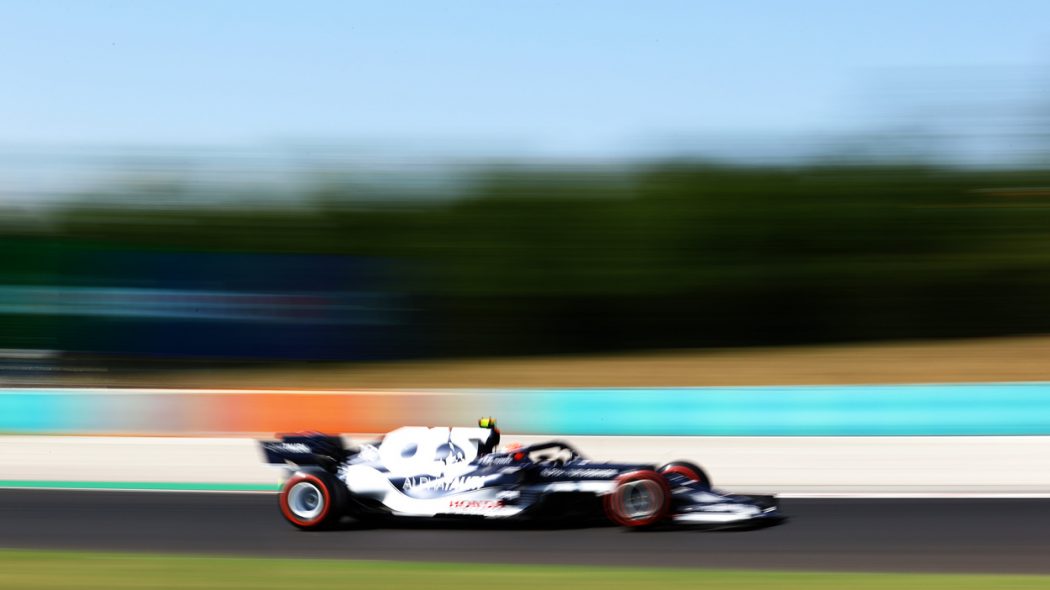 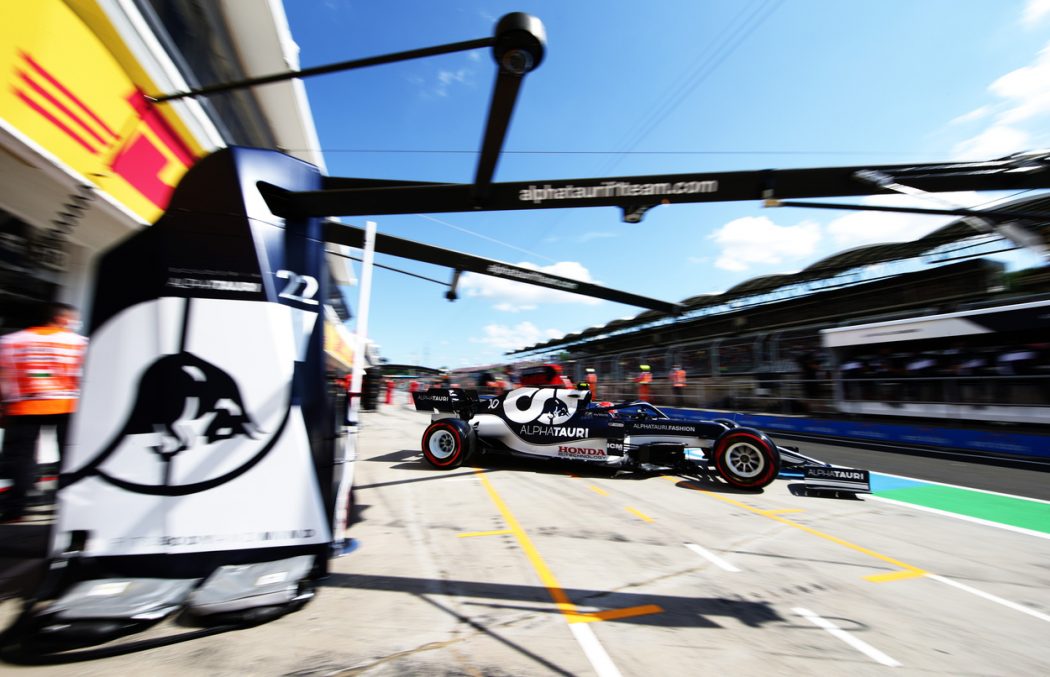 BUDAPEST, HUNGARY - JULY 31: Pierre Gasly of France driving the (10) Scuderia AlphaTauri AT02 Honda leaves the garage during qualifying ahead of the F1 Grand Prix of Hungary at Hungaroring on July 31, 2021 in Budapest, Hungary. (Photo by Peter Fox/Getty Images) // Getty Images / Red Bull Content Pool // SI202107310258 // Usage for editorial use only // 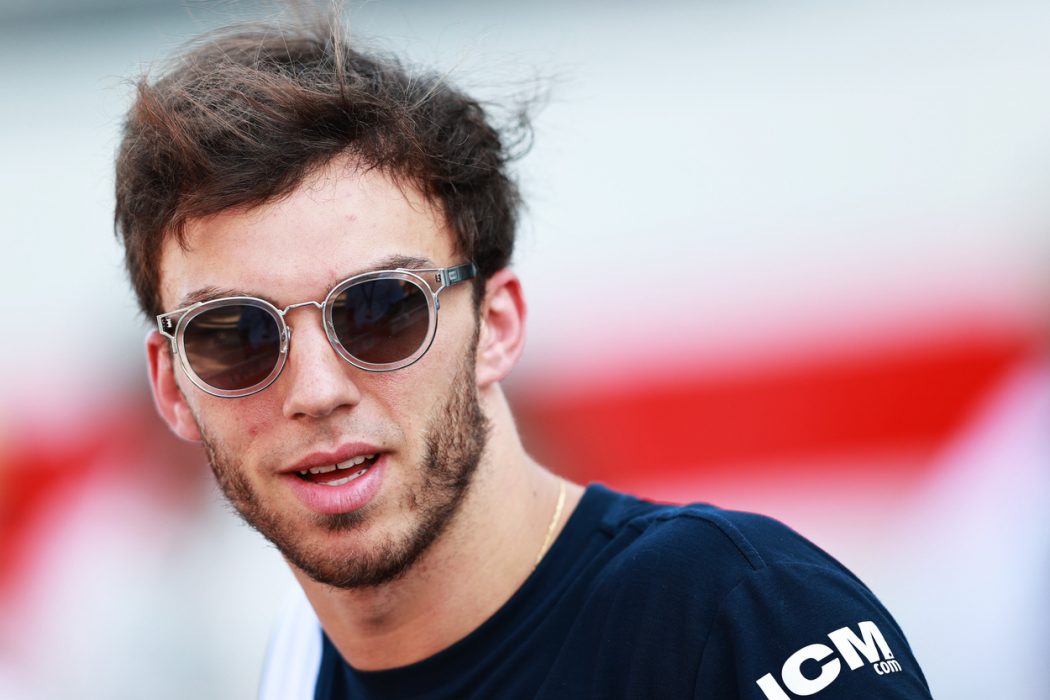 BUDAPEST, HUNGARY - JULY 31: Pierre Gasly of France and Scuderia AlphaTauri talks to the media in the Paddock after qualifying ahead of the F1 Grand Prix of Hungary at Hungaroring on July 31, 2021 in Budapest, Hungary. (Photo by Mark Thompson/Getty Images) // Getty Images / Red Bull Content Pool // SI202107310375 // Usage for editorial use only // 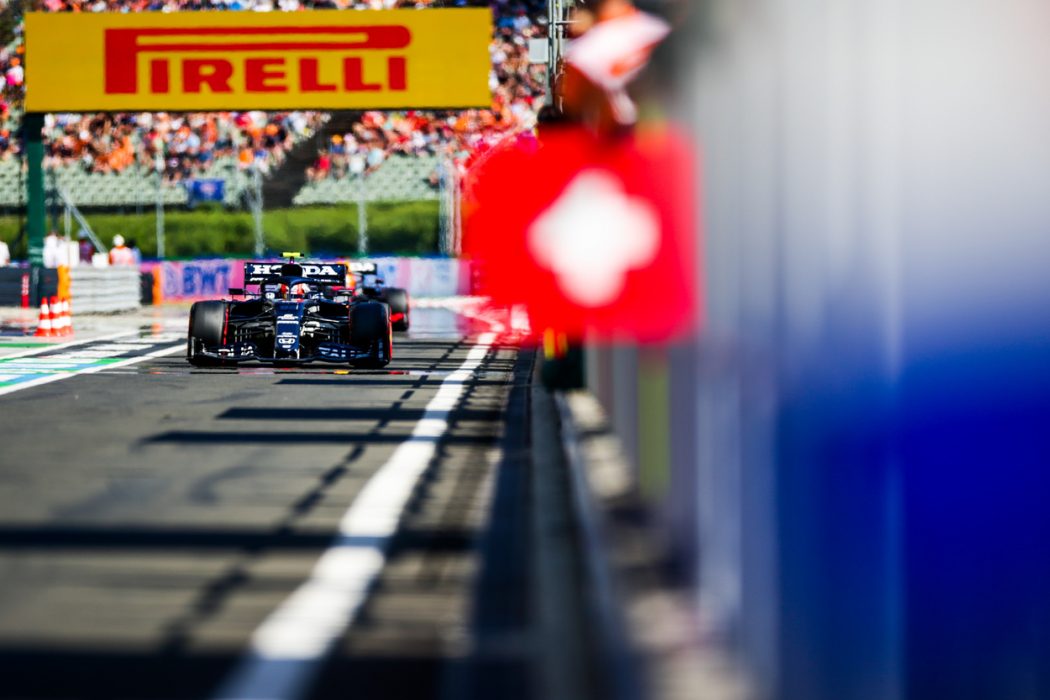 BUDAPEST, HUNGARY - JULY 31: Pierre Gasly of Scuderia AlphaTauri and France during qualifying ahead of the F1 Grand Prix of Hungary at Hungaroring on July 31, 2021 in Budapest, Hungary. (Photo by Peter Fox/Getty Images) // Getty Images / Red Bull Content Pool // SI202107310438 // Usage for editorial use only //

Pierre Gasly interview: ahead of this weekend’s Hungarian GP, Paddock Magazine had the chance to join an online call with a 25-year-old Frenchman.

Targets in 2021, new rules, his future – just a few of many topics we talked about with the winner of last year’s Italian Grand Prix. The French driver had some tough races recently but looking at the whole picture, that’s a pretty impressive season so far for him and Alpha Tauri.

Pierre, we are almost halfway through the season. How could you summarize the first part of F1 2021 from your point of view?

I think it’s been positive, and I’ve never had a stronger start to a season in Formula 1. We managed to take part in several Q3 sessions. We also scored a podium in Baku and collected many points during the first part of the year. Generally, it’s been great, but luck wasn’t always on our side, and there were races where we could’ve done much better. All in all, our target is to clinch fifth in the constructors’ championship. We’ve never finished so high up before, so that’s something I want to achieve this season.

You mentioned pre-race that you especially like this track, and you also won here back in F2 [was called GP2 back then]. Can you explain to us what makes it a special place for you?

It’s a very technical track, meaning you don’t have time to rest in the straights. You need to be entirely focused because there are many corners and some tricky sections. We are pretty busy in the car during a lap at the Hungaroring, and it has a great rhythm. As a driver, we all love this kind of challenge, and the track has been quite good to me. I had a couple of wins here in the lower categories and some strong results in F1, so it’s definitely one of the tracks I enjoy the most.

We have a considerable regulation change coming next year with entirely new aero rules. How much are you looking forward to that? Are you excited about next year?

Absolutely, I’m thrilled and fired up about next year. F1 is trying to close the gap even further among the teams, and that’s what we all want to see. However, I think it’s not going to be a revolution, and the top teams will be still on the top – just because they have the knowledge, tools, and facilities. They’re more advanced in many areas. On the other hand, the cost cap could help us to reduce the gap to others. MotoGP can be an excellent example for us as we can see that customer teams can also fight for victories and podiums there. To sum it up, I can’t wait for next year. [smiles]

I think MotoGP can be a good example for us.

Speaking about MotoGP, you also attend their races sometimes – is there anything else you would like to see being used and applied in F1?

The balance of performance would be the most crucial thing as in MotoGP, Ducati, Yamaha, KTM, Honda, Suzuki, and even Aprilia fight for the top positions. If my maths is correct, that’s already six different manufacturers, which makes the racing unpredictable. I think it would be cool to see that in F1 since we don’t have a chance to fight against Mercedes or Red Bull.

Pierre, have you tried next year’s car in the simulator? How does it feel compared to the current one? We also learnt that F1 might get rid of DRS if the new regulations will work as expected. Do you see it as a positive?

We are still waiting for a bit more data to prepare our simulator for next year’s regulations. Concerning the DRS – I think it depends on how we can improve racing next year. Right now, the high amount of downforce creates the problem, and as a consequence, we lose so much of that when following another car. In my opinion, DRS is pretty much needed at the moment because racing would be too dull without it. If we can achieve what F1 is expecting from the new regulations, then I’d welcome the idea of getting rid of DRS – why not.

We can see that you have a pretty good relationship with your teammate Yuki. Is it just a normal one, or is it better than you had earlier with your previous teammates?

I think our relationship is pretty good because of our personalities, making our relationship more entertaining. At the end of the day, it’s still our workplace, and we are both professionals. People come here with a different approach, but Yuki has a great and funny personality, making it easy and suitable to work together. I must say that I like spending time with him and we get on well. [smiles]

You had some FIFA battles earlier with Max Verstappen. Are you having the same with Yuki as well?

Unfortunately, we don’t have a PlayStation now, and I don’t think we’d have enough time for that this year as we have a hectic and intense schedule. As you mentioned, I like playing video games, so I’m sure we’ll have some fun with Yuki shortly.

We are getting to the point of the season where many people start talking about the driver market. Helmut Marko said you’ve never been in such good shape, and you were linked to some other teams as well. How do you see your future developing?

For me, it’s pretty straightforward. I only have one thing in my mind, which is performing at my best every weekend. Concerning my future – I have a contract with Red Bull, and it’s up to them to decide whether they want to stick with me. We’ve already had some discussions, but it’s still an ongoing process, and we’ll see what happens. However, I’m confident that we’ll get the answers in a couple of weeks from here. [smiles]

After your victory last year, you said that you absolutely love your team. Could you tell us what the main differences between Red Bull and Alpha Tauri are?

Concerning my future – I’m confident that we’ll get the answers in a couple of weeks from here.

Basically, I’m working with these guys at Alpha Tauri for a long time now, and I got to know them pretty well. Meanwhile, I only had a short outing at Red Bull, so I couldn’t really integrate into the team. Of course, both teams have their way – but I don’t think there is a good or bad way. At the moment I’m delighted where I am because we can work well together. There is a good understating between us, and I think the result also reflects that.

Who was your hero when you were a little child, growing up and watching F1 on TV?

I grew up watching Michael Schumacher winning pretty much all the races with Ferrari. Then, a couple of years later, Lewis came into the sport, and I liked his approach. He was swift straight away, which is impressive. Obviously, I admired Ayrton Senna as well – however, I’ve never had the chance to watch him racing live.

We can see on social media that you like many different types of sports activities. If you had to pick one favourite, what would it be and why?

Pierre, France played a draw against Hungary here in Budapest during the EURO 2020. I remember that even the French fans had a standing ovation for the Hungarian team. How did you see the performance of Hungary there?

I was impressed with the performance of Hungary! I think they played well. Hungary has a strong team with many talented players. I wish France could’ve won that game, but to be honest, Hungary played exceptionally well against us, and they even had the chance for the victory. It was an intense and delightful game in my opinion.