The rumours surrounding just what is going to happen to some of the teams on the Formula 1 grid hit fever pitch after the coverage surrounding the Singapore Grand Prix proved it in spades.

No, I’m not talking about the fact that Lotus was about to be bought out by Renault, and that Pastor Maldonado has been resigned for 2016. It’s more about the typhoon that is swirling around the Milton Keynes team owned by Dietrich Mateschitz.

With no real official announcement as to the break-up between Red Bull, Renault and Infiniti that is apparently happening at the end of this season, it still remains unclear as to exactly what will occur, when it comes to engine supply.

With the VW group being linked once again to the team, it has been a case of “chinese whispers”, as to exactly what is going on, as Christian Horner has said that it was “flattering” about the Wolfsburg-based auto giant potentially being involved.

However, the Red Bull Team Principal has been rather adamant on the fact that there have been no real discussions with VW jumping on board. This is along with the fact that it has been predicted that the German marque will have its Power Unit ready for potentially 2018.

It seems logical that Volkswagen would look to stake their claim early to providing a works outfit, but would want their package to be competitive as possible from the onset.

The rumours that have surrounded this situation occurring also seem to gather in intensity, but there is a major stumbling block that has now appeared in the United States.

Volkswagen itself has been investigated by the Environmental Protection Agency following issues regarding software abnormalities for emission controls on nearly half a million vehicles.

If sanctions are imposed for a potential financial penalty, it could be to the tune of approximately $18 billion, which could cause major ripples in the budget of VW’s overall operations, which includes motorsport.

My initial feeling is that through its different brands, the VW Group has already been so successful in a wide range of disciplines, which includes Formula 3, the World Rally Championship, the Deutsche Tourenwagen Masters, the World Endurance Championship, and much more besides.

The links to Audi becoming the “brand” that will represent the group in Formula 1, is something that Audi’s Head of Motorsport, Dr Wolfgang Ullrich, has been quick to respond any questions on the matter.

Mateschitz is looking to Ferrari as being the next best thing when it comes to engine supply, having been given the cold shoulder by Mercedes-Benz.

With Renault still not putting their cards on the table, following recent comments from CEO Carlos Ghosn regarding a buyout of Lotus F1, will VW ever consider putting their hands in their deep pockets soon? 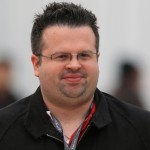