The Red Bull Ring at Spielberg in Austria became the centrepiece of an anthem in celebration of the imminent return of Formula One. 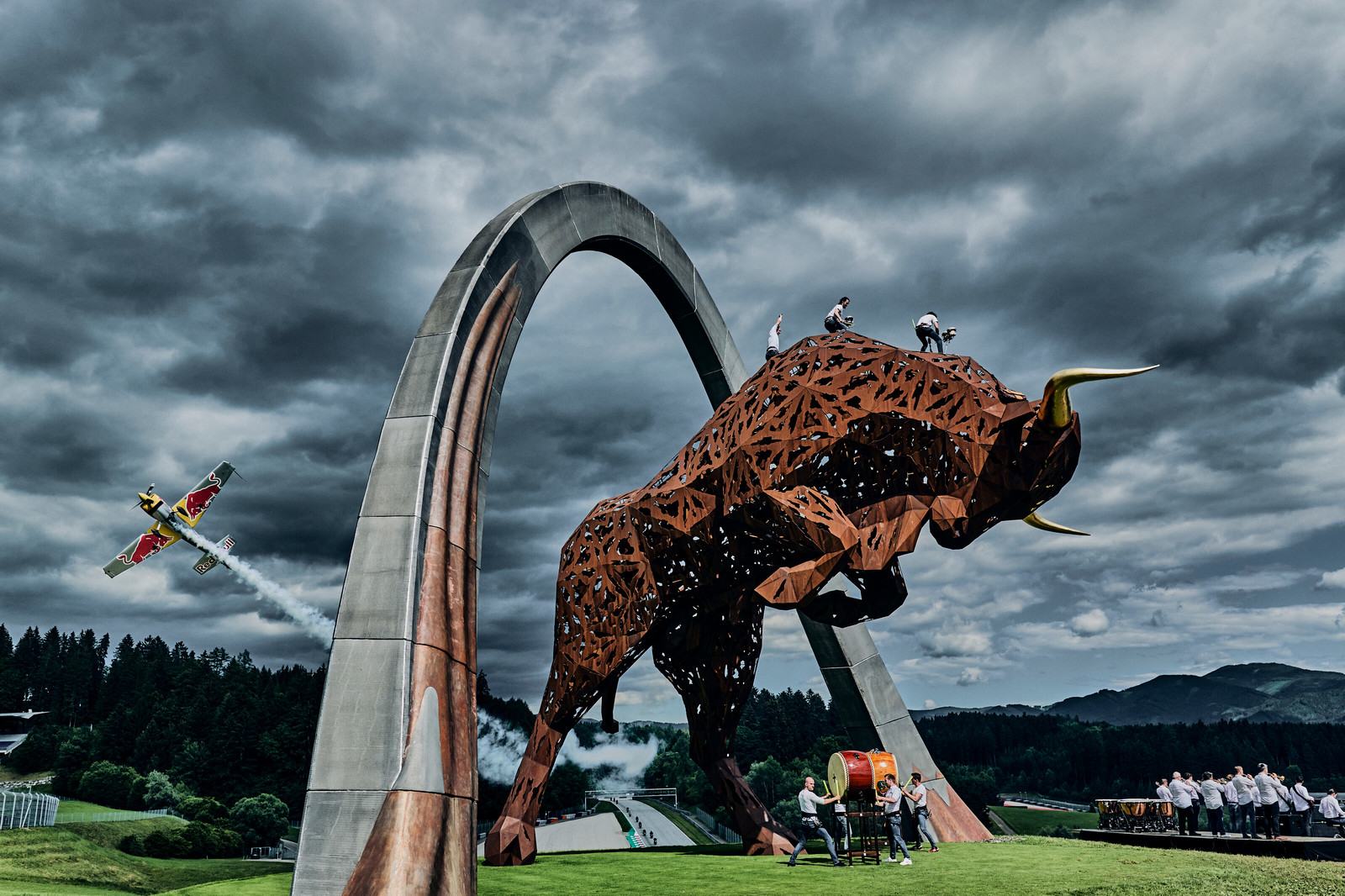 Dario Costa of Italy flies in an Edge 540 while the Percussive Planet Ensemble performs in Spielberg, Austria on June 22, 2020.

Grubinger brought together musicians from different backgrounds and a 150-strong choir to make his vision a reality.

At the heart of the musical installation known simply as ‘Drum the Bull’ was the steel Bull of Spielberg, which was brought to life by Grubinger and his fellow percussionists using brushes, metal and wooden drumsticks and even hammers.

“I was invited to see the Bull – and I drummed a little bit on it and found out that the acoustics are fantastic! I hit it and immediately I was in love,” Grubinger explained. “It was clear to me that it would be great to create a hymn for the return of Formula 1.” 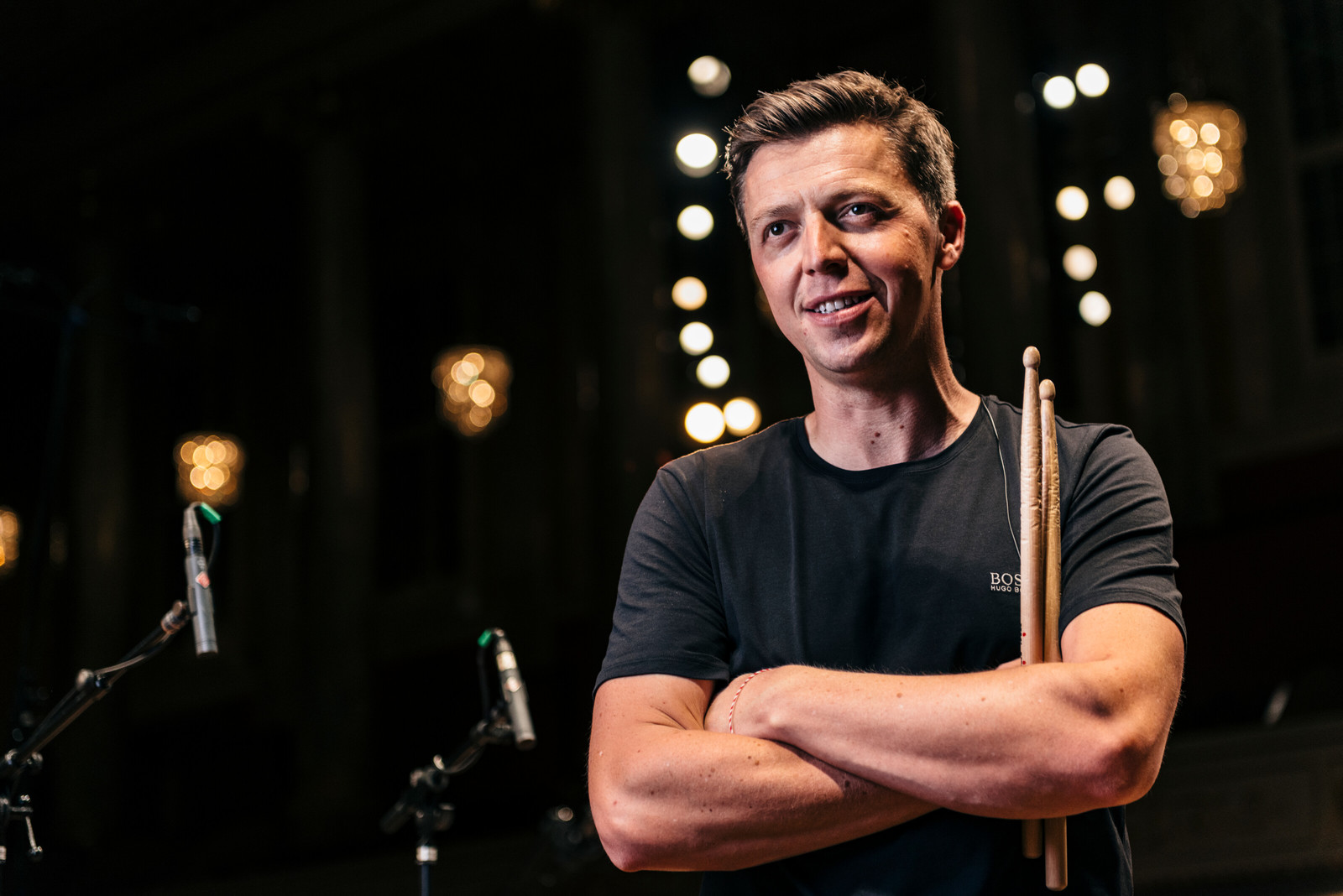 Martin Grubinger of Austria poses for a photograph at the Concert Hall in Vienna, Austria on June 20.

Included in the musical tribute is Mahler’s Symphony No. 2 (the Resurrection Symphony), which unites the carefully placed sounds created from racing vehicles such as a 1995 Sauber F1 car, NASCAR, Moto2 bikes and the Lockheed P-38 ‘Lightning’ warbird.

“It was very important to us not only to make music and then to put motorsport on top of it, but a score was actually created, and everything was timed very precisely.”

Grubinger explained that the drivers and pilots had to be as accurate as musicians to be perfectly synchronized into the piece alongside the percussive ensemble and accompanying choir. 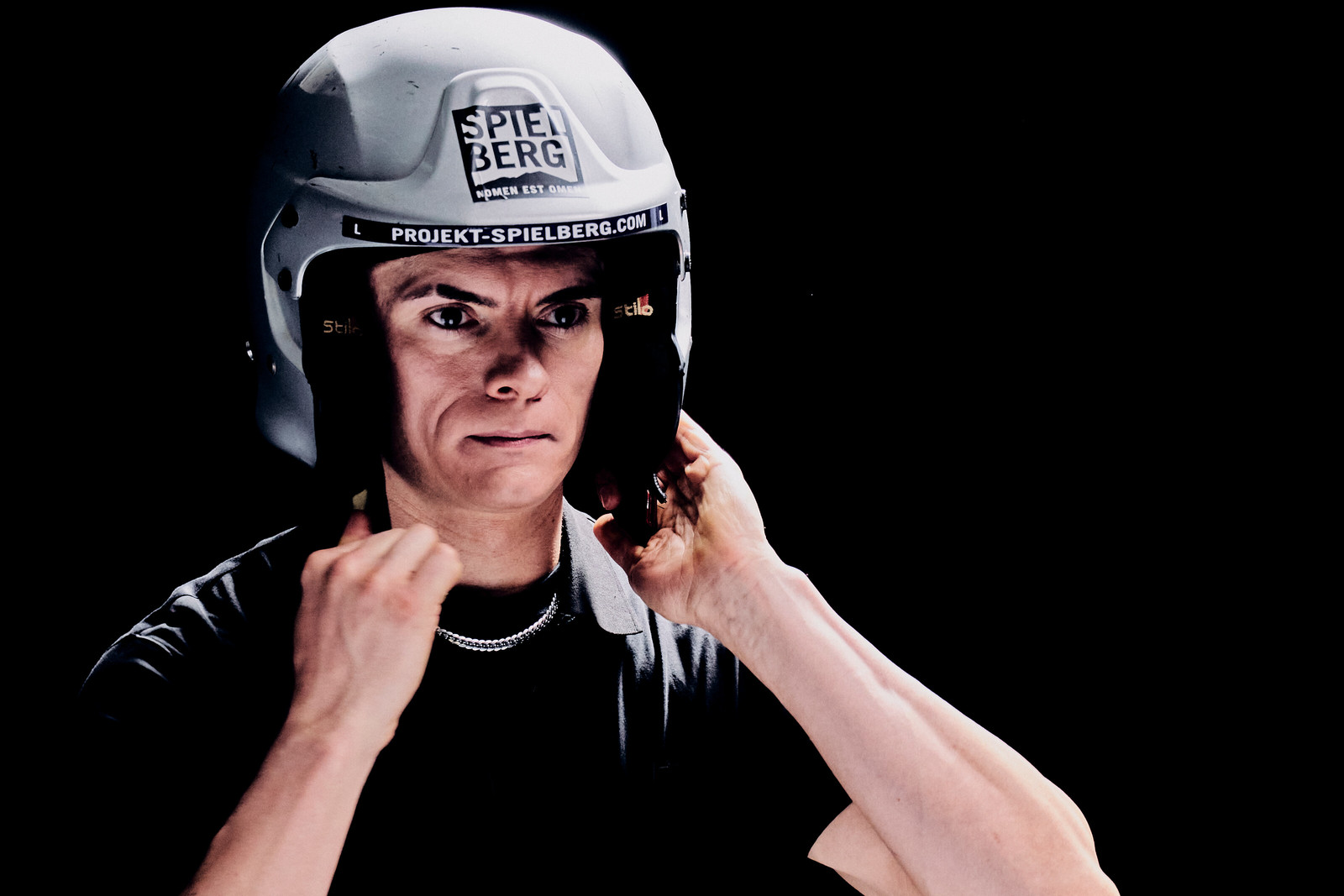 Cameron Carpenter of the United States poses for a photograph in Spielberg, Austria on June 22, 2020.

“There is the musical score with bars and tempo and the band playing and then we had to put motorsport on top. But the score created needed everything to be timed precisely. For example, at bar 230 we had the air racer heading directly into the direction of the Bull. At bar 237 he had to make the vertical flight.”

He [Martin Grubinger] wanted a big and dramatic statement and Martin and I have worked together before in Germany, and we’re friends, so he kindly asked me to join and bring the international touring organ to be a part of his work.

“The pilots were deployed exactly to the beat. It was a lot of fun because the engine sound mixes with music and a special dynamic is created.”

“It is a work that stands for tradition, modernity, creativity, technology, the beautiful landscape, the love of art and culture and also a certain amount of craziness.”

American Cameron Carpenter, who played his International Touring Organ – which took 10 years to build – said Grubinger asked him to join for a project that was intended to be a big statement: 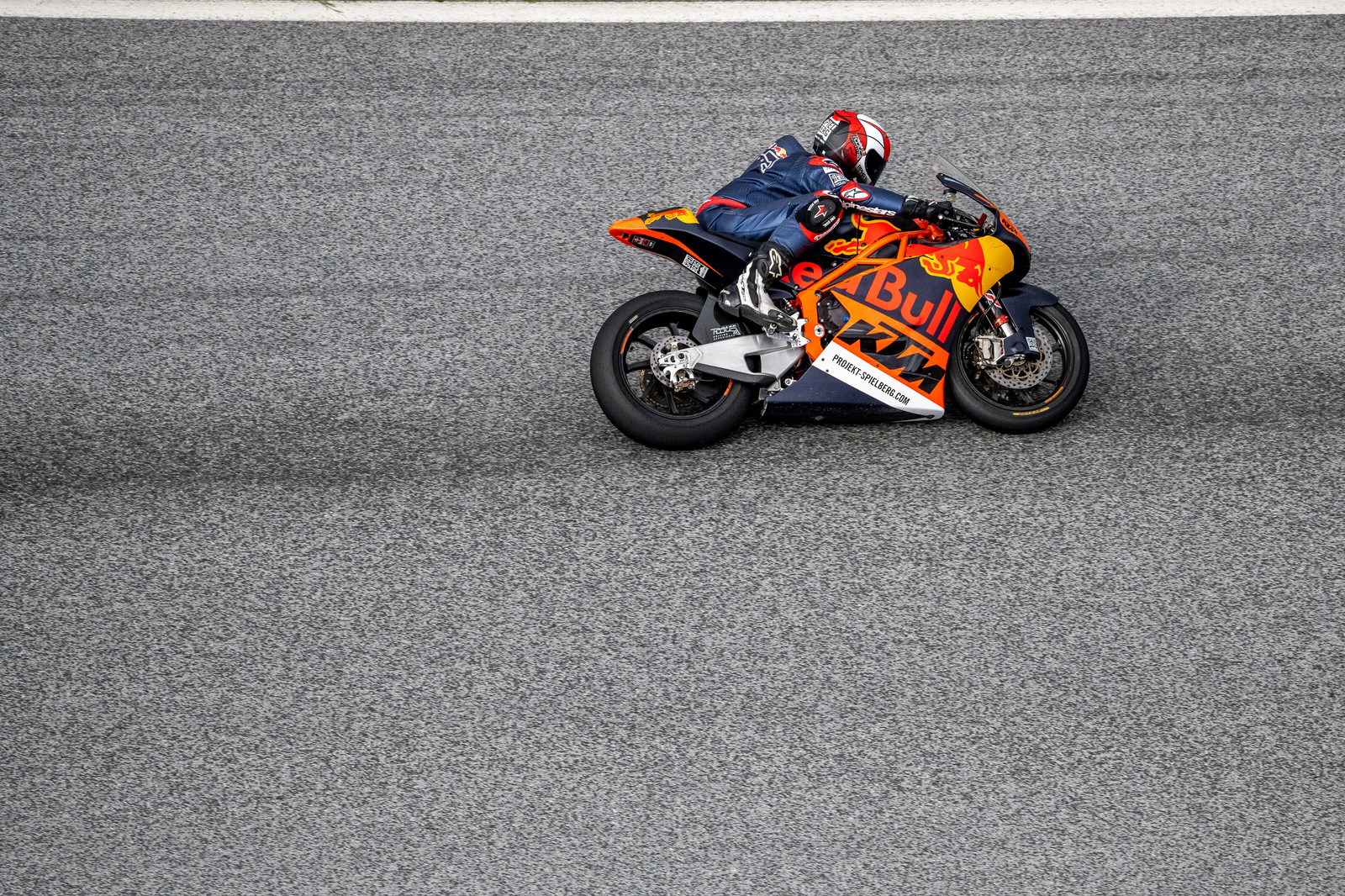 A MOTO 2 bike seen during the recordings of the Percussive Planet Ensemble in Spielberg, Austria on June 22, 2020.

Carpenter and his touring organ appear in the musical work atop a Dakar Rally service truck, driven by 2018 Dakar two-wheel winner Matthias Walkner of Austria, who said the world’s attention will be on the Red Bull Ring this weekend.

“It was quite amazing and really cool how the whole motorsport world will look to Spielberg,” Walkner added.

Former Grand Prix winner David Coulthard, who was at the Red Bull Ring during filming, added that this anthem was a unique way to welcome the return of Formula 1.

The music singing out across the hillside here in Spielberg and the noise of the engines with the planes passing over was a beautiful orchestra of noise to say welcome to Formula One 2020.

“We have not had two (back-to-back) races at the same Grand Prix circuit, so this is something quite unique. It really is going to be something very special to see who will be the winner of this delayed start to the season.”

Made of Corten steel plates – weathering steel that develops a rust-like appearance – concrete and aluminium, the Bull of Spielberg weighs in total 1,300 tonnes, is 18 metres high and has stood as a landmark of the Red Bull Ring since May 2012. 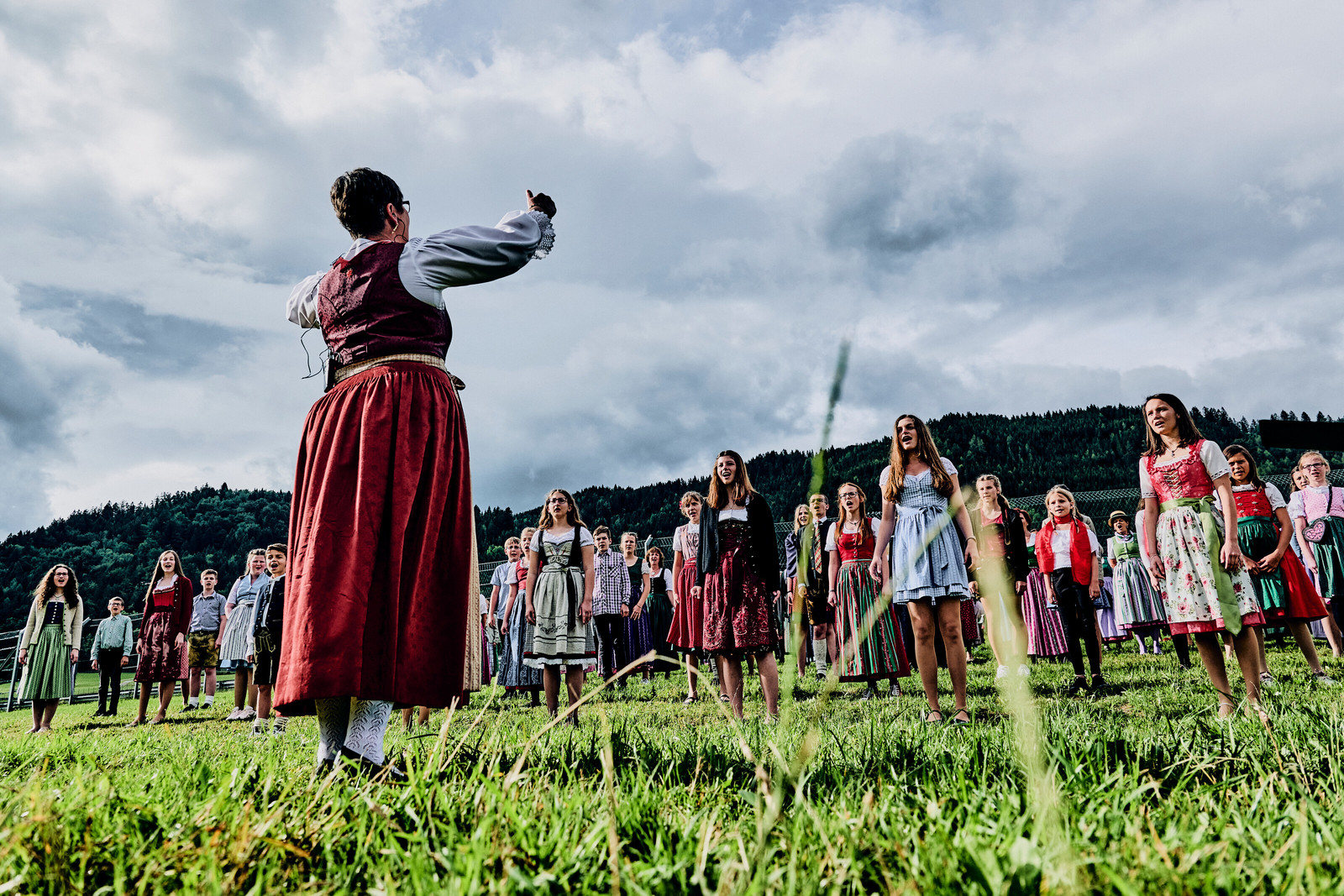 A traditional chorus of Austria performs during the recordings of the Percussive Planet Ensemble in Spielberg, Austria on June 21, 2020.