Sainz Sr and Jr reveal car passion that brought them together

Carlos Sainz is a name synonymous with motorsport. In this interview, they talk about their passion for motoring and family rivalry.

At 58, Carlos Sainz Sr is a rally legend, both in the World Rally Championship and more recently in the Dakar. And his namesake son, Carlos Sainz Jr is about to start his sixth Formula 1 season.

In this interview, they discuss their respective journeys to the top and the passion that brings them together…

Sr, you’ve truly witnessed the history of rallying. What can you tell us about that era?

Carlos Sainz Sr: I’ve been so lucky to live in the old days of rallying when everything was possible. We had long rallies… driving a lot into the night. I’ve lived all the changes through the rally times up to now as well. I was lucky to live all these transitions.

Sr, what was your favourite car during your career; a moment that stuck in your mind?

Sr: It’s always difficult to answer as you need to put each car in its time to judge it properly. Because it is not fair to compare a 2004 car to a 1990 car. It would be nice to choose every small detail from the best of each car and build a car like that. That would be good fun. I cannot forget the Toyota Celica [in which] I won the two championships, the Subaru, the Ford Focus, the Escort and later on the Xsara.

Sr, who was your toughest team-mate?

Sr: It’s difficult to say. I had fantastic team-mates, very strong, like Juha Kankkunen, Didier Auriol. For sure, Colin [McRae]. I was with him in the most years. He was a good friend of mine towards the end and before his sudden and very sad accident. Then, Sébastien Loeb, you cannot discount him. I have big respect for all those champions. 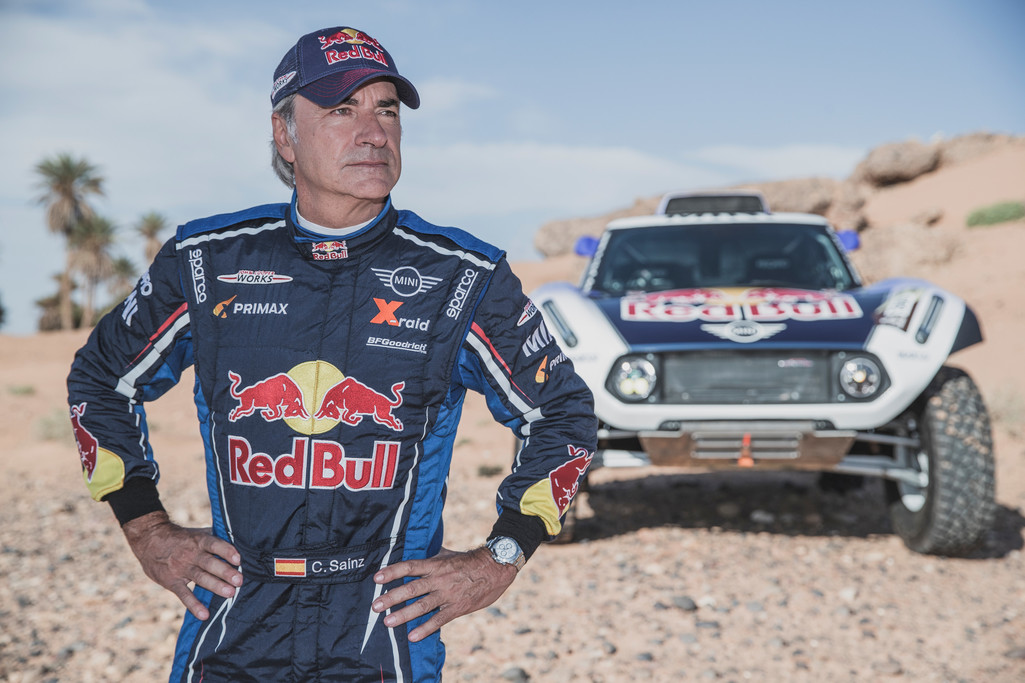 And you Jr, when did you realise you had a passion for getting into Formula 1?

Jr: I’d start with my passion for cars. I’ve had a car at home or near my house since I was two – an electric car first doing doughnuts and going sideways around the back yard. And I started to go-karting indoor when I was five years old. As everything developed suddenly my career started to go more towards karting. Then in 2005, I went to the Spanish Grand Prix and there’s where I fell in love with Formula 1 properly. Ever since my target was to become a Formula 1 driver.

Jr, would you ever fancy taking part in the Dakar?

Jr: The Dakar, I will give it a go, but by that time my Dad will probably be over 70 years old and I hope by then for the health of my Mum and himself that he’s still not racing. My target is to do a rally at some point. I am so focused on Formula 1 right now that I can’t focus on anything else.

What’s the biggest difference in racing technology from rallying to F1 for both of you?

Jr: First of all, we need to start with the conditions. A Formula 1 driver drives in a circuit where he perfectly knows the corner once he goes into qualifying and the race, which gear to use and which line to take. It’s all about precision and how good you are at exploiting that car to the absolute limit and trying to extract the last tenth of a second. Rally driving is the same with a bit more improvisation and feeling. 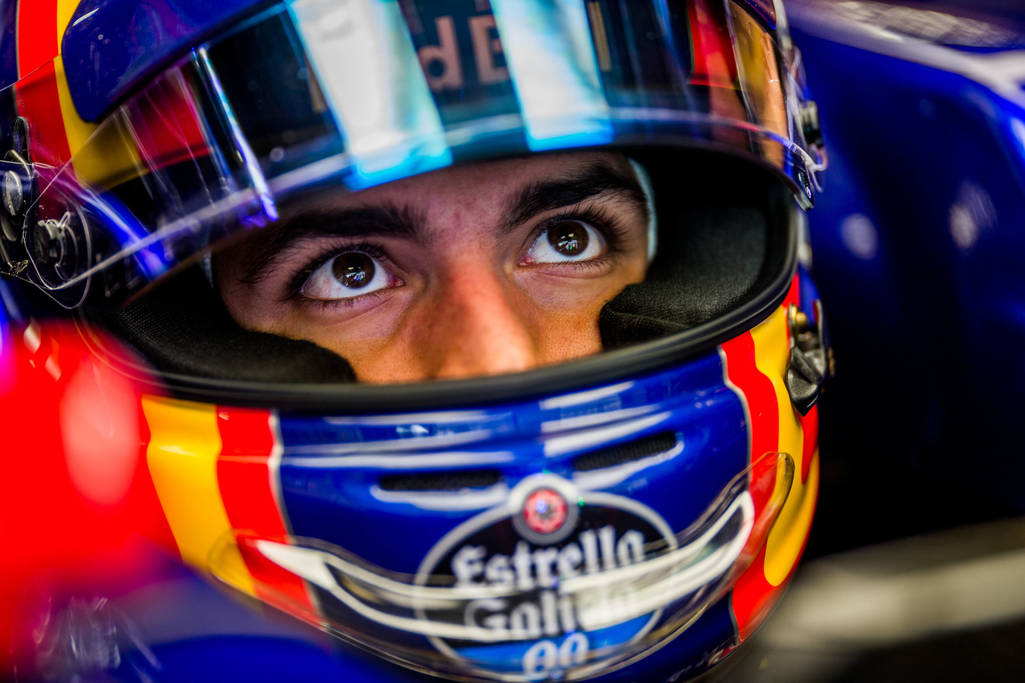 SUZUKA, JAPAN – OCTOBER 06: Carlos Sainz of Scuderia Toro Rosso and Spain during practice for the Formula One Grand Prix of Japan at Suzuka Circuit on October 6, 2017 in Suzuka. (Photo by Peter Fox/Getty Images)

Sr: Everyone’s looking for the last tenth, whether in a circuit or in a rally. Driving a rally car on gravel gives you the impression that the car slides a lot, but you’ll really taking the last centimetre of track and going as smooth as possible. Driving on the tarmac has a lot of similarities to circuit racing and, of course, the Dakar is a completely different discipline. We are driving the complete opposite sides and, with the biggest difference between two cars, two competition cars in the world, F1 car and rally car, but the philosophy is the same.

Sr, where does the Matador nickname come from?

Sr: The first year I came to the World Rally Championship, my team-mates were Kankkunen and Juha Piironen. I think I was the first Spanish person in a factory team and they hadn’t met a lot. They started to call me, ‘Hey, matador’, as I was pushing hard and I’m from Spain. They only knew matador, siesta and paella… and they decided ‘Matador’ was the closest nickname to who I was. It went on from there. 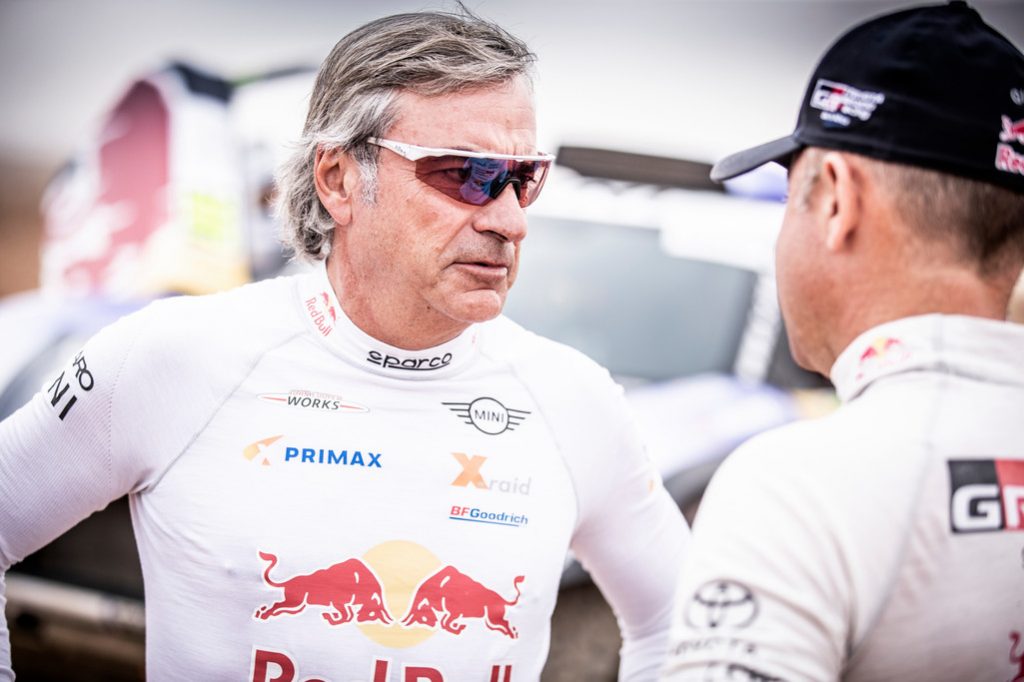 Sr, how happy are you that your son followed you into motor racing?

Sr: As you can imagine I’m a proud father, but more so because I think he worked very hard to arrive where he is now. He decided to go the Formula 1 route. If he’d decided to go the rallying route, I could have helped him much more. I do try to help him whenever I can, but less and less now. He is already 25 and knows what he has to do. I just follow like another fan – maybe a special fan!

How competitive are you both together?

Sr: Of course! In cars, it’s difficult to fight each other because he’s much better than me already on circuits. In the rally, he has a very good feeling. In other sports, we are also fighting. Each time, it’s becoming more and more difficult… but there are still a couple of things where I can put him in a little bit of difficulty.

Jr: Sometimes… he beats me by a mile at golf or squash. I don’t think I’ll ever beat him on straight lap times [in rallying] until he’s too old