From 1962, the South African GP was a stable point in the early months of the Formula 1 season. The last Grand Prix race there was run 25 years ago – and there is almost no chance of a return. Let’s see what Fritz-Dieter Rencken, a South African Formula 1 correspondent of RacingLines thinks about the matter.

Some Formula 1 races in South Africa will remain to be eternally remembered: in 1968, Jim Clark grabbed his 25th victory in Kyalami and broke Fangio’s record of 24 wins – and it was Clark’s last one too since he died a few weeks later. Kyalami sadly saw the death of Peter Revson in 1974 during a test session, then in 1977, Tom Pryce lost his life after hitting a young track marshal. Mario Andretti scored his first victory in 1971 here, but in 1975 came the greatest day for the locals: a home win for Jody Scheckter in his Tyrrell.

Formula 1’s governing body decided against the South African Grand Prix because of the apartheid regime and threw it out of the calendar in 1985. After the political changes, the race came back at the heavily modified track for 1992, but after only two events, the Grand Prix completely vanished.

Fritz-Dieter, how do you remember the South African GPs?

Well, of course, the SAGP was important for us – it was a genuine chance of seeing the top drivers in action. We were one of around 16 countries to be part of the world championship at the time, so it was also an honour to have the GP here. We had our own Formula 1 series until the late 1970s, and the rules were very stable (cars could complete for about five years then), so it was also an opportunity for our drivers to measure themselves against top competition. When we lost the country in 1985, we were extremely confused – it was due to political reasons, yet the country that replaced us on the calendar was Hungary, then under communist rule! Of course, in retrospect, South Africa should have lost its GP over apartheid, but I can’t help feeling double standards were at play…

A GP can only provide aspiration where it leaves legacy programmes in place.

The Grand Prix was aspirational in that it gave youngsters a target – I don’t believe Jody Scheckter would have made it to Formula 1 (or the world championship) without this GP and the local support he received as a result of it. But I also feel that a GP can only provide aspiration where it leaves legacy programmes in place. Since Formula 1 adopted a commercial rights approach and legacy programmes are costly to the entity (now Liberty Media) aiming to make a pile of money out of Formula 1, I believe the chances of legacy programmes are diminishing. Look at the calendar: despite races being held in Korea, Turkey, Bahrain, Abu Dhabi, the US, Baku, China, Hungary, Singapore and Malaysia, no real talents have come through from these countries, if at all. Equally, Finland has delivered three Formula 1 champions, yet has never held a Grand Prix… So the perceived benefits of a GP don’t always stack up.

Well, a Formula 1 GP is a very costly event and South Africa has many social issues. The only way our country could stage a GP is with state support, and that money could be far better spent elsewhere. I also fear that a race of this sort would suck all the motorsport money out of the country. All the companies currently active in South African motorsport – tyre, fuel, drinks, sponsors – would be forced to pump it into activities at the GP, leaving little for domestic racing.

There are rumours from time to time of the return of the South African GP – how do you see the chances?

They are no more than rumours. A street circuit costs a fortune and leaves no legacy on Monday afterwards, while a GP at Kyalami would likely place the entire circuit at risk unless there was some form of state underwriting, which we discussed above. If a SAGP is such a wonderfully profitable idea, why doesn’t Liberty rent the Kyalami circuit and stage their own race? 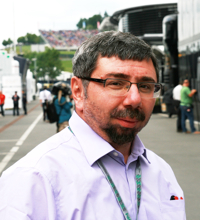