The coolest and most interesting sponsorship deals in F1 history

Formula 1 has had a long relationship with sponsorship deals. The sport wouldn’t have grown into the huge behemoth that it is today without its teams being able to sell space on their cars for brands to add their logos.

The practice began with Lotus in the 1960s but soon spread right across the paddock. Before then, cars were painted in their national colours. For example, the Ferrari vehicles were painted in their iconic scarlet red, while teams from the UK used British racing green. After the introduction of sponsors, the colour often reflected the branding of the team willing to pay the most.

Over the years, there have been many brands that have come and gone from Formula 1, including major car manufacturers like Toyota and tire suppliers like Bridgestone. Among them, there have been plenty of mundane deals that you’ll likely forget about very quickly. But every now and then, a sponsor appears on a car that really stands out and attracts your attention.

Here are some of the coolest and most interesting of these deals.

In the mid-2000s, the British sports car brand Jaguar was one of the teams competing in Formula 1. In addition to their long-term partners with big brands like HSBC, the team struck some short-term sponsorship deals that would last no more than a few Grands Prix.

One of these resulted in a real diamond valued at $250,000 being mounted to the nose cone of one of its cars at the Monaco Grand Prix.

The stunt was to promote the release of Ocean’s Twelve (2004), the sequel to the smash hit Ocean’s Eleven (2001). It probably sounded like a great idea to the PR and marketing teams involved, except there was a flaw in their plan.

F1 cars have a tendency to crash, especially in Monaco. When they do, bits of bodywork often go flying off in all directions. So when Christian Klien crashed this diamond-studded Jaguar on the first lap of the race, it probably shouldn’t have been too much of a surprise that the diamond fell off and got lost.

In true heist-movie style, the shiny rock has never been found. It also wasn’t insured…

While Red Bull might be a company that sells drinks, it has positioned itself as the fuel for thrill-seekers. Over the years, its marketing has included sponsoring a man to skydive from space back to earth, a pilot to fly a plane through a road tunnel, and a stunt rider to jump a motorcycle onto a 10-storey model of the Arc de Triomphe in Las Vegas.

That’s why the Red Bull F1 team’s recent global partnership with PokerStars is a perfect match. The online poker platform positions itself as being a brand for adventure-seekers which is reflected in its recent “I’M IN” campaign.

The partnership sees the Pokerstars brand added to the Red Bull cars and has also involved the two running competitions that allow players to win tickets to Grand Prix events. 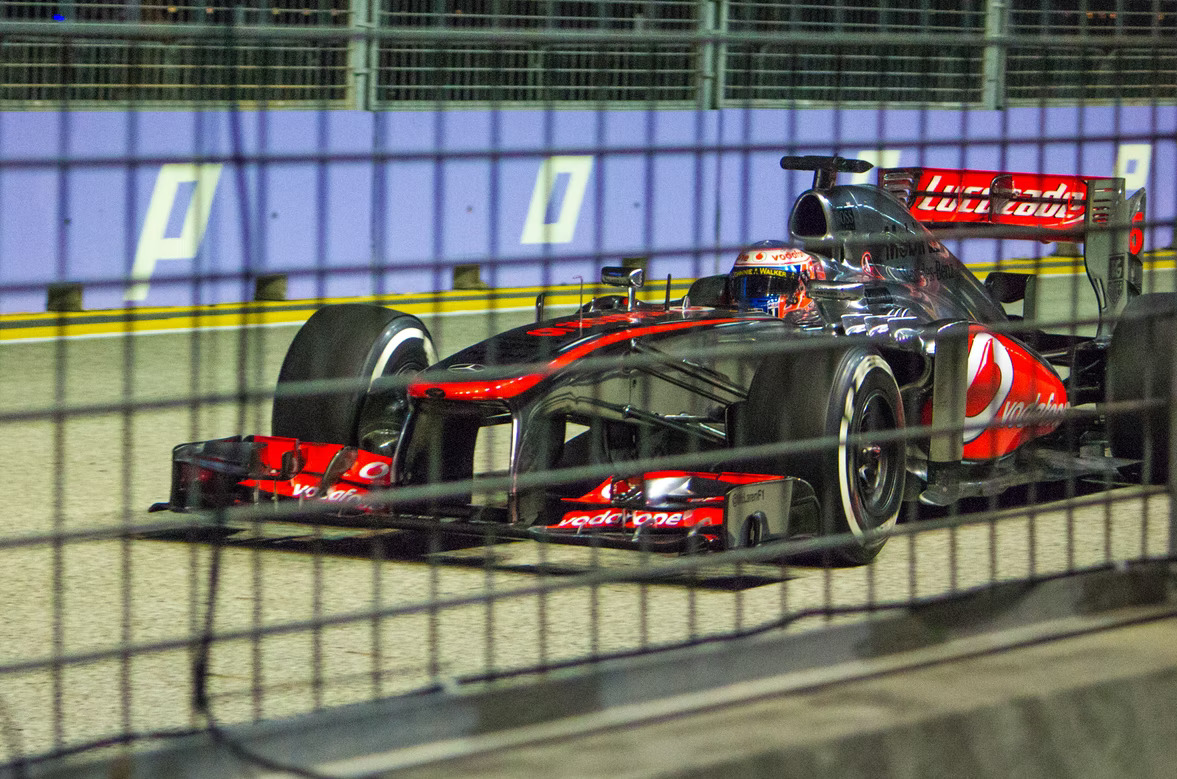 In the early 2010s, McLaren created a series of animated videos that it called Tooned. The idea behind them was to change the public perception of the team as being “cold and sterile”, something that had been created over the years by the fact that the team had offices with snow-white walls and required all its drivers to conform to certain hairstyle rules.

Tooned featured cartoon versions of McLaren drivers, initially Lewis Hamilton and Jenson Button, though when the former left to go to Mercedes, a cartoon Sergio Perez replaced him.

Tooned ran all the way into the 2016 season and even featured the legendary Murray Walker. In total 30 episodes were made, all of which can still be found on the team’s YouTube channel, though they were also broadcast on Sky Sports F1.

The Tooned logo even appeared on the McLaren cars at certain points in his four-year run, including in a prominent spot on the rear wing, though it was later replaced by fee-paying sponsors.