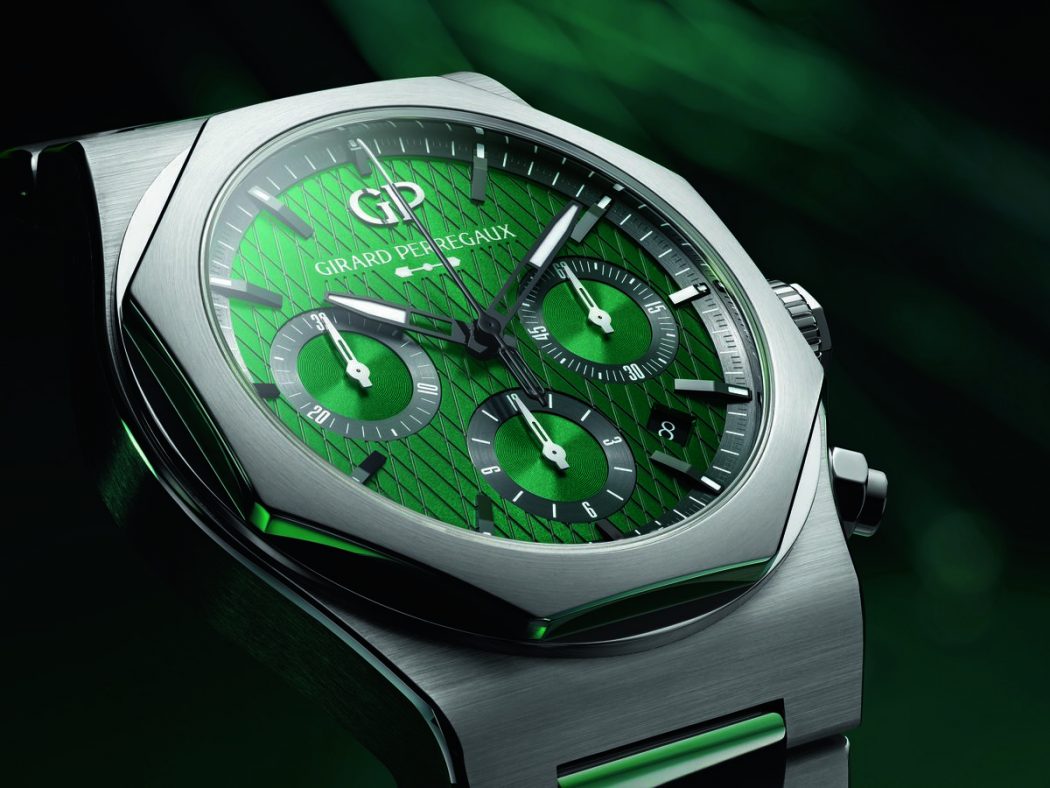 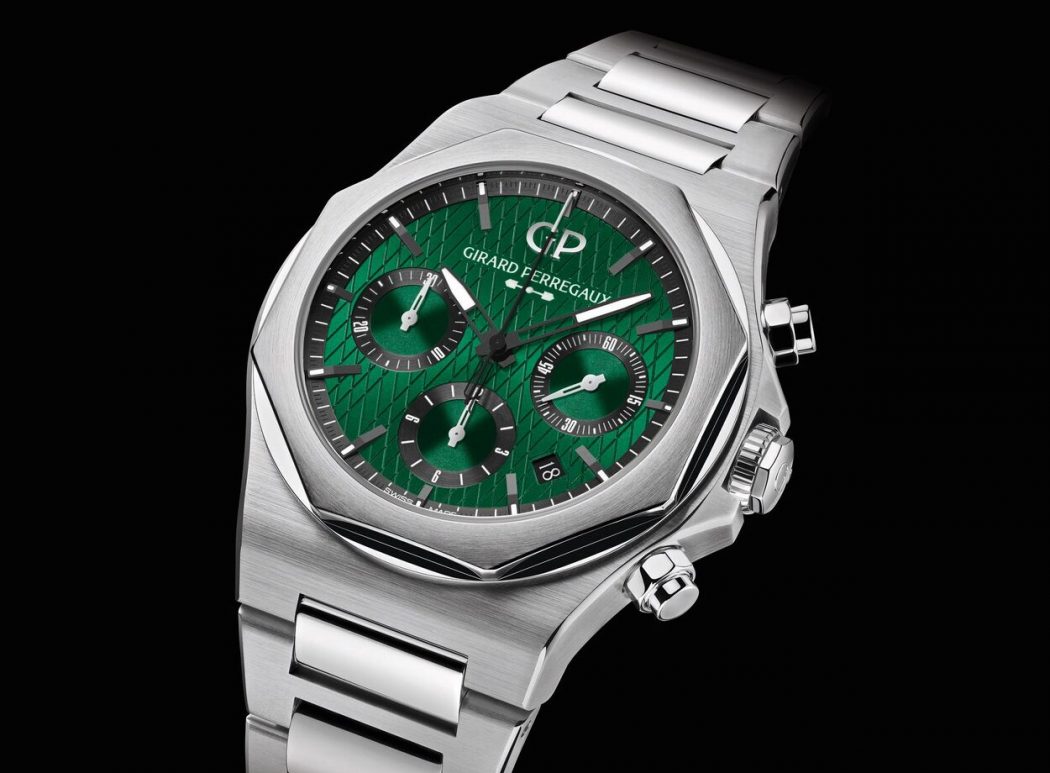 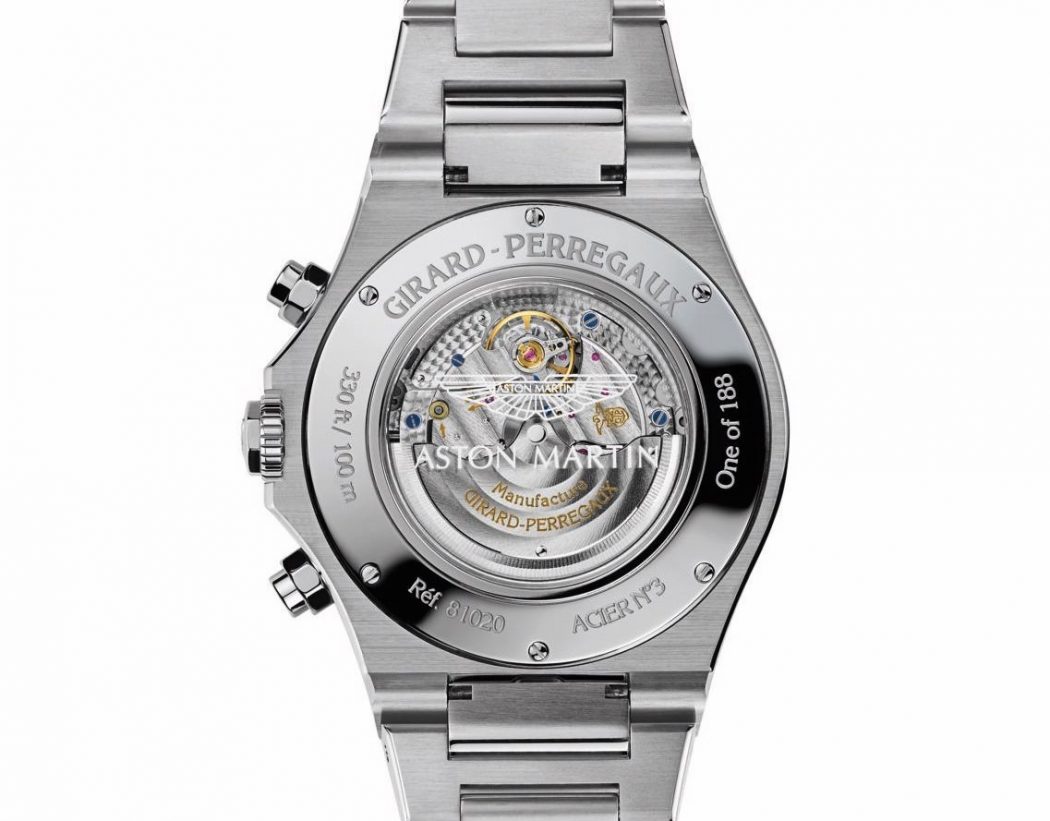 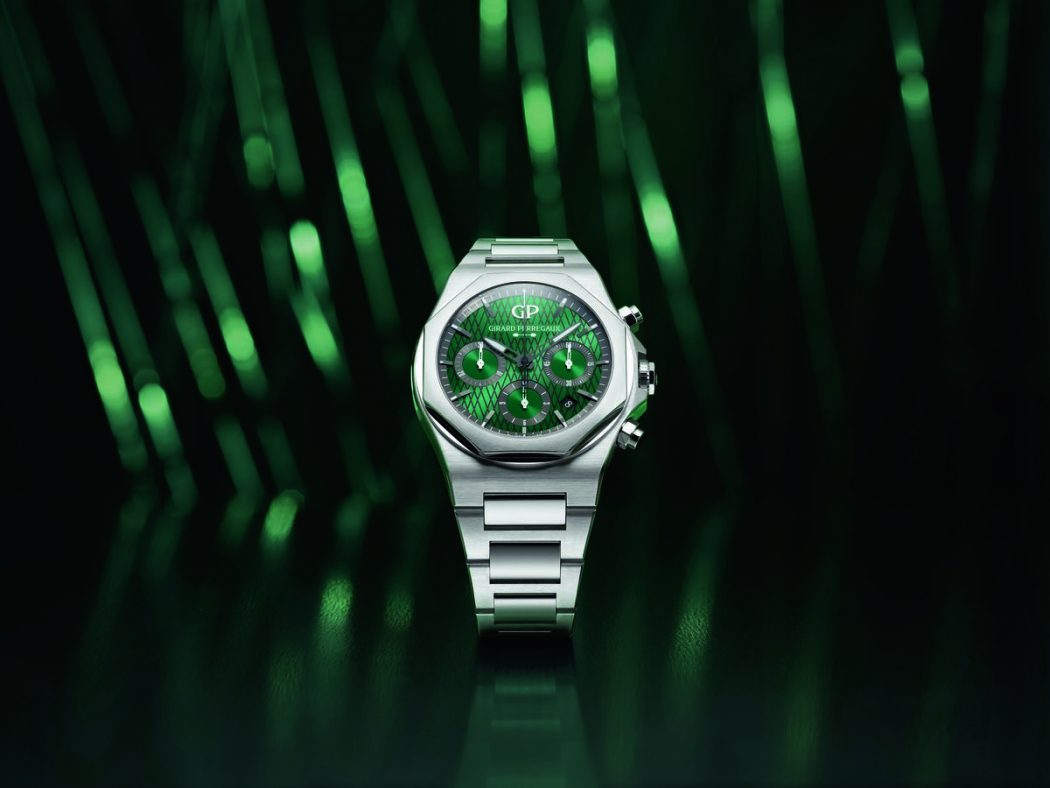 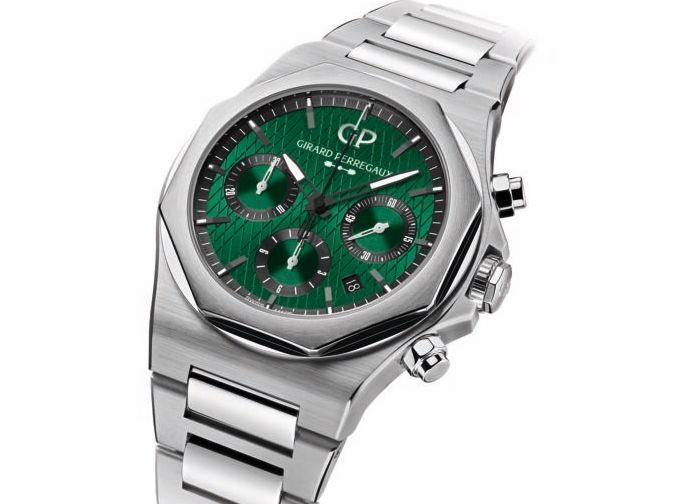 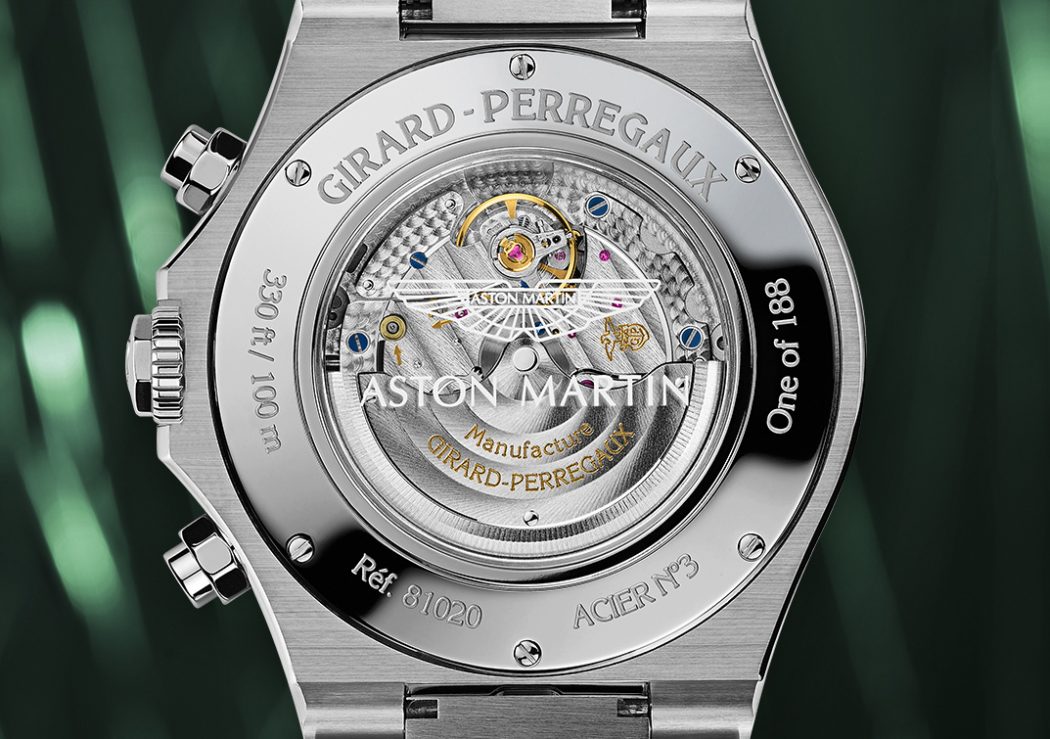 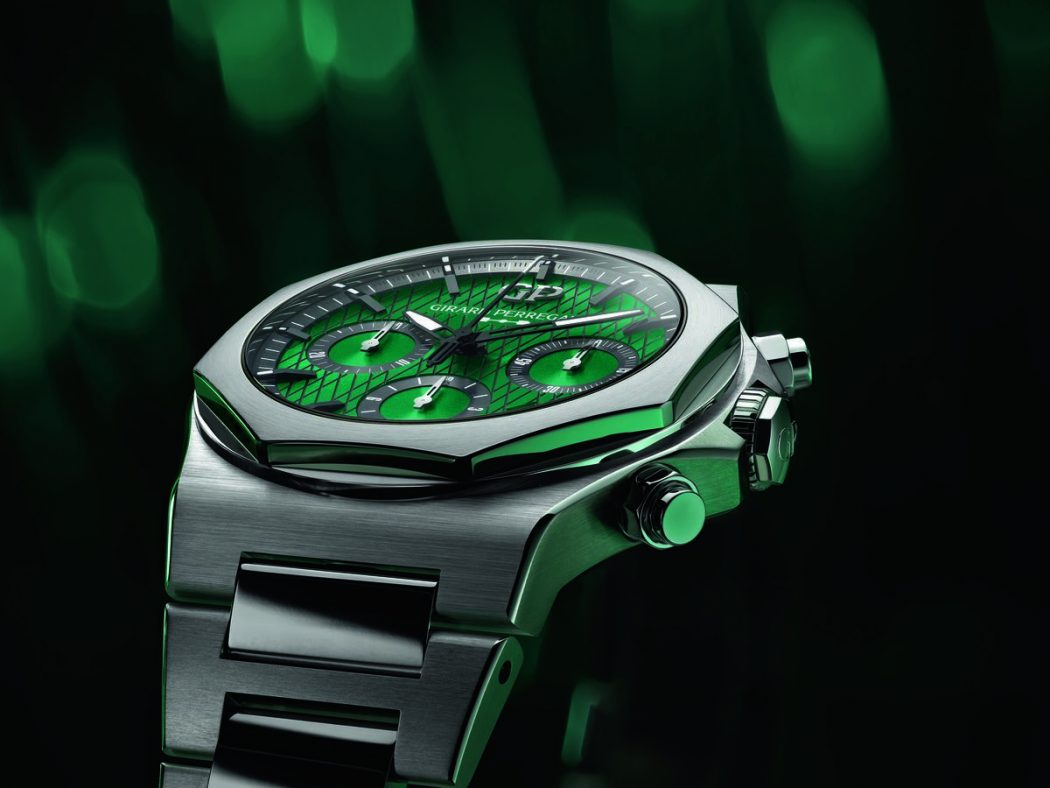 The partnership was first revealed in early 2021, and indeed, a genuine friendship formed between Girard-Perregaux and Aston Martin has led to the creation of a new timepiece, the Laureato Chronograph Aston Martin Edition. Its styling masterfully plays with shapes, textures, and light, tailored to those who appreciate luxury and performance. Collectively, the two companies have over 330 years of amassed know-how, something that is evident when appraising both firms’ creations. However, while they respect their heritage, they share a resolutely forward-thinking outlook.

Back in the early 1900s, various colours were assigned to racing cars to distinguish the different nationalities of the teams. As a result, French cars were presented in blue, Italian cars were famously red, Belgian cars were yellow, German cars were silver, and British cars were dressed in British Racing Green. As a British marque, Aston Martin adopted green as its racing colour with the most famous example being the Aston Martin DBR1 that won the 24 Hours of Le Mans in 1959. From that car to the modern-day Formula 1® car, Aston Martin’s racing colour has remained green.

The Laureato Chronograph Aston Martin Edition is the latest creation from Girard-Perregaux, made in collaboration with Aston Martin. Its dial is suffused with a delightfully decadent application of what is now known as “Aston Martin Green”, achieved by painstakingly applying paint twenty-one times to the dial, forming seven distinct layers of paint as a result. The automotive influences also encompass cross-hatching, a diamond-like pattern first seen with the ultra-luxury car manufacturer’s ‘AM’ logo (1921 – 1926). This motif was also inspired by the quilted seats found in the British brand’s numerous high-performance sports cars.

Our Manufacture has a long history of collaborations, beginning with our founder Jean-François Bautte who brought different “établisseurs” together under one roof, effectively creating one of the first Manufactures as we know them today. Not only has our partnership with Aston Martin yielded two exceptional timepieces, but it is also indeed a meeting of the minds and marks the beginnings of a true friendship between both brands and our teams. The Laureato Chronograph Aston Martin Edition is evidence of that mutual understanding and shared philosophy.

As Aston Martin and Girard-Perregaux strengthen our partnership, the same is happening with our common design ethos, geared towards discreet luxury. Evidence of it continues to appear in subtle touches throughout the watch, for instance, in its partially open-worked hour and minute hands, which have been purposely designed to evoke thoughts of racing cars, eschewing extraneous material to deliver superior performance. Likewise, the central chronograph seconds hand features a counterweight that resembles the sides strakes first seen on the 1958 Aston Martin DB4.

Three counters grace the dial, two chronograph registers and a small seconds display. Each counter features a partially openworked hand, perpetuating the design of the hour and minute hands. The central section of each counter is snailed. A date display is positioned at 04:30, completing the inventory of functions.

Sporting an octagonal bezel, the profile of this model honours the watch brand’s iconic Laureato of 1975. Upholding Girard-Perregaux’s design philosophy, the case masterfully plays with different shapes. Moreover, the numerous curves, facets and lines, along with satin-finished and polished edges, collaborate, delivering a wonderful play with light.

A pane of sapphire crystal, positioned to the rear of the watch, affords sight of the automatic, Manufacture movement, the Calibre GP03300-0141, marking the first time a Laureato Chronograph features an open case-back. This movement, based on the highly regarded Calibre GP03300, is endowed with Côtes de Genève, in both circular and straight forms, polished sinks, thermally blued screws and perlage. The movement also bears the eagle emblem, signifying it is an in-house calibre.

The watch is housed in a 42mm 904L stainless steel case. This particular grade of steel is less common than 316L and is costlier, the relative benefits of which include superior corrosion resistance, improved scratch resistance and a much brighter, luxurious appearance. The use of 904L stainless steel extends to the bracelet which is enriched with a satin-brushed finish.

When appraising the composition of the Laureato Chronograph Aston Martin Edition, its profile encompasses different shapes, finishes and hues. Its design delivers functionality and beauty. Furthermore, it celebrates the past while simultaneously embracing the future. It is this approach that resonates with both companies, reinforcing the rationale for the ongoing alliance between the two prestigious marques.

The Laureato Chronograph Aston Martin Edition, a limited edition of 188 pieces, is immediately available worldwide in all authorised Girard-Perregaux retailers. 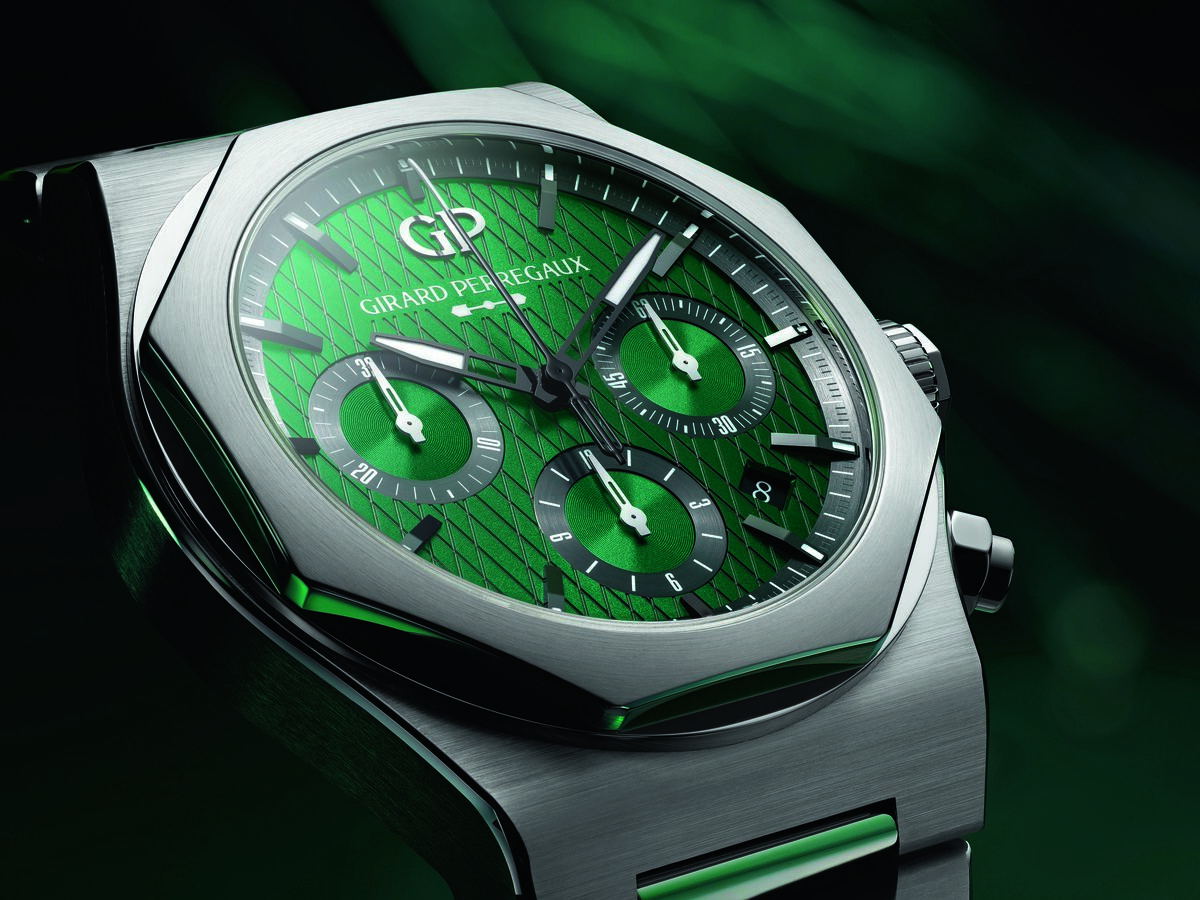