Touchdown for the 2016 FIA Formula One World Champions! 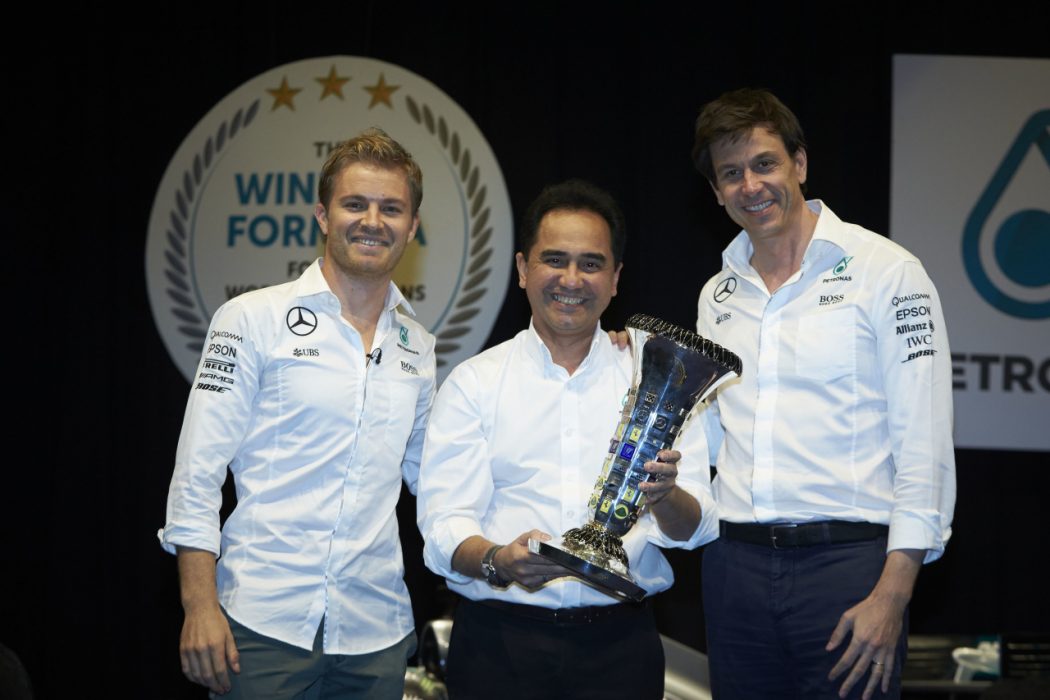 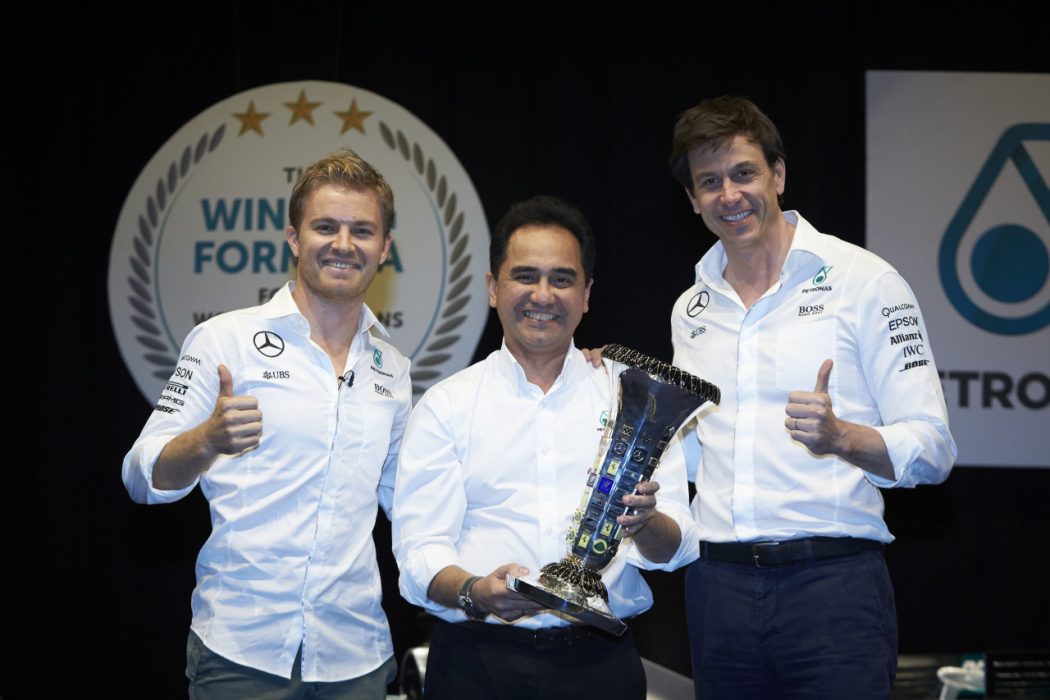 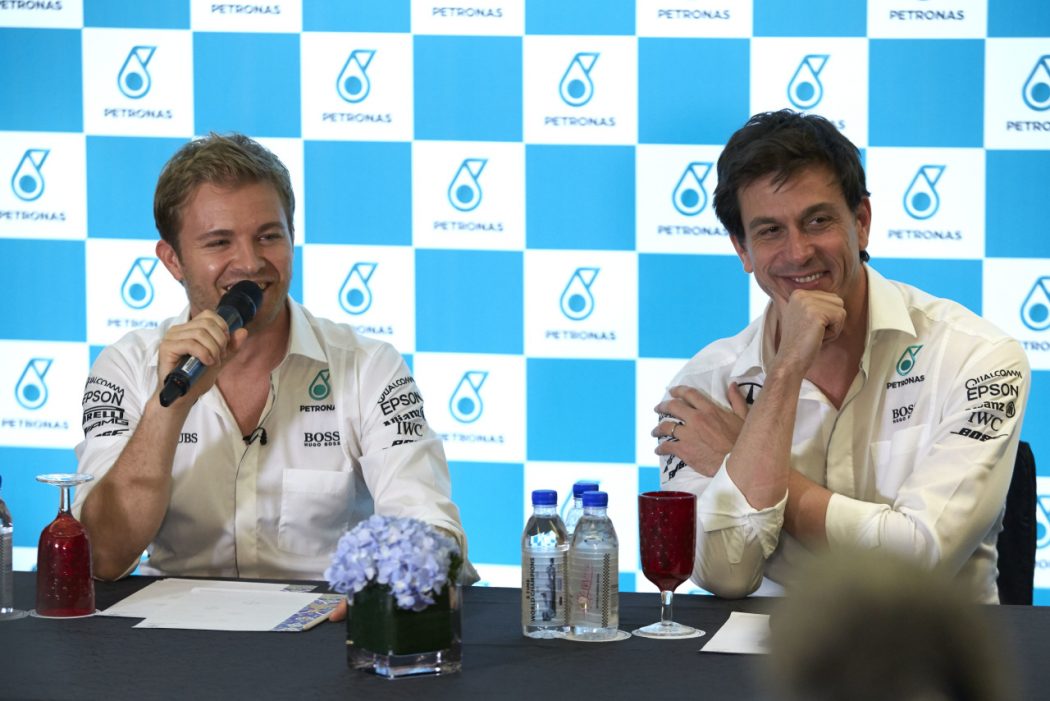 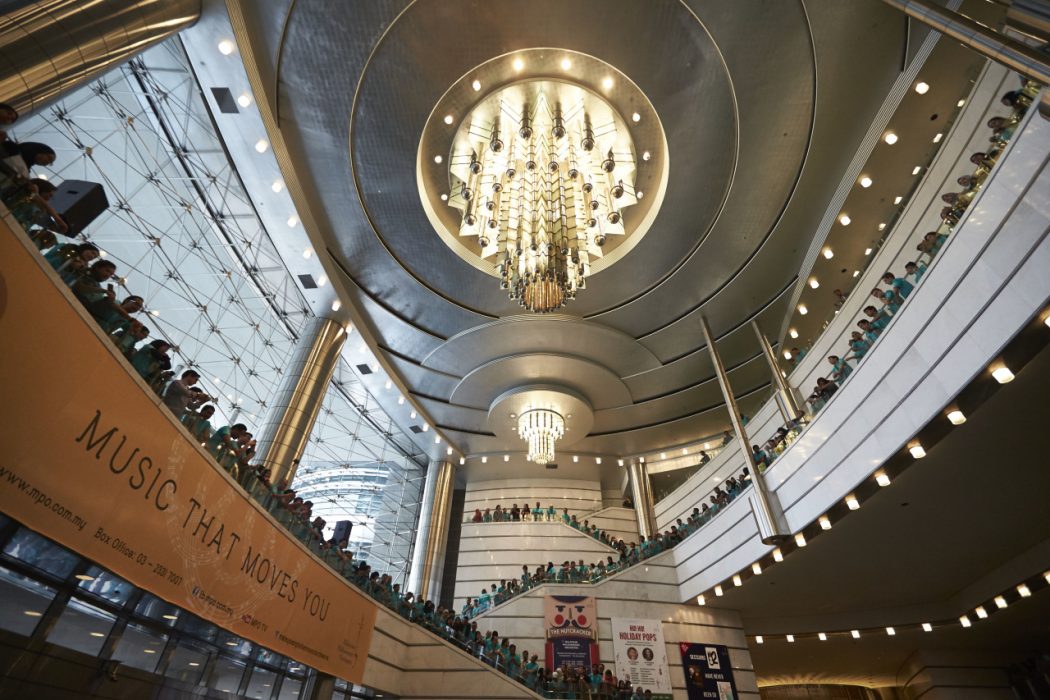 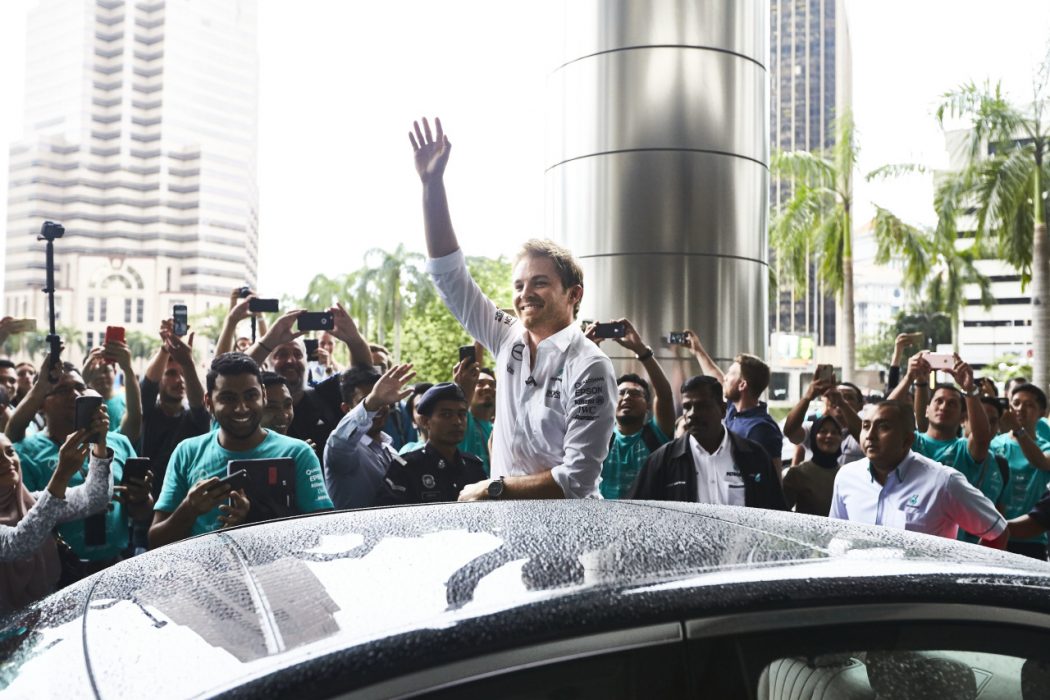 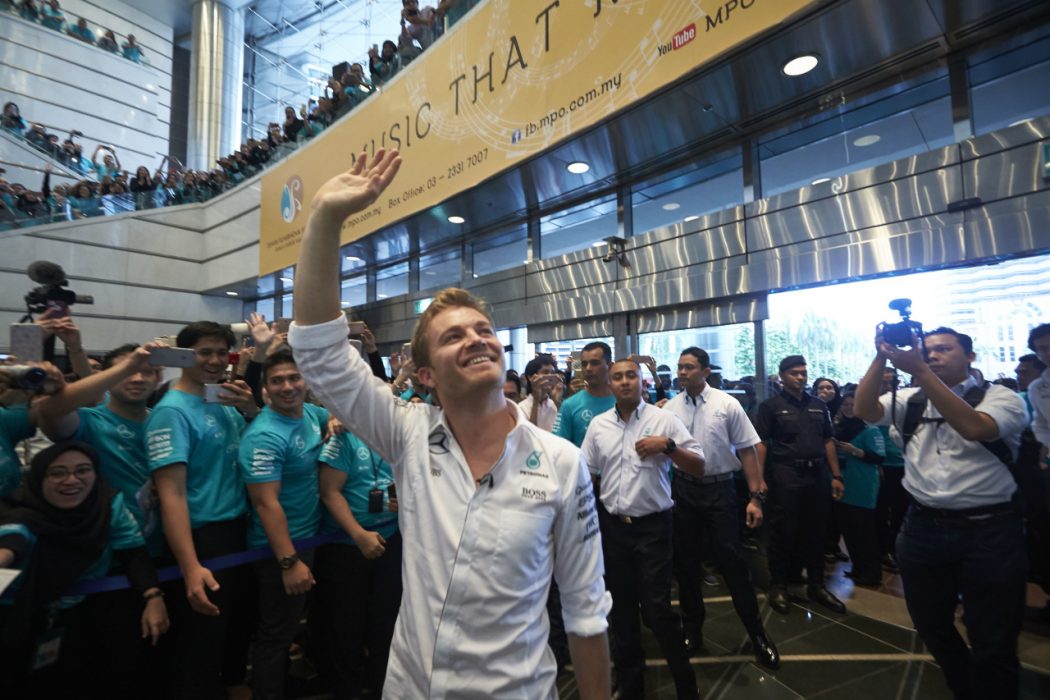 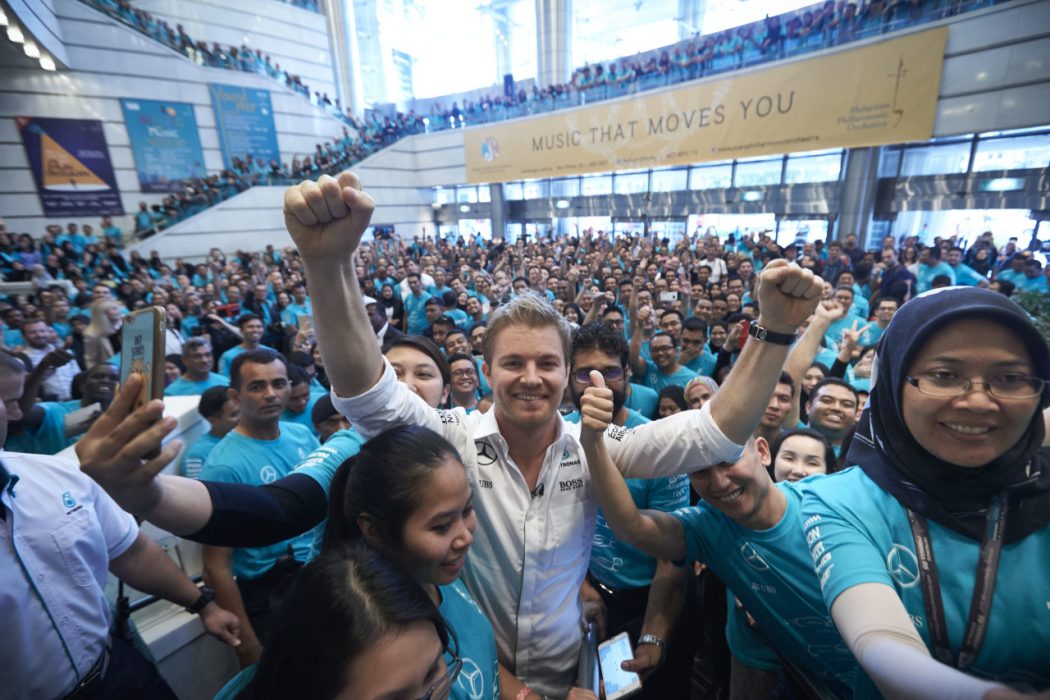 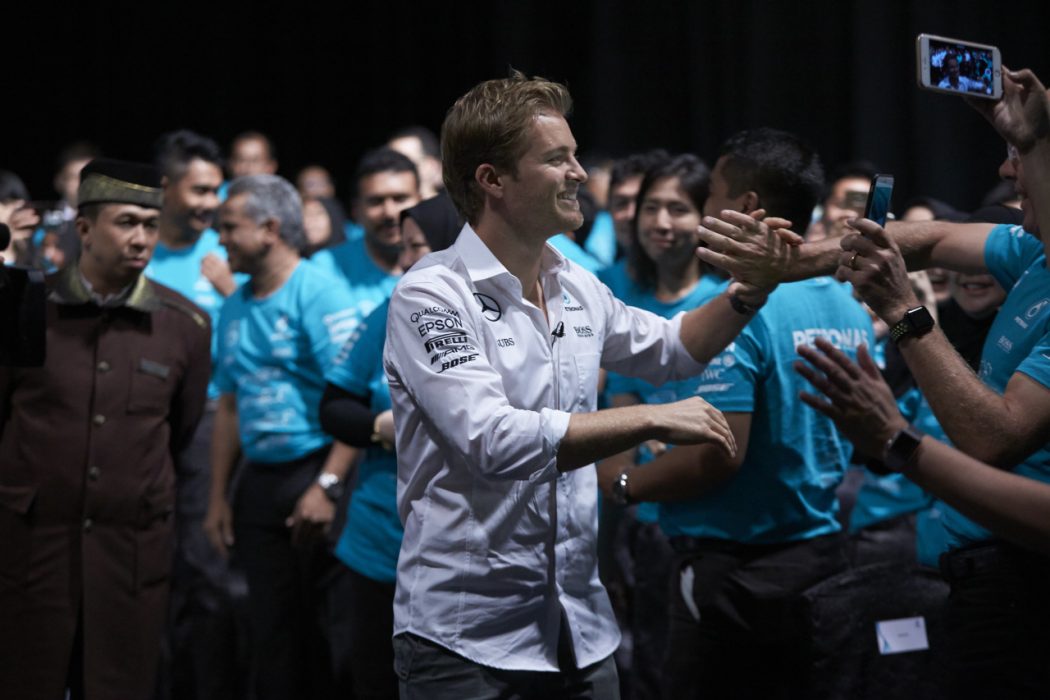 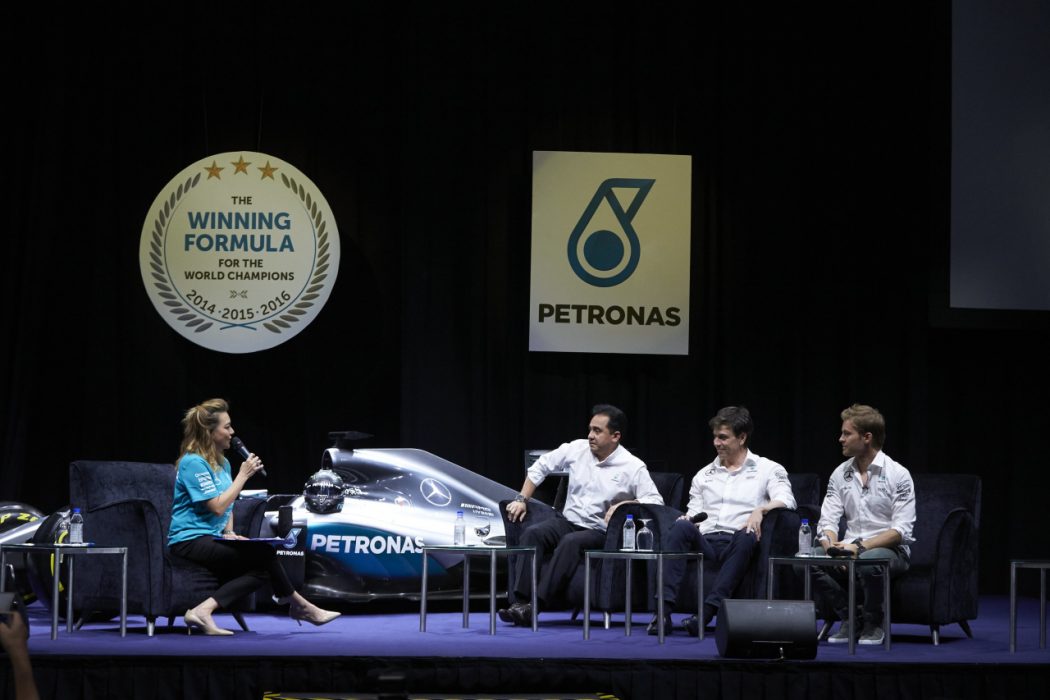 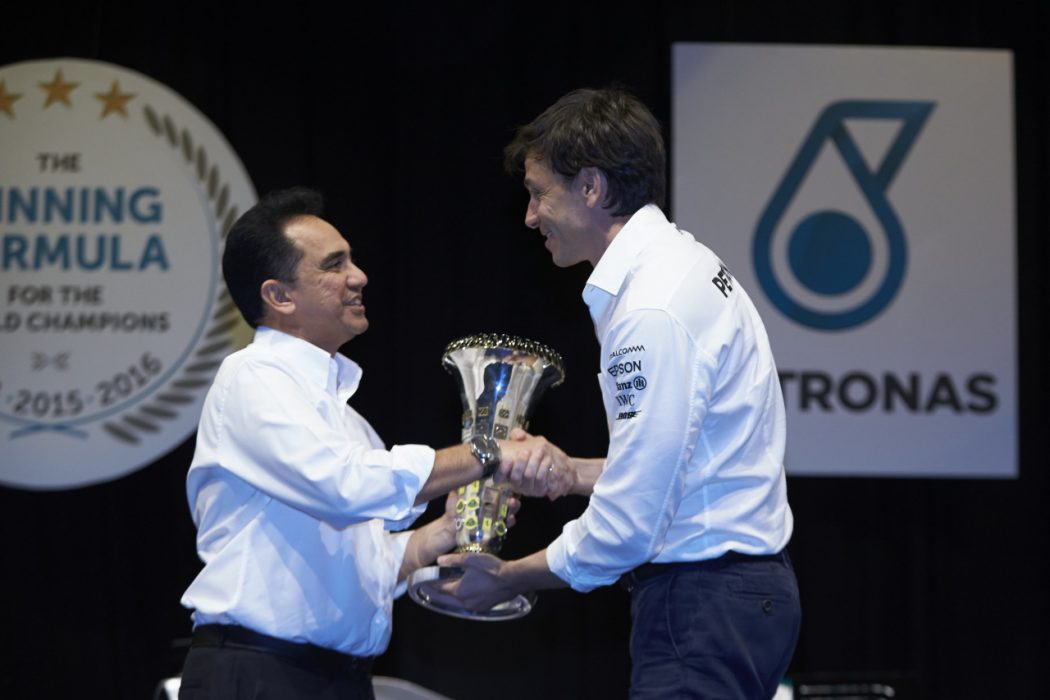 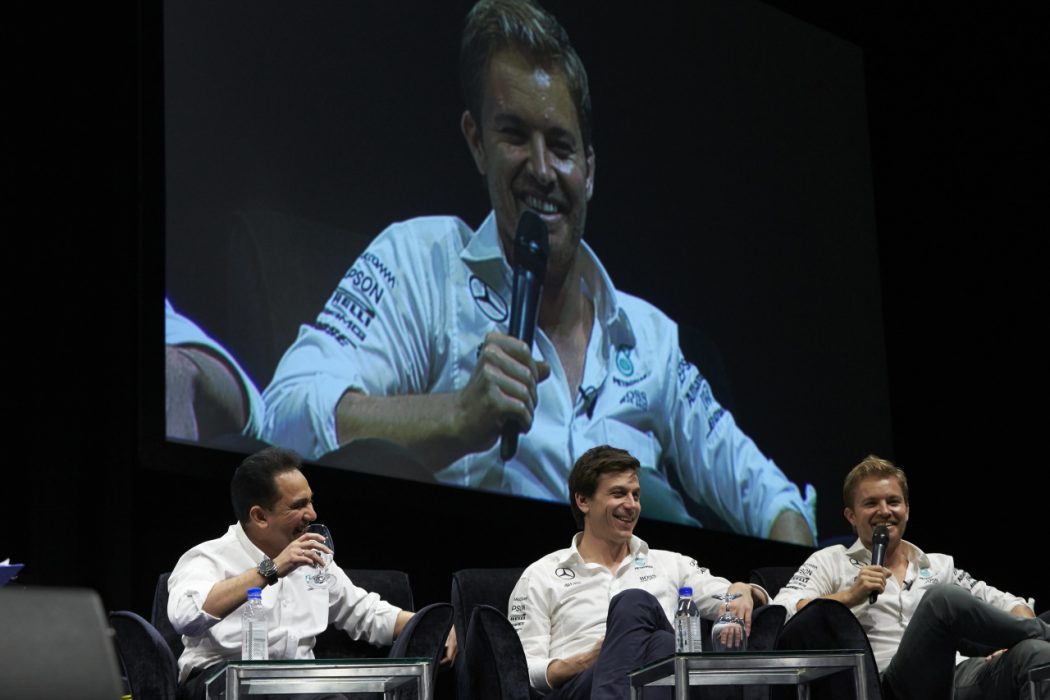 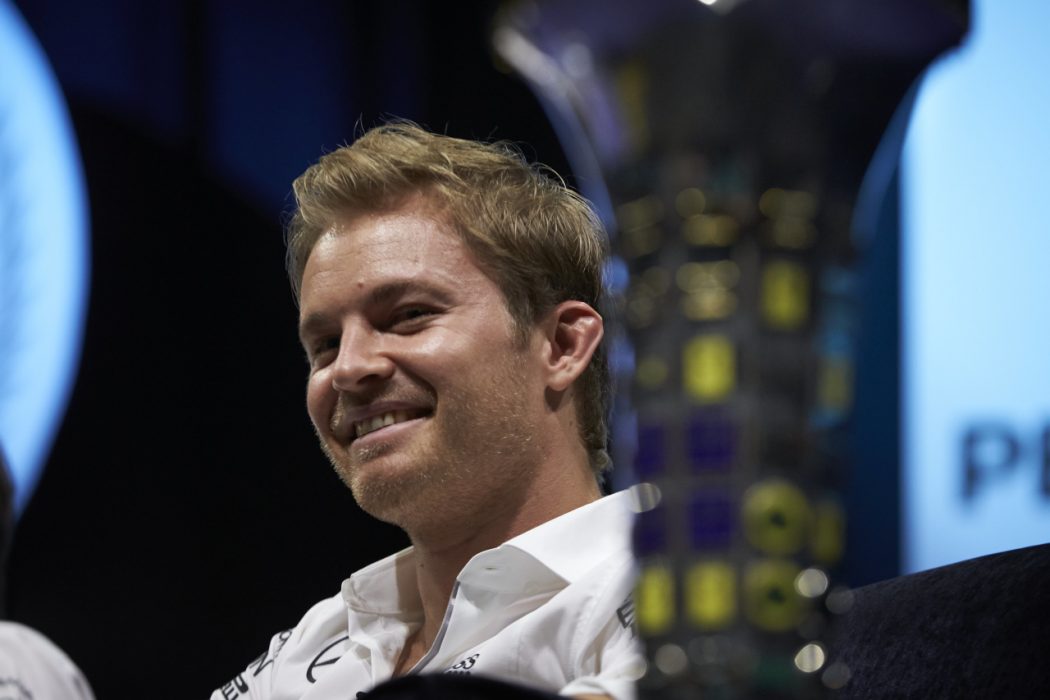 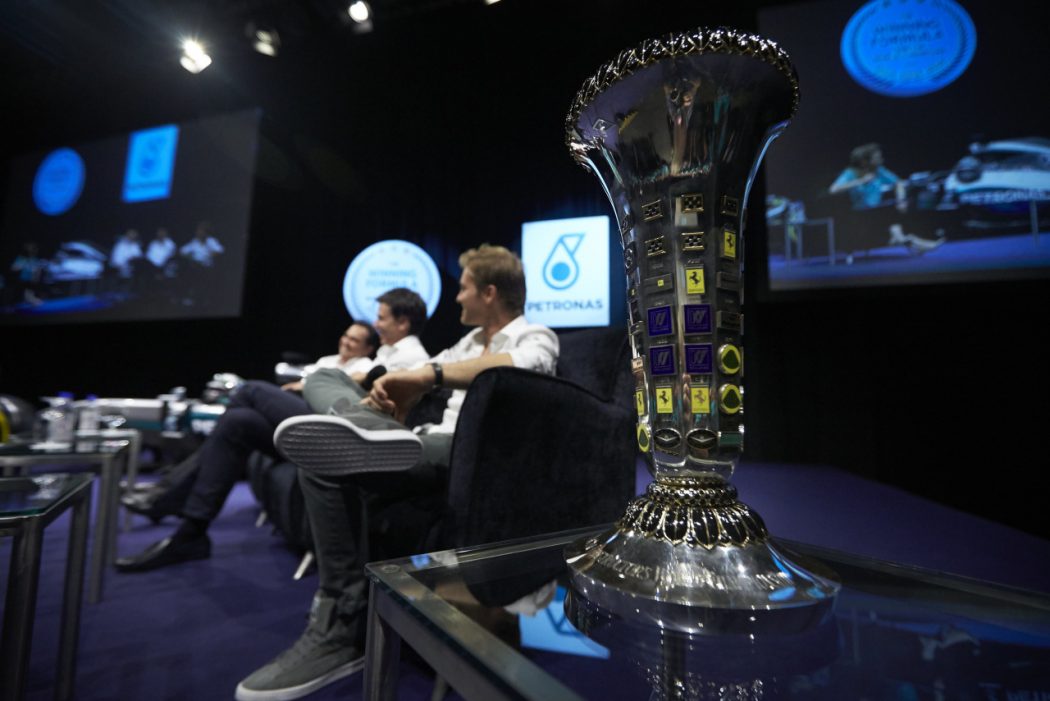 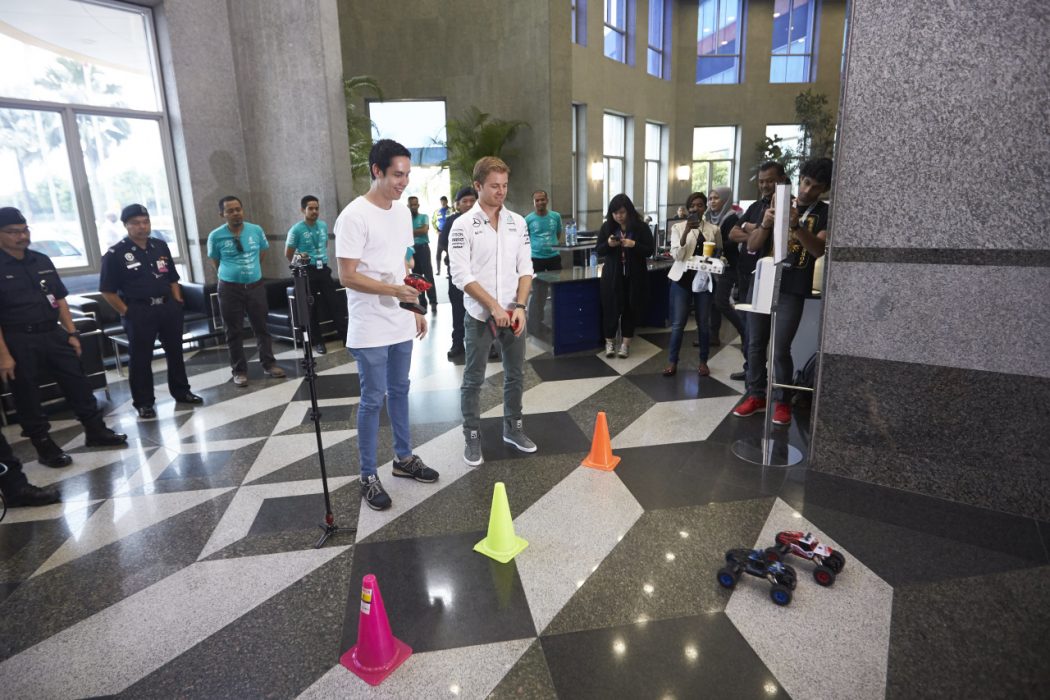 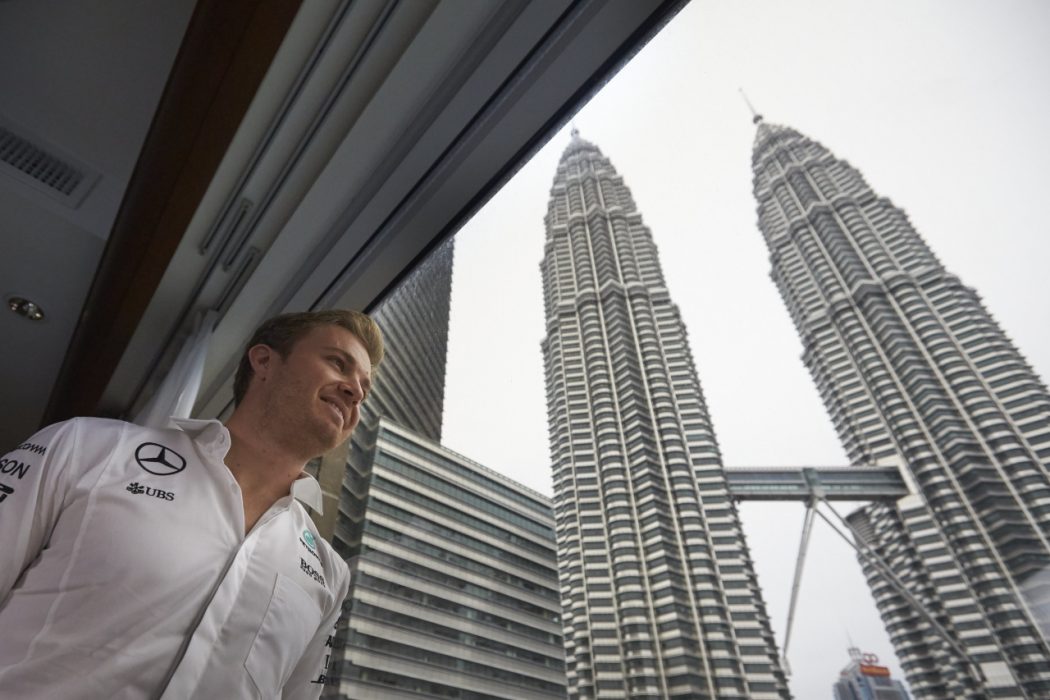 Ahead of the FIA Prize giving ceremony in Vienna, Austria, on Friday when he will be officially crowned, 2016 Formula One World Champion-elect Nico Rosberg yesterday touched down in Kuala Lumpur, Malaysia, on the first stop of a whistle-stop global celebration tour.

Fresh from his triumph and celebrations in Abu Dhabi, Nico made the home of the team’s title partner Petronas his first destination to celebrate his maiden world title.

He was joined by Head of Mercedes-Benz Motorsport Toto Wolff, in honour of the team’s third consecutive World Constructors’ Championship, and President and Group CEO of Petronas, Datuk Wan Zulkiflee Wan Ariffin.

The undoubted highlight of the day was a remarkable reception from Nico’s Malaysian family, his colleagues at Petronas, in the foyer of the Petronas Twin Towers.

Walking into the foyer of the company headquarters, Nico was greeted by thousands of employees chanting his name in celebration of World Championship victory – and he acknowledged their contribution to his success with the simple accolade: “Our championships are your championships, too, and we have achieved this together.”

He then continued: “The last 48 hours have been full of some unbelievable emotions and that was another real highlight for me – I wasn’t expecting it at all and it just completely blew me away! Incredible and wonderful to see. It’s been a pretty intense few days: I’m pretty tired after some hard partying in Abu Dhabi and I’ve got a few bruises, too, from how hard we celebrated with my friends – but it’s just an amazing feeling to think I have achieved that childhood dream and I am World Champion.

“I have been working towards it since 25 years, my whole life, and it was extremely intense out there on Sunday, touch-and-go at times and it could have been really hairy to lose the championship. But afterwards, it was amazing to share it with everybody, especially with the team. Mercedes is my racing family in F1 and we have been in this together since day one in 2010, just like Petronas – and now we are the best in the world. My best friends came out to Abu Dhabi to surprise me and then, of course, my parents too. It’s one of the most emotional parts of it to achieve what my Dad did 34 years ago. My parents had prepared a video of me during my very first couple of days in a go-kart which I had never seen before; when I saw it on Sunday night on social media, I cried my eyes out, thinking of the support from both my parents across all those years.

“I owe some words to Lewis, too. He’s one of the best in the world, one of the best ever surely, so it’s incredibly intense to race him. It feels like we’ve been doing it forever and he’s always edged me out ever so slightly, so to finally get one back was awesome. I’ve got great respect for him because he does an incredible job, he’s done so well over the years and he fought to the very last metre on Sunday. That made it extremely tough on Sunday but all the more beautiful afterwards.”

Head of Mercedes-Benz Motorsport Toto Wolff continued: “Having celebrated the Constructors’ Championship back at Brackley and Brixworth a few weeks ago, it felt only right that Kuala Lumpur should be our first stop after Abu Dhabi. Our friends at Petronas have played a huge part in the success of the past three years and these titles belong just as much to them. What started in 2010 as a marketing relationship has now become a deep-rooted technology partnership – particularly since the introduction of the Hybrid era in 2014. Their technologies are the lifeblood of this engine and I have rarely met more motivated, energised and ambitious people. As a group, we have now won World Championships with both of our drivers – something that was last achieved in the 1980s by McLaren with Senna and Prost. That kind of comparison makes a big statement about the hard work put into achieving these results by every single person at Brackley, Brixworth, Stuttgart and here in Kuala Lumpur – including, of course, both of our race drivers.

“When we first brought Lewis and Nico together as our driver pairing back in 2013, we made it clear that there would be no number one status for either of them – and they didn’t want that either. We knew we had two world class talents on our hands and that giving them equal opportunity to fulfil their potential would bring the best out of them. At the same time, we knew that this approach would sometimes give us some tough moments to deal with. It’s something we took into account and accepted as a challenge worth tackling. When you see the results we’ve had together, it’s clear that this is the right approach. One of the keys to our success has been that they constantly push each other – and that in turn kept raising the bar even higher. They are both born fighters and the intense competition has been good for them, for the team and for the sport.

I would also like to take this opportunity to congratulate Nico on his success this season. It is a great moment to welcome the next world champion in here at our headquarters, fresh from the final race in Abu Dhabi, and to be able to share our celebrations with him and with Toto.

“Finally, a word for Nico. I have seen the video he mentioned about his first laps in a go-kart and I found it pretty inspiring. When we see drivers here today in Formula One, we tend to forget about all the effort that has gone in to getting them where they are. When I see that little kid in a go-kart, 25 years ago, I realise once again what a long journey it has been for Nico and everything he has poured into achieving his dream. He has shown such commitment and drive to get where he is today and is a thoroughly deserving World Champion.”

Petronas President and Group CEO Datuk Wan Zulkiflee concluded: “Petronas is still a young company – we are just 42 years old – and not many people know that we have been involved in Formula One for the past 21 years. But it is the recent era that has been a really great story for us. We have seen a massive boost in media exposure; we have been the top energy brand in the sport in the past three seasons; but the thing that makes me most proud is that we have made a significant contribution through our Fluid Technology Solutions to the team’s achievement. Formula One works for our brand, it works for our products and it works for our people.

“I would also like to take this opportunity to congratulate Nico on his success this season. It is a great moment to welcome the next world champion in here at our headquarters, fresh from the final race in Abu Dhabi, and to be able to share our celebrations with him and with Toto. We have enjoyed three remarkable seasons of success and we are working harder than ever to meet the major new challenges of the 2017 regulations next year.”

After famously taking this season one race at a time, Nico has now found a new application for his rigid mental discipline. In the aftermath of a season comprising a record 21 races, he’s planning to take the coming weeks… one party at a time!