Our most eagerly awaited moment of the year has arrived as Scuderia Ferrari prepares to tackle the 1000th Grand Prix in its history. Not only that, but this milestone takes place at the Mugello Circuit, the facility owned by the Maranello marque, which gets to host a round of the blue riband category of motor racing for the very first time.

Historic. The Maranello marque has planned several initiatives, starting with a celebratory livery. Over the weekend, the SF1000s will feature a Burgundy colour, which is a faithful reproduction of the shade of red of the very first Prancing Horse car, the 125 S, and of the 125 F1 which took to the track in the Monaco Grand Prix on 21 May 1950. For the past 71 years, Ferrari has been ever-present in every year of the championship. Charles Leclerc and Sebastian Vettel will also have special race suits for this unique race and in this time of Covid-19, a limited number of fans – 2880 – will be allowed into the grandstands from Friday onwards, all socially distanced, a sign of confidence and renewal. The celebrations will spread to nearby Florence with an event in the heart of the city on Saturday evening. Then on Sunday, before the race start, Mick Schumacher, a Ferrari Driver Academy (FDA) student will take to the track at the wheel of an F2004 that his father Michael drove in his last championship-winning year: a fitting tribute to the Scuderia’s most successful car and its incomparable driver.

Reference point. Opened in 1974 as a natural evolution of the Circuito Stradale established in 1914, the track is laid out in the hills of the municipality of Scarperia and San Piero a Sieve. The Mugello circuit has long been one of the favourite circuits for drivers in all motorsport disciplines and has been owned by Ferrari since 1988. It is one of the few tracks to receive an FIA 3 Star level certification. In fact, the facility has exceeded the environmental tests established by the FIA, thus recognised for its excellent policies and sustainability.

Iconic corners. At 5.245 kilometres in length, Mugello is one of the most spectacular tracks in the world. The breaking point for the first corner, San Donato, is one of the most demanding on the track, coming at the end of a long flat-out straight. On the exit, drivers have to be ready for the esses made up of the Luco and Poggio Secco corners. A short straight lead to second esses, made up of Materassi and Borgo San Lorenzo, followed by a tricky sequence of two corners in the opposite direction, Casanova and Savelli. These are followed by the two most spectacular turns on the track: Arrabbiata 1 and 2. The second is particularly tricky because it goes over the top of a hill and it’s not easy to work out the best line to take. The next set of esses is made up of the Scarperia and Palagio corners. A short straight brings you to the long bend known as Correntaio after which there is the fourth quick set of esses made up of the Biondetti 1 and Biondetti 2 bends. The lap is nearly over apart from the Bucine corner, a 180-degree turn that brings you back to the start-finish straight. 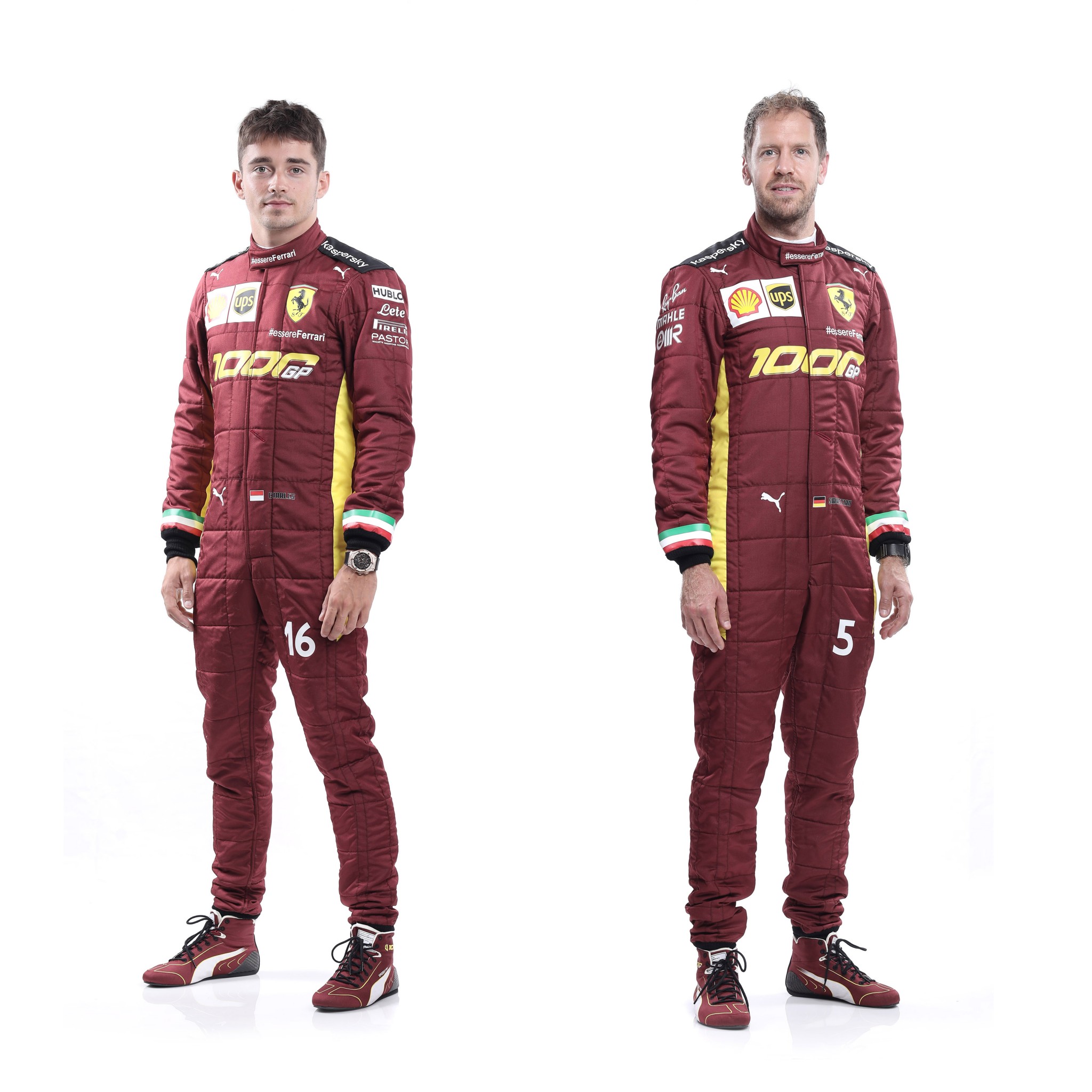 Scuderia Ferrari goes back to its roots with the livery for its 1000th GP.

“Scuderia Ferrari’s 1000th Grand Prix is a very important milestone, therefore it had to be marked in a special way. That’s why we decided to run a unique livery on the cars for this event, with the SF1000s taking to the track at the Mugello Circuit in the Burgundy colour first seen on the 125 S, the first racing car to carry the Ferrari name. Even the look of the race numbers on Charles’ and Sebastian’s cars will reflect the tradition of the past, giving the impression of being hand-painted onto the bodywork, while the drivers’ race suits will also match the car colour.
It’s a tribute to our origins: to our starting point for the amazing Ferrari story, characterised by an endless desire to compete, alongside the will to build road cars that are exceptional in terms of technology and design. Ferrari is unique in the world because the company has the soul of a car manufacturer and of a racing team, an inseparable link that is never questioned.
Only a few months ago, no one could have imagined that our thousandth race could take place at our own Mugello circuit. I am pleased that in the Grand Prix official name, Formula 1 chose to pay tribute to Ferrari, the only team that has always been present in the sport’s seventy-one-year history.”

“It’s a great honour to be driving a Ferrari in what is the 1000th Grand Prix for this, the longest-serving of all Formula 1 teams. It will be even more of a pleasure to celebrate this anniversary at the Mugello Circuit and also because, for the first time this season, a few spectators will be allowed into the grandstands.

It is a very nice and super technical track with changes of gradient and very demanding corners. The track should better suit our car, so let’s hope we can deliver something to please the Tifosi, both at home and at the circuit.”

“I can’t wait to be on track at Mugello with Ferrari. The circuit is really beautiful and on top of that, we are celebrating our team’s 1000th GP in Formula 1. I’m also pleased to learn there will be a few thousand fans in the grandstands.
The track has a very long straight, but it’s not super fast like the past two we raced on and so it should be a bit better suited to our car. It will be important to make the most of the track time available, as we have no data from which to start. We hope to put on a show for the people at home and those in the stands and also get back to picking up some good championship points.”

Last week, Scuderia Ferrari took part in the Italian Grand Prix. Unfortunately, it was an extremely disappointing weekend as it ended with both cars retiring. Sebastian had to pull out after just six laps with a brake system issue, while Charles Leclerc crashed heavily into the barriers at the Parabolica while he was in a virtual third place. Fortunately, he was uninjured.
On Monday the usual engineering debrief took place in which all the data from the Monza race was analysed. At the same time, preparations were underway for the Grand Prix at Mugello, although there is no particularly useful data available given that the test back on 23 June was carried out using a two-year-old car. The track shares some characteristics with Silverstone, even if the surface material and the nature of some of the corners make it completely different from any other venue. 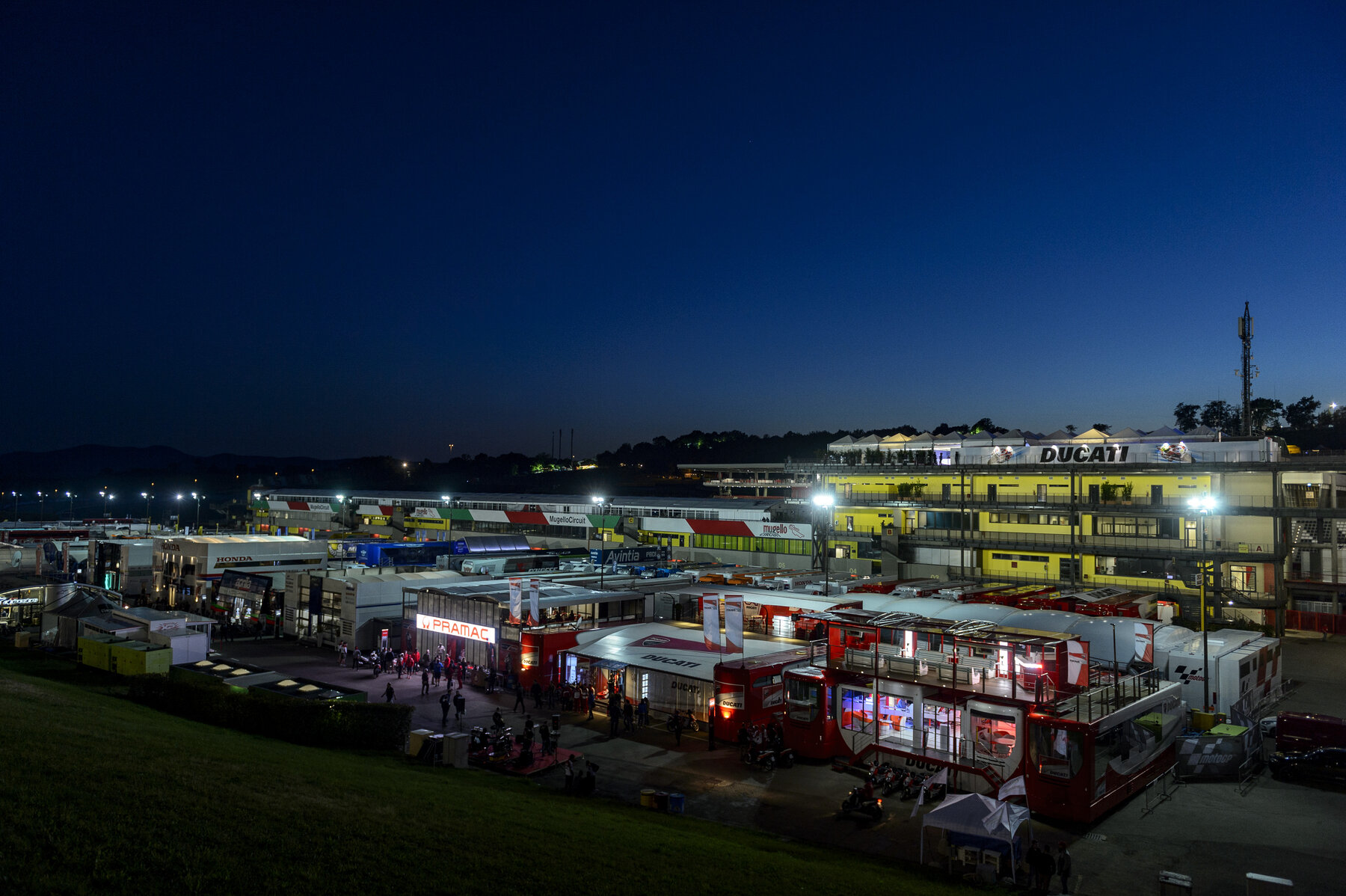