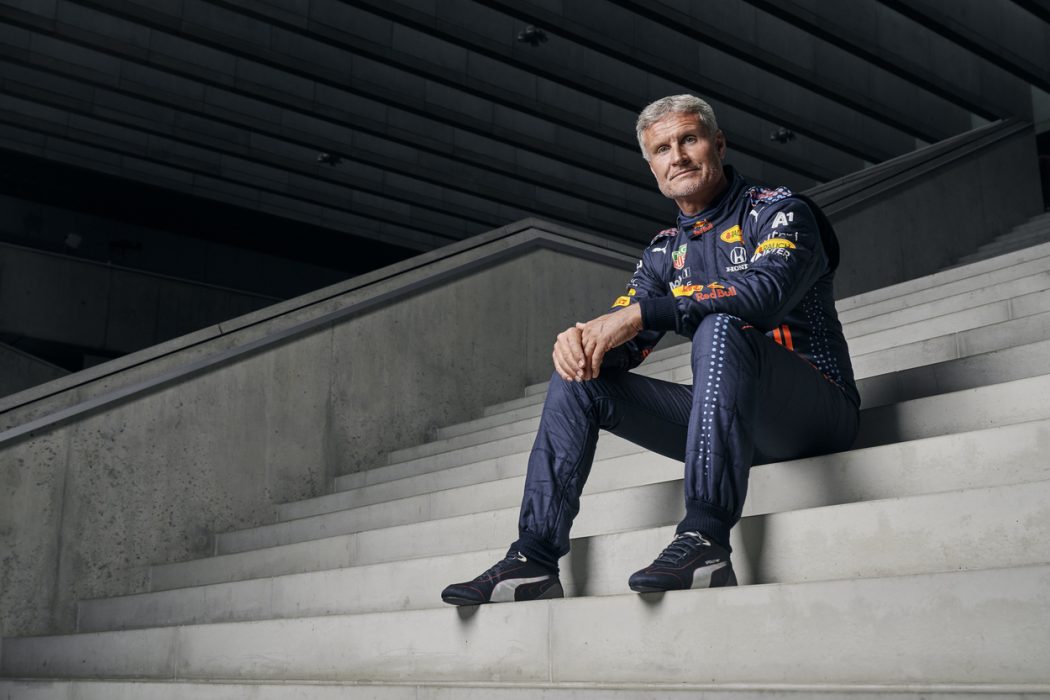 David Coulthard poses for a portrait during the filming of Czech & Slovak F1 Road Trip on May 10, 2021. 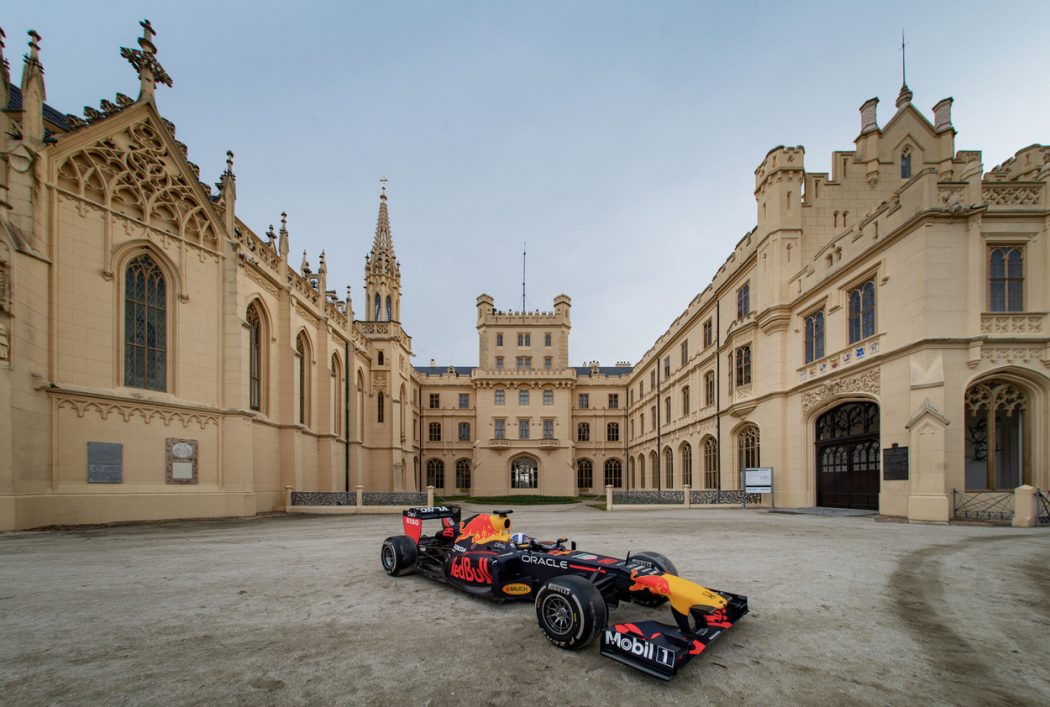 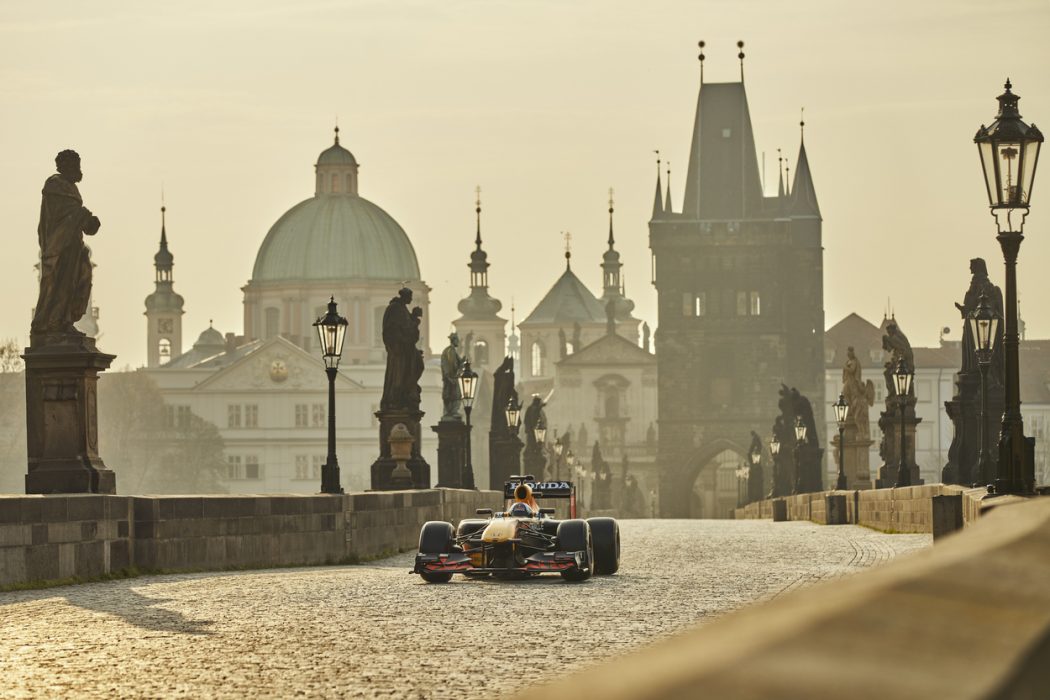 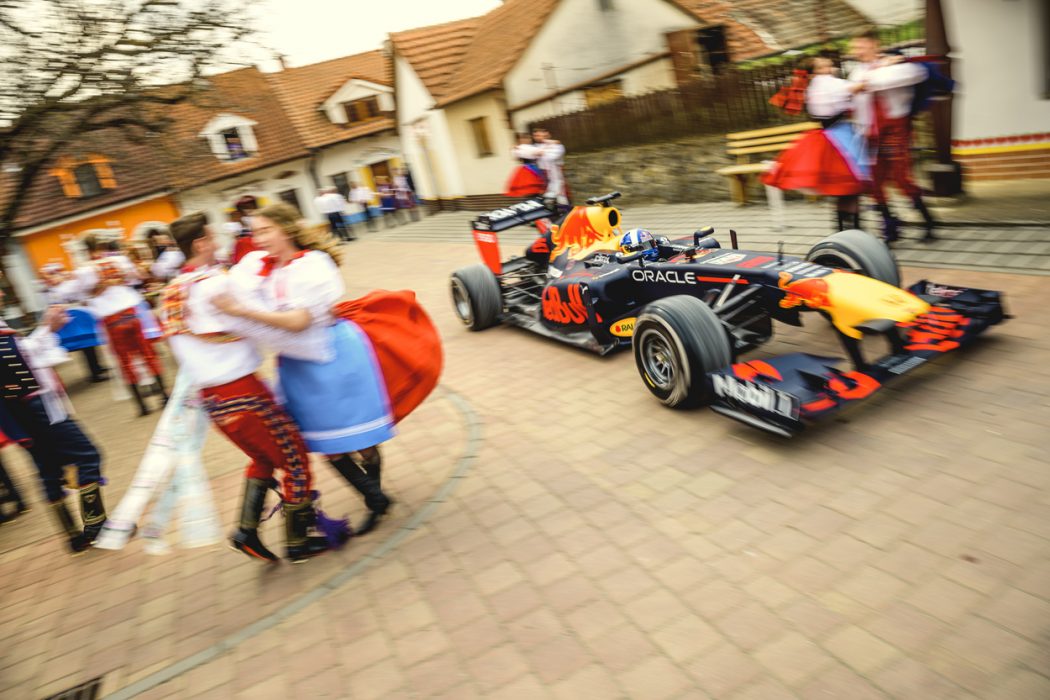 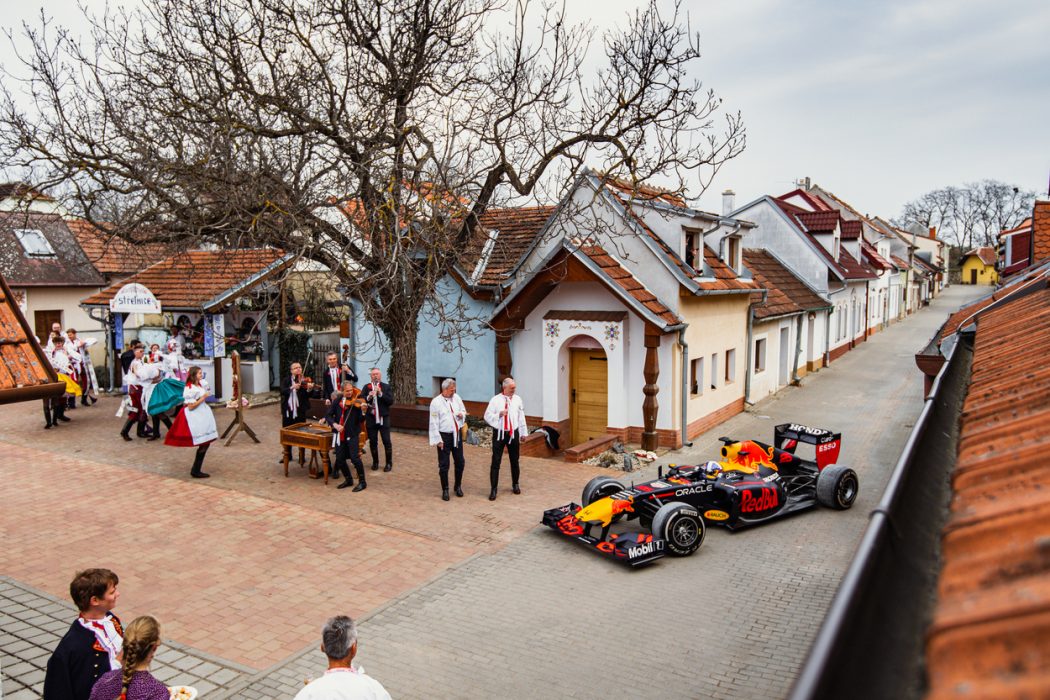 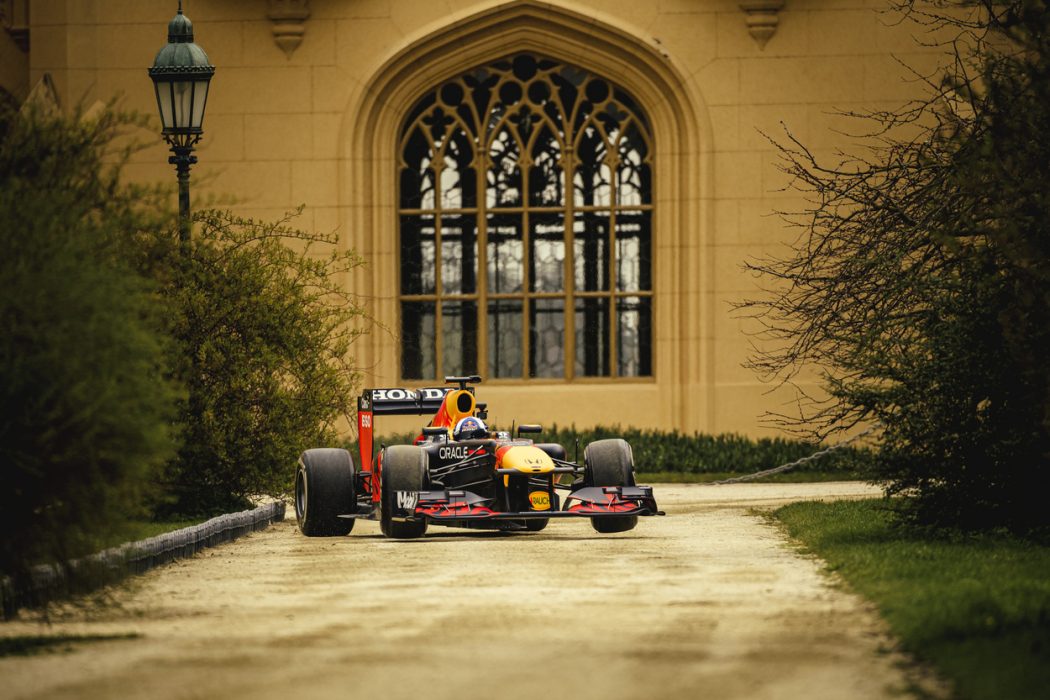 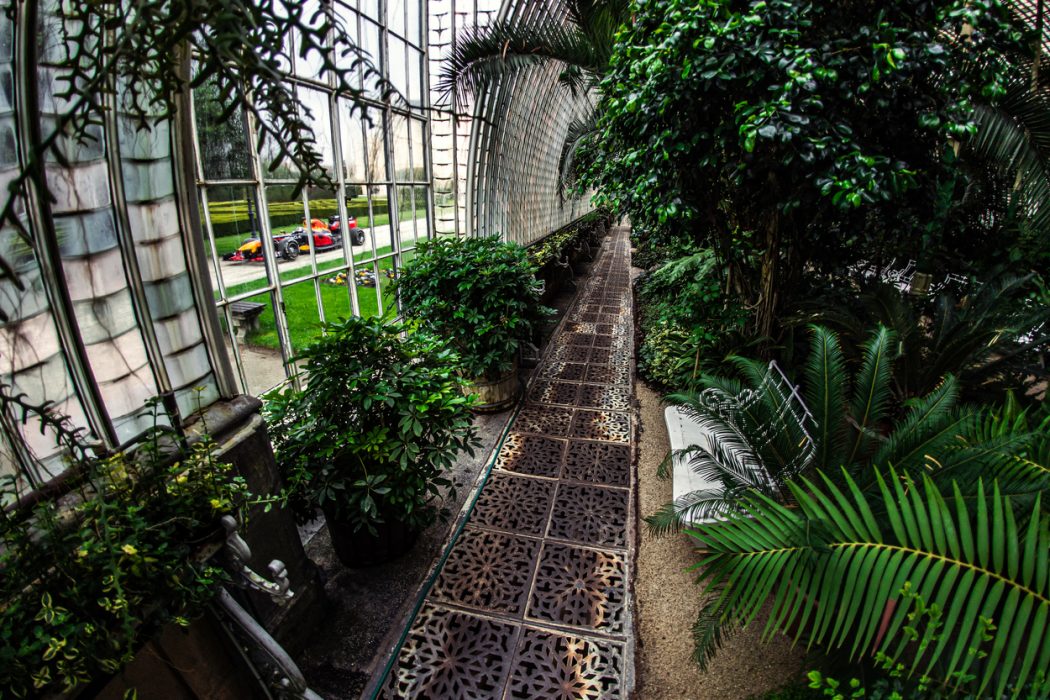 RB7 in action during the Czech & Slovak F1 Road Trip at the Moravian vineyards, Czech Republic on April 22, 2021. 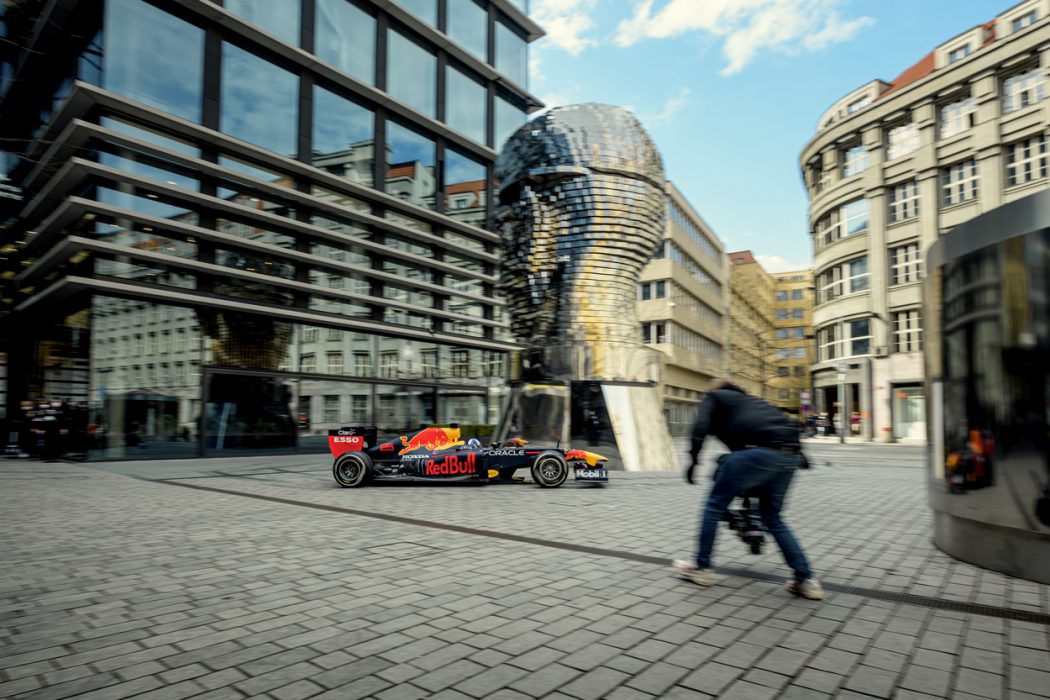 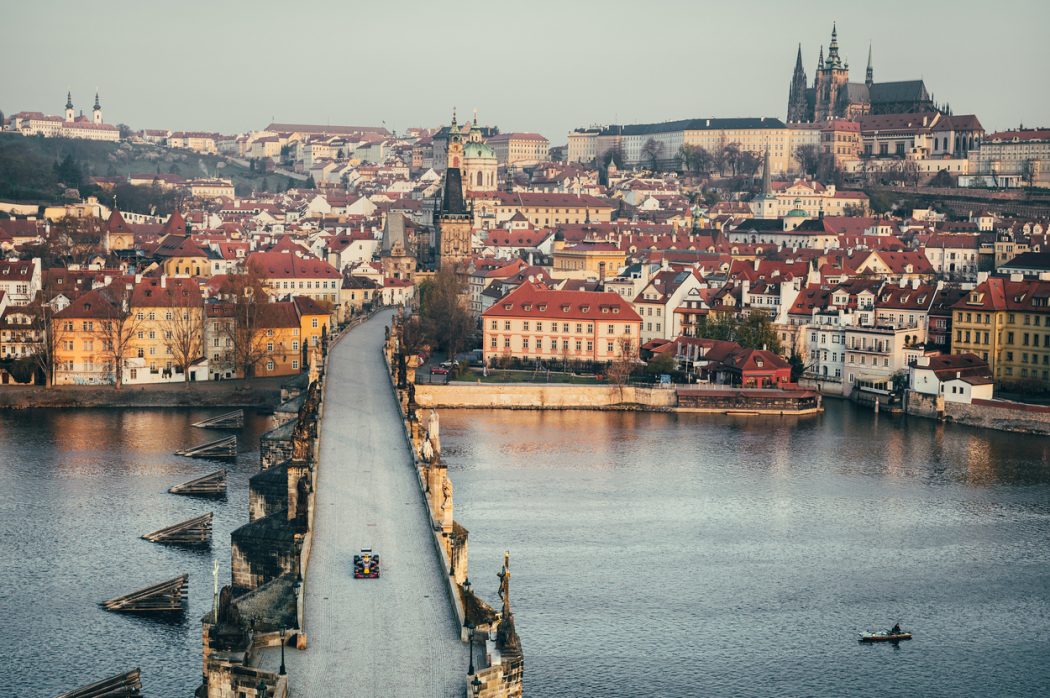 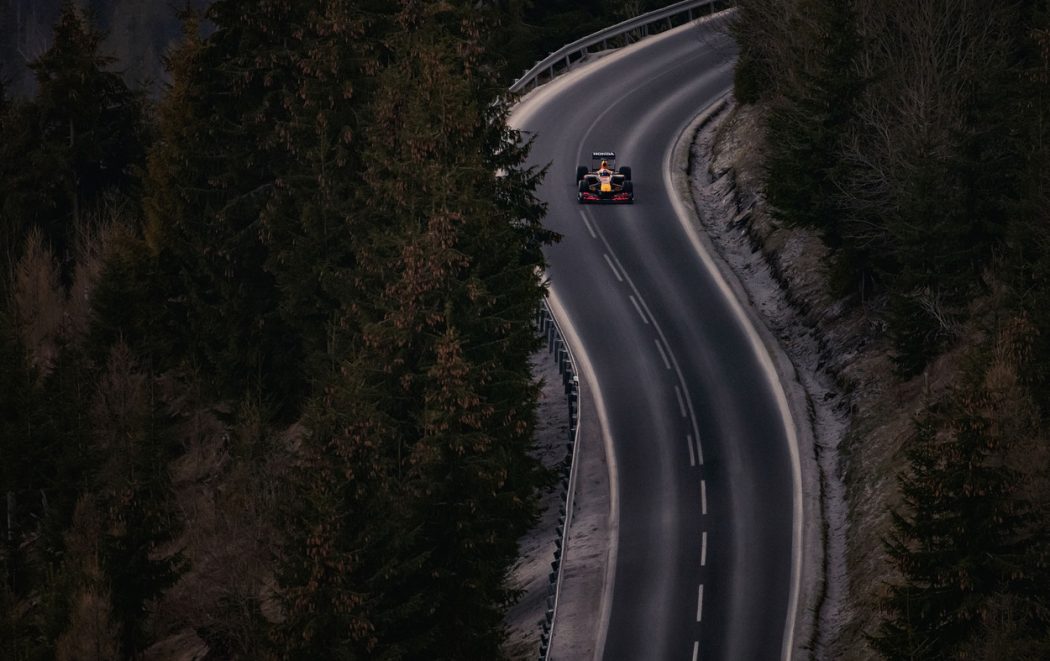 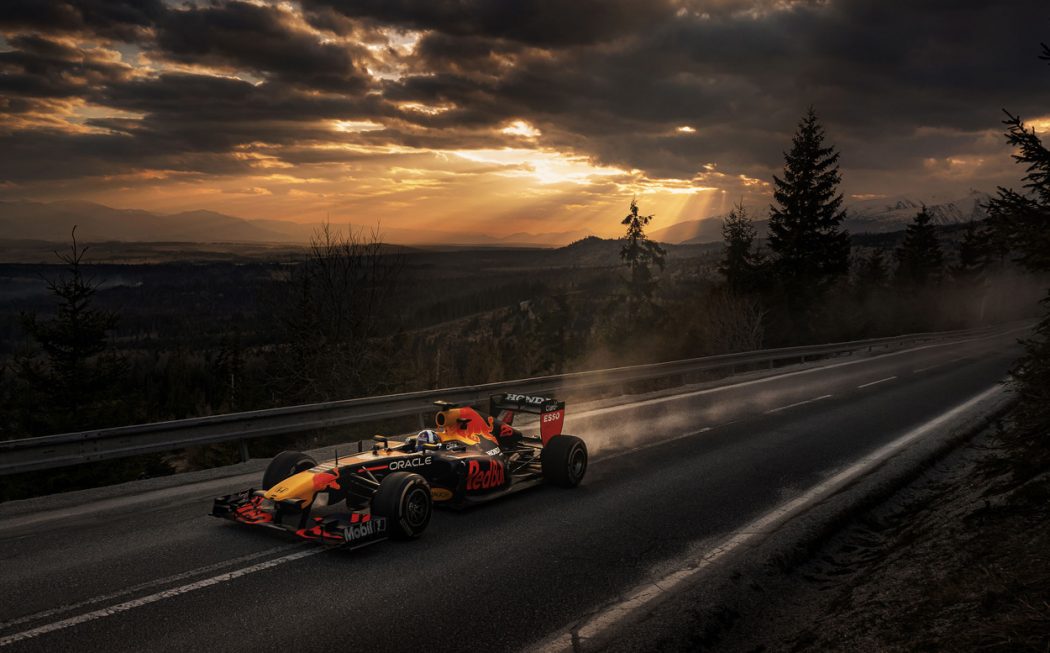 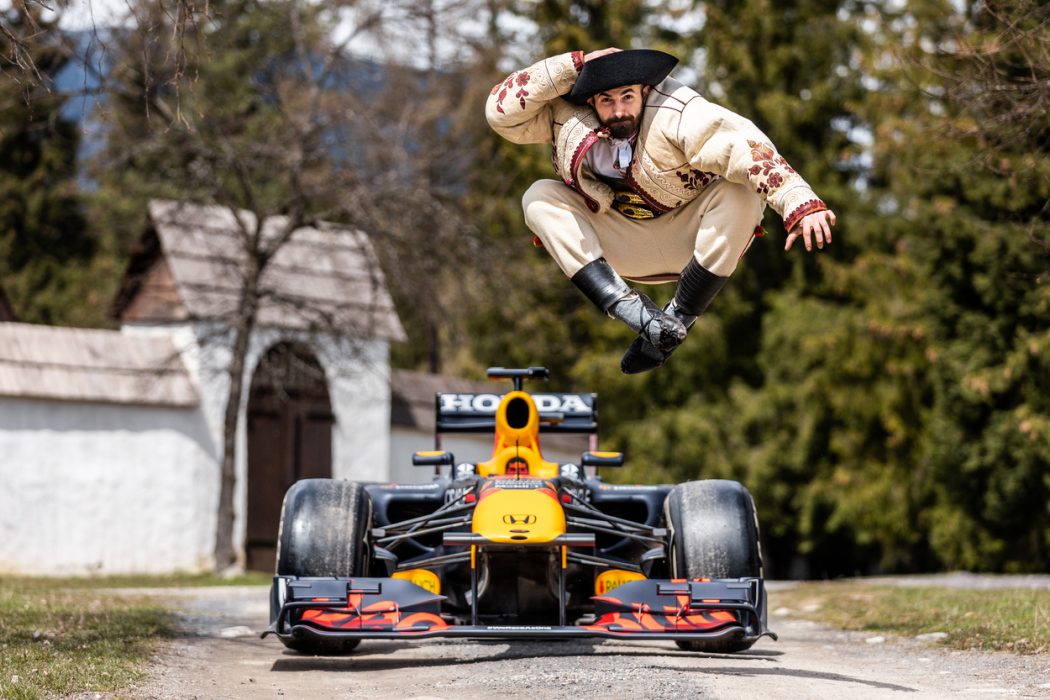 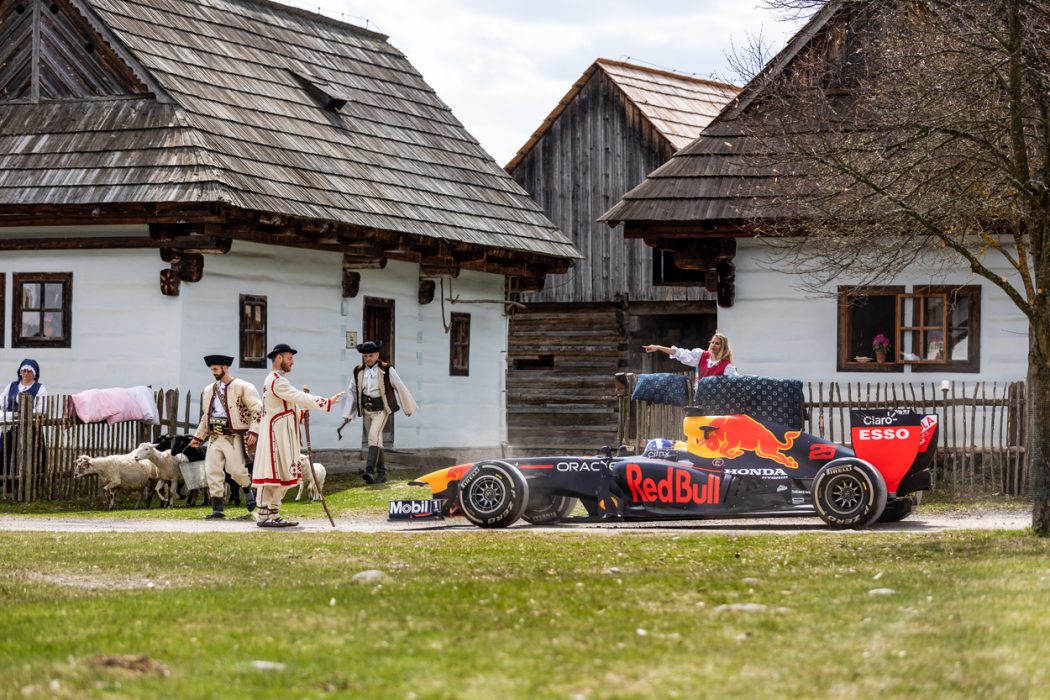 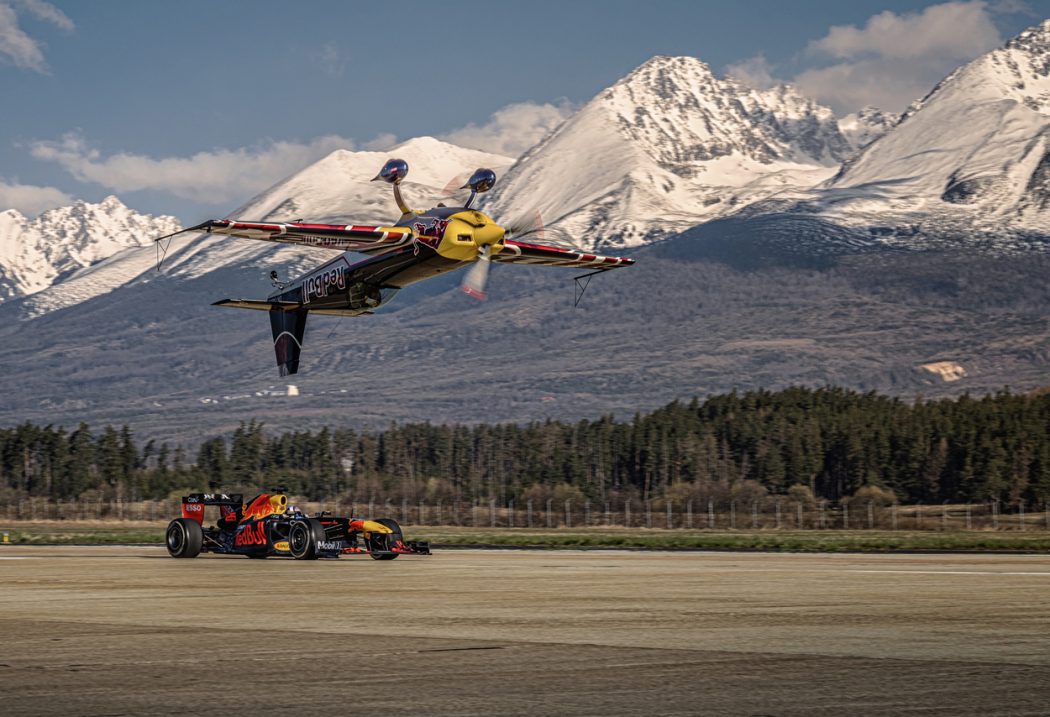 David Coulthard and Martin Sonka perform a stunt during the filming of Czech & Slovak F1 Road Trip in Poprad, Slovakia on April 26, 2021. 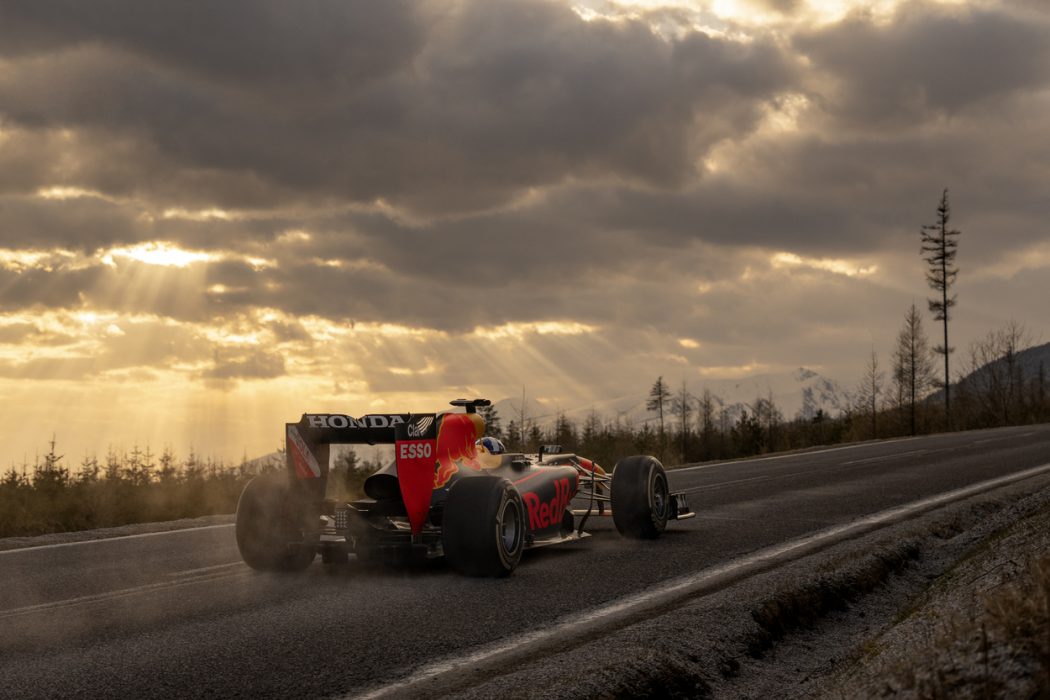 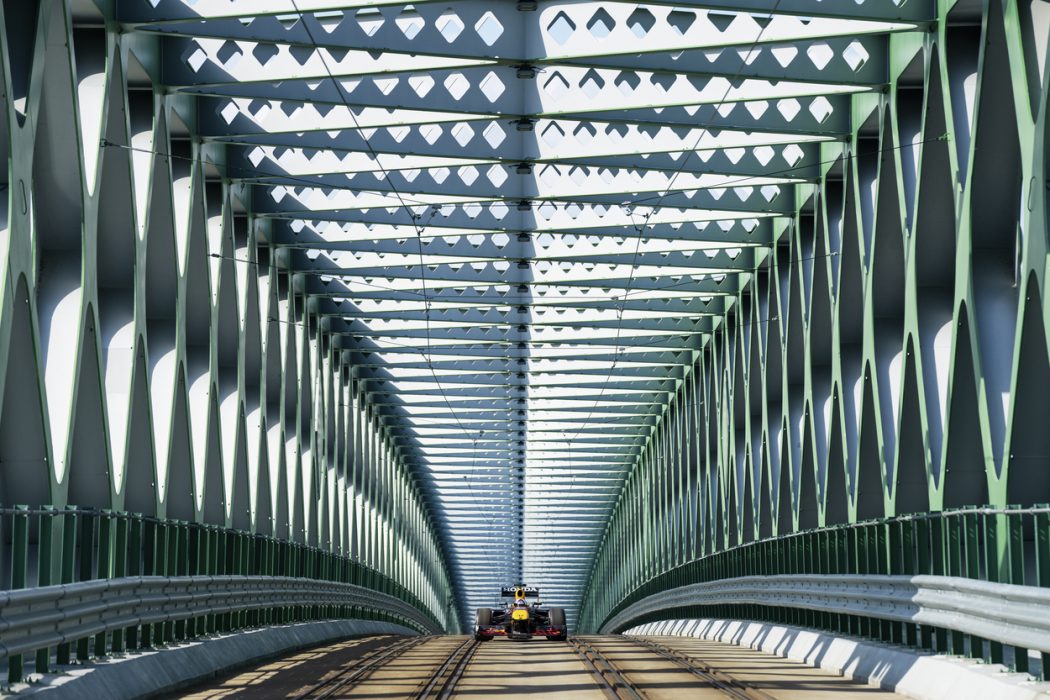 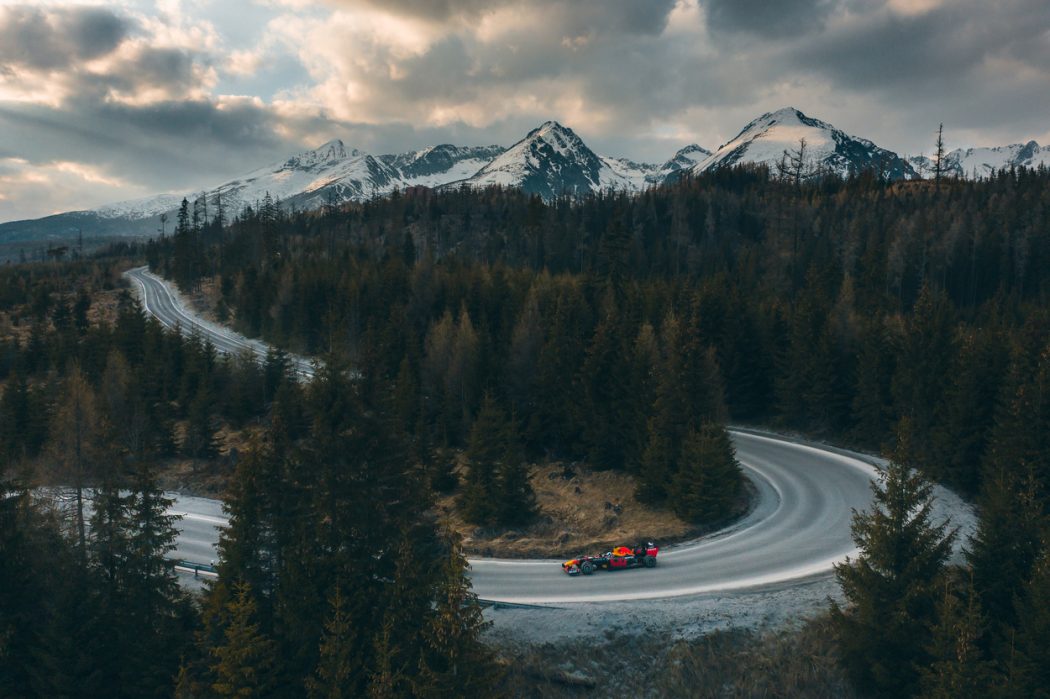 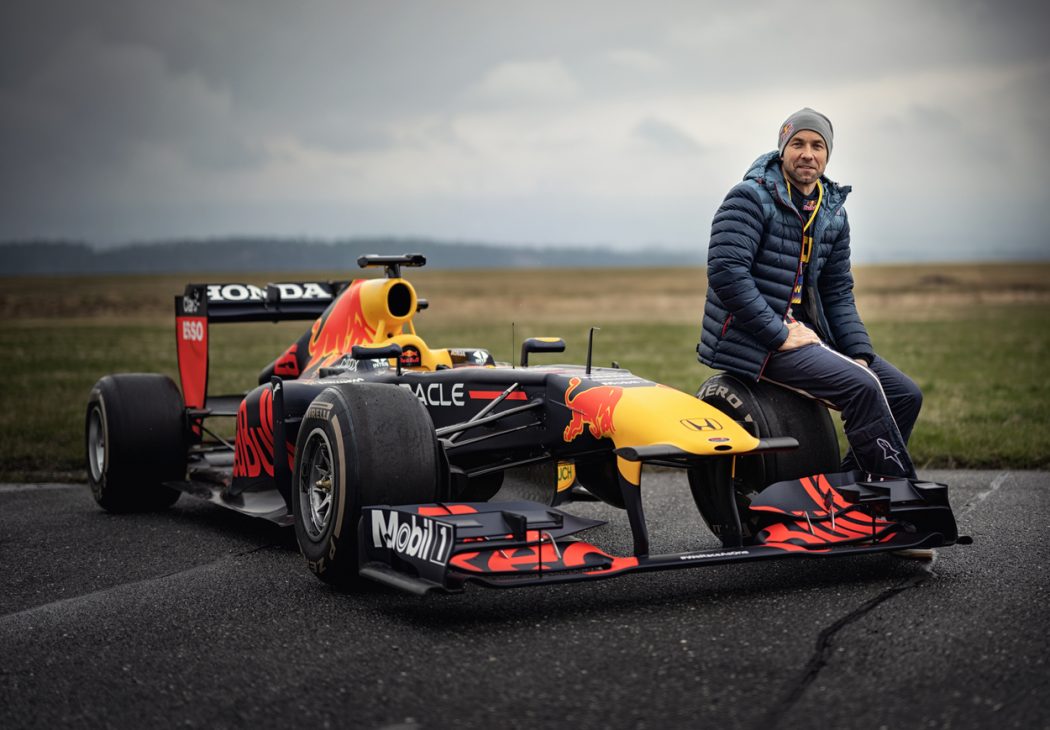 Martin Sonka poses with RB7 during the filming of Czech & Slovak F1 Road Trip in Poprad, Slovakia on April 26, 2021.

The world-first stunt was performed by Red Bull Racing, who has undertaken some pretty awesome Formula 1 road trips in their time. But the latest adventure might just top them all – by taking the double title-winning Red Bull Racing RB7 for a wild ride through the Czech Republic and Slovakia that culminates in a ‘world first’ stunt between the F1 car and an inverted Red Bull Race plane.

This was no ordinary battle of the pilots, however. While the RB7 hit top speed on the short runway in conventional style, 2018 Red Bull Air Race World Champion, Martin Šonka, took an alternative route, flipping his Extra 300 SR race plane onto is back for a heart-stopping full-throttle flight, inverted, just metres above our F1 car and with the drivers almost eyeball to eyeball throughout.

“The great thing about this film is that it’s all real,” says David Coulthard. “When the aircraft is just a few metres above the RB7 and upside down, that is real, that is the skill of Martin. It’s a professional right at the top of his game.”

But as Martin explains, the race was even more complex than either the F1 or the Air Race champion could have imagined. “We have both have very limited vision out of our cockpits and for me to fly at such a low level and inverted, I more or less need to look to the front to be able to control the height of the plane. The driver also has to look to the front but because of the head and neck restraint, F1 drivers use he can’t look up. So we solved the problem by placing a small mirror in front of him so he could see me and look to the front. It was incredible to fly in such a formation, plus I’m a big fan of Formula 1 so just seeing the car so close from the cockpit of my airplane was something really special.”

Castle to Castle is the latest in an ever-growing series of incredible road trips for Red Bull Racing Honda, and after recently crisscrossing the US, wheel-spinning through the streets of Amsterdam and thundering across the 15 July Martyrs Bridge in Istanbul, the Team’s latest adventure saw the Red Bull Racing RB7 embark on a high-speed tour of the Czech Republic and Slovakia.

Starting at the world-famous Prague Castle and taking in a flat-out blast across the Charles Bridge, the tour sees 13-time Grand Prix winner David Coulthard power through the scenic vineyards of the Moravia region and onto Slovakia’s beautiful capital Bratislava before heading to Proprad Airfield for the ultimate speed showdown – a flat-out race against Martin Šonka.

Former Red Bull Racing driver David Coulthard was also blown away by the breathtaking scenery of the two countries admitting: “I really enjoy the fact that I have the opportunity to showcase the Formula One car across different countries and here in the Czech Republic and Slovakia we’re on cobbled streets and dusty tracks and some beautiful scenery in the mountains. It’s been incredible and Castle to Castle has been like a journey of discovery for me as well as a showcasing what a Formula One car can do off-track.”