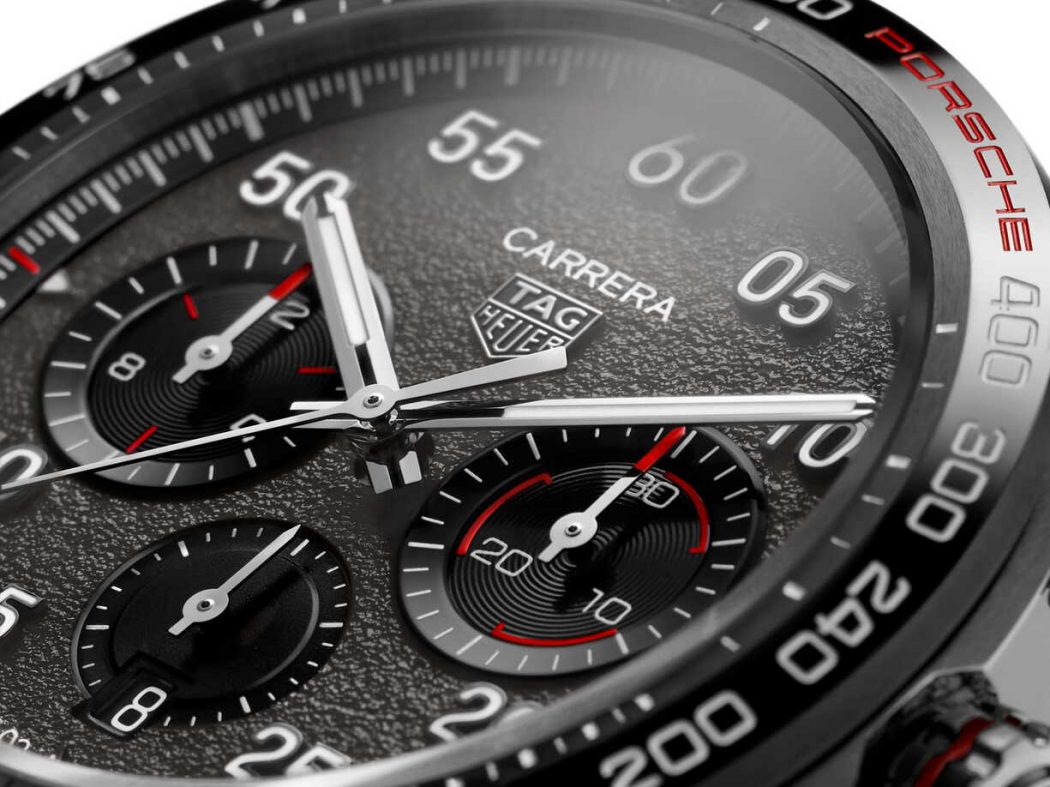 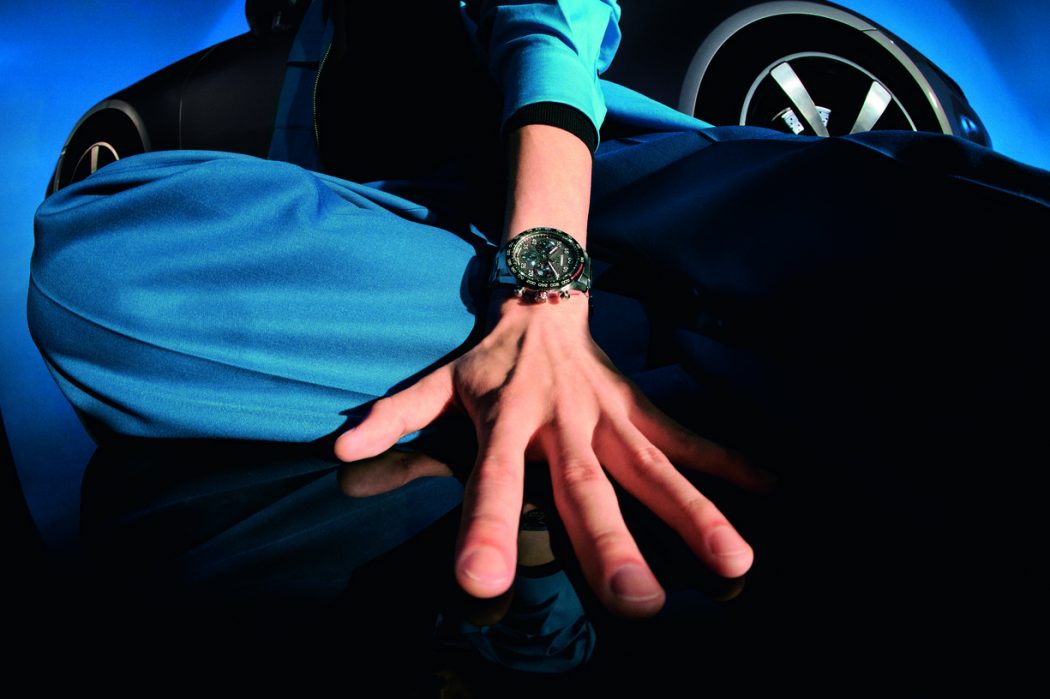 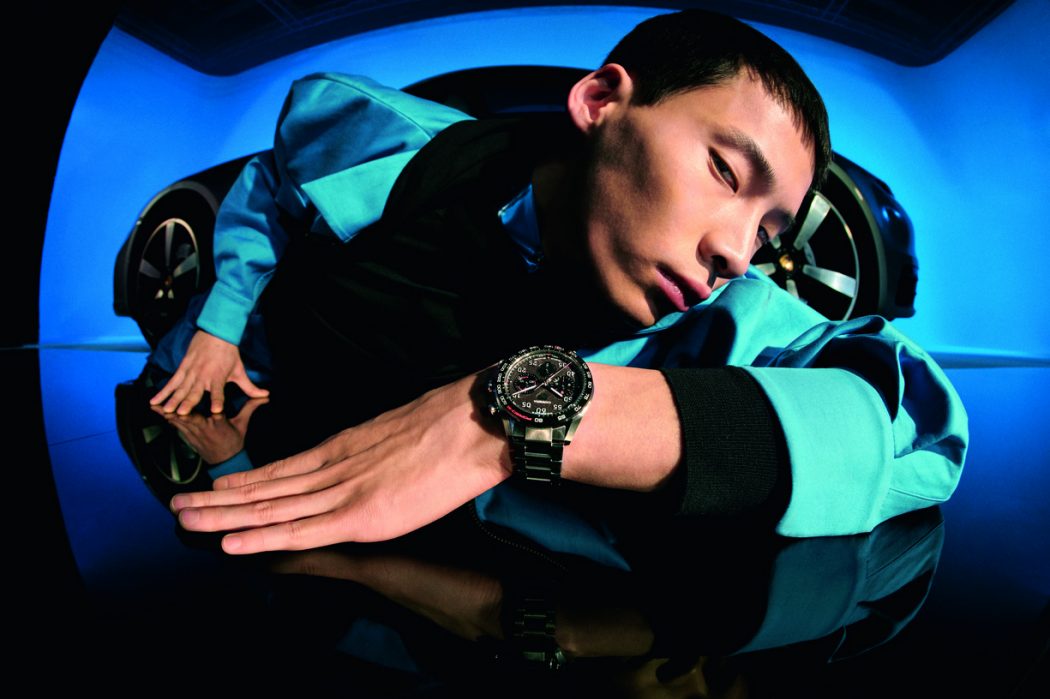 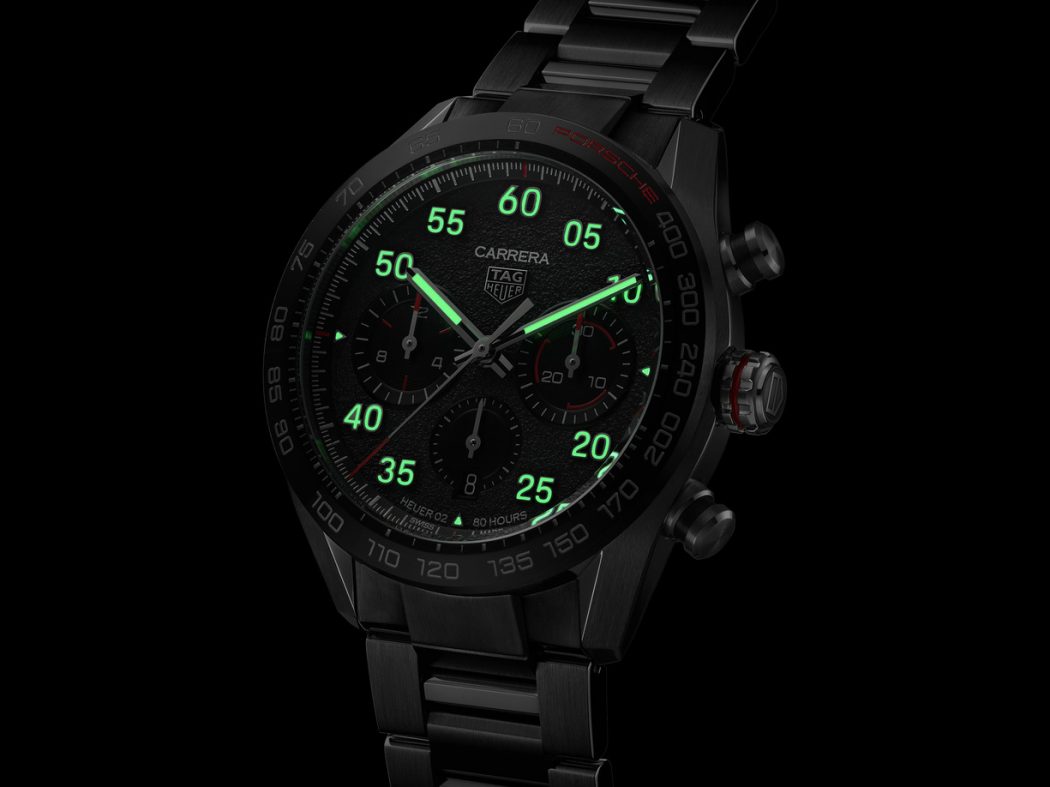 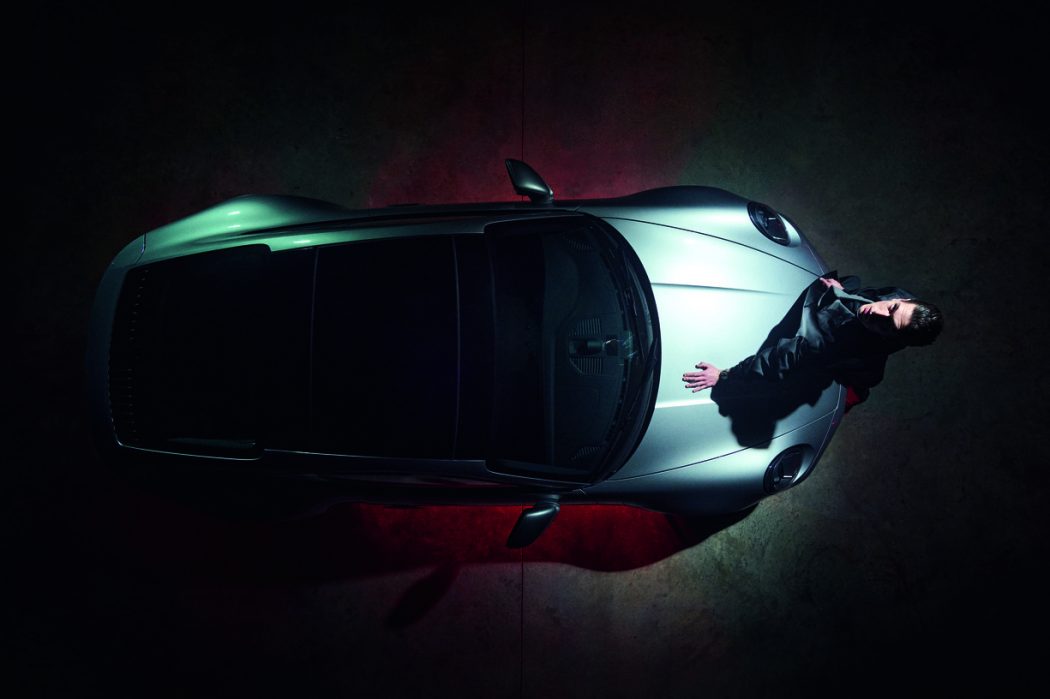 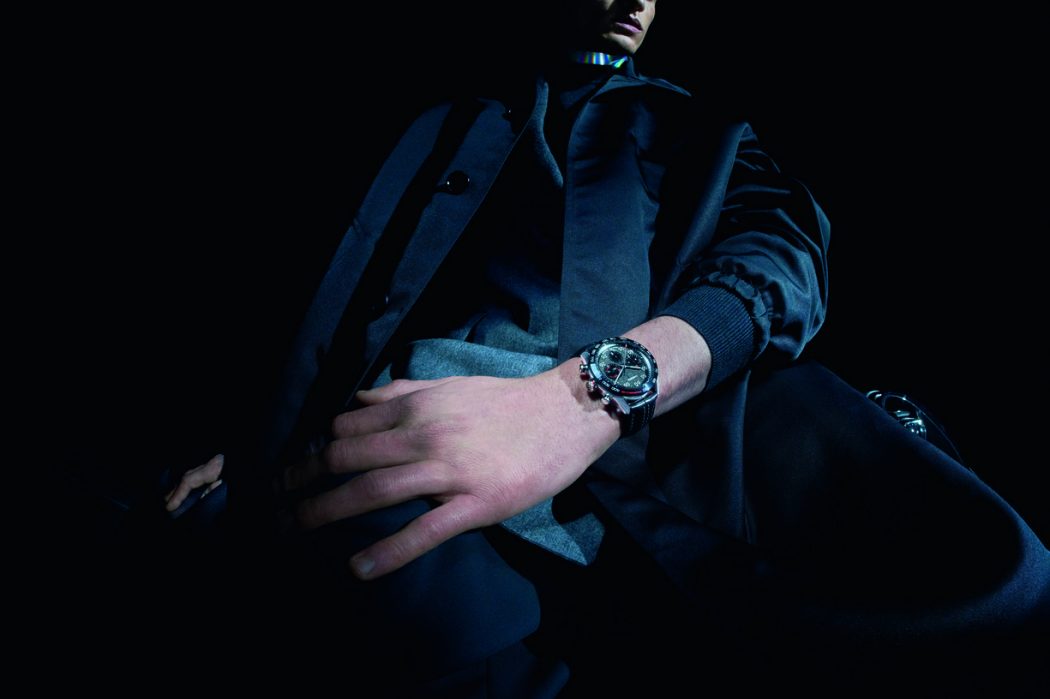 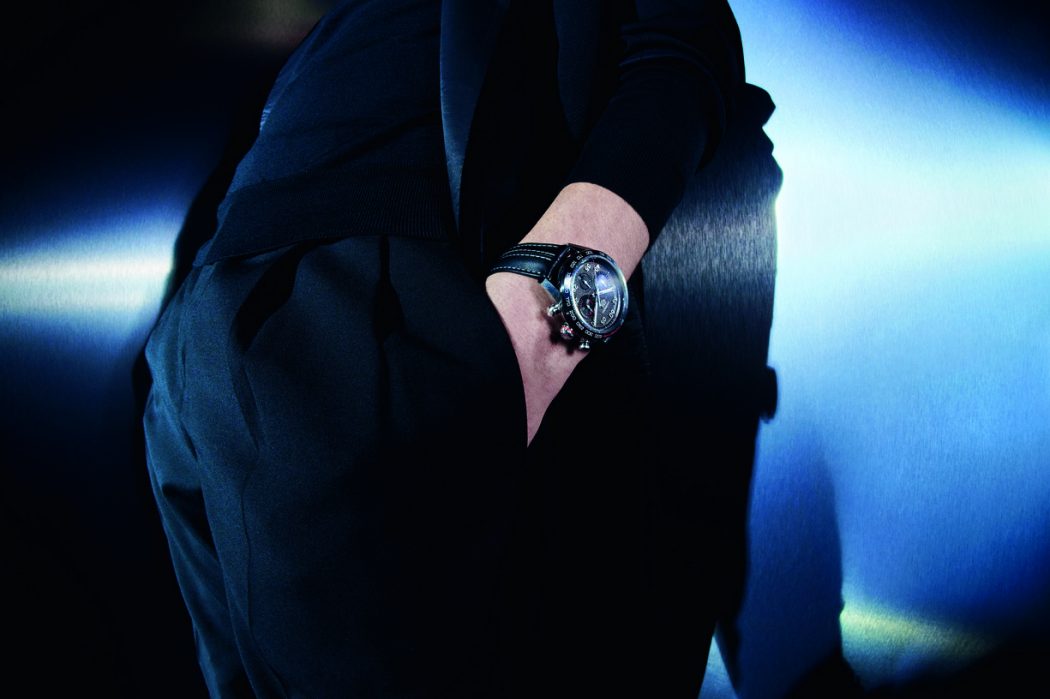 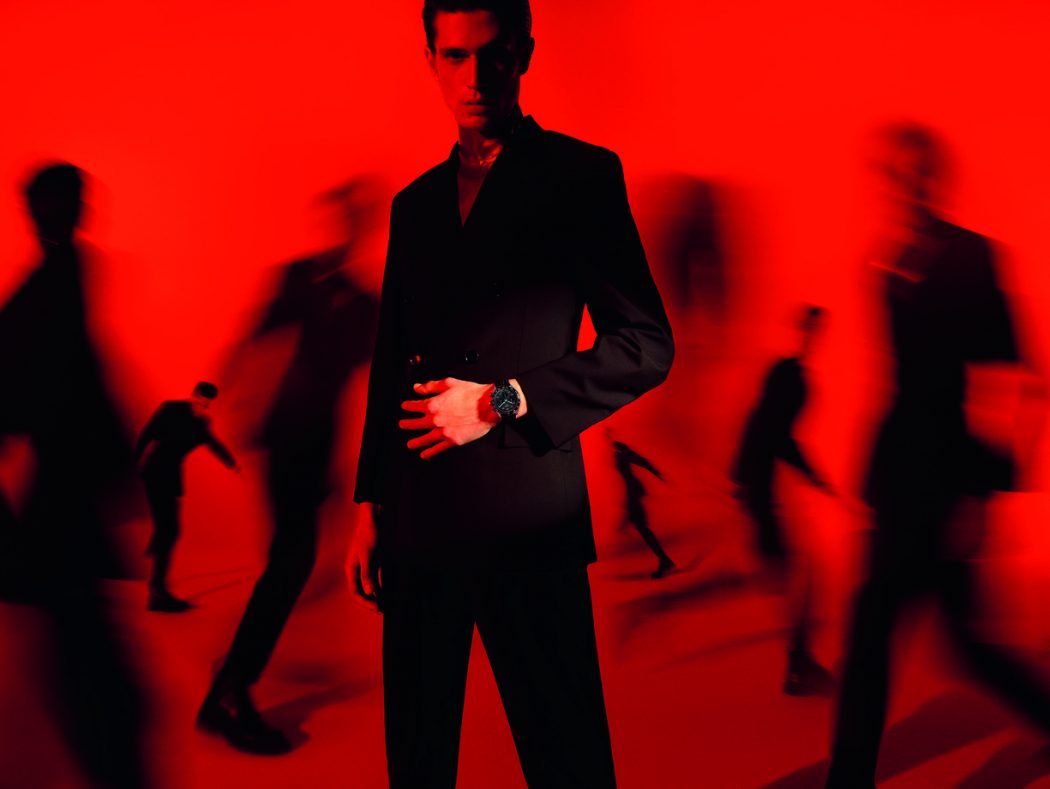 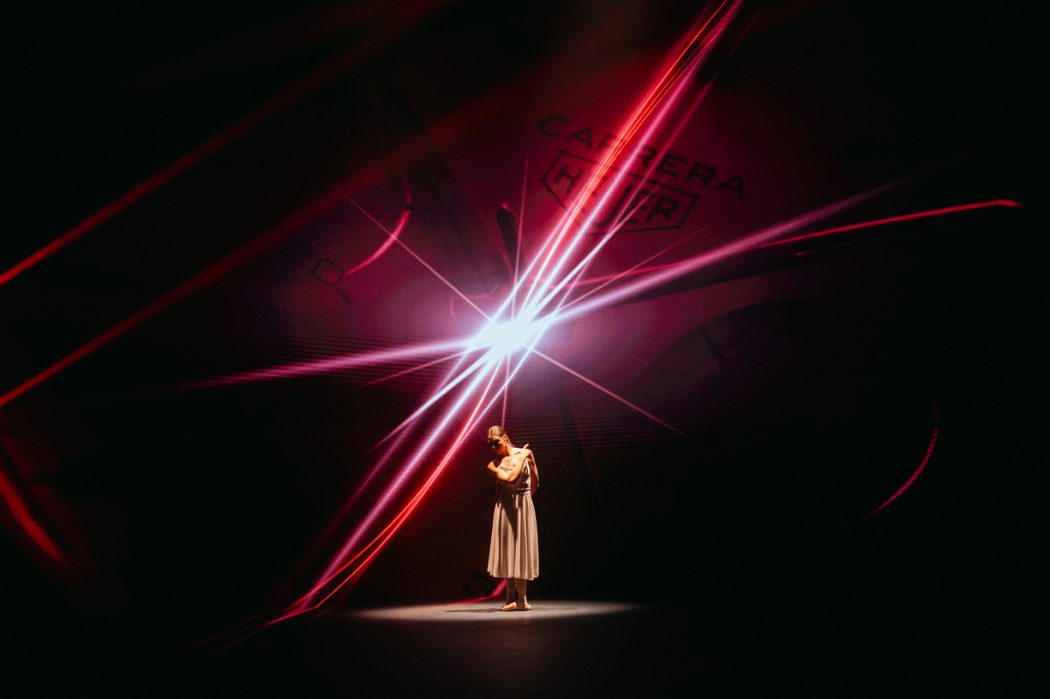 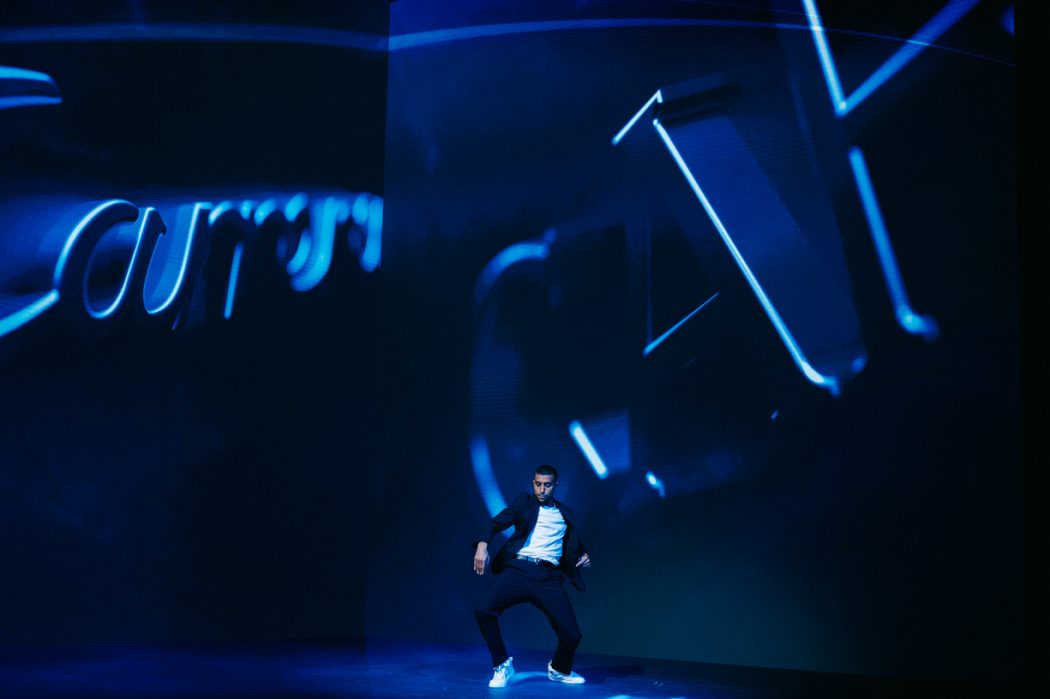 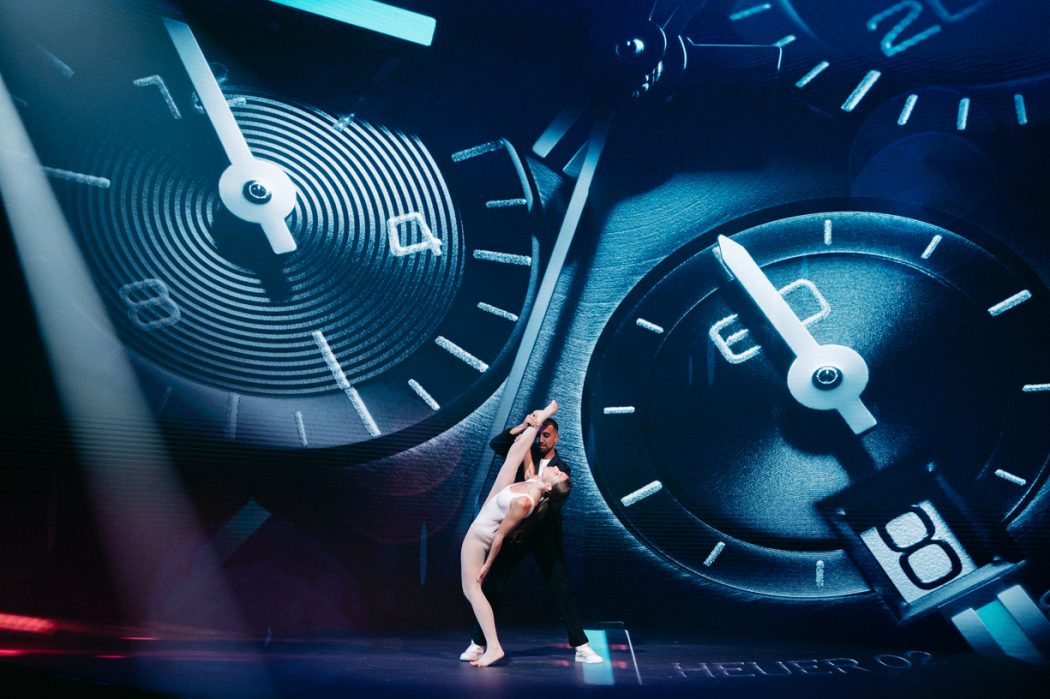 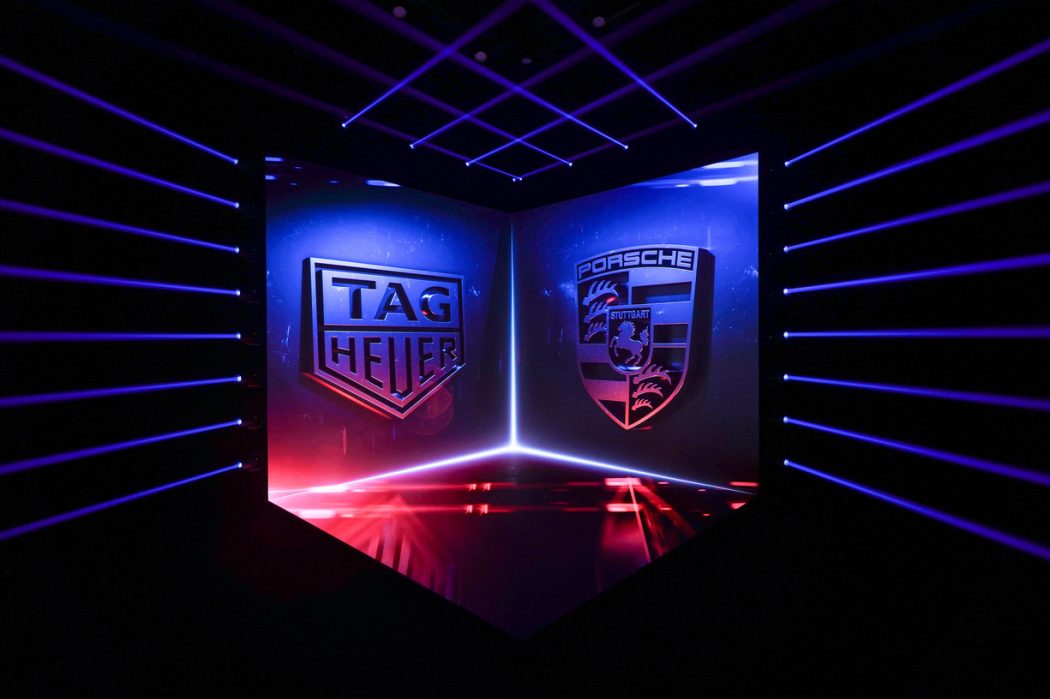 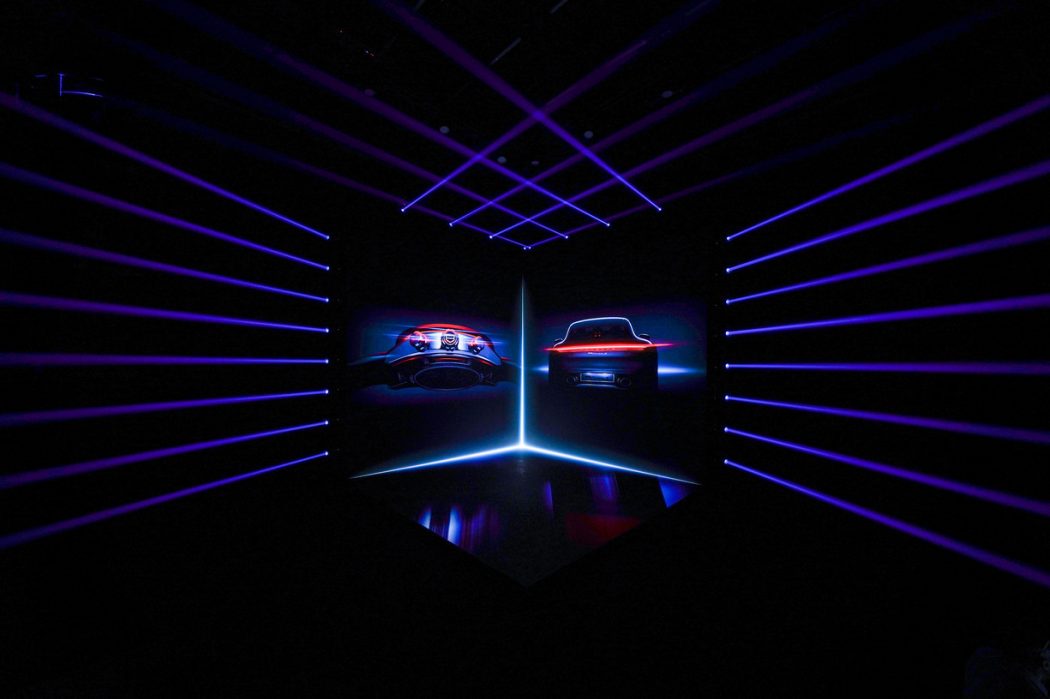 Fueled by a common history with innovation and motor racing at its core, led by visionary families whose values of entrepreneurship, precision and performance propelled them to the forefront of their respective industries, TAG Heuer and Porsche join forces to unveil an extensive partnership that will set a new standard for brand integration.

The Swiss luxury watchmaker TAG Heuer and the German sports car manufacturer Porsche have announced their new partnership: an authentic alliance between two brands whose common DNA in motorsports and racing forges a holistic and long-term collaboration ranging from competition to product development. A new watch, the TAG Heuer Carrera Porsche Chronograph, is unveiled as the first celebration of the iconic brands.

TAG Heuer CEO Frédéric Arnault says that the time is right for his brand’s partnership with Porsche: “TAG Heuer and Porsche have common history and values, of course, but more importantly, we share an attitude. Like Porsche, we are disruptors at heart, always in pursuit of high performance. With this alliance, TAG Heuer and Porsche finally come together officially after decades of close encounters and will create unmatched experiences and products for customers and fans that are passionate about both our brands and what we stand for.”

“The strong friendship of our brand with TAG Heuer exists for decades and I am more than happy that we are now taking the next steps in the frame of a strategic partnership,” says Detlev von Platen, Member of the Executive Board for Sales and Marketing at Porsche AG. “We bring together what our customers love the most about both of us: authentic heritage, thrilling sports events, unique life experiences and the fulfilment of dreams. We both strive to create some unique, magic moments for our communities. We now look forward to doing it together.”

Two histories – one passion TAG Heuer and Porsche have a number of things in common, from their rich histories and reputations for innovation to cutting-edge technologies, powerful and independent mindset, and a knack for excellence in design. And for over half a century, their stories have intersected in intricate, intriguing ways.

Of course, the argument can be made that certain similarities of heritage can be traced all the way back to when both companies were founded by self-taught entrepreneurs. Edouard Heuer and Ferdinand Porsche were visionaries and pioneers whose creations changed their chosen fields forever. Heuer was responsible for the first manufactured chronograph and Porsche invented an electric wheel hub motor. Both these accomplishments earned medals at World’s Fairs held in Paris 11 years apart. Heuer was honoured in 1889 and Porsche presented the first Lohner-Porsche Electromobile with this innovation at the Expo in Paris in 1900.

A Beautiful Friendship Begins . . . and Flourishes

The true cornerstones of the new partnership, however, are descendants of the brands’ founding fathers. Ferdinand Porsche’s son, Ferdinand Anton Ernst or “Ferry”, joined his father’s engineering office in 1931 at the age of 22 and founded the car brand that bears the family name in 1948. Within a few years, the Porsche name would be associated with race track success all around the world – including a class win in the Carrera Panamericana race of 1954. In honour of its successful participation, Porsche calls its most powerful engine ‘Carrera’.

Edouard Heuer’s great-grandson Jack led his family’s company for decades. In 1963, he created the first Heuer Carrera chronograph, designed to let drivers tell the time at a glance in the heat of action.

This ground-breaking timepiece and Porsche’s most powerful Carrera engine united Porsche and Heuer – for the first time – in the spirit of the ‘Carrera’ (or ‘race’), which embodied ambition, speed and technical excellence.

Jack Heuer was also responsible for the Heuer Monaco, the first square-faced, water-resistant automatic chronograph watch. Its name evoked the Monaco Grand Prix as well as the Principality’s renowned Monte Carlo Rally, which Porsche won in three consecutive years, from 1968 to 1970, with its signature 911 model. Just as the Porsche 911 had done for automobiles, the Heuer Monaco – with its distinctive case, its blue metallic dial, its red second’s hand and the crown positioned on the left side of the case – broke with the familiar design codes of traditional watchmaking.

The Heuer Monaco’s innovations had come at a significant financial cost and as an alternative to an expensive advertising campaign, Jack Heuer further cemented his brand’s link to Porsche with a creative sponsorship arrangement with Fribourg, Switzerland-based racing driver and Porsche dealer Jo Siffert. In 2005, at the premiere of the film Jo Siffert: Live Fast – Die Young, Jack Heuer remembered the terms of their contract: “In exchange for CHF 25,000, he would put our logo on his car and suit. In addition, he could buy our watches at wholesale prices and resell them to his racing friends at a substantial profit. Which he did with great success because half of the F1 paddock was wearing Heuer watches by the end of the 1969 season!”

It was this connection that led Steve McQueen to wear the Heuer logo on his racing suit during the filming of Le Mans in 1970, in which he drove a Porsche 917. The enigmatic American actor said at the time, “I drive the same car as Jo Siffert, and I want to wear the same suit as him.”

There was another important – and more formal – link between Porsche and Heuer, or more precisely, TAG Heuer, the name assumed by the Swiss watch brand when it was sold to the TAG Group in the mid-1980s. Together, the brands developed and produced the TAG-Turbo engine that enabled the McLaren team to win three consecutive F1 world titles: with Niki Lauda in 1984, followed by Alain Prost in 1985 and 1986.

In 1999, the relationship grew even stronger – from the Porsche Carrera Cup and Supercup competitions, followed by the Endurance World Championship and more was yet to come. TAG Heuer, as a founding partner of the Formula E championship, helped raise the profile of thrilling single-seater races in electric cars. Porsche created its own Formula E team with TAG Heuer as title and timing partner in 2019, marking a starting point for an even more powerful and far-reaching collaboration. And in 2021, that “beautiful friendship” has become a holistic official brand partnership, celebrated by a special-edition timepiece that proclaims proudly, “It was worth the wait!”.

New Sports Partnerships for 2021 and beyond

Along with the TAG Heuer Carrera Porsche Chronograph, which is introduced below in stunning detail, 2021 will feature a rich portfolio of joint projects that reflect TAG Heuer’s and Porsche’s shared commitment to speed and precision sports.

The foundations of the long, strong link between TAG Heuer and Porsche are world-class motorsports and it is fitting that in the years to come, these thrilling competitions will be at the very heart of the new partnership.

The TAG Heuer Porsche Formula E Team made history in its debut season. It set a milestone at the opener in Diriyah (SA) in November 2019, when André Lotterer crossed the finish line in second place: that was the first time a rookie team finished on a podium in its first race since the maiden season in 2014/2015. In its second year, the TAG Heuer Porsche Formula E Team will not only continue to attract new fans to a circuit that pits all-electric cars against each other but also fight for the World Championship. Behind the wheel of Porsche’s latest all-electric racecar, the 99X Electric will be drivers André Lotterer and his new teammate, Pascal Wehrlein.

Porsche has long distinguished itself in endurance events and together with TAG Heuer, its GT Team is well prepared for the coming FIA World Endurance Championship (WEC). The milestone year will also include series partnerships in ten editions of the worldwide one-make cup series Porsche Carrera Cup.

In addition to physical competitions, TAG Heuer also engages in virtual racing by supporting the Porsche TAG Heuer Esports Supercup. With such a rich common heritage on the track, TAG Heuer is naturally stepping in as a global partner in Porsche’s ‘classic’ events and rallies as well.

One team, on the green and on the court

Beyond the broad-based partnership in motorsports and esports, TAG Heuer and Porsche also share a passion for two other popular activities, golf and tennis. Golf has been a focal point of the TAG Heuer Connected watch developments in recent years, with the TAG Heuer Golf app offering a best-in-class experience to hundreds of thousands of players. Porsche for its part is running its own golf activities like the Porsche Golf Cup and is the sponsor of the Porsche European Open golf tournament since 2015, both of which TAG Heuer will join.

Porsche’s support of tennis includes its own tournament, the Porsche Tennis Grand Prix in Stuttgart, of which TAG Heuer will be the Official Timing, Watch and Chronograph partner moving forward and which features some of the most talented women in the game. This comes from TAG Heuer’s already prominent on-court presence and via partnerships with world-class tennis players. Joining forces in these sports as well was the obvious next step for both companies.

Carrera: an icon of a name that has been associated with TAG Heuer and Porsche for generations – so it was a natural choice for the first creative product collaboration. A tribute to the heritage of two legendary brands, both on and off the racetrack, the new chronograph offers a first glimpse at what they can achieve together.

The TAG Heuer Carrera Porsche Chronograph is an exquisite example of coordination, cooperation and collaboration. Based on TAG Heuer’s Carrera Sport Chronograph design, with its distinctive tachymeter scale engraved on the bezel, it introduces a number of features inspired by Porsche’s design essence. A compelling union of two icons of performance, quality, and innovation, this chronograph is a seamless blend of the Porsche and TAG Heuer universes, reflecting the excellence of both names without diluting the essence of either.

Porsche’s engraved inscription is visible on the bezel and the unmistakable font is also used for the indexes. The Porsche colours of red, black, and grey – which also recall historic Heuer models – are incorporated throughout the watch, and on clear display through the transparent cristal case back is the oscillating mass, which has been redesigned in affectionate tribute to Porsche’s celebrated steering wheel. It is printed with “Porsche” and “TAG Heuer”. The dial’s asphalt effect, created especially for this watch, perfectly expresses a passion for the road, while Arabic numerals suggest the numbers on the dashboard of fine Porsche sportscars.

This ground-breaking timepiece is presented either on a soft strap in luxurious calf leather and innovative stitching that echoes the Porsche interior or on an interlocking bracelet reflecting a streamlined racing design. At the heart of this stunning timepiece is the in-house Calibre Heuer 02 manufacture movement with an impressive 80-hour power reserve. The chronograph mechanism’s vertical clutch and column wheel demonstrate the brands’ unflinching demand for absolute precision.

Finally, the TAG Heuer Carrera Porsche Chronograph is a Special Edition watch and is delivered in bespoke packaging with colours and a style consistent with the remarkable watch inside. The black watch box features the logos of TAG Heuer and Porsche in white. Inside the box is a perfectly-sized black travel pouch with an unmistakably Porsche red interior.

The official partnership between TAG Heuer and Porsche may be on its starting line but it has been built on a remarkable foundation: the shared heritage and the common interests of two of the world’s favourite and most dynamic luxury brands. It is a friendship reflecting the dreams and aspirations of visionary founding families. It is a true collaboration developed over decades on some of the world’s most challenging racetracks and on the wrists of drivers who were the very embodiment of Jack Heuer’s motto, “Time doesn’t stop. Why should we?” 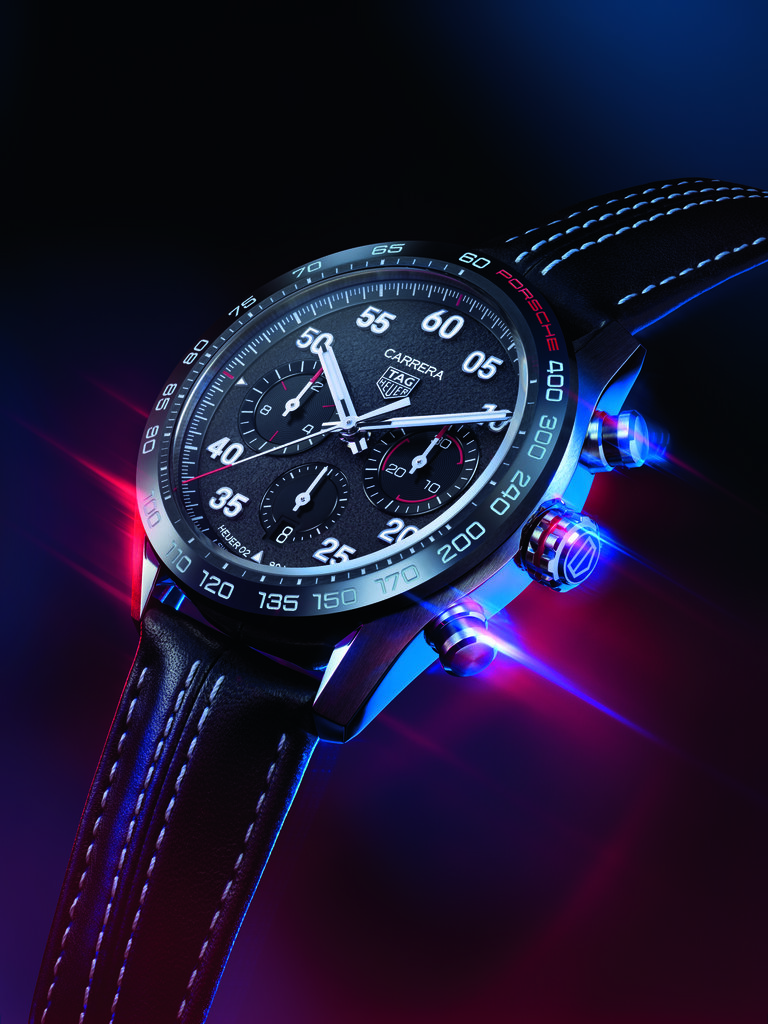