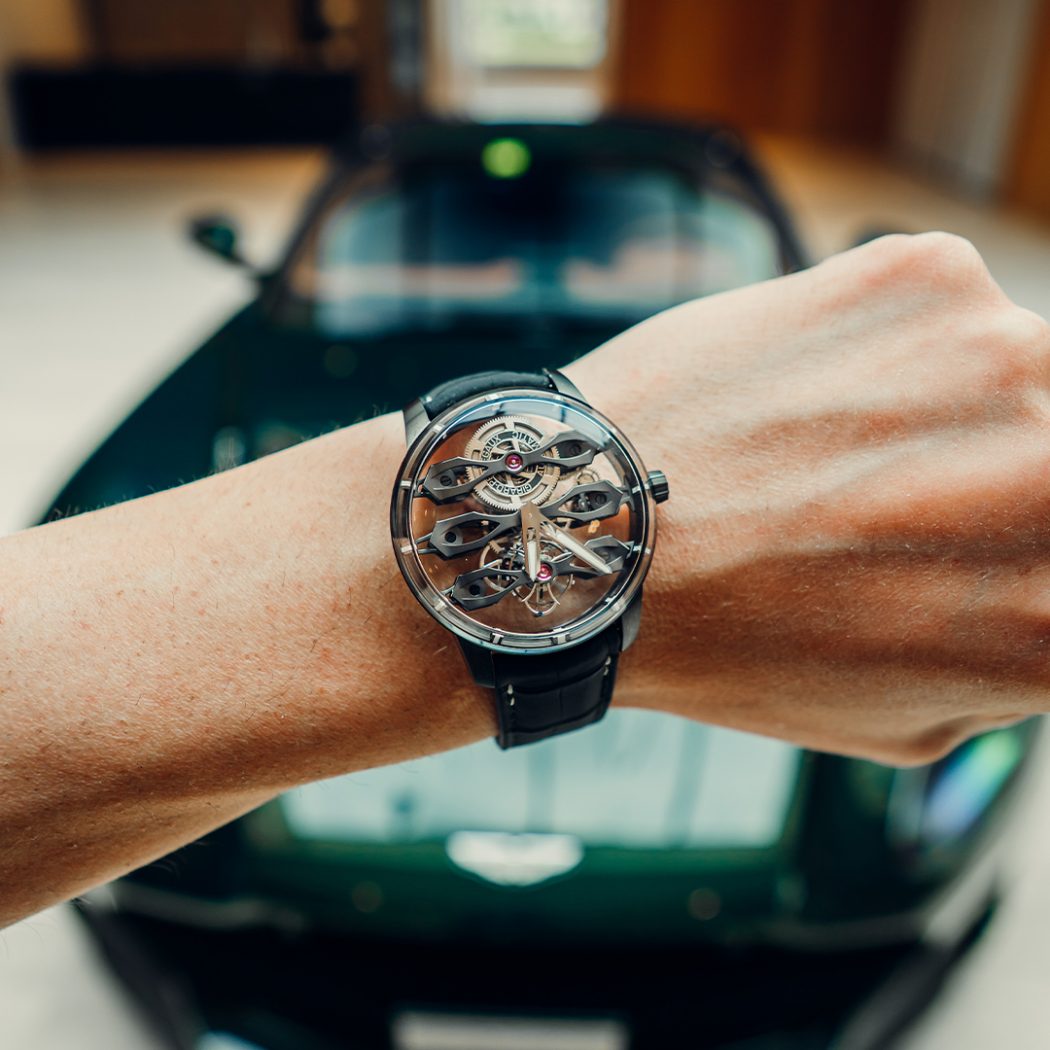 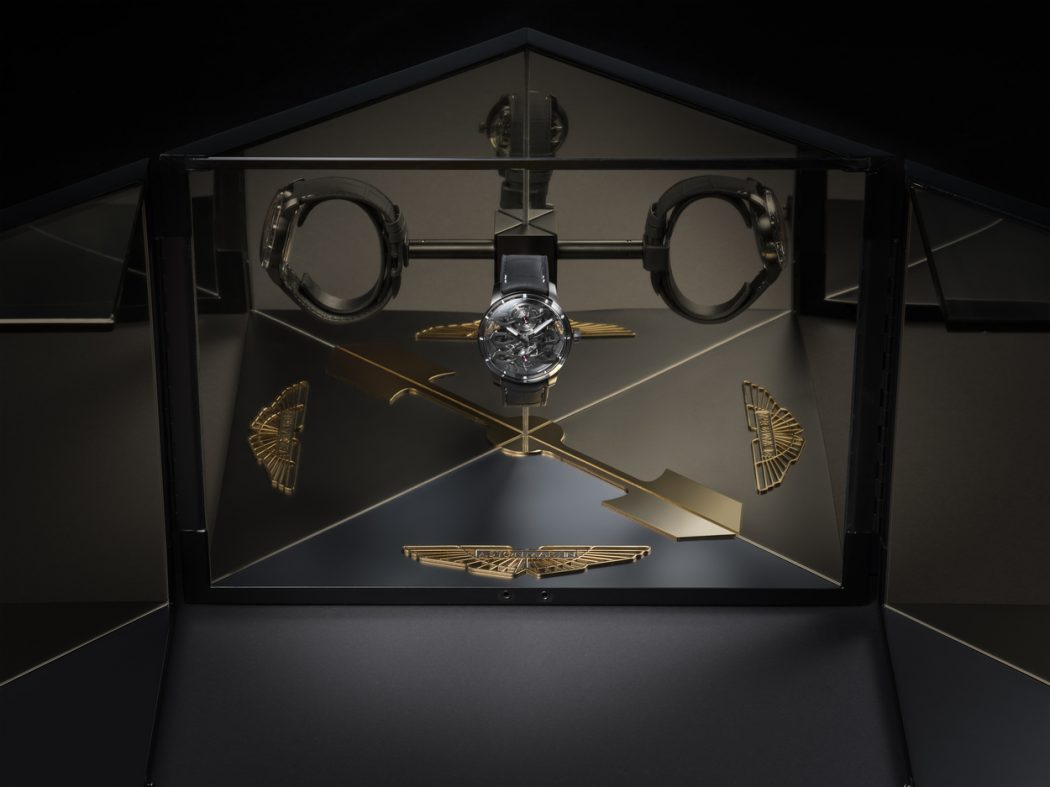 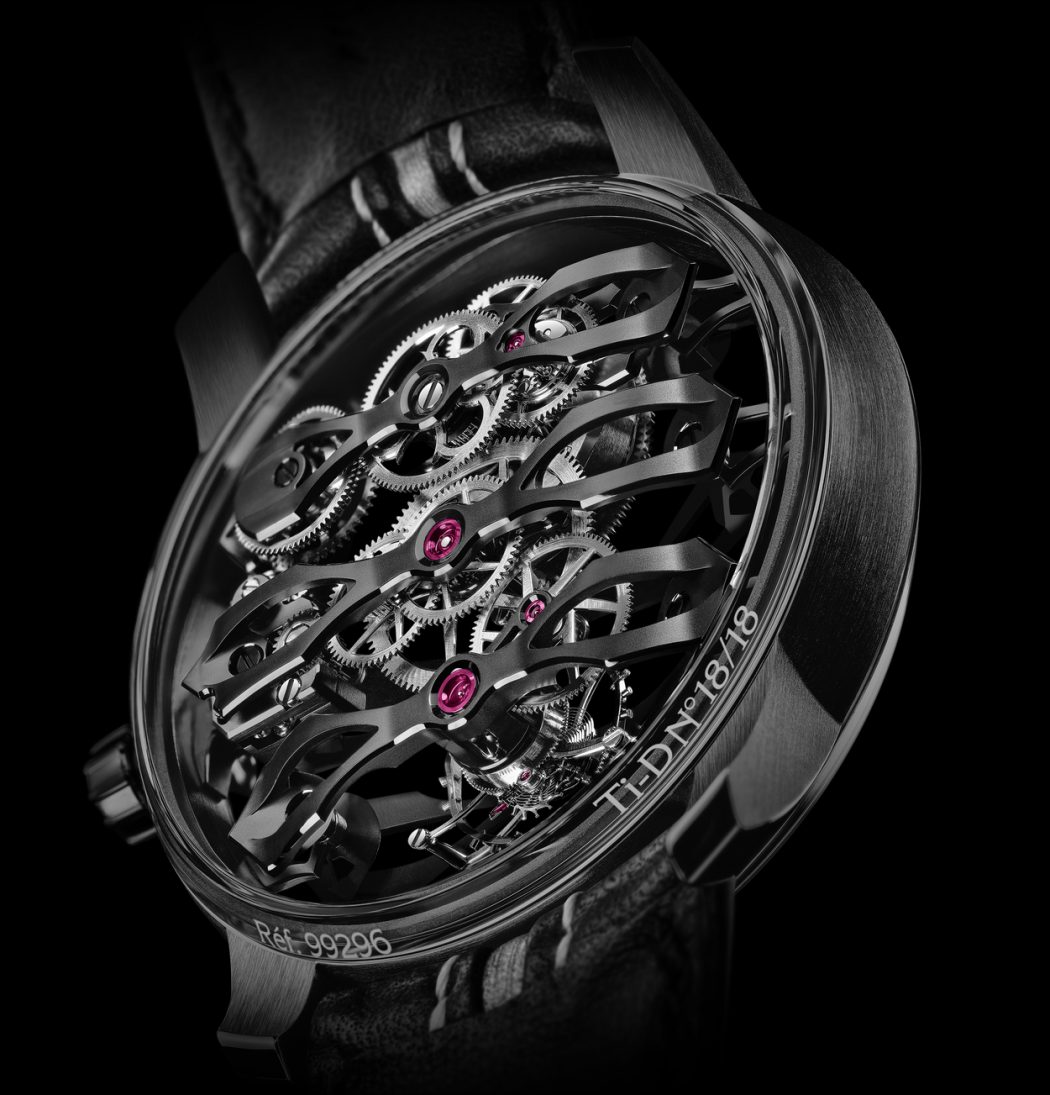 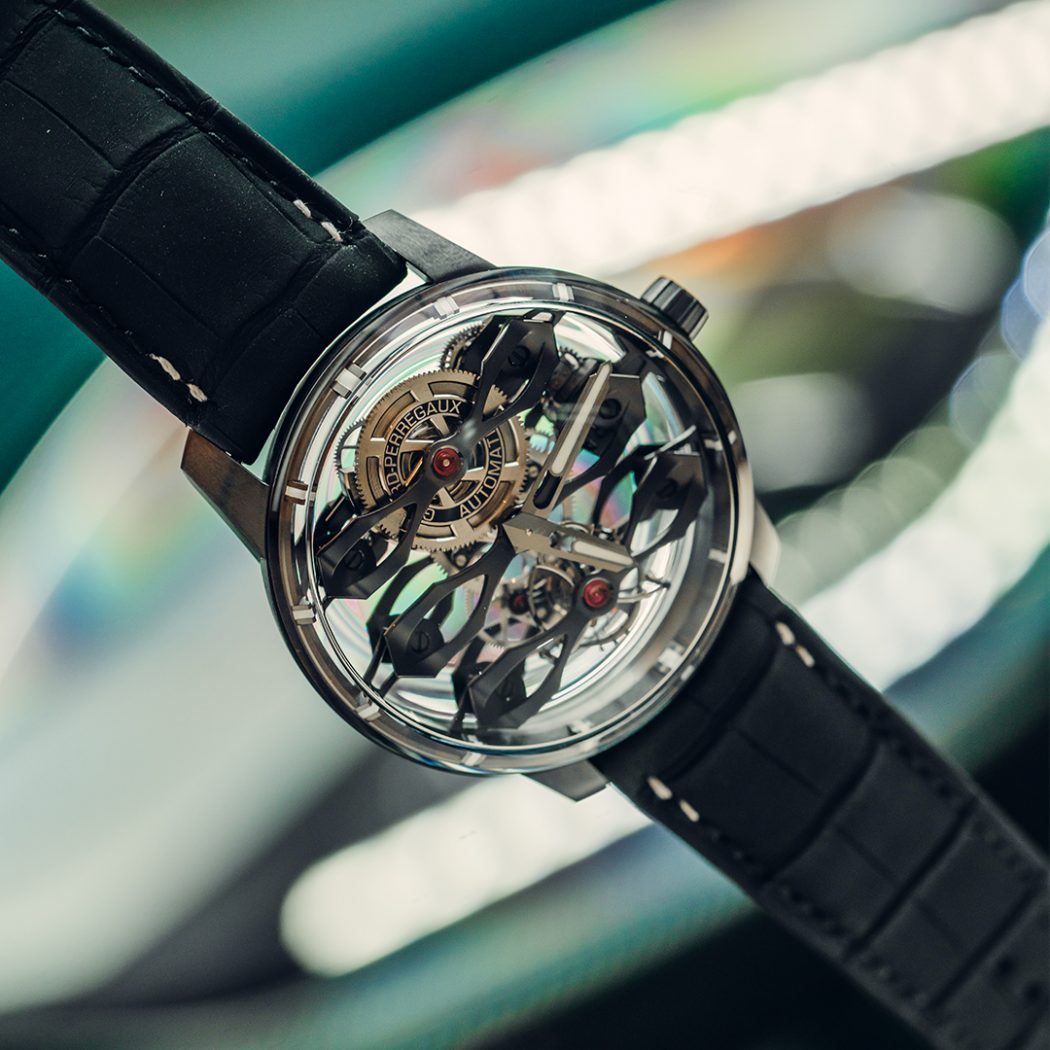 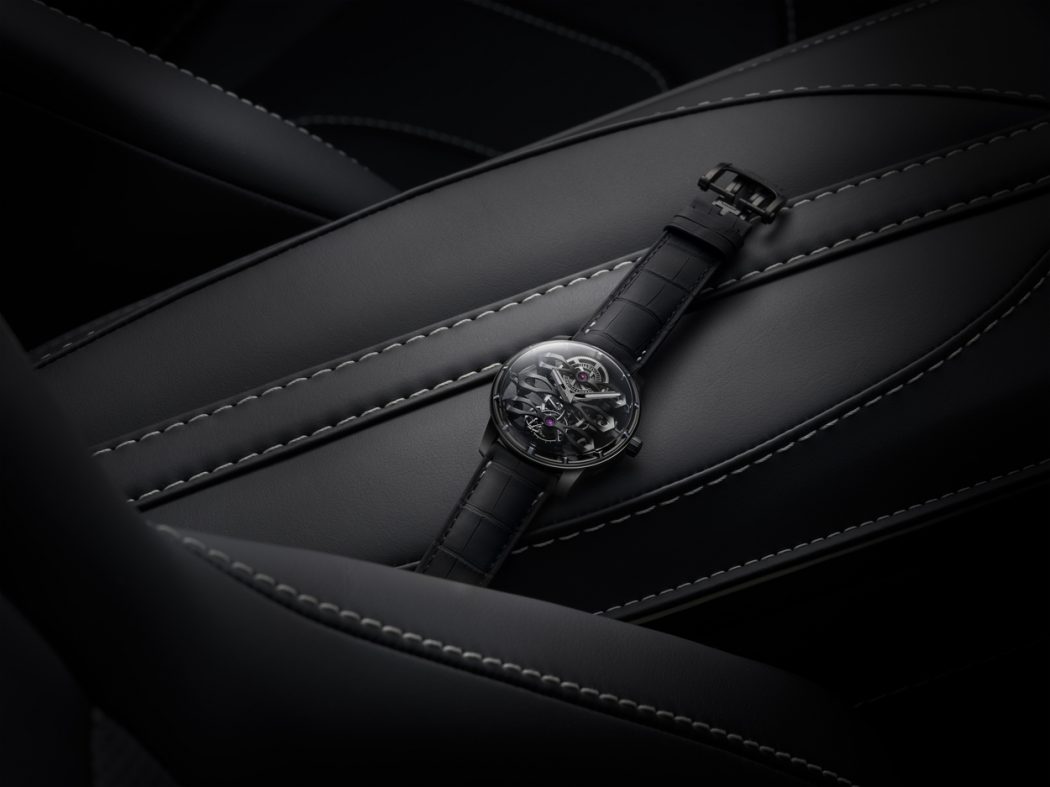 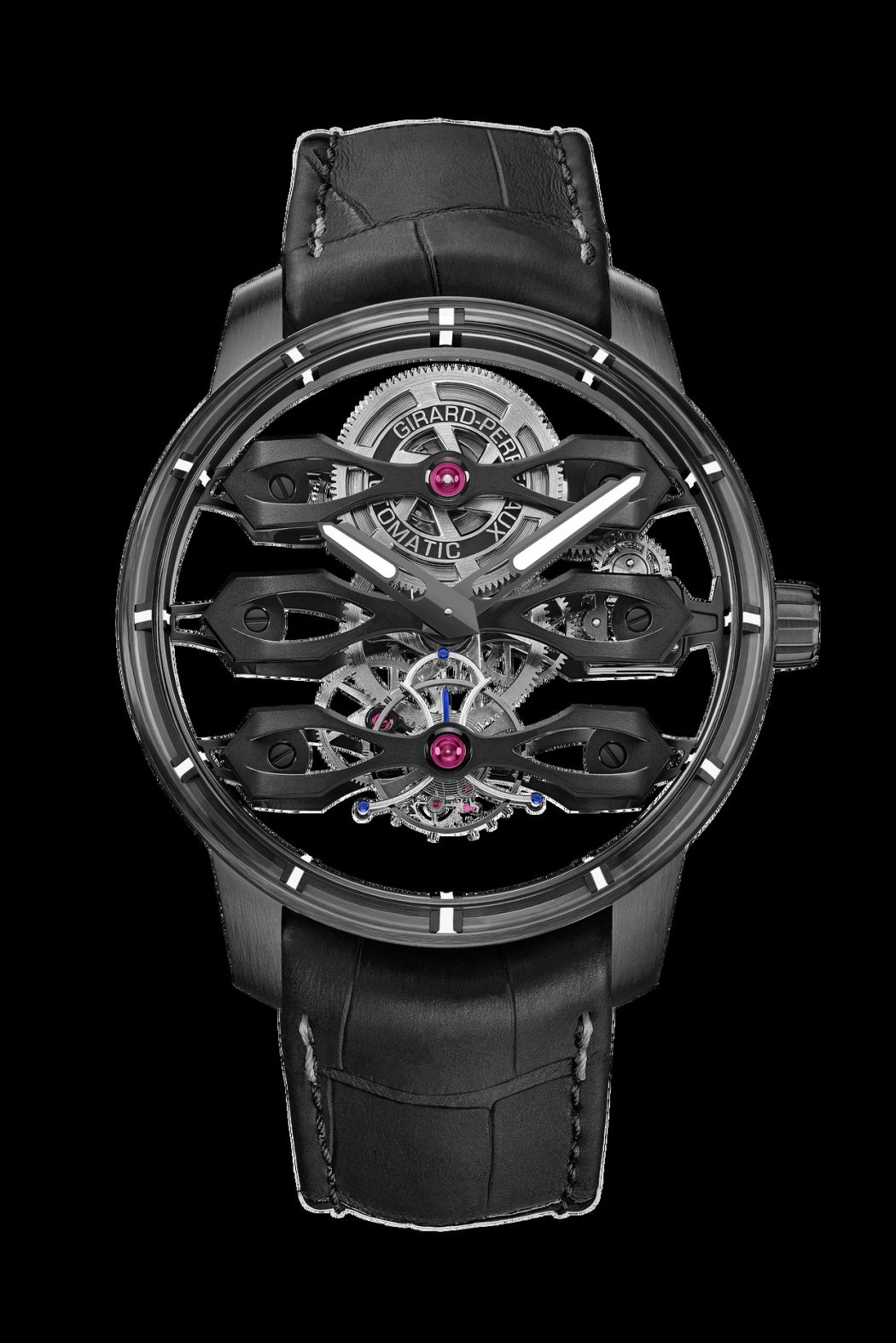 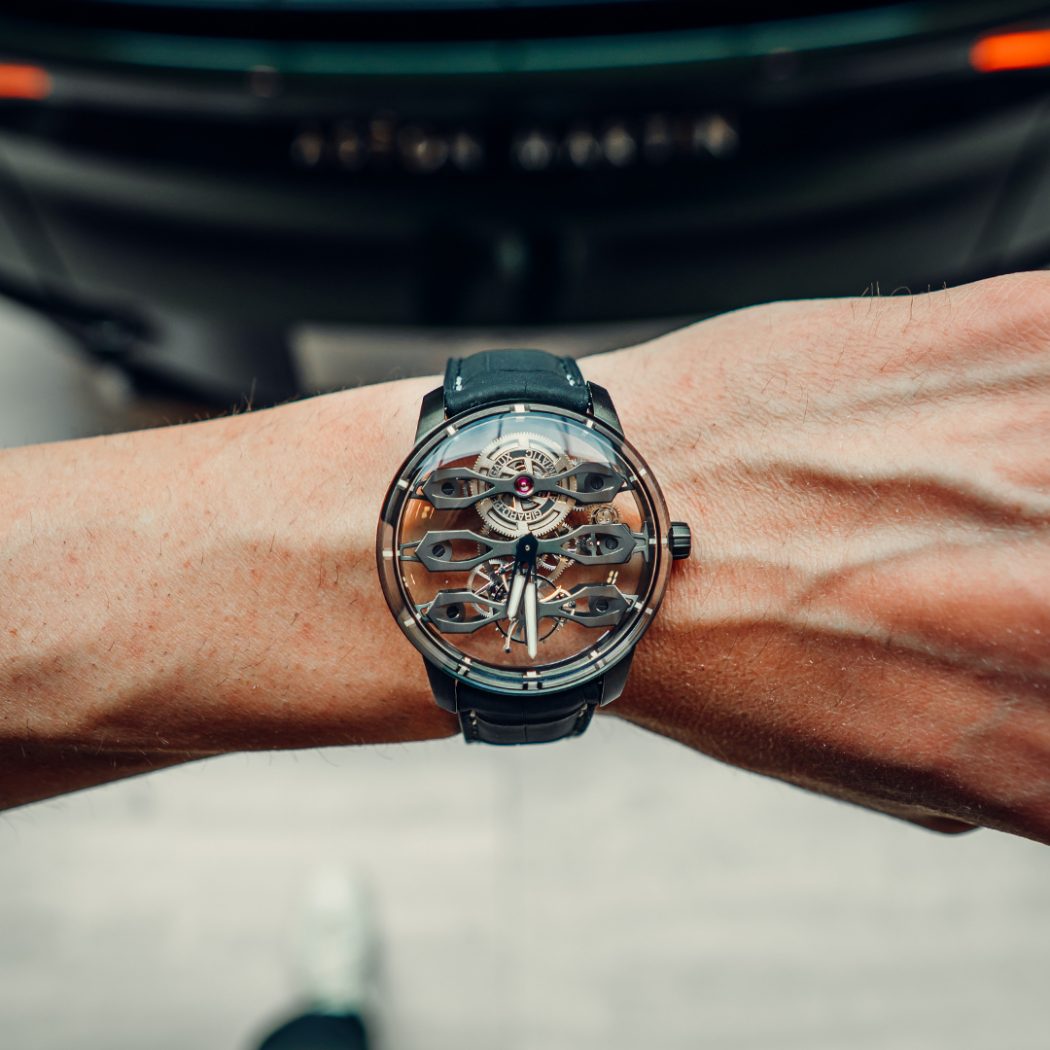 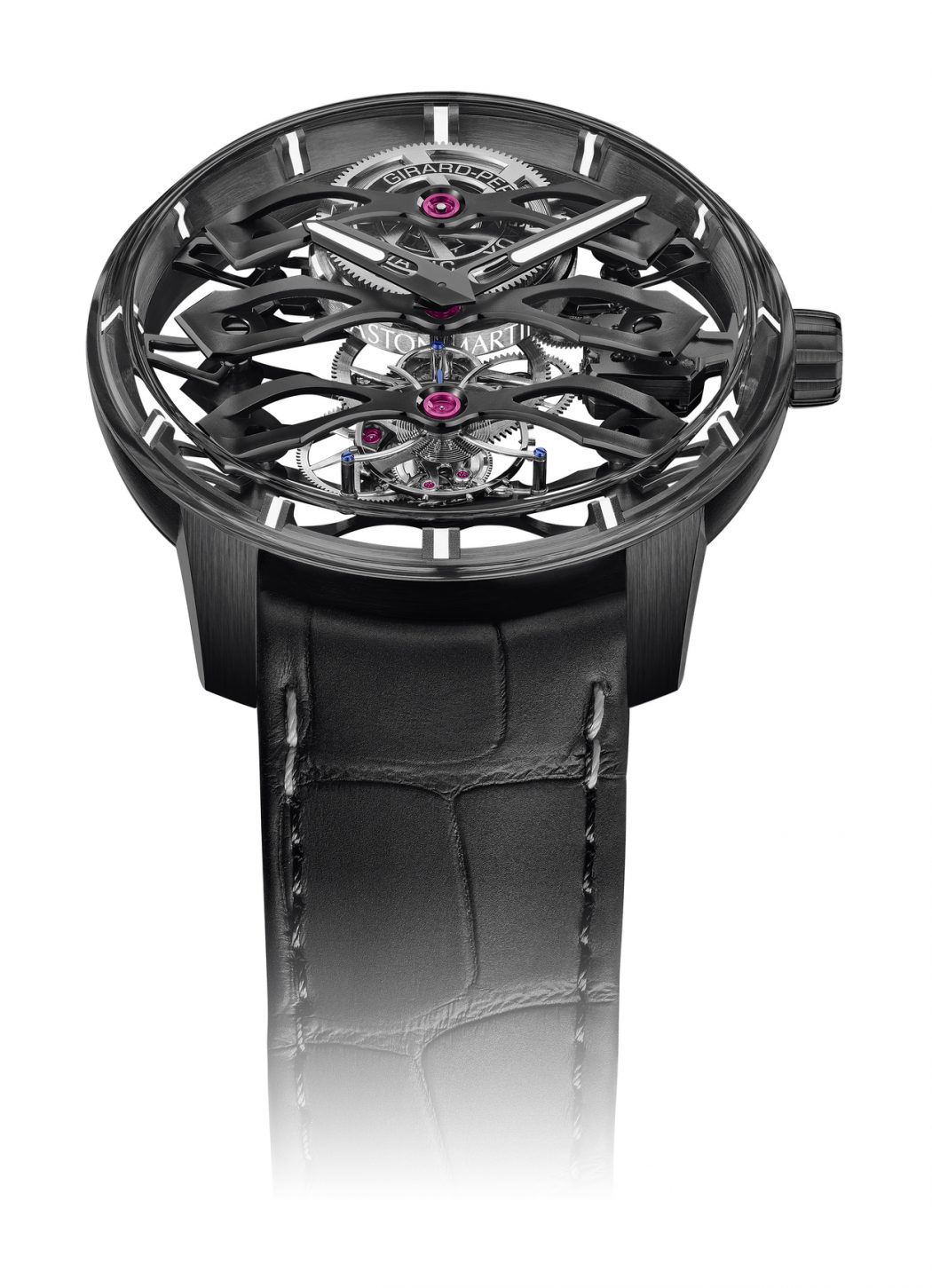 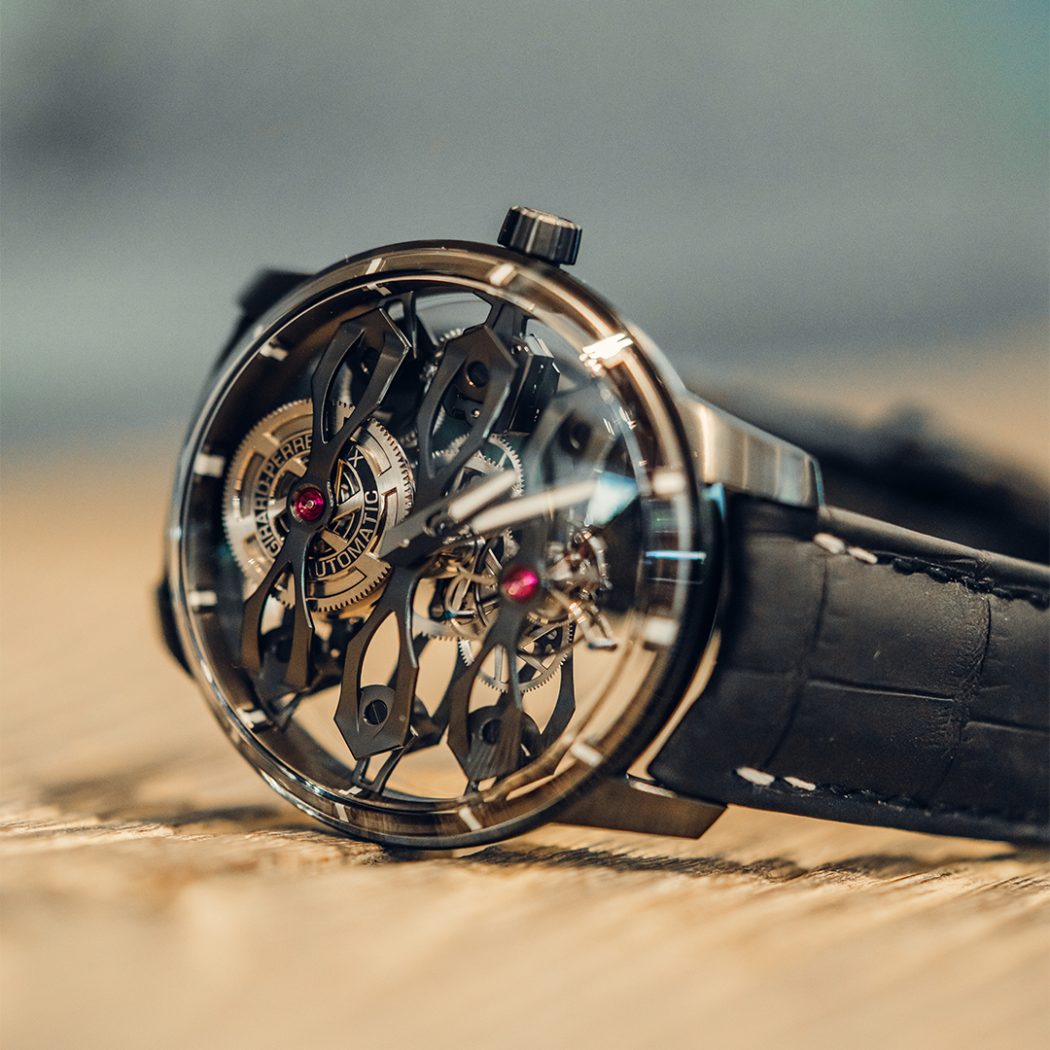 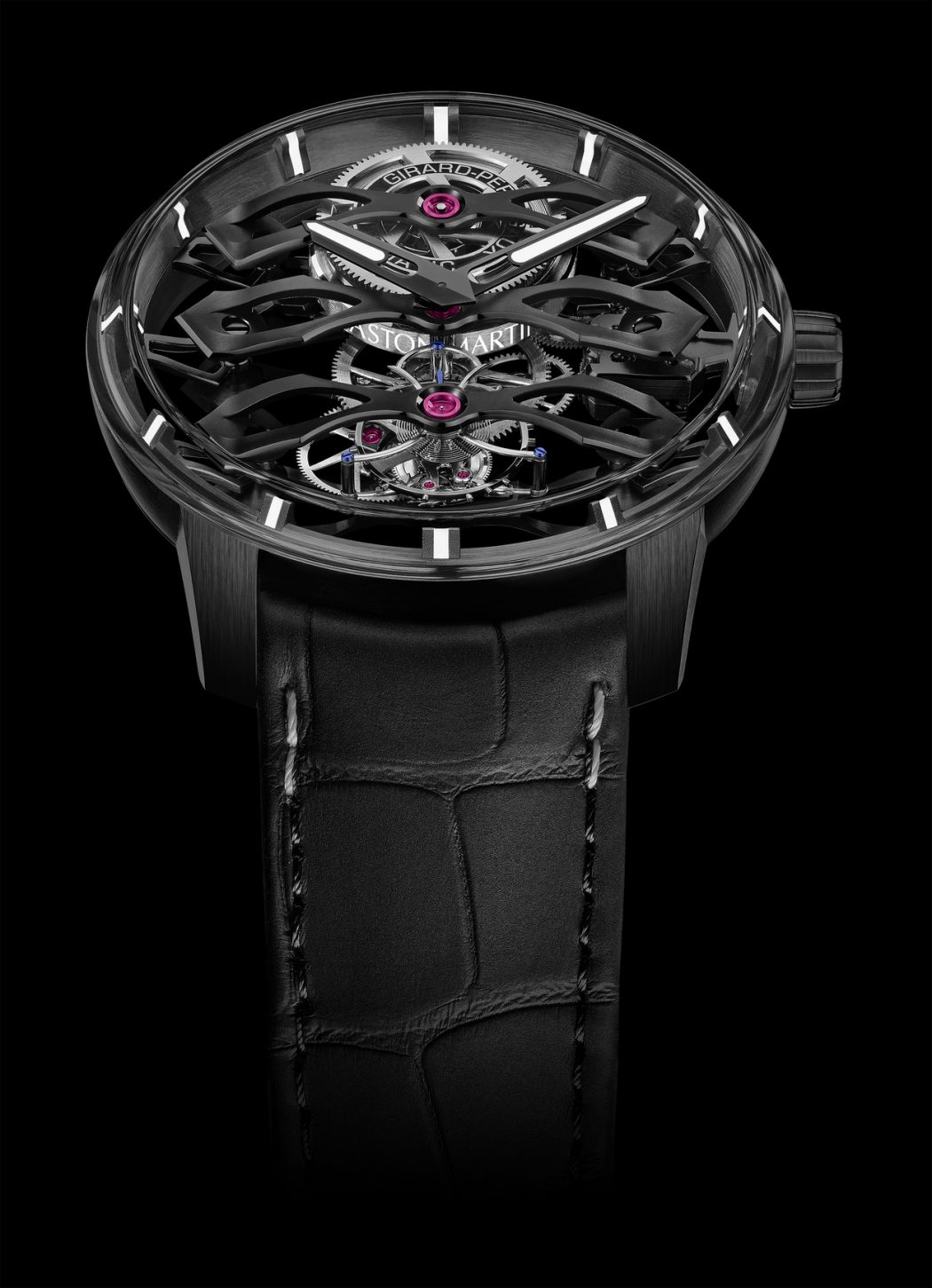 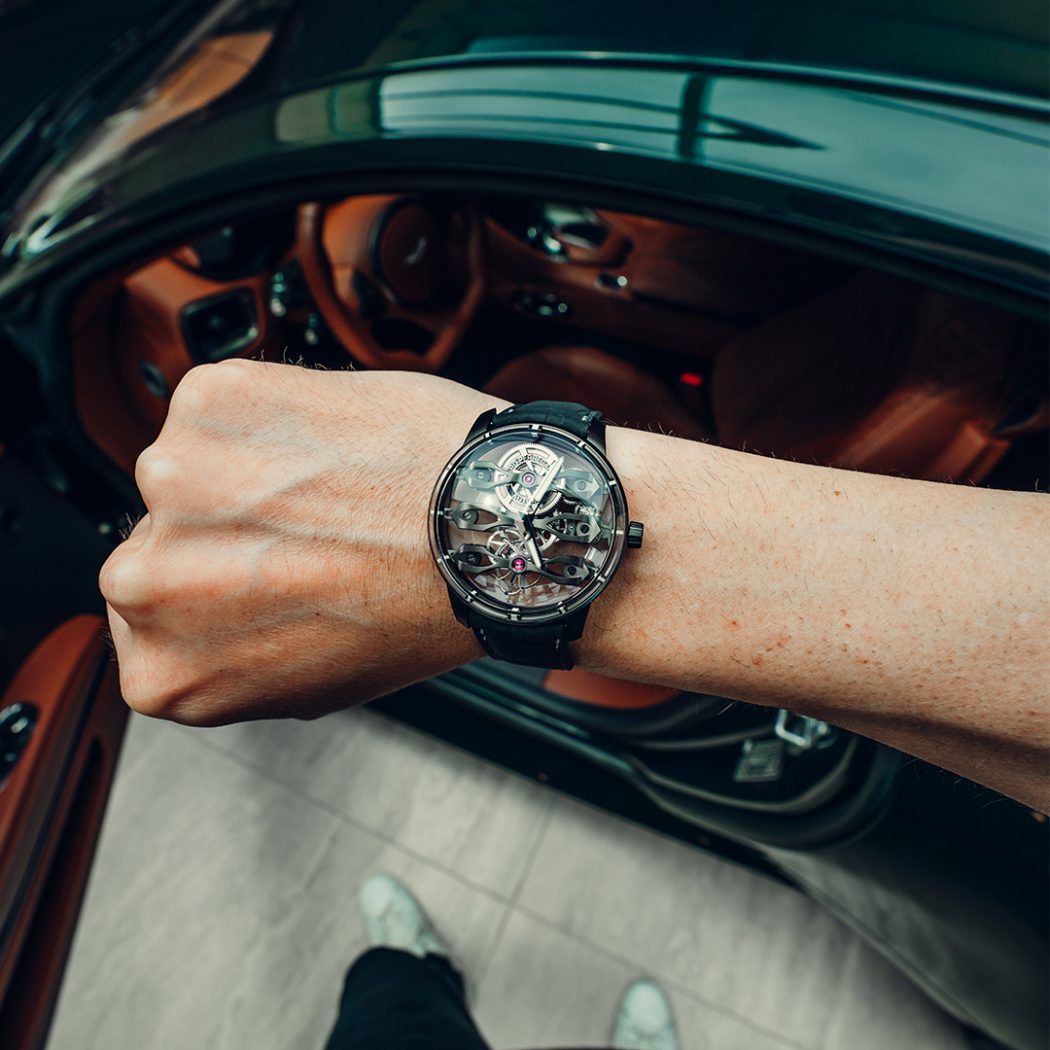 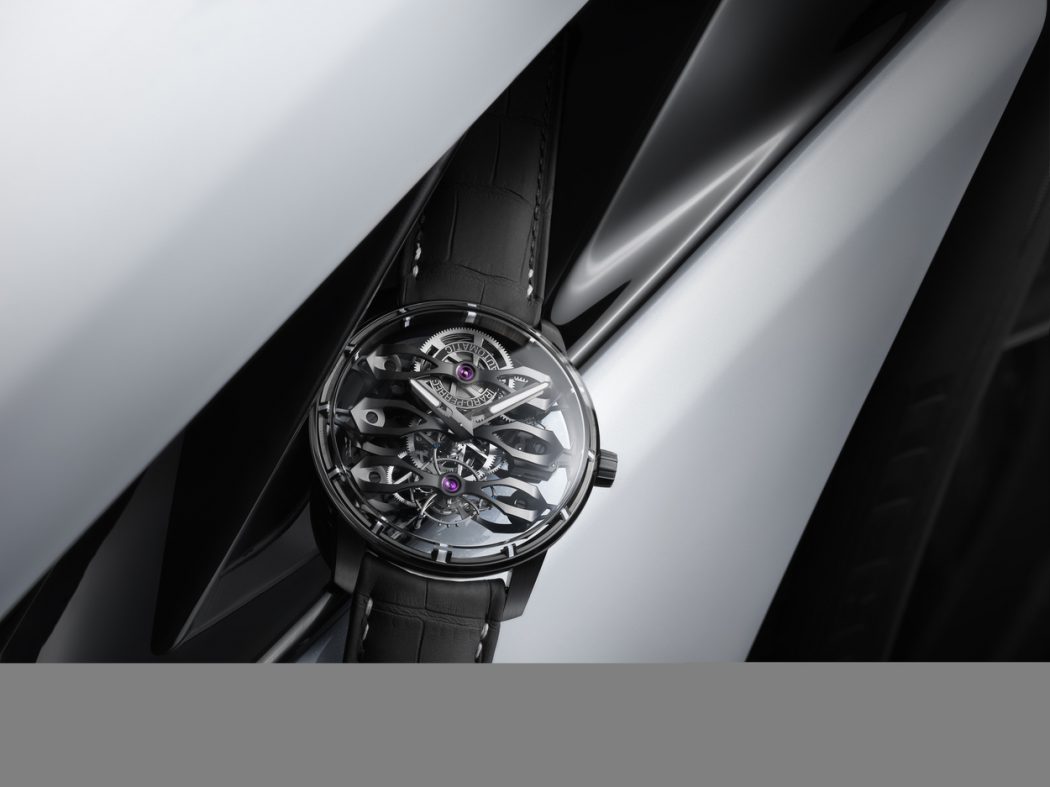 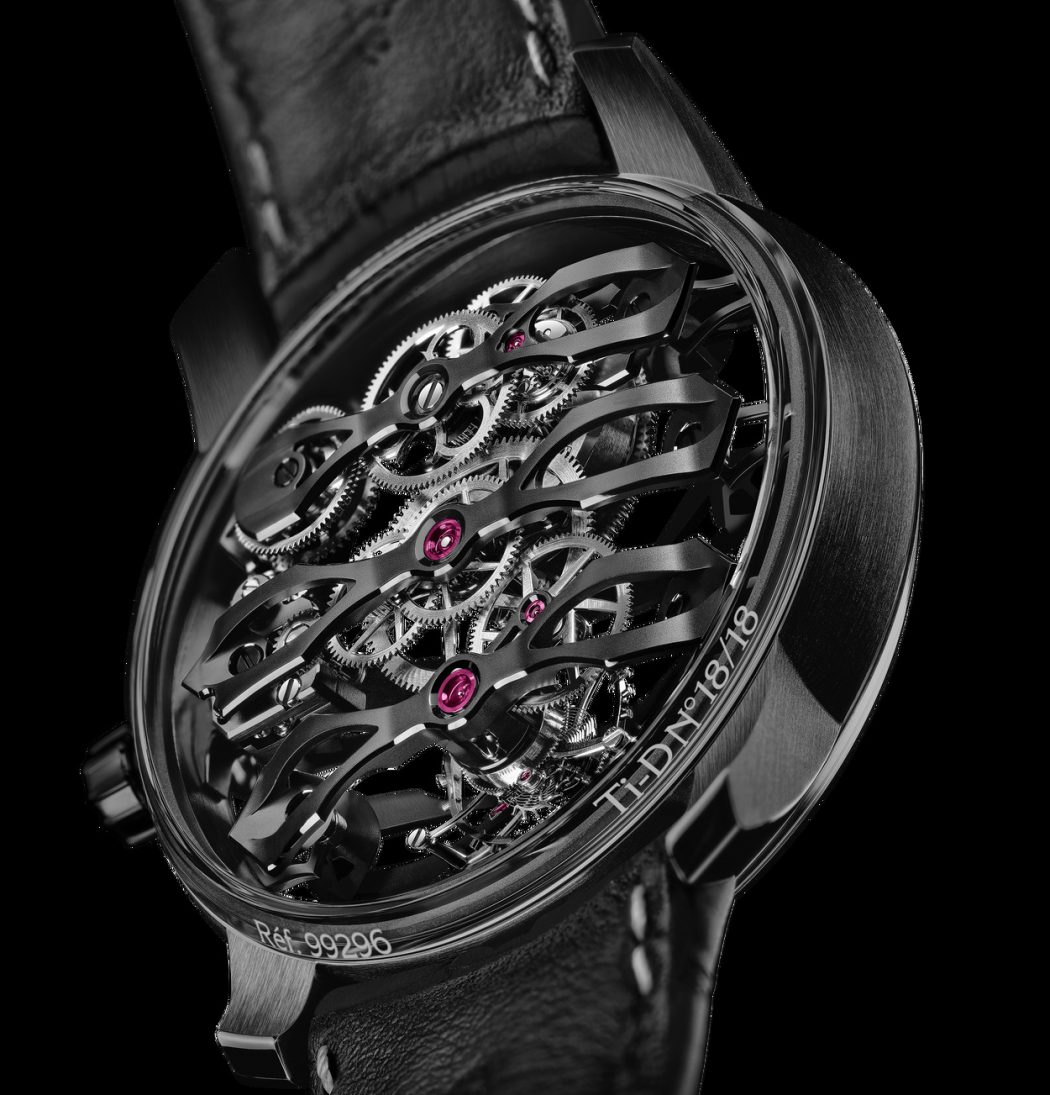 New Tourbillon with Three Flying Bridges – Aston Martin Edition celebrates the shared passions of the two luxury brands. This is the first timepiece to be offered after Girard-Perregaux was announced as the Official Watch Partner of Aston Martin in February.

Both brands demonstrate a passion for refined craftsmanship and have been working together, sharing their understanding of design, materials and technology. This latest model celebrates the iconic Three Bridges pocket watch from the 19th century in a decidedly contemporary way, down to the smallest details, including the strap. The latter is a world premiere, presented in black calf leather and featuring Rubber Alloy, an innovative rubber insert injected with white gold. The design of the strap is intended to evoke thoughts of Aston Martin racing cars of the past.

Upholding Girard-Perregaux tradition, this model skilfully plays with proportions and shapes much to the delight of aesthetes.

The 44-millimetre case of the Tourbillon with Three Flying Bridges – Aston Martin Edition is formed of Grade 5 titanium, a strong, hypoallergenic alloy selected by Aston Martin for its lightweight properties. It is suffused with black DLC (Diamond-Like Carbon), bestowing the watch with a stealthy appearance. Interestingly, titanium ore was discovered in Great Britain, the home of Aston Martin, back in 1791 by an English clergyman, William Gregor, in the same year Girard-Perregaux was founded.

A sapphire crystal ‘box’ is positioned in front of the house, as well as to the rear, coaxing light to illuminate the case interior, thereby augmenting readability. The movement eschews the main plate, sitting between both panes of sapphire crystal and seemingly floating in mid-air. Three bridges, an iconic signature of Girard-Perregaux, span the dial and are formed of titanium with black PVD (Physical Vapour Deposition) treatment and polished angles.

The design endows the timepiece with an airy appearance, affording breathtaking views of movement components ordinarily hidden from view. While Girard-Perregaux has a long history of making the invisible visible, in this instance it has ventured off-piste, creating a watch whose movement appears to levitate within the case. This is achieved by paring back the movement, causing the main plate to seemingly disappear, thereby creating the illusion of the movement flying within the case. It was this particular characteristic that led to the term ‘Flying Bridges’.

The cage of the tourbillon, positioned in the lower portion of the dial, is ‘lyre-shaped’, a characteristic found on all the company’s tourbillons dating back to the 19th century. A blued hand affixed to the cage imparts the running seconds. The tourbillon cage, measuring a mere 10mm in diameter, is composed of 79 components which collectively weigh only 0.25 grams. This remarkably low figure helps mitigate energy consumption.

The barrel, positioned at 12 o’clock, is open-worked, affording partial views of the mainspring. A white gold micro-rotor, positioned beneath the barrel, energises the mainspring and, unlike most automatic watches, it grants unobstructed views of the movement. The car company’s name is engraved on the vertical flank of the micro-rotor and is filled with white luminescent treatment which appears blue in restricted light. Likewise, the indexes and hands are also treated with white luminescent treatment and, once again, emit a blue glow in dim light.

“We are delighted to partner with Aston Martin, entrusting their team with arguably our most iconic timepiece, delivering a fresh perspective on Haute Horlogerie. Rarely do we work with others to reinterpret the Three Bridges, however, on this occasion, we have made an exception, mindful of Aston Martin’s prowess for design.

“When viewing the design of an Aston Martin, you will note the firm’s distinctive front grille, first seen on the DB Mark III of the late 50s. Likewise, the scoops and side strakes found on the company’s modern-day models are functional elements, intended to improve airflow while enriching the overall appearance of each car.”

“At Girard-Perregaux, we share a similar philosophy. For example, when the Maison released the now-legendary Tourbillon with Three Gold Bridges in 1867, it transformed three functional elements into attractive aesthetic features and demonstrated an approach that we continue to employ today. Finally, this latest partnership provides a fascinating chapter in Girard-Perregaux’s 230-year history.”

‘The greatest of the challenges we faced with the design of this new timepiece were those of scale, as you can imagine. We had to consider lines and proportion on a far smaller scale than we are used to in the realm of automotive design. That said, good design is good design, whether it is a watch or a car, the principles remain the same. I’m delighted with the finished watch and congratulate everyone who worked on this project as this collaboration has produced a timepiece of great beauty.

The Tourbillon with Three Flying Bridges – Aston Martin Edition, a limited edition of 18 pieces, is immediately available worldwide in all authorised Girard-Perregaux retailers. 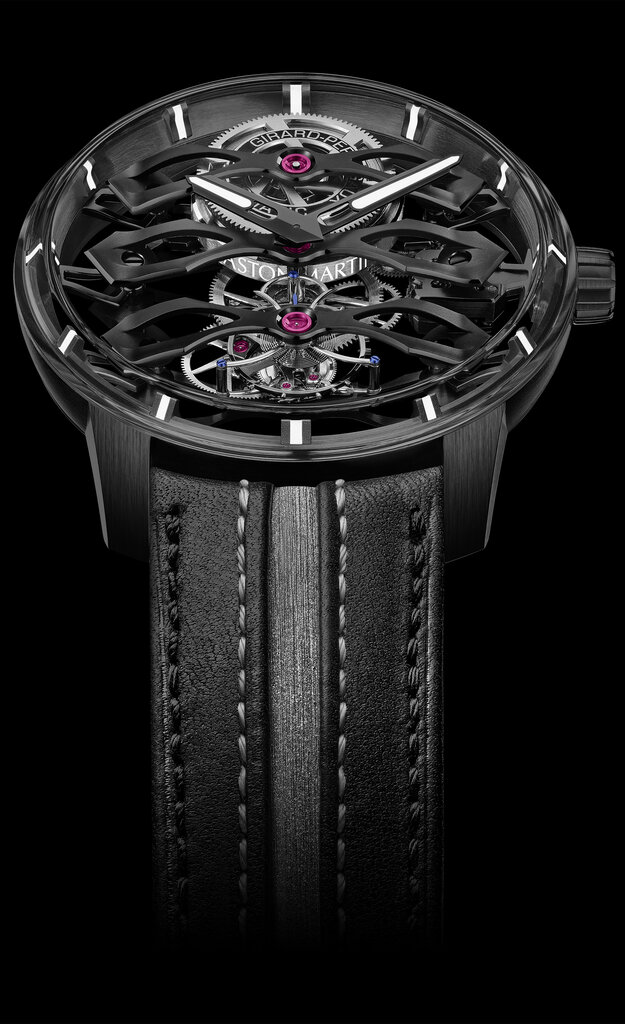