If ever there was a deal that Bernie Ecclestone let slip away it was getting money from Monaco’s F1 contract. The ACM is one of only a handful of circuit operators which takes all the revenue from trackside advertising and this alone totalled $16.25m in 2008.

Monaco is also the only circuit that hosts F1 without paying fees and since these average at $28m annually it is a huge saving. With its revenues at a maximum and expenses at a minimum, the Monaco Grand Prix has the ideal financial foundation. Being one of the most historic and popular tracks on the calendar is the icing on the cake. However, if ACM president Michel Boeri had got his way, Monaco would have even more money in its coffers from F1.

In 1983, as modern-day F1 was being born, the ACM became locked in a titanic tussle with the Fédération Internationale du Sport Automobile (FISA), the sporting division of the FIA. The origin of the dispute was the creation of the Concorde Agreement, the contract which commits the teams to race and was signed by their organisation FOCA as well as the FIA and Ecclestone’s company F.O.C.A. Administration. The FIA’s ultimate control over the television rights to F1 races is recognised in the Concorde and the original contract gave F.O.C.A. Administration the power to market them. Ecclestone built a billion-dollar business on this but it had previously been handled directly by the circuits. 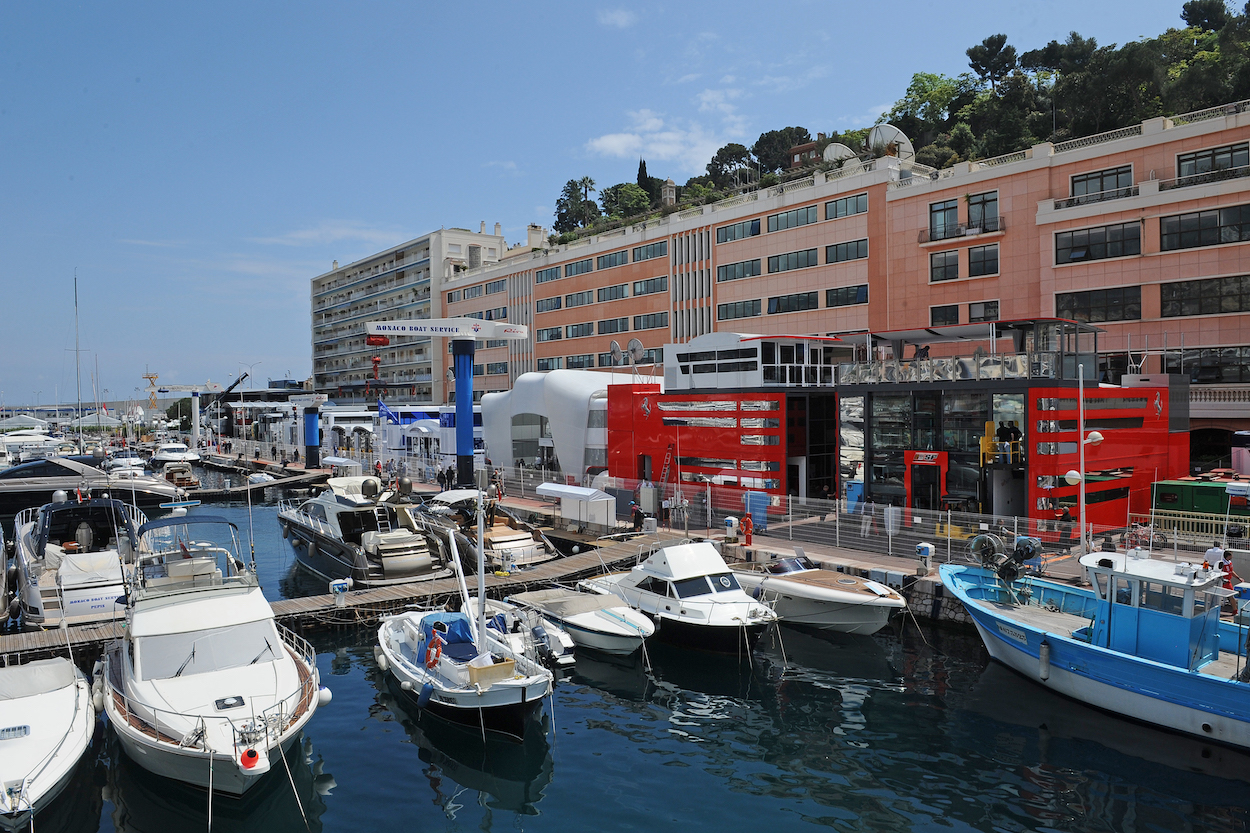 These TV deals were then only worth hundreds of thousands of dollars, rather than the tens of millions they currently sell for, but some circuits resolutely clung on to them. Monaco was one. Its deal with American channel ABC began around 1963 and when it expired 20 years later Boeri flouted the FIA’s mandate and signed a new five-year contract with the station.

FISA President, Jean-Marie Balestre, threatened the ACM with expulsion from the FIA and removed Monaco from the provisional F1 calendar for 1984. The stand-off culminated in a series of lawsuits issued by the ACM against the FISA to test the legality of the FIA’s ownership of the TV rights as claimed in the Concorde. At the height of the crisis, senior aides to France’s president Mitterrand and Monaco’s then-ruling Prince Rainier became personally involved with the latter stating that only he could take the final decision for the principality of Monaco. It didn’t do the state any good.

In February 1985, five months before the race would usually take place, a High Court of Justice in Paris refused to order the FIA to reinstate the Monaco GP on the calendar. With no alternative but to lose its flagship, Boeri was forced to concede defeat and he agreed that TV rights would revert to the FIA, that all legal action against the FIA would be dropped and that the ACM would pay all the FISA’s legal costs. 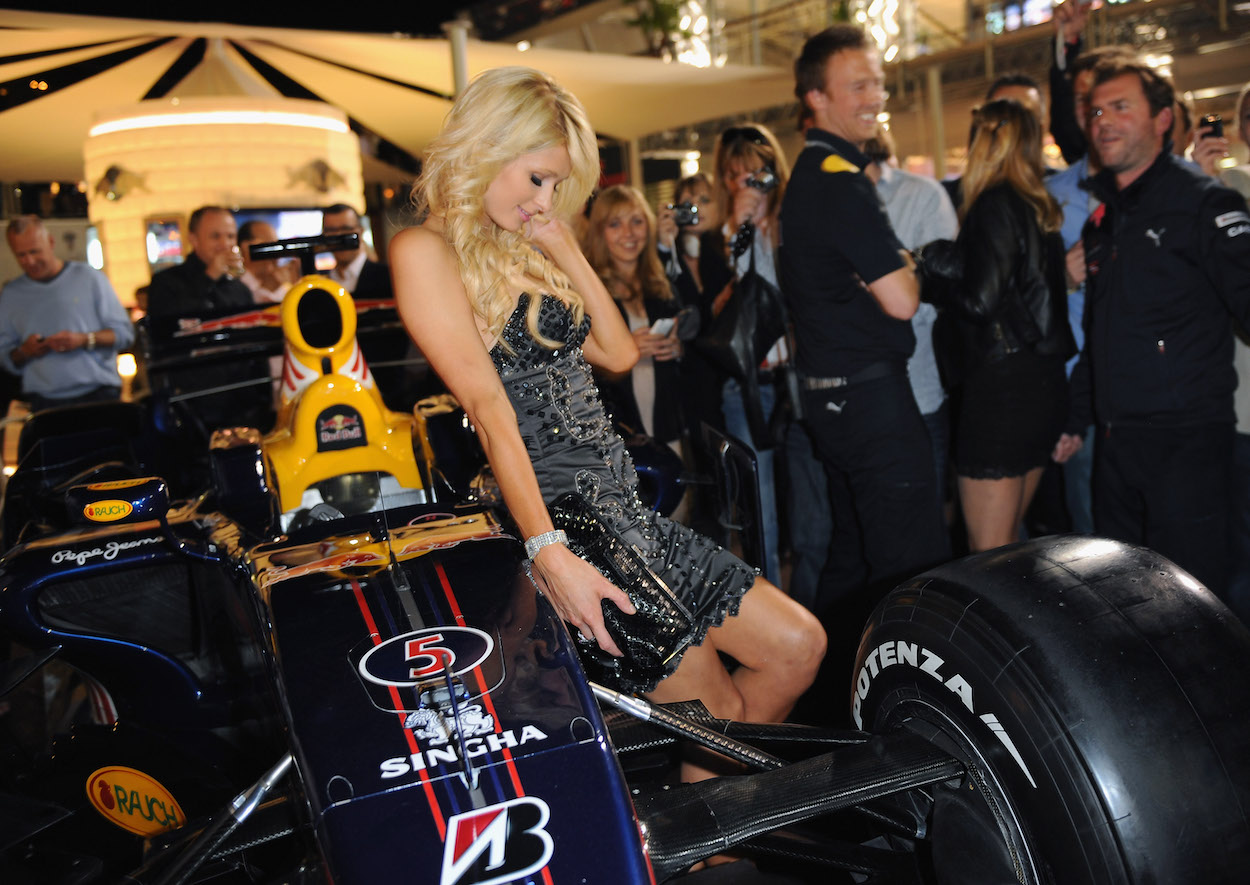 Boeri patched up his differences with the FIA and the Monegasque lawyer is now a vice-president of its World Motor Sport Council but the ACM still ended up with some concessions of its own. Exemption from paying a race hosting fee and the power to retain all trackside advertising revenues are at the top of the list.

The F1 Group’s subsidiary Allsopp, Parker & Marsh is in charge of trackside advertising at the majority of circuits on the calendar and its indirect Jersey-based parent company Beta Topco 2 usually receives all the revenues from this. Not at Monaco.

“Advertising is one of the takings which makes up, with those from grandstand ticket sales, the means to recoup the necessary funds to put on the event,” says Boeri adding that “it is true that other circuits prefer to delegate the charge of this activity. This isn’t the case with Monaco.” It pays off.

“The Grand Prix is certainly the best known Monegasque sporting event because it is the most broadcast,” says Boeri. “It has 900 hours of live television and 1.2bn viewers. For the image of the principality and its local business, it is one of the peak moments of the year.” 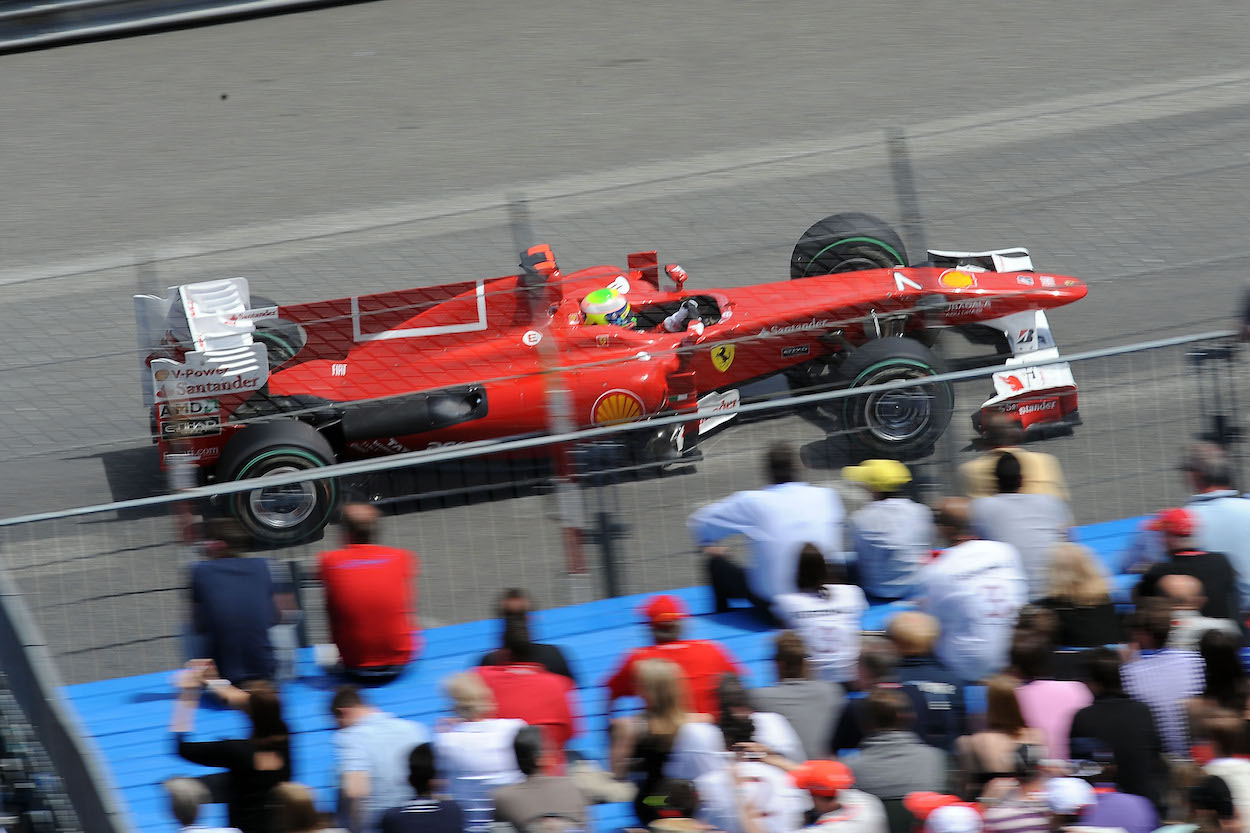 The principality has the smallest capacity of all the circuits at just 37,000 (22,000 grandstands and 15,000 general admissions) although unlike other circuits it has a significant non-ticketed attendance. “Over the four days of the event it can be estimated quite precisely that there are around 200,000 spectators who follow the Grand Prix from the grandstands, the balconies of the buildings around the circuit and also from the boats in the harbour,” says Boeri.

He adds that “of course, Sunday is the peak day: the city literally explodes. It is estimated that there are 100,000 people present in the principality which ordinarily has a resident population of 30,000 inhabitants.” They fill Monaco’s tiny 1.95sq km footprint to bursting but it is the streets, not the state’s borders, which need reinforcing.

Transforming a city into a race circuit is far from an easy task. “The construction waiting periods were reduced, to optimise business use, to six weeks of construction and two weeks of deconstruction,” says Boeri. Around 1,100 tonnes of grandstands, 900 tonnes of pit garages and 33 kilometres of the barrier are used and a permanent team of 50 Monaco engineers are in charge of the installation.

Boeri says that the toughest challenge for such a small state is “the coordination of 500 trailers which must travel into the city, during the day and night, to supply material for the construction and of course the subsequent deconstruction. To that, one can add the material delivered by the railway which doesn’t simplify the problem, but counts towards the necessary stocks.”

Once the track is in place even more workers swamp the scene. Boeri explains that “the Grand Prix puts over 600 commissaries in place to which 300 to 400 voluntary workers are added, divided between all the commissions, over 500 monitors and security service personnel, 40 first aid doctors…This list isn’t restrictive; in effect, the event lists every state service (police, firemen, crowd control police, hospital, Red Cross, Civil Engineering Department, Town Planning and Cleaning Departments), in all a total of over 3,000 people.”

These high overheads mean that although Monaco pays no sanctioning fee, keeps all its trackside advertising revenues and has ticket prices starting at $194 and rising to $958, according to Boeri “the takings from the Grand Prix are less than the expenditure.” He explains that the ACM receives a state subsidy of $7m (see box) to host the GP and with this included, the total budget for the race is around $35m.

However, the ACM’s subsidy is far from the highest on the calendar which is the $60m paid to fund F1’s other street race in Singapore. But as a result of Monaco’s unparalleled allure, the state’s $7m gets does get one of the highest returns on investment. F1’s industry monitor Formula Money estimates that Monaco’s turnover from the race is around $120m with the bordering towns, such as Menton in France and Ventimiglia in Italy, taking a total of $12m annually. Boeri says that VAT revenues largely cover the state subsidy but he isn’t complacent. Quite the opposite.

He acknowledges that Monaco needs to rev up just to stand still against the current competition of space-age circuits which cost up to $400m to build.

“If we want to survive we must, more than ever, make sure that we stay in the first bunch of Europeans, using our technical know-how, keeping the confidence of the international authorities, sponsors, car manufacturers and racing drivers, and continuing to modernise the course with the support of the Monegasque state,” says Boeri. 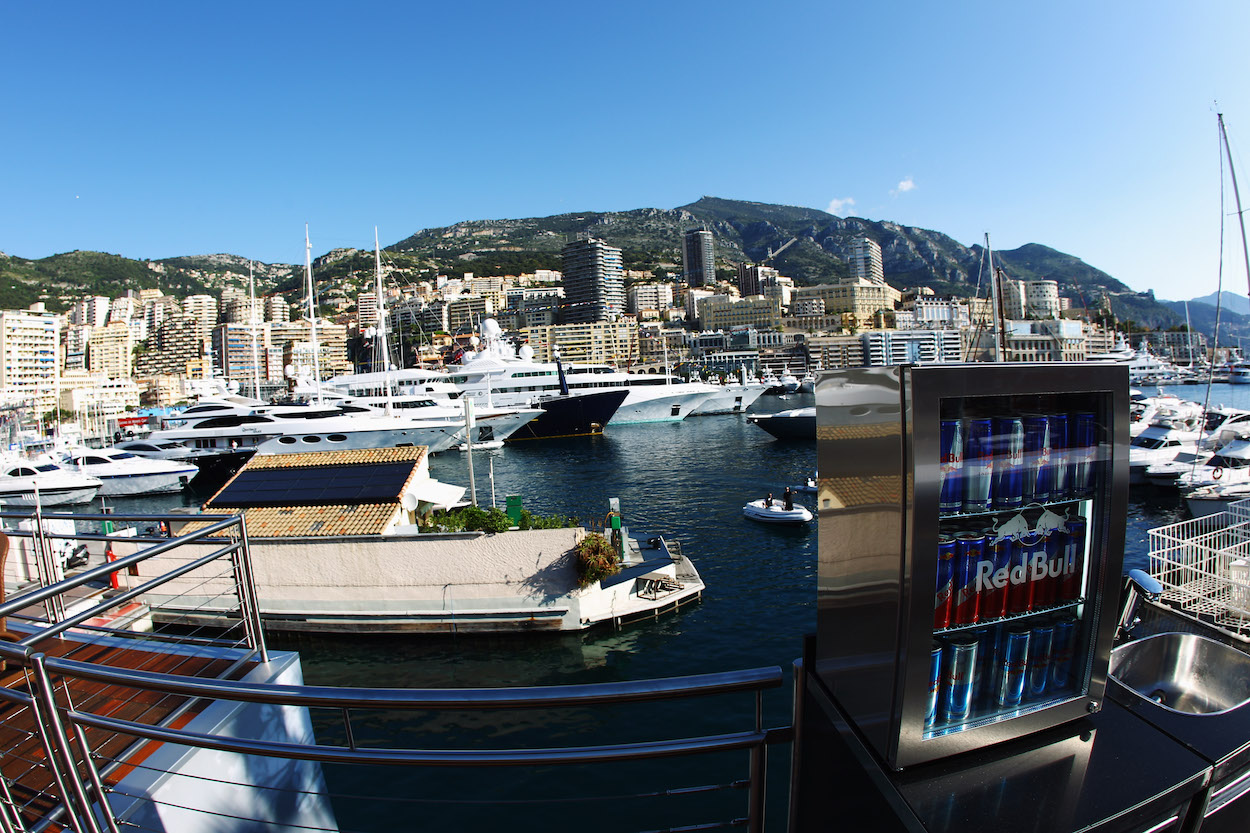 MONTE CARLO, MONACO – MAY 13: General views of the Red Bull Energy Station in Monaco harbour during practice for the Monaco Formula One Grand Prix at the Monte Carlo Circuit on May 13, 2010 in Monte Carlo, Monaco. (Photo by Getty Images/Getty Images for Red Bull) // Getty Images / Red Bull Content Pool // SI201412042972 // Usage for editorial use only //

He adds “it’s at this price, and only this price, that with a lot of work and luck, we can hope to maintain the place that is ours today. We must realise that it’s necessary to evolve, banish amateurism and select only the best in relation to their skills. We should manage, in a modern and commercial way, what has become an entertainment business, and take on board all the risks that this type of activity entails. This success then passes by government financial support.”

Even if Monaco fails to attain this goal, it still has yet another trick up its sleeve to make the most out of the GP since the cost to the state doesn’t just bring in a tangible benefit during the race weekend. Visitors come to the site of the on-track battles long after the GP has ended and Boeri says that the impact is felt “not so much during the Grand Prix period as all year round, through the number of congresses, seminars and launches, tourists and professionals choosing the principality. The impact to the economic plan is undoubtedly positive. Add to that the support of our other events: Rallye Monte-Carlo and all the historic events.”

It is a dream package of promotion for Monaco and Boeri modestly remarks that “our marketing plan is quite well balanced.” However, he cautions, “for all that, never count on anything.” With his experience in F1, there are few better equipped to deal with the unexpected.