I recently watched a most enjoyable programme on the Sky F1 channel. It was Brunswick Film’s “Review of the 1971 F1 World Championship” and what amazing memories it brought back, watching so many famous names battling it out in cars that looked exactly what many of them were at that time, a real handful to drive. Interestingly the first race of that season was at the Kyalami Grand Prix Circuit in South Africa, which I would “manage” some 9 years later.

On the grid for that first Grand Prix of 1971, 25 cars lined up. 17 of them were powered by the legendary Cosworth V8 engine, including the Tyrell of Jackie Stewart, who would go on to become that year’s World Champion. Just out of interest, after watching the race I dived into the excellent and invaluable Grand Prix Data Book so that I could calculate the average age of those 25 drivers. It was 30.48 years, compared to the 2014 average of 26.4.

I must admit that I was more surprised by the 2014 figure than I was by that of 1971. If anyone had asked me, I would have estimated the current average to have been around 24. For some reason, today’s F1 drivers seem so much younger than their counterparts from 31 years ago. In fairness though, I must say that the Class of ’71 seemed to me far more individual and were enjoying themselves so much more than those in the modern era, despite the fact that the sport was so much more dangerous then.

So why did I do this research? It was my intention to check out how much things have changed in F1 over the years and to look closely at one aspect in particular; the opportunities that exist for young drivers to progress through the ranks up to a career in F1. That’s why I put in the effort to compare some data.

For as long as I can remember, a high number of young karters and junior level single-seater racers have always had their hearts set on an F1 career. Looking back to my own FF1600 days, no less than 9 racers with whom I raced in the mid-1970s went on to become Grand Prix drivers. However, you’d have to be living on Mars not to realise that a wind of change is right now blowing through motor racing paddocks.

If you add to the cost reductions the opportunity for successful drivers in the series to move on into SuperCup and then maybe even WEC, Porsche Carrera Cup GB looks very much as if it will be the series that fills a huge void.

Reading the motorsport publications and social media comments, its blatantly obvious that a growing number of young racing drivers, many supported by their parents, are recognising and becoming frustrated by the fact that the chances of them ever reaching F1 are not dissimilar to those of winning the Euro Millions Lottery. They are aware that it’s not just about talent anymore. It’s always been tough, of course, but they are seeing those odds getting worse by the day. Sadly, the F1 financial and political debacles during 2014 have done little to change the minds of the business world that investment into F1 has become high risk. As a direct result of this, sponsorship has become increasingly difficult to secure.

For those pursuing a career as a professional race-driver, that’s bad news. However, as they say, every cloud has a silver lining! Let me explain what I mean.

What I’m witnessing right now is an increasing number of talented young drivers who are looking for a realistic change of direction; a change that can offer them a sustainable career outside of F1’s rarefied atmosphere. They are rapidly coming to the conclusion that sports car racing is the direction in which they should be heading.

How do I know this? Well in the process of my recent work with two very talented and successful young drivers, I’ve seen for myself the disillusionment that exists amongst so many youngsters who have battled to reach the outer extremities of F1. The realisation comes hard to them that talent now seems to have as little to do with achieving a drive in F1 as it does of being a Lottery winner. To add to their angst, it has also become obvious that there is a declining respect within the business world for their chosen sport. It’s failing to offer a feasible platform for companies to build cost-effective sponsorship strategies, capable of delivering a measurable return on investment.

So where’s the silver lining that I mentioned? It became apparent to me as a result of trying to help the two drivers that I earlier referred to, both of whom, for different reasons, were becoming frustrated with the way in which the single route to F1 was failing them. The silver lining that we discovered is an existing series that has been revitalised for 2015 and offers a cost-effective route to a professional career at the highest level. I refer to the Porsche Carrera Cup GB 2015.

So just what is so special about it? Well, for a start, if a driver has the talent and the determination it can provide a route that might ultimately take him (or her) to a well-paid career as a factory supported driver in the LMP1 category of the World Endurance Championship. If you don’t believe that this can be just as satisfying as an F1 career, ask Alan McNish, Mark Webber and Tom Kristensen, amongst many others.

Like a lot of people, I’ve seen the Porsche Super Cup cars competing many times on the Grand Prix circuits of the world, as a support event to F1. I must admit that I never looked upon Super Cup as anything other than a really entertaining event with high-speed, thrilling dices right through the field. Then I was lucky enough to be invited to the last two Rounds of this year’s Porsche Carrera Cup GB at Silverstone and Brands Hatch (on the GP Circuit). It was a real eye-opener!

In the process he has become a role model for many other young drivers, disenchanted with the closed shop that is the route to F1.

For a start, Porsche Carrera Cup GB is a key part of the TOCA package, which includes the BTCC and Formula Ford National championships, ensuring superb attendance figures at nearly all of the Rounds. It also offers live TV coverage of the races throughout the season on ITV4. Both of these are high-value factors when talking to potential sponsors.

As the years pass by, I have to admit that the hospitality offering at sports events becomes increasing relevant to me, so when I caught sight of the stunning Porsche Carrera Cup facility, which accompanies the series around the various tracks throughout the season, my mood perked up even more, as did my wife’s. The level of spectator expectation is increasing across most sports and yet I have to say that in many cases motorsport hasn’t yet come to terms with this. Believe me, it’s one of the first questions that sponsors ask when discussing an involvement….no embarrassment on this front with Carrera Cup.

It has to be said that if the racing is of poor quality, then everything else pales into insignificance and although not the biggest grid on the day, the Porsche Carrera Cup races provided some great action and are particularly spectacular at high-visibility, undulating circuits like Brands Hatch. 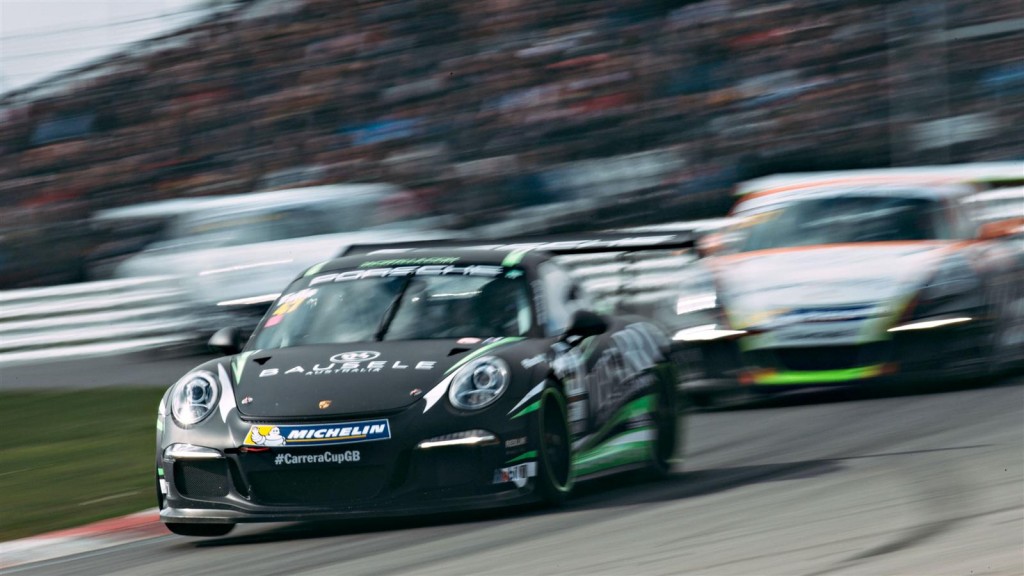 What I found extremely encouraging was to see 20-year old Josh Webster, who raced with the Status GP3 Team in 2013, win the Porsche Carrera Cup championship this year. In the process he has become a role model for many other young drivers, disenchanted with the closed shop that is the route to F1.

I was recently invited to Porsche’s GB Head Office in Reading to meet Ragnar Schulte, Porsche’s General Manager / Marketing and his motorsport team. To his credit he has realised the tremendous potential being offered to Porsche by the many issues facing single-seater racing at present. He’s seized on this, determined to build Carrera Cup GB 2015 into something very special. Several impressive cost-cutting initiatives are being introduced, combined with a significant increase in prize money, to encourage the generation of young racers who no longer see F1 as the Holy Grail when it comes to building a professional career. Assistant Motorsport Manager Darioush Gheissari explained to me that an important ingredient for 2015 is the introduction of an innovative Rookie Championship category for drivers under 24, with a £50K prize for the overall winner. The overall prize fund for 2015 has been doubled!

I’m delighted to report that in my subsequent discussions with a few of the Carrera Cup Teams it became obvious that the cost reductions being introduced by Porsche are in turn being passed on to potential customers. With budgets for 2015 being quoted at around a third of what GP3 and F3 teams are now charging, it’s hardly surprising that so many disenchanted young single-seater stars are looking seriously at embarking upon a career as a professional sports car racer. This is reflected in a huge surge of interest being reported by all of the Carrera Cup teams. It looks as though not only will we be seeing large grids for 2015, but a rise in the number of young, ambitious professional drivers arriving from other categories.

If you add to the cost reductions the opportunity for successful drivers in the series to move on into SuperCup and then maybe even WEC, Porsche Carrera Cup GB looks very much as if it will be the series that fills a huge void. It’s a void seemingly created by the total inability of the single-seater powers that be, including F1, to control and structure their own categories into a semblence of a “product” that the commercial world finds attractive.

The change of attitude and direction by many of today’s young drivers shouldn’t come as a surprise… the writing has been on the wall for a long time.