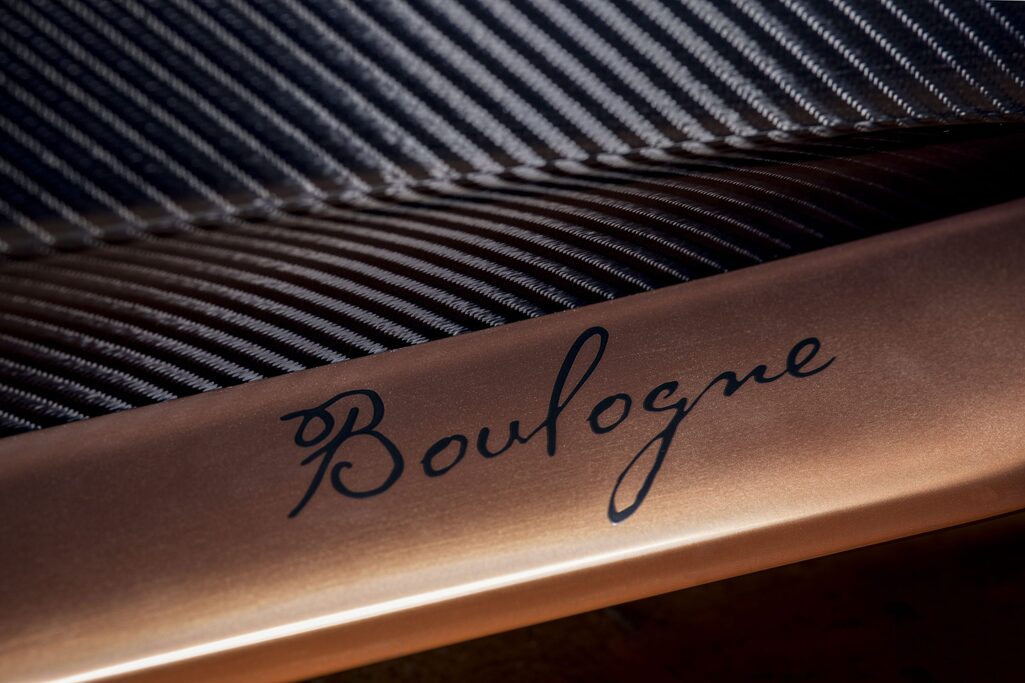 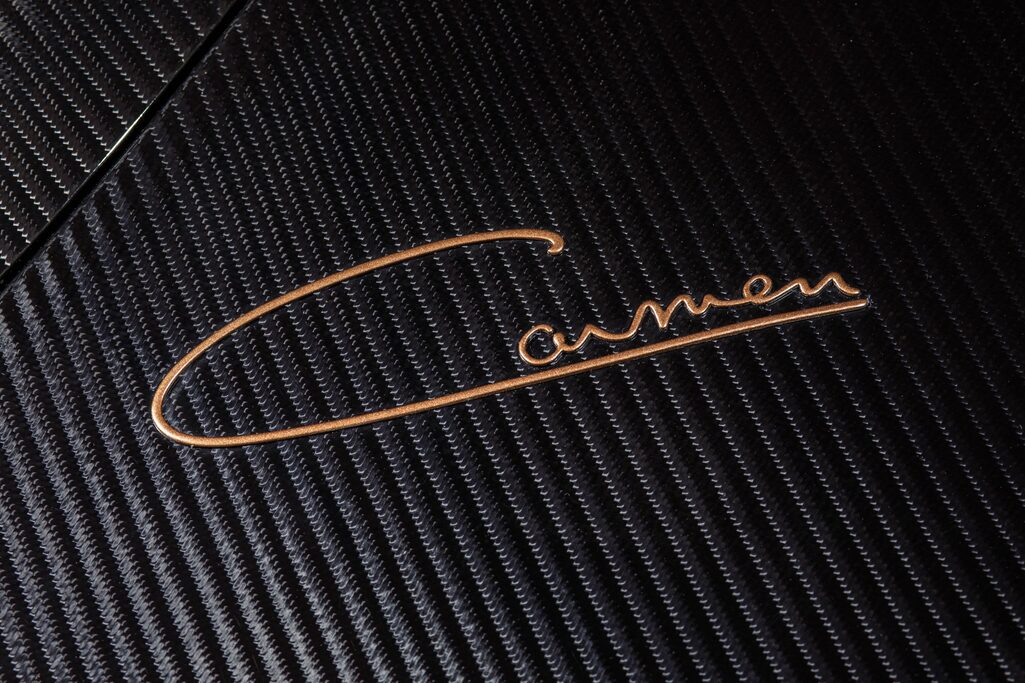 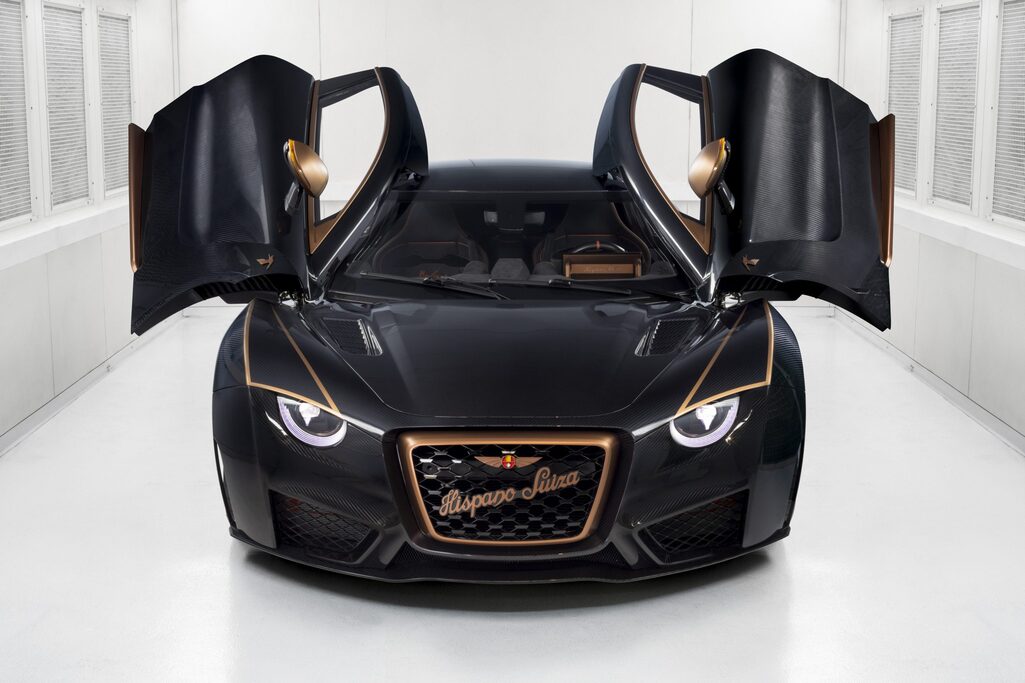 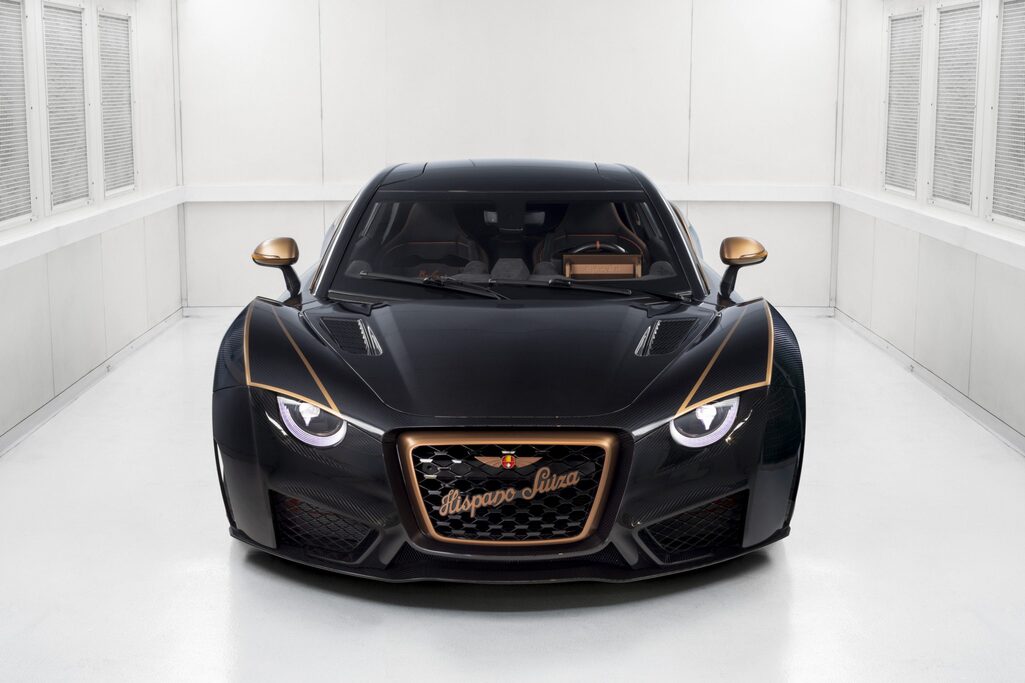 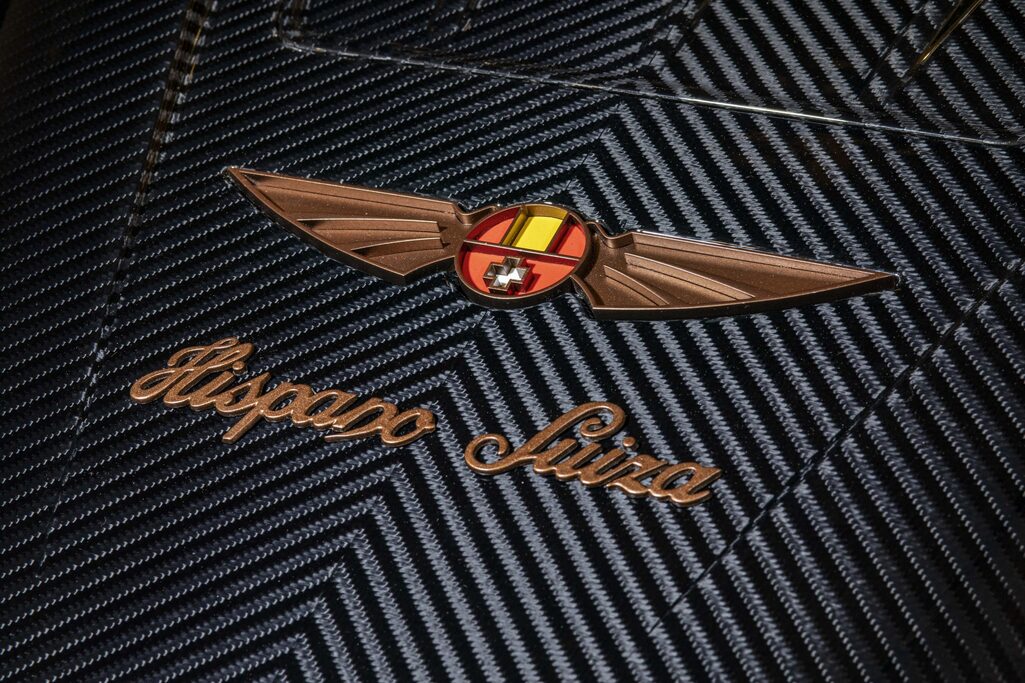 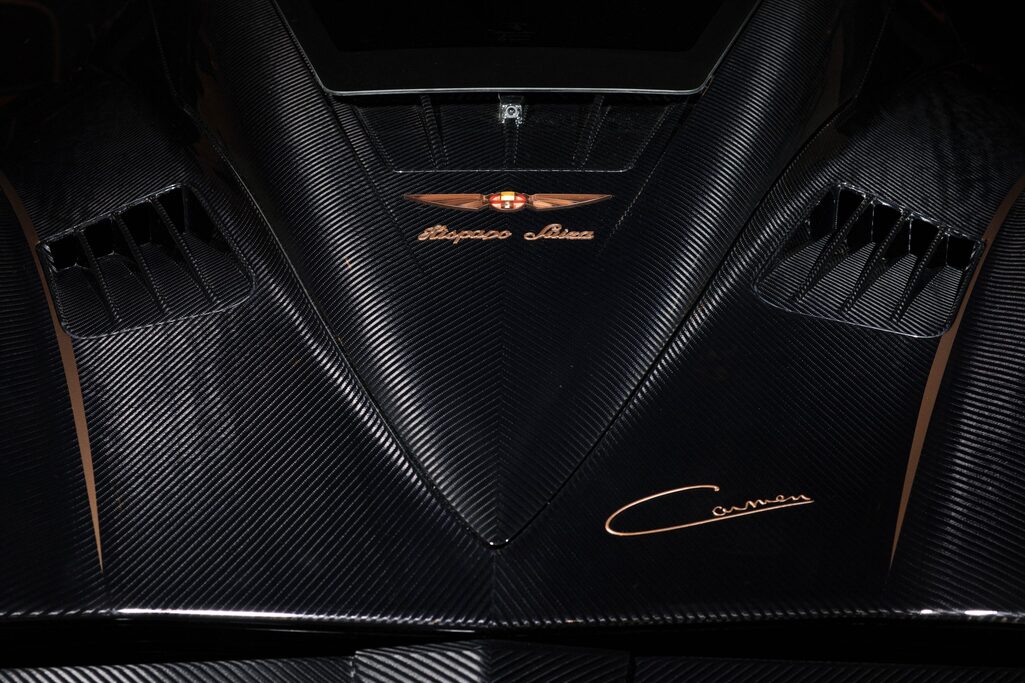 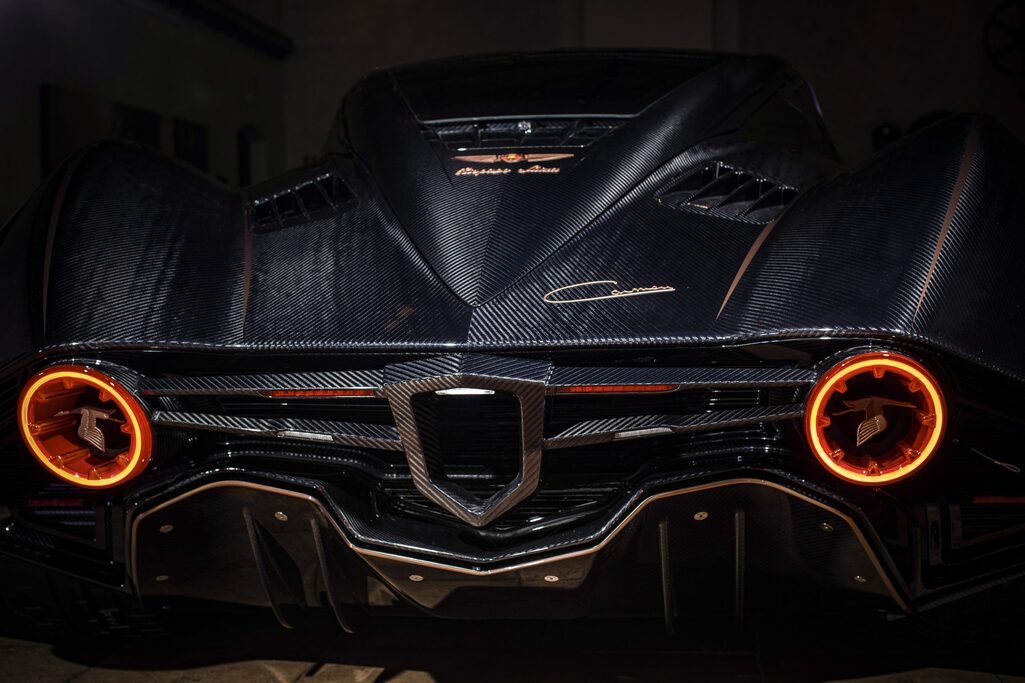 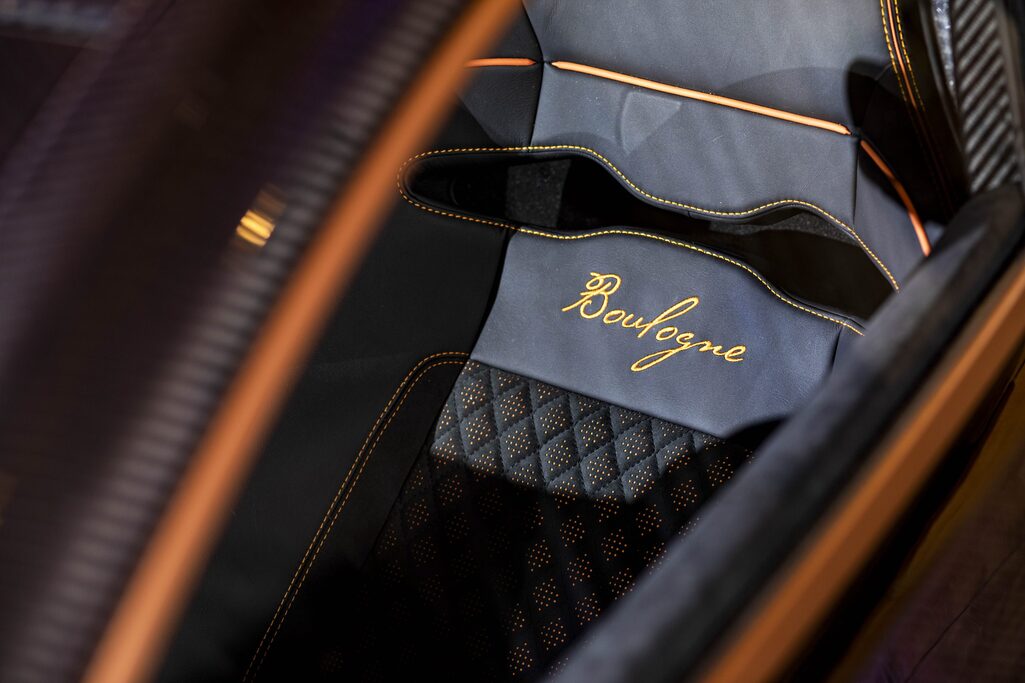 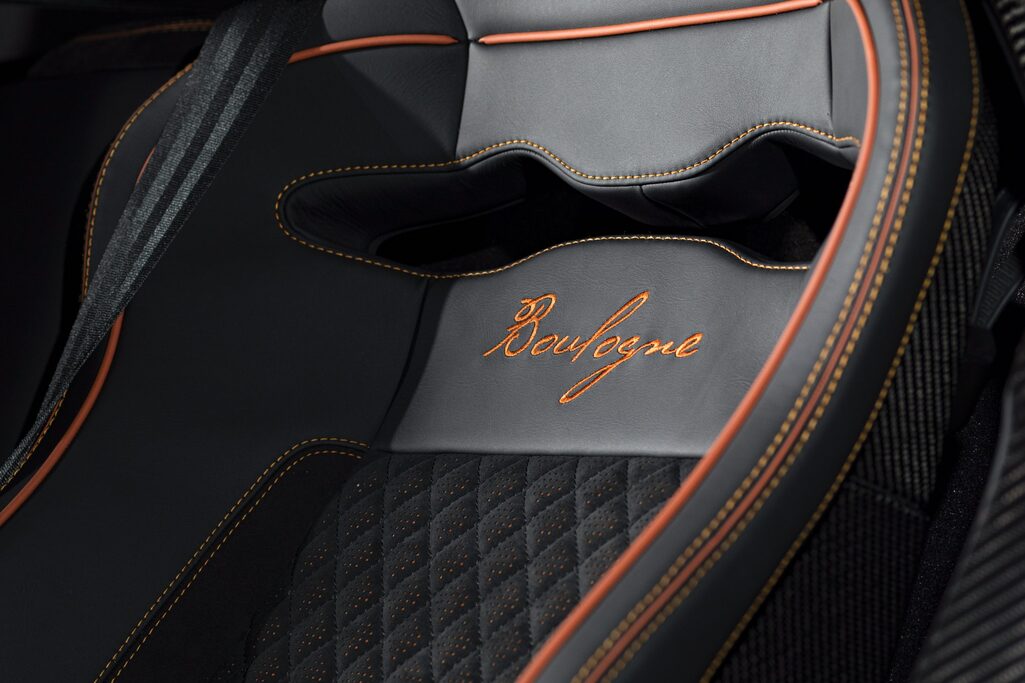 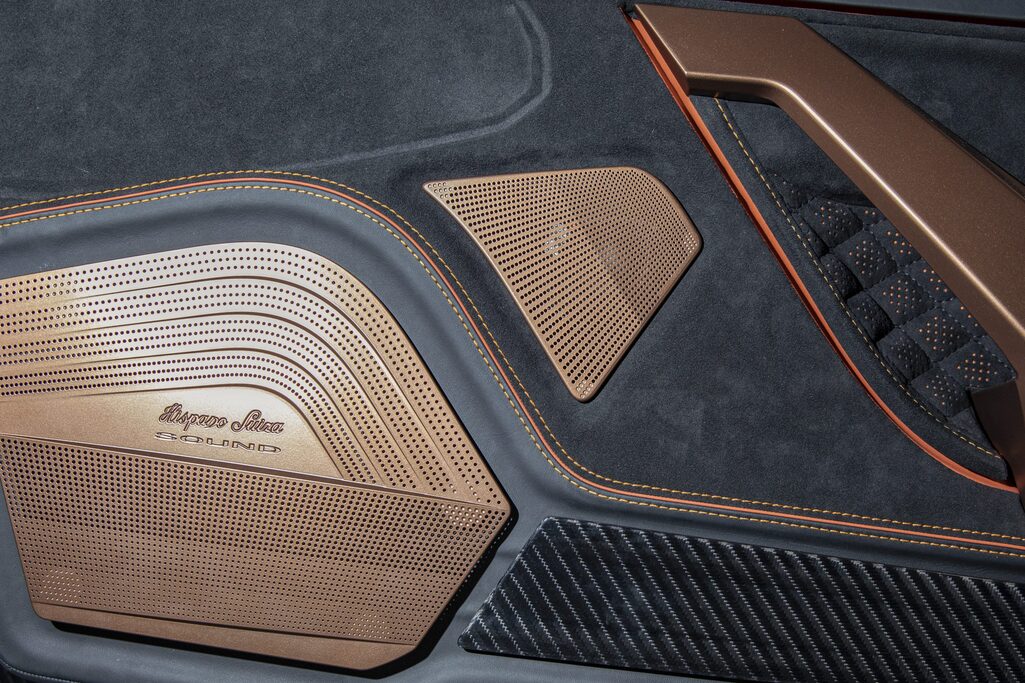 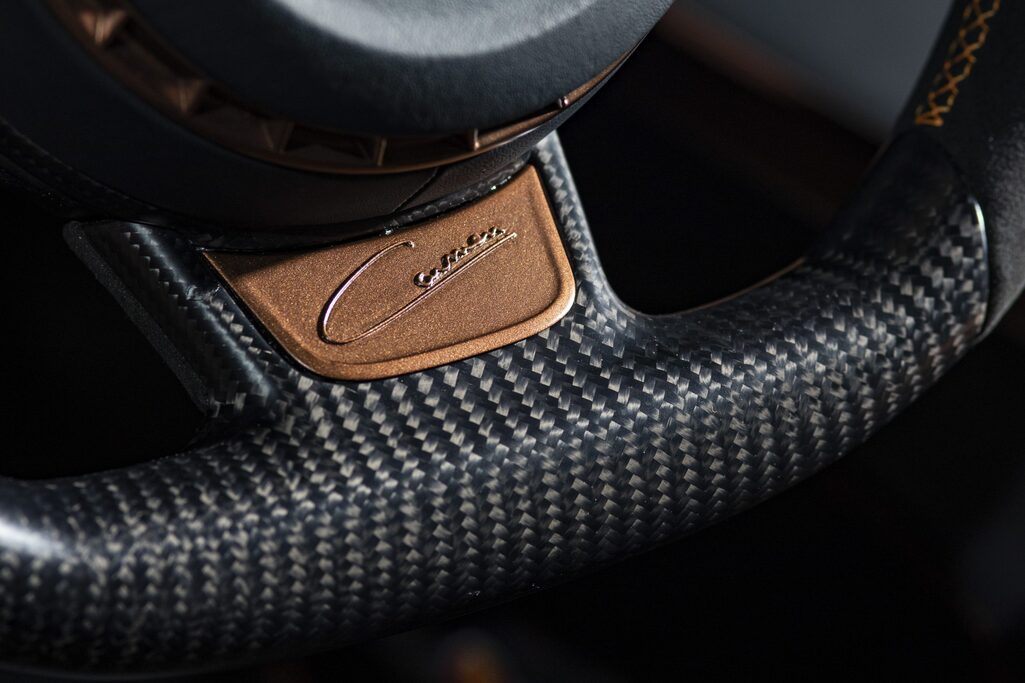 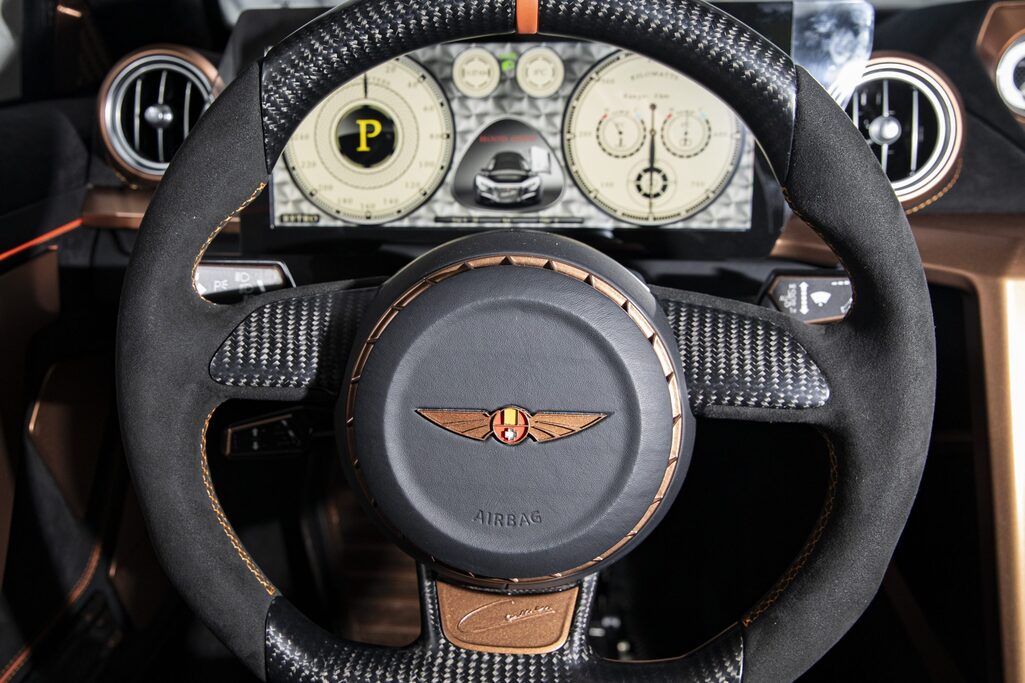 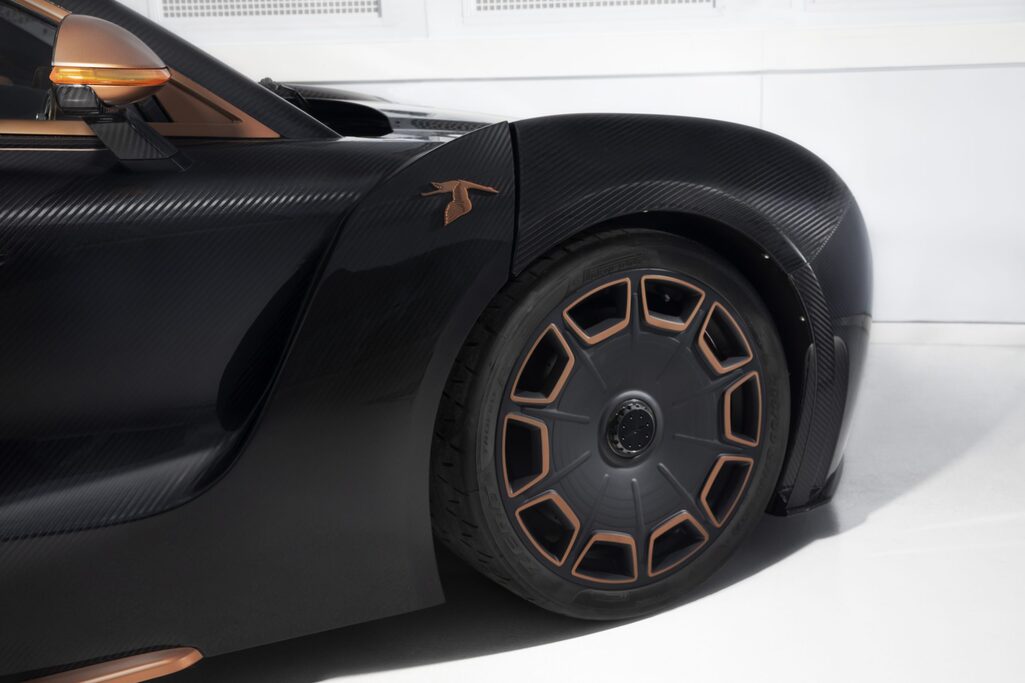 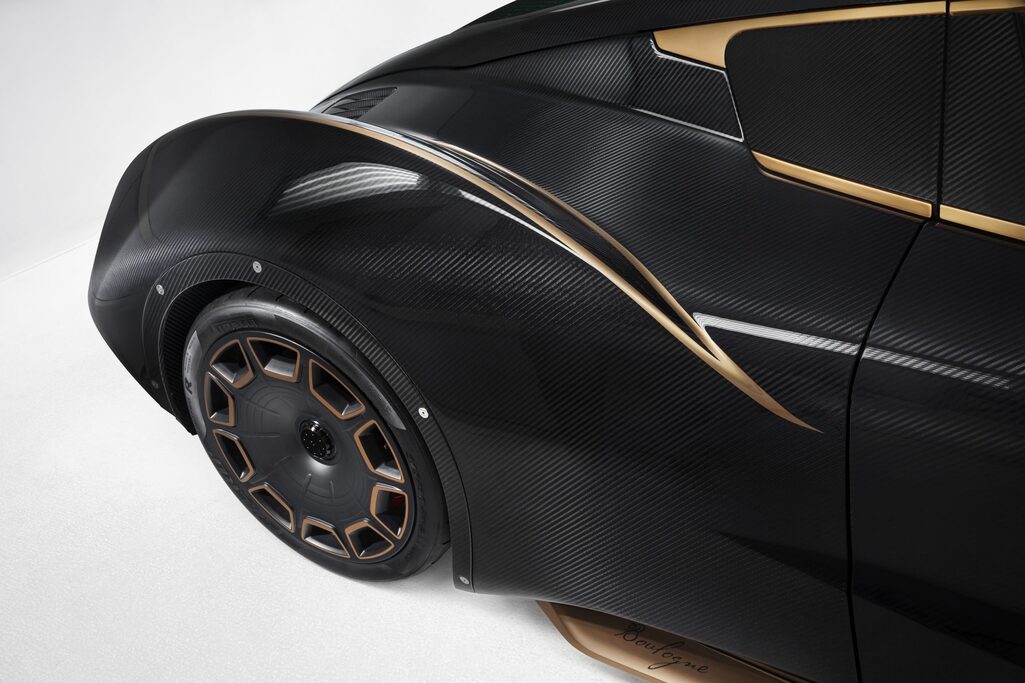 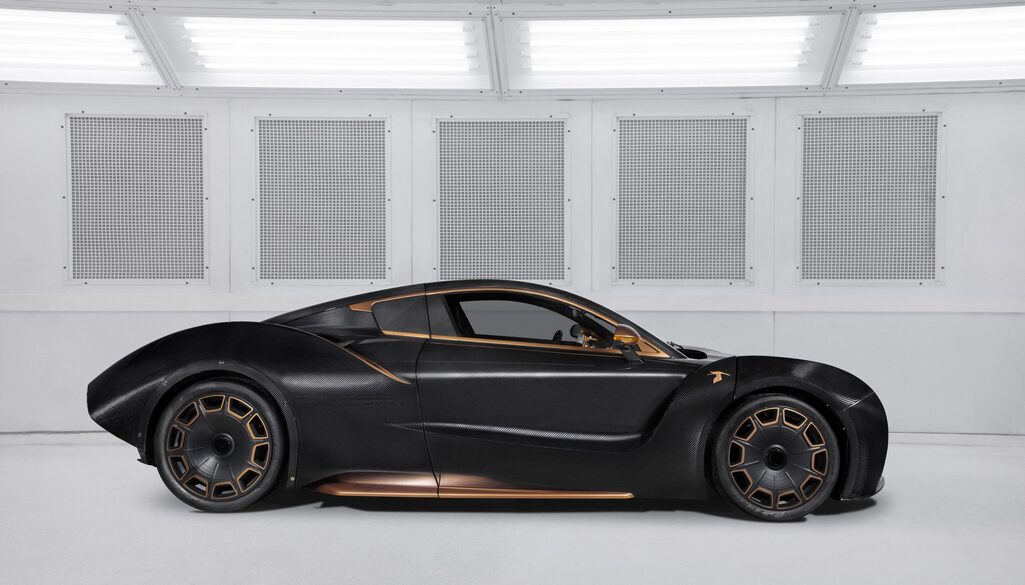 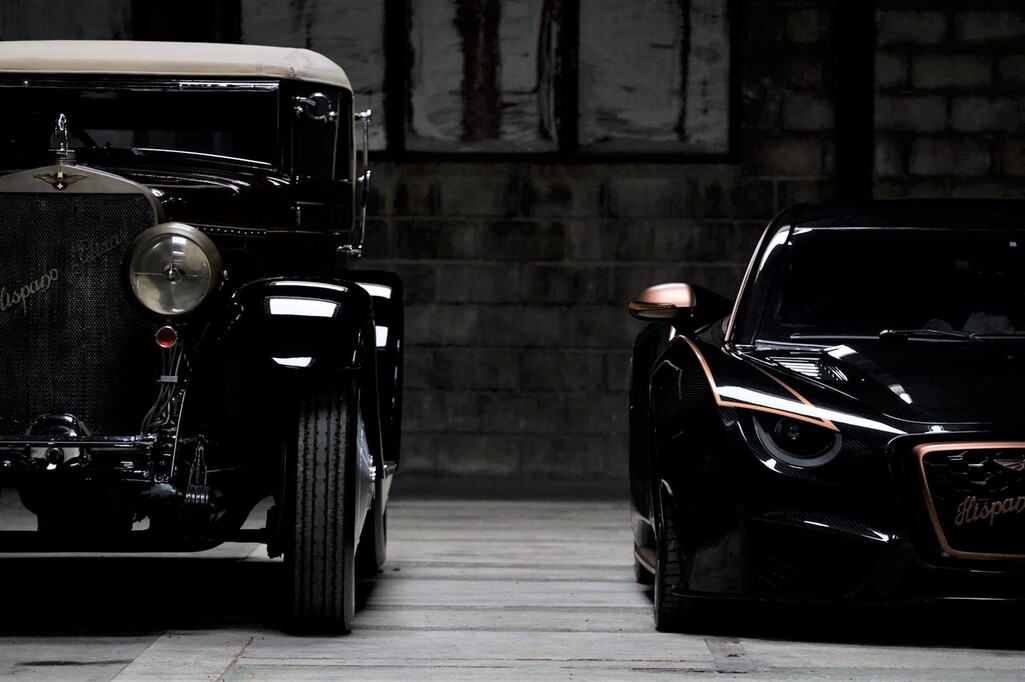 Hispano Suiza built more than 12.000 luxury cars between 1904 and 1946. Its emblem, the stork, pays tribute to the squadron emblem painted on the side of a Hispano-Suiza powered fighter aircraft that had been flown during World War I. Its current hypercars, 100% electric, maintain the values which converted Hispano Suiza into a legend.

The Hispano Suiza brand renaissance dates back to March 2019 when it unveiled a true work of art on wheels at the Geneva Motor Show: the Carmen. The luxury hypercar, which defines the “hyper luxe” segment, instantly became one of the most coveted attractions of the Swiss exhibition. The Carmen shares the same DNA that turned Hispano Suiza into a legend and a source of pride for the Spanish automotive industry.

Hispano Suiza was founded on June 14, 1904, by Damián Mateu, with the support of engineer Marc Birkigt, a Swiss who had come to Spain to revolutionise the automobile industry, and who had worked on the two predecessors of Hispano Suiza: La Cuadra and J.Castro. Since the beginning of the century, Birkigt had worked on the development of 10 and 14 hp vehicles, which formed the foundations of the company and were delivered at the end of the same year.

A few months later, in 1905, Hispano Suiza produced its first vehicle, the armoured type Birkigt system, which was equipped with a four-cylinder engine and delivered 20 CV of power, with a top speed of 87 km/h. It was followed, a year later, by what would be the first car with a six-cylinder engine built in Spain, a model delivering 75 HP of power that came to complete the Perpignan-Paris route in 22 hours, a feat that received a great deal of media attention.

Hispano Suiza began to grow, set up a factory in France and sold the manufacturing license to other manufacturers in the United Kingdom, Italy and the former Czechoslovakia, which contributed to its expansion throughout the world. Little by little it began to rival the great manufacturers of the time and became synonymous with luxury and high society.

Its cars caught the attention of King Alfonso XIII, a car enthusiast. The monarch gave notable national and international visibility to Hispano Suiza and came to play an important role within the brand. So much so that a car was named after him, the T45, or “Alfonso XIII”.

The Hispano Suiza stork
During World War I, Hispano Suiza focused its efforts on manufacturing aviation engines, putting into practice all the experience acquired in the automotive industry. It was an important period for the company, which prospered. Even today, its legacy as a successful manufacturer of aeronautical engines (more than 50,000 units were produced) is still present in Hispano Suiza vehicles, through its legendary logo: the stork. The stork, pays tribute to the French squadron emblem painted on the side of a Hispano-Suiza powered fighter aircraft that had been flown during World War I. Together with the Spanish and Swiss flags, it has become the trademark logo of the manufacturer.

The first model to sport the silver stork was the H6B, a revolutionary vehicle with a 6-cylinder engine, with a top speed of 150 km/h. This car holds an important place in the history of the brand since it was behind its wheel that André Dubonnet won the George Boillot Cup, an endurance race held in Boulogne (France). His Majesty King Alfonso XIII himself also drove an H6 to compete in the “Cuesta de las Perdices” race, in the outskirts of Madrid. This type of racing subjected the brand’s vehicles to a demanding test, which they passed with flying colours, thus becoming synonymous with reliability and high performance.

Dubonnet himself would play an important role for Hispano Suiza over the following years. In 1932 the Dubonnet Xenia was unveiled at the Paris Motor Show. The vehicle, based on the H6B, incorporated the independent suspension system designed by Dubonnet himself, where leaf springs had been replaced by coil springs. In 1936 a second version was launched, even more aerodynamic and spectacular than the first one, with sliding doors, wraparound windscreen, futuristic lines and a Hispano type 68 bis 12 cylinder engine delivering 250 hp.

After the Spanish Civil War, Hispano Suiza continued to develop increasingly powerful engines and vehicles, with an even more exclusive design, such as the T60 or the K36. The company was restructured and divided into three areas: one dedicated to aviation and military equipment, another to cars, trucks and buses, and a third one focused on machinery and tools. In 1953, after a number of financially challenging years, and after the nationalisation of “La Hispano-Suiza, Fábrica de Automóvil, SA”, the dream started by Damián Mateu and Mark Birkigt at the beginning of the century was put on hold.

Over the years, Hispano Suiza became synonymous with luxury and exclusivity, only available to a selected few. Hispano Suiza cars belonged to aristocrats, intellectuals and the most renowned artists in the world. Its list of illustrious clients included: Alfonso XIII of Spain, Gustavo V of Sweden, Carlos II of Romania, Luis II of Monaco, Pablo Picasso, André Citroën, Coco Chanel, René Lacoste or Albert Einstein and more recently Paul McCartney, to name but a few.

Hispano Suiza automobiles have always been closely linked to high net worth individuals with an exquisite taste for bespoke luxury and a genuine passion for cars. Today, classic Hispano Suiza vehicles are preserved with great care in museums and private collections around the world.

A new era: the new meaning of luxury on wheels
Hispano Suiza is now back on the automotive scene, with an extraordinary project led by Miguel Suqué Mateu, great-grandson of the founder, who keeps alive the legacy of the brand. Belonging to the Peralada Group, Hispano Suiza was relaunched in 2019 at the Geneva Motor Show, when it showcased a fully electric, truly breathtaking vehicle: the Carmen. This exclusive 1,019 hp model has been designed, developed and built entirely in Spain. Its exterior is inspired by the classic Dubonnet Xenia and shares the values ​​that converted Hispano Suiza into one of the greatest exponents of the luxury automotive industry, with timeless design, meticulous craftsmanship and scrupulous attention to detail. Its most radical version, the Carmen Boulogne, arrived the following year, in 2020. The Carmen Boulogne delivers 1,114 hp and pays tribute to Dubonnet´s victory in France.

Personalisation is also an important part of the brand’s DNA: no two Hispano Suiza are the same. Each of the vehicles that leave the factory can be configured in a multitude of options, both exterior and interior, with state-of-the-art materials and meticulous attention to the buyer´s wishes. Only 19 Carmen models, 5 of which will be the Boulogne version, will be built in this limited and exclusive production run.

Motor racing has always been part of Hispano Suiza´s DNA. The Carmen is, in its essence, a vehicle featuring Formula E competition technology, which combines outstanding performance, reliability and power with one of the best electric platforms in the world. The motto From Race to Road is the basis of Hispano Suiza´s DNA. Likewise, Carmen Boulogne is a sportier evolution of the Carmen that reflects the racing heritage of the brand. 2021 marks the 100th anniversary since Hispano Suiza’s victory in Boulogne, and the brand has announced its plans to participate in the Extreme E Championship with its own team, HISPANO SUIZA XITE ENERGY TEAM. A 100% electric off-road vehicle delivering more than 500 hp of power, will take part in one of the most exclusive races in the world. The Extreme E Championship focuses on three main pillars: the sustainability of the planet, electromobility and gender equality, values that Hispano Suiza shares unreservedly.