The main categories of auto racing

Whether you’re new to the sport or a long-time fan, there’s no question that keeping the main categories of auto racing straight can be difficult. So what exactly is a stock car, and how is that different from a production car? To help you answer this and more, we’ve put together this quick rundown of the world’s most popular forms of racing.

Formula racing is the most popular form of car racing right now. Formula One races like the Monaco Grand Prix, the Canadian Grand Prix, and the IndyCar Series are among the most prestigious racing events in the world.

The name “formula racing” comes from the regulations (or formulae) initially imposed on the sport by the FIA. Formula race cars are of the single-seat, open-wheeled variety; the wheels are outside the car’s main body.

Formula One events take place on both roads built for the purpose of the race and temporary street circuits. F1 cars can go up to 240 miles per hour, but twisty roads often keep speeds down to half that. IndyCar uses a combination of high-speed ovals, temporary street circuits, and road courses. On ovals such as the Indianapolis Motor Speedway, IndyCars average about 230 mph. Like F1, speeds are much lower on the street courses.

The term “stock car” originated in Prohibition era-America, when moonshiners would soup up stock vehicles to maintain a normal appearance but with the ability to outrun authorities. It was inevitable that these cars would end up racing, giving birth to organizations like NASCAR. There is little about these cars today that is “stock,” and just imagine trying to find inexpensive car insurance for them, but stock car racing has grown to be a major force.

The cars built for these races still resemble stock automobiles but are heavily modified for speed and safety. Stock car races take place on oval tracks. On famous speedways like Talladega, Daytona, and Charlotte, cars reach up to 200 mph.

Cars racing in the 24 Hours of Le Mans can go up to 227 mph, which indicates the speed prevalent in sports car racing.

Auto racing is all about competitions full of extreme speed and excitement. No matter under what race categories, winning the race weighs much more than enjoying the competing process. In this case, it’s obviously crucial to find the right trophy or awards for the top winning drivers or participants and memorize their special moments. GS-JJ offers custom race medals with free artwork systems that would be ideal for any motorsports event, club rally show, or anniversary race.

If you want to buzz your event, go with your cool and unique race medals at GS-JJ! 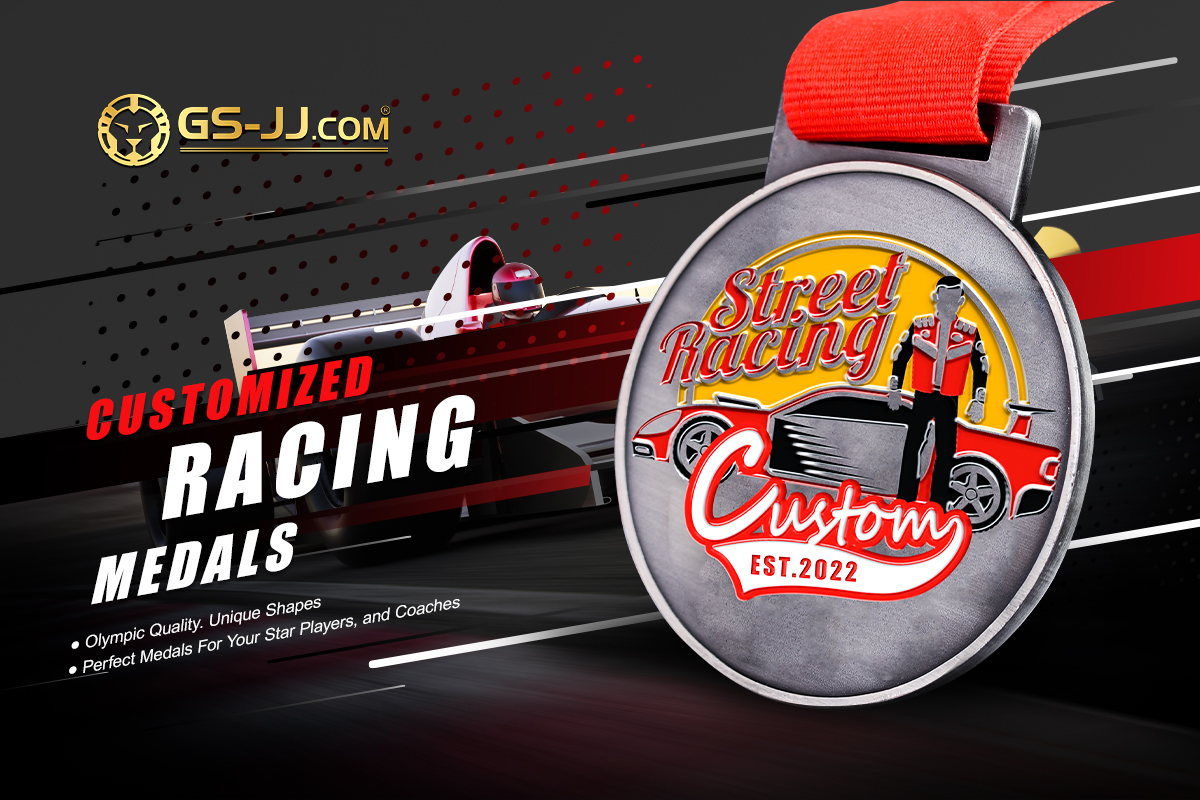 Popular in the UK, Europe, and Australia, touring car racing utilizes production-derived race cars. Although the vehicles come from various manufacturers, they are typically made with similar performance specs. The even playing field is one of the aspects of touring car racing that fans enjoy the most.

Like stock car racing, most touring car rules require that the cars start with a standard body, but every other component can be modified and optimized for racing. As the races take place on road and street courses, the top speeds are lower than those seen on dedicated tracks, topping out at approximately 160 mph.

Some of the more popular events in touring car racing every year are the World Touring Car Cup and the British Touring Car Championship.

Although these four categories are among the most popular in the world, there are many different types of auto racing with a large fanbase:

As the name implies, production car racing sees unmodified (or very slightly modified) production cars race each other. Known in the US as “showroom stock,” this is seen as one of the most economical forms of auto racing.

The most common modifications to these cars are the addition of a protective roll cage and using race tires.

Also known as single marque, one-make racing can involve the same types of cars from one automotive manufacturer or even a single model. The defunct North American competition International Race of Champions (IROC) was one such race and is the origin of the Chevrolet IROC-Z Camaro.

Today, the international Porsche Supercup is probably the most famous example of one-make racing, with drivers competing in identical Porsche 911 GT3 Cup cars.